YUNGBLUD on his first real heartbreak, his lifelong fight for 'liberation and love,' and how 'the gatekeepers lost control' 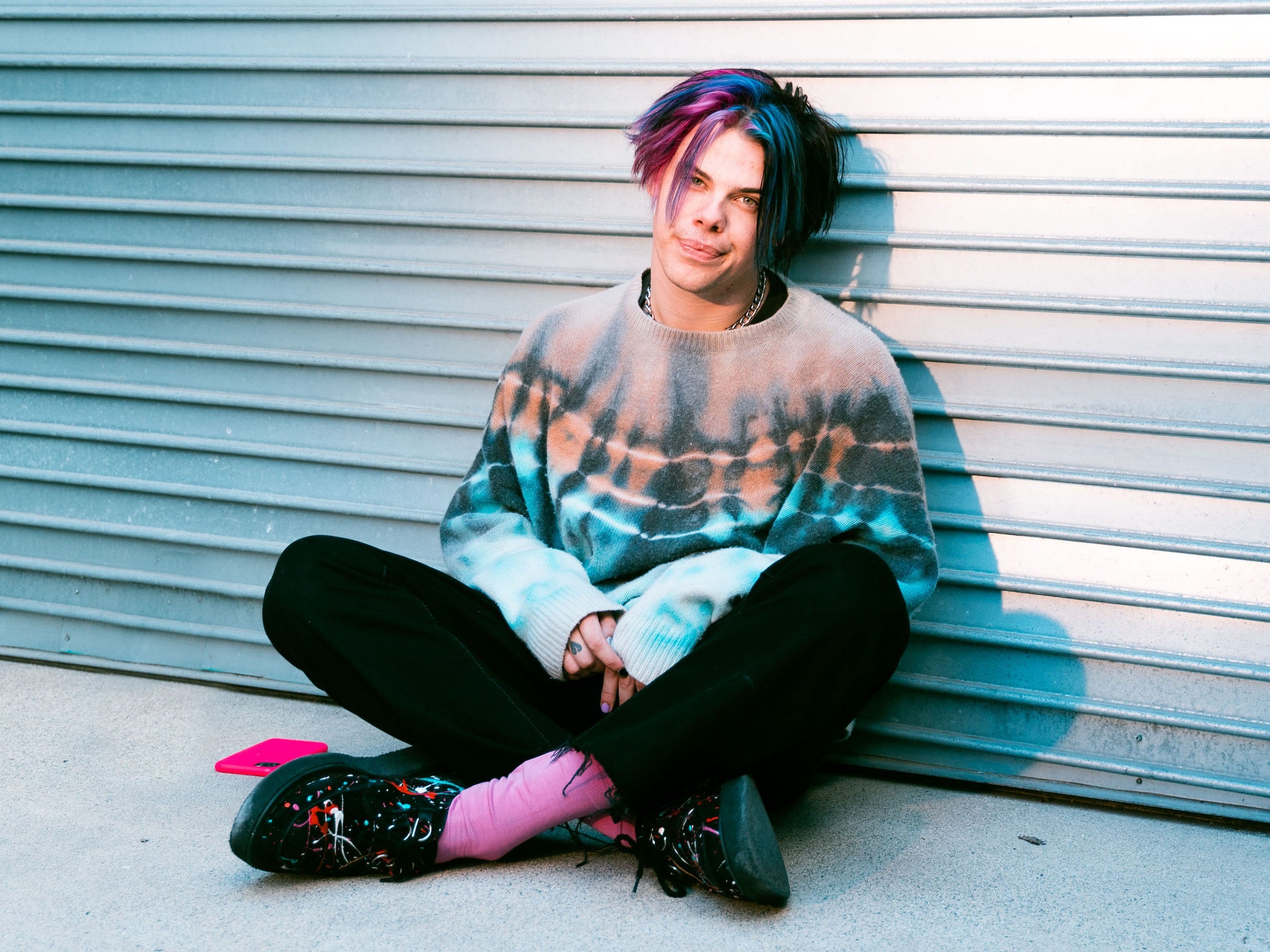 Insider launched the Stay Insider Sessions to connect with musicians while they, like many of us, are grappling with isolation and unprecedented downtime. Next up: YUNGBLUD.

After riding out the most volcanic, unpredictable 18 months of his entire life, YUNGBLUD retreated to his grandfather’s house in Spain late last year. He built a shiny new recording studio in the basement, eager and determined to create a perfect musical translation of his current emotional state.

Then, he recorded his newest anthem “Weird!” almost entirely with an iPhone.

I counter: Well, when you’re surrounded by state-of-the-art recording equipment, not generally.

“It sounded lo-fi and naive and full of contradictions and bright,” he explains breathlessly, “and that was what was exciting about it.”

“‘I want luck, I want love, sharing earphones on the bus and wake up next to you in Glasgow,'” he continues, quoting the song’s second verse. “That’s kind of my idea of what it means to be loved. If I was to paint a picture of a kind of love I want, it’s that.”

“I imagine an indie alternative couple. You know what I mean? Boy-boy, girl-girl, boy-girl, they-they, whatever you identify as, sitting together on a rainy bus, and it’s so hot inside that the windows are foggy, and they’re sharing earphones, listening to music.”

I offer: Like a scene in a coming-of-age movie. 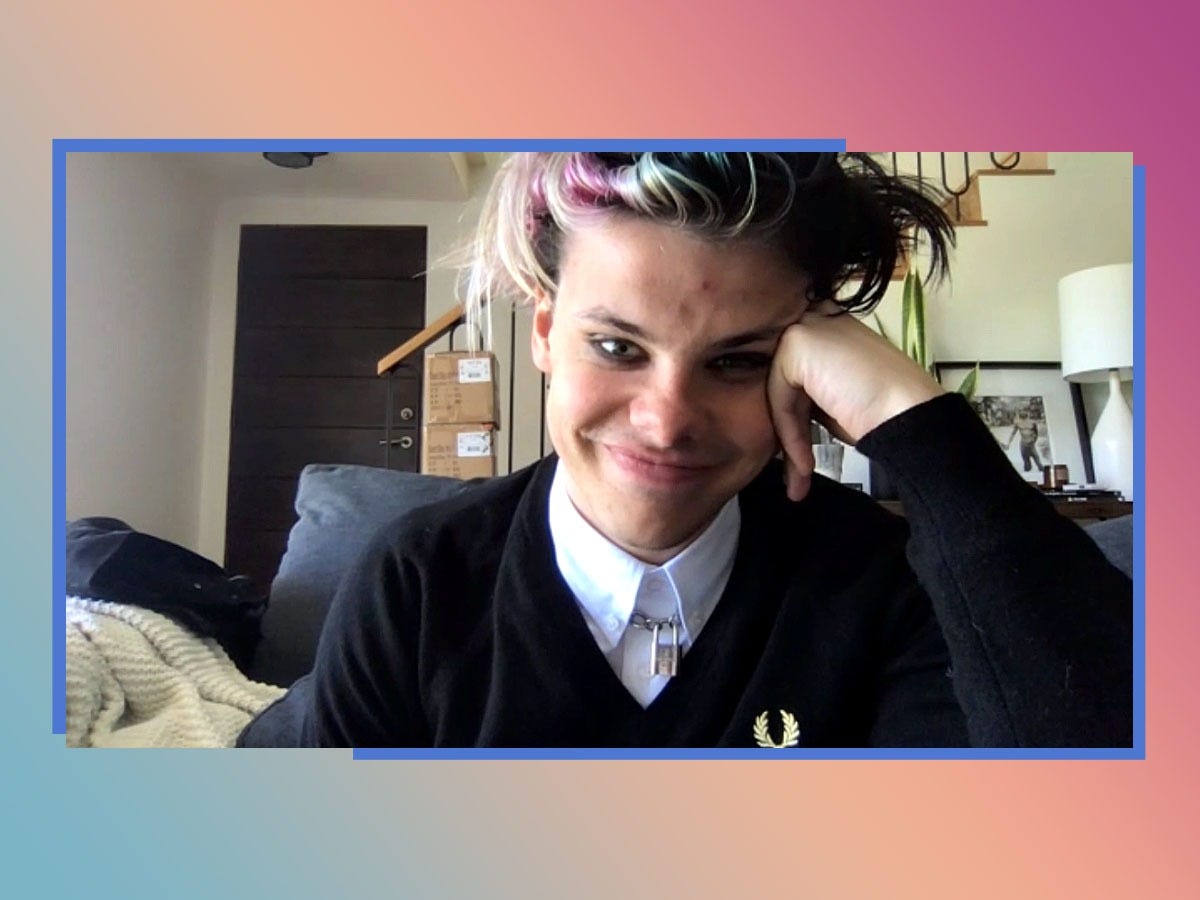 Callie Ahlgrim/InsiderYUNGBLUD during a recent Zoom call with Insider.

Based on my experience, “You know what I mean?” is a common refrain during any conversation with YUNGBLUD – aka Dominic Harrison, the 22-year-old spitfire who’s captured many young, rebellious, kindred-spirit-craving hearts.

When Harrison adopted the stage name as a teenager, he felt angry and misunderstood. He wanted to wear makeup like Lou Reed and pink like Vivian Westwood. He had a punkish, ’70s rock n’ roll spirit oozing through his pores, but didn’t feel like it was “cool” or accepted.

“I had spent so much time being told that I was better to be seen and not heard. So with my music, I just called out, ‘Is anybody out there? Is there anybody out there to relate to me and have a conversation with me?’ It turned out there was a lot of f—ing people out there in the end,” he explains, grinning.

‘I didn’t know what was real and what wasn’t’

Harrison’s stratospheric rise as YUNGBLUD coincided with some major life events that would be jarring by any standards – but certainly more so when you’re forced to cope in public, with paparazzi following you down the street.

His debut album “21st Century Liability” was released via Interscope records in 2018. Its “filthy, bratty” attitude was met with glee from his fanbase, but failed to register on most mainstream radars.

The following 18 months, however, brought the intensity of an entirely different spotlight. He released the single “11 Minutes” in February 2019, a collaboration with Blink-182’s Travis Barker and Diamond-certified songstress Halsey.

The tragically romantic music video and a very cute mini press tour, plus a joint performance at the 2019 iHeartRadio Music Awards, cemented Harrison as one-half of a high-profile celebrity relationship – new terrain for the young rocker.

Simultaneously, major music publications began to wise up and christened Harrison an “artist you need to know.” He went on to collaborate with Machine Gun Kelly, Imagine Dragons frontman Dan Reynolds, and Marshmello. His summer 2019 single, “Hope For The Underrated Youth,” premiered on BBC Radio 1 as Annie Mac’s highly respected “Hottest Record.”

But just as 2019 heralded highs, it also brought its lows.

Harrison’s mother was in a car accident and nearly died. He says he got his heart broken when he and Halsey split; she’s said she wrote the tender love song “Finally // Beautiful Stranger” about Harrison, while “Forever … (is a Long Time)” shows her panicking and “sabotaging” the relationship.

“It’s weird enough experiencing heartbreak for the first time, or nearly losing a family member, under normal circumstances,” Harrison explains. “It’s also a very weird, strange thing, the first moment you walk to the shop and someone’s following you around with a camera.”

He describes the dual experiences of trauma and fame as a state of constant anxiety, because he felt there was nowhere he could go to “escape” his own thought spiral – especially because he refuses to put on a mask for his fans.

“I didn’t know what was real and what wasn’t. That was what was crazy. I was feeling all these emotions that were so new to me, but it felt like I was in a maze and the walls were continually moving around.”

‘The word “weird” was going through my brain. “Weird” was in my head, all day and all night’

The ultimate catalyst for “Weird!” came in November, when Harrison played a sold-out show at London’s iconic O2 Academy Brixton – a watershed moment for any budding musician.

“Two years prior, just two and a half years prior to that, I was sat in a two-bedroom flat with my three band members,” he explains. “My guitar player was sleeping in the living room. We couldn’t sell 10 tickets. And we were watching these videos [of bands performing at Brixton], going, ‘If we get there, it will all be alright.'”

“And after that show,” he continues, “I remember going out, getting drunk or whatever, celebrating. And then I sat in my hotel room that night and it was very late and I was very out of it, but I felt like I grew up 10 years in 10 minutes.”

Even after he finished touring and went to build his studio in Spain, Harrison felt the sheer weirdness of his life bubbling under his skin.

“The word ‘weird’ was going through my brain. ‘Weird’ was in my head, all day and all night,” he says. “I was like, ‘Why does this word keep coming into literally every single sentence and syllable I’m saying ever?’ I think purely because, subconsciously, that’s the way I felt. And it was a long time. It was brewing for six months.”

He climbed onto the roof one night – “Don’t try that at home because it was quite dangerous,” he adds – and the lyrics spilled out of him.

“I was living in fear and wanting to be an asleep human being, so no one would judge me for the way I am,” he explains. “But then I decided to wake up and be like, at the end of the day, if I am being completely myself and I’m being completely who I want to be, people are going to either love me or hate me.”

Harrison hadn’t imagined “Weird!” as the lead single for his sophomore album; it was slated to be released much later in the year.

But when the coronavirus pandemic began to sweep the world and force everyone indoors, “Weird!” suddenly felt painfully universal, and its hopeful undertones felt necessary.

“Everyone feels like they’re trapped inside of a box – or, as I say, in a maze that’s moving around, and they can’t figure out where the exit is,” he explains. “And we never know when this puzzle that we’re all facing is going to start to get easier.”

Despite our current circumstances, Harrison’s sophomore album as YUNGBLUD will reflect his shift towards optimism.

Although he’s selective about details, he tells me to expect an eclectic experience that draws from hip-hop, Britpop, and even gospel influences.

He insists that he wants it to feel as scattered and electric and vivid as real young adulthood – the sort of coming-of-age story that movies and TV have been trying to capture for years. He rattles off “10 Things I Hate About You,” Netflix’s “Sex Education,” E4’s original series of “Skins,” and HBO’s “Euphoria” as some of his favourites. (When I mention “Lady Bird” and he admits he hasn’t seen it, he immediately promises, “I will do it tonight. I will personally buy it on Apple TV.”)

Harrison also vows that every single piece of the album will be an accurate reflection of his brain at that moment.

“In the studio, I can be quite mean,” he admits, which I tell him I find very difficult to believe.

“No, it’s kind of crazy,” he replies sheepishly. “We’re going to put out videos of me making this next album and I watched myself, I’m like… I guess I’m not mean, I’m just so wrapped up in it. I bite. I’m like, ‘No, that’s f—ing the worst thing I ever heard. I hate it. I hate it.'”

“Because I’m trying to hear a sound in my head and if it doesn’t come out of the speakers, I get frustrated because it’s almost there,” he continues. “It’s literally like there’s a lollipop getting dangled in front of your mouth, and you want to lick it but someone is just taking it away from you.”

As Harrison continually notes, YUNGBLUD is a community built upon more than acceptance. His fans are predisposed to embrace and celebrate their differences, to condemn prejudice, and protect each other.

“At the end of the day, the biggest thing I’ve learned is that no matter what situation you’re in, your feelings are valid,” he tells me.

“I always want it to lead to liberation and love, every single outcome, because it will if we work hard enough for it.”

In the few short weeks since we spoke, Harrison has left his quarantine base to join the Black Lives Matter protests in Los Angeles.

Through his publicist, he declined to offer any additional commentary for this article – but, true to form, his actions speak louder than words, and they won’t shut up.

Alongside Halsey (he says they have remained close friends since their split), Harrison has been a constant presence on the front line. Both artists have helped protect and treat other protesters, many of whom the LAPD has wounded with rubber bullets and tear gas.

“to stand up and shout in the face of tyranny is what it means to know you are alive,” he recently wrote on Twitter. “your voice is the most powerful tool you have. be brave, keep using it.”

“The music’s always controlled by culture first, no matter what we do. That’s why everything is genre-less, and everyone lost control. The gatekeepers lost control,” he tells me.

“If kids want to bang pots on their head and that’s helpful or comforting, then we’re going to bang pots on our head. That’s what it was about for me, because I remember when I first started out – and sometimes it still happens – people don’t get it. People in high places don’t want to get it, YUNGBLUD, because it’s loud and in your face and slightly cocky.”

“And I think that’s fine. Because all I want to do is to build a culture of people from all different walks of life that can’t be ignored, because we’re that loud and that vast and that big. That’s all that matters to me.”