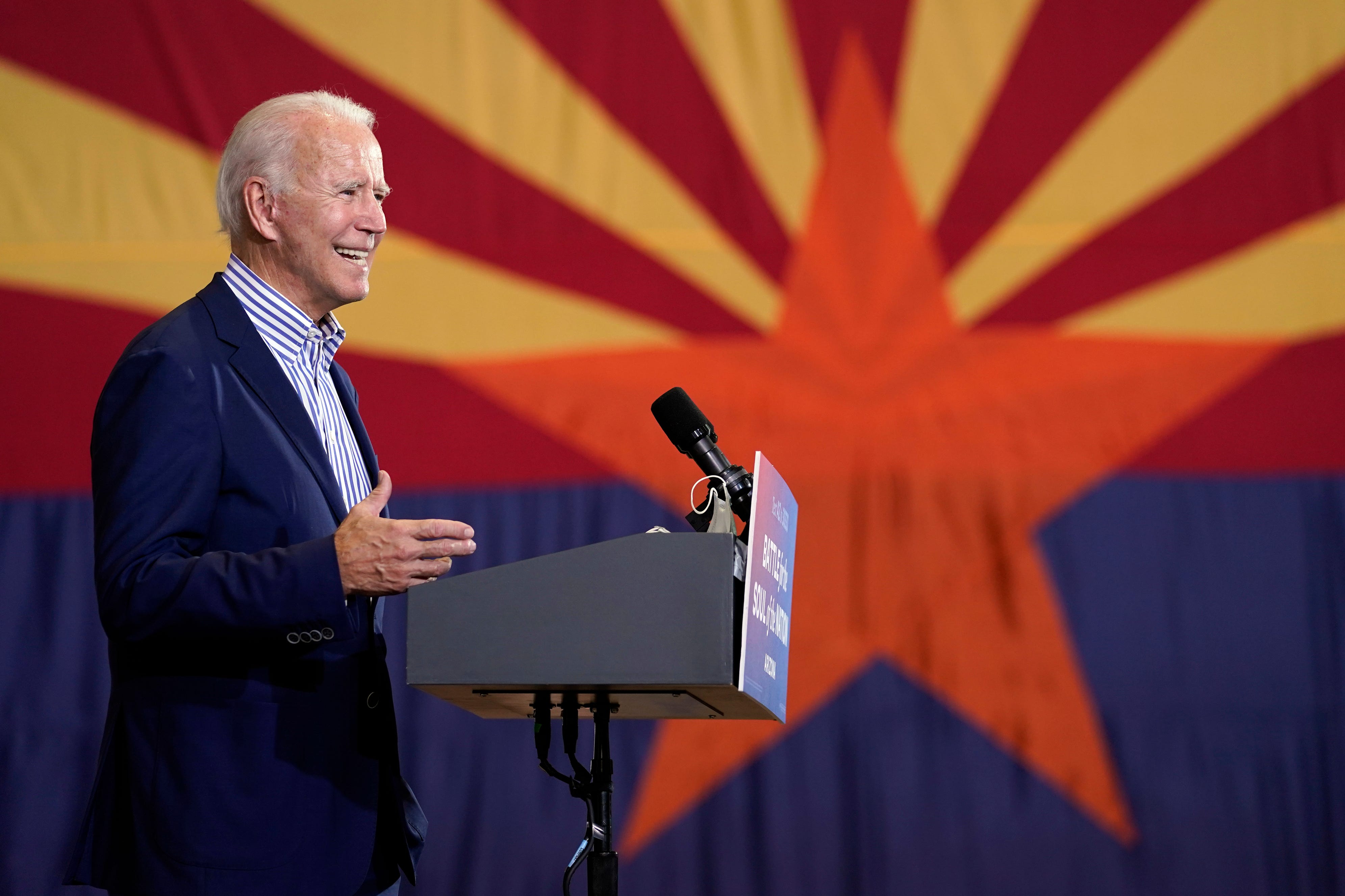 AP Photo/Carolyn KasterPresident-elect Joe Biden at the Carpenters Local Union 1912 in Phoenix during the 2020 presidential campaign.

Arizona flipped blue on Wednesday for the first time in almost a quarter century, handing President-elect Joe Biden the state’s 11 electoral votes and bumping up his Electoral College count to 290.

With nearly all the votes reported, Biden is beating President Donald Trump by a 49.4% to 49.1% margin, or by 0.3%, according to Decision Desk HQ and Insider. As of November 12, roughly 11,635 votes separate the two candidates in Arizona.

In 2016, Trump defeated Hillary Clinton in Arizona by about 3 percentage points. The state has gone for a Democratic presidential candidate â€” then-President Bill Clinton â€” just once since 1972.

But by late summer this year, the Trump campaign was clearly worried about losing Arizona and the president held several events in deeply Republican areas of the state in an effort to drive up base turnout in the days preceding the election. The campaign lashed out at Fox News on November 3 when it became the first news organisation â€” by a longshot â€” to call the state for Biden, significantly undermining Trump’s false claims that he’d been reelected.

On November 5, retired astronaut Mark Kelly, a Democrat and the husband of former Rep. Gabby Giffords, ousted GOP Sen. Martha McSally, who was appointed by Republican Gov. Doug Ducey to fill Sen. John McCain’s seat following his death in August 2018. With Kelly’s election and the 2018 election of Kyrsten Sinema to Arizona’s other Senate seat, Democrats will now control both of the state’s Senate seats for the first time since 1953, according to the Arizona Republic.

With the win in Arizona, Biden has charted a roadmap for future Democratic victories in the Southwest.

Arizona’s leftward shift can largely be attributed to Maricopa County, the fastest-growing county in the United States and home to roughly 61% of the state’s voters. The county has trended blue in recent years as it’s welcomed more highly-educated and racially-diverse residents. In 2016, Trump defeated Clinton in Maricopa 48%-45%, but this year, Biden won the county by a 50%-48% margin.

The state is also home to a growing Latino community, which is disproportionately younger and left-leaning. According to CNN exit polling, Biden won the Latino vote 63%-36% over Trump in Arizona, with the group making up nearly 20% of the electorate.

Paul Bentz, an Arizona-based pollster and GOP strategist, attributes much of the Democrats’ win to “significant blue-ing” in Maricopa county, where Democrats have spent years activating younger and more diverse voters.

“On the presidential side, we saw a very concerted effort from Democrats to convert younger Democrats, Latinos, unaffiliated voters and others â€¦ to organise, activate, and get ready to go and they started that more than two years ago,” Bentz told Business Insider. “This has been a long time coming.”

Bentz argued that Arizona isn’t a purple state yet, but is instead “red with blue spots, sort of a Dr. Seuss character.” But the blue wave doesn’t seem to have hit the state on the local level. While counts haven’t been finalised, it looks like Republicans will hold on to their majorities in the state house and senate, according to the Arizona Republic.

Polling has also shown that suburban women shifted blue this cycle. This group has been crucial to Democratic victories across the country, both this year and in 2018. Arizona’s older and retired community has also ballooned in recent years and polling showed that Biden made gains among voters over 65, a traditionally Republican demographic.

“You just have a growing Democratic population here that doesn’t agree with Donald Trump when it comes to healthcare, immigration, environment, whatever it may be,” he told Business Insider. “The Republican party has been attacking Latinos in Arizona now for going on over a decade and so I think that really is why you have a fairly consistent type of voting block when it comes to Latinos here that align with Democrats for the most part.” 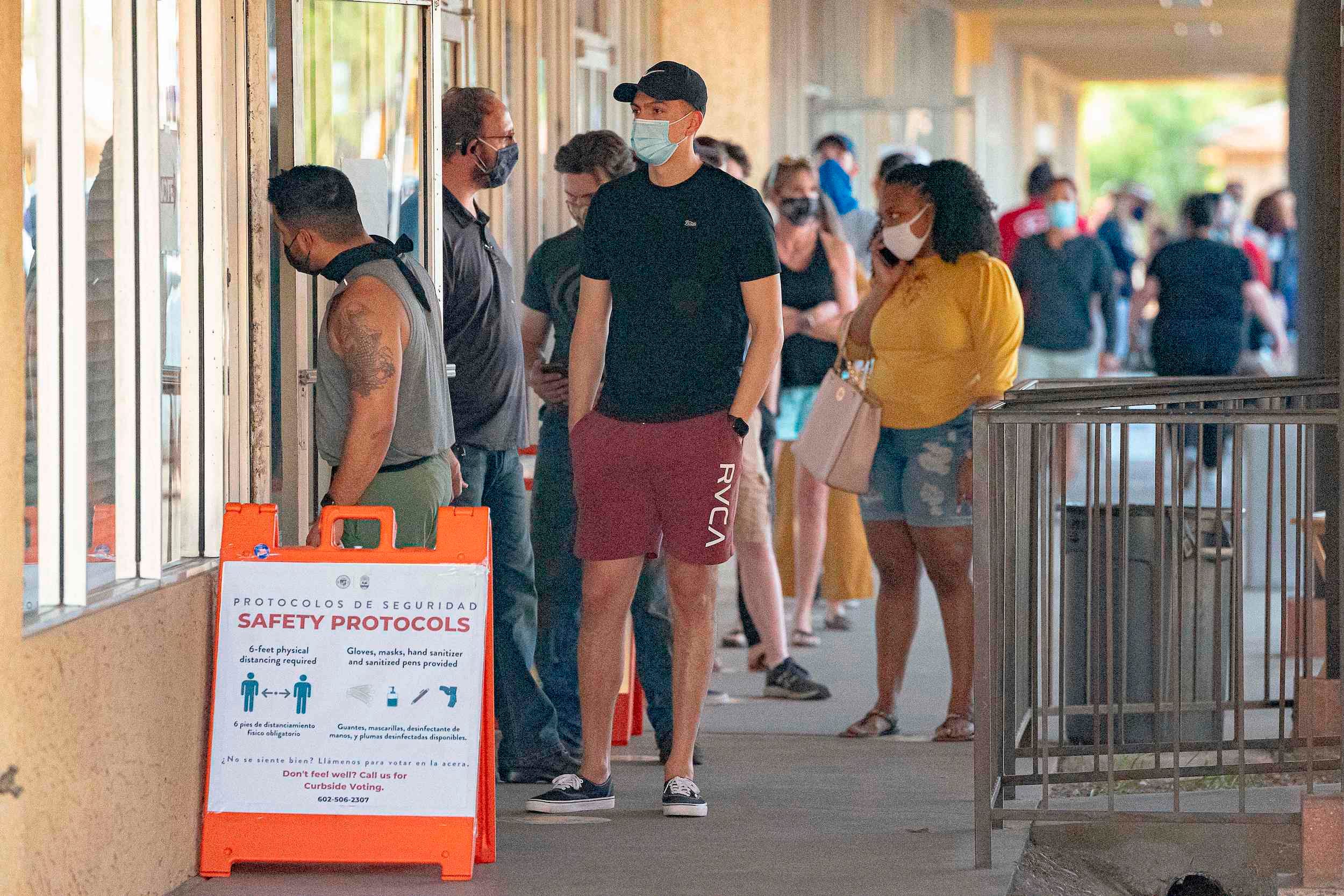 OLIVIER TOURON/AFP via Getty ImagesPeople wait in line to vote at a polling place at the Scottsdale Plaza Shopping Centre in Scottsdale, Arizona, on November 3, 2020.

Another key factor in the race was the coronavirus pandemic, which hit Arizona hard after Ducey quickly and prematurely reopened the state in the spring and failed to enforce critical mitigation techniques, including mask-wearing and social distancing, causing infections in the state to skyrocket.

The state’s case count, at over 265,000 total infections, is ticking up again, and more than 6,200 people have been killed by the virus in the Sunbelt state, based on data compiled by Johns Hopkins University.

Arizona’s Senate race exhibited a different dynamic than the presidential election. While Kelly positioned himself as a moderate Democrat and something of a hero for his career as an astronaut, McSally was neither moderate enough to win swing voters nor pro-Trump enough to win full backing from the president’s base.

The incumbent declined to back Trump in 2016 and wouldn’t say she was “proud” of the president during a recent debate.

“The true-believing Trump voters always had a hard time with her,” Bentz said of McSally. “She suffered not only from not being able to earn support from suburban women and swing voter types, but then she also had a little bit of weakness among the Trump voters.”

And McSally wasn’t simply an unelected senator â€” she also lost her bid for Arizona’s other Senate seat to Democrat Kyrsten Sinema in 2018.

McSally first ran for the House of Representatives in 2012, losing narrowly to Ron Barber, a district director for Giffords. She ran for the seat again in 2014 and won in a rematch with Barber. Upon joining the House, she became well-known as a moderate Republican representing the Tucson-based 2nd Congressional District, a key swing area of the state. 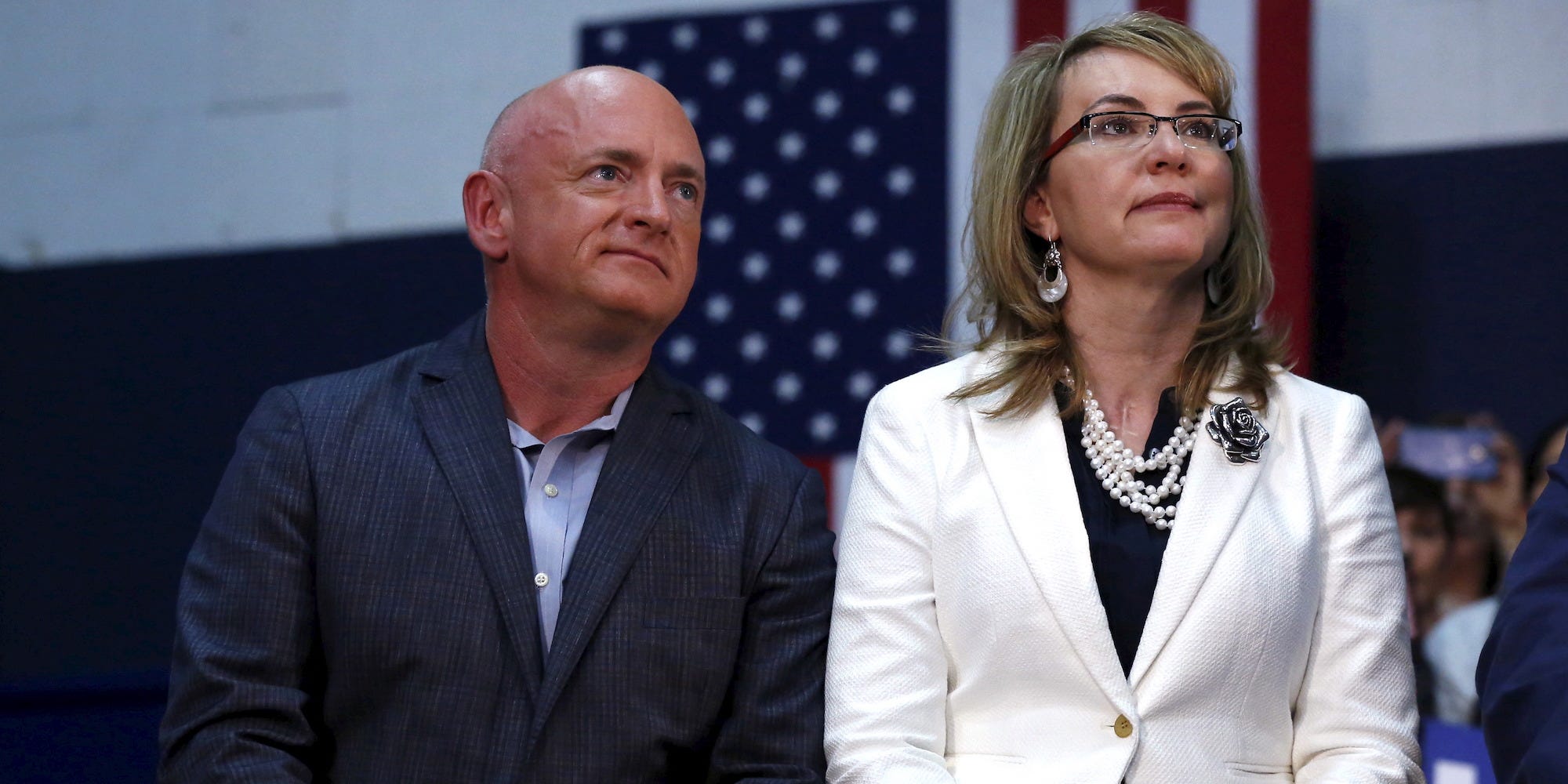 After being easily reelected in 2016, many saw her as a future star of the Arizona GOP.

However, once McSally ran for the GOP nomination in the 2018 Arizona Senate race, she had to appeal to a Trump-dominated GOP, a far cry from the more individualistic Republican party that the state used to embody. She evolved into a more vocally conservative Republican, slamming Sinema relentlessly through attack ads that many deemed as excessively negative.

The attacks backfired on McSally, with Sinema winning the Senate race and even receiving 12% of the Republican vote.

Meanwhile, when Kelly entered the 2020 Senate race, he ran to the centre and stayed there throughout his campaign, promising to be a bipartisan, independent voice for the state. Kelly also invoked the legacy of McCain often, saying that he wanted his career to resemble that of the longtime senator, which appealed to the state’s moderate voters.

Trump was likely also hurt in Arizona by his own attacks on McCain, the state’s former Republican senator and presidential nominee. McCain wasn’t a fan of the president and voted against the GOP’s 2018 effort to repeal the Affordable Care Act, denying his party the support it needed to fulfil a longstanding campaign promise.

The president continued to ruthlessly tear into McCain, mocking his time a prisoner of war in Vietnam after he died from brain cancer in 2018.

McCain’s wife, Cindy, and TV host daughter, Meghan, have been publicly critical both of Trump’s treatment of their family and of his politics. The McCain family also has a longstanding relationship with Biden, who worked with McCain in the Senate for several years.

Twelve years after her husband ran as the Republican presidential nominee, Cindy McCain formally endorsed Biden in September and joined the transition team’s advisory board.

“There’s a lot of more traditional Republicans, still, that really respect John McCain’s legacy and respect the McCain family and I’m sure that helped a lot of them come over to the Biden side â€” I’m positive of that,” he said.

Look: Trump may end losing this election because of his irrational grudge against John McCain. Would be quite a dramatic flourish.