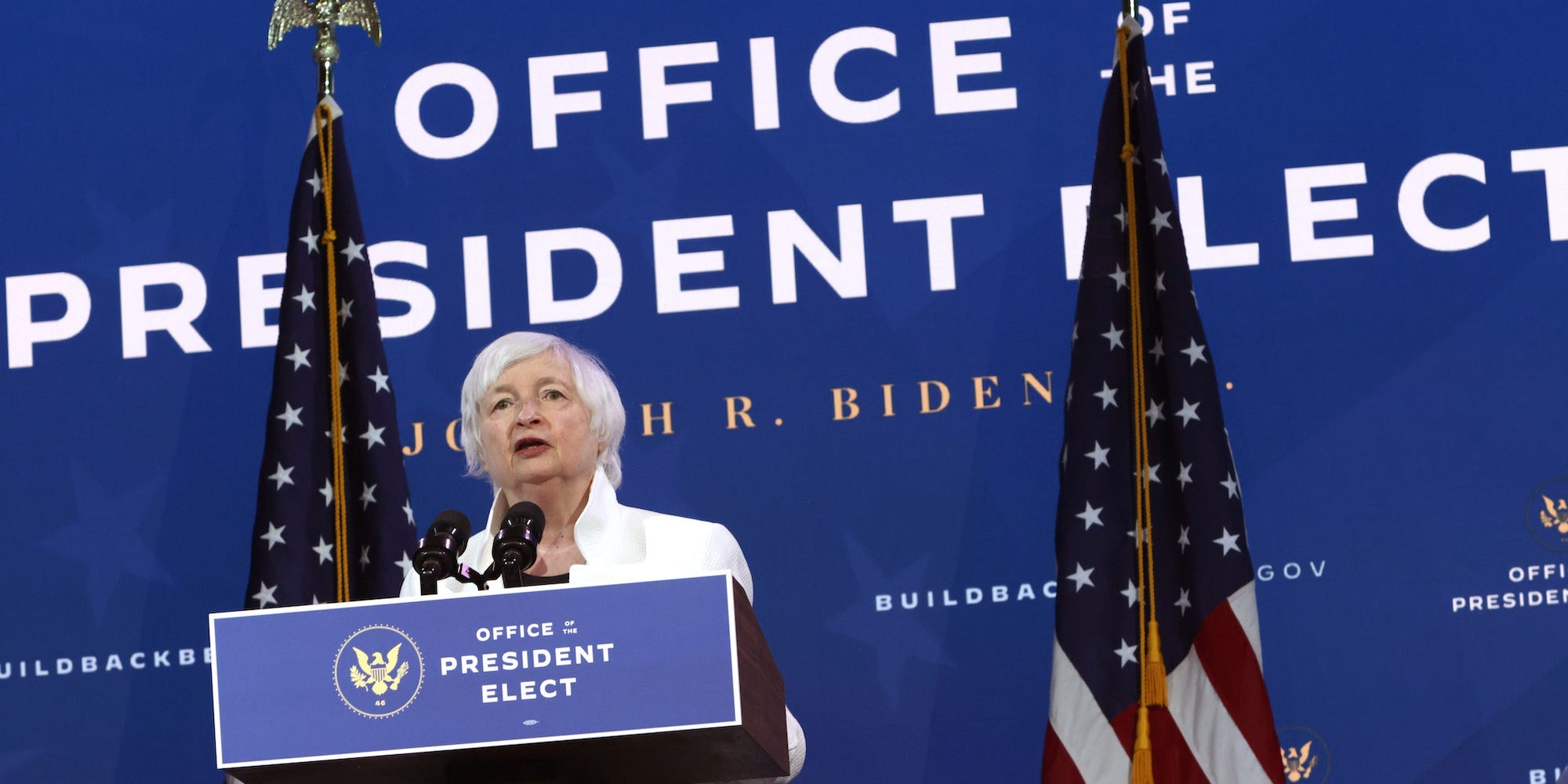 Alex Wong/Getty ImagesTreasury Secretary nominee Janet Yellen speaks during a Dec. 1, 2020, event in Wilmington, Delaware, to name President-elect Joe Biden’s economic team at the Queen Theatre on December 1, 2020 in Wilmington, Delaware. Biden is nominating and appointing key positions to the Treasury Department, Office of Management and Budget, and the Council of Economic Advisers.

Janet Yellen, President-elect Joe Biden’s pick to head the Treasury, urged lawmakers at her Senate confirmation hearing on Tuesday morning that now is the time to “act big” on another massive rescue package to combat the pandemic.

“Neither the President-elect, nor I, propose this relief package without an appreciation for the country’s debt burden,” Yellen said in introductory remarks during a Senate Finance Committee hearing. “But right now, with interest rates at historic lows, the smartest thing we can do is act big.”

Yellen also laid out the extent of the economic and human devastation the virus has inflicted on the US over the past year â€” and warn of deeper recession without a set of fiscal policies to address it.

“Economists don’t always agree, but I think there is a consensus now: Without further action, we risk a longer, more painful recession now â€” and long-term scarring of the economy later,” she said.

Yellen added it heightens the need for Congress to act swiftly on Biden’s $US1.9 trillion economic aid plan, which he rolled out last week.

“Over the next few months, we are going to need more aid to distribute the vaccine; to reopen schools; to help states keep firefighters and teachers on the job,” Yellen said. “We’ll need more funding to make sure unemployment insurance checks still go out; and to help families who are at risk of going hungry or losing the roof over their heads.”

Yellen is expected to face questions on a range of issues including trade and tax policy. Democrats opened the hearing by calling for additional economic aid for individuals and businesses.

Biden’s proposal for another large relief package will build on the $US900 billion aid bill that Congress and President Trump enacted in late December. It contains provisions for new stimulus checks, unemployment insurance, expanded tax credits and aid to state and local governments among others.

As treasury secretary, Yellen will play a pivotal role in guiding the Biden administration’s negotiations with a deeply divided Congress once Biden is sworn in on January 20. Democrats will have very slim majorities in both chambers.

Republicans are starting to oppose to the relief package, citing the growing budget deficit which hit $US3 trillion last year after a surge of pandemic relief spending. It dampens its odds of a smooth passage in both chambers. Democrats will also likely attempt to modify aspects of the plan during the negotiation process.