Why Greece Is Now A Yard Sale For The Rich 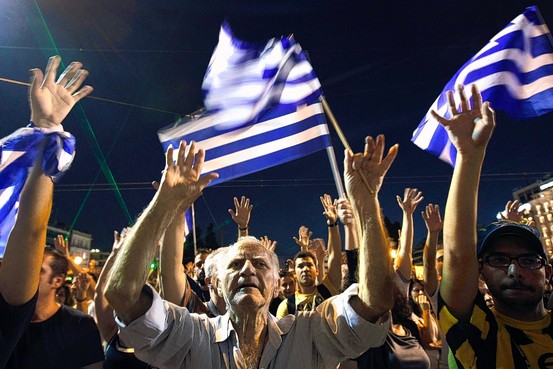 Well, Greece isn’t really fixed, of course, but look how fast it all turned out to be nothing and this morning hardly anyone is even mentioning it.  The crowds protested but this vote wasn’t in their hands – it was in the hands of their corrupted officials and they voted 100% along party lines to keep Prime Minister Papandreou in power, which will now allow him to push through another $40Bn in budget cuts (14% of GDP or $2.25Tn if applied to the US budget – in a single year) that will pretty much turn the Government of Greece into nothing more than a debt collection service for Banksters – as they no longer have the money to provide any Government services to the people.

Yes, it’s a Republican wet dream and it will be a fun experiment to see if we can truly strip a government down to the singular function of taxing the citizens to give money to banks – consider it a practice run for their vision of the US as soon as they can get a couple of more seats in the Senate and Michelle Bachmann is President. On the condition that the Greek Parliament agrees to sell their people down the river, the EU and the IMF agree to give them MORE MONEY. Well, not GIVE them, of course, they will lend it to them at 5.2% – which is a very nice profit for the lenders and more money than a US 30-year mortgage (but Greece is only given 7.5 years to pay it all back – an impossible task with their debt to GDP ratio).

This will plunge Greece another 25% of their GDP further into debt while the cuts in Government services are projected to lower their GDP by another 15% so we first add 25% to the 135% debt the already have, which is 160% and then we multiply that by the 15% that the GDP will drop and we get a debt to GDP ratio of 184% – isn’t that special? So about $600Bn in debt at 5.2% interest is $31.2Bn a year (10% of GDP) JUST IN INTEREST – that would be like the US carrying an annual $1.6Tn interest payment while cutting Government spending down to $1.6Tn – isn’t this a fun game?!?

That’s the “fix” that Greece can now look forward to.  Also conditioned in the loan is the forced sale of state assets.  This is the real coup-de-gras for the Capitalists as they turn a nation’s assets into nothing more than items in a very exclusive yard sale that only the already-rich can participate in.

Already, DT has picked off a 30% chunk of OTE, the state telecom company, which employs (employed) 30,000 people and Athens News Agency reports that tenders on a host of other state properties for full or partial sale — including the ports of Piraeus and Thessaloniki and Hellenic Postbank, one of the country’s best-capitalised lenders — would be launched in coming months.  “Greece has to take new commitments. Greece has to enlarge the ambition of its privatisation programme,” leading eurozone policy-maker, Luxembourg Prime Minister and master of evil, Jean-Claude Juncker said on Tuesday.  “Muhahaha!”

Again, to put this into perspective, this would be like the US being forced to sell off the Post Office to DHL, our Ports to Dubai (we didn’t like that last time, did we?), the Smithsonian could go to a private Japanese collector of Americana, etc. Oh wait a minute, isn’t privatizing our government services part of the Republican plank already? Gosh, I get so confused between what bankrupt Nations that are hopelessly in debt are FORCED to do by their creditors as a last resort and what the American people are being asked to vote for voluntarily…

Oh well, at least “fixing” Greece is good for our markets… What? It’s not? No, our futures are, as we expected, not particularly thrilled because PIIGS was Portugal, Italy, Ireland, Greece and Spain so, even if Greece is out of the equation, we still have PIIS and that’s not really better, is it? We’ll have to work a U or an A into that acronym soon because a Bloomberg National Poll finds that 44% of Americans are worse-off than they were two years ago with two thirds feeling this country is on the wrong track.

“Gas prices are higher, grocery prices are higher, transportation prices are higher,” says poll respondent Ronda Brockway, 54, an insurance company manager and political independent who lives in a suburb of Harrisburg, Pennsylvania (where the Mayor is PRAYING for a solution to the budget crisis). “The jobs situation nationwide is very poor.”

The gloom covers the immediate future, with fewer than 1 in 10 people expecting unemployment to return to pre-recession levels within the next two years, and it extends to the next generation. More than half of respondents say their children are destined to have a lower standard of living than they do, upending a traditional touchstone of the American Dream.  “Unless you limit the actual money coming in to the government and give businesses a break, I don’t think you’re going to have a bounce-back in the economy,” says poll respondent Michael Jefferys, 37, a business analyst for a building supply manufacturer. Yes because that’s working so well for Greece, isn’t it? $15Bn in POMO did wonders for the US Markets in the first two days of the week. Already we’re climbing back to our Must Hold lines on the Dow and the S&P while the -2.5% lines have been retaken on the Nasdaq, the NYSE and the Russell. Wasn’t that easy? Keep in mind that our prediction was that “THEY” would attempt to run the indexes back to the +2.5% by June 30th – in order to dress those windows for the end of the Quarter.  We covered yesterday, in case the Greek thing fell apart, but now it’s up to Uncle Ben to give us the push we need to keep the ball rolling into Friday – ahead of the big end of quarter push next week.

Bernanke will hold a press conference after the Fed meeting at 2:15 and the FOMC announcement is pushed up to 12:15 so they are looking to move the markets this afternoon.  If this doesn’t work, perhaps the Fed can start doing what the BOJ does, which is jump in and start buying Topix ETFs anytime their markets drop more than 100 points in the morning session.

BOJ Governor, Masaaki Shirakawa, warned on March 9th in a lecture in Germany that “there is an increasing possibility that Central Banks will no longer be seen as neutral institutions, partly due to their stronger intervention in resource and capital allocation at the micro level.” Gee – ya think?

FDX gave us a good report this morning, saying demand is up and costs are coming down, which earned them a spot on the front page of the on-line WSJ and should give the markets – or at least the Transports – a lift today. PHG, on the other hand, who are the same size as FDX but deal with consumers, warned that weak demand in Western Europe will hurt results at its lighting and consumer lifestyle units. Margin pressures and higher marketing spending will result in Q2 EBITA for the lighting unit of $122M, down sharply from $277M in Q1. Fortunately, Wall Street Journal readers are spared from that bad news on the front page but you can find the report buried in the bottom half of the Europe Section, where it rates a single line that says “Philips Warns on Profit.” Won’t WSJ readers be surprised when PGH opens down 12% this morning?

Just like parent company Fox News – the WSJ has become famous for reporting “all the news that fits” (in with the overall propaganda). Something Jon Stewart noted over the weekend when he was a guest on Fox News Sunday:

Daily Show Full Episodes Political humour & Satire Blog The Daily Show on FacebookWell, our portfolios are, at least, fair and balanced at the moment and we’re strapped in for a wild ride today as we head into the last Fed meeting of the QE2 error (not a typo) with no additional meeting scheduled until after the US defaults on their own debt on August 2nd. We’ve been cashing in our bullish winners and leaning a bit more bullish but, if we pop our Must Hold lines on the Dow (12,200) and the S&P (1,300) then we will just have to go with the bullish flow for the duration.  Our last trade of the day was a bullish flip on oil into today’s 10:30 inventories but we also went long on UUP (July $21 calls at .43), which is bearish for the markets and took bearish spreads on the Nasdaq with SQQQ and the Russell with IWM so, on the whole – we’d be happier with a little dip.

Either way – be careful out there!