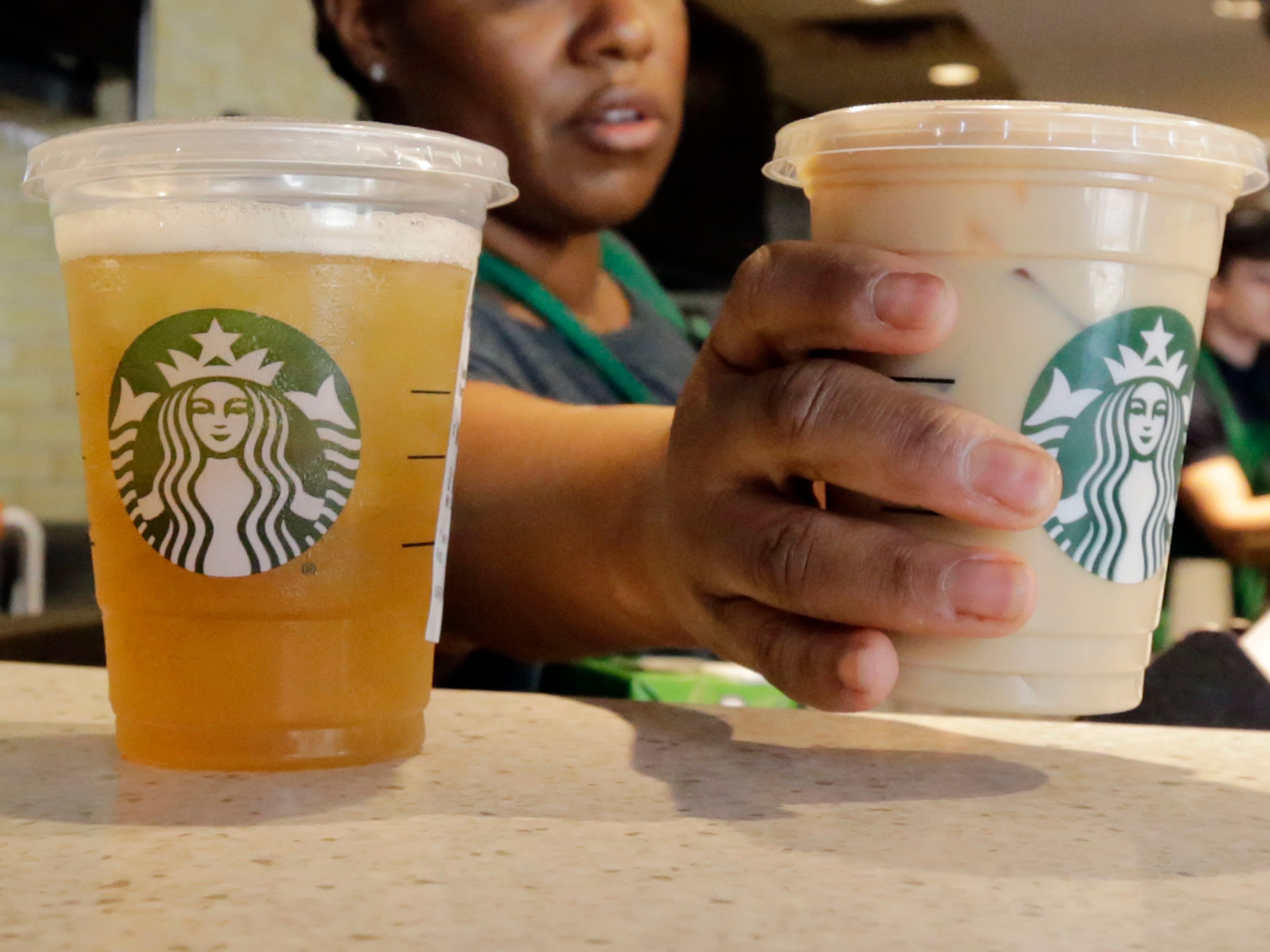 Richard Drew / AP PhotoSome drink orders are more complicated or confusing than others.

I worked as a Starbucks barista for two years and although I love the chain and its variety of drinks, I don’t remember every order fondly.

Some drink requests required a lot of extra steps or just didn’t quite make sense. Other orders were needlessly complicated or just plain frustrating to prepare.

Read on for what I think are some of the most annoying drinks to make.

Many baristas know that Frappuccinos are pretty inconvenient to make, but the seasonal s’mores one takes the cake for me.

The Frappuccino starts with marshmallow-infused whipped cream, which is specially made. This means that if you’ve run out, you have to prepare a new canister of it before you even start making the Frap.

After that’s prepared, the drink is made with layers of chocolate sauce and vanilla-flavored Frappuccino, then topped with the special whipped cream and graham-cracker dust.

When I was a barista, I remember thinking this drink was a nightmare because of the sheer amount of time it took to make it.

Unlike a latte, a cappuccino consists of espresso shots topped with half steamed milk and half foam. I think it’s actually one of the easier drinks to make when you’re using the standard 2% milk.

But when a customer asks for just the foam and chooses a non-dairy milk, preparing the drink becomes a multiple-steam-pitcher affair.

The proteins in non-dairy milk are not as strong as they are in cow’s milk and thus it can’t keep air bubbles quite as well. So when you try to froth a non-dairy milk, like coconut milk, the results aren’t exactly the same â€” you get some airy sort of foam, but mostly just steamed liquid. 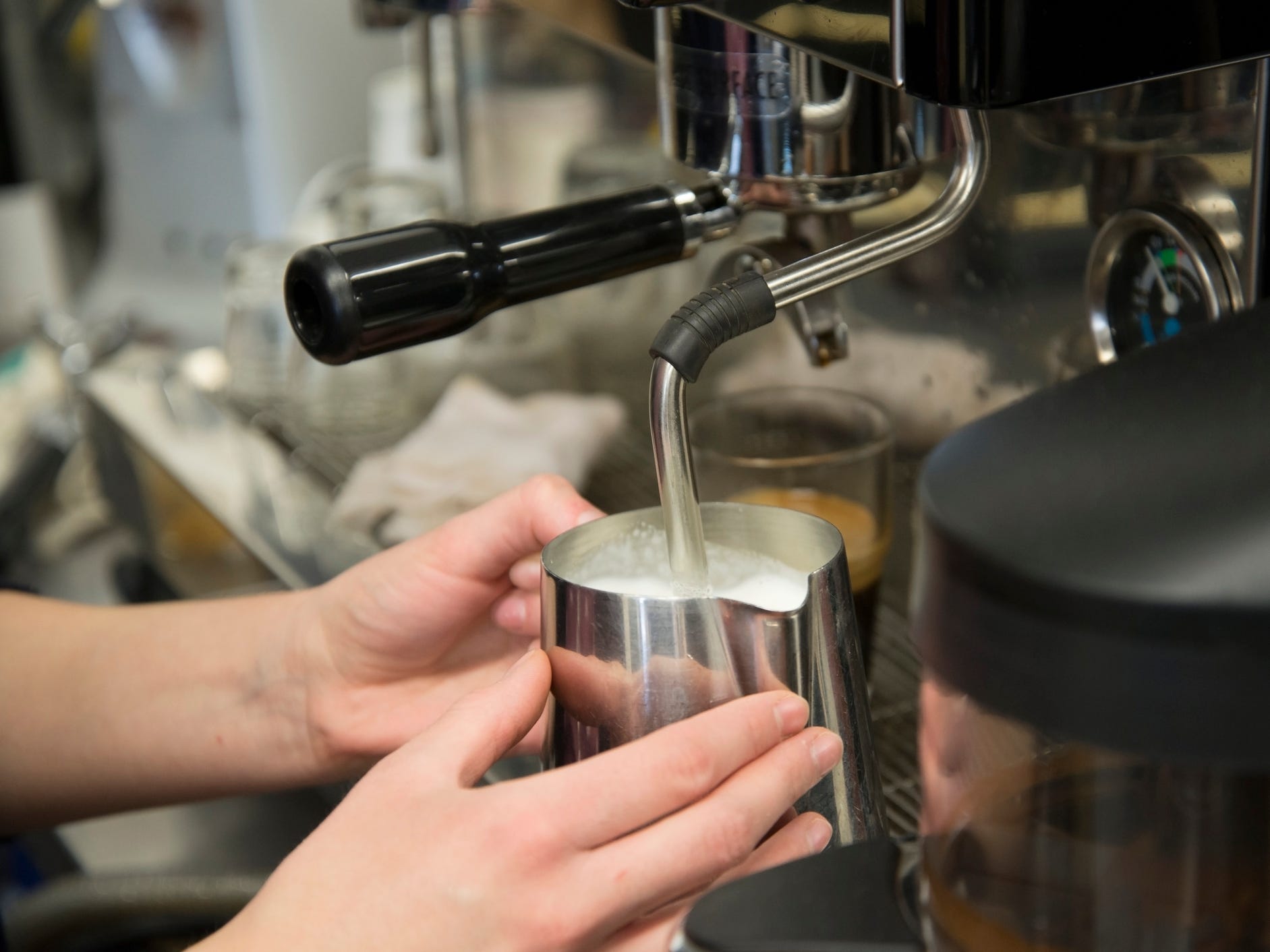 The espresso machines at Starbucks typically heat the steamed milk for your favourite drinks to about 160 degrees Fahrenheit. When a customer asks for a drink to be extra hot, the milk is steamed to be 180 degrees.

Although they aren’t difficult to make, extra-hot lattes are a frustrating order because of how dangerous they can be â€”regularly consuming piping-hot beverages can be bad for your esophagus. The high temperatures can also downgrade the quality of your drink.

Sure, an extra-hot drink isn’t necessarily a bad idea if you don’t plan to enjoy your coffee right away, but if you’re hoping to sip on your latte ASAP, you may want to trust the standard drink temperature.

Pour-over coffee isn’t a complicated order, but it can be tricky to prepare when the cafe is busy

At certain points during the day, Starbucks stops brewing dark and blonde roasts in its large brewers. Instead, those roasts are offered as a per-customer order: a pour-over.

Maybe one or two pour-overs are manageable, but when a whole office orders a round of blonde-roast coffees late in the day, it’s quite the time-consuming hassle.

Pour-overs require the barista to grind the coffee, prepare the special filter with the grounds, fill a watering-can-like container with the appropriate amount of water, and then pour the water very slowly over the coffee grounds into the cup. 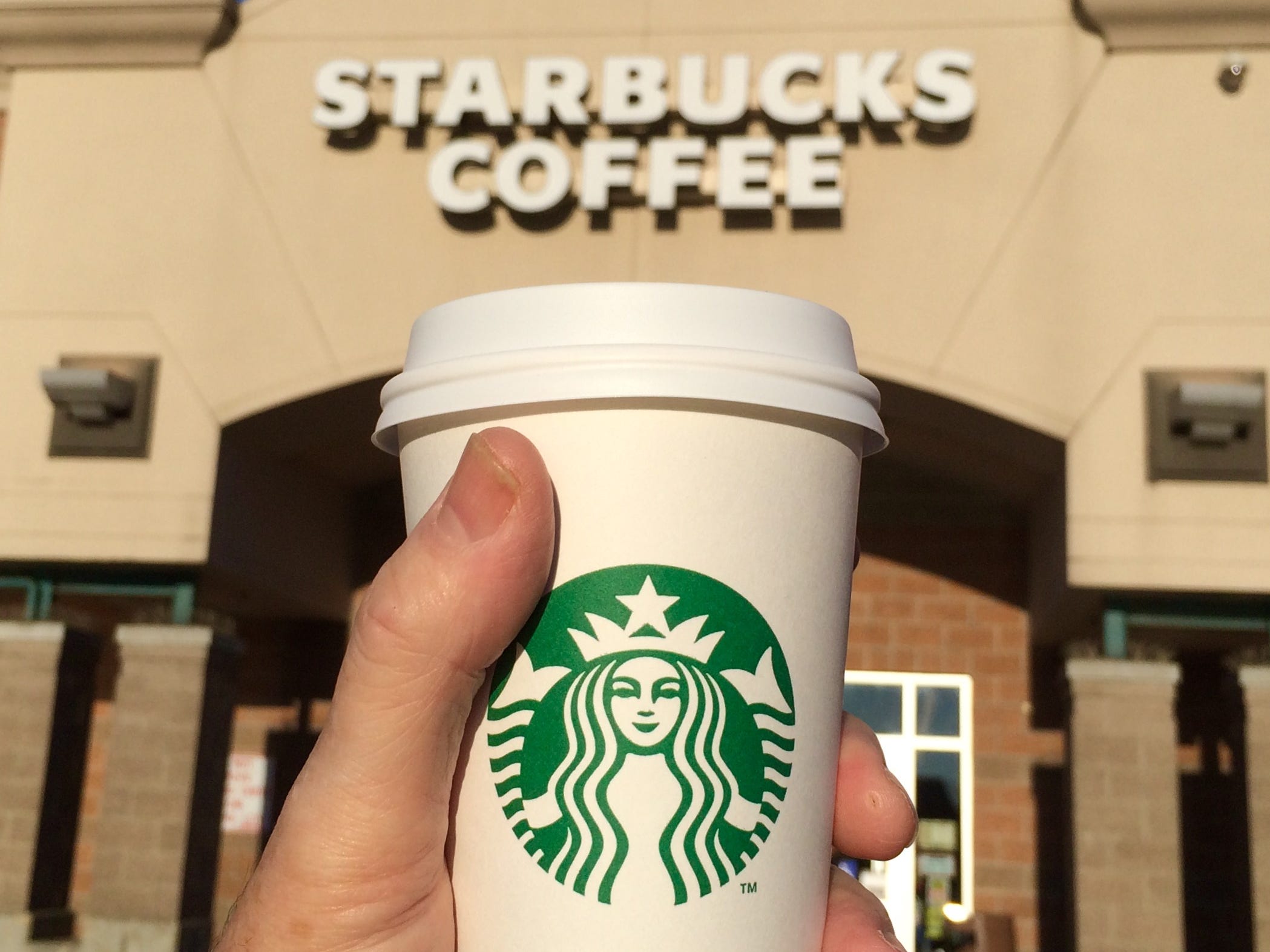 If you’re ordering a drink with more than three sweeteners, you may hold up the line

I still remember a regular customer who consistently held up the bar because she would order a drink with 12 Stevias.

Just a suggested rule of thumb â€” if you want more than three sweeteners added to your drink, it may be easier for you to add them yourself at the condiment station.

Iced green-tea lattes can become clumpy messes, especially if you ask for no ice

Hot green-tea lattes are delicious and smooth when the matcha is steamed with the milk. But when this drink is iced, it isn’t always perfect.

To make an iced green-tea latte, the matcha is added to a cup with ice and milk and then physically shaken. This can be an imperfect method that sometimes results in a clumpy drink.

It’s even worse when a customer asks for no ice because there’s practically no way to make sure the drink is homogeneous and it often results in a clumpy matcha latte. 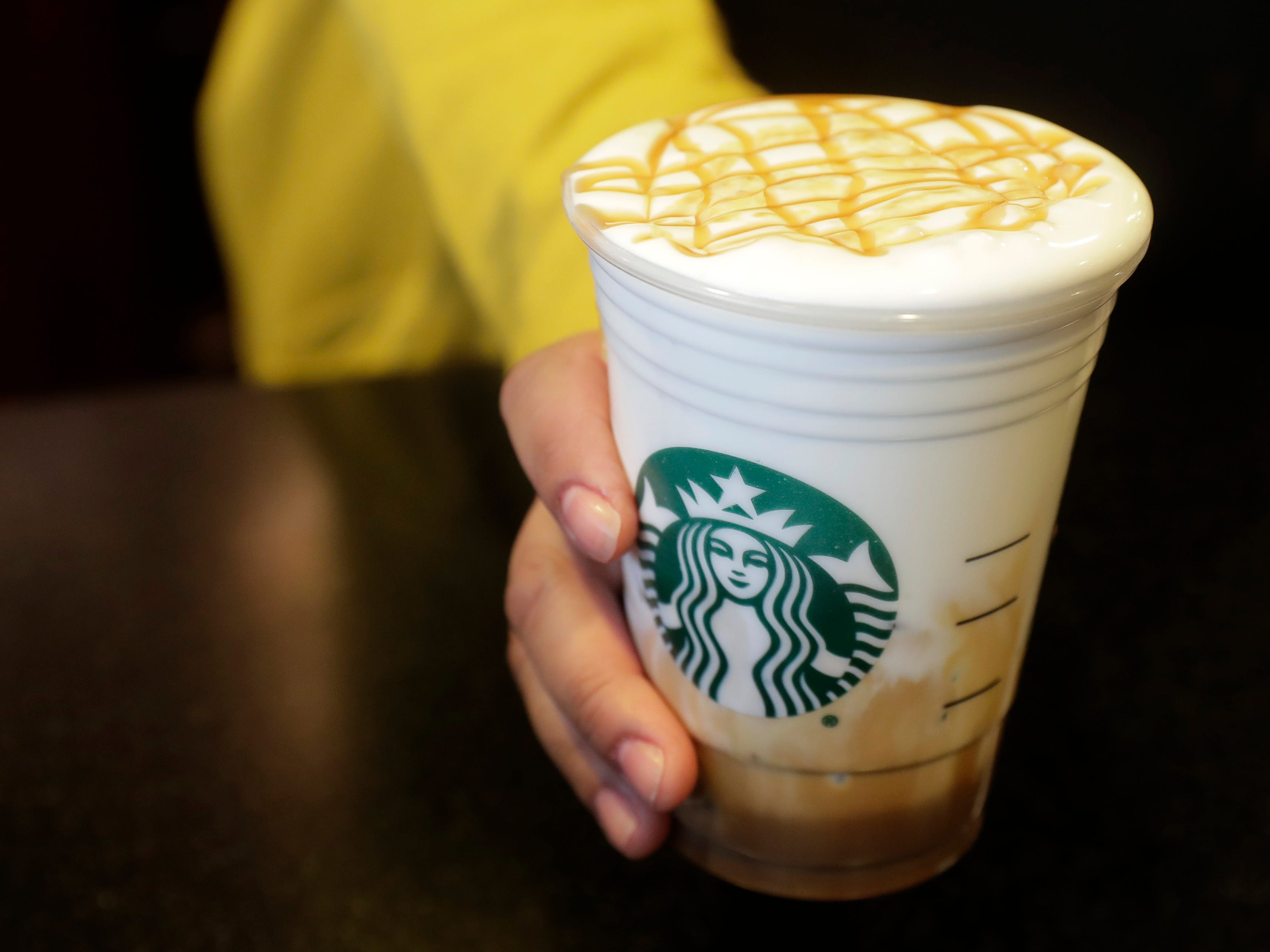 A caramel macchiato is probably one of the most popular drinks Starbucks offers.

It’s made by putting vanilla syrup on the bottom of the cup, then adding steamed milk, espresso shots, and caramel drizzle in that order. The iced version contains the same ingredients except for cold milk instead of steamed.

But sometimes customers order this drink upside down, which reverses the order of the addition of each component. It becomes espresso on the bottom with caramel drizzle, then steamed milk and vanilla syrup on top.

This upside-down order annoys some baristas because it’s pretty much just a fancy way of ordering a vanilla latte with caramel drizzle.

This drink has always been a bit odd to me. Similar to the hot cappuccino, the iced cappuccino is half milk and half milk foam over espresso.

If cold foam is not specified, hot foam is placed over the iced drink.

This can be disappointing to a customer because the ice melts quickly, making the drink very watered down. And sometimes customers are bummed because they’d expected their iced cappuccino to be like an Iced Capp, which is a Frappuccino-like drink from fellow coffee chain Tim Hortons.

I’ve rarely had a customer ask for this and know what they were getting â€” most of the time when someone ordered this I ended up making them a new drink.

This drink is just so wrong. As I mentioned, cappuccinos are supposed to be half foam and half steamed milk with espresso.

Without any foam, it’s basically just a latte.

I was a Starbucks barista for 2 years, here are 12 of the biggest things I learned

A former Starbucks barista shares 11 of the best things to order, from secret drinks to desserts

10 things you should never do at Starbucks, according to a former employee