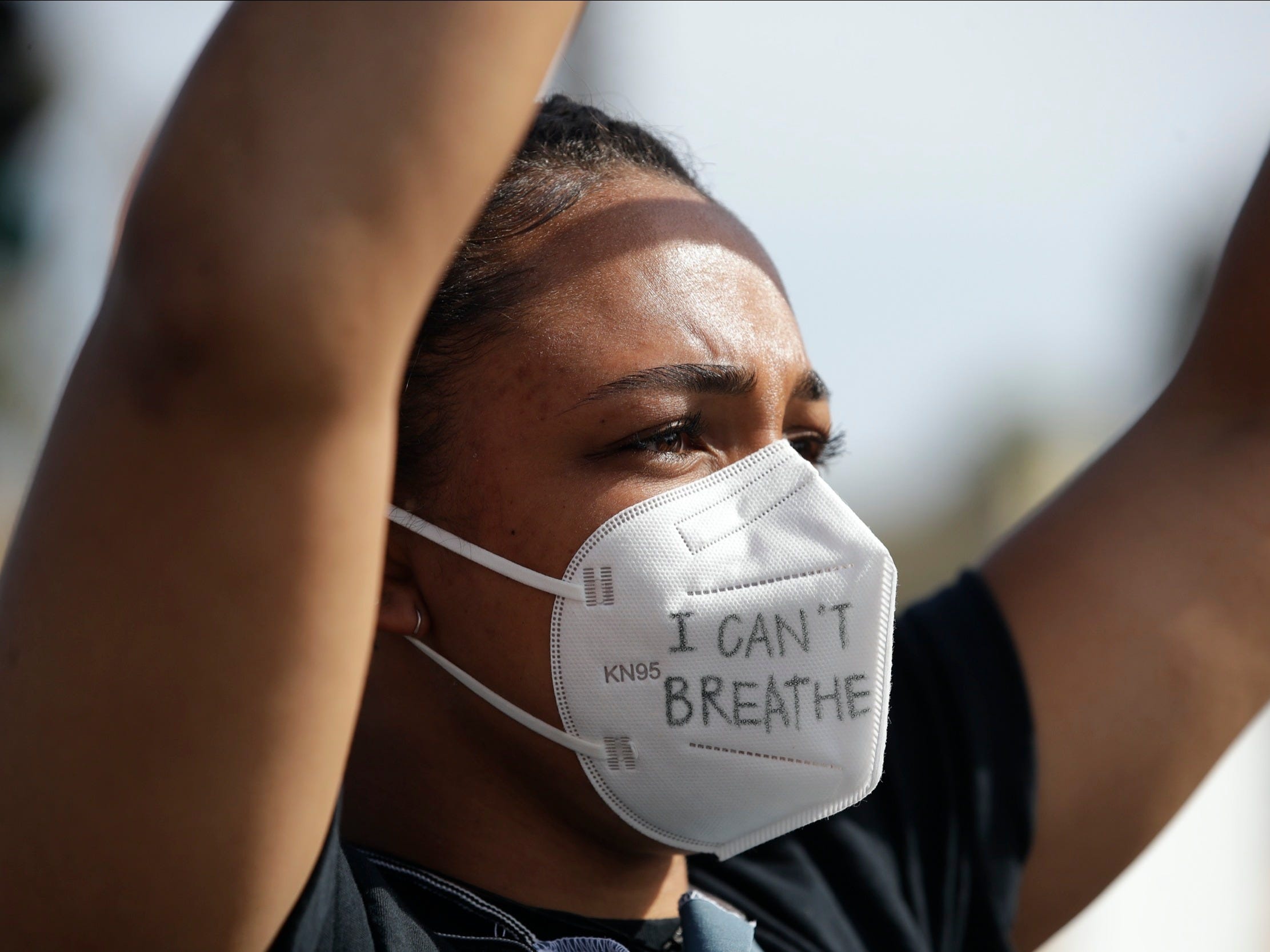 AP Photo/Marcio Jose SanchezPeople want to wear their Black Lives Matter masks at work, as well as at protests.

When 19-year-old Ma’Kiya Congious wore a Black Lives Matter mask to work at a Fort Worth, Texas Whataburger, she was not trying to be political.

“It’s just a statement that says ‘Black Lives Matter’ â€” because we do matter,” Congious said during a press conference last week.

However, when a white customer threatened to call Whataburger’s corporate, Congious says higher-ups told her she should no longer wear her Black Lives Matter mask to work.

“You’re entitled to your personal opinions, that’s fine,”Congious’ manager said in a recording obtained by the Fort-Worth Star Telegram. “But at Whataburger we don’t want to portray them because some people may be offended. This is a big business… Whataburger doesn’t want to get into anything political because we’re just hamburgers and fries.”

Congious then proceeded to ask about giving her two weeks notice, though she says she did not indicate she was quitting at that time. A manager responded by telling Congious that she did not need to return to her job ever again. When Congious pressed management for further information on Whataburger’s mask policy and the comment about her resignation, the Star-Telegram reports, management called the police.

Last week, Congious filed a complaint with Texas officials against Whataburger, saying she was forced out of her job due to racial discrimination. Congious isn’t alone in her decision to wear Black Live Matter gear at work, or in saying she faced negative consequences for her actions.

Companies including PetSmart, Wawa, and Taco Bell have faced backlash after workers said they were fired after wearing Black Lives Matter masks on the job. Kroger and Whole Foods employees have taken legal action against their employers, arguing the enforcement of bans on BLM gear violated their rights.

Whataburger said in a statement to Business Insider that Congious “voluntarily resigned due to a disagreement over our company uniform policy,” and that the company does not allow any “non-Whataburger messaging” on clothing. 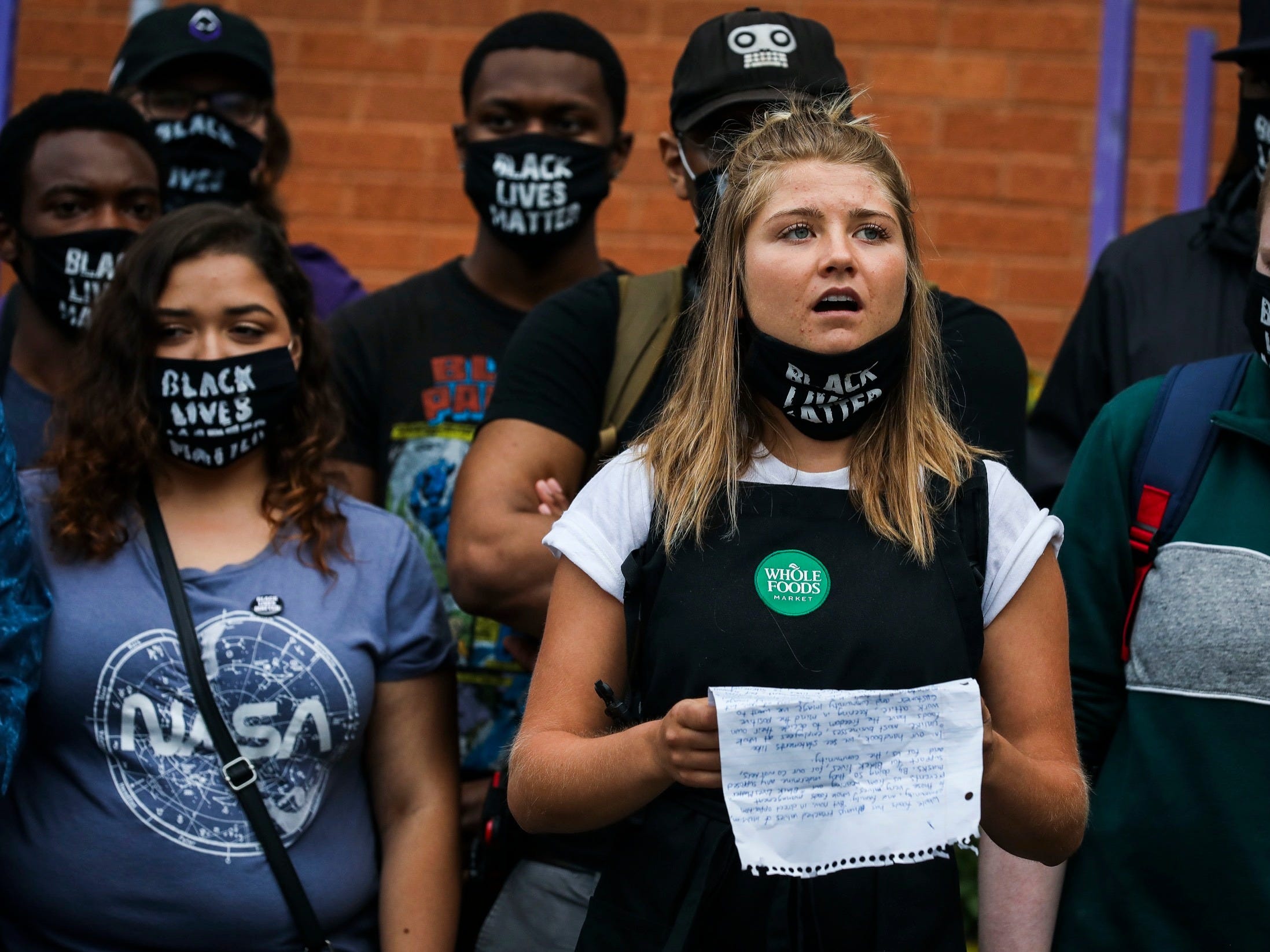 Last week, Washington labour union United Food and Commercial Workers Local 21 filed an unfair labour charge with the National Labour Relations Board against supermarket chains QFC and Ralphs, both of which are owned by Kroger.

“It’s not a white thing, it’s not a Black thing â€” it’s a people thing,” Sam Dancy, a union shop steward who works at a QFC in Seattle, told The Seattle Times. “It’s a human right â€” and it is our right to wear these buttons.”

Dancy’s reasoning echoes that of Savannah Kinzer, a Whole Foods employee who was sent home from work for wearing a BLM mask at a store in Cambridge, Massachusetts this summer.

“It is possible it’s uncomfortable for people, but it’s not political,” Kinzer told Business Insider in July. “It’s human rights. It is a simple, simple statement: Black lives matter, that’s it. They matter.”

Kinzer is among the 28 Whole Foods and Amazon employees in nine states who filed a federal suit against the grocery chain and its parent company Amazon. The class-action lawsuit, filed in July, claims that workers were prevented from wearing Black Lives Matter gear on the job, with some employees saying they were sent home without pay or threatened with termination.

“Although Whole Foods had not previously strictly enforced its dress code policy (and had not disciplined employees for wearing other messages, including political messages), the company began sending employees home without pay for wearing Black Lives Matters masks,” the lawsuit states.

Do workers have a chance at winning in court? 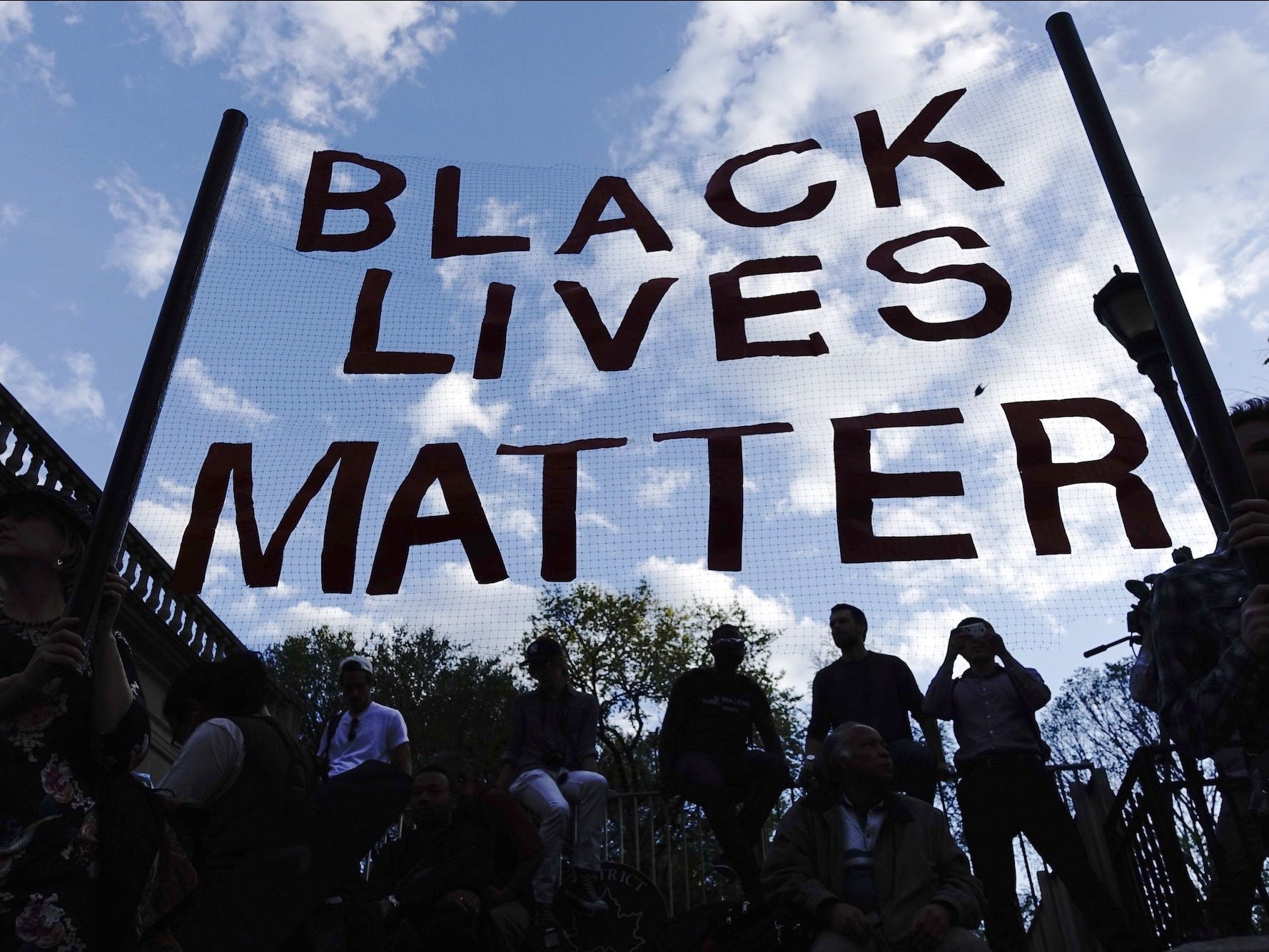 Companies have pushed back against workers’ allegations that they are targeting people supporting Black Lives Matter. Instead, Whataburger, Whole Foods, and other brands said that corporate policies prevent employees from wearing masks or apparel with messages of any kind.

“It’s important for our customers to understand the purpose behind this policy,” Whataburger said in a statement. “If we allow any non-Whataburger slogans as part of our uniforms, we have to allow all slogans. This could create tension and conflict among our employees and our customers. It is our job as a responsible brand to proactively keep our employees and customers safe.”

Whole Food’s dress code policy similarly bars employees from wearing clothing with visible slogans, messages, logos, or advertising that are not company-related. A representative told Business Insider that “no Team Members have been terminated for wearing Black Lives Matter face masks or apparel.” The grocery chain declined to comment on pending litigation.

Kroger did not respond to Business Insider’s request for comment. Tiffany Sanders, a QFC representative, told The Seattle Times that the grocery chain offered wristbands with text such as “Standing Together” to employees as an alternative to Black Lives Matter buttons.

Workers’ lawsuits will be an uphill battle. Wendy Greene, a lawyer focusing on employment and discrimination and a professor at Drexel University Thomas R. Kline School of Law, said that private employers would typically be given “considerable latitude in regulating an employee’s dress while working.”

However, Greene says workers may have a case if they can prove companies’ responses are linked to racial discrimination. For example, Whole Food workers’ class action suit argues that the company turned a “blind eye” to uniform violations when employees wore rainbow pins to support LGBTQ rights.

Some companies have walked back Black Lives Matter mask bans 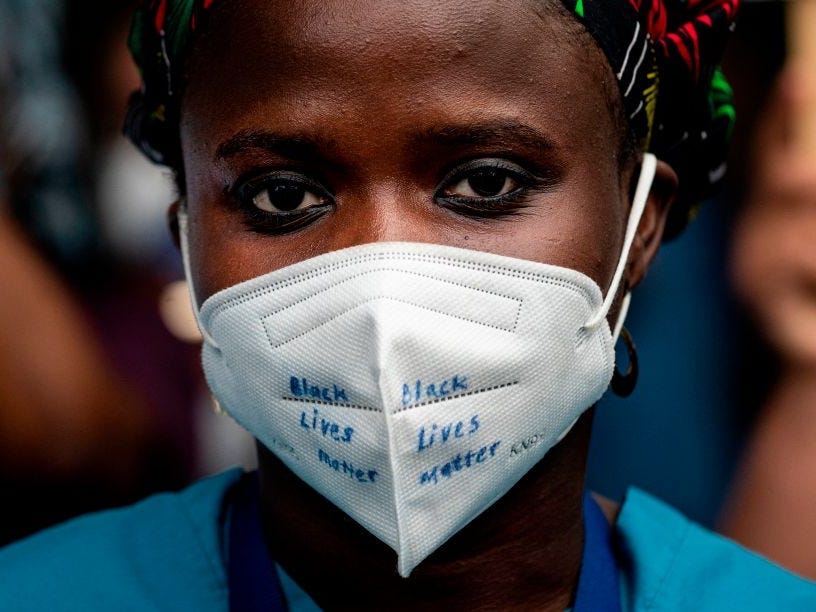 JOHANNES EISELE/AFP via Getty ImagesMasks have become a popular way for people to voice support for the Black Lives Matter movement.

Some companies that once had policies against wearing Black Lives Matter masks or punished employees for doing so have backtracked in recent months.

In June, Taco Bell apologised to a worker who was fired for wearing a Black Lives Matter mask. The fast-food chain said that the mask was not actually against the company’s policy.

Around the same time, Starbucks lifted a ban on Black Lives Matter gear after facing backlash. The coffee giant also announced it was creating a new shirt for employees to express their support for the Black Lives Matter movement.

“Until these arrive, we’ve heard you want to show your support, so just be you. Wear your BLM pin or t-shirt. We are so proud of your passionate support of our common humanity,” a memo sent to Starbucks employees read. “We trust you to do what’s right while never forgetting Starbucks is a welcoming third place where all are treated with dignity and respect.”

‘Workers want to be heard’ 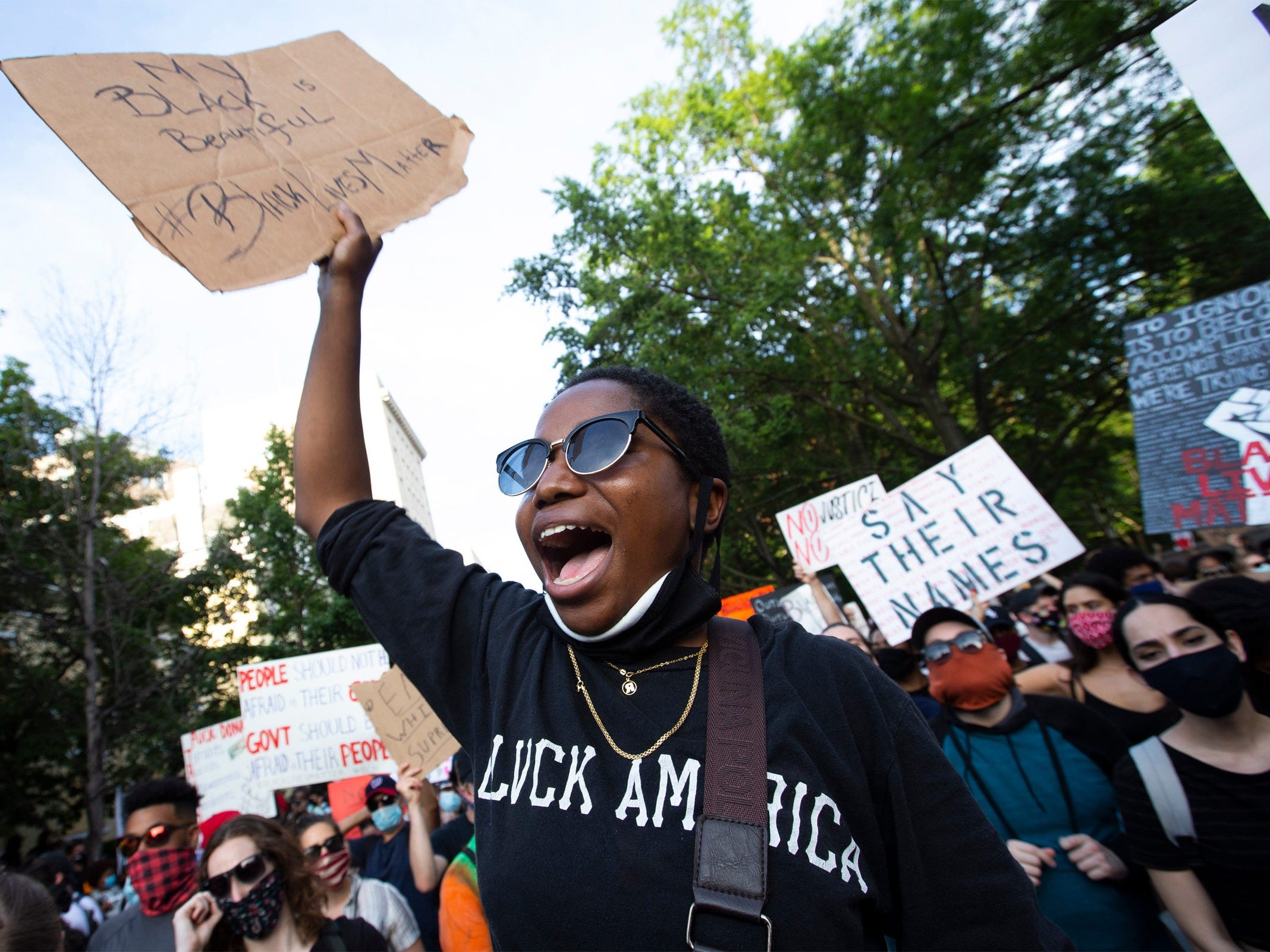 Jose Luis Magana/AFP via Getty ImagesPeople are continuing to speak out in support of Black Lives Matter.

Greene said that even if companies are unlikely to face legal repercussions for their actions, they should think twice before preventing workers from expressing support for Black Lives Matter. While not every worker will take the case to court, stories about companies banning public support of Black Lives Matter could damage their reputations.

“Employers should appreciate that instituting these grooming policies may communicate to employees and the public that their stated commitments and other efforts to combat anti-racism, and anti-Black racism, in particular, are insincere and performative,” Greene said.

Whole Foods, Kroger, and Whataburger workers have proven that they are willing to take legal action. US District Judge Allison Burroughs said in a virtual status conference related to the Whole Foods mask case that she anticipated the case to be settled outside of court.

“Whole Foods doesn’t want to litigate this for a year and have this racist label attached to them,” Reuters reports that Burroughs said. “It seems like this is going to resolve itself somewhere short of having a billion experts and a billion depositions, and I think what will come out in the end is that it was a facially neutral policy that was inconsistently applied.”

In 2020, many workers are no longer willing to follow corporate policies without putting up a fight.

Jacinta Gauda, the principal at The Gauda Group â€” a communications firm that works on branding, strategy, and diversity and inclusion â€” told Business Insider that the US has a “generation of workers who will push traditional boundaries and test the company’s commitments.”

“Increasingly, workers want to be heard, and wearing a mask, t-shirt, or hat with a powerful message gives workers voice,” said Gauda. “In today’s workplace, it is essential to give all workers a safe, risk-free way to communicate their concerns and experiences around racial issues.”