10 double standards that still exist for women in the US 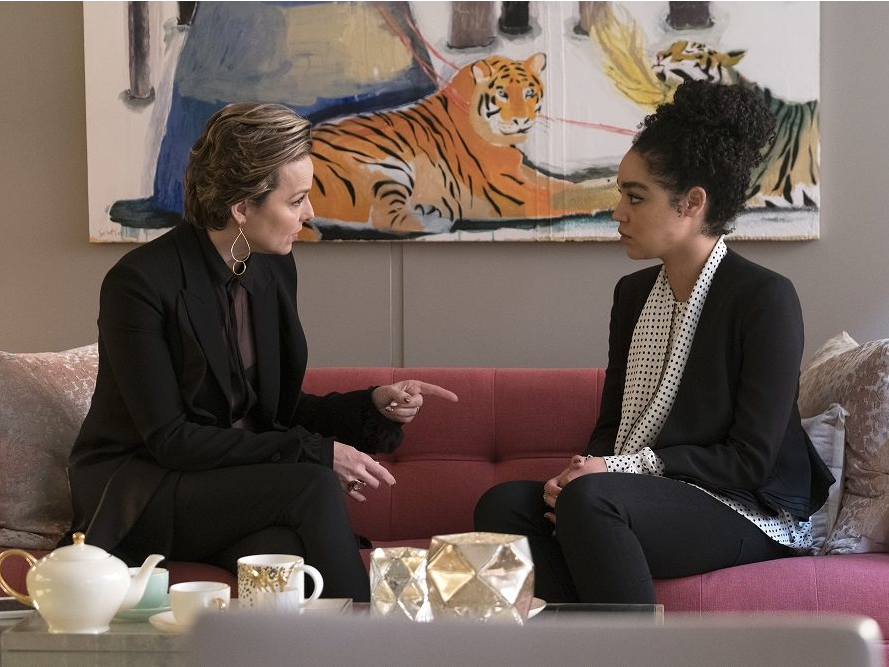 NBC UniversalWomen get called ‘bossy’ for being the boss.

The world has made incredible progress in shattering the glass ceiling and empowering women. But there’s still a long way to go.

This is by no means an exhaustive list of all of the double standards women still face, but here are 10 ways women are unfairly inconvenienced, shamed, and discriminated against just for being female in the US.

Women are still not paid the same wages as men for doing the same jobs in the US. 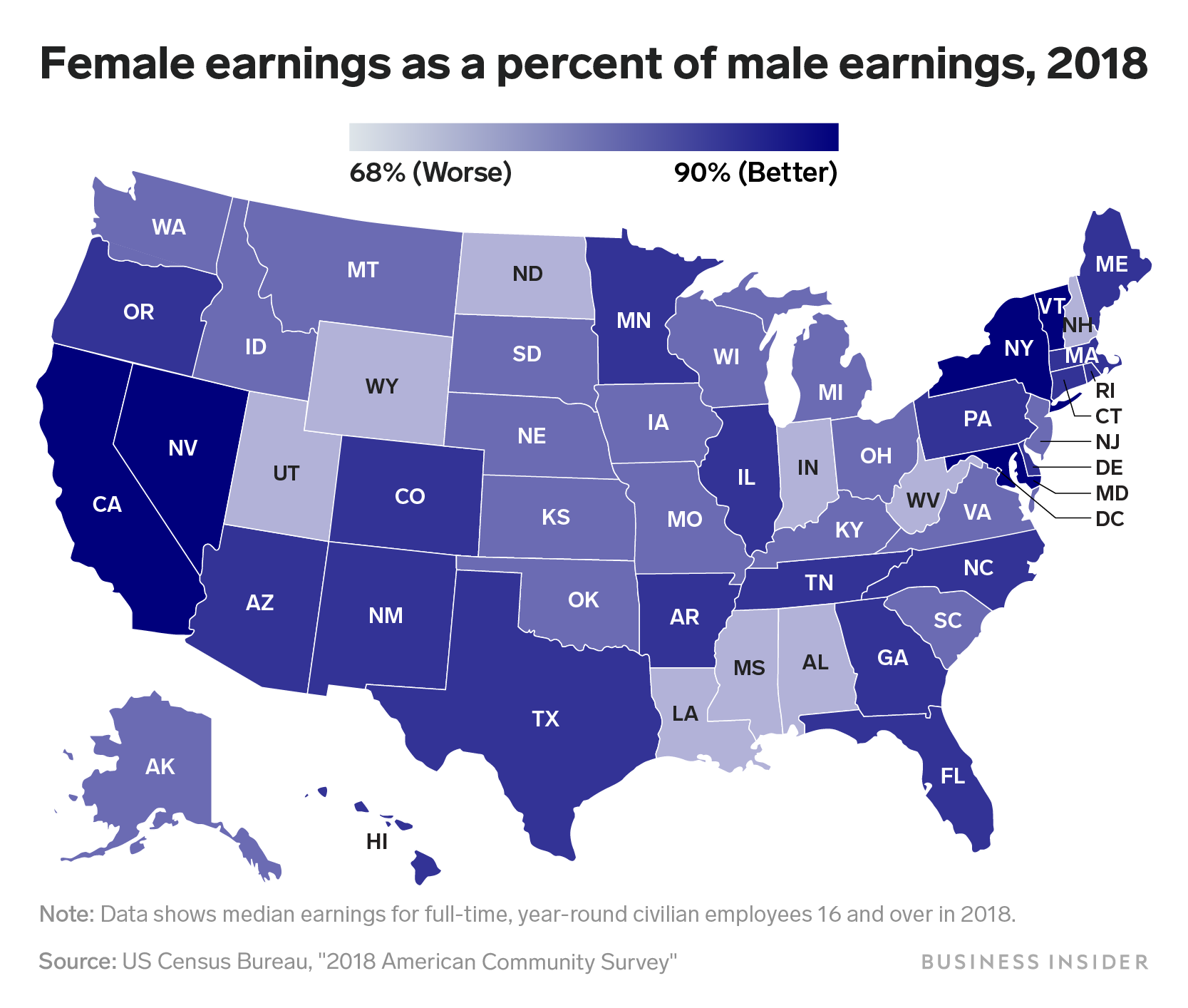 Shayanne Gal/Business InsiderHow women’s pay compares to men’s pay in each state in 2018 (the most recent data).

The Equal Pay Act was signed into law in 1963, but the US is still far from giving women equal pay for equal work.

According to data from the US Census Bureau, a woman working a full-time, year-round job earns 81.1% of what her male counterpart earns.

The gap also varies among different racial and ethnic groups. It takes white women an extra 100 days to earn what a man makes in a year. It takes Black women 226 days.

Research shows that women who have had more sexual partners are stigmatised, but men are rewarded.

iStockSleeping around is stigmatised if you’re a woman.

“According to the sexual double standard, boys and men are rewarded and praised for heterosexual sexual contacts, whereas girls and women are derogated and stigmatised for similar behaviours,” authors Derek A. Kreager and Jeremy Staff wrote.

An assertive, successful woman being seen as “bossy” and less likable than a man with a similar demeanour is just one of many subtle ways women are treated differently in the workplace.

“It’s a Catch-22,” Sonya Rhodes, Ph.D., a psychotherapist and author of new book “The Alpha Woman Meets Her Match,” previously told Business Insider. “Whatever women do at work, they have to do it nicely. But the more you back off, the more they don’t take you seriously.”

Women are still expected to change their last name when they get married. 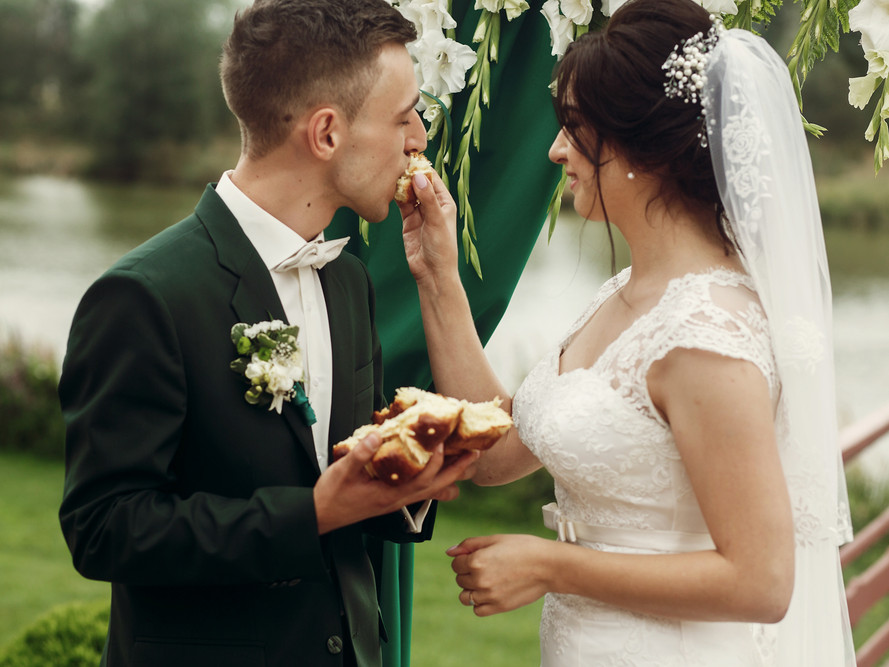 ShutterstockWomen are often expected to change their names.

The practice of a woman adopting her husband’s last name dates back to the patriarchal marriage arrangement in which a woman was transferred from her father’s ownership to her husband’s.

Even so, the tradition is still prevalent. A study of wedding announcements in The New York Times from 1971 to 2005 found that 18% of brides kept their own names. A 2011 study published in Gender and Society found that out of 1,200 adults surveyed,70% believed that a woman should be required to change her name after she gets married. And more recently, a 2017 study in Gender Issues found that women who keep their last names are viewed as less committed wives by men of lower education.

Only nine states have laws that help a man change his name after marriage.

Cleavage is prevalent in advertisements and media, but women breastfeeding their children in public are still told to cover up.

If a woman’s breasts are exposed in a sexualised or seductive way, it’s acceptable. If a woman is feeding her baby, however, many consider it inappropriate.

Victoria’s Secret model Candice Swanepoel wrote about how she has experienced this double standard in an Instagram post picturing her infant son.

“Many women today are shamed for breastfeeding in public, or even kicked out of public places for feeding their children,” she wrote. “I have been made to feel the need to cover up and somewhat shy to feed my baby in public places but strangely feel nothing for the topless editorials I’ve done in the name of art..? The world has been desensitised to the sexualization of the breast and to violence on tv…why should it be different when it comes to breastfeeding? Breastfeeding is not sexual it’s natural. Those who feel it is wrong to feed your child in public need to get educated on the benefits breastfeeding has on mother and child and in [turn] on society as a whole.”

“Dad bods” are considered attractive, but women are expected to lose baby weight after giving birth. 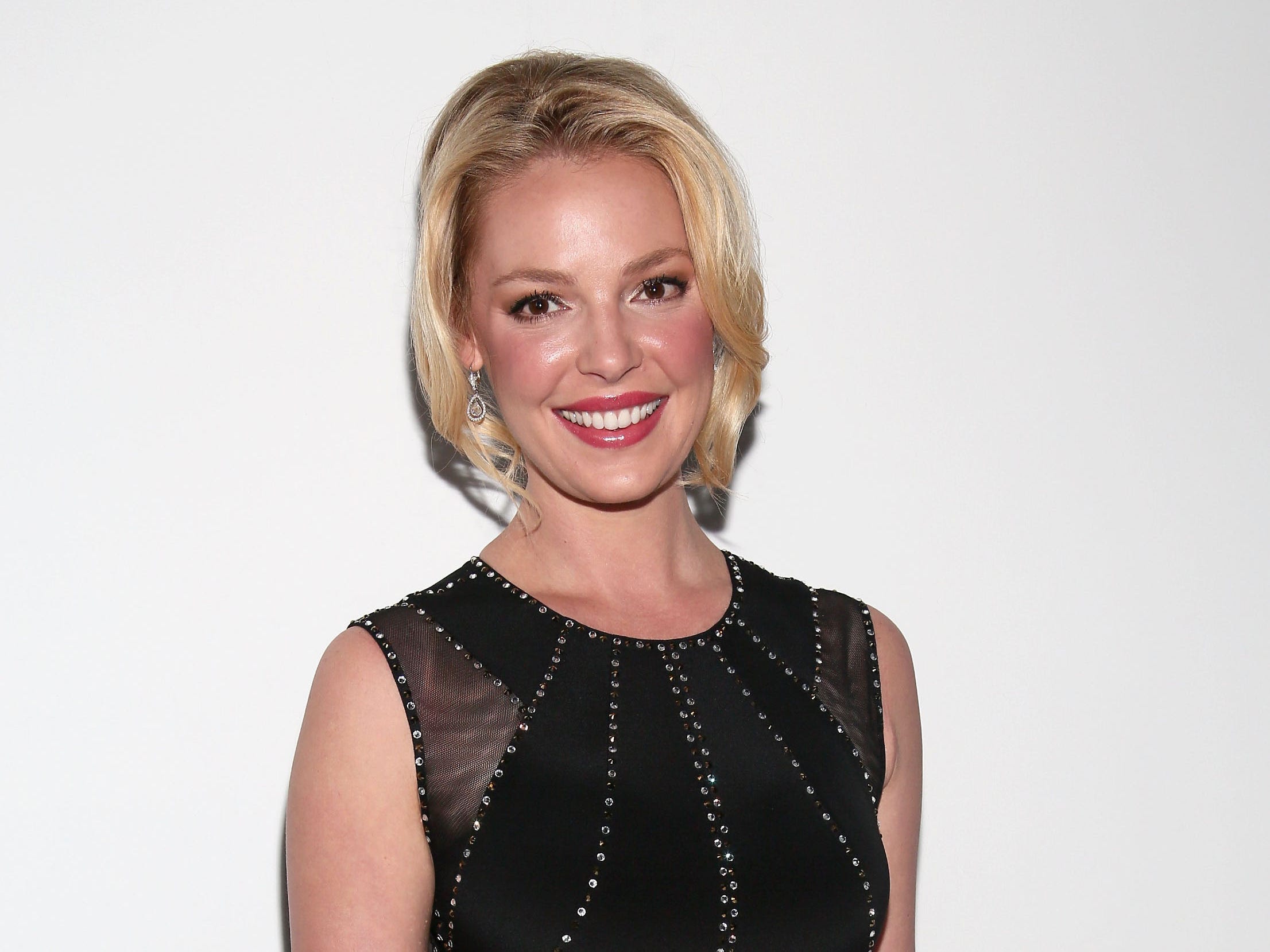 Getty/Astrid StawiarzKatherine Heigl has spoken about how women are expected to ‘snap back into shape’ after pregnancy.

A viral 2015 article on The Odyssey Online called “Why Girls Love The Dad Bod” made the term mainstream by explaining that “While we all love a sculpted guy, there is just something about the dad bod that makes boys seem more human, natural, and attractive.” Now there are “dad bod” fanny packs and “Dad Bods and Dogs” calendars celebrating the body type.

Women, however, are expected to “snap back into shape” after having a baby, as Katherine Heigl (pictured) put it after having her son Joshua Jr. Celebrities and fitness bloggers alike have spoken out about the pressure to lose baby weight.

“I have to keep reminding myself that it took nine months to grow Mia, so it’s probably going to take at least the same amount of time for my body to recover,” fitness blogger Emily Skye wrote on Instagram.

Men are disproportionately praised for taking care of their children, whereas women are expected to be caregivers. 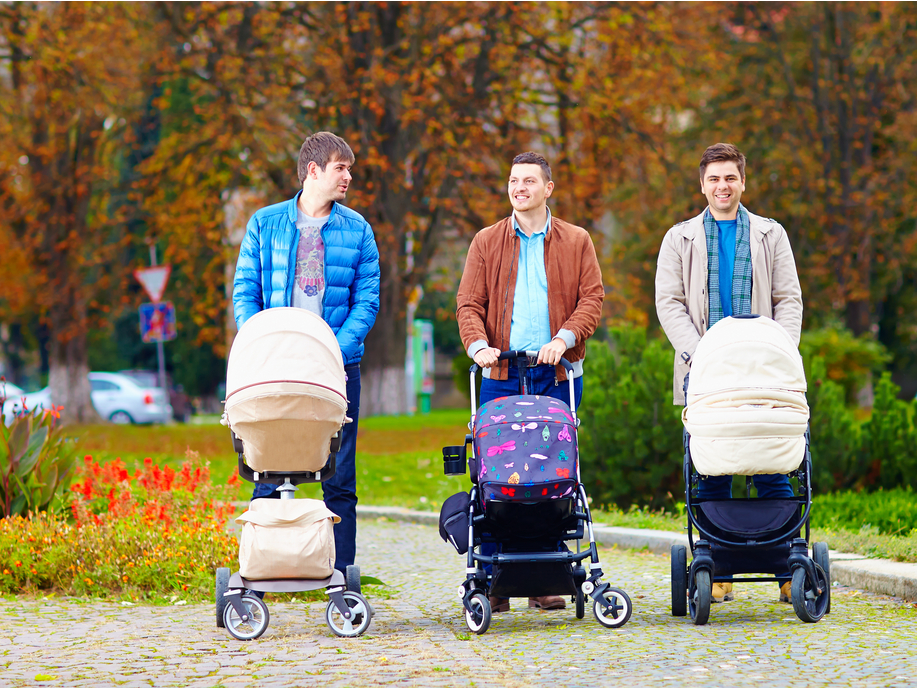 Olesia Bilkei/ShutterstockDads should be equal parents.

A 1998 study in Psychology of Women Quarterly found that fathers reported more praise than mothers for their involvement in parenting, and mothers were more often praised for their ability to successfully combine work and family. This double standard remains in place today. A woman who takes care of her kids is simply doing what is expected of her, but a man who takes care of his kids is an exceptional, involved father.

Actress Jenny Mollen addressed this double standard in regard to her husband, Jason Biggs.

“People often ask me if I feel lucky that @biggsjason is such an involved dad and the answer is, no. I expect him to be a good father! That’s why I had kids with him,” she wrote on Instagram. “Nobody would ever say to a man, ‘wow, you are so lucky your wife feeds and bathes your children.’ For women, it’s expected to love and protect and show up for soccer practice. For men, an hour or two alone with the kids on a weekend somehow warrants a trophy. (Or at least a World’s Greatest Dad mug.) This double standard is antiquated and insulting. If your partner isn’t hands on, he shouldn’t have hands.”

Any parenting decision a woman makes is subject to “mum shaming.” 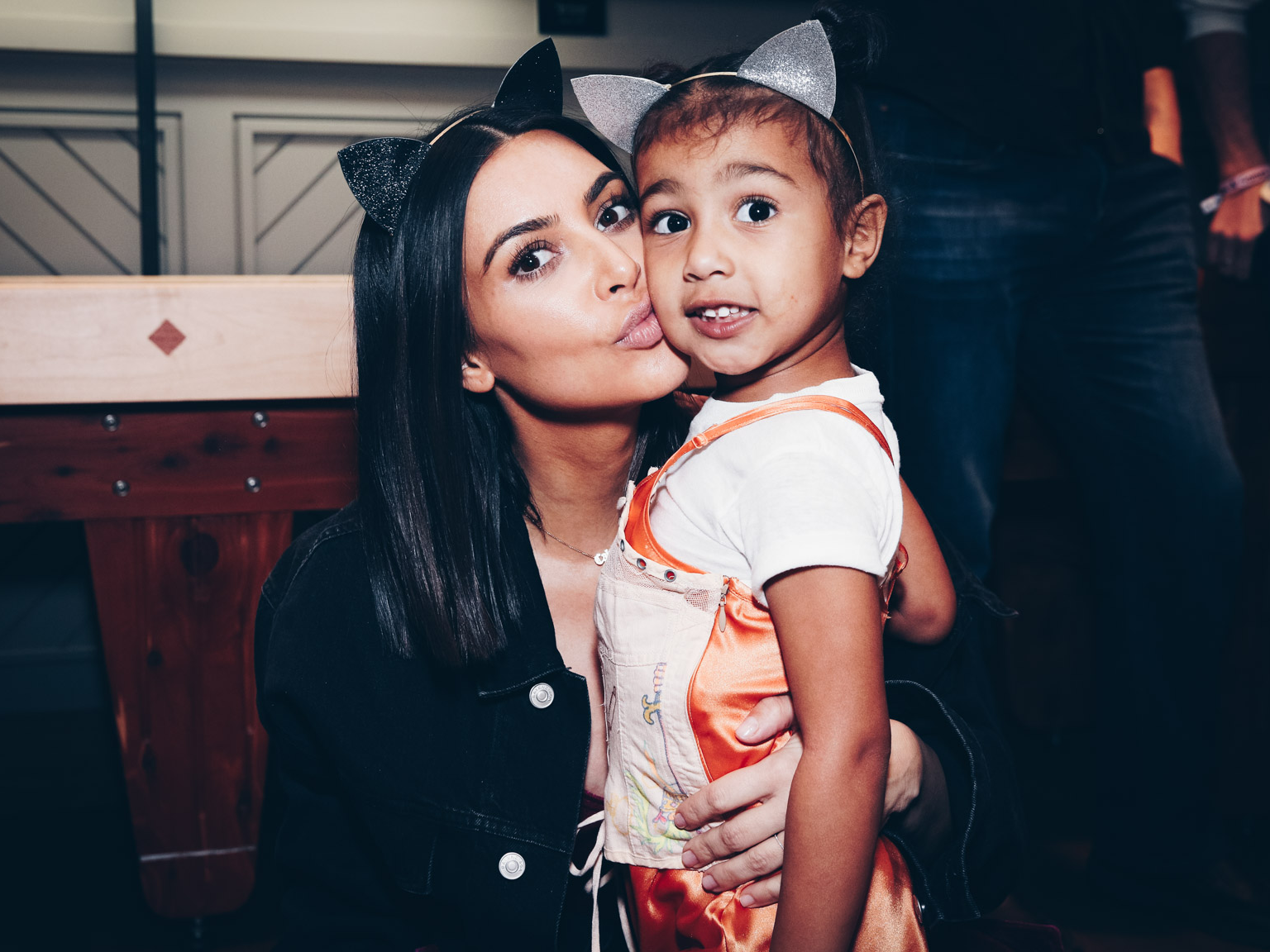 A study conducted by the C.S. Mott Children’s Hospital National Poll on Children’s Health from the University of Michigan surveyed 475 mothers with at least one child under the age of 5 years old and found that six out of 10 mums reported that they had been shamed for their parenting choices. It’s even causing some mothers to develop “maternal anxiety,” meaning that they constantly question themselves and the decisions they make regarding their kids.

“The blaming of mothers is intimately connected to cultural anxieties around the changing social roles of women,” Natalie Boero writes in a chapter of “The Fat Studies Reader” about how mothers are often blamed for the “epidemic of childhood obesity.”

Women pay more for the same everyday items because of the “pink tax.” The “pink tax” refers to how products for women, like razors in “feminine” colours, are often pricier than the men’s equivalent.

From everyday items like deodorant and clothing to services such as haircuts and dry-cleaning, to mortgages and car insurance,women are paying more than men for necessities.

Women may be more likely to die of a heart attack if they have a male doctor. 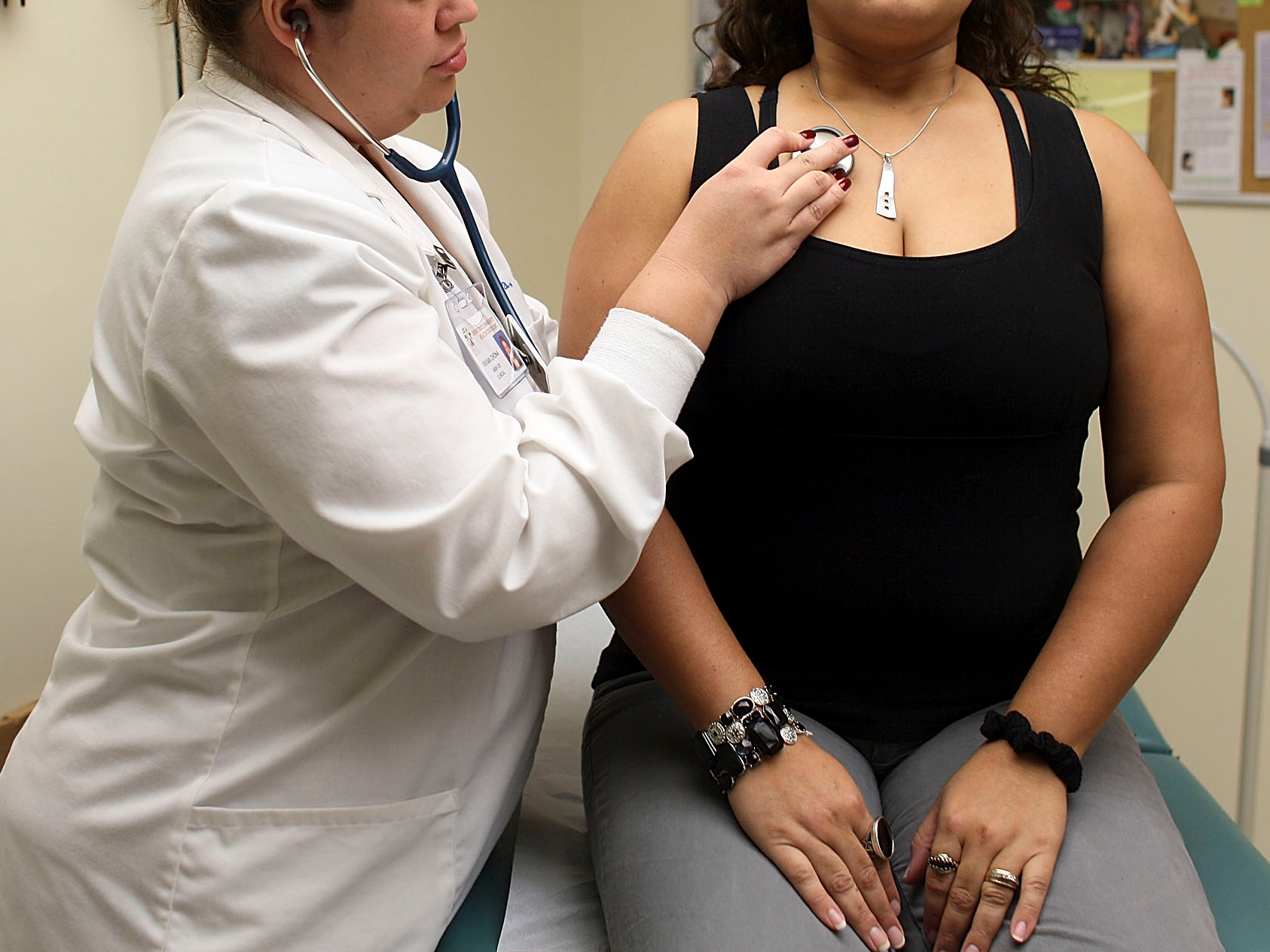 Women who have heart attacks are more likely to die if their emergency room doctor is male, but more likely to live if their doctor is female, according to a 2018 study published in Proceedings of the National Academy of Sciences. Male doctors with more female colleagues also gave more effective treatment to female patients.

The study couldn’t determine the reason for this gap, but one key takeaway was that women and men have different heart attack symptoms.