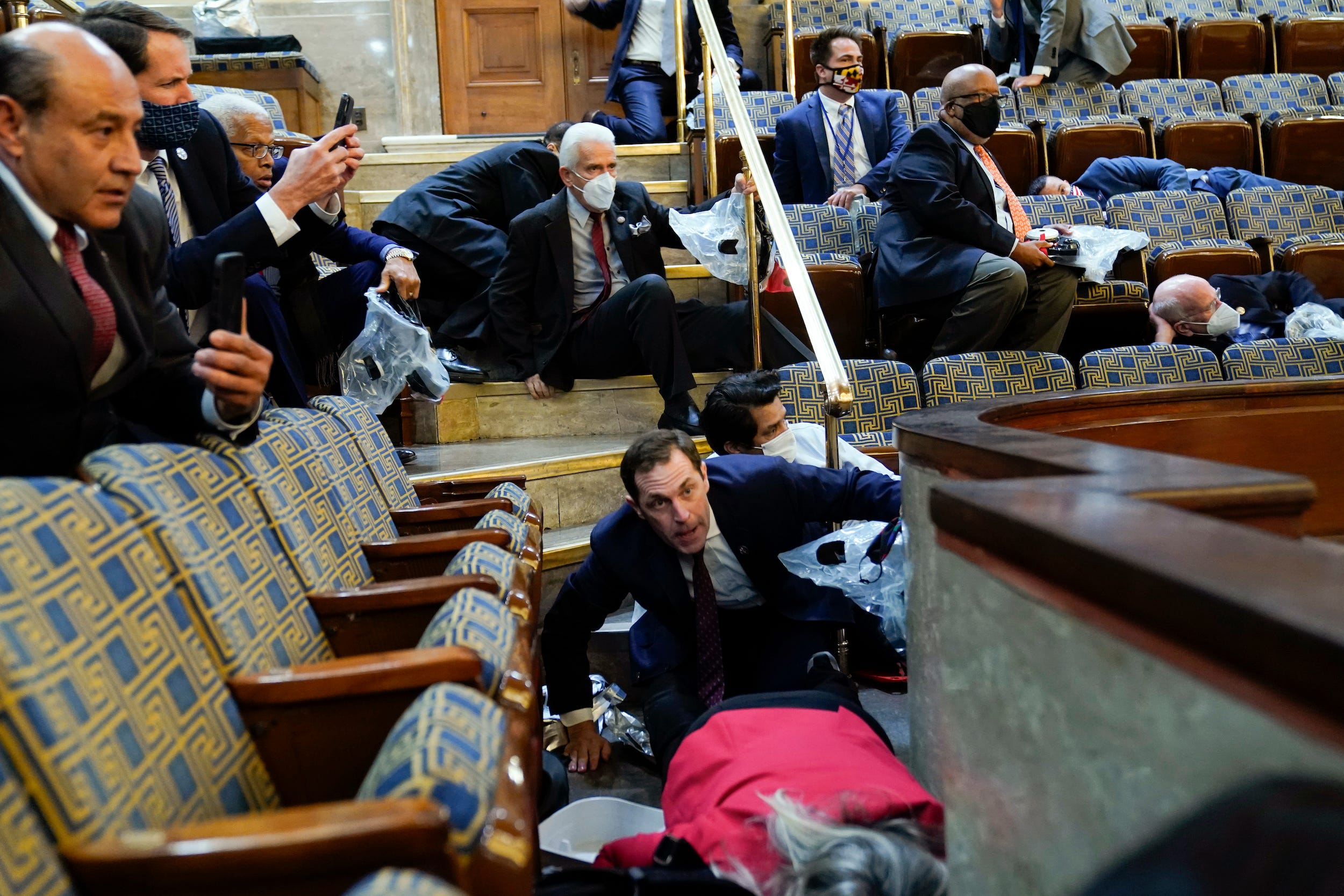 Andrew Harnik/AP PhotoPeople shelter as rioters try to break into the House chamber at the US Capitol on January 6.

A woman died after being shot in the Capitol on Wednesday as violent and armed supporters of President Donald Trump stormed and occupied the building, law enforcement officials told NBC News and DC police told the Washington Post.

A local TV station in San Diego, KUSI, has since reported that the woman’s husband identified her as Ashli Babbitt. She was an Air Force veteran who described California’s coronavirus-related stay-at-home order as “commie bulls—” and whose social media feeds revealed her staunch support for President Donald Trump and her belief in QAnon conspiracy theories.

Lindsay Watts, a reporter with a Fox News affiliate in Washington, DC, first said on Twitter that she’d learned from a paramedic source that one person had been shot and resuscitation efforts were underway. CNN later reported that a woman had been shot in the chest and was in critical condition. PBS NewsHour confirmed this, adding that the person who was struck by a bullet was not a uniformed officer.

MSNBC reporters said that a law enforcement officer fired the shot. The circumstances surrounding the shooting remained unclear in the immediate aftermath.

Michael Del Moro, a producer at MSNBC, shared photos of a person who looked like they were bleeding while being transported on a stretcher.

A person on a stretcher just wheeled out with what appears to be a serious injury. pic.twitter.com/wucrpusBzE

The Washington Examiner shared a graphic video of the chaotic scene inside the Capitol and reported that the woman was shot in the neck.

According to a Fox News report a few hours later, the then-unidentified shooting victim was transported from the Capitol. It was unknown where she was taken. NBC News broke the news of her death just before 6 p.m.

House Minority Leader Kevin McCarthy confirmed the shooting in an interview with Fox News earlier in the day, saying, “I’m with Capital Police. I heard on the radio: ‘Shots fired.'”

“I have been in this Capitol for more than 10 years, and I’ve never seen anything like this,” McCarthy added.

Congress met on Wednesday to certify the Electoral College votes for President-elect Joe Biden. But the session was interrupted by the violence, and the House is now in recess with members of Congress, including Vice President Mike Pence, being led to safety.

Photos from around the nation’s capital showed massive crowds of people milling around, some of whom were carrying American and Trump’s “Make America Great Again” flags. Dozens of ambulances and law-enforcement vehicles were also spotted, as were nooses.

The melee inside the building, which was breached, evacuated, and rocked by flash bangs, involved an apparent armed standoff between police and rioters, both of whom were armed, as well as Trump supporters breaking into and leaving notes in lawmakers’ offices. CNN also reported that a police officer had been injured in the scuffle.

The insurrection, which earned a mild rebuke on Trump’s Twitter page, forced Virginia Gov. Ralph Northam to dispatch the National Guard and state troops to the Capitol.

Trump then released a video for his supporters, saying in it: “This was a fraudulent election, but we can’t play into the hands of these people. We have to have peace. So go home. We love you; you’re very special. You’ve seen what happens. You’ve seen the way others are treated that are so bad and so evil. I know how you feel. But go home, and go home in peace.”