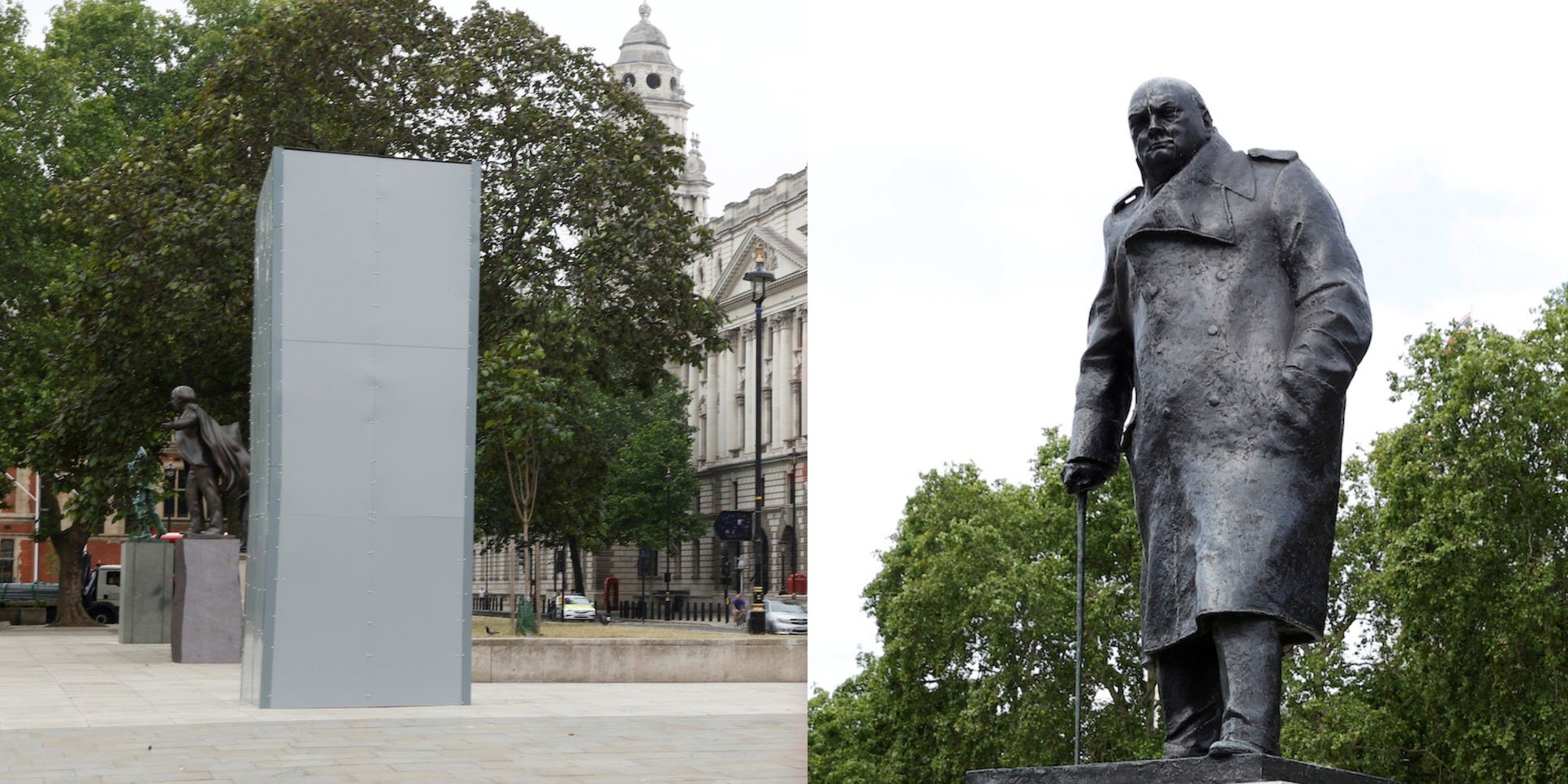 Reuters/John SibleyA composite photo of the statue in Parliament Square, London of Winston Churchill, sent on the right normally and on the left in a protective box on June 12, 2020.

A statue of Winston Churchill outside the UK Houses of Parliament has been covered by a box amid ongoing protests in support of Black Lives Matter, sparked by the police killing of George Floyd.

Statues of Nelson Mandela, also in Parliament Square, and the Cenotaph on Whitehall have also been covered up, London’s city government said in a Friday press statement.

Several Black Lives Matter protests are planned in central London for the coming days, some not far from the monument, according to The i, a British newspaper.

The Churchill statue’s base was earlier defaced during a Black Lives Matter protest on Sunday. The engraved word “Churchill” was crossed out and the words “was a racist” written underneath in black spray paint, among other efforts. 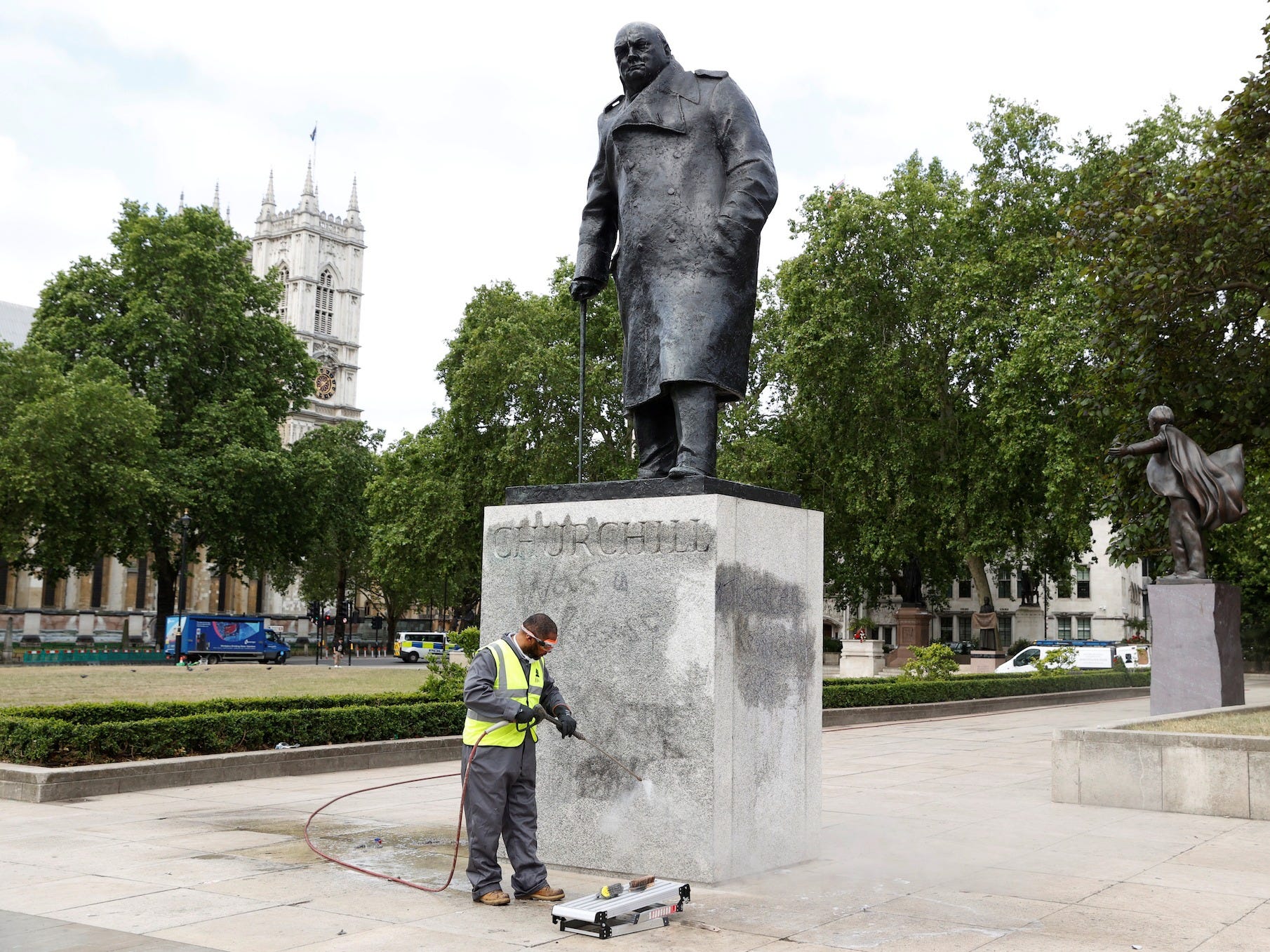 John Sibley/ReutersA council employee cleans graffiti from the statue on June 8, in the aftermath of protests against the death of George Floyd.

The move comes amid widespread debate about statues that honour figures from Britain’s colonial and slave-trading history. On June 7, a statue of former slave trader Edward Colston in the city of Bristol was toppled and sunk into a nearby quay.

In a Twitter thread, Prime Minister Boris Johnson – who is a personal admirer and biographer of Churchill – said it was “absurd and shameful” that his statue is at risk of damage during the protests. He said Churchill saved the country from a “fascist and racist tyranny.”

It is absurd and shameful that this national monument should today be at risk of attack by violent protestors. Yes, he sometimes expressed opinions that were and are unacceptable to us today, but he was a hero, and he fully deserves his memorial. 2/8

“It is it is clear that the protests have been sadly hijacked by extremists intent on violence,” he added in the thread.

The covering up of the Churchill statue excited comment on social media. However, the Daily Mirror’s political editor Pippa Crerar said that this is not an unusual move before planned protests.

It has happened before. Seems like a sensible precaution to protect the statue, which has also been defaced before – including in the May Day protests in 2000 and student protests in 2010.

The graffiti from Sunday’s protest had been cleaned.

The the statement confirming the covering of the statues, London Mayor Sadiq Khan said: “I stand with the millions of people around the world who are saying loud and clear that Black Lives Matter,” and emphasised that the London protests have been mostly peaceful.

However, he expressed concern about further protests spreading the coronavirus and leading to “disorder, vandalism and violence,” saying that far-right extremists are planning counter-protests.

“Any violence or criminal damage from anyone is always absolutely unacceptable and will simply not be tolerated in our city,” he added.

A spokesperson for the Greater London Authority did not say when the coverings would be removed.