Retired Navy SEAL commander who led the Osama bin Laden raid tells MIT 2020 graduates: "To save the world, you will have to be men and women of great integrity." 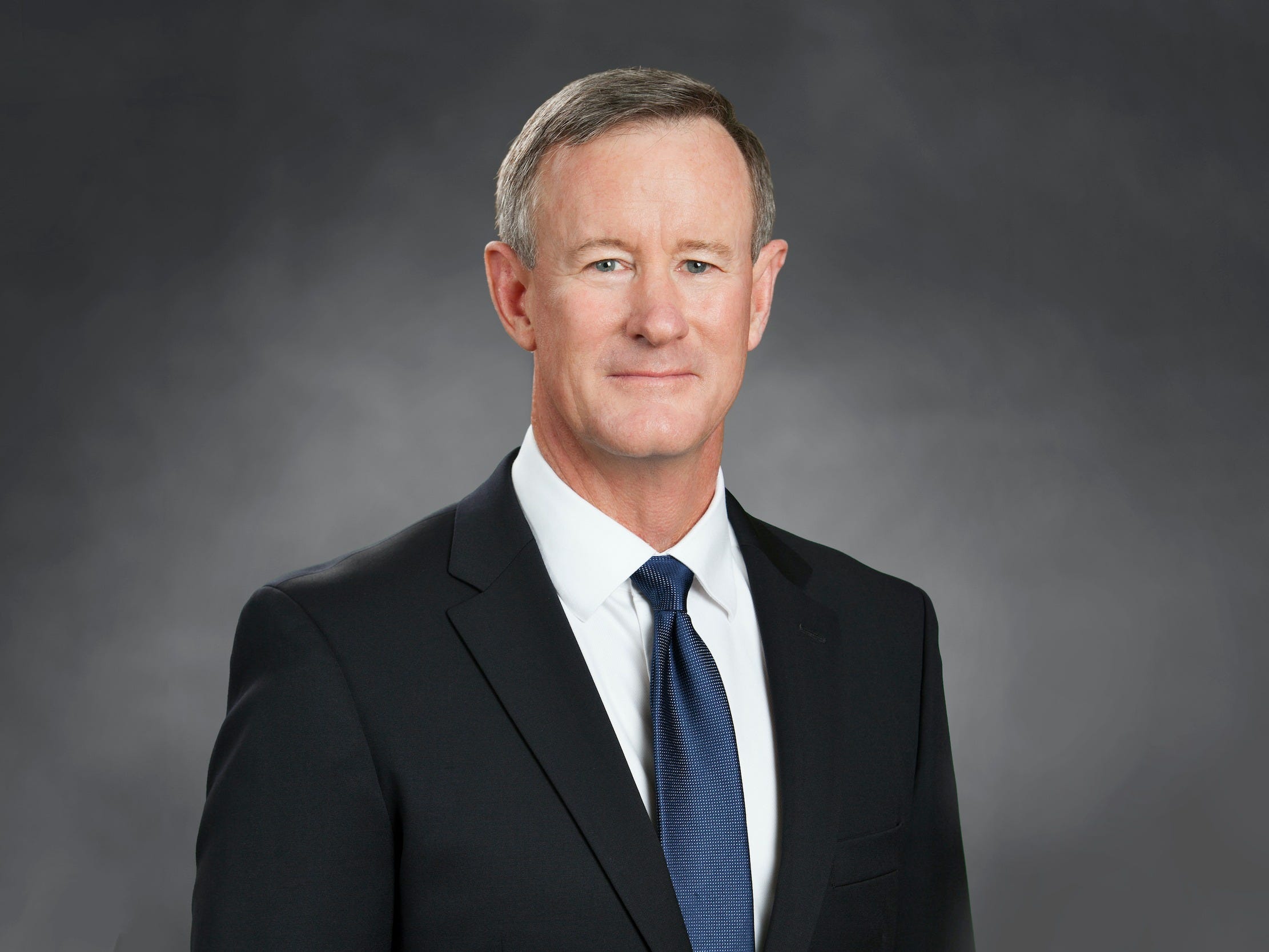 Thank you very much for that kind introduction. President Reif, distinguished guests, members of the faculty, and of course, the MIT graduating class of 2020. It is truly an honour for me to have the opportunity to address you today.

I had an entirely different speech prepared for this afternoon. It was a nice little speech. It was about how you, the brilliant men and women of MIT are like the Navy SEALs of academia. I made some good analogies. I had some cute little anecdotes and some lessons from my career. But somehow, that speech just didn’t seem right in light of all that has happened in the past five months. The fact that I am standing here alone, and that you are isolated somewhere at home, is proof enough that the world has changed.

But there is a part of the speech that I retained. It was the part about heroes and how after all these years I came to realise that the heroes we need are not the heroes I had been looking for. When I was a young boy growing up in the ’50s and ’60s, I always envisioned myself as the hero. I always wanted to be Superman, with his powers to fly, with his invulnerability, with his super strength. A hero who saved the world every day from some catastrophe. Or Batman, Spiderman, the Black Panther, the team of the X-men, and the Fantastic Four, and my favourite of all – Aquaman. I so wanted to ride on the back of a seahorse and fight evil underwater.

But as I grew up and travelled the world, and as I saw more than my share of war and destruction – I came to the hard truth that Captain America isn’t coming to the rescue. There is no Superman, no Batman, no Wonder Woman, no Black Widow, no Avengers, no Justice League, no Gandolf, no Harry Potter, and no Aquaman. If we are going to save the world from pandemics, war, climate change, poverty, racism, extremism, intolerance – then you, the brilliant minds of MIT – you are going to have to save the world.

But, as remarkable as you are, your intellect and talent alone will not be sufficient. I have seen my share of real heroes, on the battlefields in Iraq and Afghanistan, in the hospitals fighting COVID-19, on the streets keeping America safe and open – and I know that there are other qualities necessary to be today’s hero. So, if you will bear with this old sailor for a minute or two, I would like to offer some thoughts on the other qualities you will need to help save the world.

First, you must have courage. Winston Churchill once said that courage was the most important quality of all because it guaranteed all the rest. He was not just talking about the physical courage to charge the hill, run into a burning building, or stop a madman with a gun. He was also talking about moral courage. The courage to stand up for your convictions. Physical courage has long been the hallmark of a great warrior, but I would offer that the moral courage to stand up for what’s right has an equal place in the pantheon of heroes.

But if your cause is good and decent and worthy and honorable and has the possibility of saving even one of God’s creatures, then you must do what all heroes do. You must summon the courage to fight and fight hard for your convictions. You must yell them from the mountaintop. You must shout them from the lectern. You must write in bold, cursive, and underlined phrases. You must bring your convictions out from the darkness and the subtly of your heart – into the light of day. They must be made public and challenged and confronted and argued.

There will always be those who don’t want to hear your convictions. Particularly if they are true.

Speaking the truth can be dangerous at times. But those that came before you, Copernicus, Galileo, Kepler, Madam Curie, Grace Hooper, and Katherine Johnson – those brilliant minds, those tellers of truth, who made the world a more knowledgeable place, a more compassionate place, a more livable place, they had courage. If you are going to save the world, you will need courage.

If you are going to save the world, you will need to be humble. In my career, I have been blessed to be around some great minds. I have seen how the brilliant men and women have helped eradicate disease, reduce poverty, create technological masterpieces but, conversely I have seen how the misguided geniuses, filled with conceit and convinced of their own righteousness, have tampered with nature, built apocalyptic machines, dehumanized social interaction, and tilted toward tyranny. If you do not approach the world with humility, it will find a way to humble you quickly.

I found in my time in the military that no experience on earth was more humbling than combat. The crucible of war teaches you everyday that you are not invincible – that the enemy in bare feet and carrying only Kalashnikovs can sometimes defeat the best soldiers and the best technology in the world.

And if you believe for a moment that you are superior, you will be humbled quickly. But if you approach every mission with a decent respect for the mountains, the rivers, the oceans, and the enemy – you are more likely to succeed.

In Plato’s great rendition of Socrates Apology, Socrates defends the charges against him by telling the jury of Athenian nobles that he is the wisest man in the world – far wiser than any of the robed men sitting in judgment. When questioned about how he could be so bold as to make this statement, Socrates says that he is the wisest because he knows so very little of the world. To solve the world’s problems you will have to realise how little you know. You must be able to look to the stars, peer through a microscope, gaze at the ocean – and be humbled.

To believe for even a moment that you have all the answers, that you know the truth of the universe, that you are wiser than all the men and women who came before you, is the tale of every great man and woman who amounted to nothing. Only when you are humble, only when you realise the limits of your understanding, the shortfalls of your knowledge, the boundaries of your intellect – only then can you find the answers you are seeking.

If you are going to save the world you must persevere through the difficult times. Life as a SEAL is all about perseverance. Can you make it through SEAL training without ringing the bell? Can you make it through the long family separations, the exhausting deployments, the loss of a fellow warrior in combat? Sometimes saving the world is just about holding on. Never quitting no matter what obstacles face you.

A good friend of mine, who graduated from the University of Texas in 1969, pursued a career in medicine. His mother had died of Lymphoma when he was eleven and he was obsessed with finding a cure. For decades, he pursued an idea that most in the medical field dismissed as fantasy. Could the human body really use its own immune system to fight cancer? He never gave up on his pursuit and in 2018, Dr. Jim Allison was awarded the Nobel Prize for Medicine.

There are the occasional great men and women of science who changed history at an early age, but most discoveries, most achievements, most triumphs are the product of a long and painful process and only the most resolute, the ones that can persevere through the failure, the rejection, the ridicule, the emotional and physical strain of time – those are the ones most likely to save the world.

If you hope to save the world, you must be prepared to sacrifice. The special operation forces are filled with memorials of remarkable men and women who gave their all in the defence of the nation. Medal of Honour recipients like Mike Murphy, Mike Monsoor, John Chapman, and Robby Miller. Remarkable women like Ashley White and Jennifer Moreno. The heroes of helicopters Turbine 33 and Extortion 17 – SEALs and soldiers who answered the call and never returned. All great Americans who sacrificed their lives so that their teammates might live.

But, there is a more mundane, yet still essential sacrifice, that is required if you want to want to save the world. As SEALs we train every day. Long tortuous hours of hard physical pain, ruck sac marches, open ocean swims, miles of running, and hours of calisthenics. They are all sacrifices necessary to be ready – when the world needs you.

In his time, Thomas Edison developed 1,500 patents. From the electric light, to the phonograph, to the movie camera, to the vacuum diode, and the carbon microphone. He saved the world from darkness. But in doing so it required him to work 20 hour days, his home front was often strained, his other business ventures struggled to survive, and his health always seemingly in jeopardy.

It would be easy to stand up here and tell you that there is wondrous place where you can be great at both work… and life, where your efforts to make a difference in the world come easy – but I have never found that place. In the end, if your goal is a noble one, then your sacrifice will be worth it. And you will be proud of what you have accomplished.

And when you fail to uphold your integrity, it should make you sick to your stomach. It should give you sleepless nights. You should be so tortured that you promise yourself never to do it again. You see, being a hero will not be easy. It will not be easy because, you are not men and women of steel, you are not cloaked in a suit of armour, you are not infused with unearthly powers – you are real heroes. And what makes real heroes are their struggles and their ability to overcome them.

But no matter how mightily you might struggle, the world will believe in you, follow you, allow themselves to be saved – if they know you to be honest, trustworthy, of good character and good faith. Men and women of integrity.

Finally, to save the world, you must have compassion. You must ache for the poor and disenfranchised. You must fear for the vulnerable. You must weep for the ill and infirmed. You must pray for those who are without hope. You must be kind to less fortunate. For what hero gives so much of themselves, without caring for those they are trying to save.

As we sign off from this virtual commencement, I want you to promise me one thing.

Batman and Superman are not coming to save the world. It will be up to you. But never, never in my life, have I been so confident that the fate of the world is in good hands. Go forth and be the heroes we need you to be.

Thank you and congratulations!