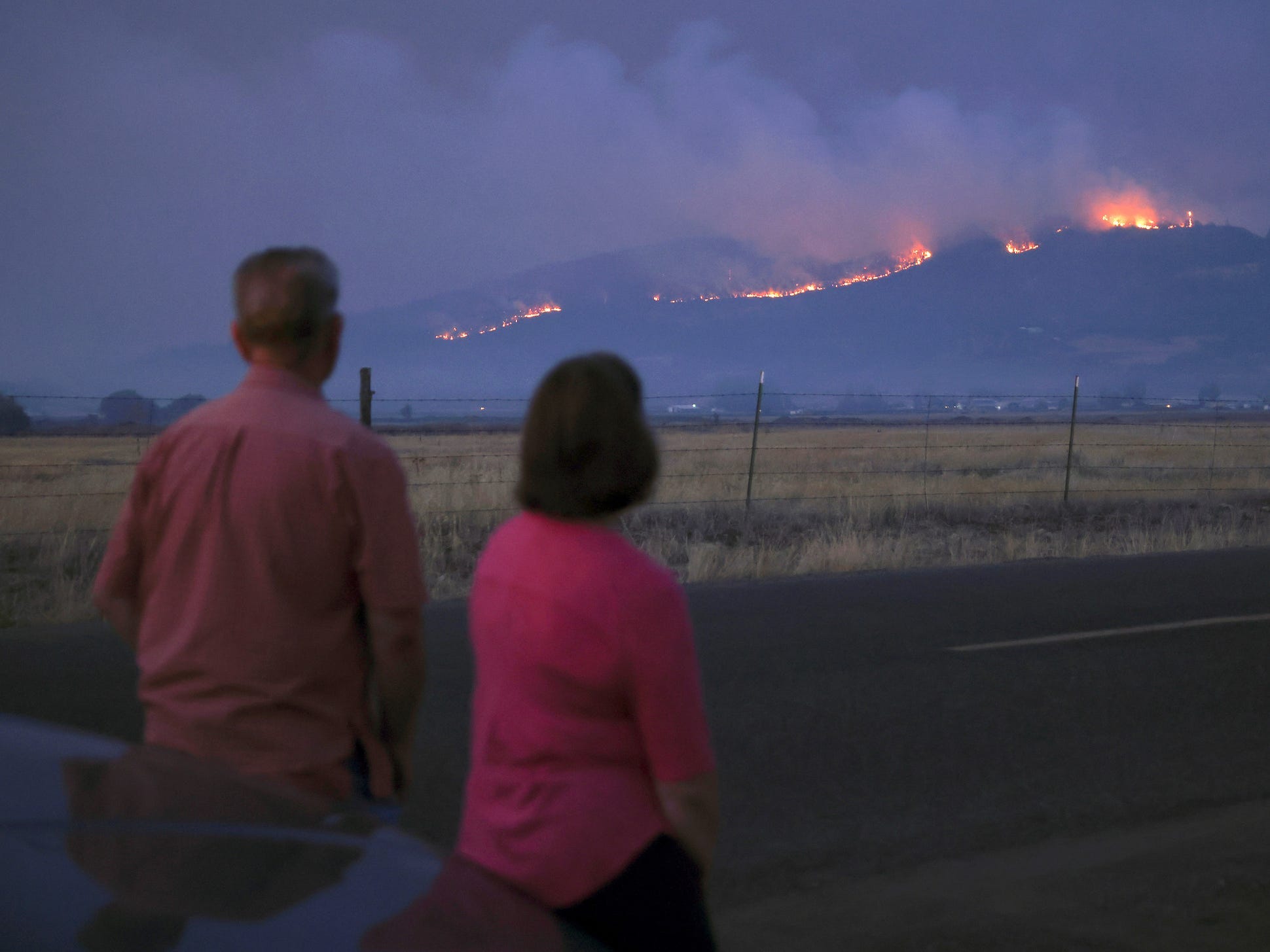 Carlos Barria/ReutersLocal residents look at smoke and fire over a hill during wildfires near the town of Medford, Oregon, September 9, 2020.

Unprecedented wildfires have been raging along the West Coast for more than a week.

Tens of thousands of people have fled their homes in Washington, Oregon, and California, and even those who don’t live near a fire have been trapped inside for days due to hazardous air from the smoke blanketing the coast.

Pollution levels skyrocketed across all three states last week, making the air outside unsafe to breath and rivaling the most polluted cities in the world. Forecasts don’t expect the air to clear significantly until later this week.

A growing body of research shows smoke can damage the lungs, blood vessels, and immune system, leaving people more vulnerable to respiratory illness. So when flu season arrives, the lingering effects of the poor air could exacerbate twin outbreaks of flu and COVID-19.

“That’s something that we need to watch carefully,” Perry Hystad, an environmental epidemiologist and associate professor at Oregon State University, told Business Insider. “Because there is this evidence in terms of air pollution suppressing the immune system and making individuals more susceptible to the flu and, of course, potentially coronavirus.”

Wildfire smoke is terrible for your lungs 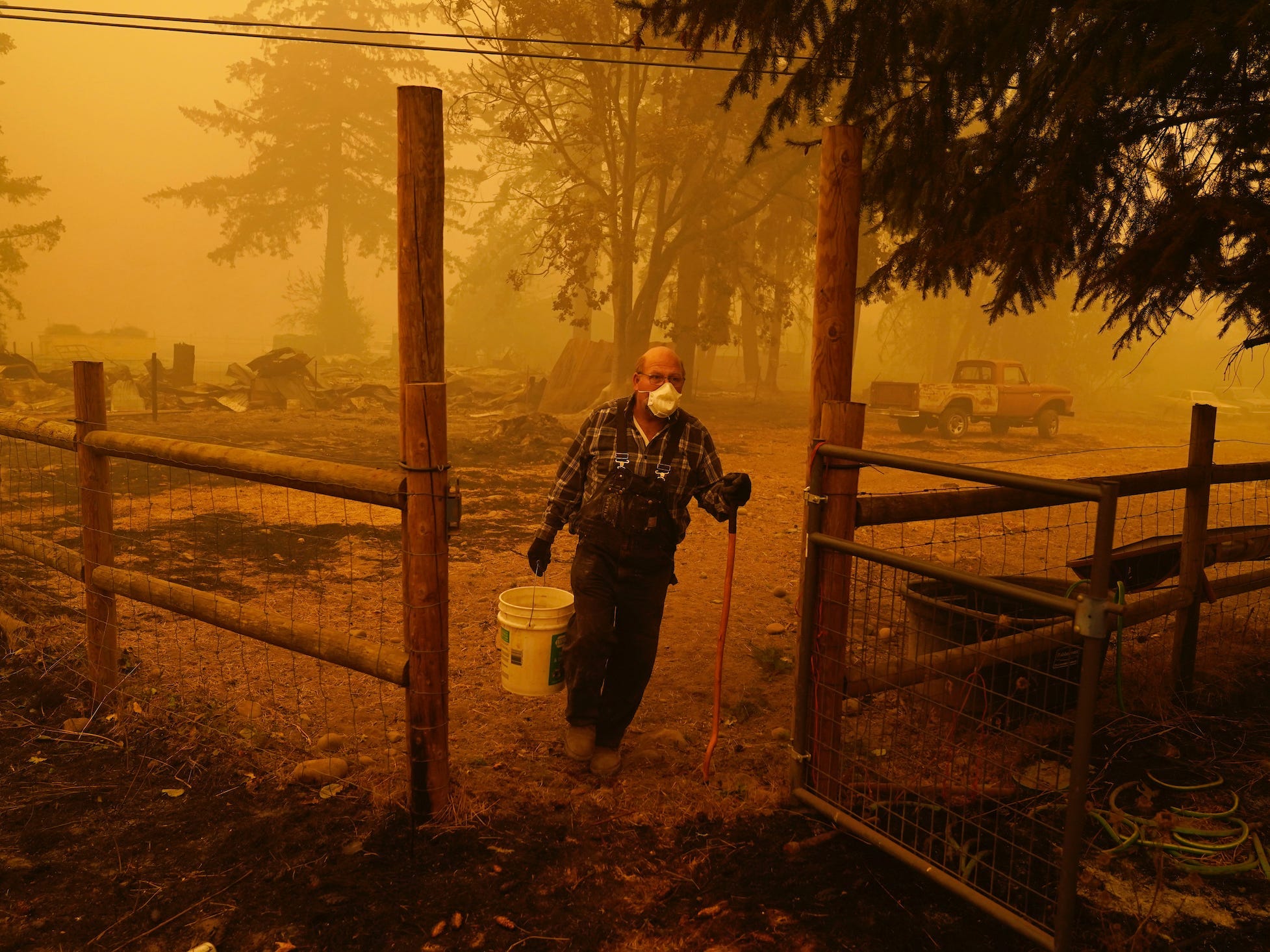 John Locher/AP PhotoGeorge Coble carries a bucket of water to put out a tree still smouldering on his property destroyed by a wildfire, September 12, 2020, in Mill City, Oregon.

The most hazardous thing about wildfire smoke is the tiny particulate matter it carries â€” specifically, particles that measure no more than 2.5 micrometres across (that’s about 30 times smaller than a human hair). These are known as PM2.5.

When humans inhale smoke, these particles can penetrate deep into the lungs and even the bloodstream. Research has connected PM2.5 pollution to an increased risk of heart attack, stroke, and premature death. In healthy people short-term, it can irritate the eyes and lungs and cause wheezing, coughs, or difficulty breathing.

“There’s a lot of research on what wildfires can do, or what air pollution does, to the lungs,” Stephanie Christenson, a pulmonary and critical care physician at the University of California, San Francisco, told Business Insider.

That research shows PM2.5 particles can damage the lining of the lungs and cause inflammation. The Centres for Disease Control and Prevention warns that it can “make you more prone to lung infections,” since any breach in the lungs’ lining offers more opportunities for a virus to infiltrate.

Smoke can also impact the heart and blood vessels: Many studies have linked wildfires to increases in heart attack, stroke, and heart failure. That’s probably because when PM2.5 particles get into the blood, they can cause inflammation and clotting. Blood pressure can also rise just from the stress of living in an apocalyptic, sepia-toned haze (not to mention the difficulty of evacuating your home). 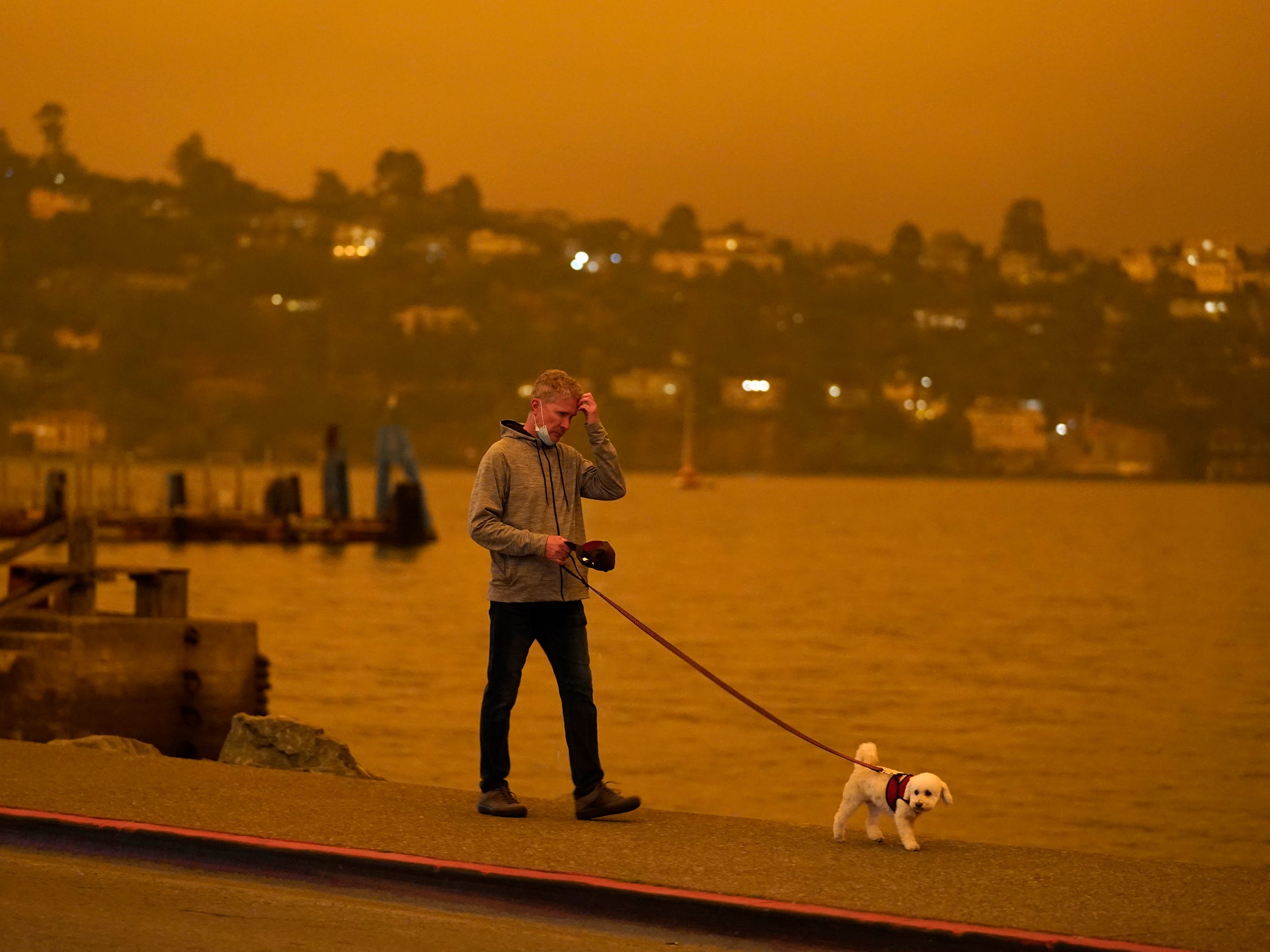 Eric Risberg/APA man walks his dog along Bridgeway Avenue as smoke from wildfires darken the morning in Sausalito, California, on September 9, 2020.

One study looked at more than 670,000 ambulance dispatch calls during five wildfire seasons in British Columbia, Canada, and found an increase in respiratory and cardiovascular issues within just one hour of a rise in PM2.5 pollution.

“Around the time of wildfires, we actually get more patients going into the hospitals with severe respiratory complaints like pneumonias,” Christenson said. “There’s actually a higher mortality rate after wildfires that we think [is] due to health conditions, not just people perishing in wildfires.”

PM2.5 particles can also impair the immune system, possibly by disabling immune cells in the lungs or by simply being overwhelming.

“These particles can cross into the bloodstream and sort of reach everywhere in the body,” Hystad said. “So your immune system is definitely under pressure.”

It’s still unclear how PM2.5 exposure will influence coronavirus infections, but odds are it won’t be good. 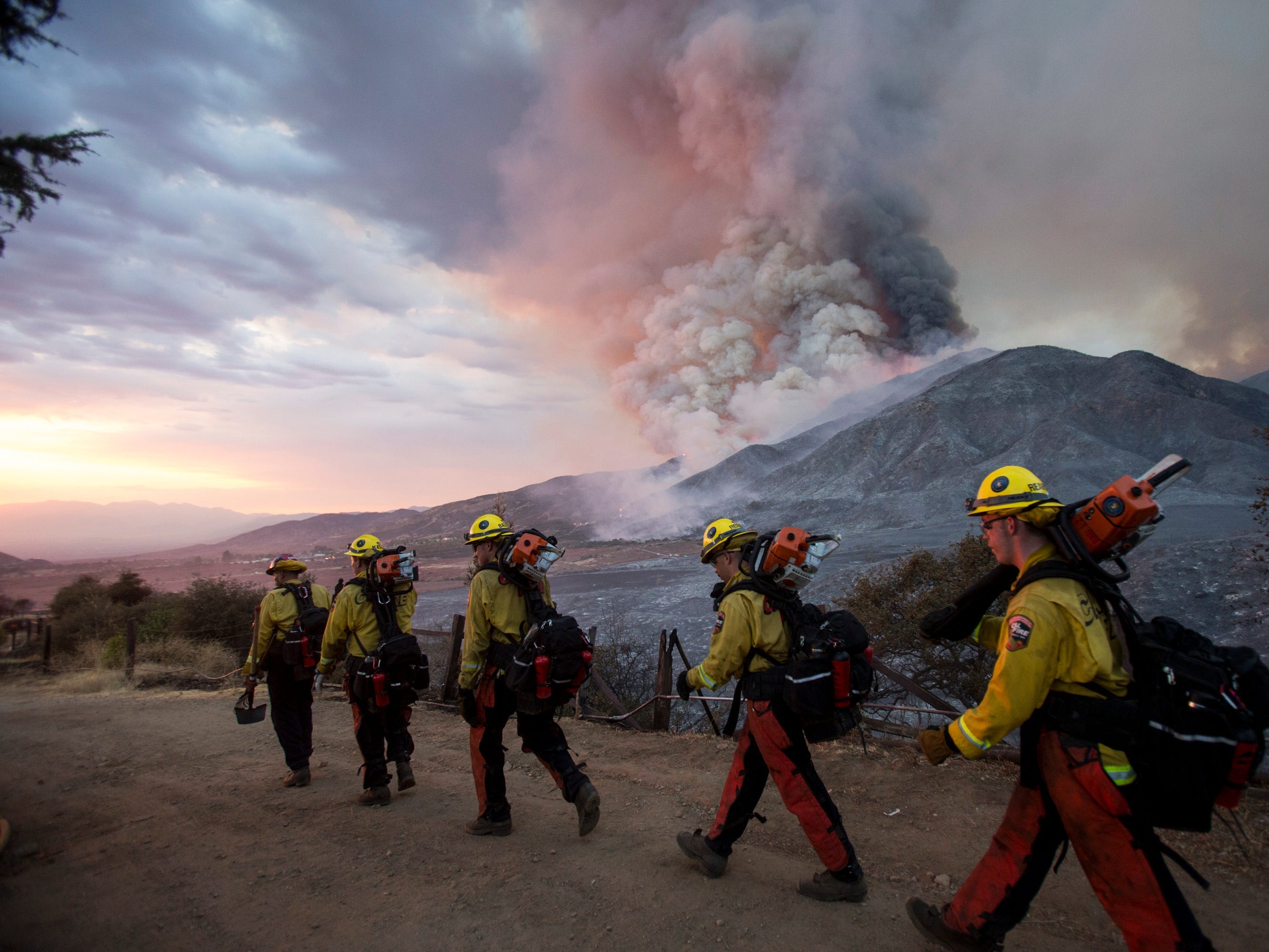 Ringo H.W. Chiu/APFirefighters walk in line during a wildfire in Yucaipa, California, September 5, 2020.

Researchers at the Harvard TH Chan School of Public Health found that people with COVID-19 were more likely to die if they lived in a county with high levels of PM2.5 air pollution. A few other studies have shown a similar connection.

“We’re still kind of in our infancy of what wildfires in connection with COVID-19 do to the lungs, because we just don’t have the data yet,” Christenson said, adding, “I’m worried that if you are exposed to the wildfires and you have COVID-19, you could have more symptoms or worse disease.” 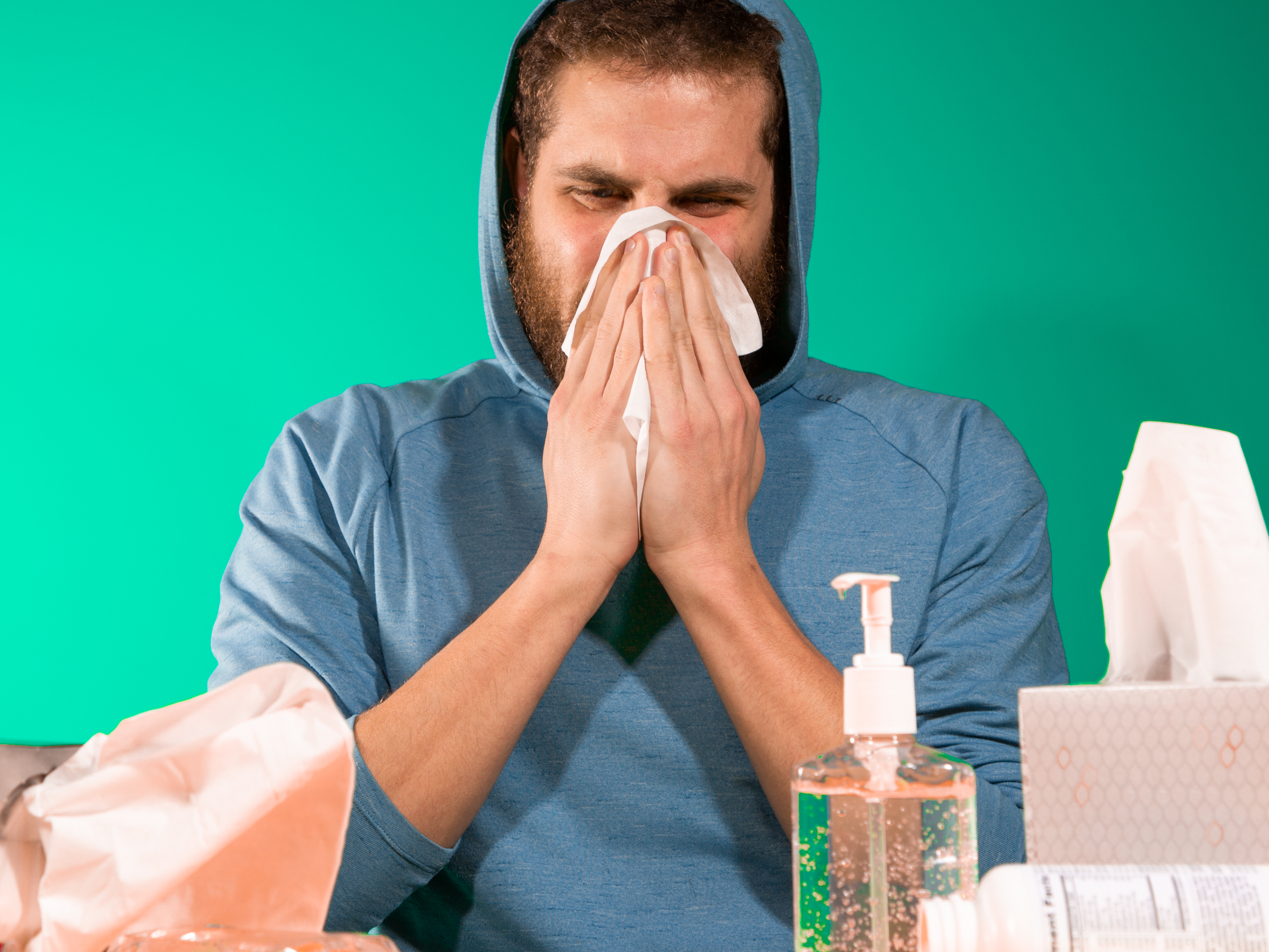 A recent analysis of nine years of data from Montana revealed that months after prolonged wildfire smoke, communities had three to five times more flu cases than normal.

“In other words, our study showed cases of flu go up after bad fire seasons,” Erin Landguth, an associate professor at the University of Montana who conducted the study, told Colorado Public Radio.

Two studies from China have also found associations between PM2.5 exposure and increased flu-like illness, though that research was not about wildfire smoke in particular.

To make matters worse, wildfires have been persisting later into the year over the last few decades as a warming climate lengthens the dry season. That raises the possibility that smoky conditions will overlap with flu season â€” fire season typically peaks in late September or early October, which is when flu season usually begins. 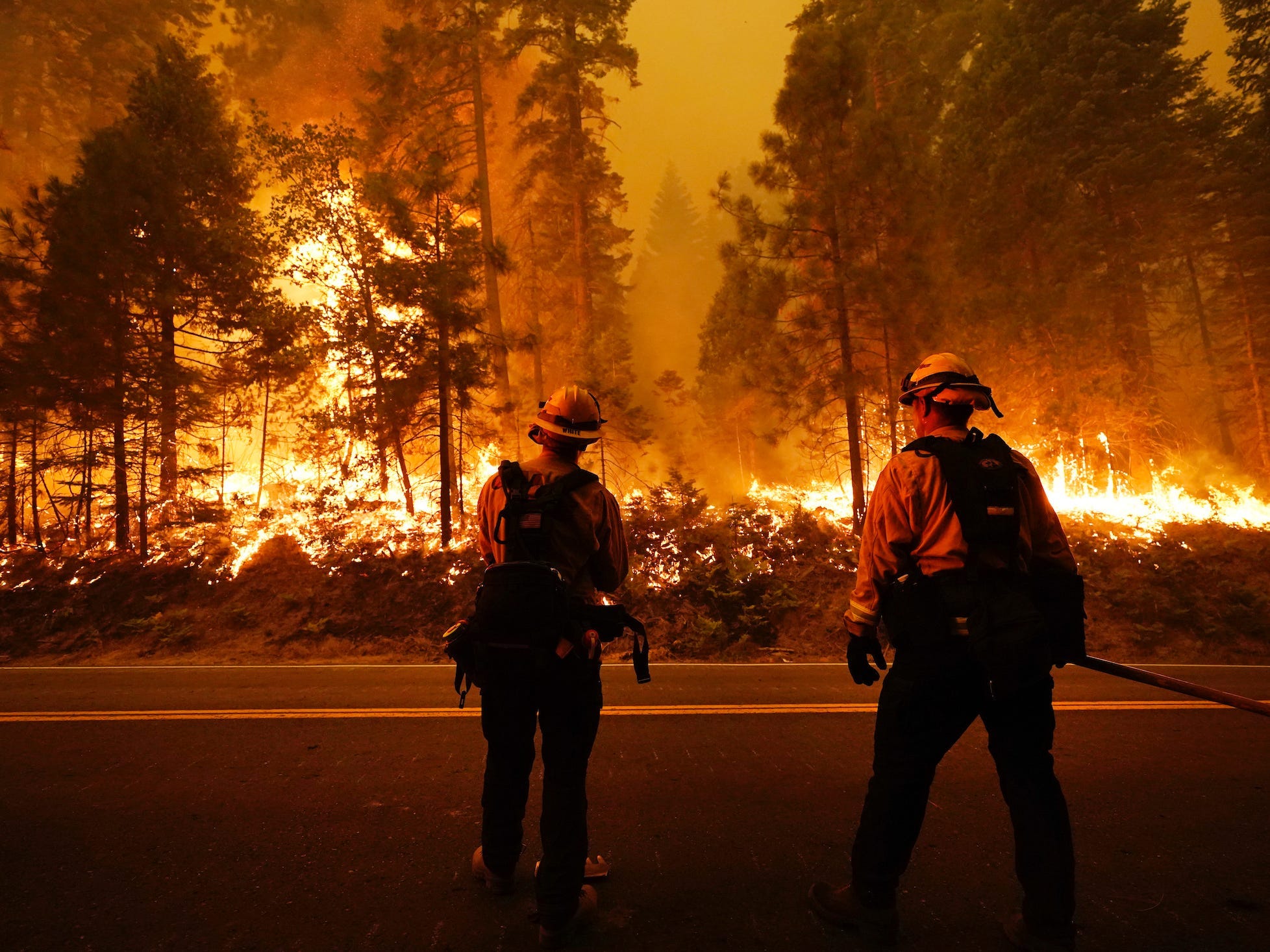 That could lead hospitals in the Pacific Northwest to see an influx of patients with flu, coronavirus, and conditions exacerbated by wildfire smoke all at the same time. Hystad does not think the smoke will tip the scales enough to overwhelm hospitals, but it might compound the effects of the flu-coronavirus overlap that many experts already fear.

“We’ve been kind of bracing for this, as lung doctors, for a while,” Christenson said. Though the health effects of wildfire smoke develop slowly for many people, she added, “you just worry with the COVID-19 patients.”