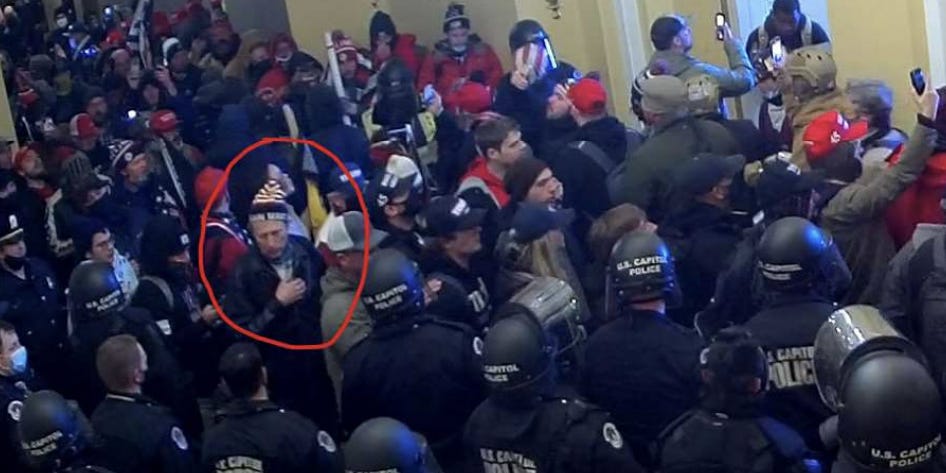 The Justice DepartmentGary Edwards inside the Capitol on January 6.

A Pennsylvania man was arrested and charged Tuesday over his participation in the January 6 Capitol attack after investigators used screenshots of his wife’s Facebook posts, which detailed the man’s alleged actions inside the government building, as evidence.

Prosecutors say Gary Edwards, 68, was captured on security footage and rioters’ live streams during the insurrection walking around the inside and outside of the Capitol building.

But authorities had some inadvertent help to kick off their investigation.

“Okay ladies let me tell you what happened as my husband was there inside the Capitol Rotunda,” Feiler Edwards said in a Facebook post, according to an FBI affidavit.

In his wife’s account, Edwards allegedly followed a “small group of young men dressed in military garb” into the Capitol after they broke a window and climbed in. As the crowd stormed the building, Feiler Edwards said police were “milling around doing nothing even after the breech.”

Once inside, she said her husband took on a helping role, assisting those who had been hit with “teargas blasts.” Once again, she said, the police were standing “right next to him as Gary poured water into their eyes.” According to the Facebook post, Edwards then “stayed to chat” with the police who were “calm.”

To end her tale, Feiler Edwards noted that “prior to Gary getting in evidently one woman was shot.” A capitol police officer fatally shot Trump supporter Ashli Babbitt as she tried to climb through a shattered window into the Speaker’s Lobby during the riot.

In a second post, Feiler Edwards claimed her husband carried US flags throughout the Capitol, sang the Star Spangled Banner twice, chanted with fellow insurrectionists, and then departed when asked to leave.

“These were people who watched their rights being taken away, their votes stolen from them, their state officials violating the constitutions of their country and people who are not being given the opportunity to be able to have evidence shown,” Feiler Edwards reportedly wrote.

But while Felier Edwards was lamenting her husband’s lack of opportunity to “have evidence shown,” somebody viewing her Facebook was screenshotting her posts as evidence that would eventually help lead to his arrest.

Prosecutors say an anonymous tipster took screenshots of the Facebook posts and forwarded them to investigators in February. The Justice Department later found social media photos and video footage that placed Edwards at the Capitol during the attack, court documents said. 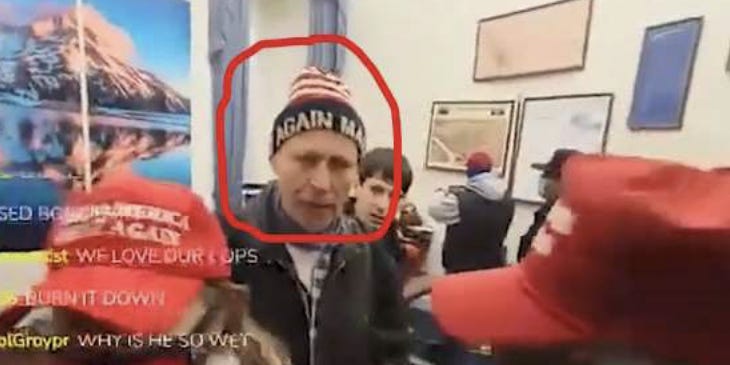 The Justice DepartmentGary Edwards captured on a livestream inside the Capitol on January 6.

According to the affidavit, Feiler Edwards’ Facebook posts were deleted or removed from public view some time after January 6.

Feiler Edwards did not respond to Insider’s request for comment.

Authorities arrested Edwards on Tuesday and charged him with five counts, including violent entry and disorderly conduct on Capitol Grounds, disruption of official business, and parading, demonstrating, or picketing in a Capitol Building.

More than 450 people have been charged in the Capitol insurrection so far.