What it's like to be a Hotdogger, Oscar Mayer's cast of college grads driving the Wienermobile across the US 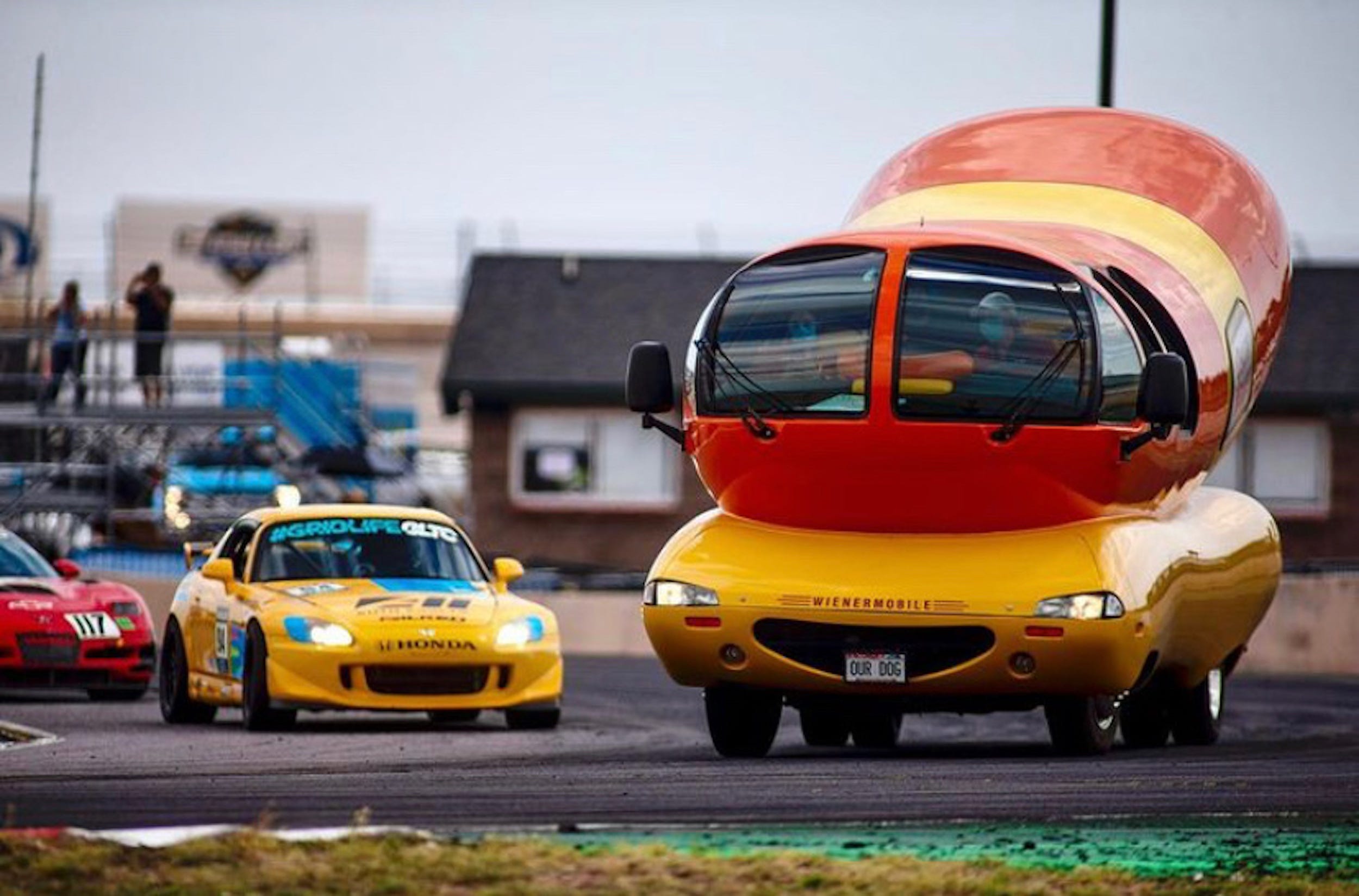 “Kristen, we would ‘relish’ the chance to speak with you tomorrow! Franks a BUNch for working with us,” Zach Chatham responded when I asked if I could interview him. He signed off with his professional name: “With relish, Zach n Cheese.”

Even through email, Chatham’s enthusiasm is palpable, as is his commitment to the bit. 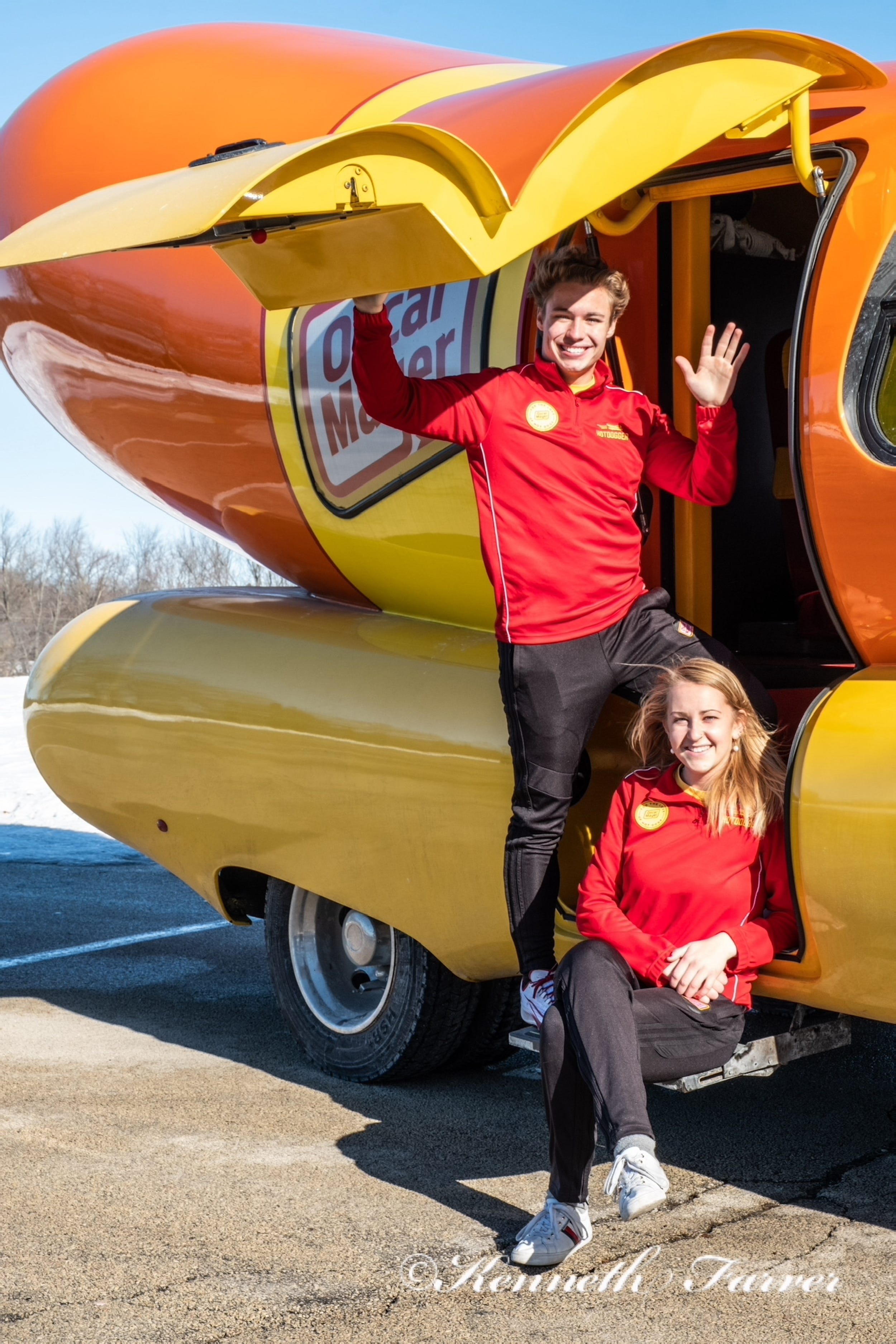 It’s easy to see why: Chatham, along with his codriver “Ketchup Katie” Ferguson, are Hotdoggers for Oscar Mayer, a position the company’s currently hiring for. While the job might not sound familiar right off the bun, you’ll recognise their ride: the garish, orange-and-yellow Wienermobile that’s shaped like a massive hot dog.

At 27 feet long, 11 feet tall, and eight feet wide, the Wienermobile is a bus-sized celebrity in which Chatham and Ferguson travel the nation, building the Oscar Mayer brand and making peoples’ days. It doesn’t fit under any clearance below its 11-foot height, nor can it squeeze through a drive-thru.

“However, we do fit in gas stations,” Chatham told Insider during a call, “and we fill up with high octane-mustard!” 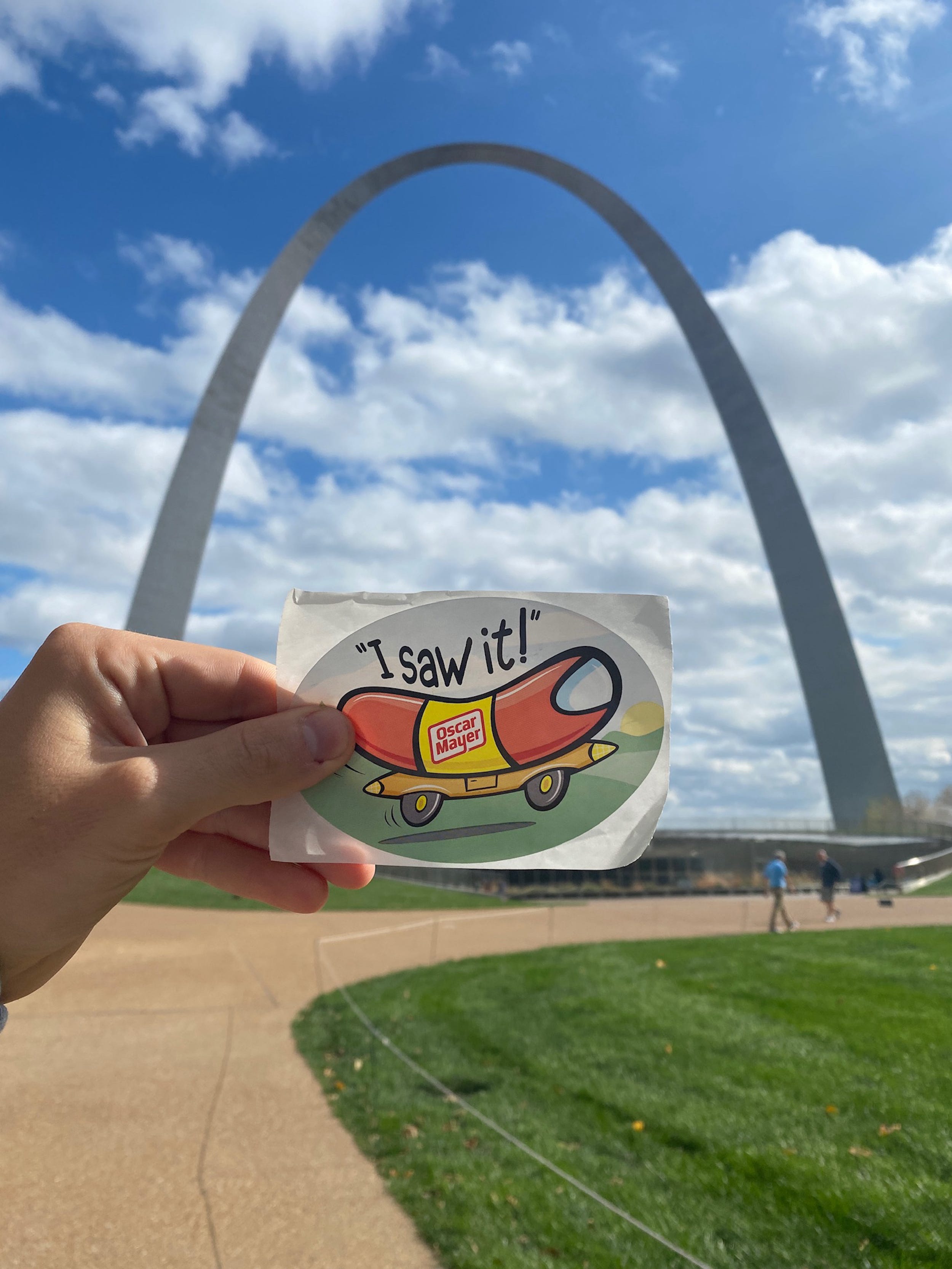 Zach Chatham and Katie Ferguson/Oscar MayerThe two travel all around.

The Wienermobile has gull-wing style doors (“Lamboweenie,” Chatham supplied helpfully), ketchup-and-mustard-coloured seats, and a bunbox instead of a glovebox. Passengers can ride shotbun and are asked to fasten their meatbelts.

Keeping with the times, there’s even a backup camera, although the two are trained to guide and help each other when backing into places.

The adventure of a lifetime

If you couldn’t guess already, Chatham and Ferguson don’t exactly have a typical day on the job.

“You have to be incredibly flexible to work this job,” Ferguson said. “We go to a city for a week to two weeks, do birthday party drive-bys, farmer’s market visits, and go to museums. We’ve driven on racetracks. And we do events and media interviews. The only consistency is how much joy it brings people.” 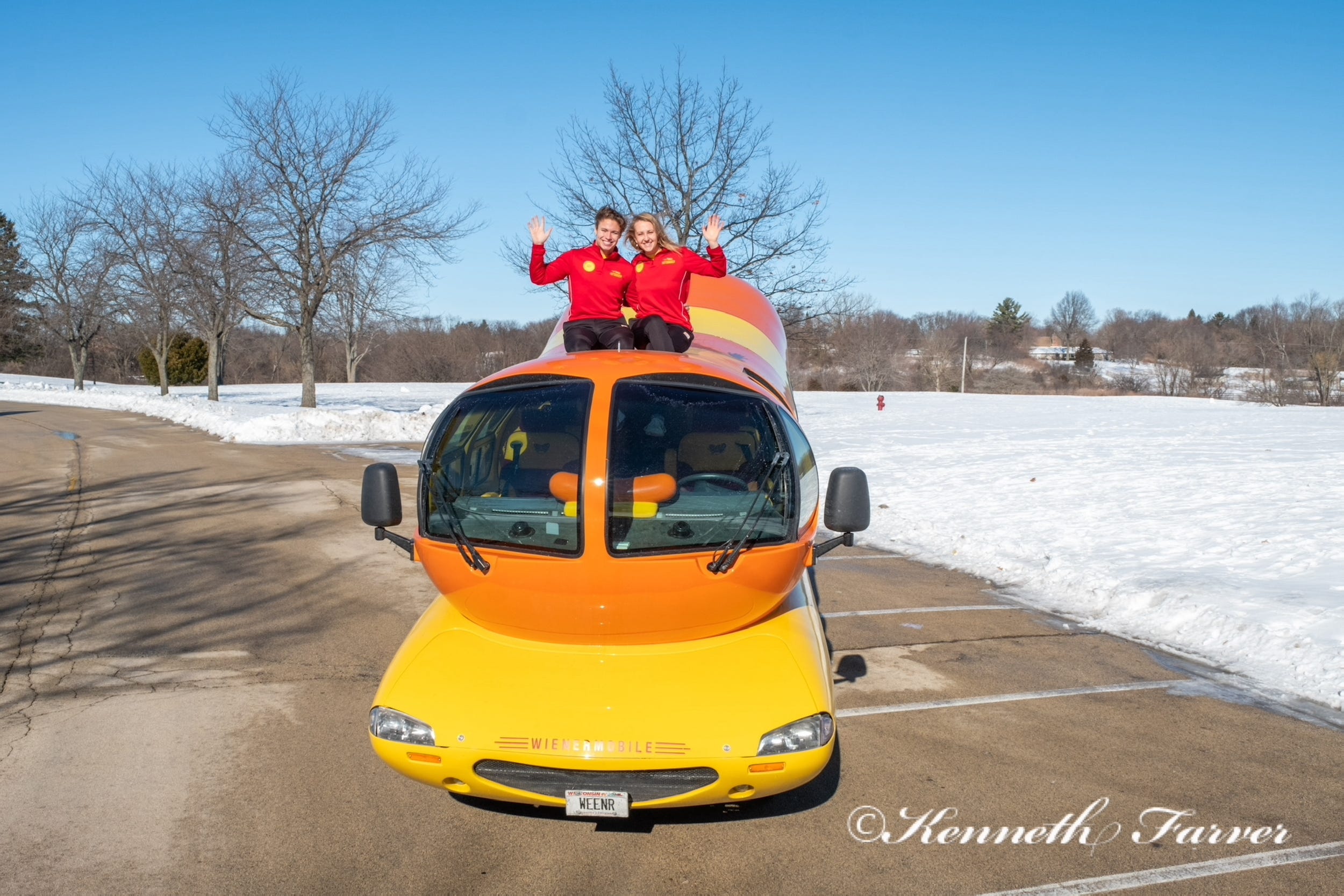 It’s hard to say whether the Wienermobile or Chatham and Ferguson have gained a bigger following. “We collect a fan club of people who follow us at our events,” Ferguson explained. Sort of like people following a band on tour.

“Zach had a fan club of high school boys in Minnesota,” Ferguson went on. “I met a couple who ended up following us all over the Midwest. They call me, too, and like to come out to see us in cities.” 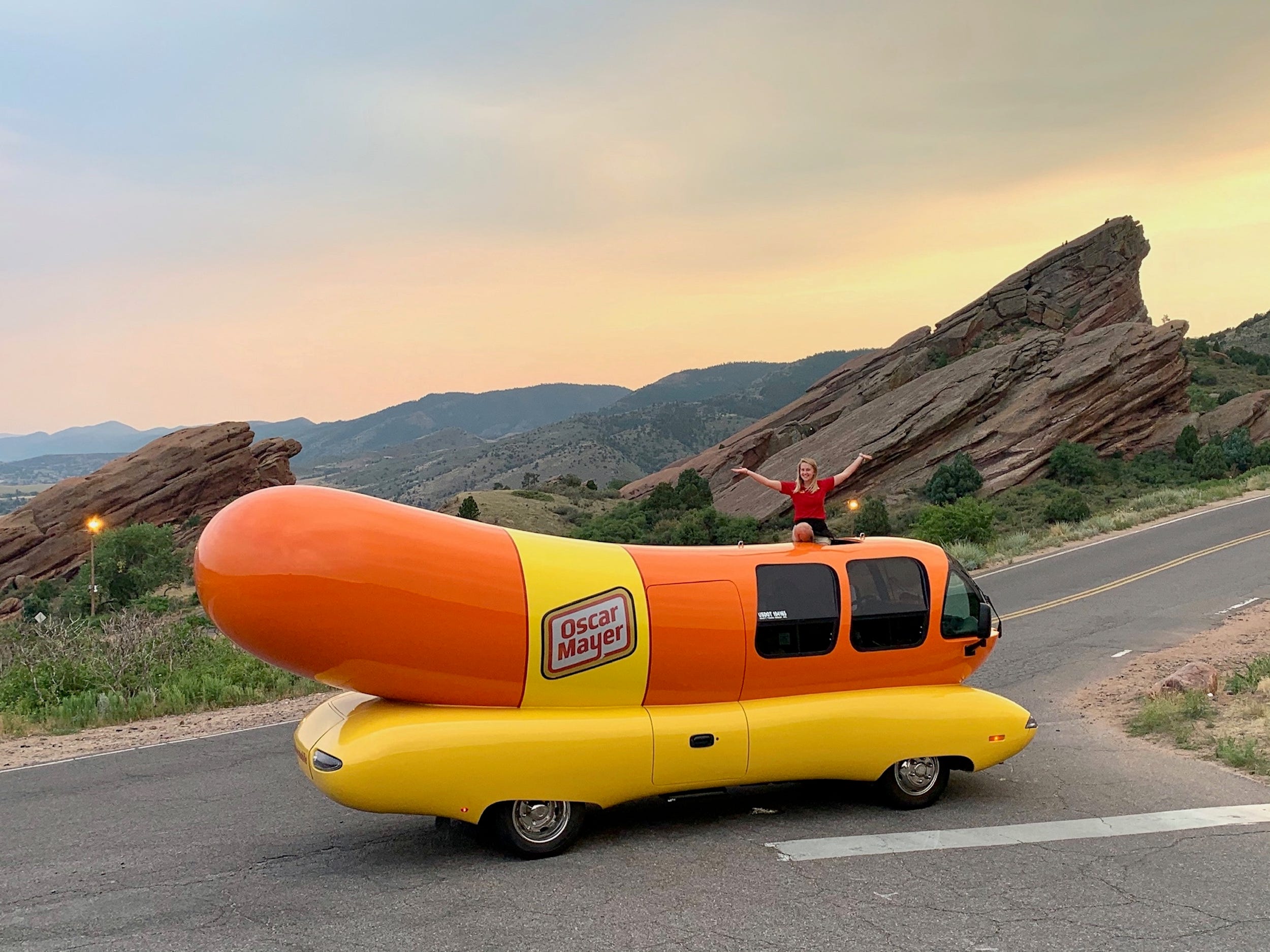 Zach Chatham and Katie Ferguson/Oscar MayerKeep an eye out for them if you’re driving around.

And the mustard-asked question of all? People wonder if Chatham and Ferguson sleep in the Wienermobile in between stops.

The two started driving the Wienermobile in July 2020 and they will wrap up their tour this coming June. Like everyone else, the COVID-19 pandemic put them in a pickle. 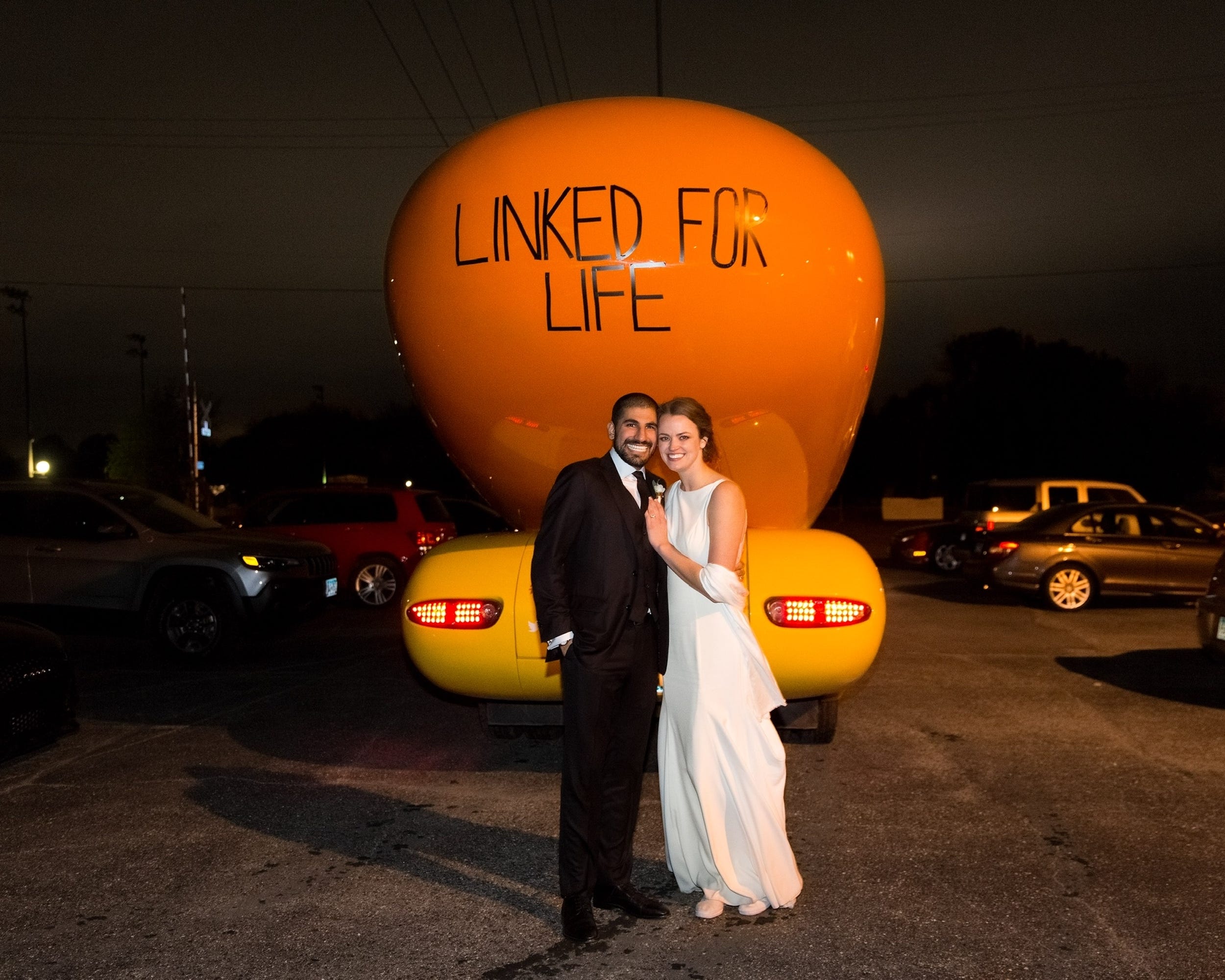 Oscar Mayer pulled the Wienermobiles off the road for the first few months of the pandemic. They returned to the roads this past August. Chatham said that they have been following all CDC guidelines all along the way.

“The Wienermobile started as an Oscar Mayer initiative in 1936 during the Great Depression to bring joy to people,” he said, tracing the parallels. “We’ve been able to change people’s days right now during COVID. They see us on the road, they honk and get excited.” 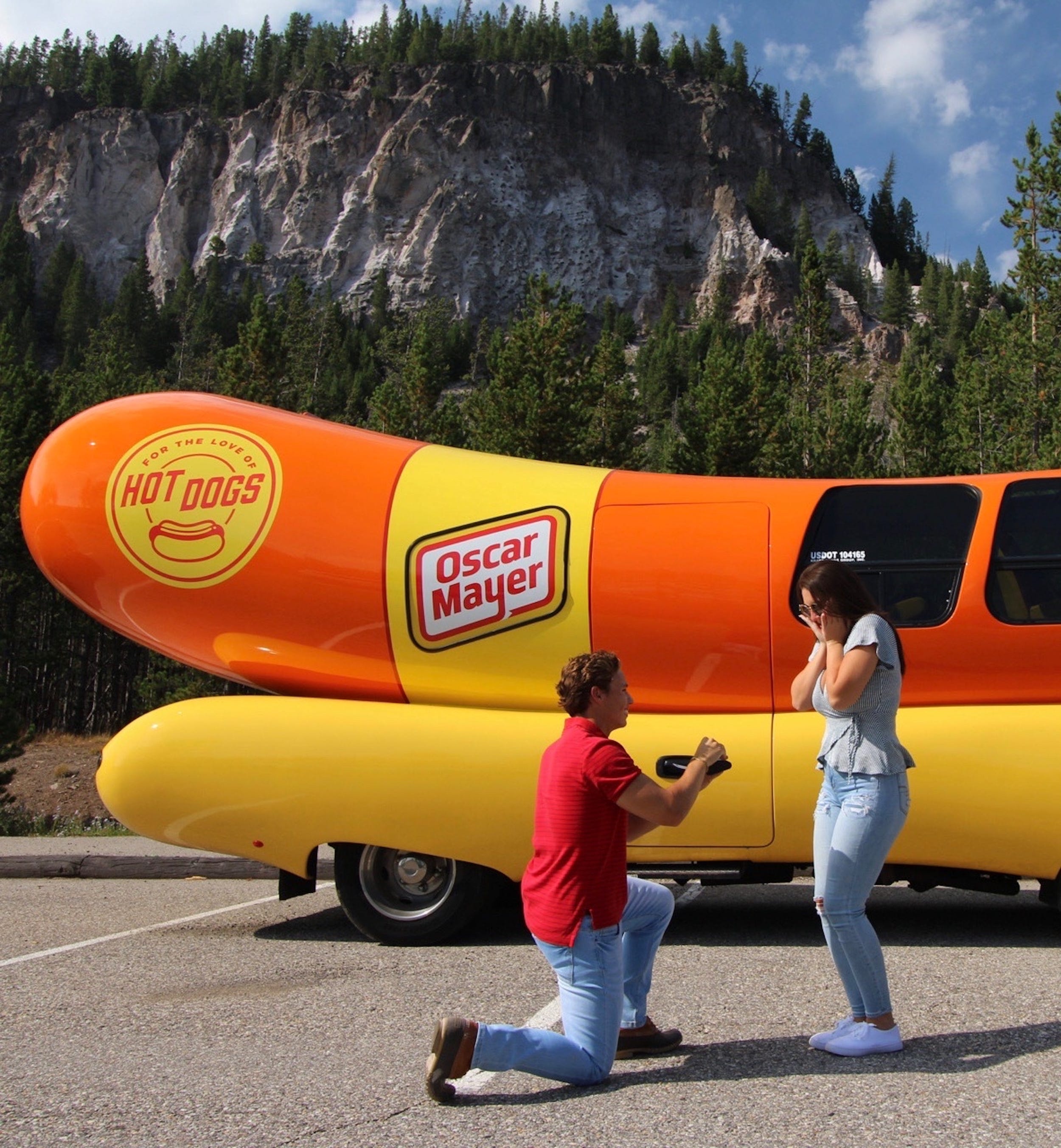 Zach Chatham and Katie Ferguson/Oscar MayerChatham proposing in front of the Wienermobile.

Last September, Chatham got engaged in front of the Wienermobile in Yellowstone National Park. Ferguson relayed a story where she once got to drive the Wienermobile as a pace car at a racetrack for three laps in Colorado. (Anyone interested in Chatham and Ferguson’s adventures is welcome to follow them on Instagram here and here.)

It seems like a sweet and wholesome deal, being paid to be able to drive all over the country and meet countless people along the way, especially if you’re fresh college grads like Chatham and Ferguson. Chatham’s own great-grandfather drove the Wienermobile in the 1970s and Ferguson’s grandmother had a similar job with a hot dog company. 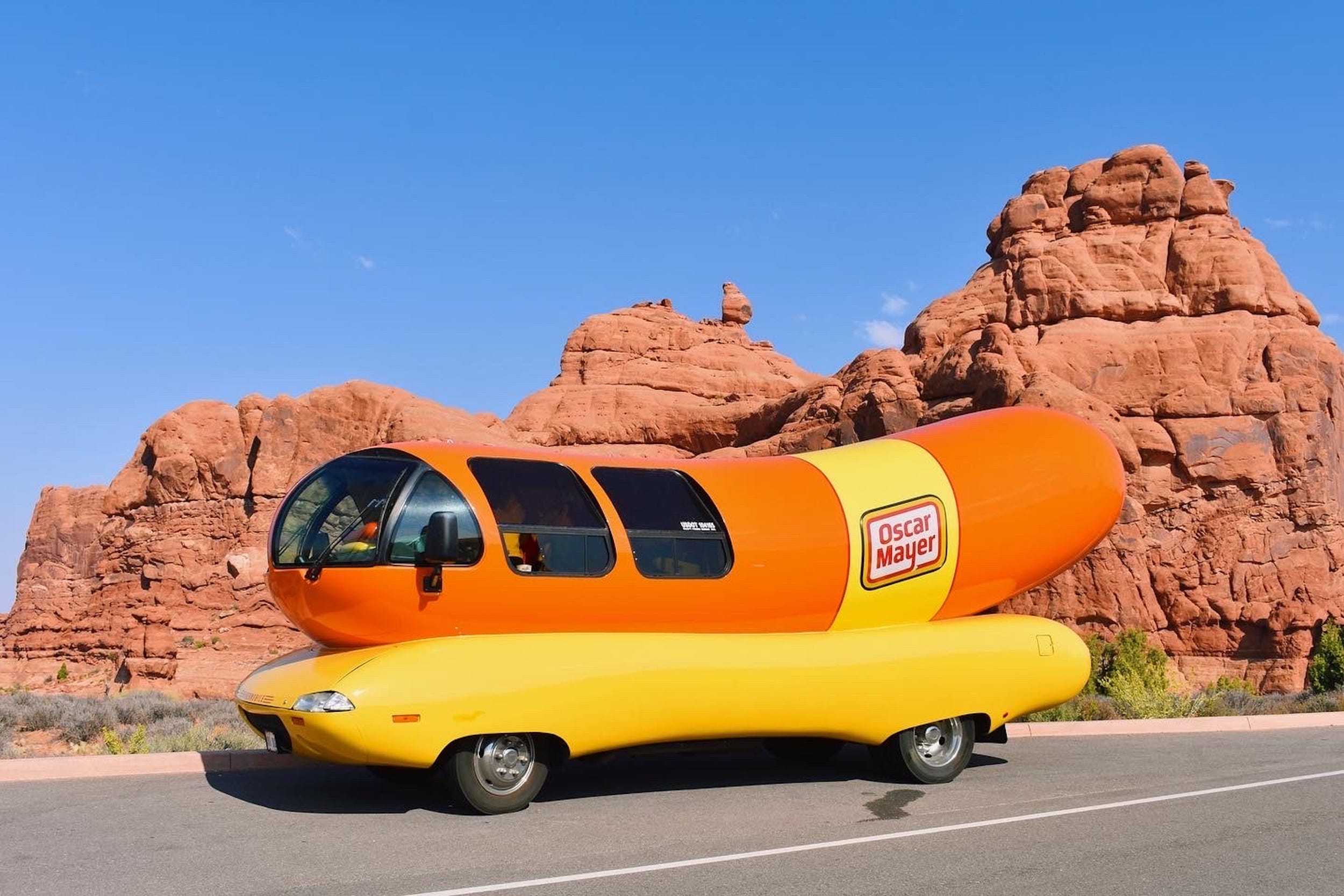 Zach Chatham and Katie Ferguson/Oscar MayerThe Wienermobile even has a backup camera.

Once you’ve driven the US and you have pockets of friends and memories in all parts of it, it doesn’t feel quite as vast.

“It seemed like an adventure of a lifetime,” Ferguson said.

They’re hiring, by the way

At any point, there are six Wienermobiles driving around the US, according to Oscar Mayer. The Wienermobile from 1969 had a Chevrolet motorhome frame and Ford Thunderbird taillights. In 2017, the company expanded the fleet to include the Wienermini, Wiener Rover, Wienercycle, and Wienerdrone. 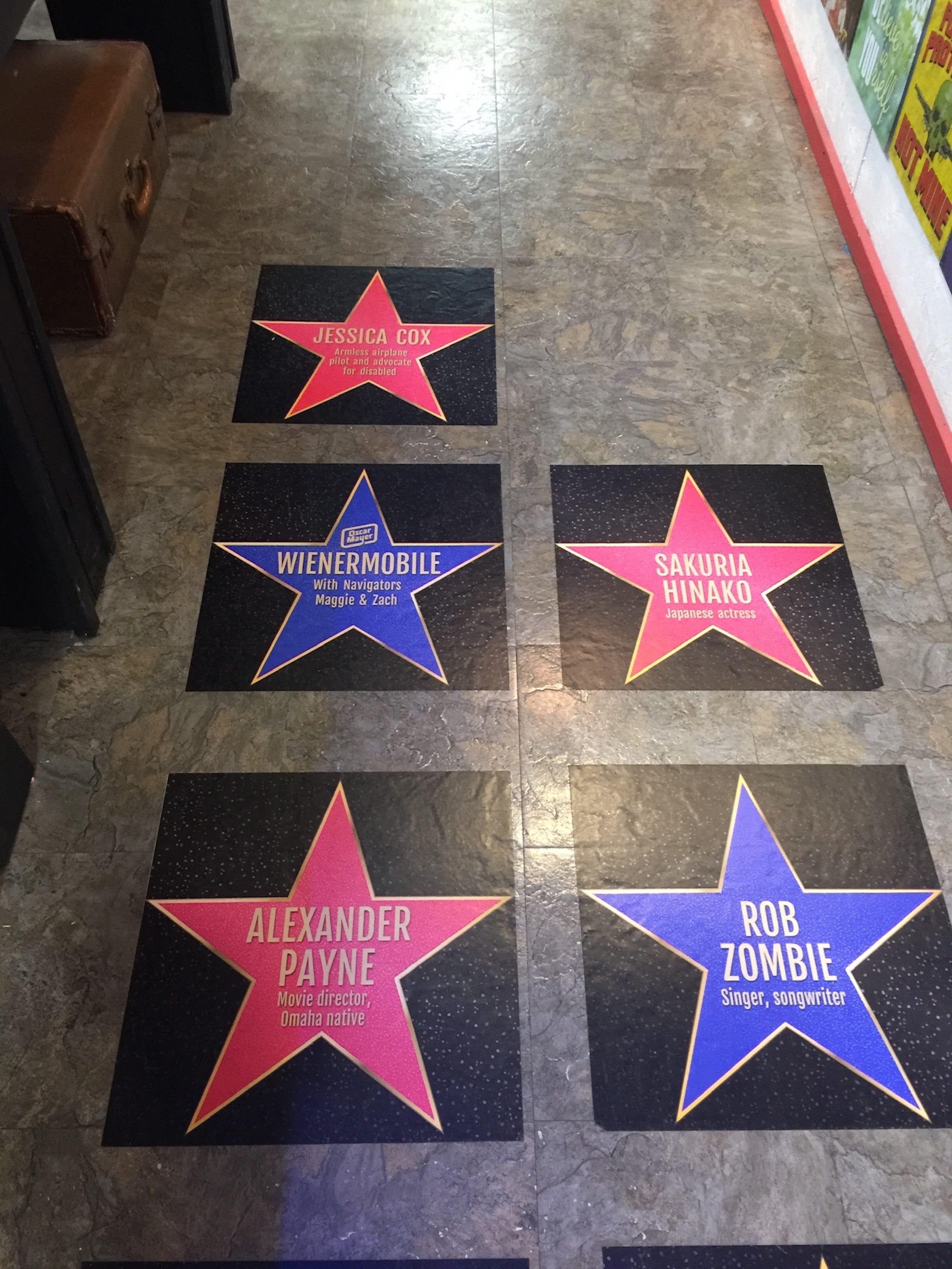 Zach Chatham and Katie Ferguson/Oscar MayerChatham’s name is on the Walk of Fame.

If any of that appeals to you, here’s some good news: You have a chance to become a Hotdogger yourself. Anyone who’s interested is welcome to apply until the application closes on January 31.You can view the job listing here.

Surprisingly, you don’t need a commercial driver’s licence to drive the Wienermobile.

“We do a lot of training at Hot Dog High in Madison, Wisconsin,” Ferguson said. “The three requirements are a college education, a driver’s licence, and an appetite for adventure.” 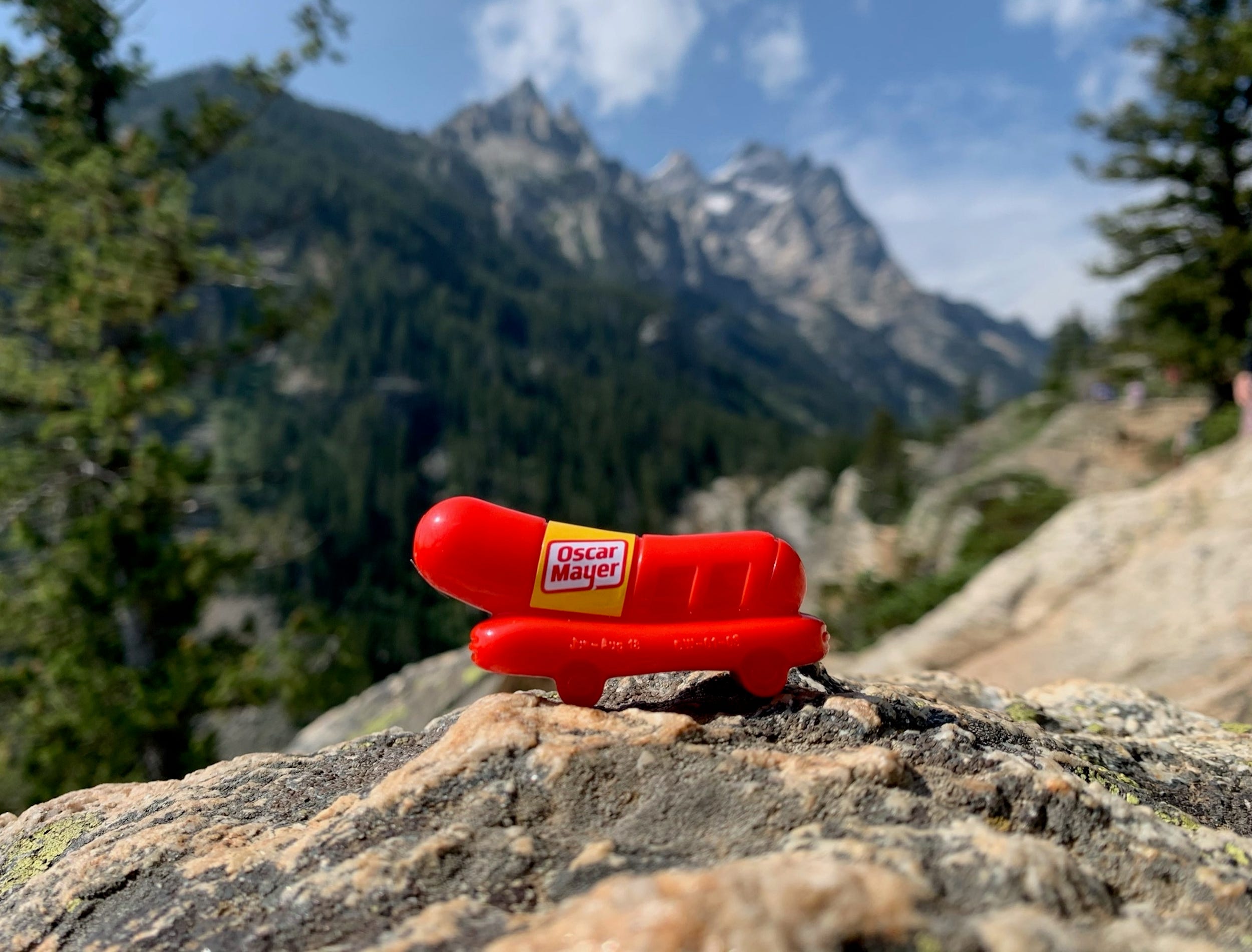 “You need to be trustworthy because the vehicle is valuable,” Chatham added. “You have to be creative to come up with content and marketing ideas and be personable to represent the brand well. There’s discipline involved.”

As for the plethora of puns? Surely there’s a handbook of them hidden away somewhere at Hot Dog High.

“You gotta have that Hotdogger sparkle,” Ferguson said. “Buns of buns of puns.”