A 'Love Is Blind' contestant fed her dog red wine because she 'loves' it, but it's actually a really bad idea — here's why 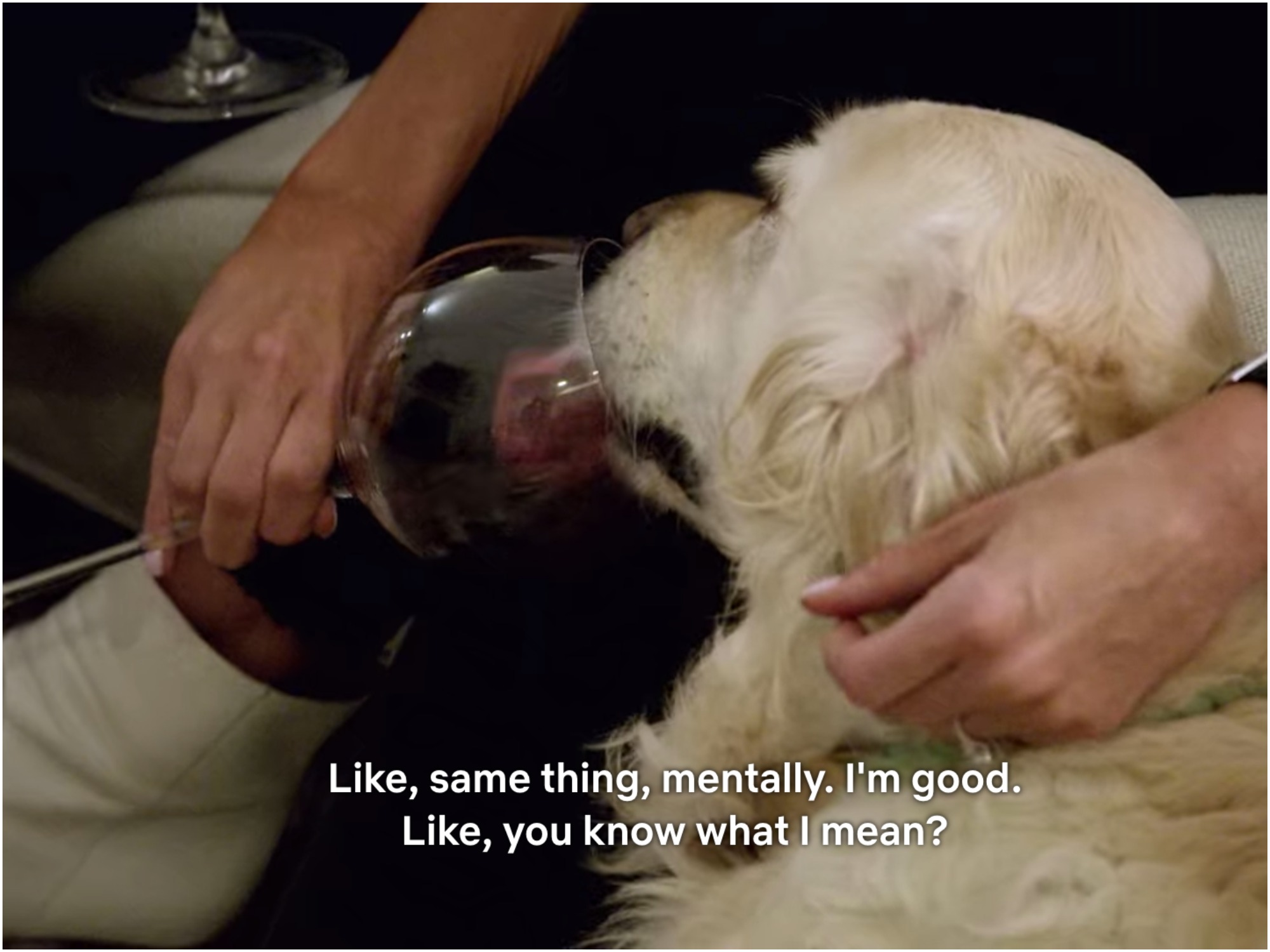 After hours of interrogating her new fiancé she met two weeks ago about their 10-year age gap and gender roles, Jessica, on the Netflix show “Love Is Blind,” fed her Golden Retriever red wine straight out of her glass.

“She loves wine,” she said to Mark – the man she’d said “yes” to, despite having the hots for someone else.

Now we don’t have time to unpack all of that. But we can start with how you should never, ever feed a dog alcohol.

“Whilst we love our pets, and often want to share experiences with them, pets of all varieties should never be exposed to alcohol,” Jessica May, the lead vet at video vet service FirstVet, told Insider.

“If your dog does ingest alcohol, the biggest concern should be the alcohol percentage of the drink they have consumed. As wine has a relatively high alcohol content, it is potentially more dangerous for dogs than other drinks like beer or cider.”

‘Feeding a dog alcohol is actually quite cruel and dangerous’

Alcohol can cause confusion and vomiting in dogs, “as well as other symptoms typically experienced by humans that overindulge,” May said.

“Your dog may appear dazed or lethargic after drinking alcohol, and may also begin panting excessively or develop a high temperature. In extreme cases of alcohol poisoning, dogs may suffer from muscle tremors, seizures or loss of consciousness.”

Dogs should be taken to a vet immediately if they show any of these symptoms, she added.

Jessica is hardly the first to indulge their dog in booze. A lengthy blog post on Puptrait Studio, a dog photography group, says some dogowners find it funny, but warns against it.

“Feeding a dog alcohol is actually quite cruel and dangerous, and feeding a dog beer or booze is a form of animal abuse,” the article says. “Even small amounts of alcohol can trigger life threatening levels of toxicity, including a dangerous condition called metabolic acidosis.”

Metabolic acidosis, also known as alcohol poisoning, can cause damage to body cells, incontinence, slowed heart rate, and even heart attacks, according to PetMD.

This is the most dynamic moment of TV I’ve seen in a long time – from Netflix’s “Love is Blind.” A guy telling his fiancé, who he met the week before, that he’s mentally stable while she feeds her dog wine and tells him that she’s not his mom. So much to unwrap in ten seconds. pic.twitter.com/ePc58CppO7

‘You shouldn’t ever offer your pet alcohol’

Dogs don’t naturally enjoy alcohol, so it’s unlikely your pet will drink a lot if they find it accidentally, May said.

“That said, accidents happen and alcohol poisoning can be fatal, so it is best to keep glasses of wine out of your pet’s reach to prevent any mishaps,” she said.

“Make it a rule of thumb in your house that drinks should not be kept on the floor, where your thirsty dog could potentially get to them. If there is a spillage of alcohol, it should be cleaned up immediately, and you shouldn’t ever offer your pet alcohol.”

She added you should never offer them alcohol because this signals to them that it would be OK to drink such things, “if a glass were left unguarded on a table, for example.” 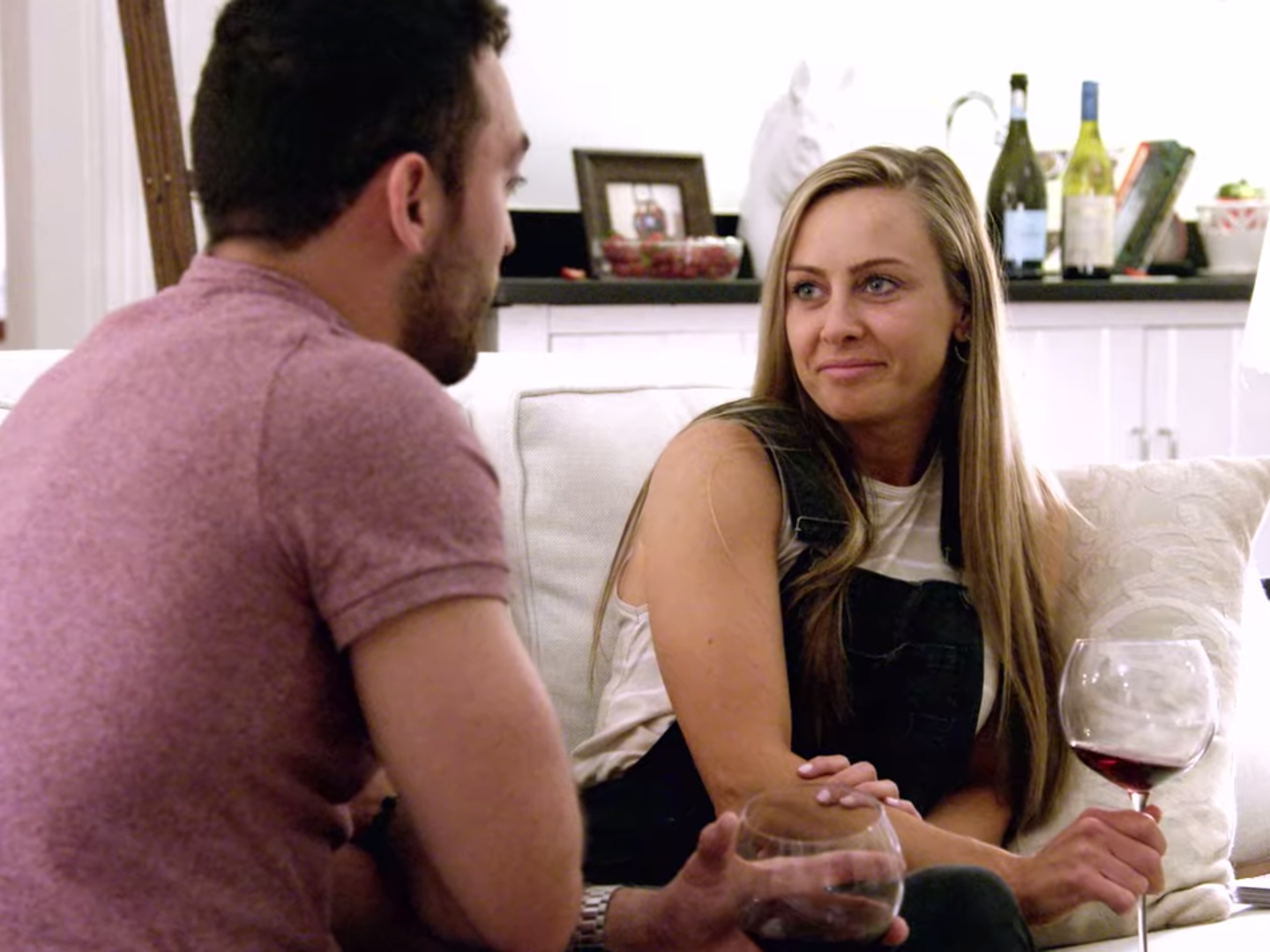 NetflixMark and Jessica on ‘Love Is Blind.’

When Jessica lowers her glass to her dog, then brings it back up to her own lips, Mark doesn’t bat an eyelid.

He is too preoccupied trying to convince the woman he’s known for a matter of days to marry him. They discuss their ages (he’s 24, she’s 34). He tells her how mentally stable he is, which Jessica considers a red flag.

In short, don’t give your dog wine. It’s not good for them.

We can’t speak on the success of marrying someone withing a few weeks of meeting them – the finale of “Love Is Blind” hasn’t aired yet. But maybe don’t do that either.

A couple on ‘Love is Blind’ say they’re in love in less than 5 days, but relationship experts are sceptical

10 reality dating shows that you can stream right now