Uber and Lyft are desperate for drivers. Here's what drivers say is keeping them off the road 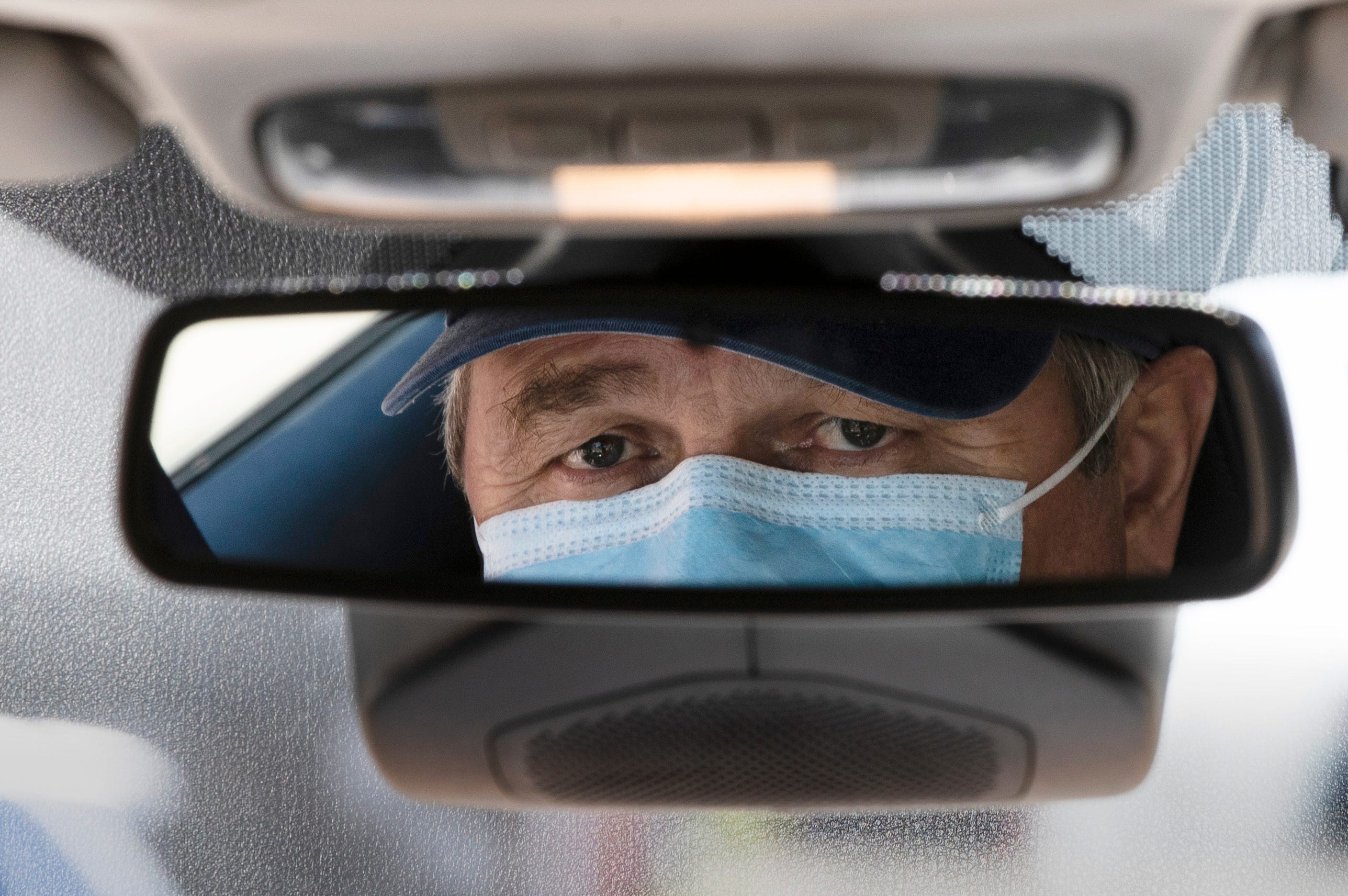 When the pandemic hit, Uber and Lyft drivers fled the platforms en masse.

More than a year later, rideshare demand is finally picking up for both platforms, but many drivers have been reluctant to return, and the companies are having to shell out millions of dollars to incentivize drivers to start working again.

Some drivers told Insider they’re simply waiting for more of the public to get vaccinated, or are fine with riding it out on stimulus checks or unemployment for now.

However, multiple drivers told Insider they’re still holding out for better offers, even as Uber acknowledges the pay will likely drop again if, and when, more drivers eventually come back, creating a paradox that could signal a driver shortage, and thus more expensive rides, for some time.

Still other drivers said they are bitter about the passage of Proposition 22, an Uber- and Lyft-authored law that California voters passed in November 2020. The legislation locked them out of a state-mandated minimum wage and healthcare benefits, and some of the drivers Insider interviewed said they considered that a last straw, and have no plans to return to either platform.

In separate statements to Insider, Uber and Lyft touted their respective offerings to rideshare drivers as passengers begin to return.

“According to our internal surveys of drivers, their top two concerns about returning to the platform are COVID safety and the level of earnings. That’s why our driver stimulus announcement included info on how high earnings are before any money is spent on incentives and reiterated our commitment to safety, including the rider mask mandate,” an Uber spokesperson said.

A spokesperson for Lyft said: “We’re seeing big increases in demand for rides, as vaccines roll out and people get ready to start moving again. That’s great news for drivers, who are busier and earning more than they were even before the pandemic.”

Insider’s conversations with 22 current and former Uber and Lyft drivers across the US revealed a variety of factors behind the current shortage, some of which will likely be short-term speed bumps, others which could pose major challenges for the still-unprofitable companies.

Here are some of the reasons why drivers haven’t gotten back on the road, what might change their minds, and why riders could be facing long wait times, cancellations, and higher prices in the meantime.

As the world shut down last March, drivers, like passengers, were fearful of contracting COVID-19 – but especially so because as contractors, the companies weren’t providing them with healthcare or paid time off.

The exodus accelerated as Uber and Lyft rolled out their coronavirus “sick pay” policies, which initially had strict eligibility requirements, forcing many drivers with preexisting health conditions to make a difficult choice between their physical and financial health.

Lockdown orders eventually drove as many as 94% of passengers off the apps, leaving essential workers and those potentially exposed to the virus as the bulk of the few remaining passengers. Rideshare business, in addition to the driver pool, dwindled for Uber and Lyft.

Los Angeles-based driver Larry Carroll was one of the few drivers who stuck it out the whole time with both platforms – even after what Carroll said was a frustrating back-and-forth with Uber as he tried to prove he qualified for its COVID-19 financial assistance program. (Uber told Insider Carroll initially didn’t submit the required documentation, but said it eventually approved his request and paid him).

“It was like being stabbed in the back,” Carroll said, but added that despite lower demand, driving for Uber has kept him “financially afloat” through two separate shutdowns in California.

But around 60% of the nearly two dozen drivers who discussed their pandemic driving habits with Insider, while not necessarily a representative sample of the companies’ workforces, said they stopped driving for both Uber and Lyft entirely at some point during the past year. 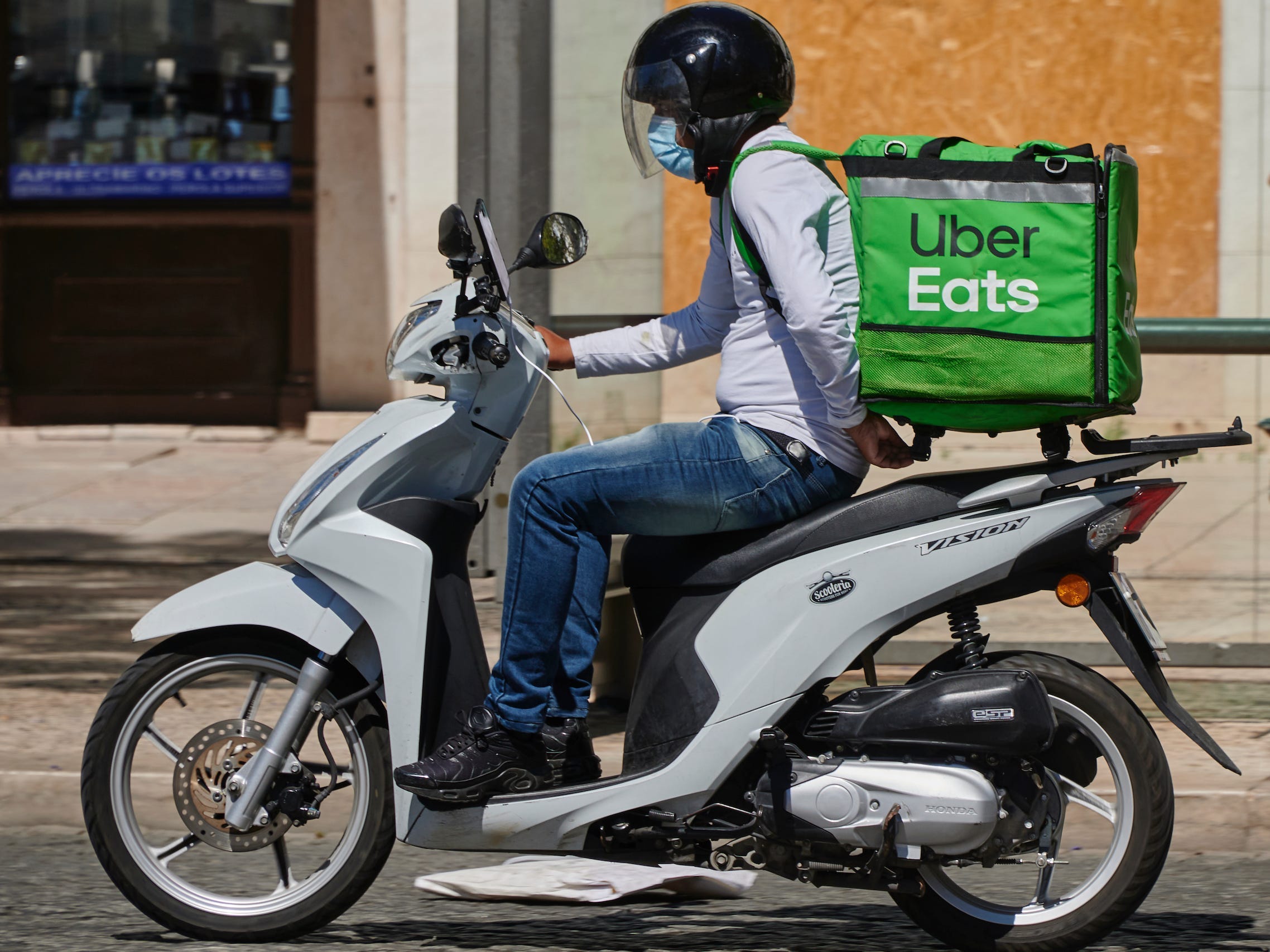 “It’s just easier to deliver food. I live in one of those five sh—y states where 44% of new [COVID-19] cases comes from and it’s just going to be too scary to be that close to people who don’t care,” Daniel Skelley, a former Uber and current Uber Eats driver in Palm Beach, Florida, told Insider.

Uber Eats, DoorDash, GrubHub, Amazon Flex, and Uber-owned Postmates were the most popular among the drivers Insider connected with. But even those apps have proved to be far from lucrative, even as the surge in demand earned investors and company executives billions.

There are also growing safety concerns: Delivery drivers and couriers have been arrested on suspicion of being out past curfew, victimized by a spike in carjackings, and in one case, a DoorDash driver’s vehicle was stolen while his two children were inside.

And of course, as more people begin leaving their homes and eating out again, there are questions about how that will impact the demand for food-delivery workers.

Pushed too far by Proposition 22

As the pandemic escalated toward its peak in the US last winter, rideshare and food-delivery companies poured $200 million into a ballot initiative in California that made their workers contractors, letting the companies avoid having to pay a minimum wage, healthcare benefits, unemployment insurance, and other labor costs, while barring drivers from pushing for better pay and working conditions by unionizing.

Instead, Proposition 22 established a pay floor for California drivers based on a fraction of their time on the road, healthcare subsidies that may only cover 82% of the most basic Affordable Care Act plan, and mandated some basic insurance, safety, and anti-discrimination policies.

While many drivers celebrated the law for preventing Uber and Lyft from making good on their threats to reduce drivers’ flexibility or leave the state entirely, others told Insider the companies’ aggressive campaign signaled to them that they were too willing to sacrifice drivers’ well-being in search of profitability.

“I will never drive again for them and stopped using them as a rider. They have no respect for their drivers, Prop 22 [was] just lies after lies,” a former Lyft driver from the San Francisco Bay Area told Insider.

“Shame on the VCs,” they added, alluding to venture capitalists and other investors who made billions when Uber and Lyft went public in 2019.

When asked what would get them back on the road, one San Diego-based driver simply told Insider: “revoking Prop 22.” 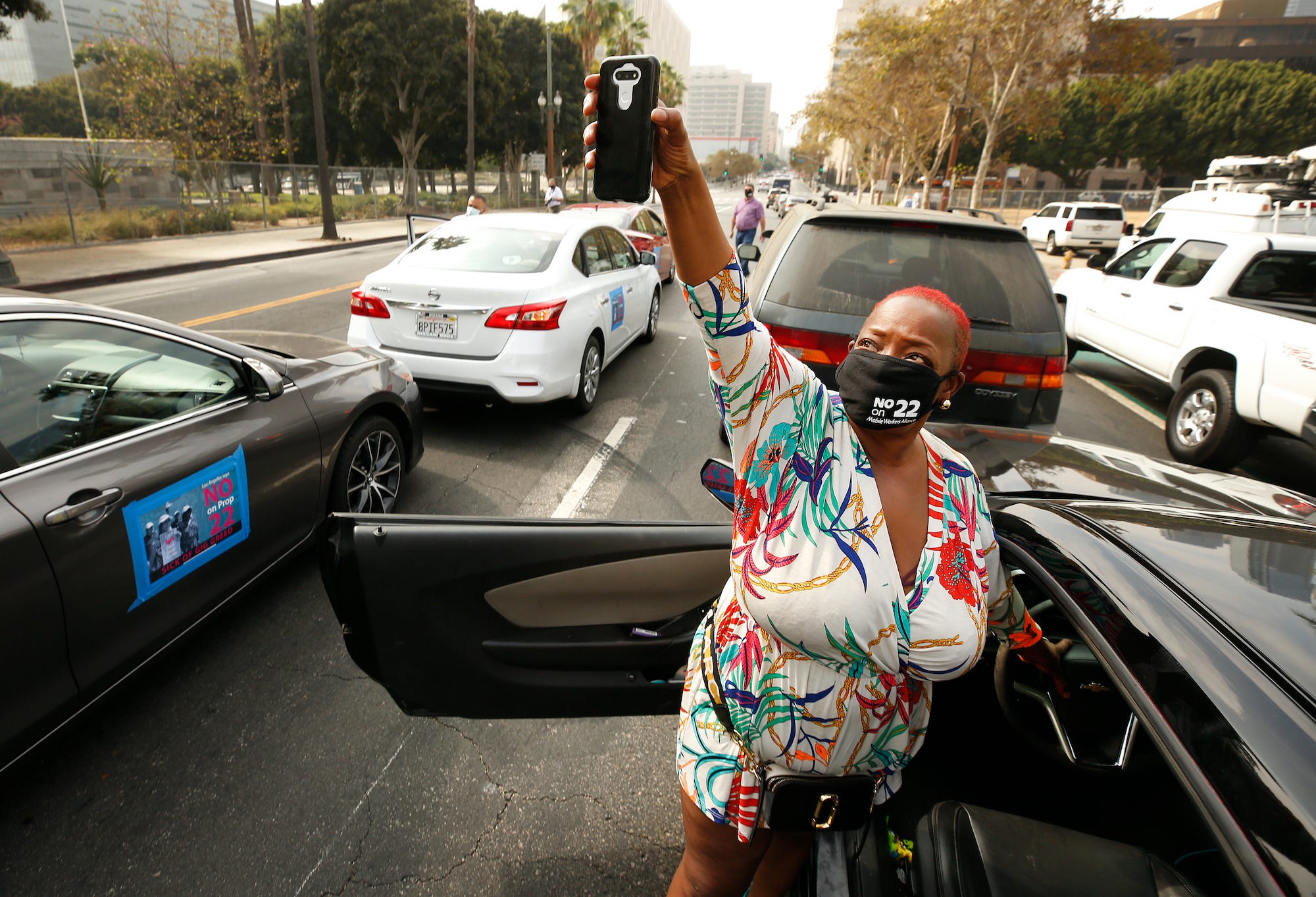 Some people who drove part-time for Uber and Lyft during the pandemic have since called it quits as the gig became higher risk and lower reward.

“I have a full time job already. Uber was a side income,” a former Uber driver in Houston, Texas, told Insider.

“The pandemic motivated me to get a proper job with benefits and protections of the labor laws,” an Uber and Lyft driver from San Francisco said.

Others said they’ve found jobs as realtors, software sales representatives, and school bus drivers. Some have started their own businesses.

One Boston area driver told Insider they plan to eventually start driving with Uber part-time again, but only once their son’s school resumes in-person classes and they have access to after-school care, because “it’s not worth hiring a babysitter.”

However, after widespread layoffs last year, businesses have only recently started rehiring workers. In the meantime, the government has helped keep Americans afloat through multiple rounds of stimulus checks and other economic relief.

For some drivers, that support has been enough to justify staying off the apps.

“The stimulus checks have created a financial safety net for some drivers (especially for the part-time drivers) who don’t need the income from Uber as much,” the Houston-based driver said.

Amid the driver shortage, Uber and Lyft have offered various monetary incentives, from simple rate hikes to bonuses for completing a certain number of rides.

Uber said drivers working 20 hours per week in major cities like Chicago, Miami, and Phoenix are earning between $26 and $31 after Uber’s fee and expenses for every hour they’re on the app. Lyft declined to comment on-the-record about specific driver earnings.

But many drivers aren’t biting yet.

“I might drive for them if I get a crazy generous offer. So far, the best I have received is $30 for one trip, from Lyft. Clearly they just want to see if I’m still interested. I intend to keep them guessing until their curiosity matches my needs,” the San Francisco-based Uber and Lyft driver told Insider.

“If I do drive again, it will only be for the short spell with high earnings until the market is flooded with drivers again,” they added.

Skelley, the Uber Eats driver from Florida, echoed this, telling Insider he’ll only start giving rides again if Uber offers “significantly better pay beyond their on-again, off-again bonuses and incentives that will disappear as numbers get better.” 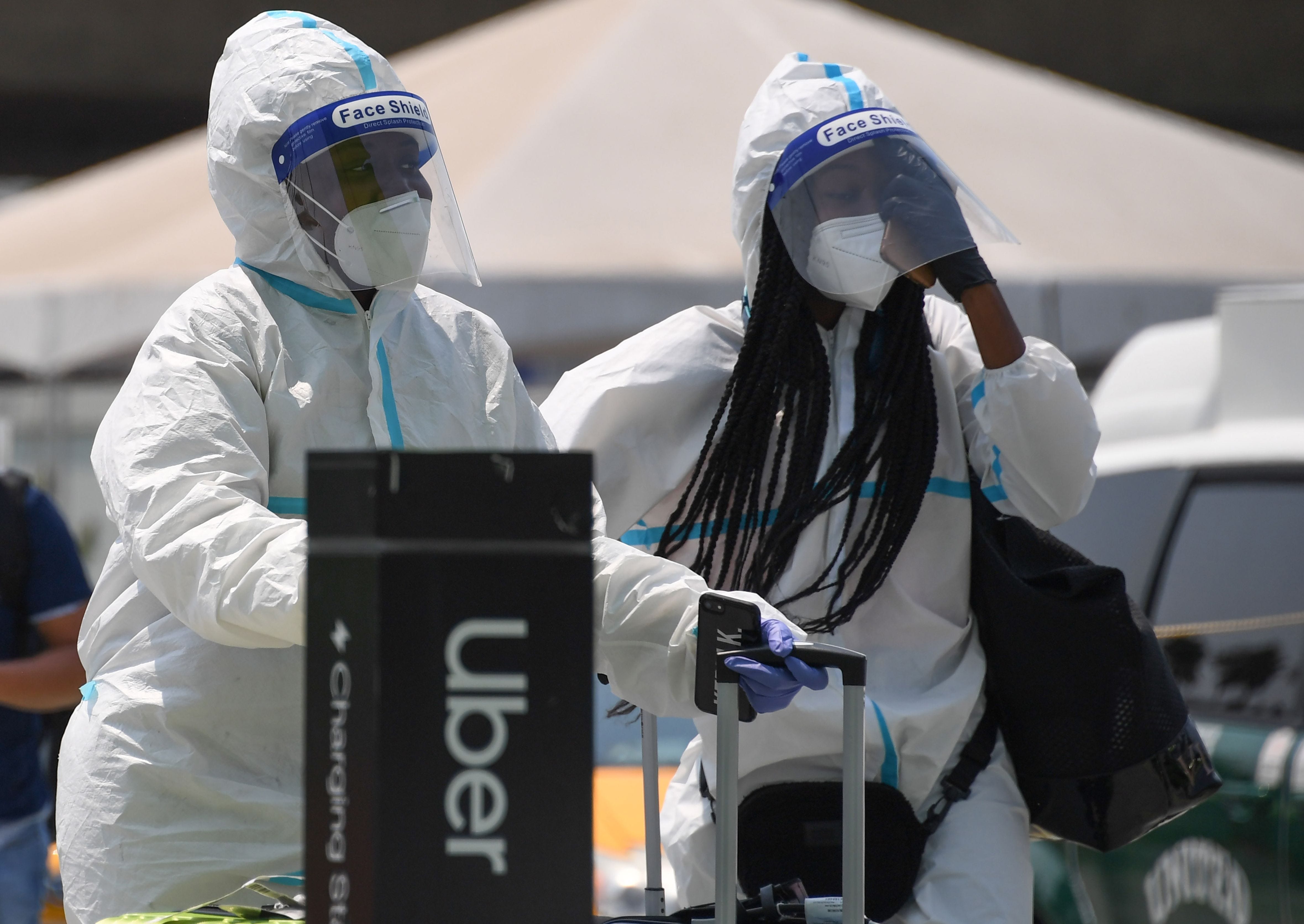 After weeks of declining COVID-19 case numbers and rising vaccine rates, some parts of the US are seeing spikes again, complicating the calculus for drivers reluctant to spend lots of time in close proximity to strangers.

In Portland, Oregon, Linda Smith recently resumed driving part-time for both Uber and Lyft, saying her confidence was bolstered after she got her vaccine, “plus knowing a good portion of the public had, too. And finally having Uber and Lyft make riders wear a mask or be cancelled without driver penalty.”

Both Uber and Lyft have policies requiring riders to wear masks and sit in the back seat; they also allow drivers to cancel trips if riders violate those policies.

A driver in San Antonio, Texas, who said she stopped driving for both Uber and Lyft during the pandemic, told Insider she plans to get back on both apps once she’s vaccinated, and is aiming for the end of May or early June.

Even before the pandemic, driving for Uber and Lyft came with inherent dangers. Both companies faced fierce criticism several years back for not doing enough to prevent riders and drivers from being sexually assaulted while using their platforms.

After years of lobbying against stronger background checks, the companies eventually bolstered the identity verification process for drivers, but hasn’t implemented the same requirements for riders, and some drivers told Insider they still worry about their own safety.

More recently, there has been a wave of carjackings and assaults targeting gig workers.

In March, two teen girls in Washington, DC, were charged with murder on suspicion of fatally wounding an Uber Eats driver with a Taser, CNN reported (Uber said it was “devastated”). Last week, a Lyft driver in Cleveland, Ohio, was held at gunpoint and had his vehicle stolen, the sixth carjacking in the city in a few months, according to a local CBS affiliate (Lyft said it is offering “support” to the driver and has banned the rider).

“Both Uber and Lyft seems to NOT care about my safety. After the fact responses do NOTHING to improve my attitude about driver safety,” Dwight, an Uber and Lyft driver who logs on to the app in the Chicago area during the summer, told Insider.

A week after an Uber driver was murdered in Chicago, the company said it would take additional steps to verify the identities of passengers who use anonymous payment methods. Lyft did not respond to questions about drivers’ safety concerns.

Finally, some drivers are getting back on the road, but not necessarily because they want to.

Jake, a Lyft driver from Sioux Falls, South Dakota, said he was back on the app, but only out of “occupational desperation.”

But Uber said it will be profitable on an adjusted EBITDA basis by the end of 2021, as has Lyft, goals that could put immense pressure on the companies to keep costs – which may include driver pay – down.