Why The Australian Bush Fires Were So Shocking

Australian bush fires have been plaguing New South Wales for the last few days, forcing many in the Blue Mountain area to evacuate and causing the sky in nearby Sydney to turn a rusty orange at times.

Firefighters are now saying that the worst of the fire may be over, which is a huge a relief. Many people are still in a state of shock, however, about how the situation got so out of hand so quickly.

Bush fires are relatively common in Australia’s summer time (December — February), but it’s unusual for the temperature to be so high and humidity to be so low at this time of year.

“Never before have we seen the extent of damage and destruction and wide-scale fire activity at this time of the year,” Rural Fire Service Commissioner Shane Fitzsimmons told CNN, adding that the blaze was “unparalleled.”

In one post on Reddit, a user who was preparing to evacuate from the Blue Mountains contrasted photos from October 2012, when the weather was unseasonably cold, to October 2013, when high temperatures and strong winds created out of control blazes: 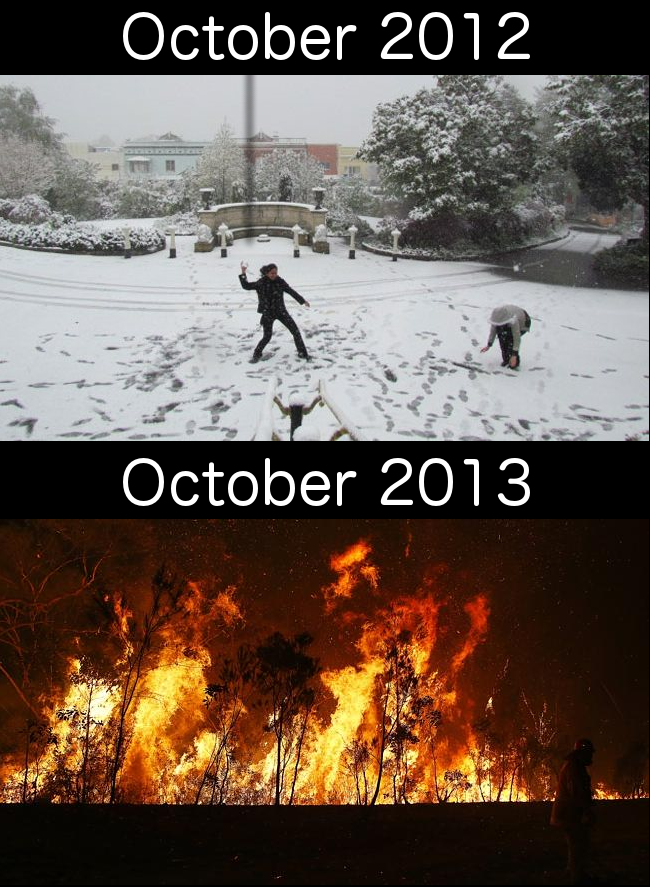 That top photo, incidentally, was taken at the Carrington Hotel in Katoomba, a town where this week firefighters were forced to light their own fires in the hope of slowing down the approaching bush fires.

Australian Prime Minister Tony Abbott has hit back against claims from a U.N. official that the fires were linked to climate change.

“The official in question is talking through her hat,” Mr Abbott said, according to the BBC. “Climate change is real, as I’ve often said, and we should take strong action against it. But these fires are certainly not a function of climate change — they’re just a function of life in Australia.”

So far, the fires have destroyed more than 200 homes and one person has died. While firefighters believe the worst has passed, fears that the dozen or so blazes could turn into one huge “mega-blaze” remain.

“We need to remind ourselves that we have still got a long way to go as we look down the coming months into summer,” Fitzsimmons told CNN.

This map, produced by Google Australia, shows the current extent of the fires: