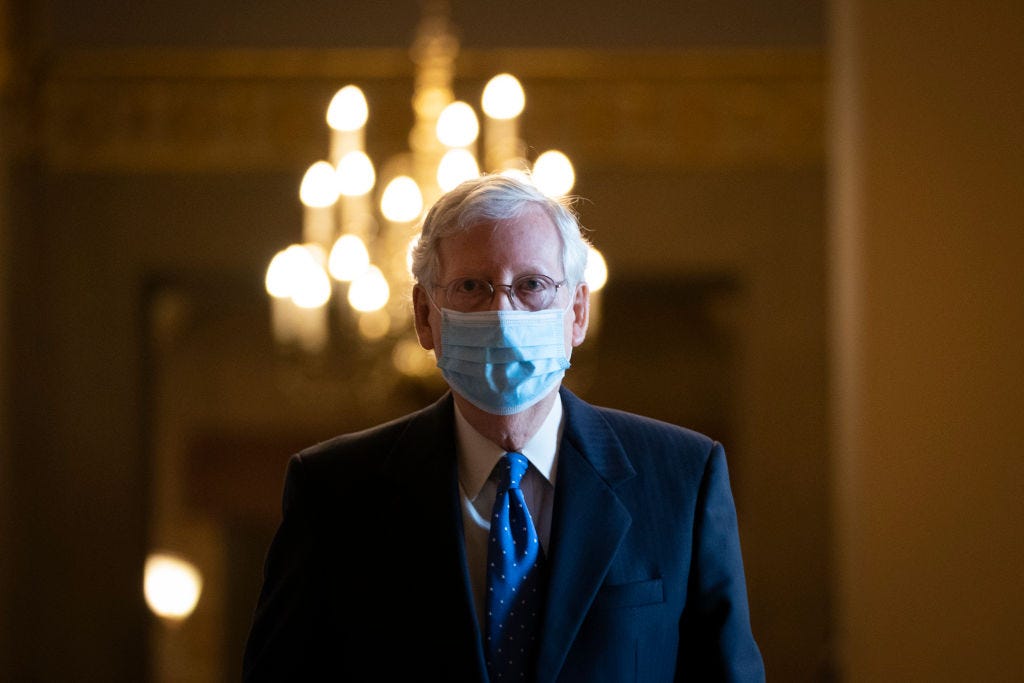 Drew Angerer/Getty ImagesSenate Majority Leader Mitch McConnell leaves his office and walks to the Senate floor at the U.S. Capitol on September 23, 2020 in Washington, DC.

Meanwhile, additional stimulus spending is in doubt before the election.

Following unnerving highs of unemployment in the spring set off by the coronavirus outbreak, the labour market has not yet fully rebounded, according to many economists. The unemployment rate, now at 7.9%, is still well above pre-pandemic levels as an estimated 12 million seek work.

“Too little support would lead to a weak recovery, creating unnecessary hardship for households and businesses,” Federal Reserve Chair Jerome Powell warned last week when he floated the idea of additional government aid.

The climb in COVID-19 cases around the country is the latest threat to restaurants and other struggling businesses. The country currently faces a daily infection average over 50,000 â€” a 19% uptick from the average two weeks ago, according to the New York Times.

Republicans’ rush to confirm a new justice over sending relief to millions of unemployed Americans and state and local governments is the result of longstanding GOP orthodoxies on limited government and transforming the judiciary colliding in a perilous time for the country.

The calculation comes down to a camp of Republicans hoping that a new conservative justice will boost enthusiasm more than the potential risks of being tied to a massive spending package that would increase national debt levels, which some have branded a “blue state bailout.”

This puts them at odds with President Donald Trump, who has abruptly reversed course on bailout talks in recent days and perhaps sensed that Americans’ concerns about the struggling economy are dampening his re-election chances. He has demanded Republicans get back to the negotiating table and “go big.”

Still, Senate Majority Leader Mitch McConnell of Kentucky has refused to consider a large spending package in the coming weeks given his focus on a Supreme Court confirmation. He attempted to answer Trump’s call on Tuesday by signalling a potential vote on a “targeted relief” or so-called skinny relief bill. The Republican leader hasn’t offered many specifics on significant items like direct payments to individuals, relief for health care providers, or state and local government revenue aid.

Similarly, House Democrats, led by Speaker Nancy Pelosi, earlier this week rejected the White House’s $US1.8 trillion stimulus plan offered through Treasury Secretary Steven Mnuchin. Pelosi slammed the deal as too small and claimed on Tuesday that Trump’s renewed interest in relief talks is because he “only wants his name on a check to go out before Election Day and for the market to go up,”Politico reported.

Regardless, Pelosi has also held firm in her position on reaching comprehensive legislation and promised no votes from her caucus on any bare bones plan offered by the GOP.

Amid the political firestorm, there’s also the issue of time. With only three weeks until Election Day, and the Senate booking its floor timing for a Supreme Court confirmation this month, it’s likely there may just be no room for a stimulus vote.

Despite McConnell refusing to consider any hearings for President Barack Obama’s Supreme Court pick in 2016, getting Barrett on the bench ahead of Election Day is now the central priority for the GOP.

With Justice Ruth Bader Ginsburg’s death on Sept. 18, Republicans granting a conservative lock on the court for a generation is suddenly within view, putting other legislative business on the back burner, including a second round of coronavirus relief.

For more than five months, Congress has held up comprehensive stimulus for tens of millions of Americans and left them in limbo. Democrats and Republicans remain in a bitter deadlock since the spring, when the combined record-breaking legislation worth $US3 trillion passed.

The House passed its $US3 trillion HEROES Act in May, followed by revised $US2.2 trillion version in October, though the Senate has failed to pass any new coronavirus relief since April 21.

Trump’s sudden push for a bigger package runs up against two main objections from Republicans and his own statements:

Both of these contentions stem from hardline GOP thinking on limited government spending and balanced budgets, despite both the federal deficit and debt mounting more rapidly under Trump than during Obama’s tenure.

What’s been said and done

A major faction of Senate Republicans have refused to say yes to another round of stimulus, halting the support needed for a new bill to pass. These fiscally conservative members argue that the economy reopening should stave off the need for any further splashes.

Republican Sen. Ted Cruz of Texas said in July, ahead of his party’s introduced $US1 trillion bill that has gone nowhere, that he’s “not only a no, I’m a hell no.”

Similarly, Republican Sen. Rand Paul of Kentucky was also the lone GOP senator to join Democrats and vote no on a slimmed-down $US500 billion Senate coronavirus bill that failed to advance on September 10.

“I foresee a catastrophe for the market if the Democrats win the election and we keep borrowing money,” he told Fox News earlier.

However, many economists, including Powell, have widely dismissed the concerns over deficit levels and said fiscal spending in the short-term is necessary in a national emergency to stimulate growth.

“Even if policy actions ultimately prove to be greater than needed, they will not go to waste,” he said.