Why the NBA world loves Nikola Jokic — the Nuggets' goofy, 7-foot Serbian star who's been compared to Tom Brady and is dominating the playoffs 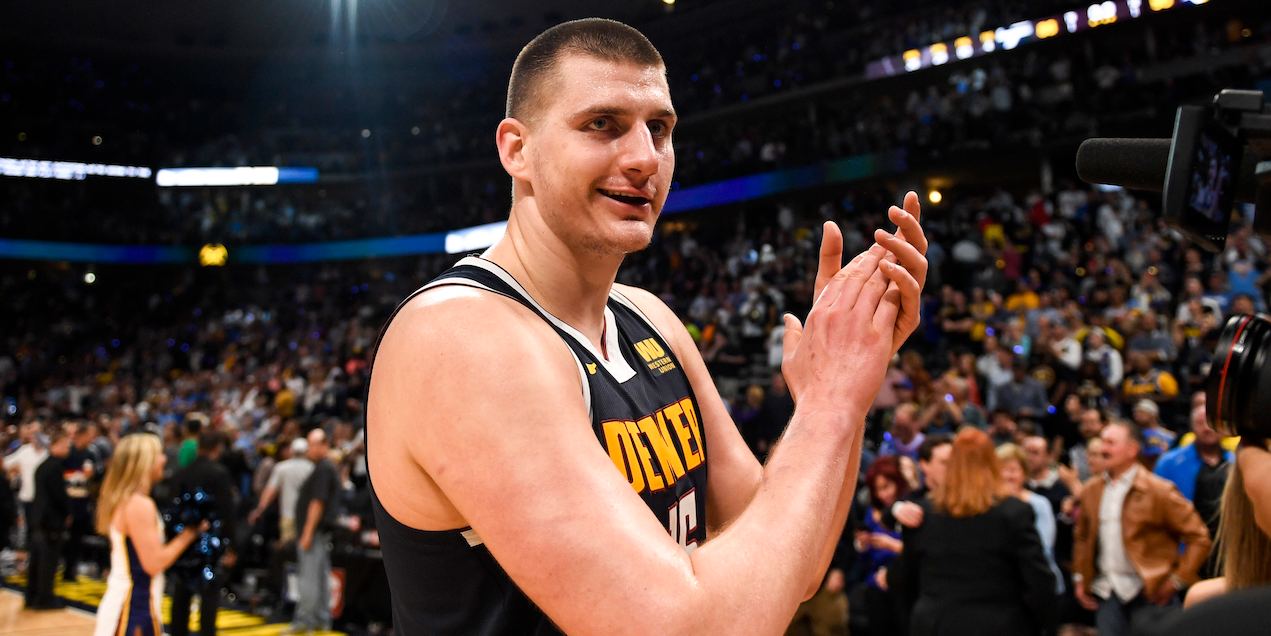 Nikola Jokic has become one of the best players in the NBA and a fan favourite in recent years.

The 25-year-old Denver Nuggets centre was a little-known second-round pick from Serbia who exploded onto the scene in 2014 with a unique game. For the second year in a row, he’s dominating the playoffs for the Nuggets, helping them advance to the Western Conference Finals.

Between his unique game on the court, which is a mix between point guard and centre, and his fun personality off of it, Jokic has quickly established himself as a must-watch superstar.

Here’s how Jokic became one of the best and most beloved players in the NBA.

Jokic’s current stardom is even more impressive when considering his humble beginnings growing up in Serbia. 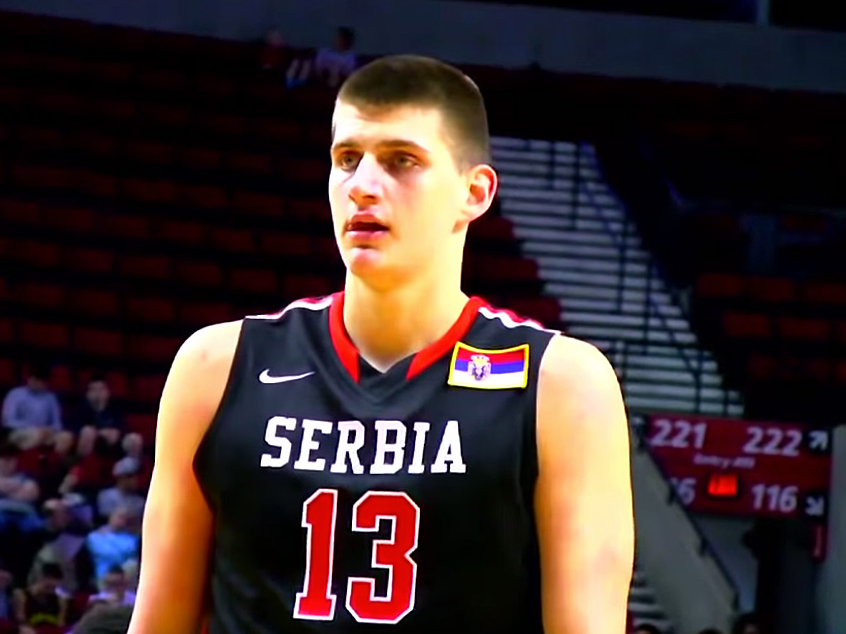 Jokic grew up playing basketball, but played several other sports, too, including soccer, water polo, and harness racing. 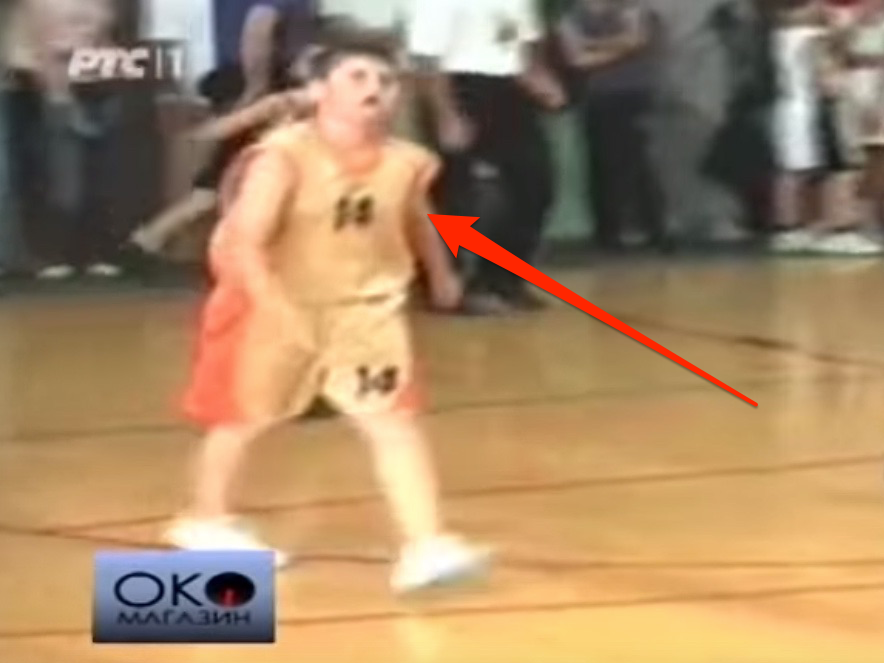 Despite being an active kid, Jokic was considered “obese” growing up, according to a former coach. Jokic had a love of sweets and drank as much as three litres of Coke per day. 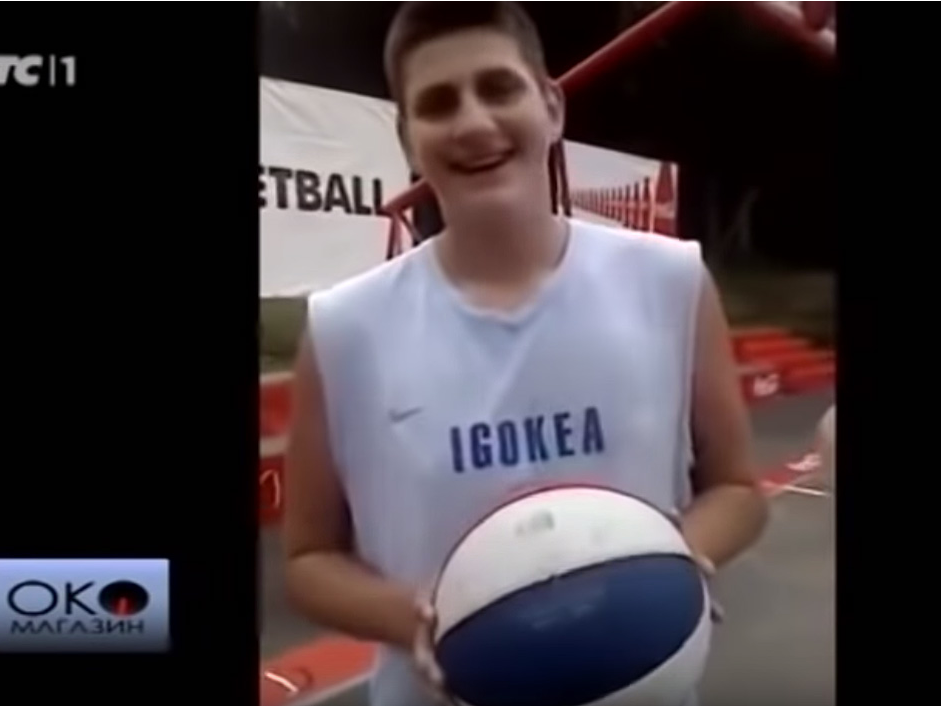 When Jokic was 17, playing professionally in Serbia, he was 7 feet and weighed 300 lb, but couldn’t do a push-up. 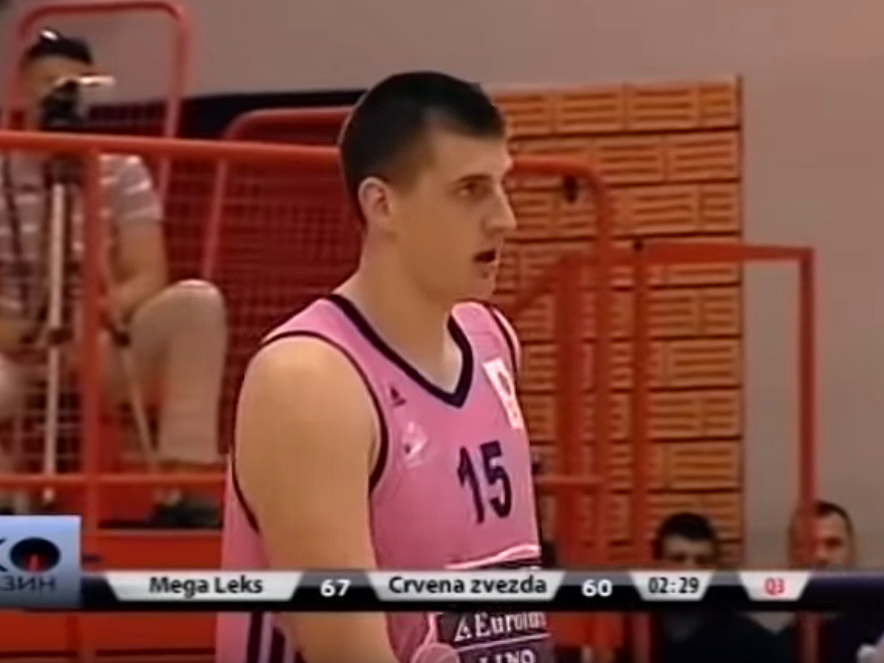 Despite concerns about his body, the Denver Nuggets scouts liked Jokic’s talent and took him with the 41st overall pick in the 2014 NBA draft. 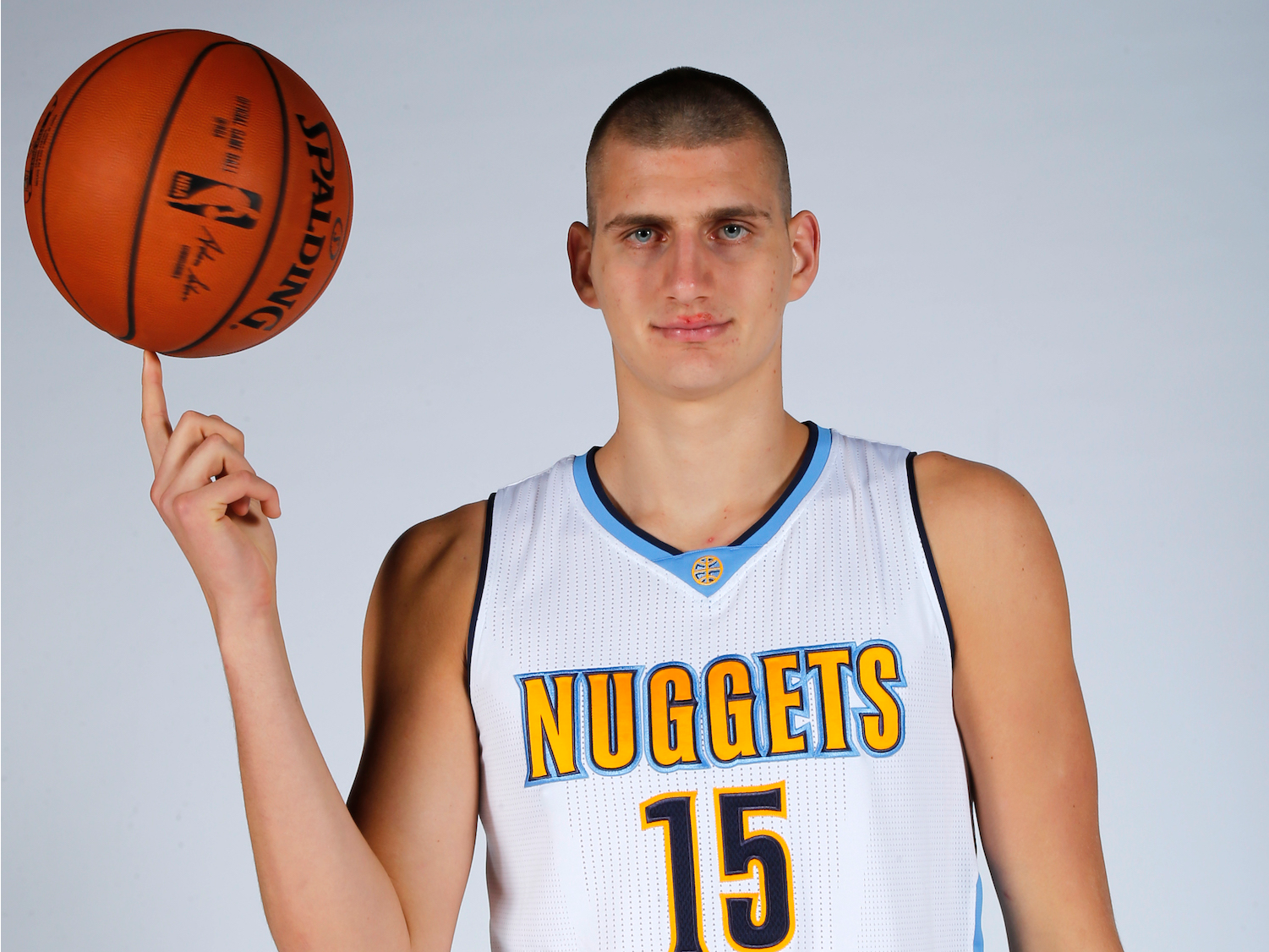 However, Jokic remained overseas for another year and would have longer if not for a poor performance that may have benefitted his career long-term. 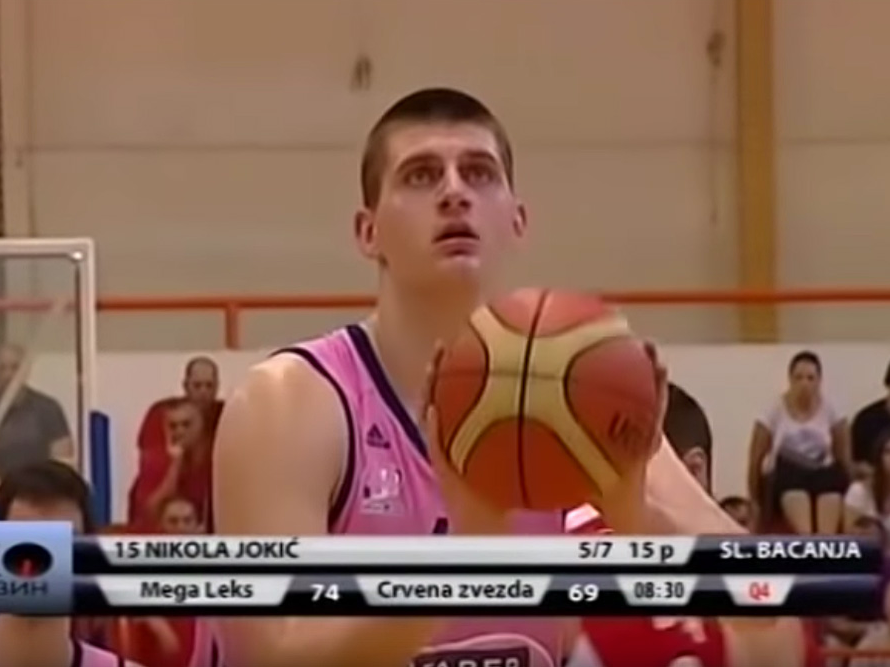 According to Sports Illustrated, Jokic was prepared to sign a multi-year deal with FC Barcelona to stay overseas, delaying his move to the NBA. But while playing in front of Barcelona officials, he had a horrible, 4-point, 3-rebound game that gave them pause. When they delayed the signing, he decided to join the Nuggets in 2015.

Jokic still had work to do when he got to Denver. He gave up soda entirely, drinking his last Coke on the flight to Denver. 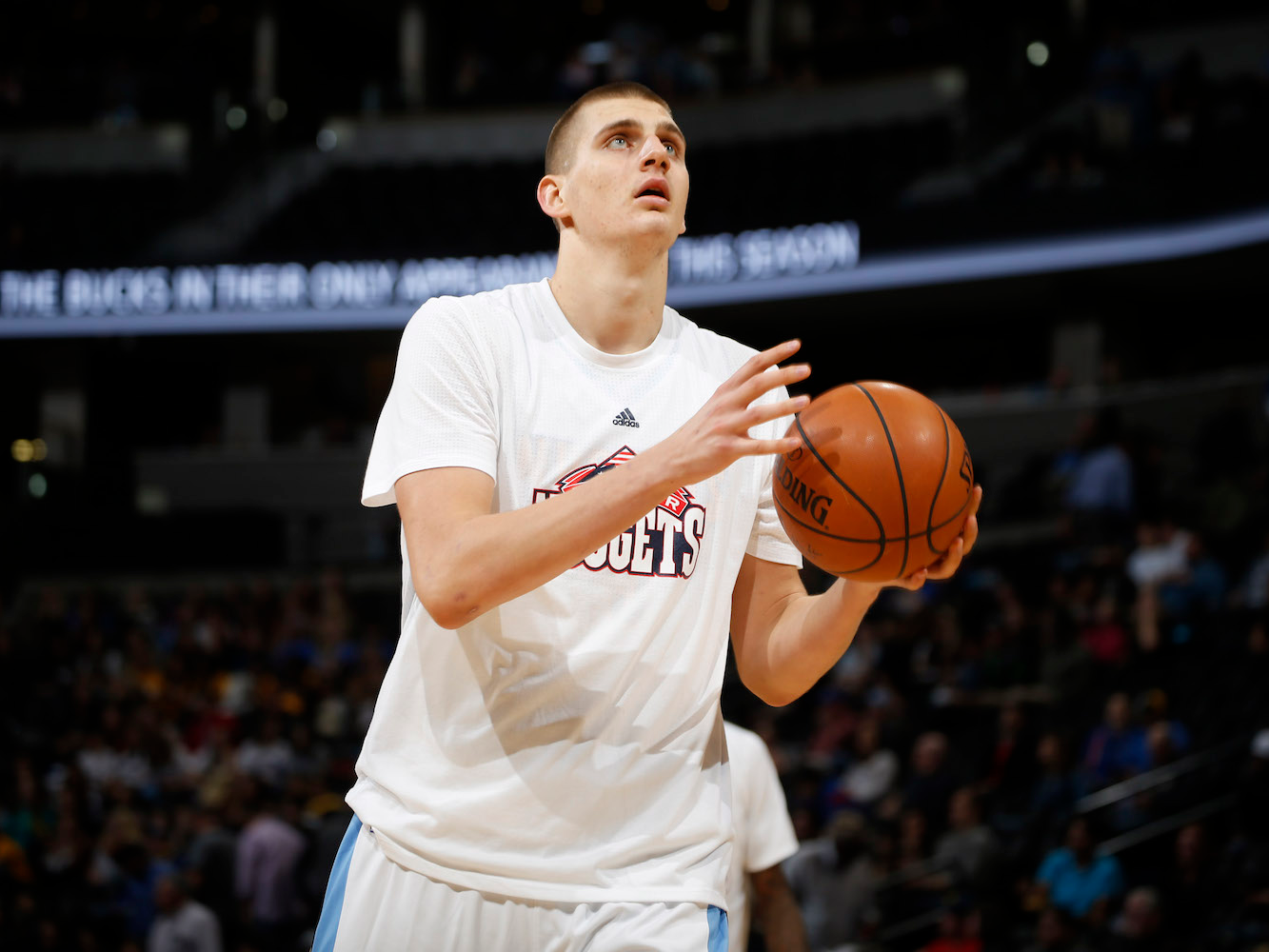 Jokic also had to improve his strength. The Nuggets put him through a plank test when he arrived from Serbia, and he couldn’t do a plank for longer than 20 seconds. Jokic’s rookie season began slowly, but he eventually showed glimpses of his unique talent as he got more playing time. Jokic has made gigantic leaps each successive season, raising his scoring averages from 10 to 16 to 18 to 20 over his career. He made his first All-Star team in 2018-19 while averaging 20 points, 11 rebounds, and 7 assists per game. 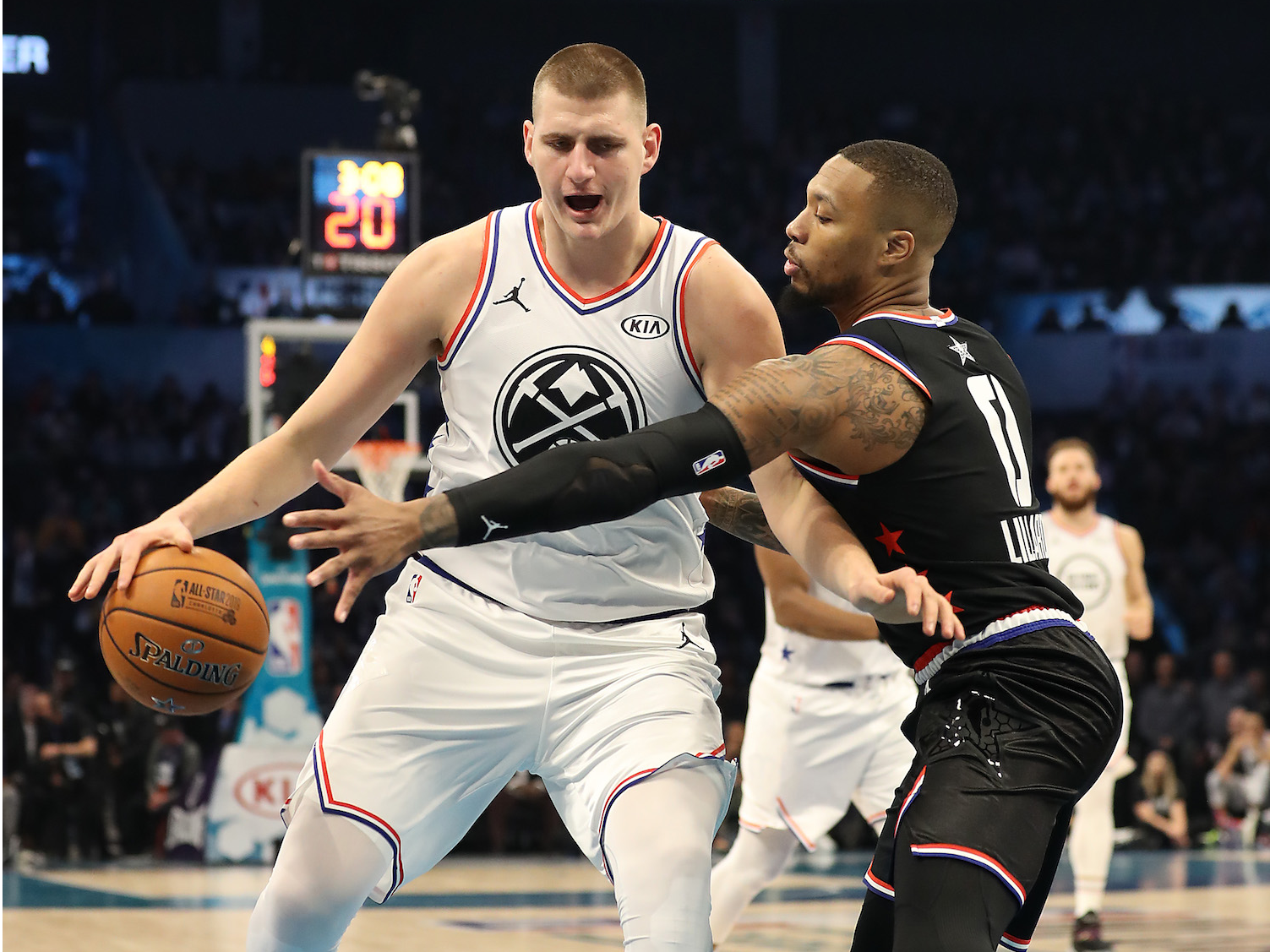 Jokic has become one of the NBA’s elite triple-double threats. Over the last four seasons, he has 41 combined triple-doubles, third-most in the NBA. 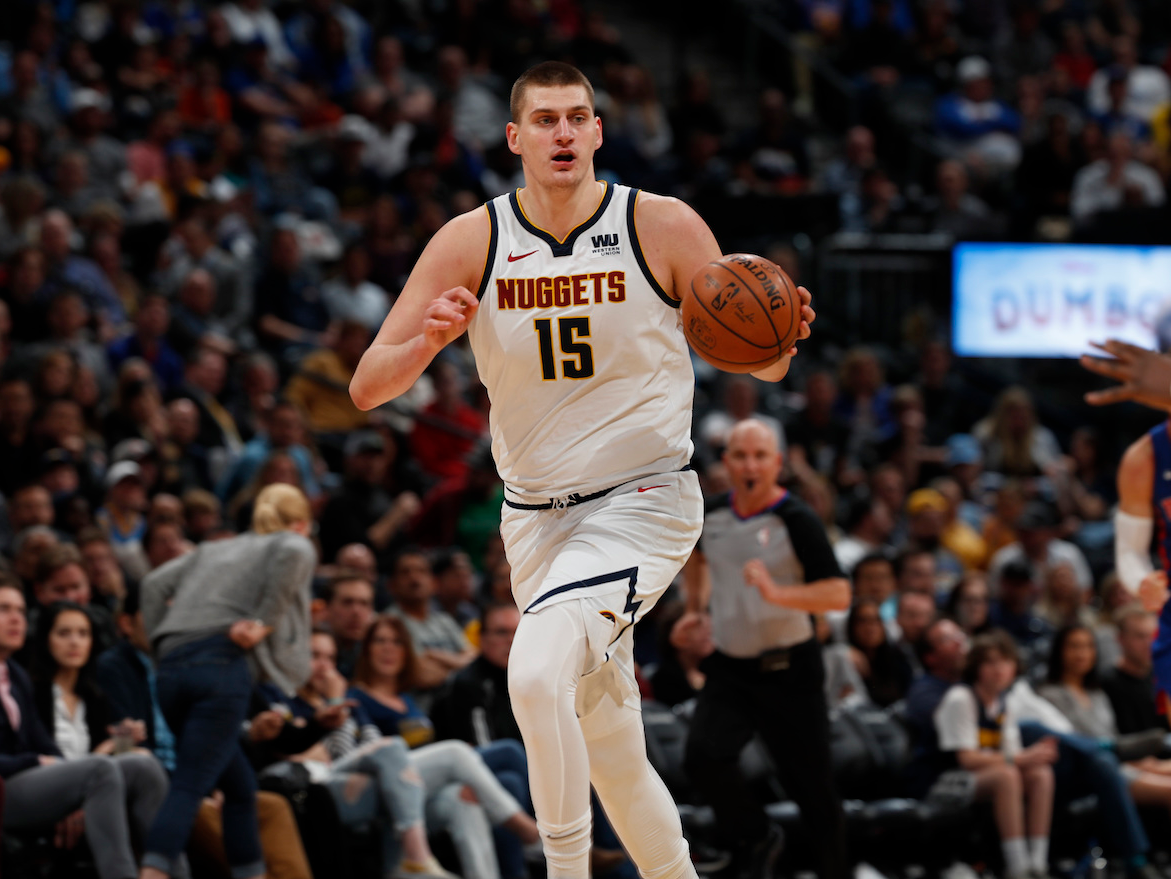 What stands out most about Jokic is his passing. He’s one of the best passers in the league, and by far the best among big men. He used to dub himself “a fat point guard.” Sabonis was a Lithuanian centre with the skills of a point guard. He dominated European leagues for years, but didn’t come to the NBA until he was 31, meaning many American basketball fans never saw him in his prime.

Billups said Jokic is giving a glimpse at what Sabonis was like in his prime.

His passes range from beautiful no-looks…

… to laser passes that somehow bend around defenders… 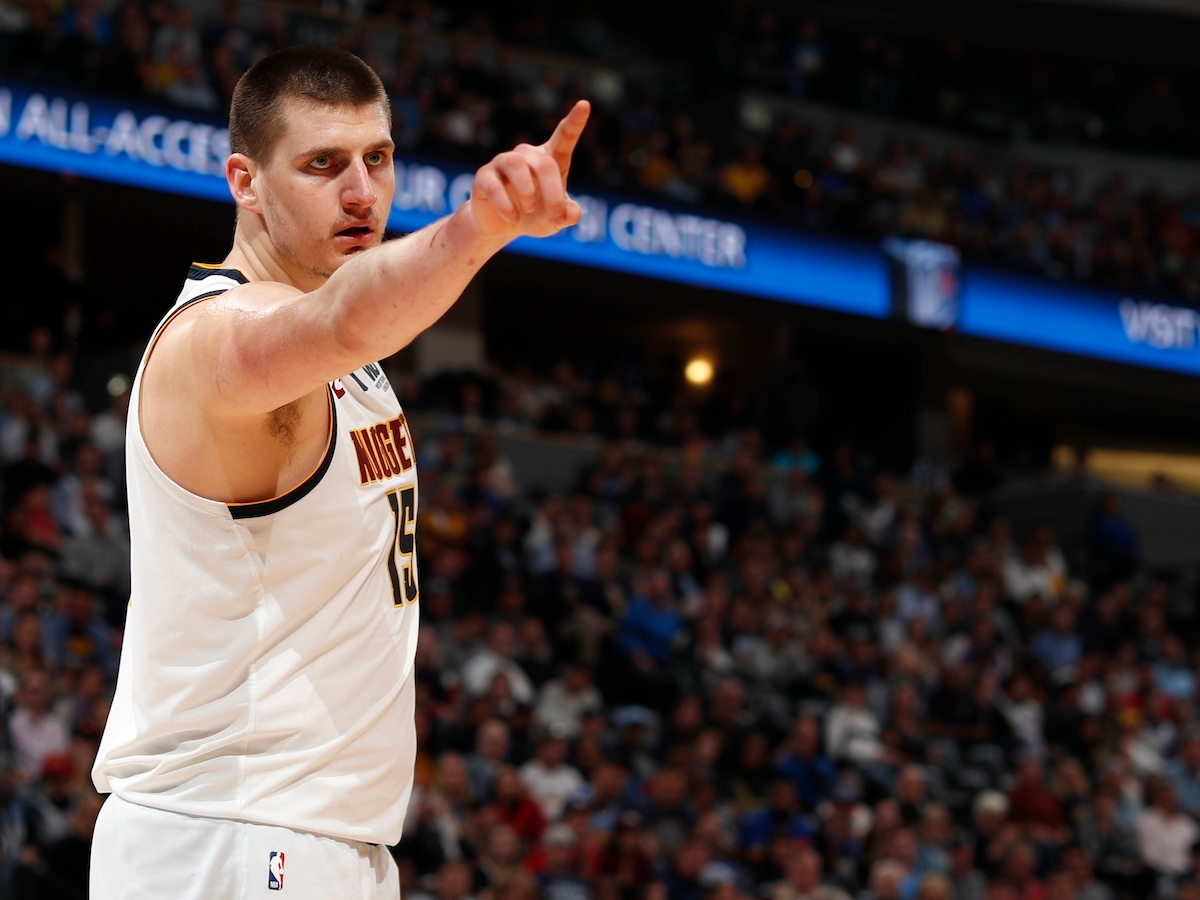 “He’s like a quarterback out there,” Millsap said. “I consider him like a Tom Brady. He’s always going to pick you apart and make the right reads. Commend him for doing that at this stage in his career. It’s unbelievable.”

“If I see something, even if it’s risky, I am going to try it,” Jokic told ESPN. “Because maybe that mistake is going to open up something else, or next time it is going to be there just to give it a chance.”

Nuggets GM Arturas Karnisovas compared Jokic to a brilliant painter: “He’s an artist. If you ask famous painters, ‘How’d you do that?’ they say, ‘I just did it.’ It’s the same if you ask Nikola: He has a hard time explaining. He just does it and it happens.” His game was lovingly described by SB Nation’s Seth Rosenthal as playing as if he was wearing flip-flops — a strangely perfect simile.

This dude plays every minute as if he’s wearing flip-flops yet is a borderline MVP https://t.co/uamMsu90px

In 2018, the Nuggets rewarded Jokic with a five-year, $US148 million contract. 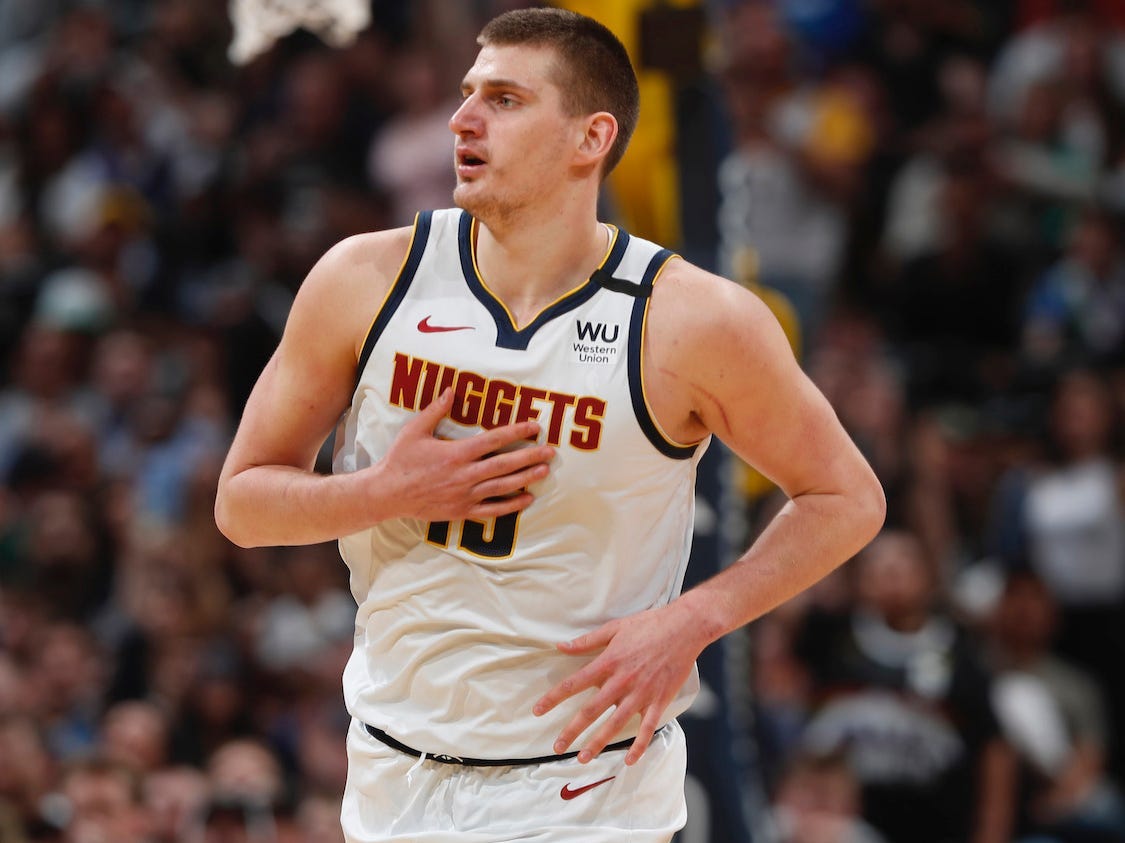 For the second straight season, Jokic has taken his game up a notch in the playoffs. 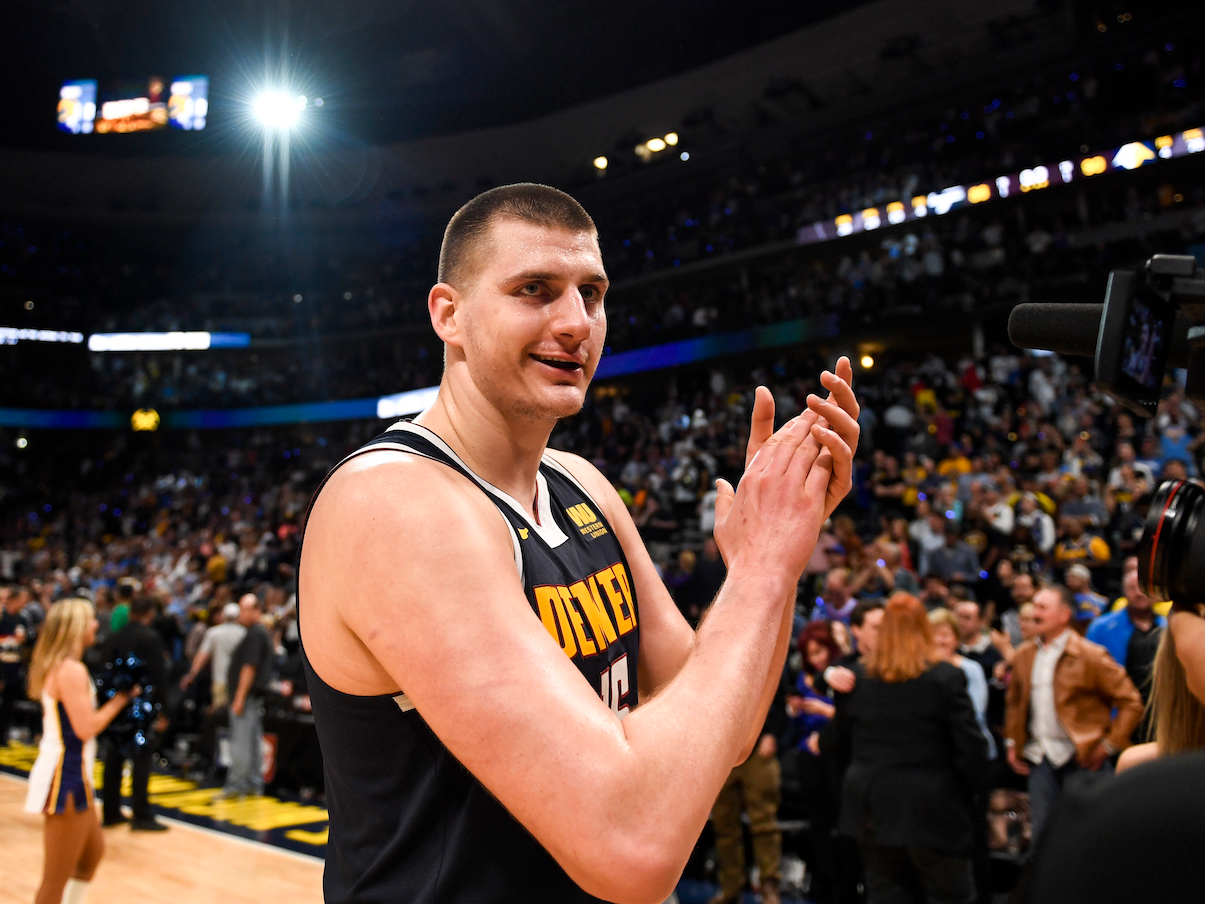 The Nuggets are onto the Western Conference Finals, having come back from 3-1 series deficits to beat the Utah Jazz and LA Clippers

This postseason, Jokic is averaging 25 points, 10 rebounds, and 6 assists per game while shooting a ridiculous 51% from the field, 44% from 3, and 83% from the free throw line. 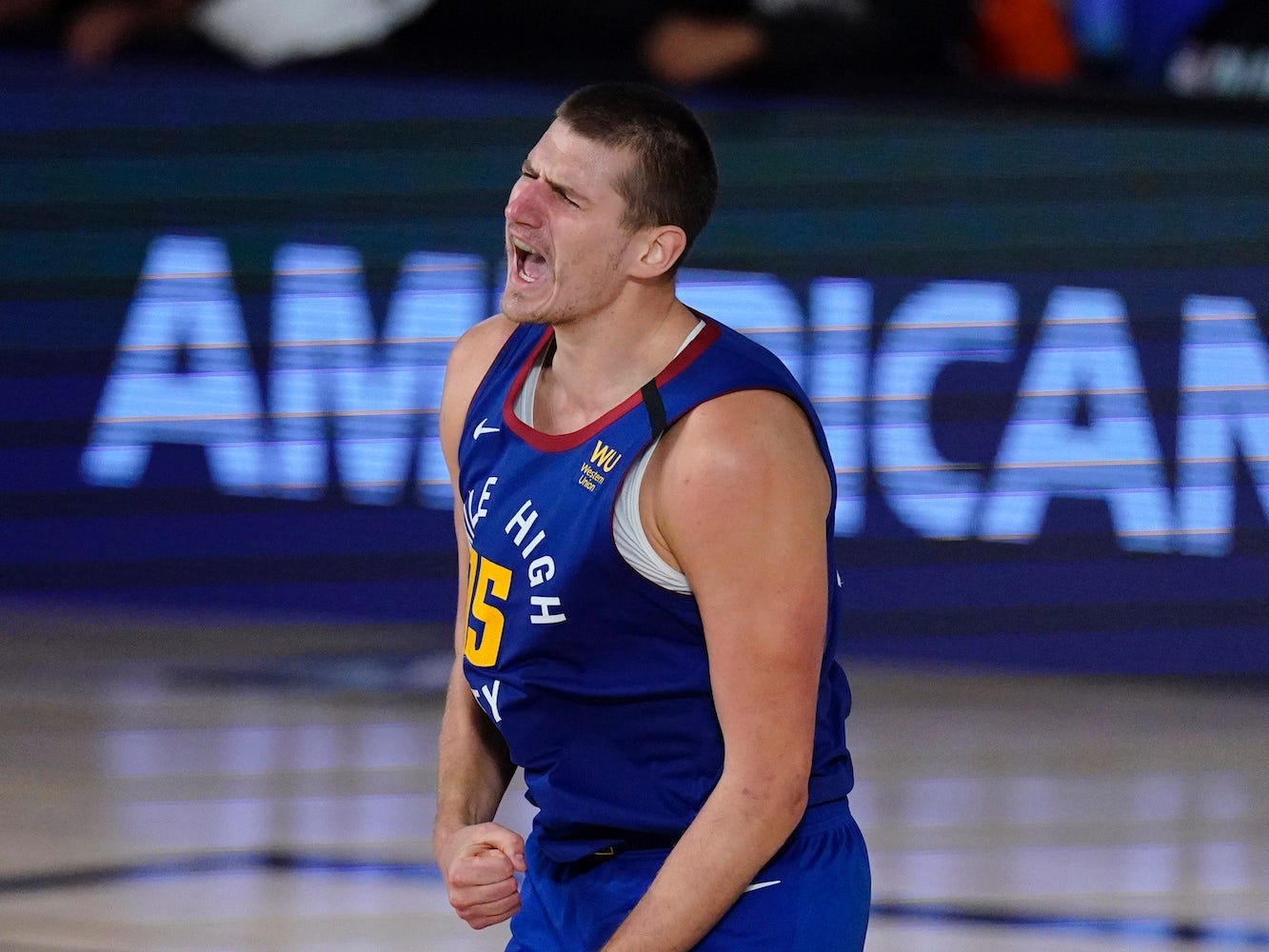 While finishing off the Clippers in a big upset Game 7 win, Jokic threw a no-look pass over his head, just for good measure.

It's Nikola Jokic throwing an on-the-money no-look pass over his head up by 20 in Game 7 for me pic.twitter.com/PMPVYsK7PV

Jokic impressed observers in the second round of the playoffs last year when he had to play 65 minutes in a quadruple-overtime game. He totaled 33 points, 18 rebounds, and 14 assists, but the Nuggets lost to the Blazers. Jokic’s conditioning has always been questioned, but he has laughed off the critiques before. 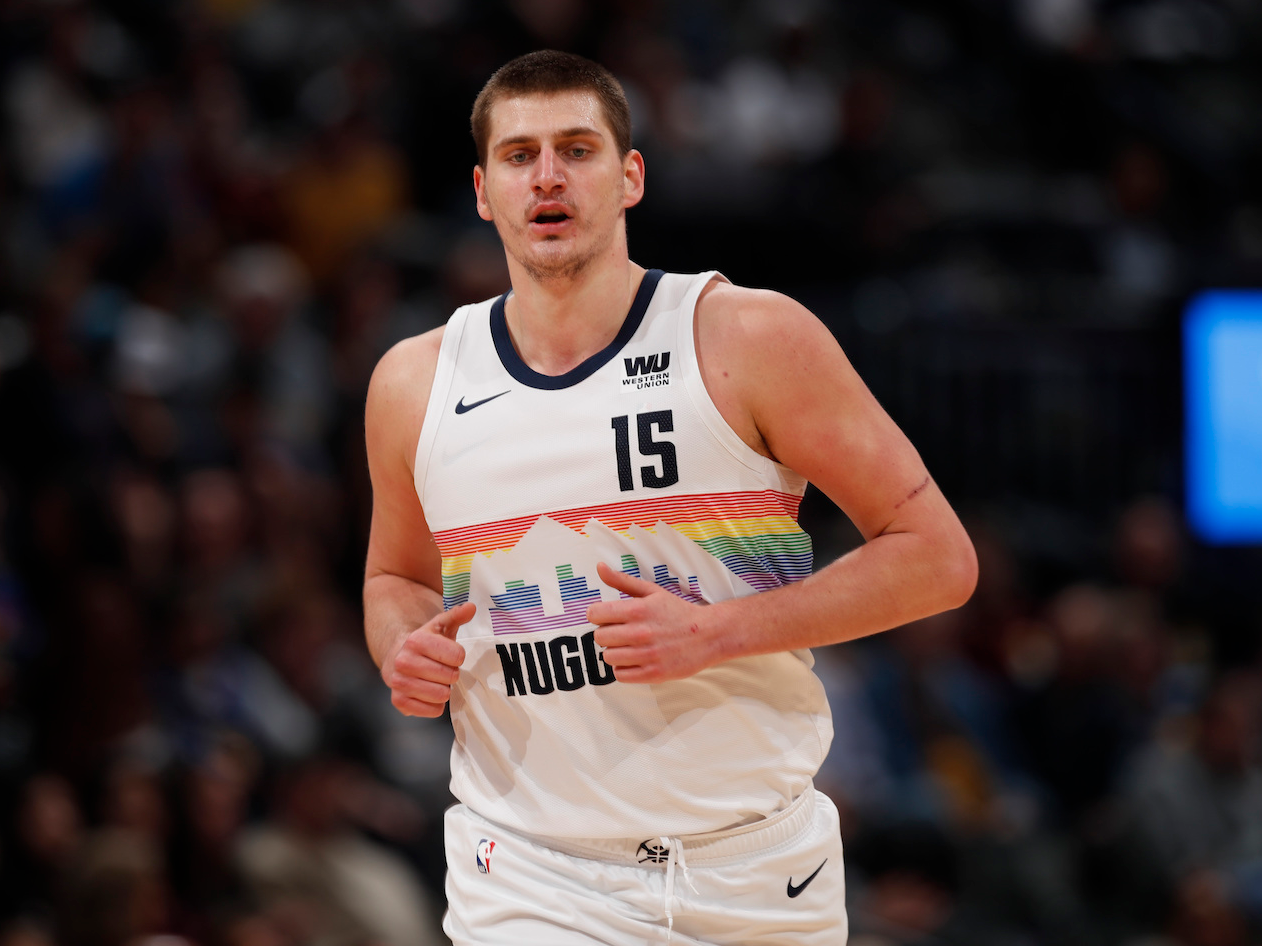 “To be honest, sometimes it is funny for me just because [sometimes what they say] it’s true, and [yet] I am still playing in the NBA.

Jokic’s personality has made him beloved in the NBA, too. He’s nicknamed “Joker” because of his last name and his wry sense of humour. 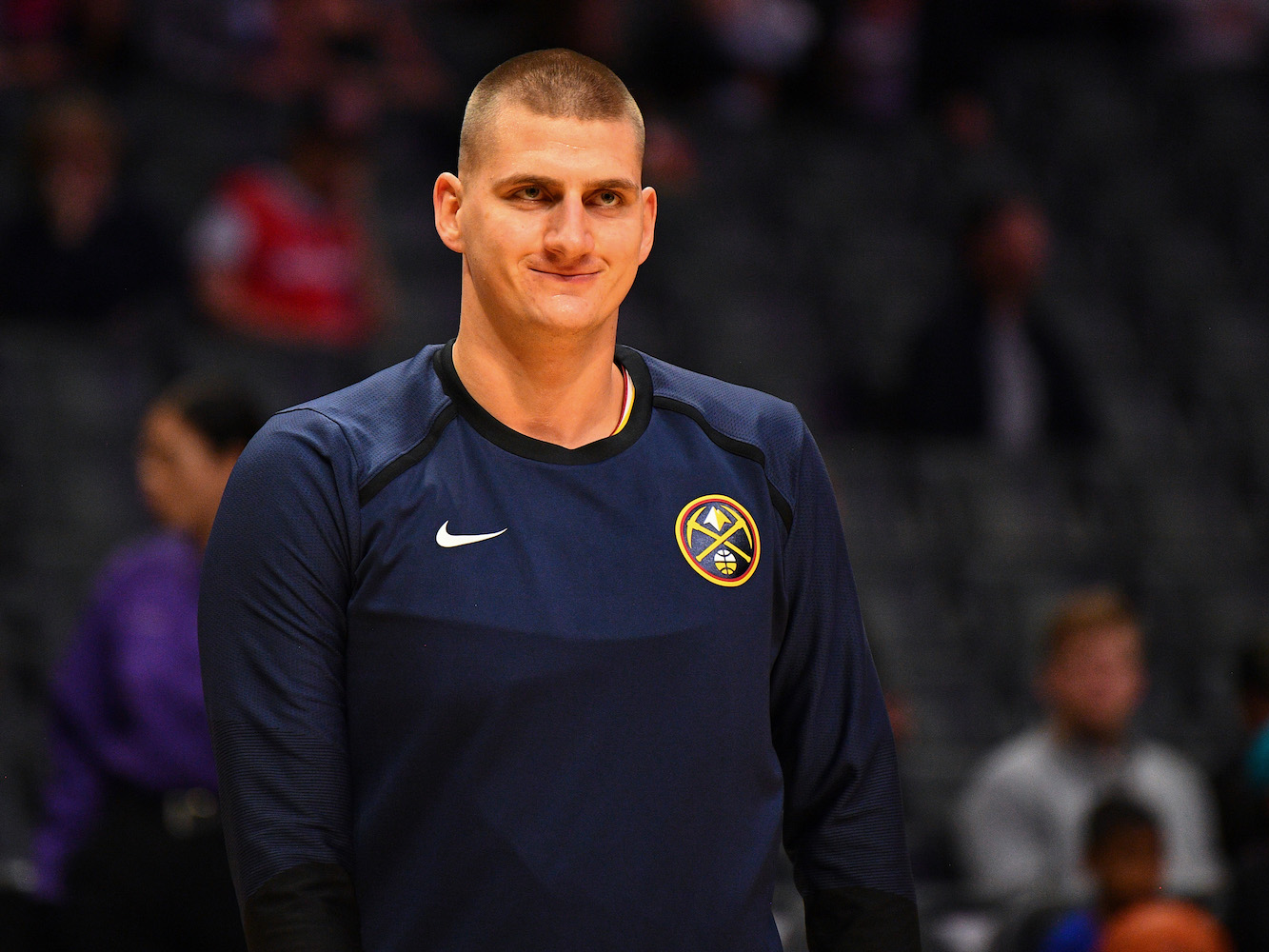 In the 2019 playoffs, Jokic’s struggles with the microphones at postgame press conferences became a fun battle.

He told ESPN: “It’s a fight … hopefully at the end of the season, I am going to beat the mic.”

Nikola Jokic vs. the postgame mic is the closest series this playoffs ???? pic.twitter.com/RGgEVGY708

Jokic’s brothers have also gained notoriety in the NBA world. Both former basketball players, they moved to the U.S. with Jokic and now follow him around. 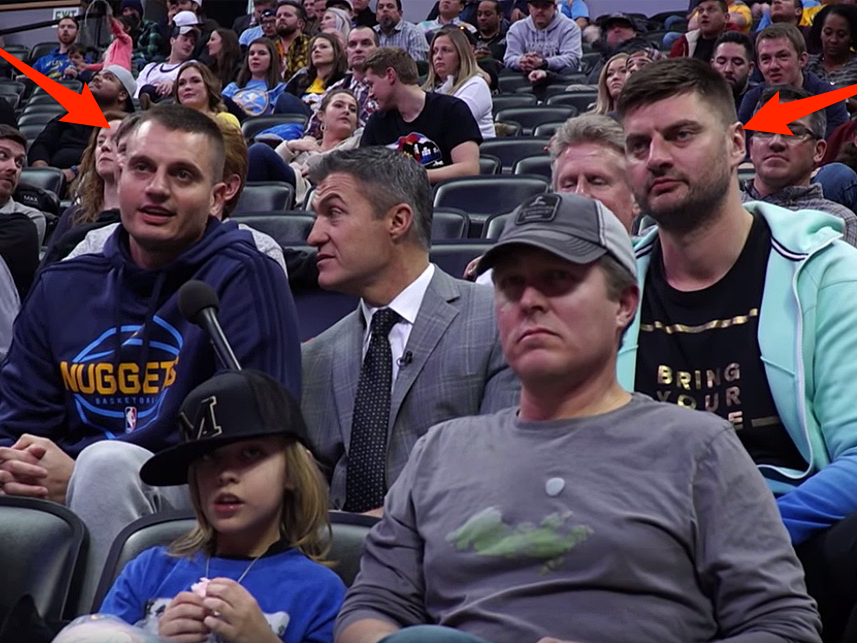 Said Jokic of his brothers: “They look like serial killers, but they are actually really nice people when you meet them.”

He’s kept pieces of his upbringing with him. He told ESPN’s Zach Lowe that he kept a stash of Serbian meats in his home, just for when he misses home-cooking the most. 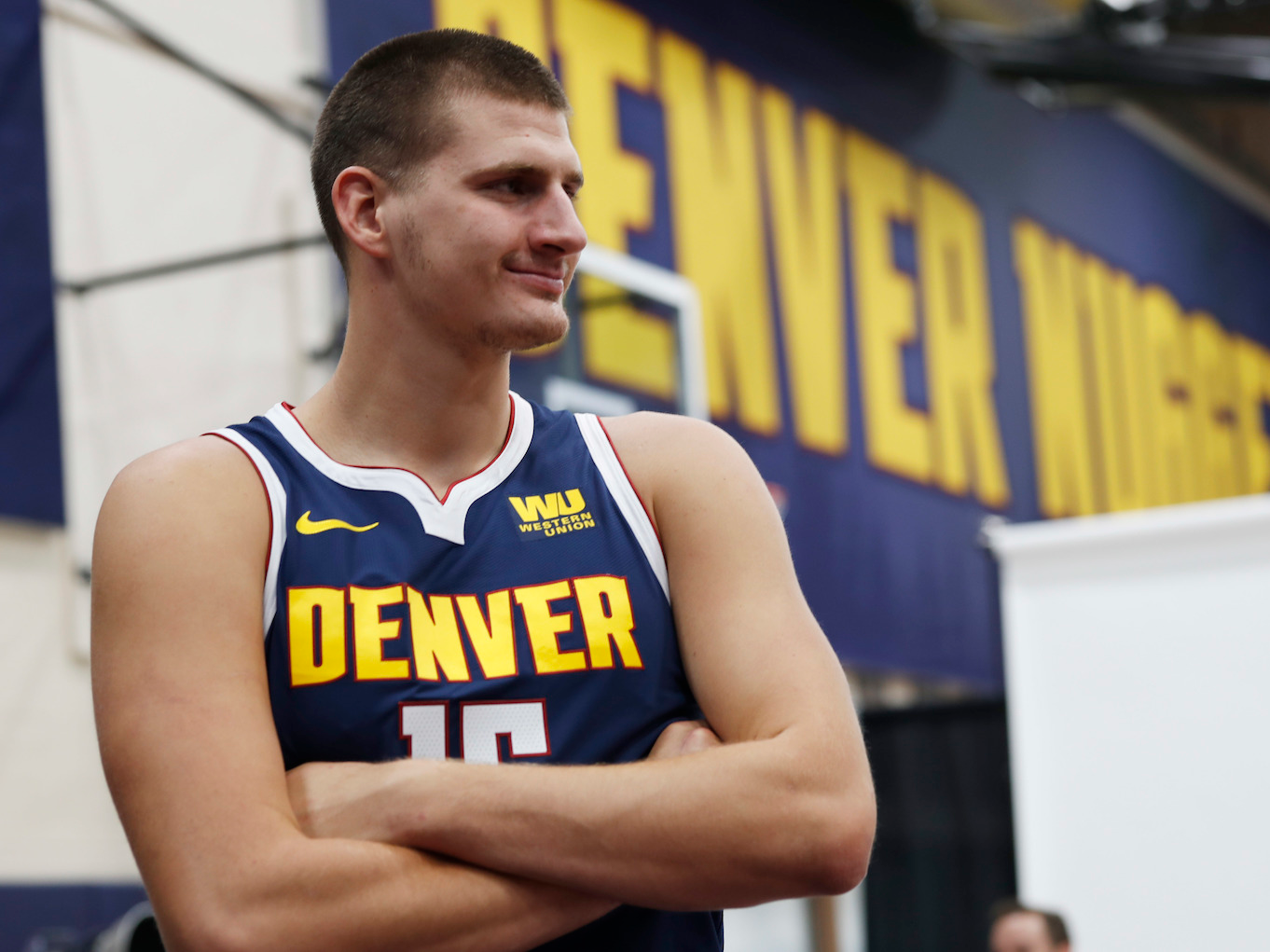 Jokic also owns six horses back in Serbia and still loves watching horse racing. “I enjoy animals. Their nature. They’re really good animals. Every different horse has a different personality, like a human,” he said. 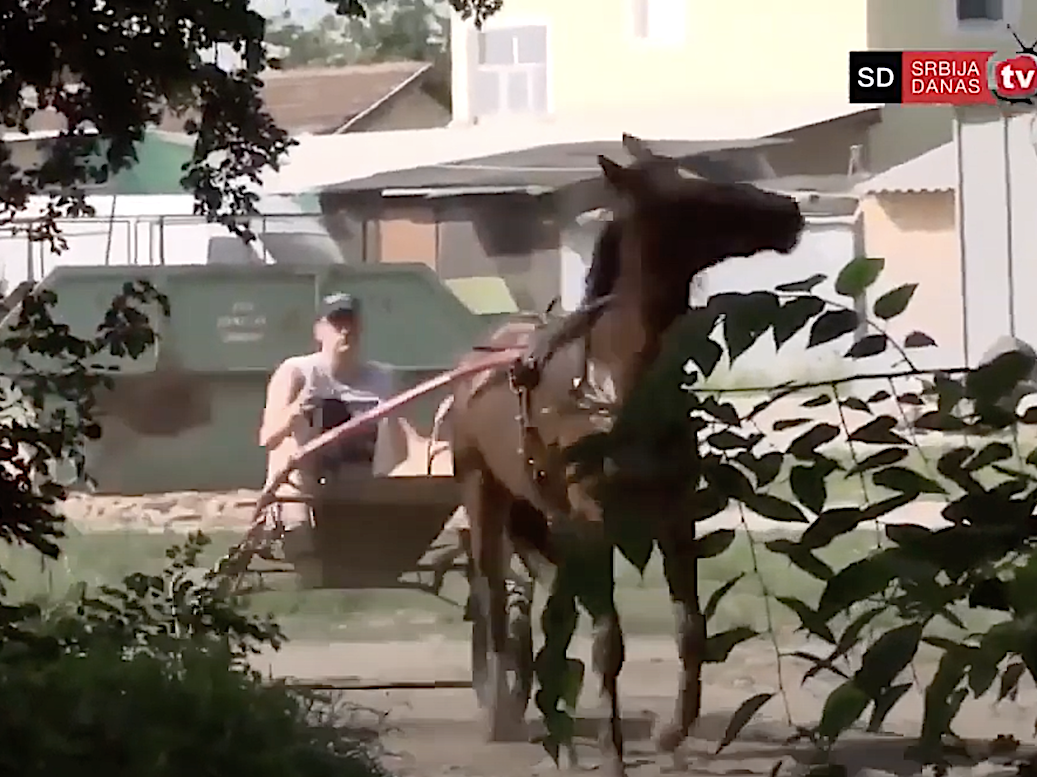 Nuggets guard Gary Harris visited Jokic in Serbia and got to visit the stable with Jokic’s horses.

“It’s great to see him in that element,” Harris said. “He takes great care of the horses, and you can see that the horses love him. You can really see the relationship between them.”

In some ways, Jokic is still the goofy kid from this old passport photo:

Looks like someone will be getting a new passport today! pic.twitter.com/cy8UQm61sH

He may not look like one, but Jokic is a legitimate superstar who has his team in contention for an NBA Finals appearance.