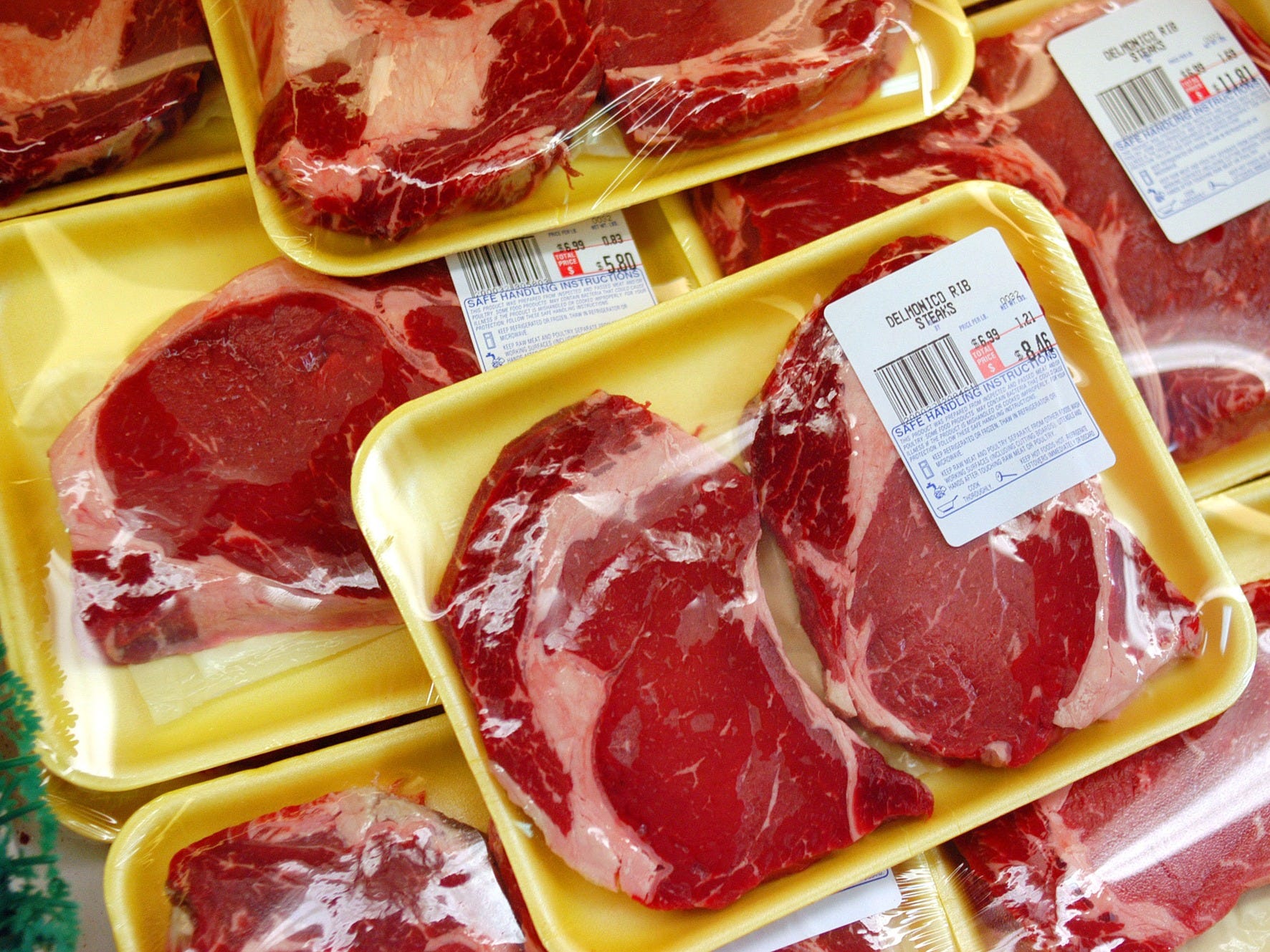 Getty Images/William Thomas CainMeat products can be a healthy part of a balanced diet. However, eating too much of them has been linked to health issues.

Over the last few months, the coronavirus pandemic has caused meat factories nationwide to temporarily close in order to prevent outbreaks within the plants, sparking a potential meat shortage and break in the meat supply chain for American consumers.

Some plants have begun to reopen in recent weeks, but many issues still remain that could affect Americans’ access to red, white, and processed meat products.

However, while shortened supply and higher meat prices are not good news, there is a number of reasons limiting your meat intake could make you healthier in the long-run.

Here are seven reasons why the meat shortage might actually be good for your health. 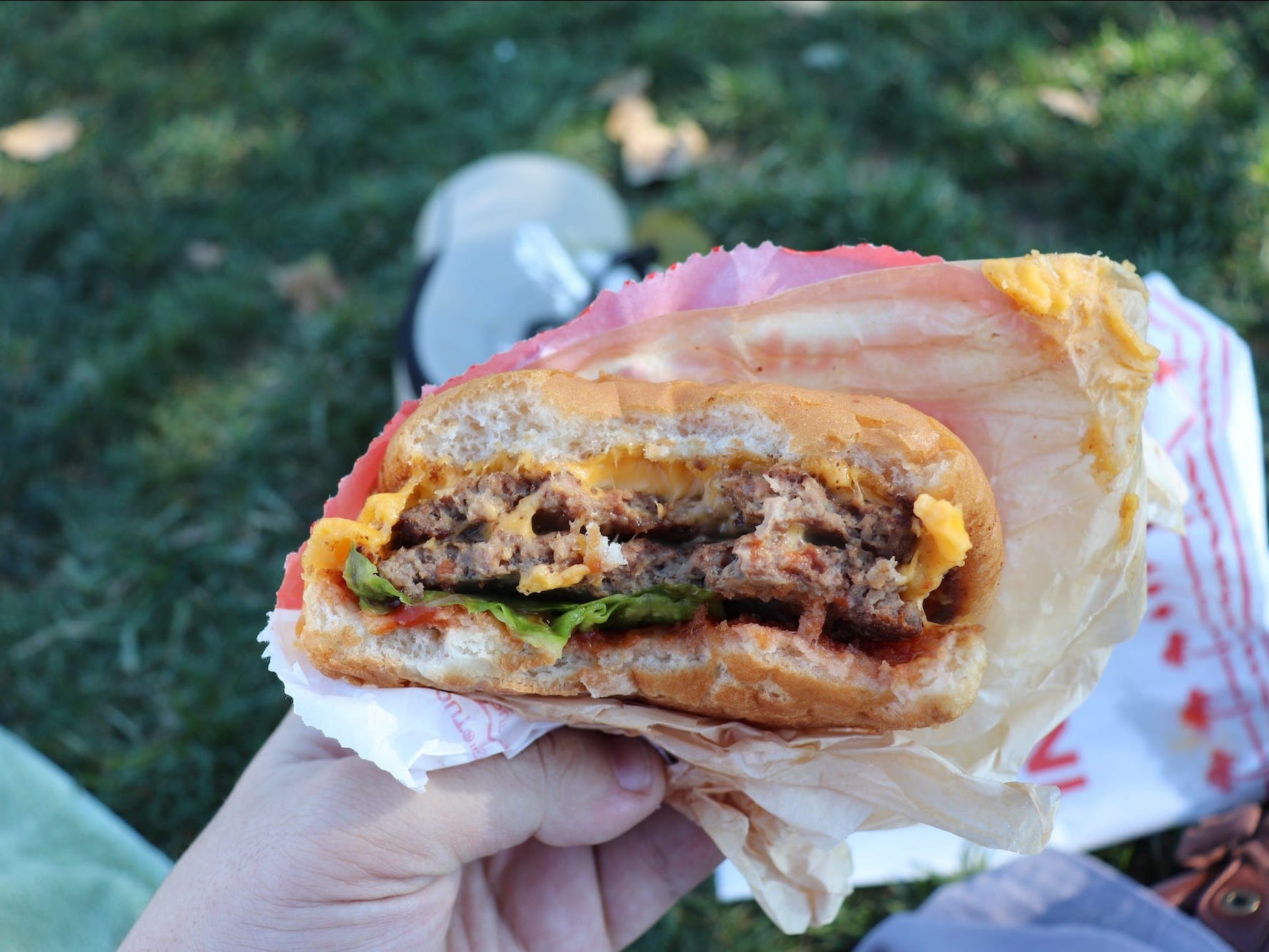 Fattier cuts of red meat can be high in saturated fats, which can lead to an increased risk of high cholesterol levels in the blood, according to the National Health Service. High cholesterol can lead to heart disease, making the specific cut of meat you choose important to maintaining a healthy lifestyle.

When you can, choose a leaner cut of red meat with a lower fat percentage, or skip red meat altogether and opt for lean white chicken or turkey that tend to contain much less saturated fat.

Frequent consumption of red meat has also been linked to developing type 2 diabetes. 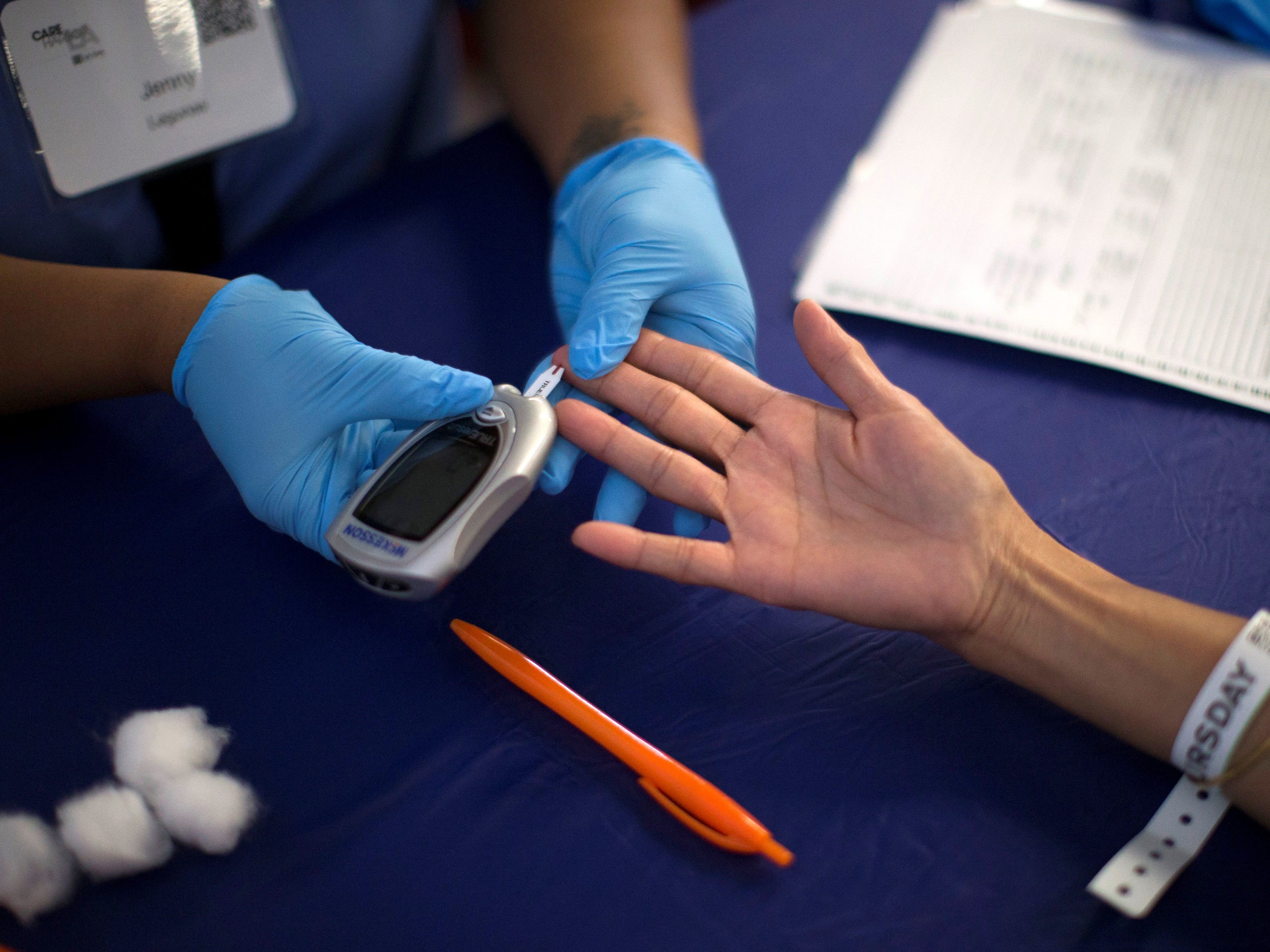 According to Healthline, several studies have indicated a link between type 2 diabetes and processed or red meat consumption.

The health resource reports that after a review of three separate studies, experts said that consuming more than half a serving of red meat daily increased the risk of developing diabetes within four years by 30%.

However, this result was attributed mainly to weight gain, which could have been affected by other factors other than simply meat consumption.

Eating too much red or processed meat can also cause uncomfortable side effects like fatigue or dehydration. 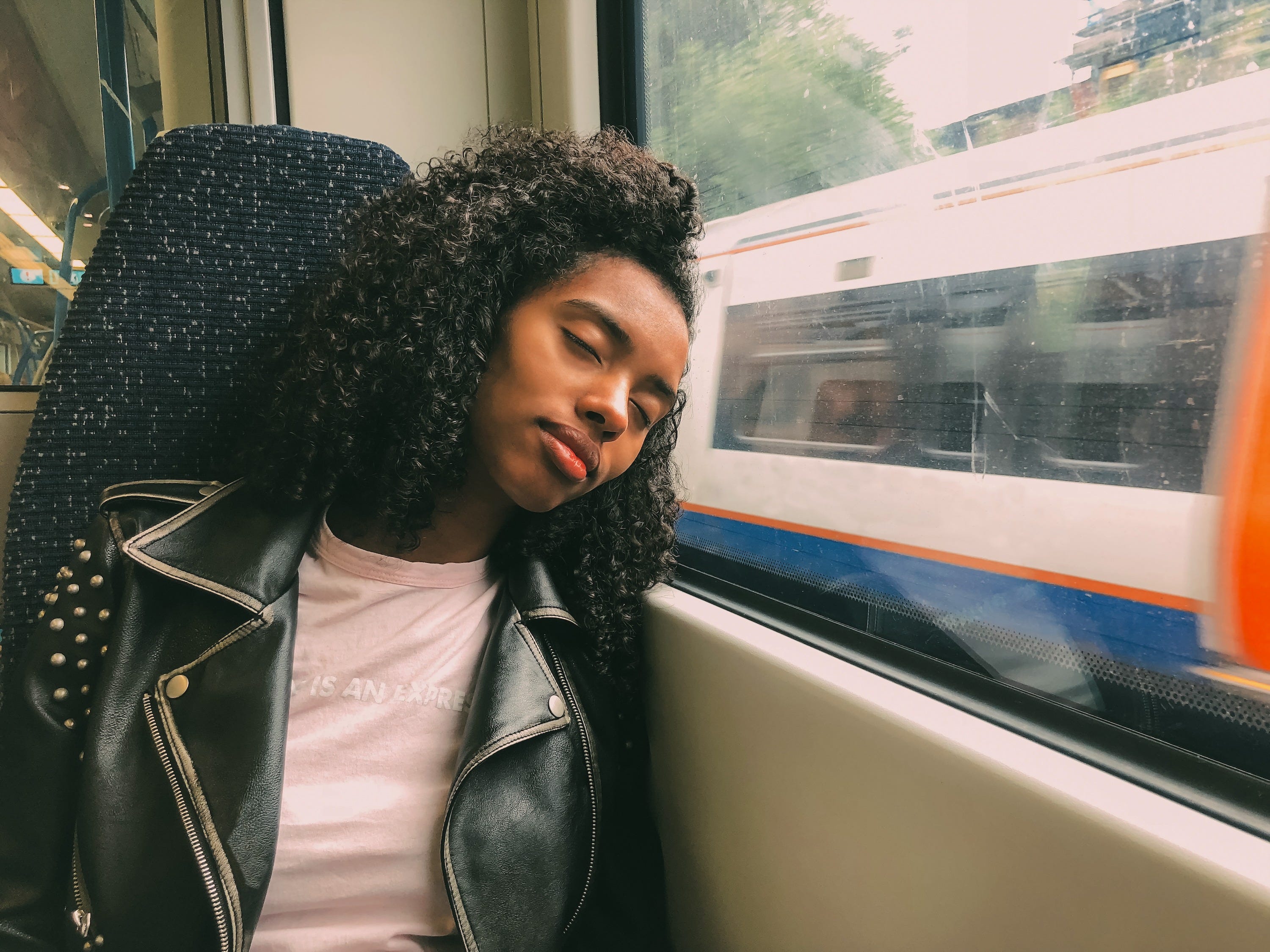 A previous article by Insider details the numerous negative side effects that people can experience from eating too much meat. Since a meat-rich diet can take a lot of your body’s water to process it through your digestive system, this can lead to dehydration.

Another negative side effect of consuming more than the recommended daily serving of meat can be fatigue. Not only does digesting a meat-heavy meal divert energy away from your brain, but some types of meat like beef and turkey are also high in tryptophan, an amino acid associated with the production of melatonin, which can cause drowsiness or regulate your sleep cycle. 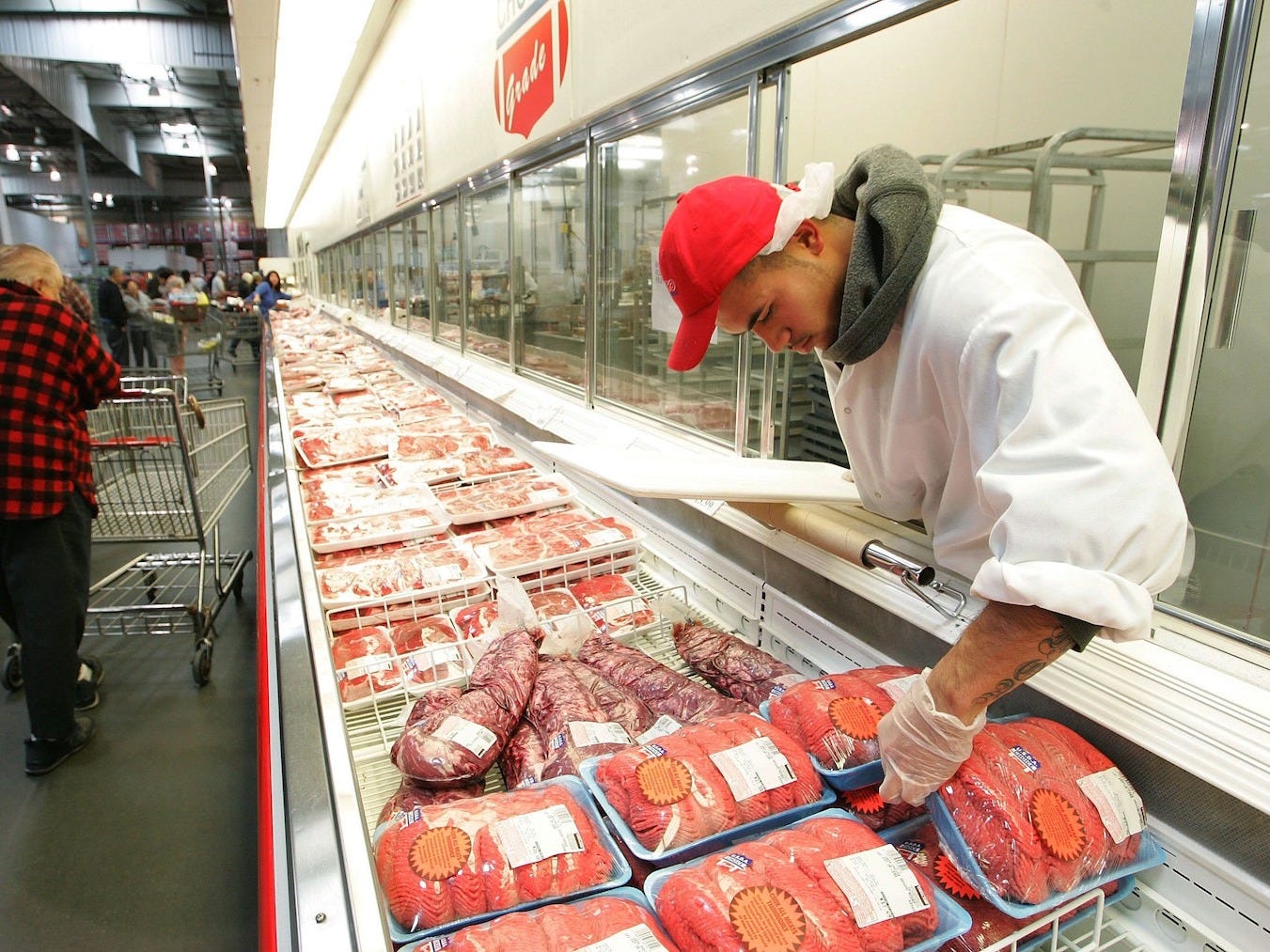 Justin Sullivan/GettyA Costco worker arranges meat in a display at a Costco Warehouse store on March, 2, 2006 in Richmond, California.

According to Healthline, several observational studies have linked high red meat intake to certain kinds of cancers, including the digestive tract, prostate, kidney, and breast cancers. A majority of these studies indicated a link, specifically, between cancer and red meat cooked at a high temperature.

Colon cancer, according to Healthline, has the strongest association with red meat intake, with dozens of studies reporting a possible connection.

According to Insider, processed meats like ham, bacon, sausage, and hot dogs are particularly prone to cause cancer as many are treated with chemical preservatives called nitrates. These preservatives have been found to be associated with a higher risk of colon, kidney, and stomach cancers.

Processed meat products have also been linked to a higher risk of heart disease. 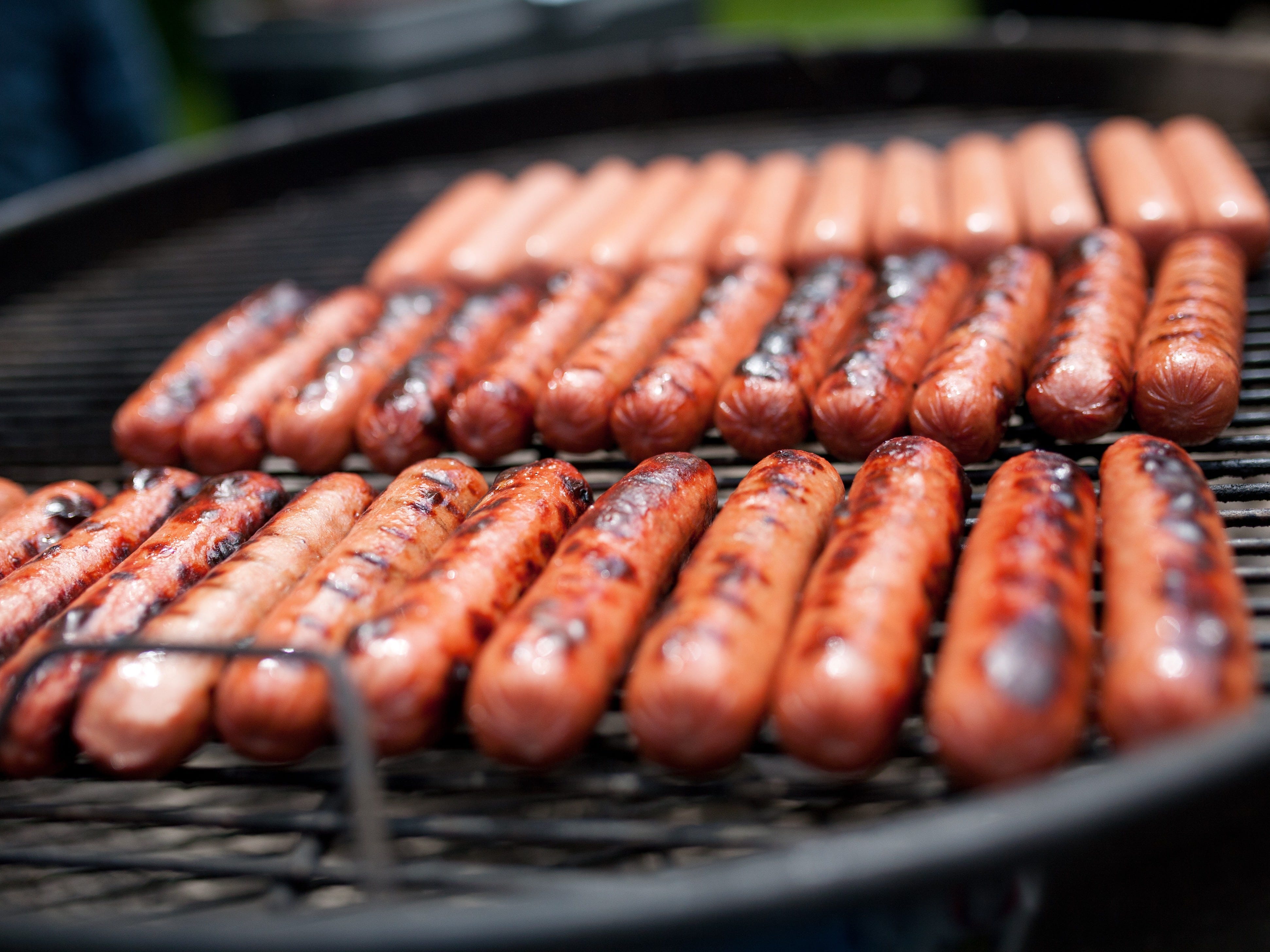 ShutterstockHot dogs on a grill.

According to a 2010 systematic review of 20 studies that looked at the link between red and processed meat consumption and the risk of incident coronary heart disease, researchers found that consuming processed – but not red – meat appeared to increase heart disease risk by 42%.

Studies have also shown that red meat has also been tied to weight gain and even obesity. 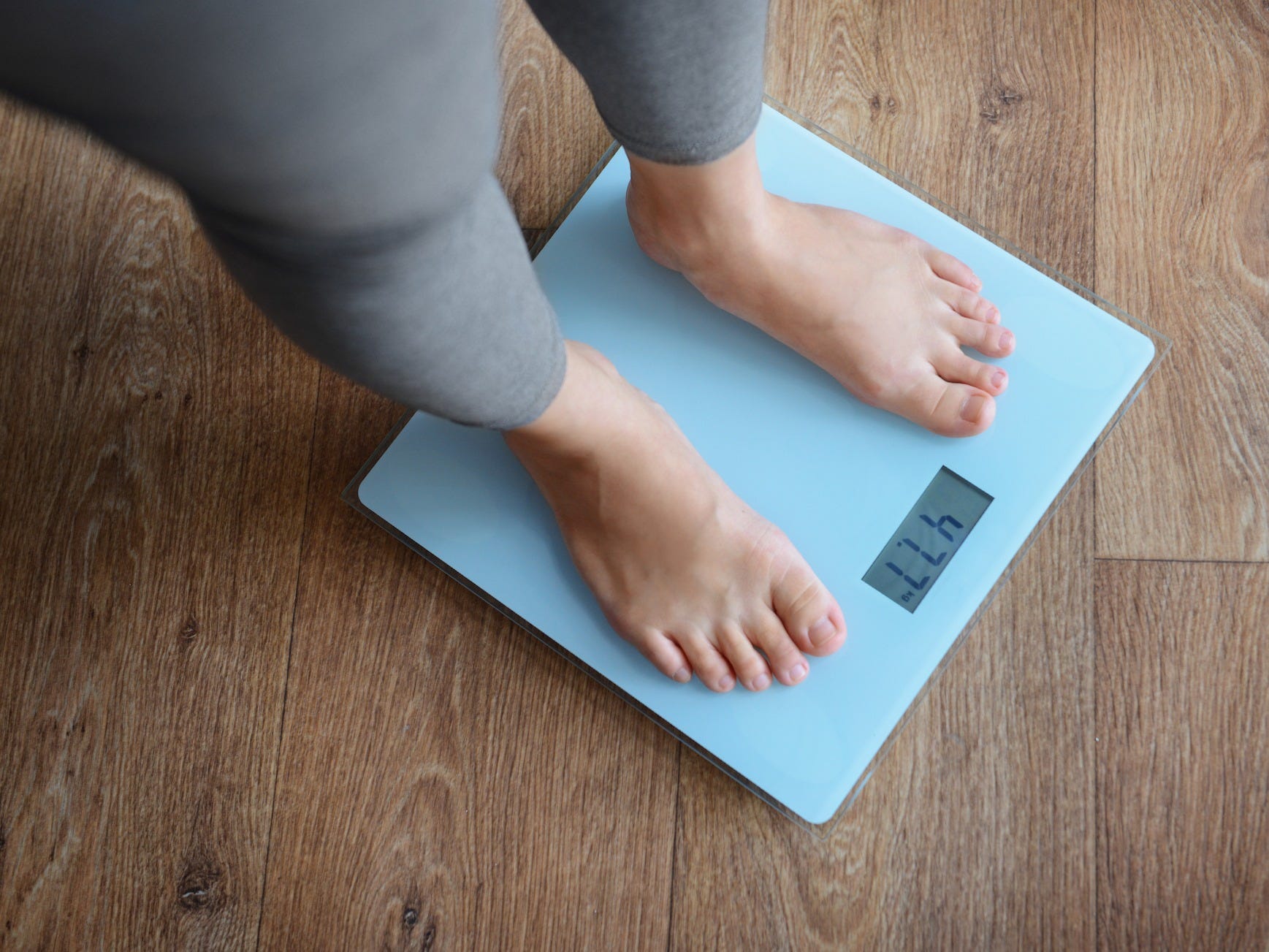 ShutterstockA person standing on a scale.

Meat consumption has a number of benefits that can lead to a healthier weight and lifestyle, including reduced appetite, higher retention of muscle mass, and increased metabolism.

However, several studies have linked higher-than-recommended intakes of red and processed meat to obesity.

Some health officials recommend eating around 3 ounces of cooked lean meat a day to maintain a healthy diet. 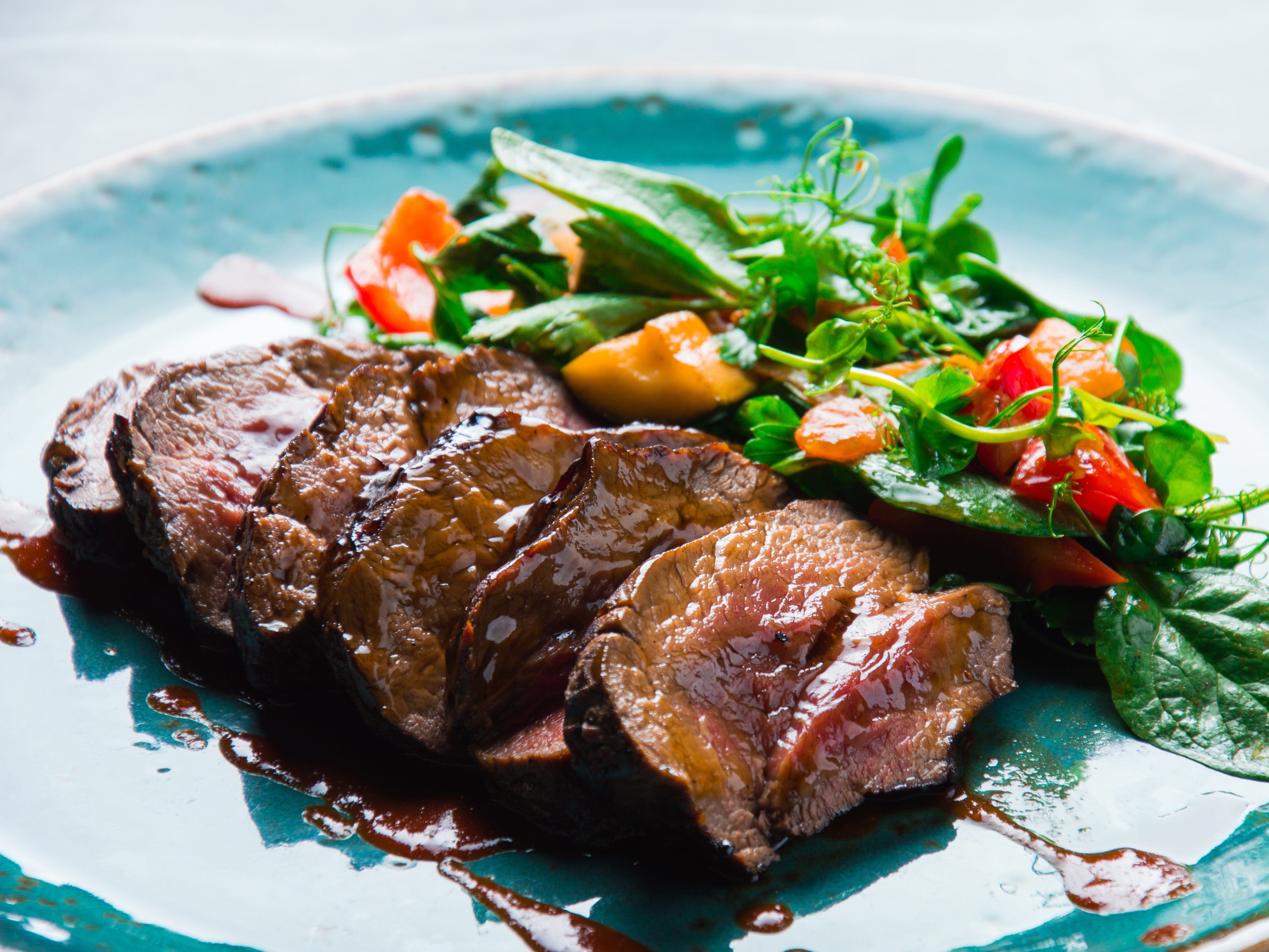 When it comes to the benefits and possible health issues associated with eating red or processed meat, it really comes down to eating these products in moderation – something that’s potentially only been made easier by the nation’s meat shortage.

“If you’re interested in eating less meat, instead think about ways you can add in more meatless meals, which is more sustainable, and a physically and mentally healthier way of approaching it,” Rachael Hartley told Insider. “Consider ways you can experiment with more bean-based meals, try eggs or dairy for vegetarian protein sources, or see if there are meat substitutes you enjoy.”

Eating the recommended daily serving size of meat – as well as limiting consumption of fatty red meats and processed meat products – can lead to a healthier, more balanced lifestyle.

However, this can vary by the person, depending on their type of lifestyle and body makeup.

“Eating more plants and fewer animals can certainly be health-promoting for many people (and for the environment!), but there’s no need to aim for a specific limit on meat or adhere to a strict label like vegetarian or vegan unless that aligns with your ethical values,” Hartley said.