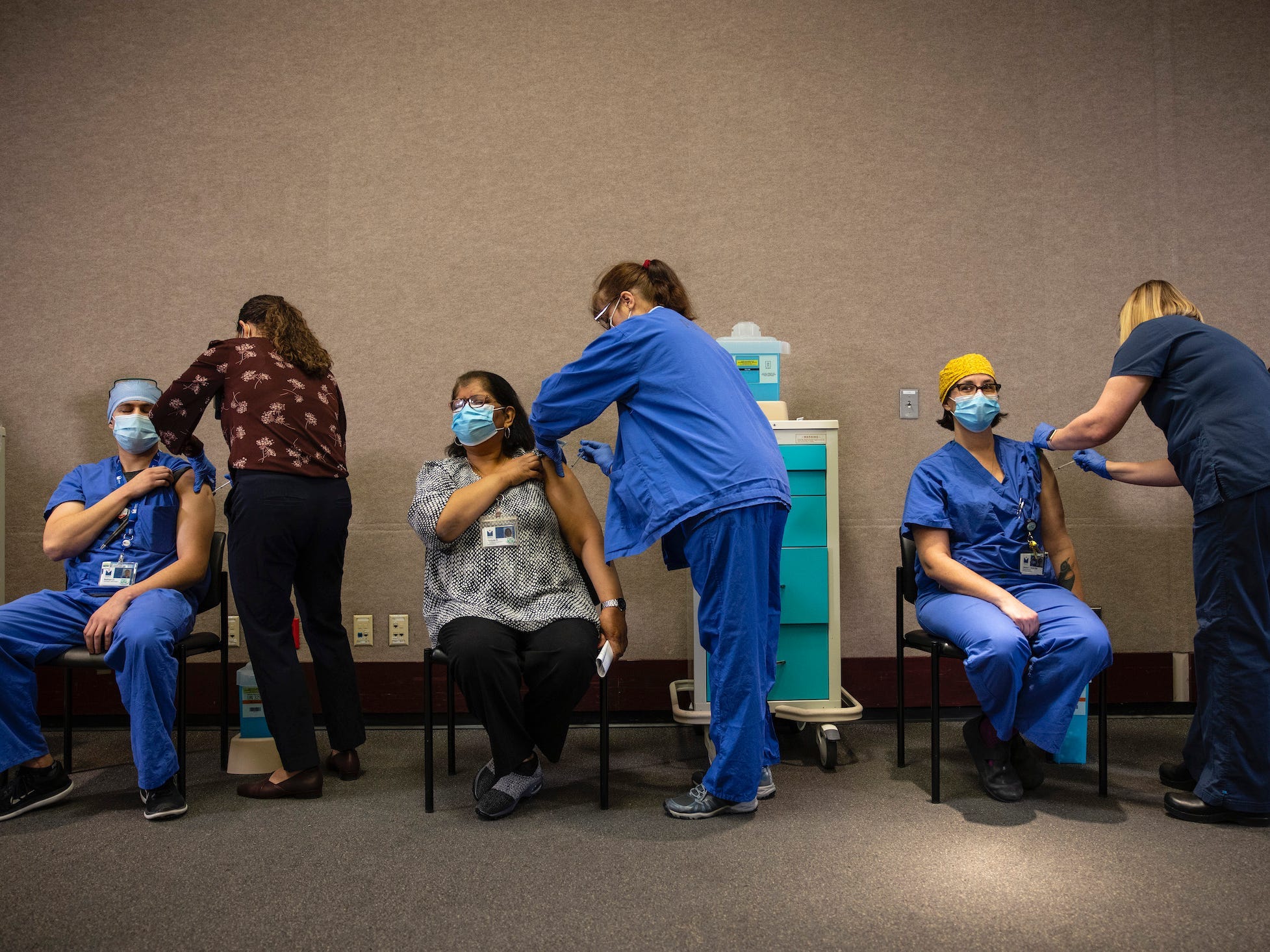 Paula Bronstein/Getty ImagesHealthcare workers get the Pfizer-BioNTech COVID-19 vaccination at the Legacy Emanuel Medical Centre on December 16, 2020 in Portland, Oregon.

On December 2, Dr. Jeffrey Gold received an email from the Massachusetts Department of Public Health asking him to enroll his primary care practice in the state’s COVID-19 vaccine program. Since then, he’s heard nothing further about the possibility of vaccinating his 700 patients.

“The reality is, this isn’t fair,” said Gold, who opened his Marblehead-based office in 2015. “It’s not just about fairness, it’s also about good medicine and public health.” Insider contacted the Massachusetts Department of Public Health for comment but didn’t hear back in time for publication.

Gold’s practice is one of many independently-owned doctors offices that don’t have access to COVID-19 vaccines and have heard little about if or when they might receive doses. Meanwhile, large healthcare providers have worked to vaccinate nearly 9 million individuals in the US, according to the Centres for Disease Control. That’s 11 million people less than the federal government’s estimate of 20 million vaccinated Americans by the end of 2020. Insider reached out to the CDC for comment but didn’t hear back in time for publication. 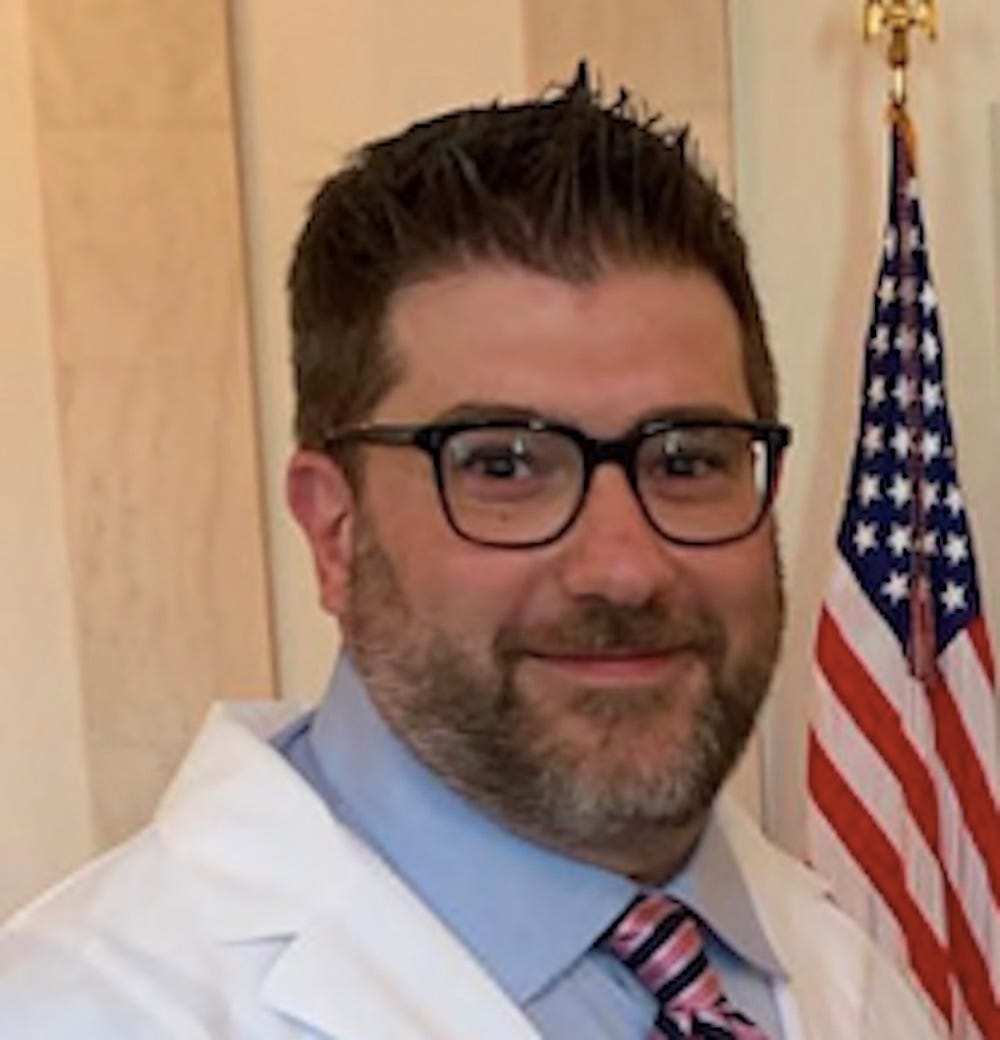 Courtesy Jeffrey GoldDr. Jeffrey Gold’s practice is one of many independently-owned doctors offices that don’t have access to COVID-19 vaccines and have heard little about if or when they might receive doses.

“Independent primary care providers have been totally left out of distribution channels and have no line of sight for when they might receive a vaccine supply for their patients,” said Dr. Emily Maxson, chief medical officer of Aledade, a company that works with independent physicians to build a network of accountable care organisations.

As of now, there are two primary channels for vaccine distribution to healthcare providers: The federal government supplies vaccines directly to some large retail pharmacies and allows states to decide how vaccines are distributed among other healthcare outlets, Maxson said.

A majority of states directed vaccines to large healthcare systems, like hospitals, leaving independent doctors offices without options for treating their patients, she added.

“You can’t just rely on people to proactively walk into a site that they don’t trust, or they’re not affiliated with, and demand the vaccine,” Maxson said.

This is not the first time during the pandemic that independent practices have been forgotten: Many were the last to receive personal protective equipment from the federal government, Maxson noted. What’s more, some employees at independent healthcare providers still haven’t received their vaccines, even though they’re frontline workers and among the first wave of eligible recipients, Polsky said.

“If this whole thing isn’t an example of why the government should get the F out of healthcare, I don’t know what is,” Gold said. “Healthcare starts in your community. A top-down approach isn’t going to fix this because they keep doing stuff like this that proves their dysfunction.”

Another factor is that your local doctor’s office likely doesn’t have the cold storage freezer necessary to keep some of the vaccines, said Dr. Emily Landon, hospital epidemiologist at the University of Chicago Department of Medicine. While it’s common for hospitals and labs to have such equipment, smaller practices don’t typically use those machines.

The exception is the Moderna vaccine, which can be stored at higher temperature than some of the others, like Pfizer-BioNtech, Maxson said.

While the vaccine includes labour-intensive reporting, Maxson says that’s not a deal-breaker for most doctor’s offices. “They’re used to figuring out how to get their patients the care that they need, so I don’t see those challenges as being hurdles,” she said.

Additionally, independent practices may not have enough staff members to organise and prepare a vaccination, Landon added. Some of the COVID-19 vaccines require multiple steps and preparation before they can be shot into a patient’s arm, making it difficult for offices with few employees.

“Most of these small business physician’s practices don’t have the staff, structure, space, or storage to set up a little vaccine clinic,” Landon said.


Read more: What to say to employees who don’t want to get the vaccine

Dr. Ryan Neuhofel said no one in his community of Lawrence, Kansas consulted with local primary care doctors about a vaccination plan. While that may slow down a mass vaccination effort, Neuhofel isn’t concerned it will hurt his business. 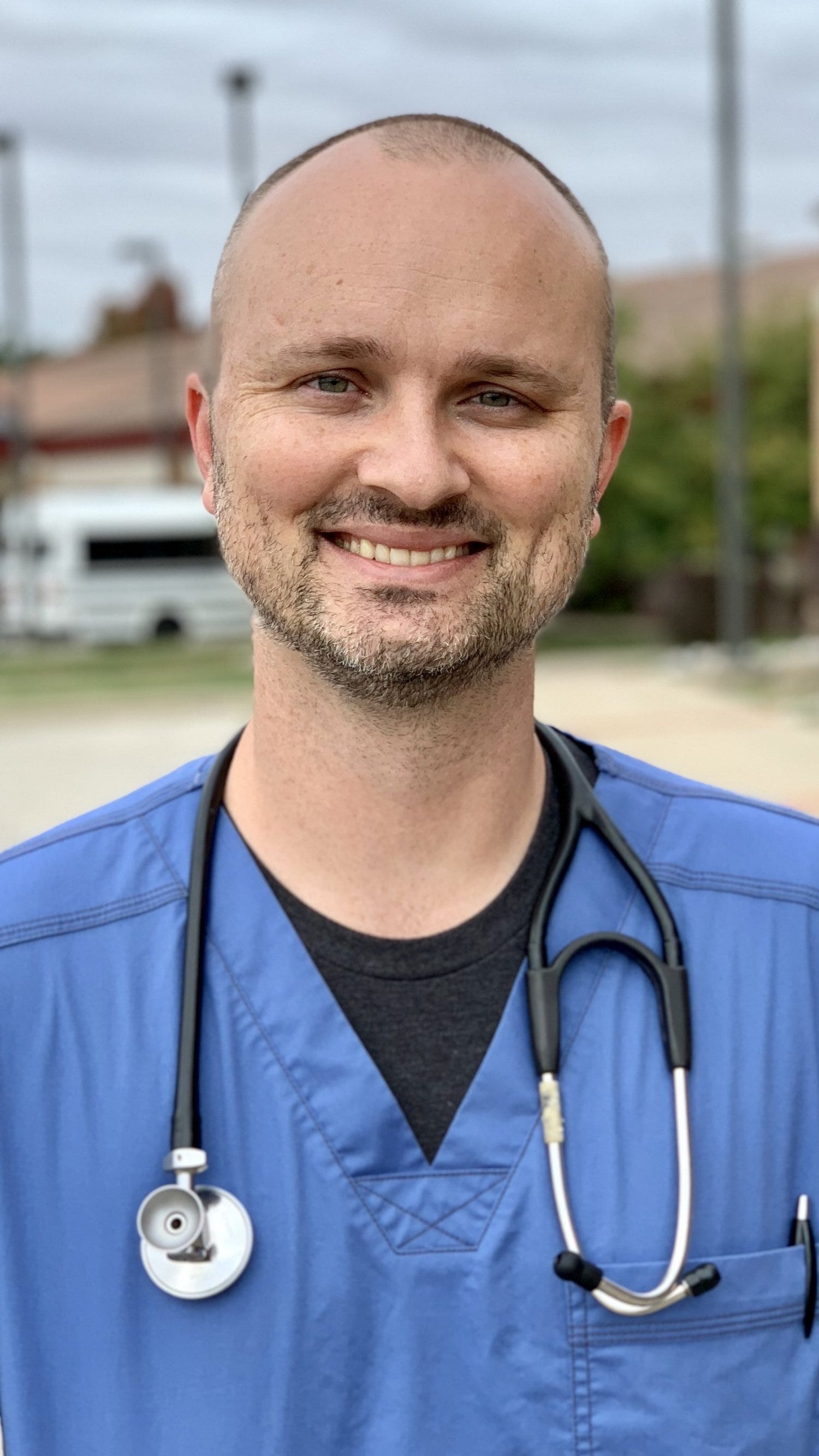 Courtesy Ryan NeuhofelDr. Ryan Neuhofel said no one in his community of Lawrence, Kansas consulted with local primary care doctors about a vaccination plan.

“I’m suspicious that the people who control the vaccine would not let someone, who might be viewed as competition, distribute or administer it because they want to look like the heroes,” said Neuhofel, who serves about 1,000 patients at his 10-year-old practice. “I think there’s a business calculation that, if you can be one of the vaccination sites, then people will view you as a better healthcare provider.”

Insider contacted the Kansas Department of Health & Environment for comment but didn’t hear back in time for publication.

Independent providers say their first priority is the health and safety of their patients rather than their financial stability. If patients can receive vaccines at local hospitals instead of doctor’s offices, physicians encourage them to seek that option.

However, doctor’s offices were not immune to the crisis and suffered like other small businesses throughout the world, Maxson said.

“Allowing access to vaccinations for independent primary care physicians not only makes sense from a population perspective but also empowers small businesses to collect the revenue they are due,” Maxson added. “It could potentially make up for the devastating toll [of the pandemic].”


Read more: Answers to your 24 most burning questions about the coronavirus vaccine, from side effects and costs to when you’ll be able to get one

But family practices can play a crucial role in process today

While many physicians don’t have access to vaccines, they can still play an important role.

Public health departments should partner with local clinicians and recruit them for vaccination efforts, Landon said. For example, physicians could close their offices one morning and instead staff a centralised, large-scale vaccination clinic in their area, she added.

“If you pool the resources and abilities of the private and small practices you might be able to get somewhere more quickly,” Landon said.

Others can try to stay informed about the vaccination process in their state and where eligible patients can get shots, said Polsky.

“It’d be nice if the mum and pops were the source of reliable information, because they’re a trusted intermediary,” he added. “The best way to communicate about the vaccines is from a trusted source and everyone has someone they trust.”


Read more: A major chain of senior living facilities will require more than 10,000 workers to get COVID-19 shots