Experts feared India's farming protests would be COVID superspreader events. Poverty, misinformation and a younger population may explain why cases plummeted instead. Imtiyaz Khan/Anadolu Agency via Getty ImagesIndian Youth Congress (IYC) workers shout slogans during a protest against the new agricultural laws, the rise of unemployment and price rise of goods and services, in New Delhi on India, on February 9

When Indian farmers began gathering to protest in November 2020, at the height of the coronavirus pandemic, experts predicted these would be superspreader events.

Three months later, tens of thousands are still gathered in tents on the outskirts of Delhi with more still arriving in tractors for speeches and impromptu marches. Big election rallies took place in October in the state of Bihar. Hundreds of thousands of pilgrims flocked to the annual religious gathering of Kumbh Mela in January, mostly without masks.

But not only have these not led to spikes in COVID cases, such cases have plummeted.

This densely-populated country of nearly 1.4 billion people, whose median age is only 28, recorded just 11,583 cases on February 10, down from a high of nearly 100,000 a day in September. 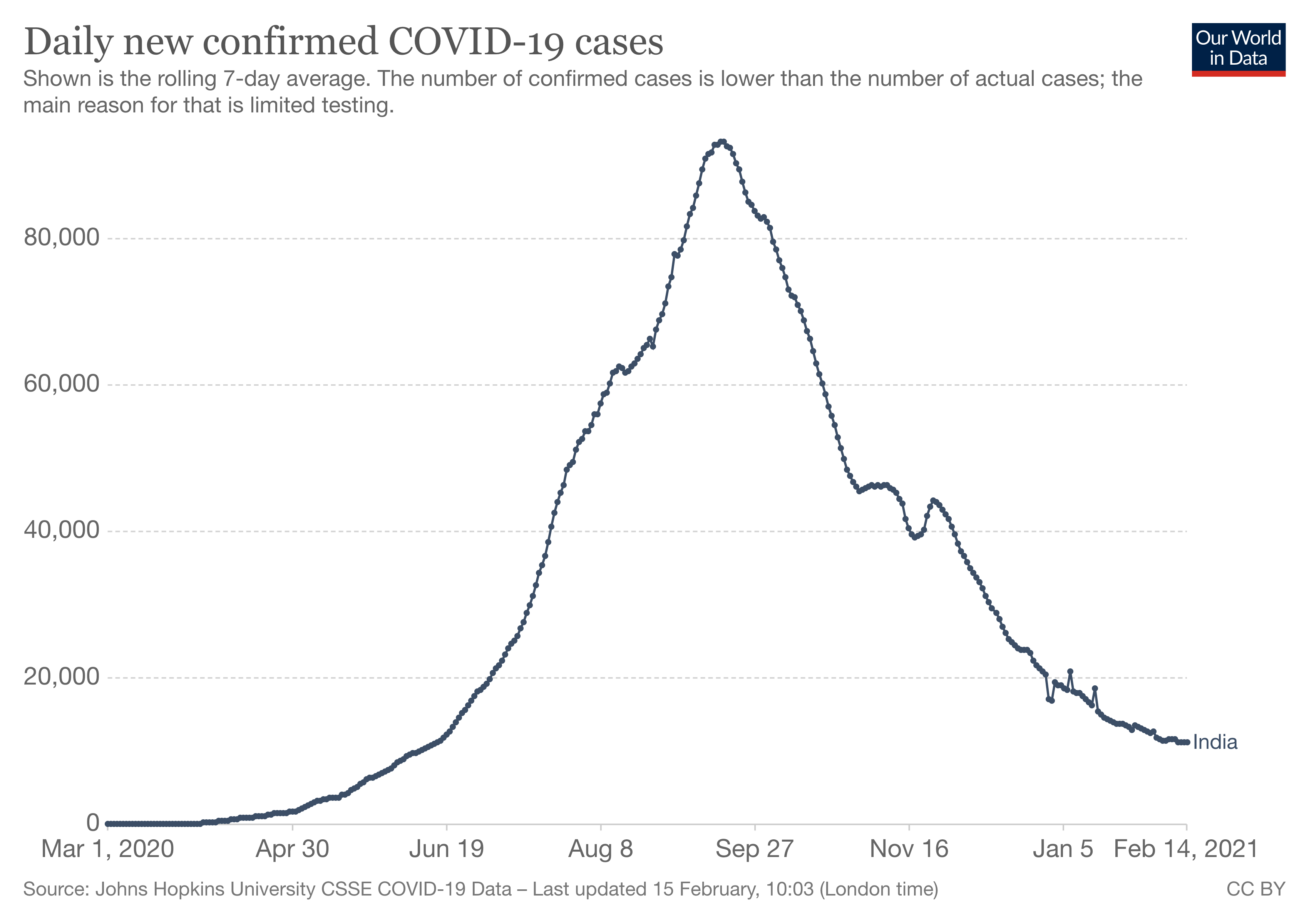 India began a full lockdown in March when cases were relatively low, then gradually emerged in stages from June. Cases began to fall long before the country embarked in January on a vaccination programme that has so far inoculated nearly 8 million people.

“None of the horrors, that were imagined, happened during these gatherings,” Dr Rajib Dasgupta, chair of the Centre of Social Medicine & Community Health at Jawaharlal Nehru University, tells Insider.

As India’s case numbers continue to decline, experts hope that the world’s second biggest country is approaching herd immunity, the “indirect protection” from infections “when a population is immune either through vaccination or immunity developed through previous infection,” according to the World Health Organisation. Xinhua/Partha Sarkar via Getty ImagesA health worker administers a dose of COVID-19 vaccine to a civil defence personnel at a private hospital in New Delhi, India, on Feb. 13, 2021

Dasgupta says mass gatherings may have accelerated this among a population that is less vulnerable to COVID, due to a relatively young population.

Misinformation about the danger of COVID may have emboldened people to gather together, he adds, saying it “might well have been an accidental game changer.”

The myths, often circulated through WhatsApp and social media, included that COVID-19 was no worse than seasonal flu and that traditional herbal concoctions or spices such as turmeric or gooseberries can safeguard against it.

Boom, an independent website that fights misinformation, published 178 fact checks of false claims circulating about COVID in the first five months in 2020.


Read more:
As little as 13% of people who get the coronavirus develop symptoms, a new study suggests 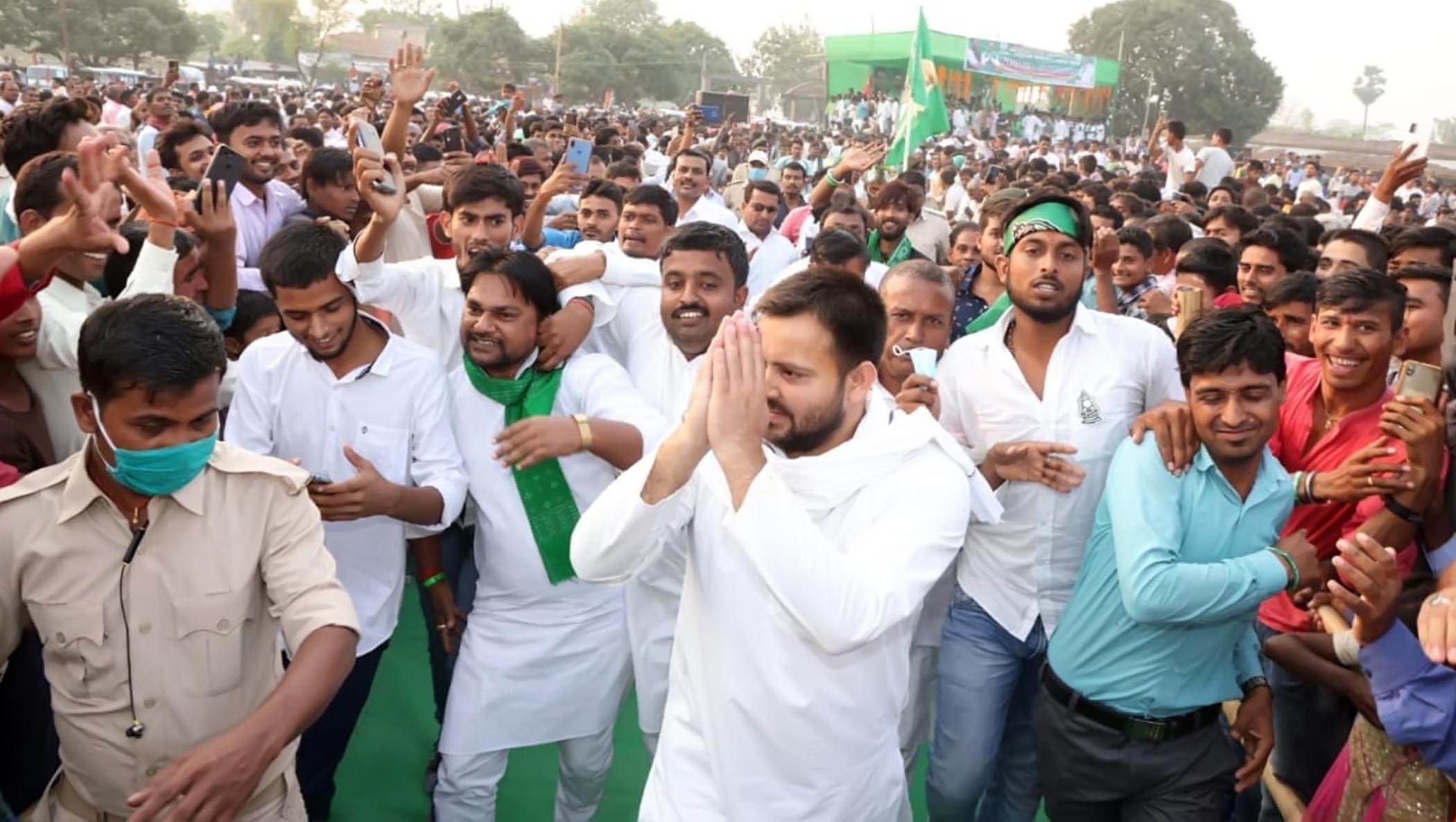 Santosh Kumar/Hindustan Times via Getty ImagesRJD leader Tejashwi Yadav gestures towards the crowd during an election rally ahead of the third phase of Bihar Assembly Elections on November 5, 2020 in Mahua, India. Rallies for the elections are among the mass gatherings that have taken place in the country amid the coronavirus pandemic

Monish Sengupta, who divides his time between Calcutta and the UK, tells Insider, a doctor friend “recommended consuming some homeopathic medicine and camphor with hot milk.”

At a tea shop in Calcutta in mid-February, Insider encountered a group of young men sipping tea and loudly arguing whether herd immunity meant they might skip taking the vaccine. “Where’s the coronavirus? It’s gone,” one of them said. On February 5, a flight between New Delhi and Calcutta was packed. Both airports were crowded.

But despite the warnings about mass gatherings, one volunteer reports seeing no one with COVID symptoms at a camp set up by doctors and volunteers at the site of the farming protests.


Read more:
Fauci said he worried about getting COVID-19 while working in the ‘superspreader’ Trump White House

Indranil Mukhopadhyay, co-convener of the Delhi chapter of health movement Jan Swasthya Abhiyaan, says there is a noticeable lack of distancing and mask wearing at the protestors as well as a reluctance to getting tested for the virus.

The professor, who teaches at New Delhi’s Jindal School of Government and Public Policy, tells Insider the camp is “fertile ground” for the virus. But he adds the group’s medical camp has so far not come across anyone displaying COVID symptoms, despite attending to more than 15,000 patients.

A working paper by the US National Bureau of Economic Research, that used data from last year’s Black Lives Matter protests, provides a potential insight into why this was the case.

It concluded that people who were least likely to contract the virus, were most likely to attend the protests in America, while those who were high-risk stayed away. 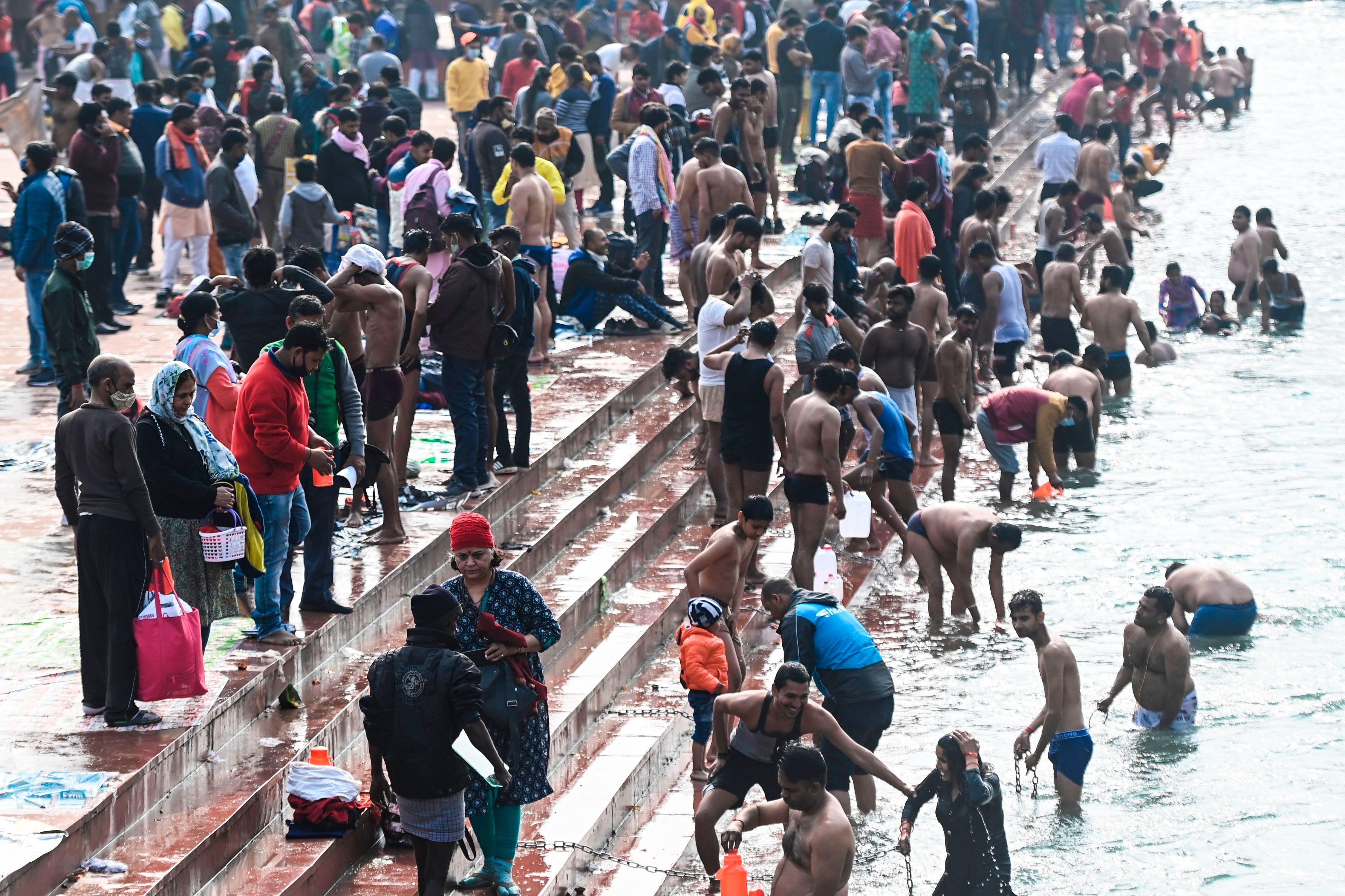 MONEY SHARMA/AFP via Getty ImagesHindu devotees take a holy dip in the waters of the River Ganges during Makar Sankranti, a day considered to be of great religious significance in the Hindu mythology, on the first day of the religious Kumbh Mela festival in Haridwar on January 14

The BLM protests also prompted those who didn’t participate in demonstrations to follow safety protocols more diligently because the protests raised the risk they perceived, the paper noted. The paper’s lead author, economics Professor Dave Dhaval, tells Insider “some of the above factors may be in play” in the farmers’ protest.

Dr Satyabrata Routray, director of immunization at the India chapter of Path, a global nonprofit health organisation, says misinformation played its part, but poverty was crucial in forcing people out of their homes.

Read more: Doctors are speaking out to dispel the ‘groundless’ myth that the COVID-19 vaccine affects fertility in women or men

More than 90 per cent of India’s workforce is in the informal sector â€” lacking social insurance and often earning a low daily wage. India also has around 1.77 million homeless people, who have no homes to lock themselves into.

“People needed to get out of their homes and get on with the business of earning their daily bread. A large majority of the Indian population are poor and depend on daily wages,” Routray tells Insider.

Dasgupta says people are asking “if the situation is real” – whether India genuinely is approaching herd immunity. “I would say it is reasonably real. The sero surveys have thrown up evidence of pretty high levels of exposure to infection,” he adds, referring to blood testing to estimate the extent of exposure.

The Indian Council of Medical Research (ICMR)’s latest sero survey showed 21.5% of Indians have been exposed to the virus. While a sero survey in Delhi – which has so far recorded 636,000 cases and 10,886 deaths – showed more than 56% of people there had developed antibodies against the virus.

Calcutta — which has more than 14 million in its wider metropolitan region – has so far recorded 571,000 cases and 10,220 deaths. Last June, much earlier in the pandemic, the ICMR had said 14% of people in Calcutta had developed antibodies, while a private laboratory in September put the figure at 50%.

I’m a NHS doctor and I’ve seen firsthand how devastating COVID is. Everyone needs have give up some freedoms to make it through the final stretch of the pandemic.

“COVID-19 is a new disease but the coronavirus is a very common virus in Asia and South Asia which means the pool of susceptible people was not as large as it was initially assumed,” Dasgupta adds.

Dasgupta agrees India is nearly at herd immunity, adding: “It’s unlikely that there will be another huge wave.” But he warns that there may yet be surges in rural areas, which so far have been less affected than cites.

“The game changer at this point would be to get more and more people vaccinated against the virus,” he adds. “To convince and communicate to the people constantly that the threat is still alive.”