Why Google's Doodles Are A Brilliant Marketing Tool

Six weeks ago, I didn’t have the most favourable opinion of Google’s homepage adjustments. Referred to as “doodles,” these logo alterations were created to add a little eye-catching fun to Google.com.

Last year, the search engine giant famously converted its logo into a fully functional game of Pac-Man. Simply put, this doodle was brilliant. But its creation came at a price. For every high-end doodle, Google flooded the site with several generic and/or less important logo upgrades. It was one thing to celebrate major holidays, the wedding of Prince William and Catherine Middleton, and the 50th anniversary of the first man in space. But in addition to these moments, Google also celebrated the 119th anniversary of the first documented ice cream sundae, the 226th Birthday of John James Audubon, and the 94th birthday of Will Eisner.

While I do not wish to discredit the accomplishments of either Mr. Audubon or Mr. Eisner (or the deliciousness of an ice cream sundae, for that matter), I do wonder: are these birthdays and anniversaries really worth celebrating?

Mr. Eisner was an impressive comic book artist. There’s no denying that. But what makes his 94th birthday any more significant than his 93rd or his 95th? Are we to assume that Google will continue creating new doodles to honour his birthday year after year? Or did the company simply decide that 2011 was the perfect time to do so, and when March 6, 2012 rolls around, the search engine will move on to something else?

A Change of Opinion

I’ll be honest – this topic has been on my mind for quite some time. Only after speaking with a couple of doodle-loving friends did I choose to delay my editorial and rethink my position on this matter. Was I being too harsh? Was the site really being overrun with doodles, as I had initially thought?

Whatever the case, today’s doodle – which honours solid-body electric guitar pioneer Les Paul – has made it clear that Google.com is better with doodles than it would be without them.

By transforming the standard Google logo into a 10-string virtual guitar, visitors can actually strum a few notes, make a recording, and share the results with the world using an auto-generated URL. It’s a simple-yet-remarkable addition to the website that instantly grabs the user’s attention.

Google’s brand power doesn’t need an upgrade. It is already one of the strongest brands in the world.

Still, the doodles have turned out to be a brilliant addition to the site. Not only do they get us to talk about Google, but they also get us to spread the Google name via social networking.

Further, they give the media an excuse to write about Google. Some websites cover every doodle Google makes, creating an endless stream of free publicity that the company can’t possibly put a price on. (Or maybe it can – Google is bound to have a budget for its doodles.)

Google has also found a way to use its doodles to inspire future generations of artists from all over the world. Every year, the Doodle 4 Google competition challenges K-12 students to redesign the homepage logo. This year’s winner, Matteo Lopez, took home a 15,000 college scholarship and a $25,000 technology grant for his school. 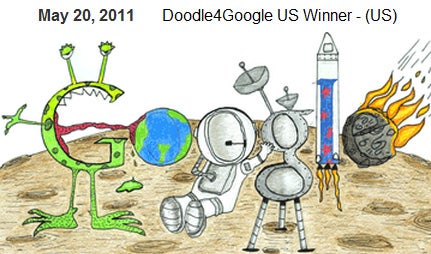 For Google, the best thing about its doodles is that they are entirely unique. No other corporation in the world has been able to transform its logo as seamlessly, as brilliantly, or as creatively. Most of the time a company can’t even suggest a logo redesign without sparking outrage (remember the Gap fiasco that occurred last fall?). But Google does it almost every week without producing a firestorm of hate mail.

Typically, Google receives the opposite.

While I have complete faith in Google’s ability to come up with any excuse to produce a new doodle, there is one major pop culture milestone that should not be missed: The Legend of Zelda’s 25th anniversary. With a new game for Wii, retro downloads for Nintendo 3DS, and a worldwide concert series scheduled to start this fall, the hype for Zelda is already greater than that of Pac-Man, which celebrated its 30th anniversary last fall.