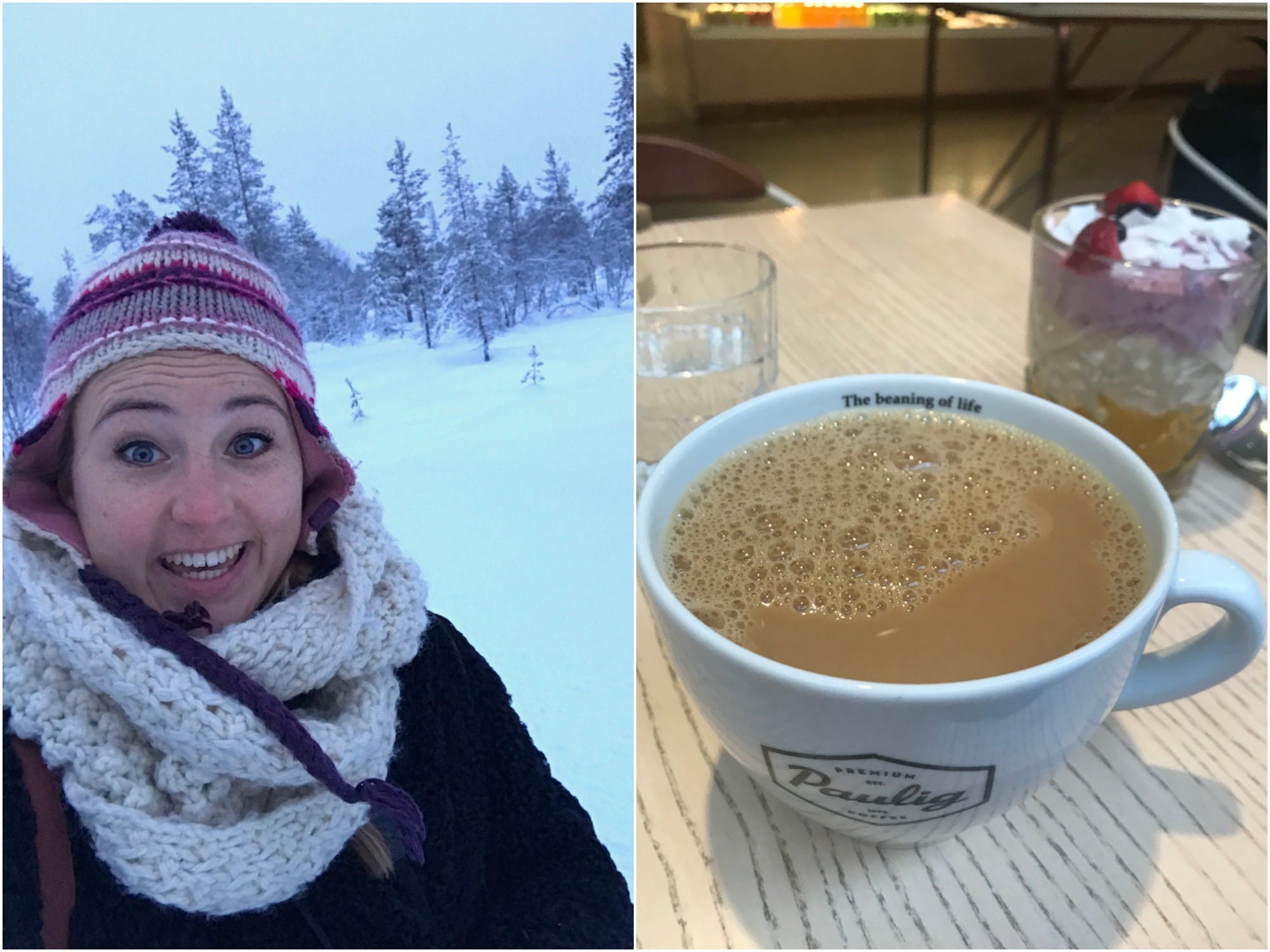 Rachel Hosie/InsiderWarming up with coffee was essential in the Finnish winter.

When thinking of Finland, many people might picture reindeer, saunas, and the Northern Lights above snowy Lapland.

One thing that isn’t widely associated with the Nordic country, however, is coffee.

But in fact, Finns consume more coffee per capita than people of any other nation, getting through 12 kilograms, or 26.45 pounds, a person each year, according to the International Coffee Organisation.

When I went to Finland back in January, I decided to try to find out what’s so great about Finnish coffee.

I quickly learned, however, that Finnish coffee isn’t all that superior compared with coffee everywhere else in the world. Exactly why the Finns consume so much is complex, but climate and culture play key roles.

Coffee is drunk at every meal in Finland, and if someone offers you some, it’s considered rude to turn it down.

Most people drink five to eight cups a day, even in the evening (and decaf is practically nonexistent).

“We drink coffee all the time everywhere,” Ella Takalainen, a barista trainer and coffee expert at Paulig Barista Institute and the Helsinki café and roastery Paulig Kulma, told Insider. 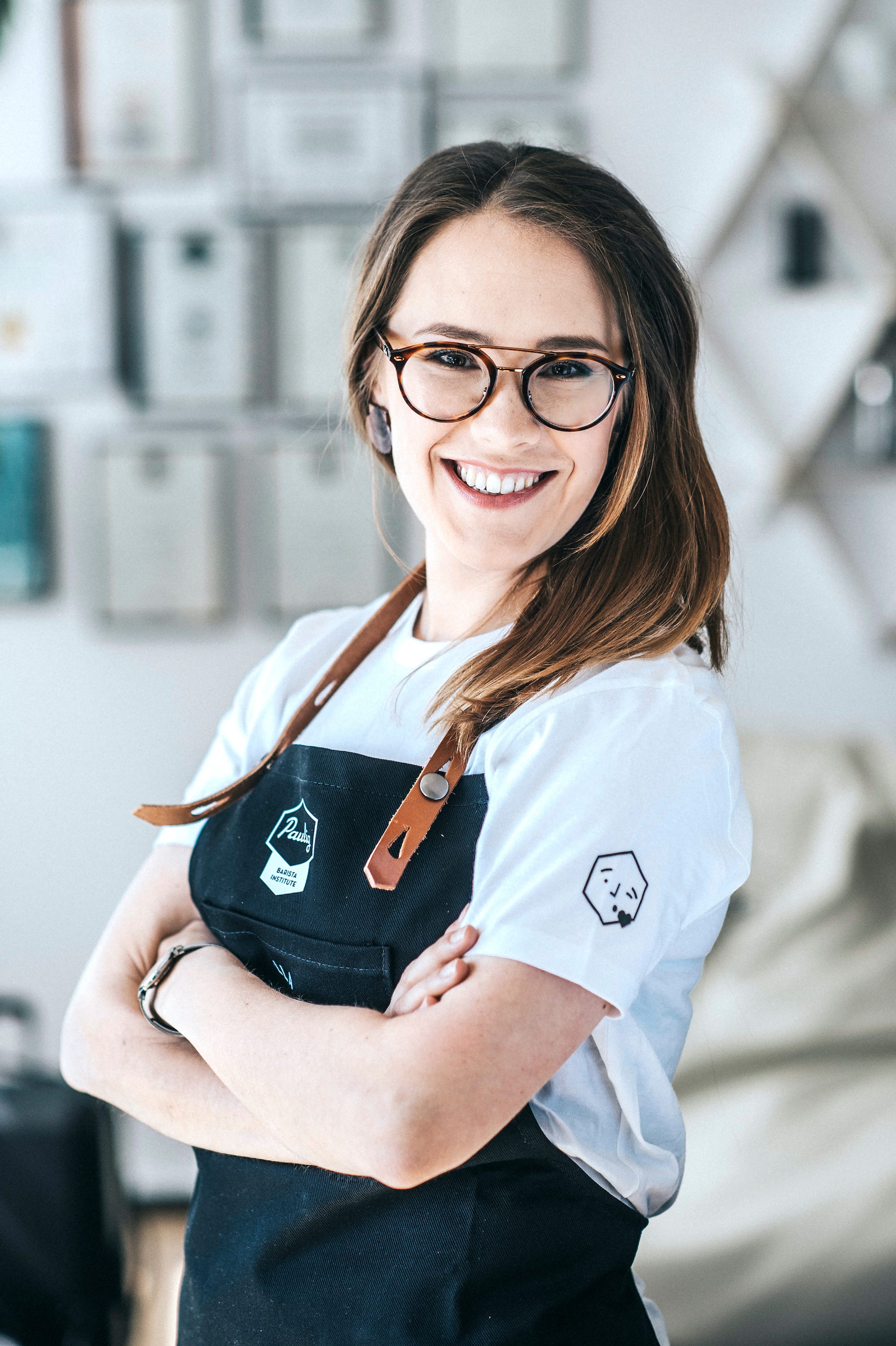 “It is considered rude if coffee is not offered when you visit someone’s home, work, or during any meeting,” she said.

“In Finnish language, we actually say ‘let’s go have coffee’ when we want to schedule a date.”

So enshrined in Finnish day-to-day life is coffee that there’s a labour agreement stating that people must take two 15-minute coffee breaks a day.

There are even different words for each situation, according to the Paulig Barista Institute, such as:

But while coffee is a big part of everyday life, it also plays a role in celebrations.

“Coffee is always served in any celebration or special occasions, and it is considered odd if there is not coffee, even at the late-evening events,” Takalainen said.

There are many theories as to why Finns consume so much coffee, and no one I asked seemed sure.

When I went to Paulig Kulma, one of the best-known coffee spots in the capital, I asked one of the baristas what she thought and was surprised by her response. 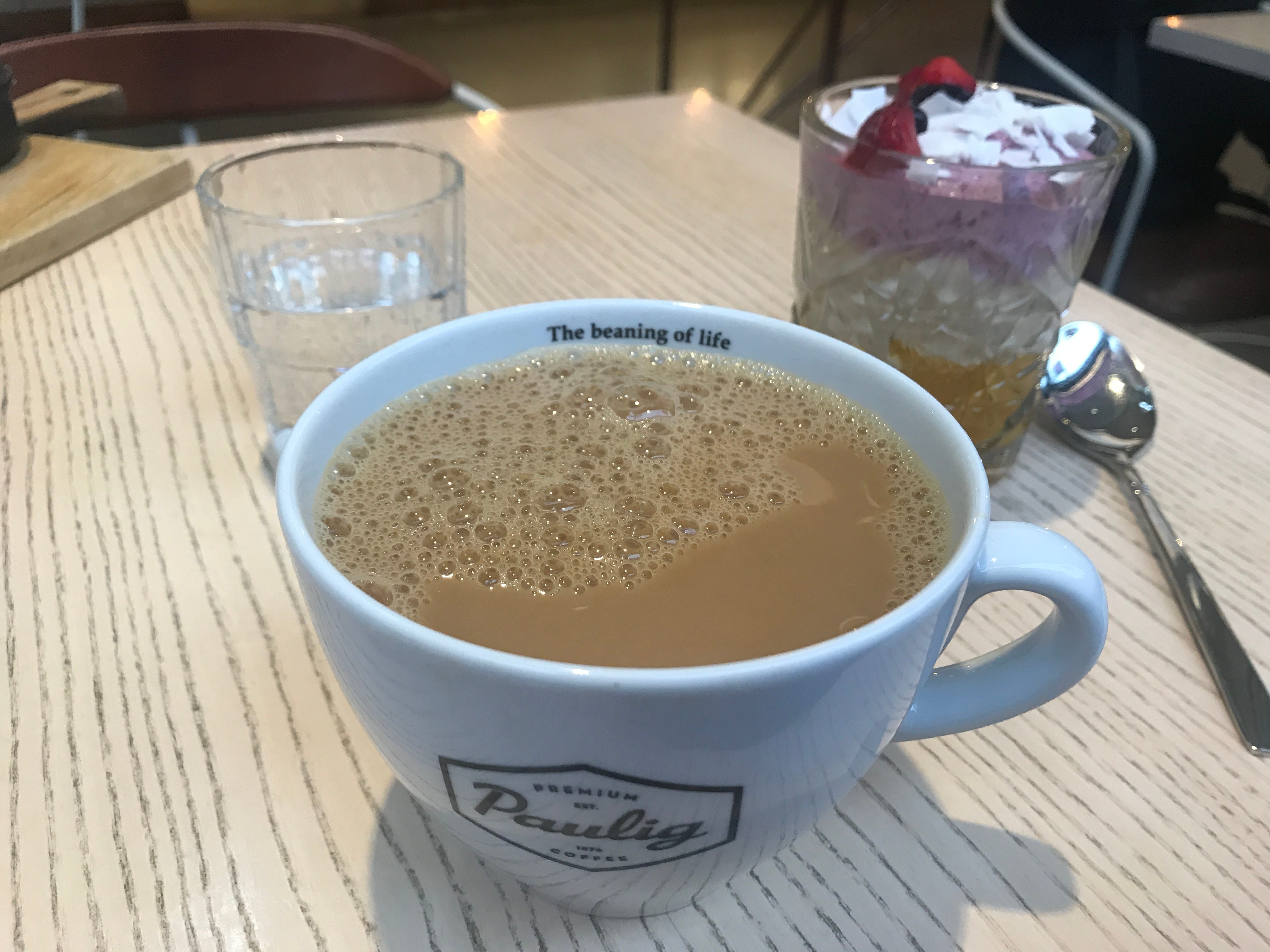 She told me it’s because it’s so dark that people need the caffeine to stay awake.

Indeed, in January, which is when I visited Finland, there are only about 3 1/2 hours between sunrise and sunset.

Takalainen seemed to confirm the theory: “Finland is located in the very extreme end of Europe, and during winter months we get to see very little sunlight, so some say we need the extra caffeine kick to survive.”

I didn’t have a bad coffee while I was in Finland, and considering temperatures were as low as 14 degrees Fahrenheit outside, it hit the spot to warm me up. 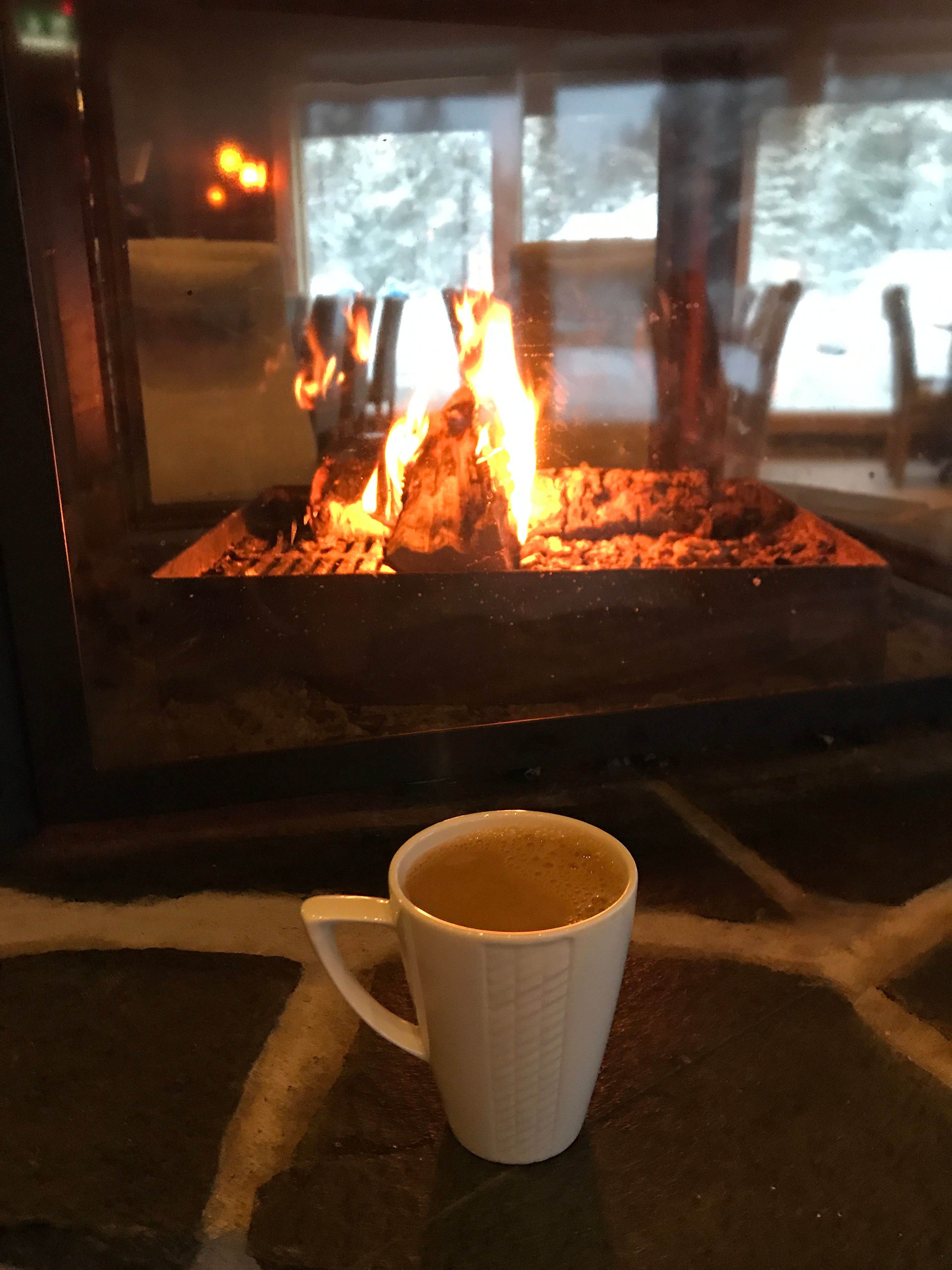 Rachel Hosie/InsiderWarming up with a filter coffee by the fire in snowy Lapland.

For me, cradling a hot cup of coffee also added to the cosy, candle-lit vibe of the Finnish winter.

Takalainen told me of another theory that goes back to the 19th century.

In 1809, Finland became an autonomous Grand Duchy of Russia, and the country didn’t gain independence until 1917.

“In the cultural revolutions, Finns felt that they would rather be a Western country instead of part of Eastern culture,” Takalainen said.

“Traditionally Russia has been big on tea drinking, so Finns choose to drink coffee instead to be affiliated to the West.”

In Finland, it’s normal to drink lightly roasted filter coffee – espresso or milky drinks are generally considered fancy or special, according to Takalainen, and they only appeared on the scene in the 1990s. Rachel Hosie/InsiderMore than 20 coffees are on the menu at Paulig Kulma.

Many of the cafés I visited had huge vats of self-serve filter coffee on offer, which is a really cheap way to drink it too.

In Paulig Kulma, for example, there were two filter options (one from Kenya, the other Spain), and the café had more than 20 coffee drinks on the menu in total. 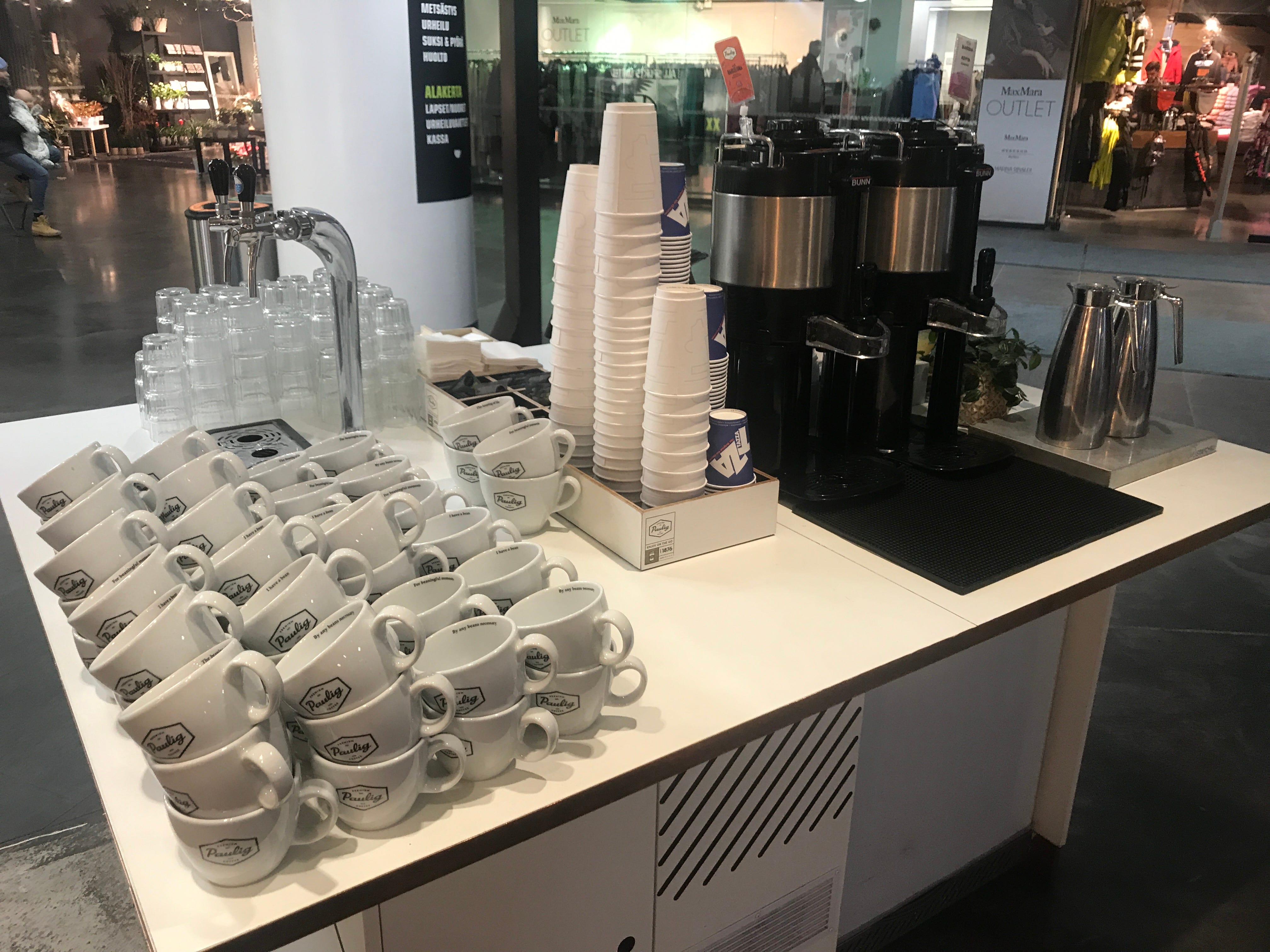 “In Finland, the tap water is great quality and drinkable everywhere. It is also extremely soft, meaning that we can make our coffee lighter and still brew it to taste great.

“In countries with harder water, the coffee needs to be roasted darker to have decent flavour.”

The focus is on quality and sustainability

Drinking sustainable coffee is a priority for many Finns.

“This drives the coffee roasteries to be very transparent about the sourcing, ingredients, and ways of working,” Takalainen said.

“Bringing great-quality coffee to the shelves and ensuring the consumers that the coffee tastes good but is also guilt-free.” 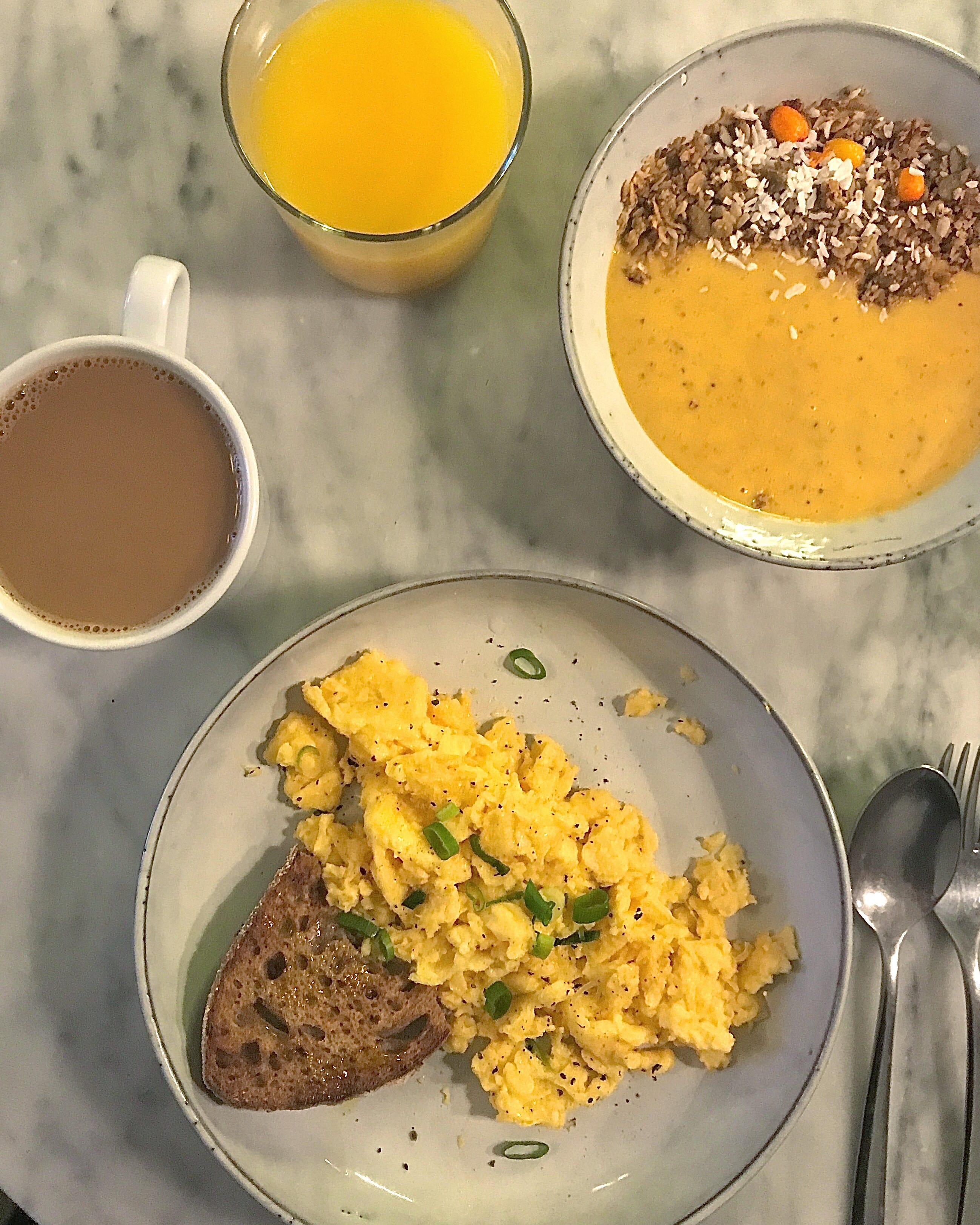 Rachel Hosie/InsiderBrunch with filter coffee at the Green Hippo Café in Helsinki.

Interestingly, in Finland I didn’t see any of the big global coffee brands you see in most European cities, but there were lots of independent cafés and Finnish chains.

As Finland has been considered the happiest nation in the world for multiple years running, could it be that the key to happiness is simply drinking lots of coffee?

I’m a white-Americano or filter-coffee kind of girl, so the Finnish coffee culture suited me well and certainly made me happy – but as a Brit, I’m not sure it could ever replace tea.