Why are the protests so much more intense?

.
To view this newsletter on our site, click here. 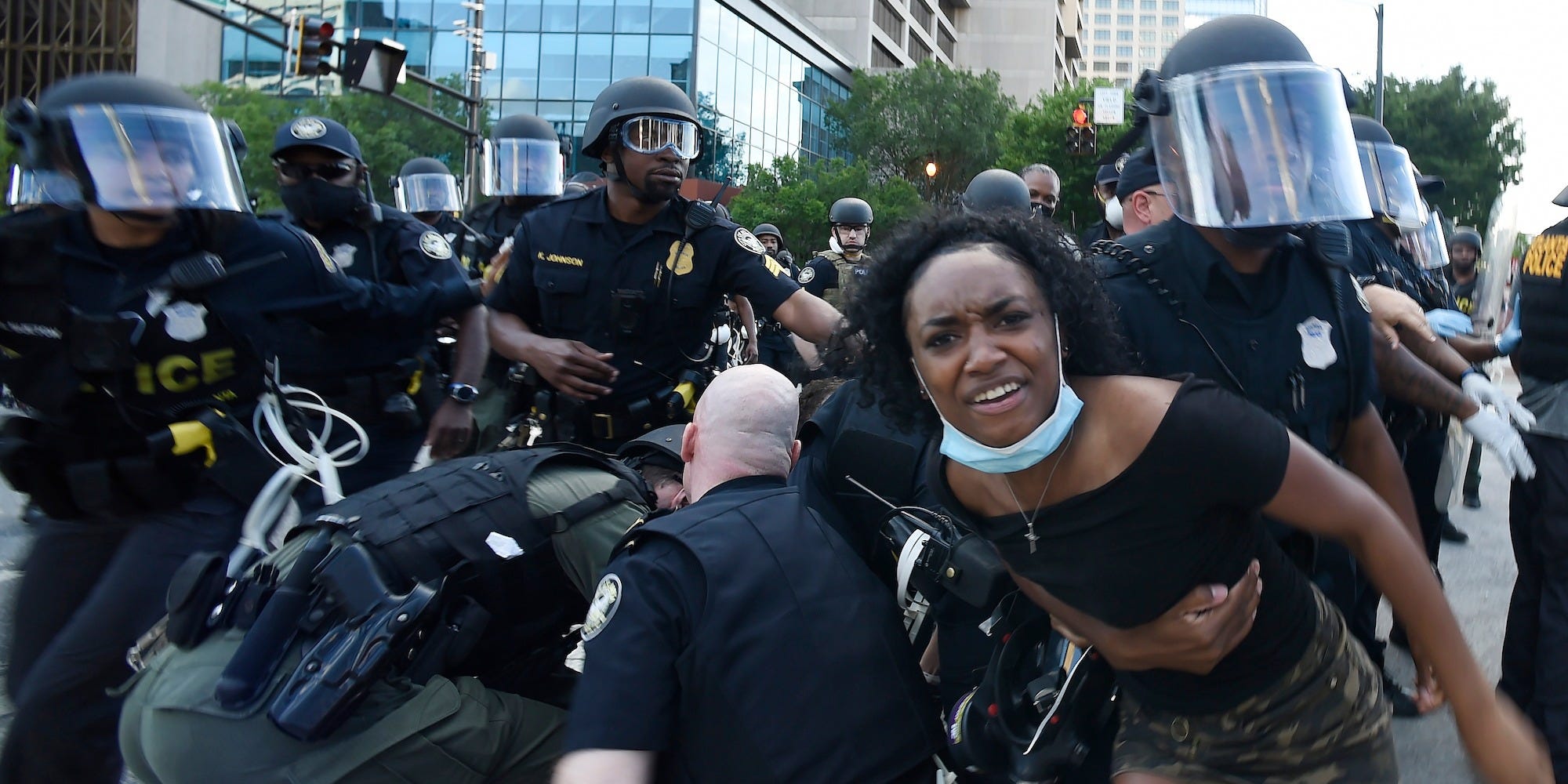 Associated Press/Mike StewartAtlanta police detain demonstrators on May 30, 2020, in Atlanta.

Why now? Why everywhere? And why so much more intense?

The peaceful protests over George Floyd’s death have spread with amazing speed, as has the violence. Police have escalated tense encounters by meeting mild resistance with rubber bullets, pepper spray, and tear gas. Chaos agents among the protesters are setting fires, breaking windows, spraying graffiti, and looting.

Why are these protests so much more intense than protests after earlier episodes of police brutality?

Here are nine reasons, starting with the most important.

What can be done to reduce the kind of police violence that killed George Floyd? A lot. 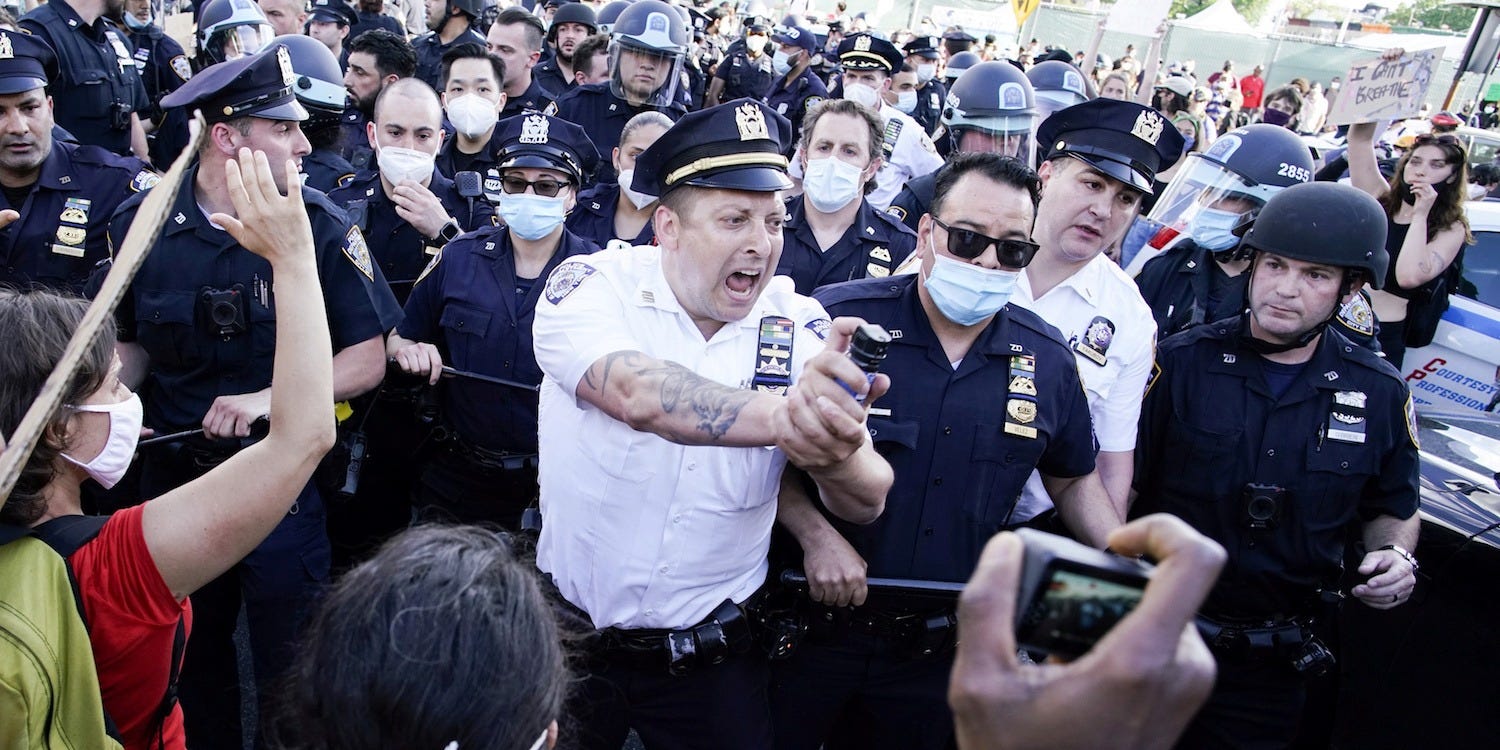 REUTERS/Eduardo MunozAn NYPD officer sprays protesters as they clash during a march in Brooklyn on May 30.

Police violence isn’t necessary and it isn’t inevitable. Plenty of countries have none of it, and there are lots of practical ways to reduce it.

Here, for example, is a great twitter 2019 thread from Samuel Sinyangwe, one of the founders of the anti-police-violence group Campaign Zero, about effective methods for cutting police violence.

Among the most useful measures, he says, are demilitarization, more restrictive state and local policies about use of force, union contracts that don’t shield violent cops, and diverting calls about mentally ill people away from 911. (Not effective: body cams and implicit-bias training.)

Sinyangwe has another thread from this weekend listing recent local and state legislation (some passed) to reduce police violence, including laws banning choke holds, requiring drug/alcohol testing for officers who shoot suspects, barring the hiring of officers previously fired for using excessive force, and a lot more. Former Democratic presidential candidate Julian Castro similarly has proposed a national database of decertified police officers, which would keep bad apples from moving around.

Libertarians also have plenty of compelling ideas for restraining police violence. Rep. Justin Amash announced last night that he’s introducing a bill to end “qualified immunity” for police officers, a protection that essentially prevents them from ever being held liable in a lawsuit for anything they do on the job, even something heinous.-DP

The moment the protests began, some Americans – including President Trump – started blaming them on “Antifa.”

There’s no actual organisation called “Antifa.” But the term “Antifa” is used to describe some left-wing groups and individuals who believe they are justified in using violence to advance their causes and regard those who disagree as part of the problem. Antifa, in other words, is a collection of extreme left “militia”-style advocacy groups, similar to such groups on the extreme right.

We do not support “Antifa.” We are against using violence to advance causes. We believe violence should always be a last resort.

But we are certainly anti-fascism.

And we would like to hear our president make clear that he, too, is anti-fascism. Because sometimes these days, it’s hard to tell.

Well, it’s being against authoritarianism, and the hyper-nationalist, domineering government behaviour that often goes with it.

Also, because we would rather be for things than against things, here are some of the things that we are for:

We are for democracy.

We are for the rule of law.

We are for respect.

We are for dignity.

We are for civility.

We are for diversity.

We are for fairness.

We are for truth.

We are for humanity.

We are for the environment.

We are for science.

We are for tolerance.

We are for freedom.

We are for a better future.

We are for America as it aspires to be and can be.

That’s anti-fascism. That’s what we’re for.

Facebook’s hands-off stance on political speech has often frustrated observers, including some who work for the company. Now, with Twitter having finally taken steps to rein in the president while Facebook CEO Mark Zuckerberg has reaffirmed his commitment not to do so, some Facebook employees are speaking out.

“I’m a FB employee that completely disagrees with Mark’s decision to do nothing about Trump’s recent posts, which clearly incite violence. I’m not alone inside of FB. There isn’t a neutral position on racism.”

Zuckerberg is in a tough place here. He’s trying to have his cake and eat it, too. He’s trying to create a neutral platform in which anyone can share anything while also being a force for good in the world. And he is learning that it is sometimes impossible to be both at the same time.

The goals of “free speech,” political neutrality, and civil discourse, after all, often collide with one another.

Facebook desperately wants to avoid being viewed as a “publisher,” an organisation that makes decisions about what is and isn’t appropriate and OK as a core part of its mission and business. But as the ever-increasing scrutiny is making clear, from within and without, that’s what Facebook is.

Facebook long ago began doing its duty as a publisher on the easier end of the spectrum – banning pornography, violence, weapons and drug sales, and other forms of speech.

Now it is going to have to make harder decisions. -HB

One strategist believes the ongoing stock rally is setting up a “classic bear-market trap.”

Many observers have been mystified by the market’s behaviour since mid-March. Despite a crippling blow to the economy, 40 million unemployment claims, the near shutdown of major industries, and increasing civil unrest, stocks have recovered almost all their losses.

The bulls believe the market is just looking forward from the current carnage to the recovery, which they believe will be stronger than many people think. They point to the massive emergency measures that the Federal Reserve and Congress have thrown at the crisis, which have helped cushion the blow and reduce the worst-case scenario risks. And they believe that, although things are terrible now, the news will get better from here.

One of Wall Street’s top strategists, however, thinks this optimism is just delusion. David Rosenberg, of Rosenberg Research, says investors are falling into a “classic bear market trap.”

Most bear markets, Rosenberg observes, go through distinct phases. There’s the sharp, initial plunge, which scares the bejesus out of everyone, and triggers panic selling. Then there’s a strong recovery in the face of this fear, which deludes people into thinking the worst is over and a new bull market has begun. And then there’s a long, brutal decline that lasts for a year or more and takes the market far below the depths of the initial plunge. 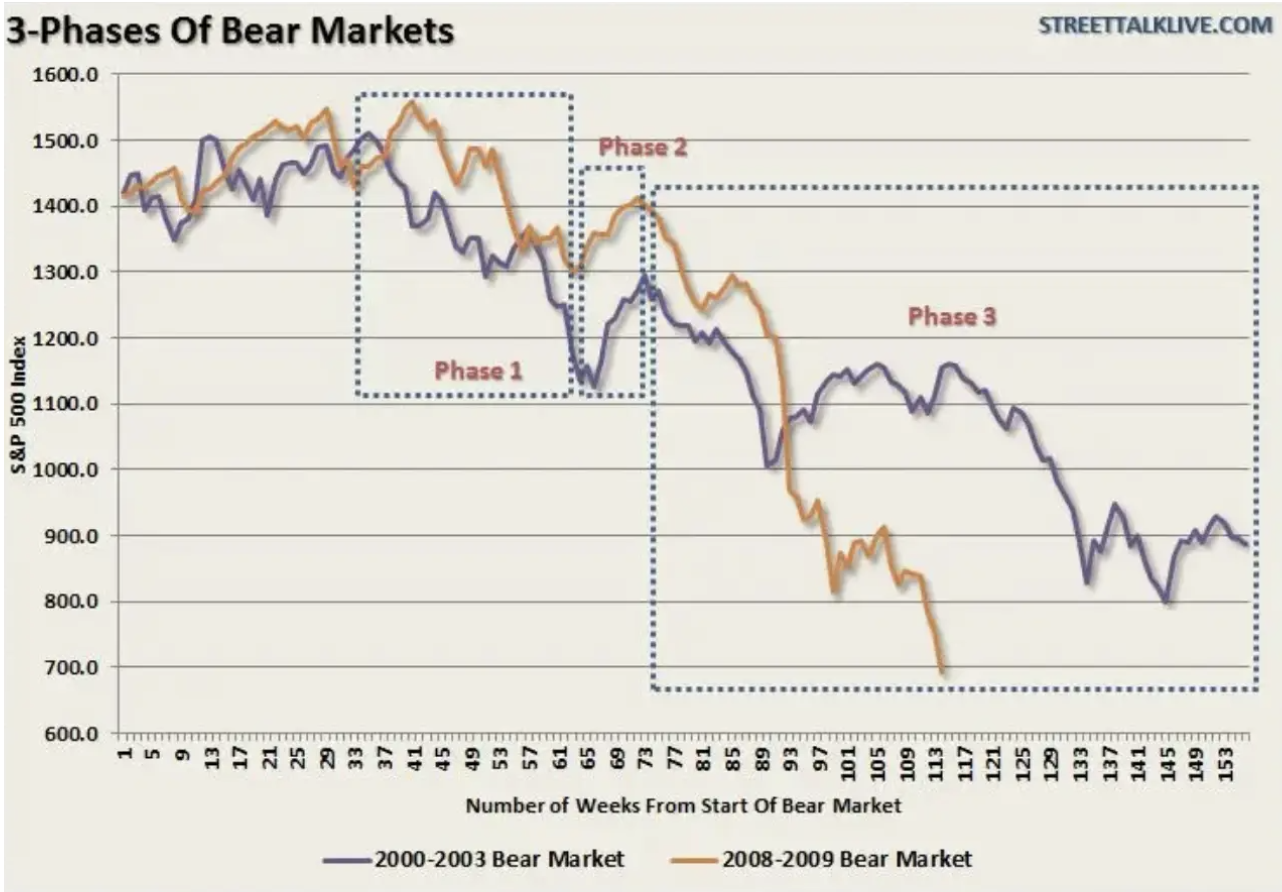 Rosenberg believes we’re in the second phase – a “bear-market rally” that is calming fears and deluding people into thinking that the storm is over before resuming a more painful decline.

Having worked as a professional analyst and journalist during two of the bear markets Rosenberg describes (2000 to 2002 and 2008 to 2009) – and having studied the “Great Crash of 1929” – I can confirm that these patterns are real.

By September 2000, for example, in the early months of the “dot-com bust,” the Nasdaq had recovered most of the gut-wrenching losses it had suffered that spring, and most of the “smart money” (including, unfortunately, me) believed that the worst was over. But then stocks rolled over again and began a more sustained, devastating, and demoralising decline. Two years later, the Nasdaq finally bottomed down more than 80% from its peak.

The same thing happened in 1929. By the spring of 1930, the market had recovered much of the ground it had lost on “Black Monday” and other dark days the prior fall, and some investors thought stocks were off to the races again. Then the crash resumed, and the economy headed into the Great Depression. Two years later, in 1932, the major index closed down more than 80% from the top.

I will also note, however, that moments of greatest fear and scepticism are often the best buying opportunities. Back in mid-March, for example, the market was plummeting hundreds of points a day, and it seemed like the world was ending. Since then, though, the economy and pandemic, despite being horrific, have not suffered the worst-case scenarios that some investors envisioned, and investors who bought in March have been rewarded. If the economy continues to recover, and we have some medical breakthroughs or good luck and do not experience a major “second wave” of the pandemic, the market could well climb the “wall of worry” back to new highs.

So, in other words, as always with the stock market, there are smart investors and persuasive logic on both sides.

How should a normal person invest in the face of this uncertainty?

The answer is different for each of us and depends on our individual risk tolerance and time horizon. No one knows the future, so we should build our portfolio so that we will be and feel OK no matter what happens.

For most of us – including me – that means diversification. Enough “safe” investments (cash) that if stocks drop 50% to 80% over the next 18 months, I won’t panic at the “loss of my retirement” and sell. Enough “growth” investments (stocks) that if the market continues to rise, I’ll offset the inexorable bleed of inflation and earn an acceptable rate of return. -HB

On our essay about the tragedies of Minneapolis …

With respect, and as a white woman, I think you could have done a better job with this. I understand you tried to address the injustice that sparked the violence and very much appreciate that you called out the difference in treatment between white and black protesters, but I think you could have done a lot more to underscore the hurt, anger, and injustice that the black community is rightfully feeling. I think it is your duty, with what I assume is your mostly white audience, to address this more strongly. To me, it seems like you understand but are afraid to do more than dip your toe in that water.

Such a tragedy … but really, are you surprised? Look at the photo. We see a wall of white faces in dark glasses and uniforms. No diversity, no understanding of standing in another man’s shoes.

I fear for your country.

Insider Today’s goal is to provide you with insight and analysis about the big stories of the day – “Insider in your inbox.”

Please feel free to reply to this email and tell us what you like or don’t like, and we’ll evolve and improve as we go. And if you’re enjoying the newsletter, please forward to your friends.

Please also let us know your thoughts on the topics we discuss. Please include your name and city/state/country. If we think other readers will enjoy your note, we’ll publish it!