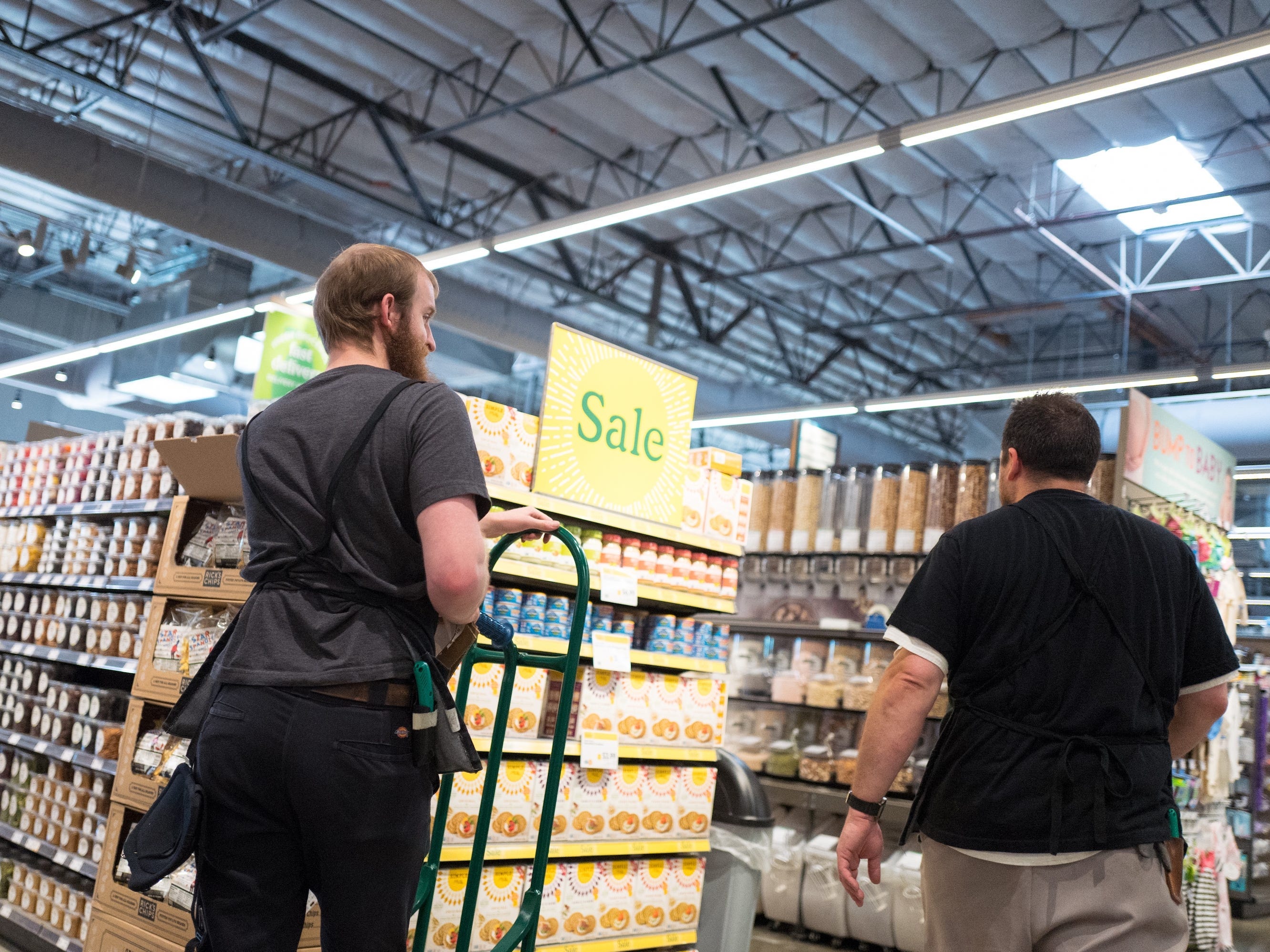 Whole Foods employees say they are frustrated by a new dress code going into effect next month that places stricter limits on what they can wear to work.

The new policy, which was announced internally last week, will apply to the Amazon-owned company’s nearly 500 US stores and will go into effect November 2. According to documents obtained by Business Insider, the dress code will now prohibit busy patterns on clothing or face coverings, buttons or pins on employee aprons, ripped jeans, athleisure, and t-shirts with visible logos, slogans, messages, or flags of any kind.

Additionally, employees will no longer be allowed to wear hats and shirts provided by Whole Foods vendors.

The new policy points to a shift in Whole Foods culture, which has long prioritised free expression among its employees, according to three Whole Foods employees, who spoke to Business Insider on the condition of anonymity for fear of reprisal.

“The overall morale at the store every month is getting lower and lower and lower,” an employee at a Philadelphia-area Whole Foods told Business Insider. “It feels like they’re cracking down on overall enjoyment.”

A Whole Foods employee in Portland, Oregon, told Business Insider that up until now, the dress code had been relaxed and rarely enforced at her store.

“When a lot of us started working at Whole Foods back in the day, it was a place where you could wholly be yourself and express your personality while still working your job,” the employee said. “We understand that some parts of that have to go away. But we’re worried that it’s leaning toward a more super-corporate, you’re-just-another-cog-in-the-machine kind of employee situation.”

A supervisor at a Boston-area Whole Foods said she and her coworkers had purchased festive masks for Halloween or on-theme masks with vegetables on them, but under the new guidelines, those will be prohibited.

Employees also said they were disappointed over the ban on vendor merchandise.

“Maybe Amazon is just very strict and wants everyone to look like robots and look the same way,” said the Boston-area Whole Foods employee. “But we pride ourselves on the vendors that we get â€” they don’t have GMOs in their products and are organically sourced.”

Two employees said that they will likely have to purchase new clothing in order to adhere to the dress code.

A Whole Foods spokesperson told Business Insider in an emailed statement that the updated dress code provides employees with “one simplified and unified policy to follow when working in our stores.”

“Like many of our policies, our dress code is in place to ensure that we are prioritising operational safety and serving our customers by keeping the focus in our stores on selling the highest quality food and fulfilling Whole Foods Market’s purpose of Nourishing People and the Planet,” the spokesperson said.

Whole Foods came under scrutiny for its dress code policy earlier this year when employees tried to wear shirts and face masks in support of the Black Lives Matter movement. In July, a Connecticut Whole Foods told employees they weren’t allowed to wear shirts printed with the phrase “racism has no place here,”Business Insider’s Hayley Peterson reported at the time. The same month, employees filed a class-action lawsuit against Whole Foods, claiming that the company forbid them from wearing Black Lives Matter masks and threatened them with termination.

Subscribe to Business Insider to read the full story.

If you work at Whole Foods and have a tip or story to share, you can contact this reporter at [email protected]