Meet the casino billionaire behind The Venetian and Marina Bay Sands, who's worth $37 billion, lives in a Vegas mansion, and has donated more than $25 million to Trump 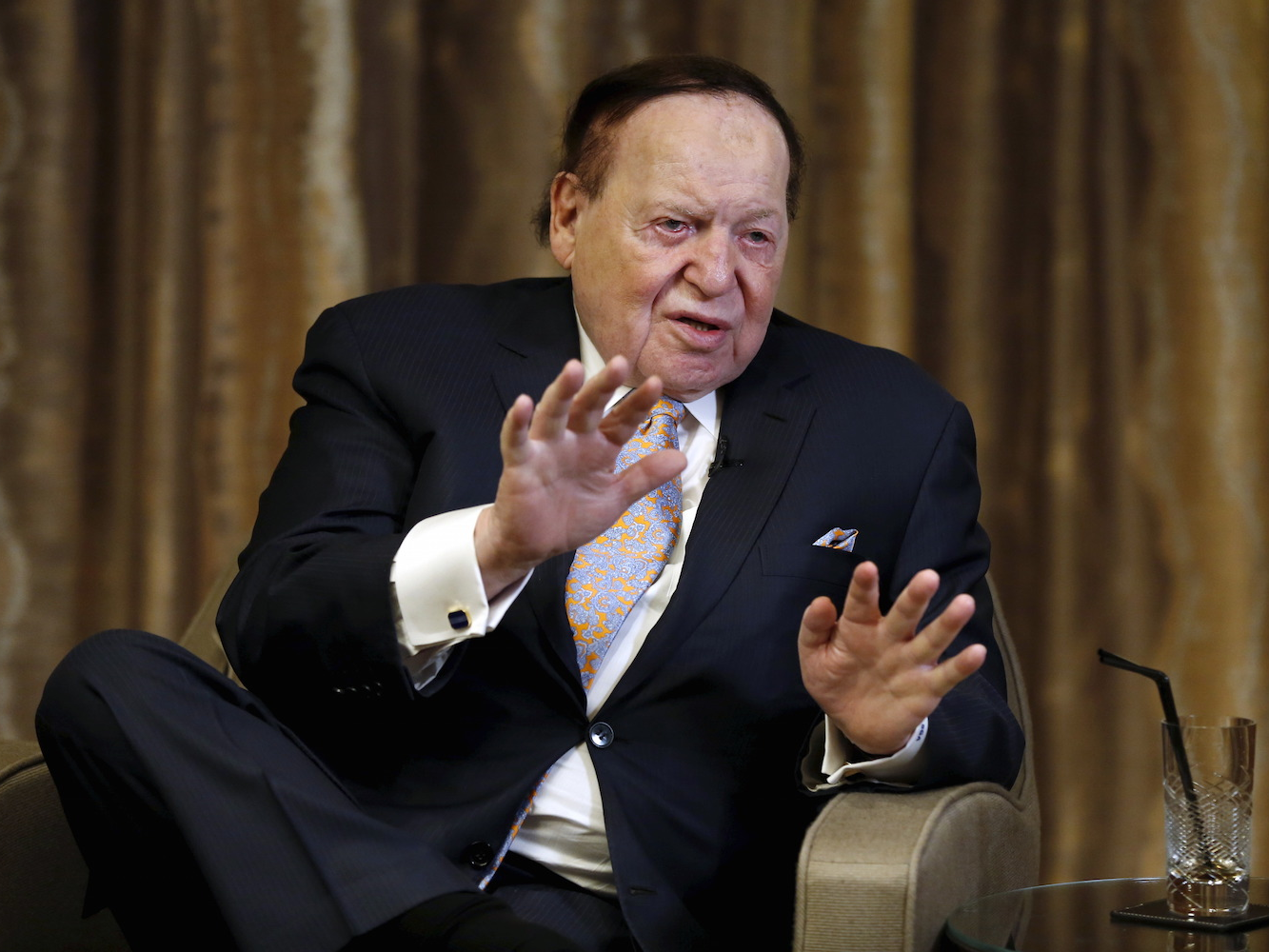 You may not have heard of Sheldon Adelson, but you’ve probably heard of some of his world-famous properties: the Venetian and the Palazzo hotels in Las Vegas, or perhaps the Marina Bay Sands in Singapore made famous by “Crazy Rich Asians.“

Adelson is the billionaire chairman and majority shareholder of the world’s largest casino operator, Las Vegas Sands. His company operates the Venetian in Las Vegas and the Marina Bay Sands in Singapore, among others.

In 2020, the Adelsons plan to donate at least $US100 million to Trump’s reelection campaign and other Republican candidates, according to The Guardian.

Adelson and his wife, Miriam, reportedly live in a Las Vegas megamansion, own a 300-foot superyacht, and travel in a 380-passenger private jet.

Here’s a look at the Las Vegas billionaire’s life, career, and wealth. Adelson was the son of a cab driver in Boston. His first jobs included selling newspapers on street corners, selling ads in trade magazines, and serving as a court reporter. ReutersPeople line up for taxis at COMDEX in 1995.

The trade show became one of the most attended in the world, and in 1995, Adelson and his partners sold it along with other smaller shows to SoftBank for $US862 million.

Adelson didn’t get into the casino business until he was 55 years old. In 1989, he bought the Sands Casino & Hotel in Las Vegas for $US128 million. He demolished the hotel in November 1996.

It took two years and cost $US1.5 billion to build The Venetian. 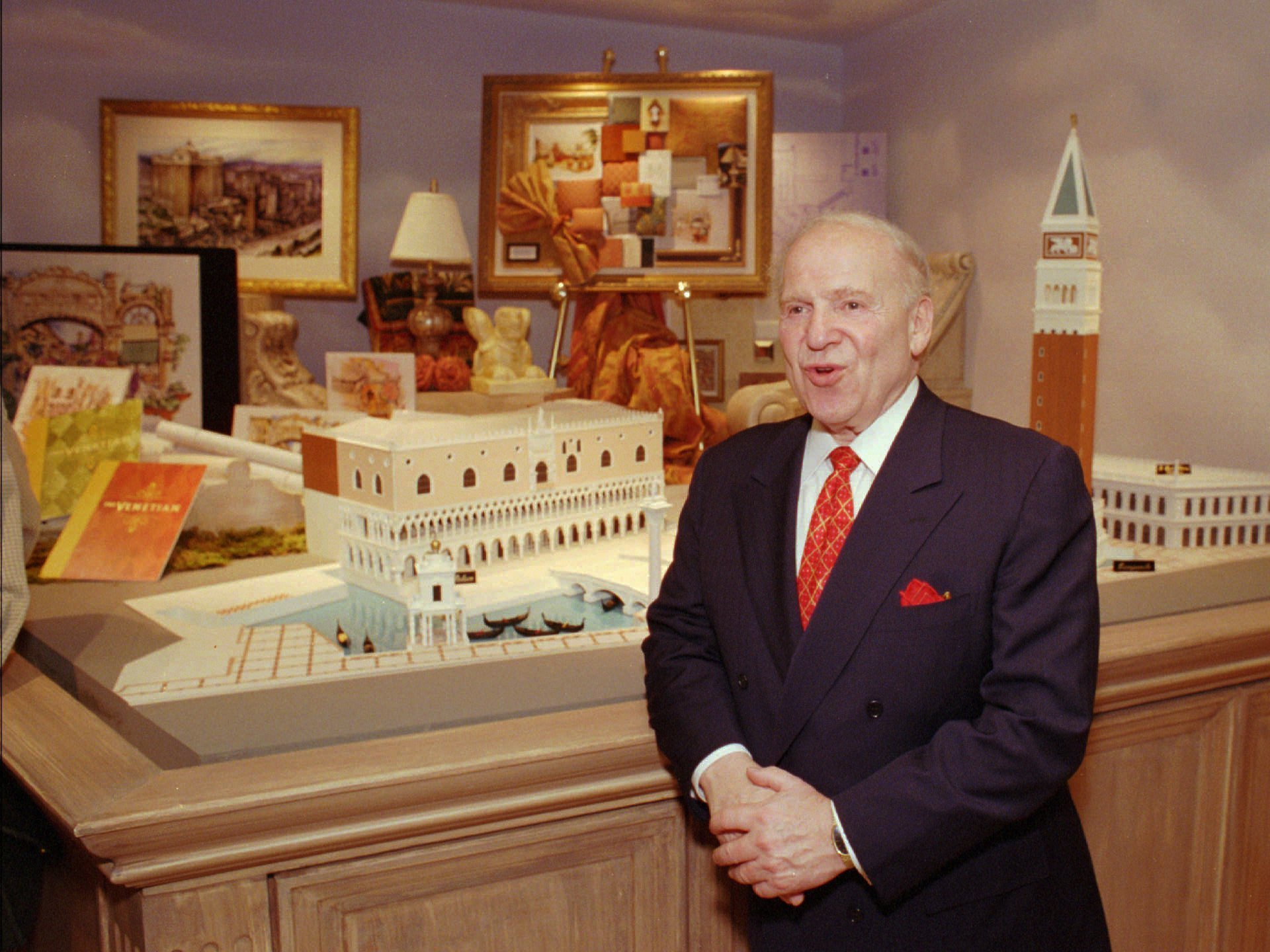 He also enlisted the help of a historian from Venice who worked with the hotel’s architects and interior designers.

The Venetian opened in April 1999. It just celebrated 20 years on the Las Vegas strip. “The Venetian’s success in Las Vegas, and particularly our convention-based business strategy, would end up being the basis for our company receiving coveted licenses in Macao and Singapore,” Adelson said in a statement to the Las Vegas Review-Journal, a newspaper he owns.

In 2004, Adelson opened the Sands Macau, which cost at least $US265 million to build. It opened in 2004 as Asia’s first “American-style” casino and went on to become “extraordinarily successful,” according to Forbes.

Adelson is also in the media business. The newspaper was among a handful of publications that endorsed Trump in the 2016 election. 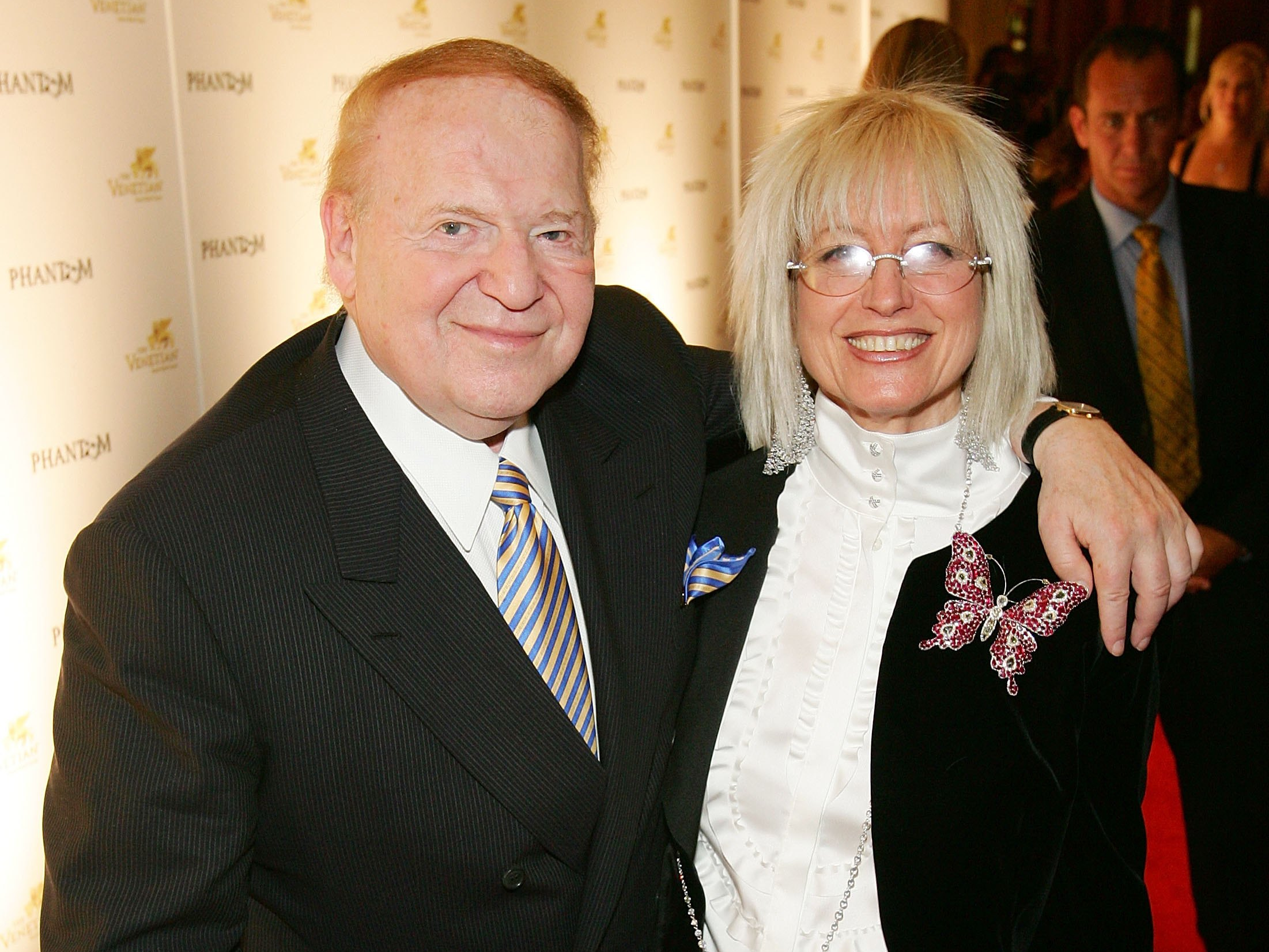 Both were divorced when they met in the late 1980s.

It was reportedly Miriam’s idea to make The Venetian in Las Vegas Venice-themed after the couple vacationed in the Italian city for their honeymoon.

The Adelsons live in a megamansion in Summerlin, an affluent Las Vegas planned community. 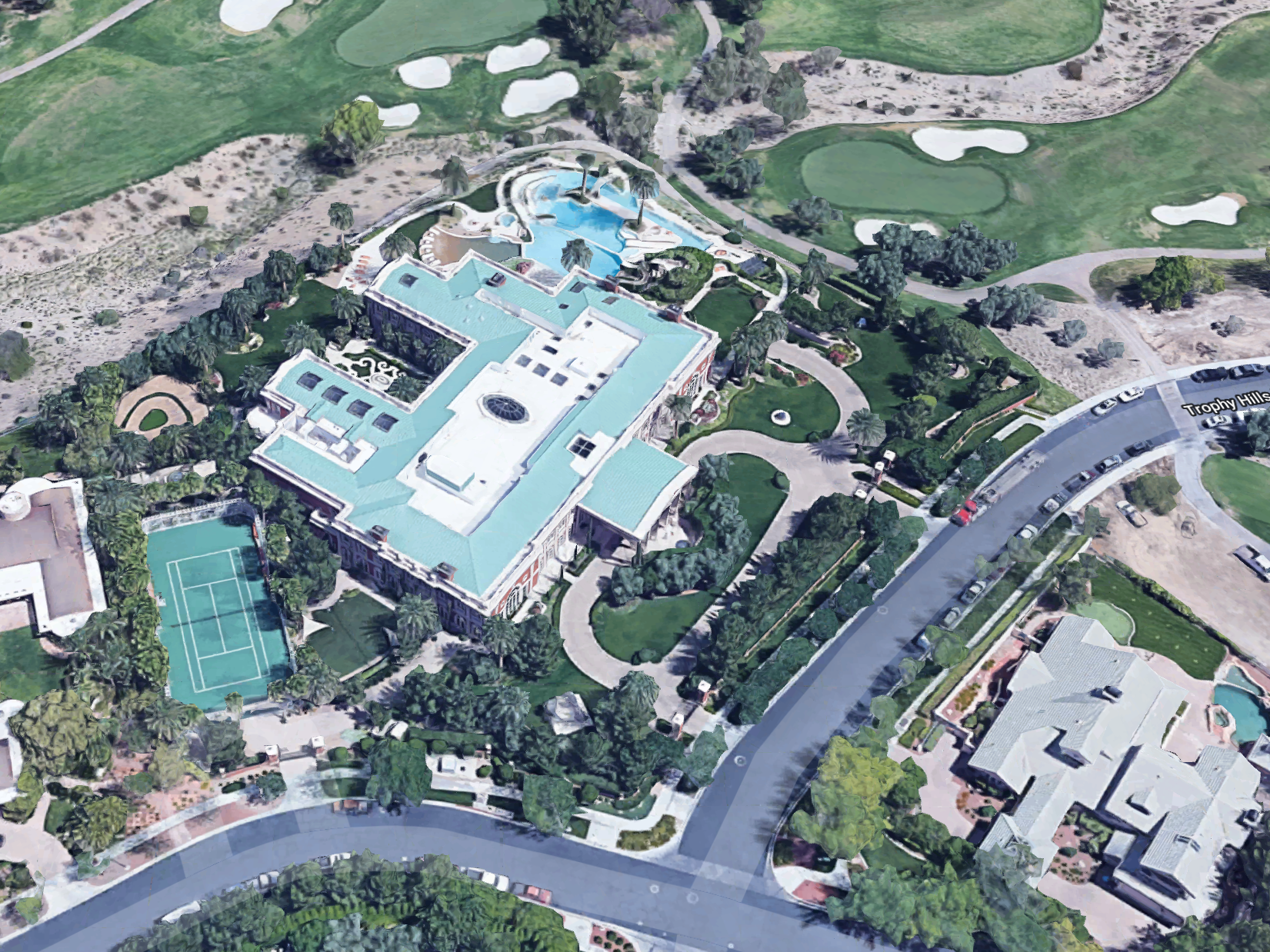 The multimillion-dollar home on Trophy Hills Drive appears to include a swimming pool and tennis courts.

In addition to the Las Vegas mansion, Adelson reportedly owns $US52 million worth of property in Malibu, California. 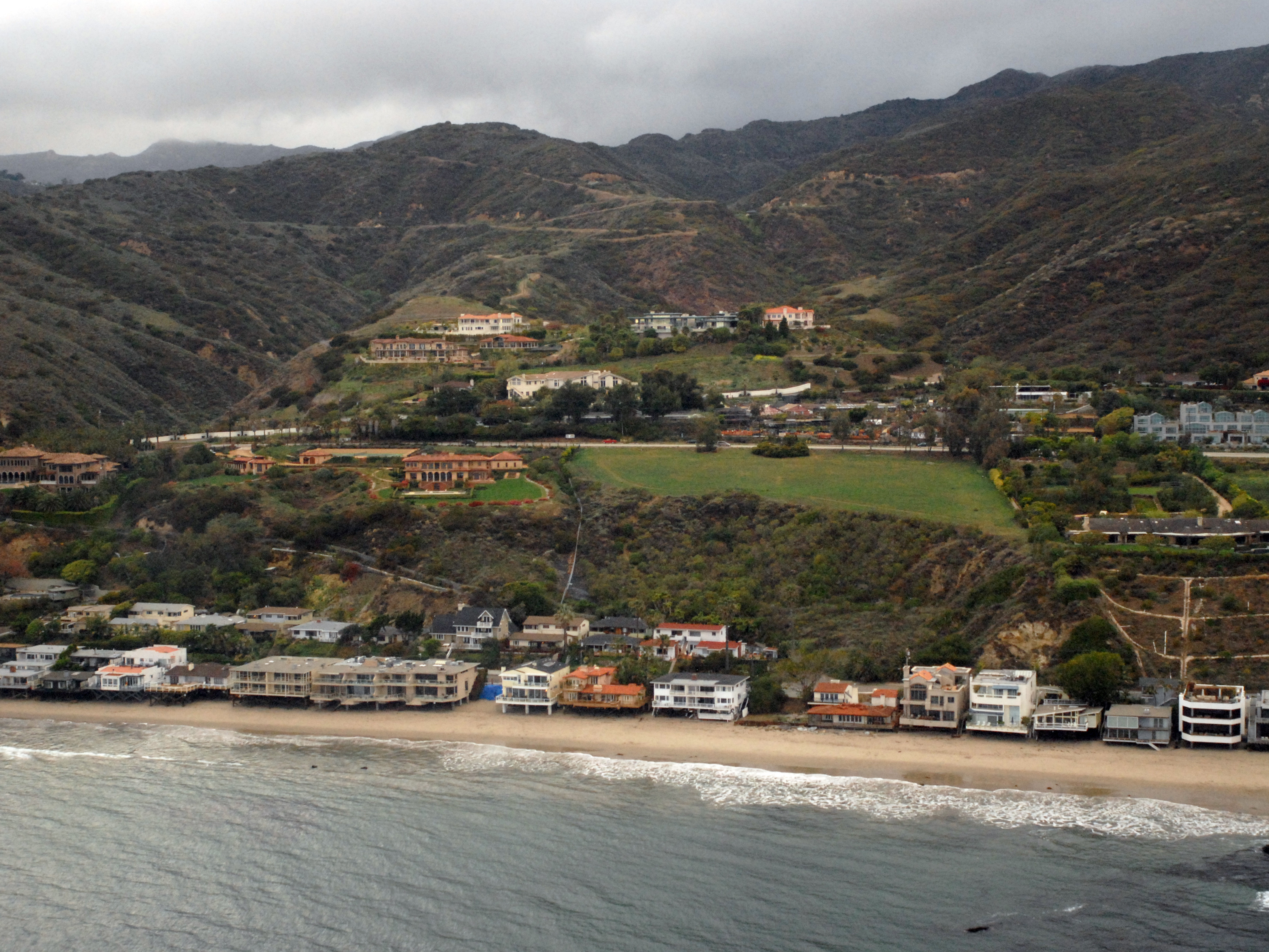 The billionaire has reportedly spentabout $US52 million on several properties in the Colony, an exclusive gated community in Malibu, which is beloved by Hollywood celebrities.

Adelson also owns a 300-foot superyacht that he named “Queen Miri” after his wife, Miriam. 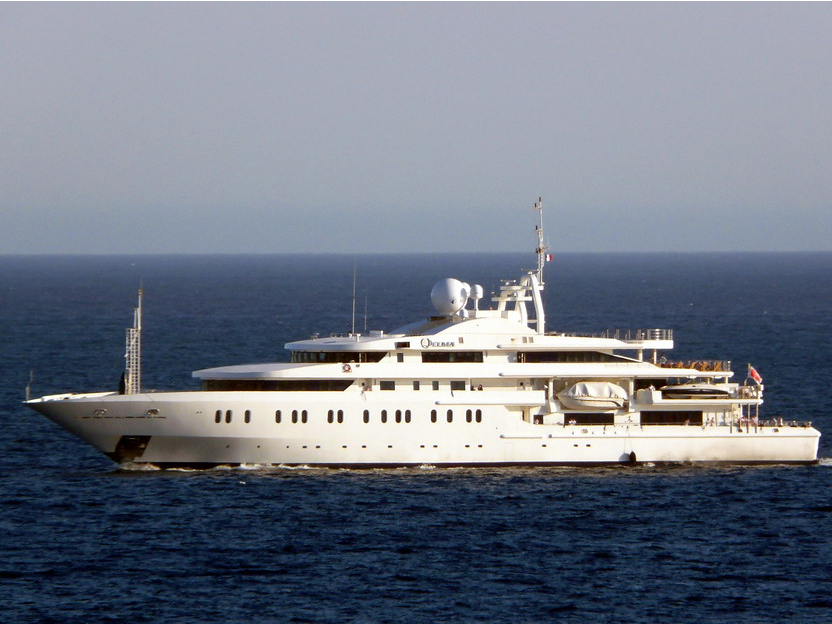 Flickr/Creative Commons/twiga269Adelson’s yacht, then called Delma, arriving in Cannes in 2008.

The yacht was originally calledAnnaliesse when it was built in 2004 and then later renamed Delma.

After Adelson bought the yacht in 2015, he had it remodeled and extended in length by more than 21 feet, according to Beam Yachts. One yachting website puts Queen Miri’s value at about $US70 million. Adelson reportedly owns an Airbus A345, which he once used to set a record for the longest flight ever to depart from Israel’s Ben-Gurion International Airport. According to Haaretz, he made a 17-hour and 40-minute flight from Israel to Honolulu, Hawaii, in 2017.

Adelson is a major donor to Republican politicians. 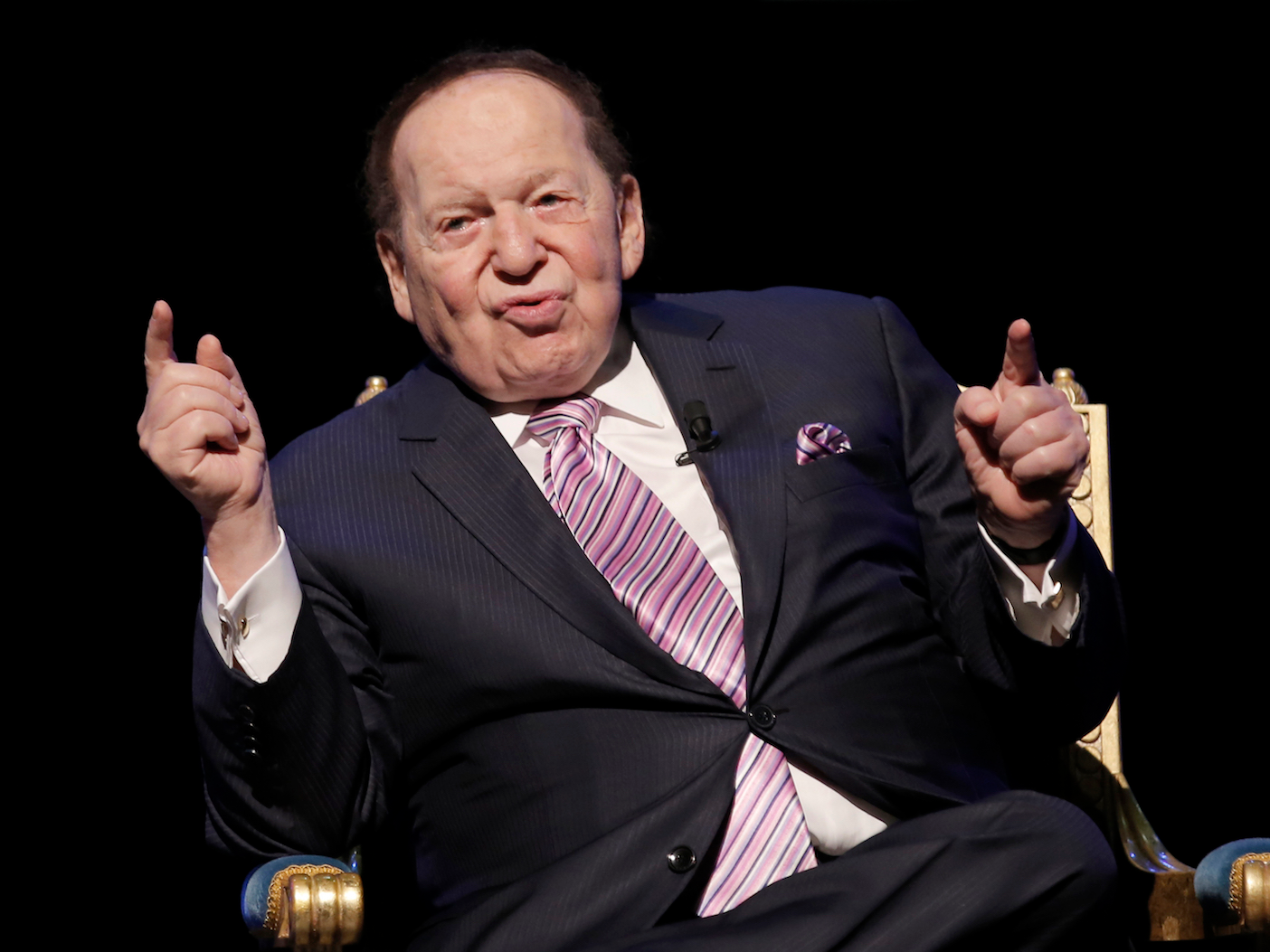 In the 2018 election cycle, Adelson and his wife were the top individual donors to federal candidates and campaigns, donating almost $US124 million to Republican causes, mostly via super PACs, according to the Centre for Responsive Politics.

Adelson gave at least $US17 million in political contributions to Gingrich during his 2012 presidential campaign, according to The New York Times.

Republican fundraisers recently told The Guardian that Adelson was planning on donating at least $US100 million to Donald Trump’s reelection campaign and other Republican candidates in 2020.

Adelson’s company did not immediately respond to Business Insider’s request for comment on his donation plans.

Adelson has made at least $US25 million in political contributions to Donald Trump, earning him the nickname “Trump’s Patron-in-Chief.” The Adelsons wrote checks amounting to $US20 million during Trump’s campaign and donated an extra $US5 million for the inauguration festivities, according to ProPublica.

“I would put Adelson at the very top of the list of both access and influence in the Trump administration,” Craig Holman of the watchdog group Public Citizen told ProPublica in 2018. “I’ve never seen anything like it before, and I’ve been studying money in politics for 40 years.”

Adelson is also a major donor to Jewish organisations. 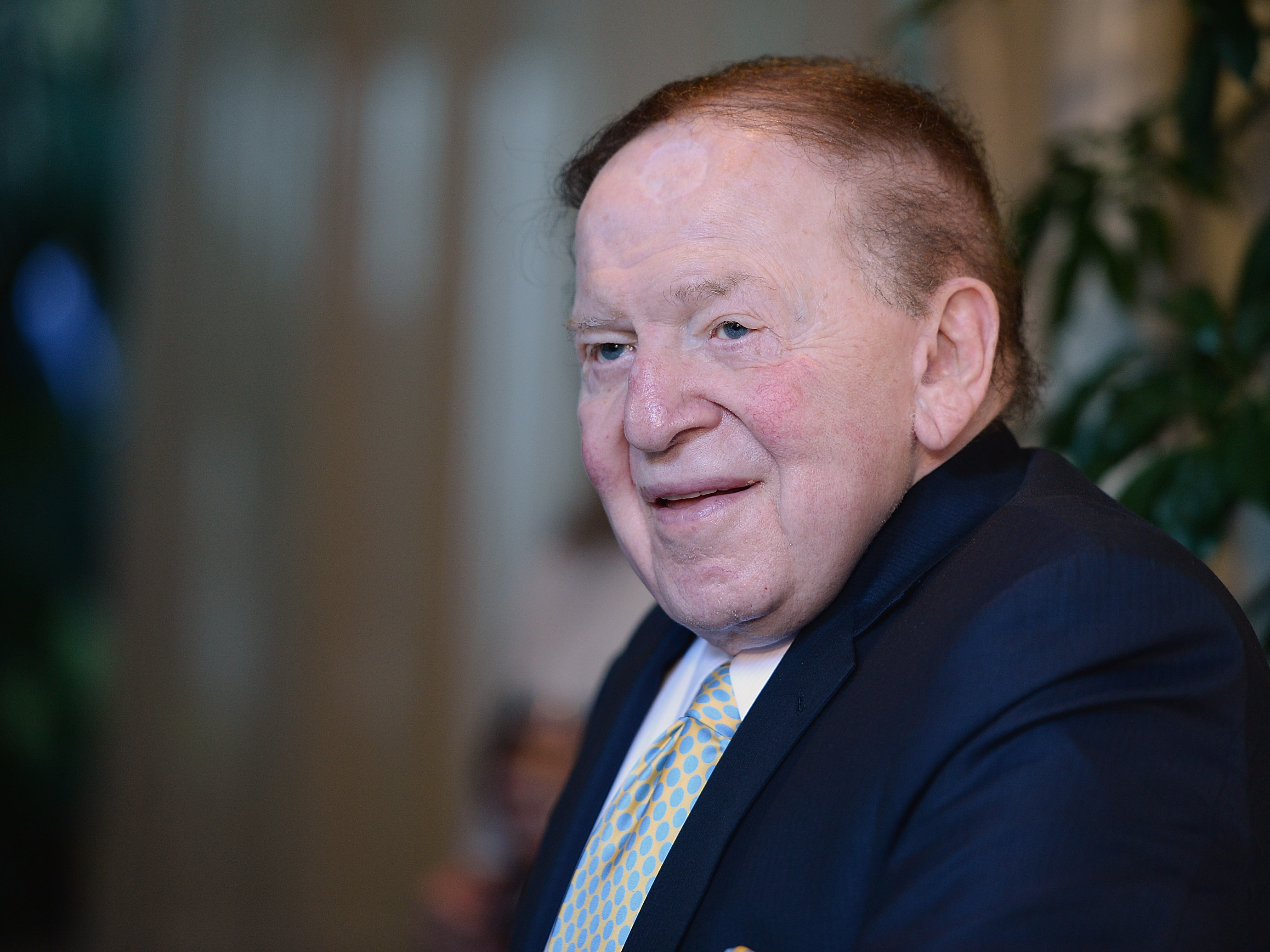 Michael Kovac/WireImageAdelson at a gala benefiting Holocaust educational programming in schools in 2014.

He’s given at least $US410 million to the Birthright program that provides funding for trips to Israel for young Jewish adults, according to Forbes.

In March 2019, it was reported that Adelson was being treated for non-Hodgkin’s lymphoma. 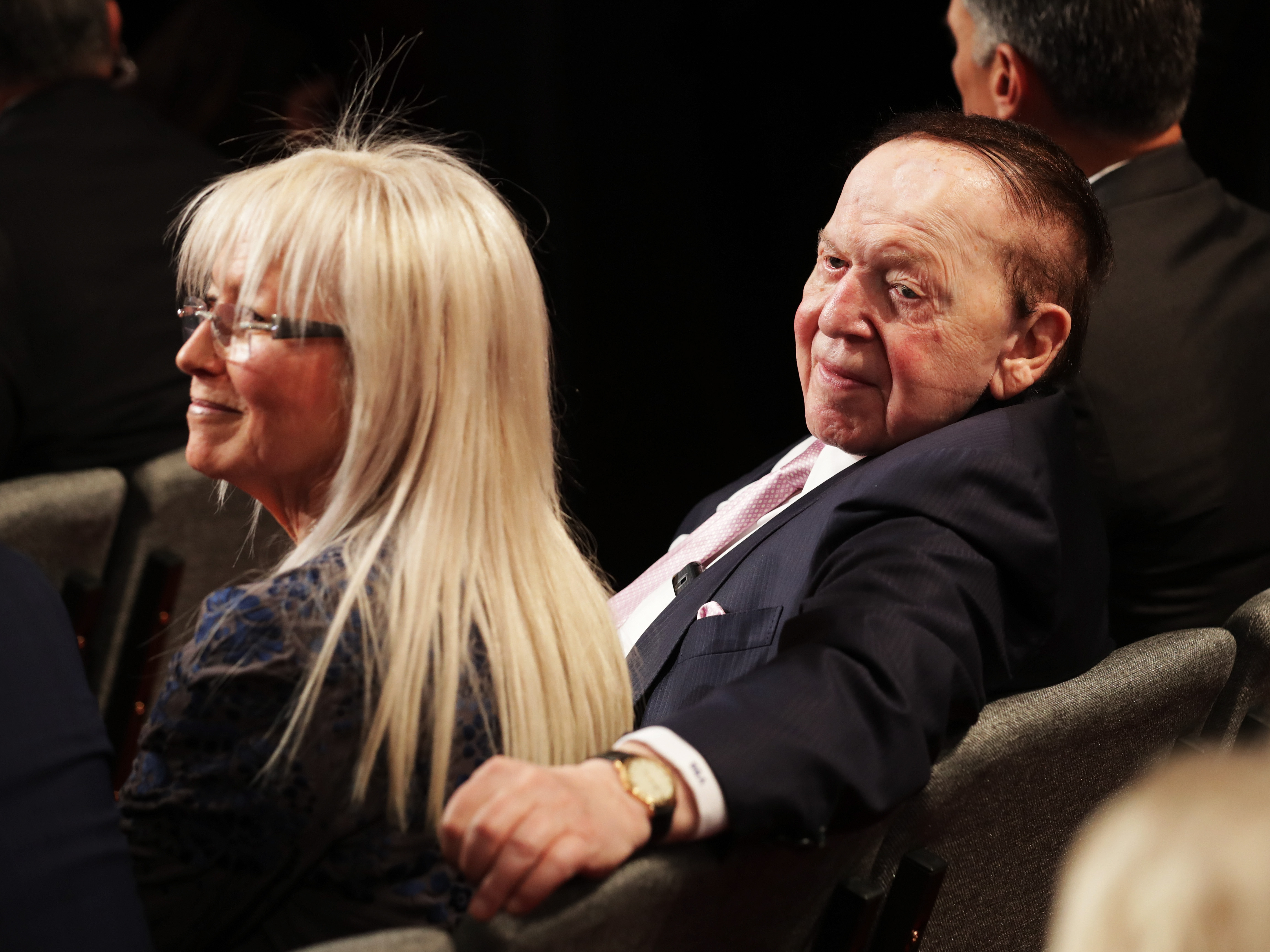 Ron Reese, a spokesman for Adelson’s company, told Fortune that Adelson was experiencing side effects from his medication.

“These side effects have restricted his availability to travel or keep regular office hours,” Reese told the magazine in a statement. “They have not, however, prevented him from fulfilling his duties as chairman and CEO.”

In April 2019, the casino mogul made $US2.2 billion in one week thanks to his property in Macau. 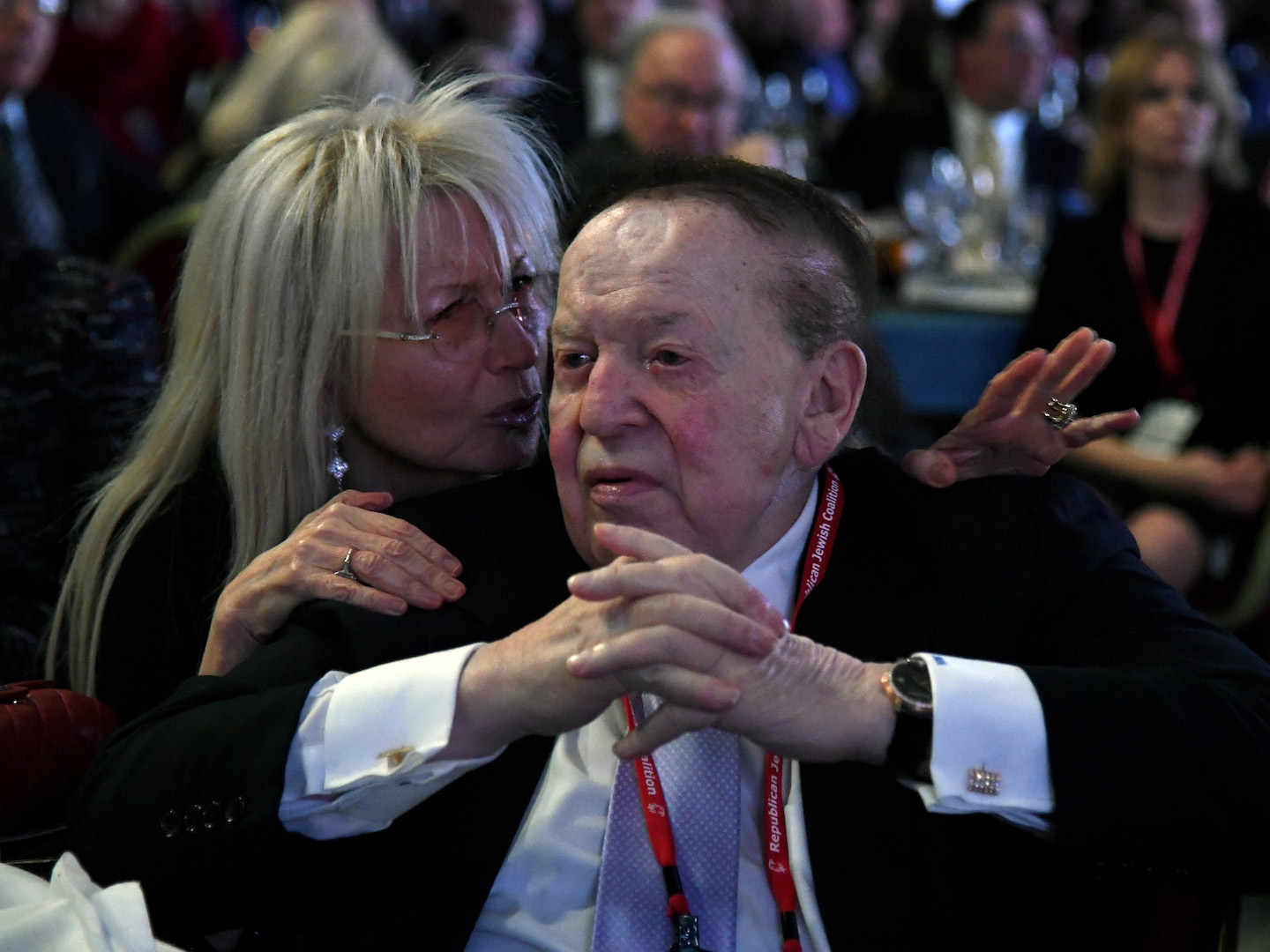 The Las Vegas Sands’ share price rose 8.8% on one week thanks to significant gambling revenue in Macau, according to Forbes.

However, the coronavirus outbreak in recent weeks has hit Macau hard, resulting in an 80% decrease in visits to the company’s casinos, Marketplace reported.