Michael Bennet ran for president in 2020. Here's everything we know about the candidate and his platform. Michael Bennet dropped out of the 2020 presidential race the night of the New Hampshire primary on February 11, 2020.

Who is Michael Bennet?

Current job: US Senator from Colorado.

Family: Bennet is married to Susan Diane Daggett, an attorney. Together they have three daughters.

Who was Michael Bennet’s direct competition for the nomination?

Based on a recurring series of national surveys we conduct, we can figure out who the other candidates competing in Michael Bennet’s lane are, and who the broader opponents are within the party. 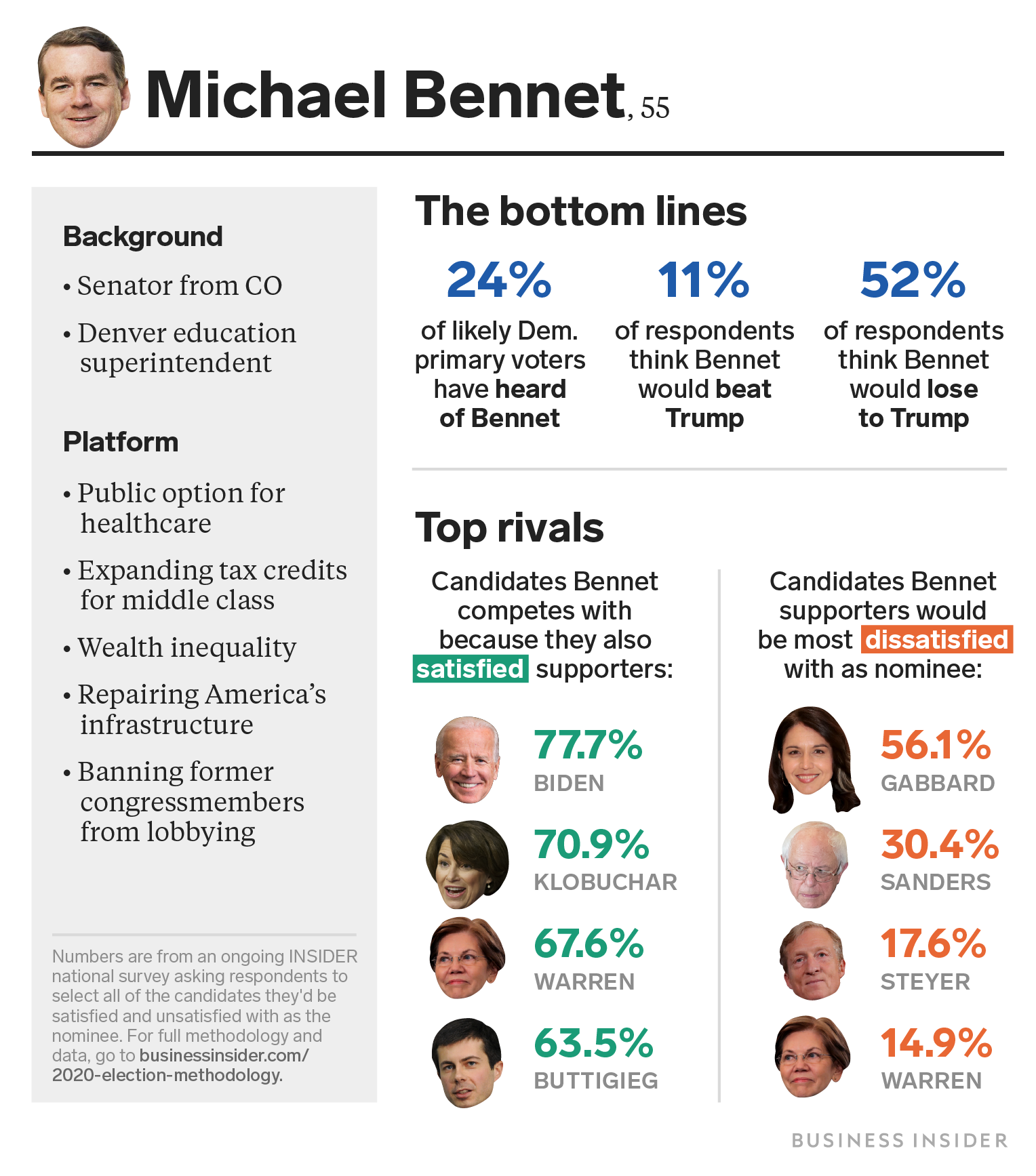 What are Michael Bennet’s political positions?

What are Michael Bennet’s political successes?

How is Michael Bennet viewed by voters compared to the competition?

INSIDER has conducted a number of other polls to check in on how these candidates are perceived in comparison to one another. When we asked respondents to one poll to rank how far to the left or to the right they considered the candidates, Bennet was considered to be one of the most centrist or right-leaning candidates in the field.Bennet was in the middle of the field when we asked respondents to rank the candidates based on how prepared they are for the rigors of the presidency given what they knew about their history of public service and experience with government. And when asked how likable or personable respondents perceived the candidates to be, Bennet emerged towards the bottom of the pack, possibly due to his low profile.

Where did Michael Bennet poll best?

According to INSIDER’s polling, Bennet is considered by both Democrats and other respondents as a weaker than typical candidate against President Trump, however this is largely owing to his low name recognition and could change with additional campaigning.

How much money did Michael Bennet raised?

Bennet reported raising $US2.8 million in the second quarter of 2019 and transferred an additional $US700,000 from his Senate campaign fund.

How did Democratic voters feel about Michael Bennet’s qualifications?

An attribute considered to be a liability based on the preferences of self-reported Democratic voters is that he grew up wealthy (-42%).

Read more of our stories on Michael Bennet: