These 15-year-old twins are the reigning queens of Musical.ly, the Generation Z app that was just bought for ~$1 billion Matthias Nareyek/GettyLisa and Lena attend the New Faces Award Style 2017 at The Grand on November 15, 2017, in Berlin, Germany.

Lisa and Lena Mantler, 15-year-old twins from Germany, have one of the fastest-growing fan bases on the internet. You’ve probably never heard of them, but the teen in your life has.

The girls are the reigning queens of Musical.ly, the social-media app of choice for Generation Z. Teens record and post 15-second clips of themselves lip-syncing, dancing to popular music, and pulling stunts. The app launched in 2014 and has racked up over 200 million “musers.”

In November, the startup behind Musical.ly was purchased
in a deal valued up to $US1 billion.

Here’s how Lisa and Lena rose to stardom before their braces came off.

Lisa and Lena Mantler are Mary-Kate and Ashley Olsen for Generation Z.

Teens love them, even if they can't tell them apart. In December 2015, the twins uploaded their first video to Musical.ly -- a six-second clip that showed them lip-syncing to Gnash's 'i hate u, i love you (feat. Olivia O'Brien).' 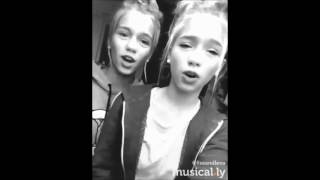 The girls first spotted a Musical.ly video on their Instagram feed.

Musical.ly displays the most-liked videos of the day on its 'featured' page. After a few appearances at the top spot, the twins vaulted into fame at a breakneck pace.

Lisa and Lena amassed an impressive 24 million fans on Musical.ly -- more than 10% of all users on the app -- and they are the third-most-followed people on Instagram in Germany.

They spend about 20 minutes a day on the app making videos, which are mostly music videos that feature synchronised dances and matching outfits from their clothing line.

Their more than 400 videos have received 1.4 billion 'hearts,' a sign of liking a video.

Alex Hofmann, president of Musical.ly North America, said the girls' rapid rise surprised even the team working on the app. By February, Lisa and Lena racked up as many hearts in one day on Musical.ly as Beyoncé received following her pregnancy announcement on Instagram.

'This was extremely impressive for us to see -- (when) an artist like Beyoncé who is known worldwide, on a platform like Instagram that is much bigger, doesn't get many more likes than a Lisa and Lena video on our platform. It's insane!' Hoffman told online magazine Dazed.

'At one point, we were a bit scared because so many people came (to see our posts),' Lisa told Dazed in 2017. 'But at the same time, it was cool to see (that people) liked it. But it's crazy! When you see more people like a post every time you're like, 'Wow, this is so cool.''

In addition to their social media dispatches, the twins tour the world attending awards shows, fan conventions, and concerts. The pair signed with talent agency WME in 2017.

Their merchandising company, J1MO71, sells apparel, bags, wristbands, and phone cases emblazoned with their faces and their slogans, 'Dream It & Do It' and 'Double Trouble.'

'We want to make nice designs to make other people happy,' Lisa and Lena told Stylecaster in a 2016 interview over email. 'It would be really cool if we could be a trendsetter in a small part of the big fashion world. We are young and still got much time left.'

Their fame comes at the cost of privacy. It's not uncommon for the girls to find strangers camped outside their childhood home. They turn off notifications on their phone to avoid the barrage of comments on their videos.