A look inside the White House, which has 132 rooms, a restaurant, and the offices of some of the most powerful people in the world The White House is the most famous home in America.

Located at 1600 Pennsylvania Avenue in Washington DC, the White House is the official workplace and residence of the President of the United States, and every US leader since John Adams has called it his home.

The massive building contains three distinct sections – the West Wing, the East Wing, and the Executive Residence in the middle. It contains six levels, 132 rooms, 35 bathrooms, 412 doors, and 28 fireplaces. And it would take a whopping 570 gallons of paint to cover its outside surface.

Read on to take a tour of the president’s mansion and some of its most notable features.

Here’s an aerial view of the north side of the White House. 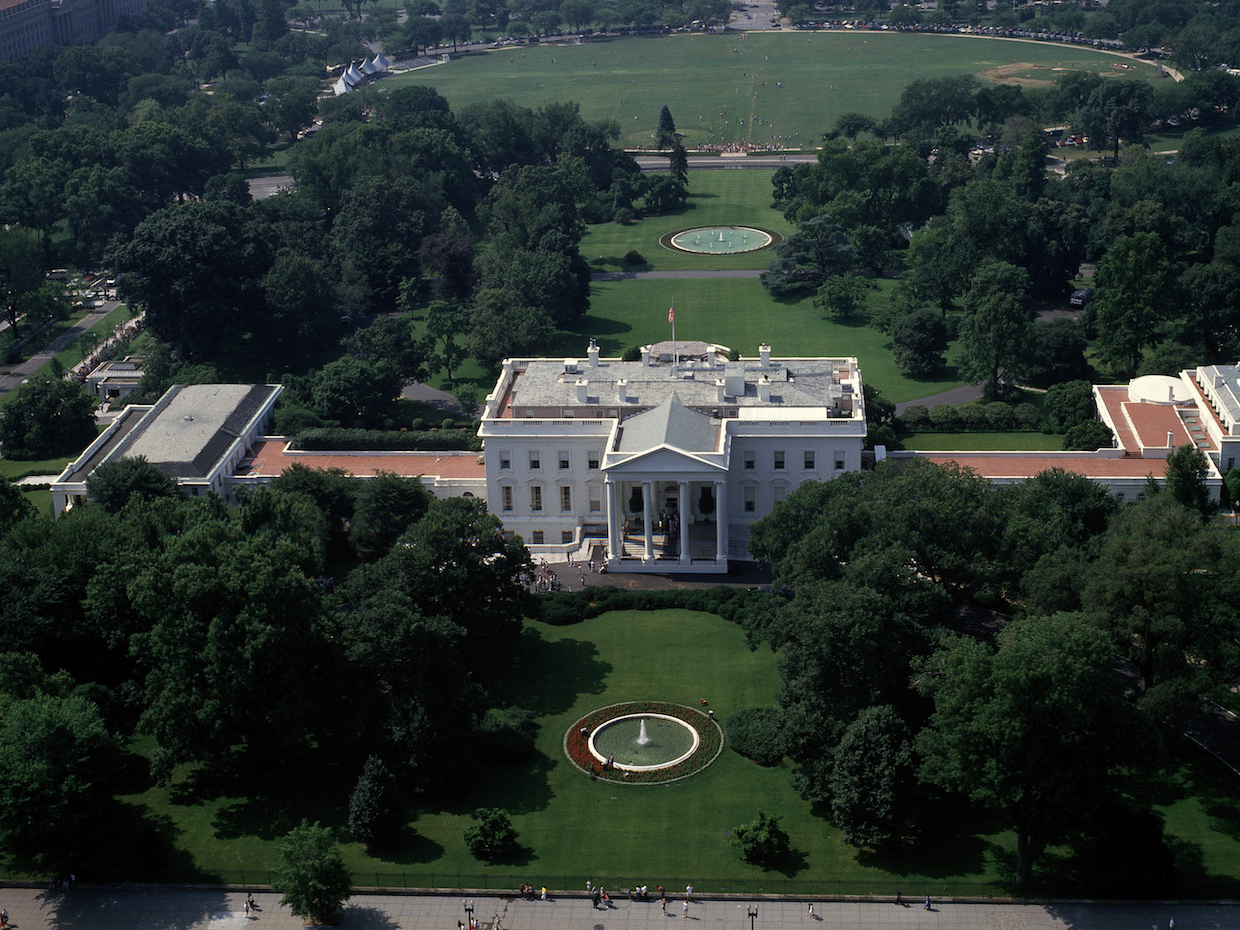 And here’s what it looks like from straight above. 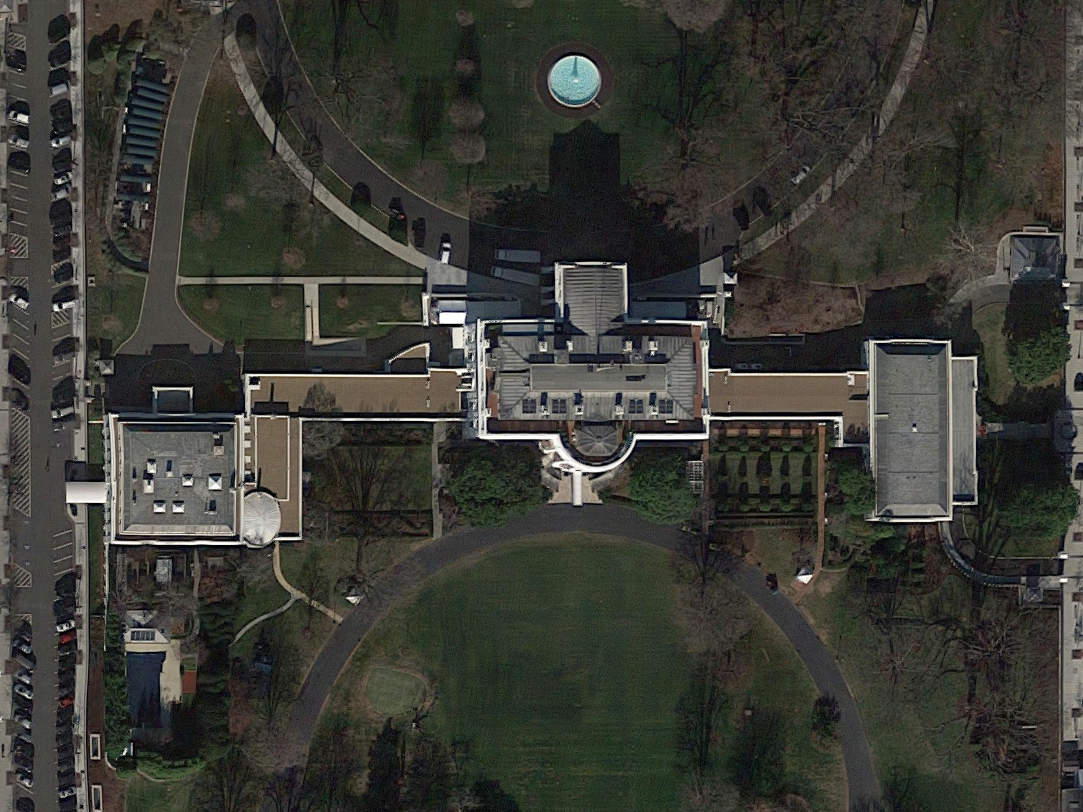 This detailed layout of the White House shows the prominent rooms, offices, and private quarters. 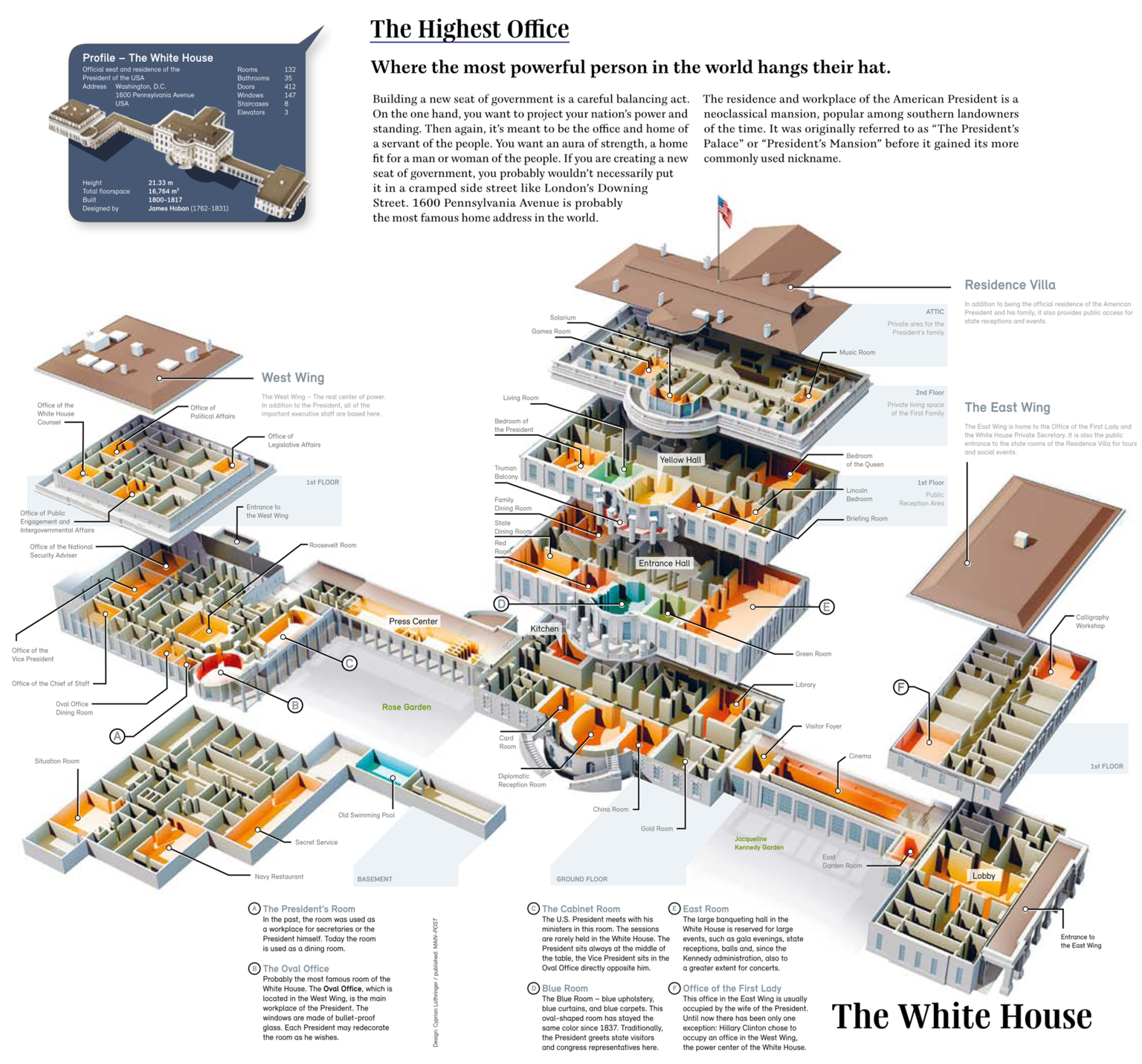 The West Wing’s entrance is marked by a portico.

The West Wing contains some of the most notable rooms in the White House. 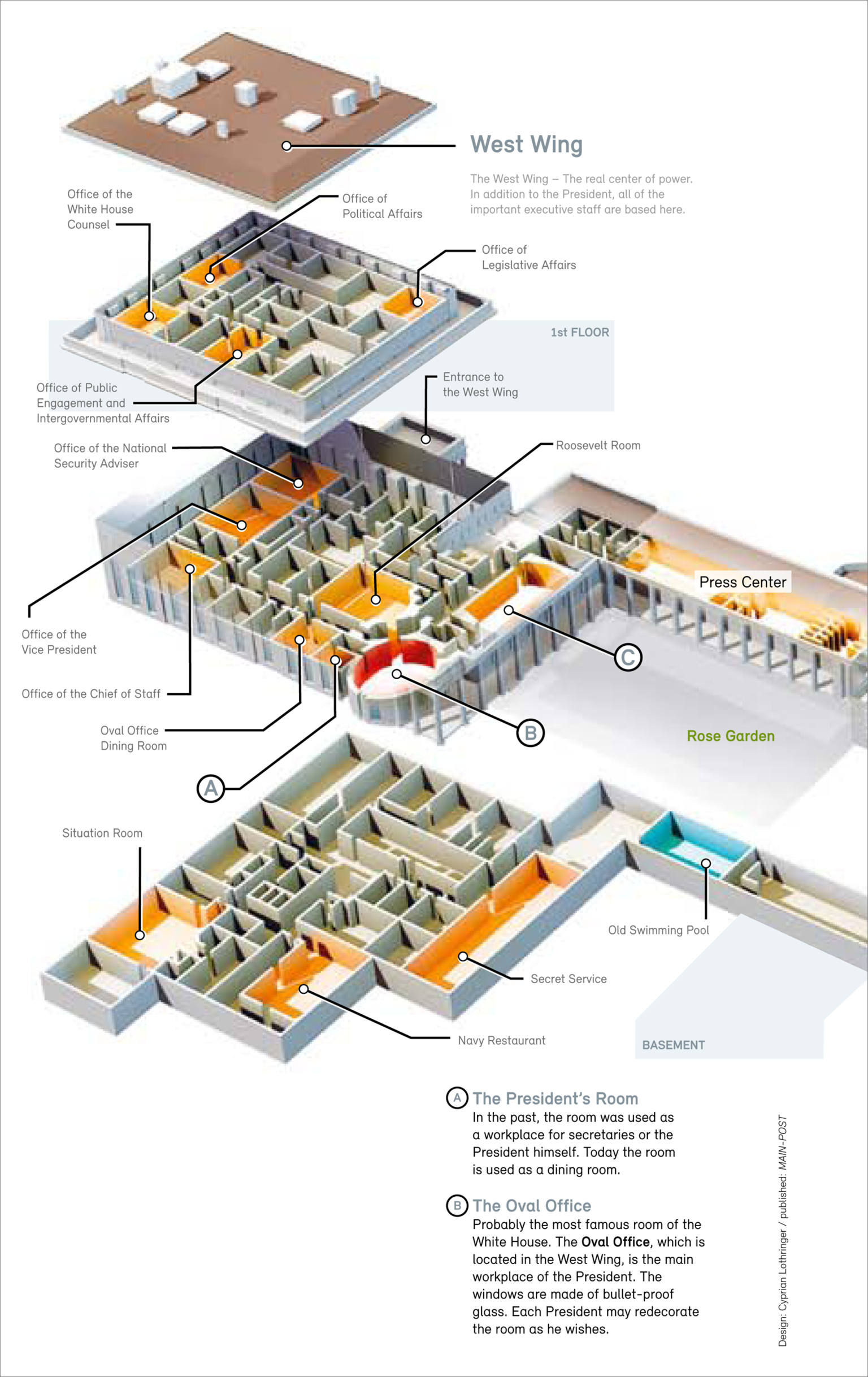 Among them is the Oval Office, the president’s main office. It’s the president’s formal workspace, where he meets or takes calls with with heads of state, diplomats, and his staff. 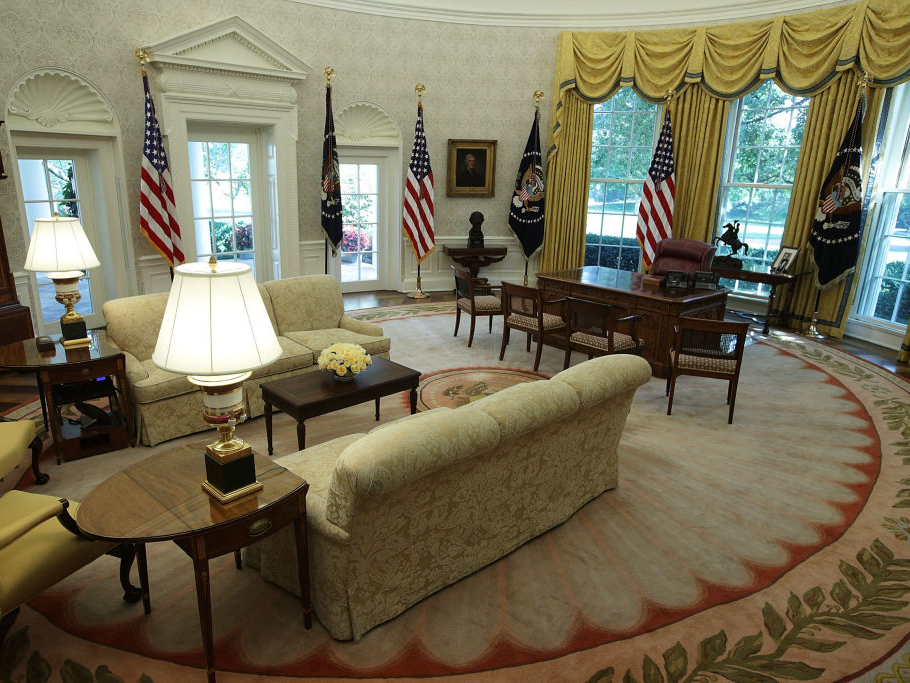 The Oval Office contains the famous Resolute Desk, which dates back to the 1800s and weighs over 1,000 pounds. There are also several paintings, busts, and other decorations. Presidents decorate the office to their personal taste. 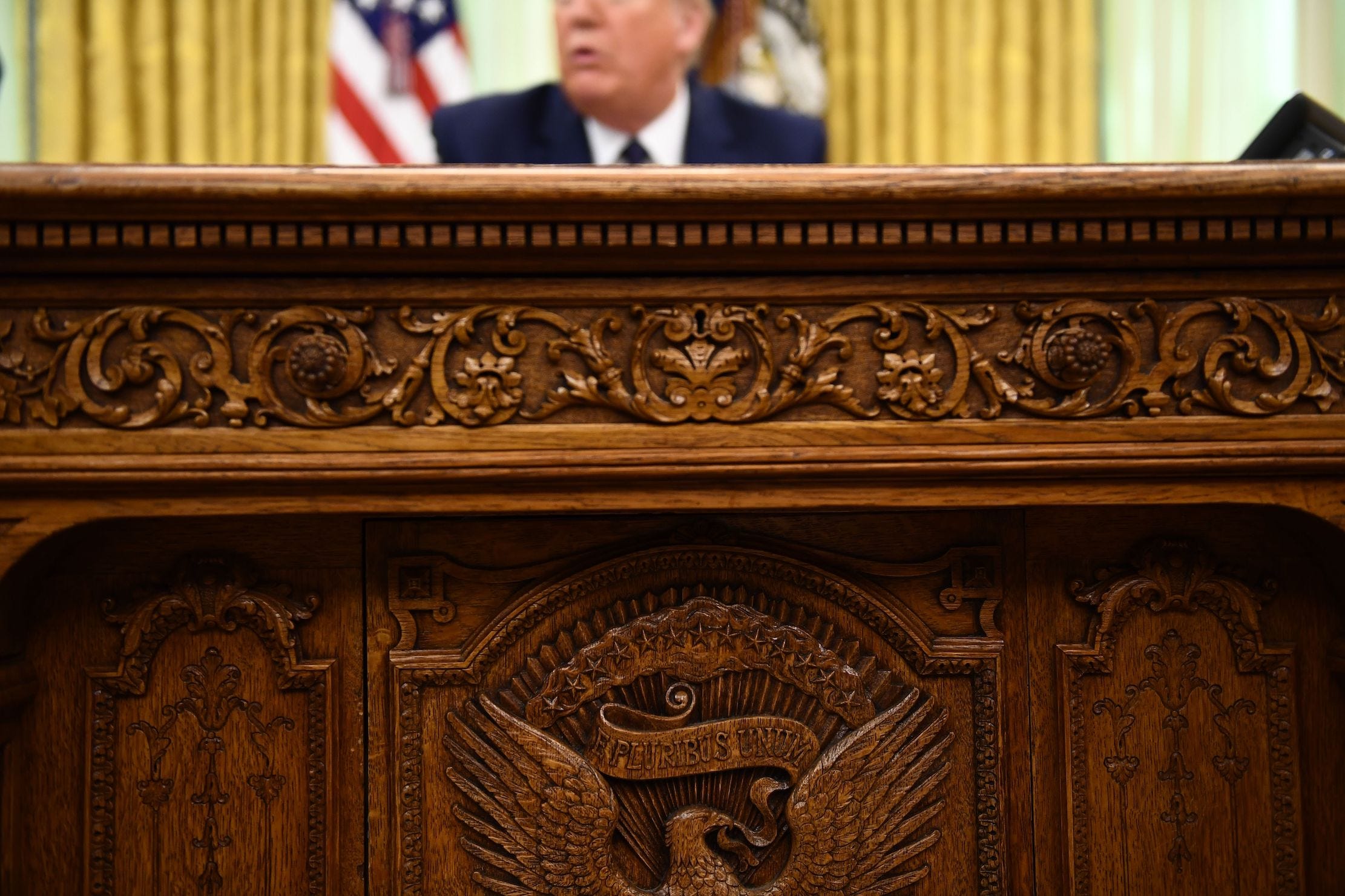 Right outside the Oval Office is the White House Rose Garden, which is used for special ceremonies and to greet distinguished guests. The West Colonnade walkway, also referred to as the “45-second commute” by insiders, leads from the Oval Office to the Rose Garden and to the official residence. 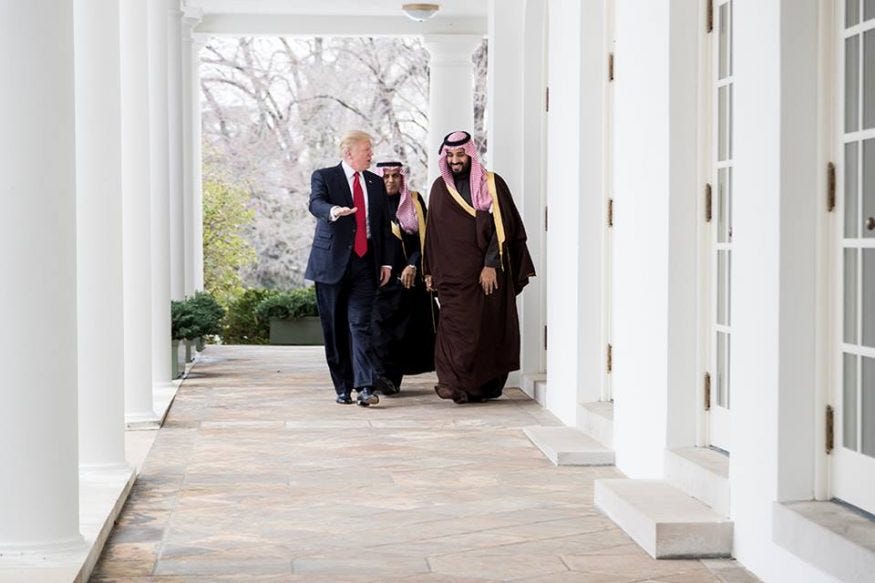 The Cabinet Room is where the president meets with his ministers. It’s customary for the president to sit in the middle of the table. 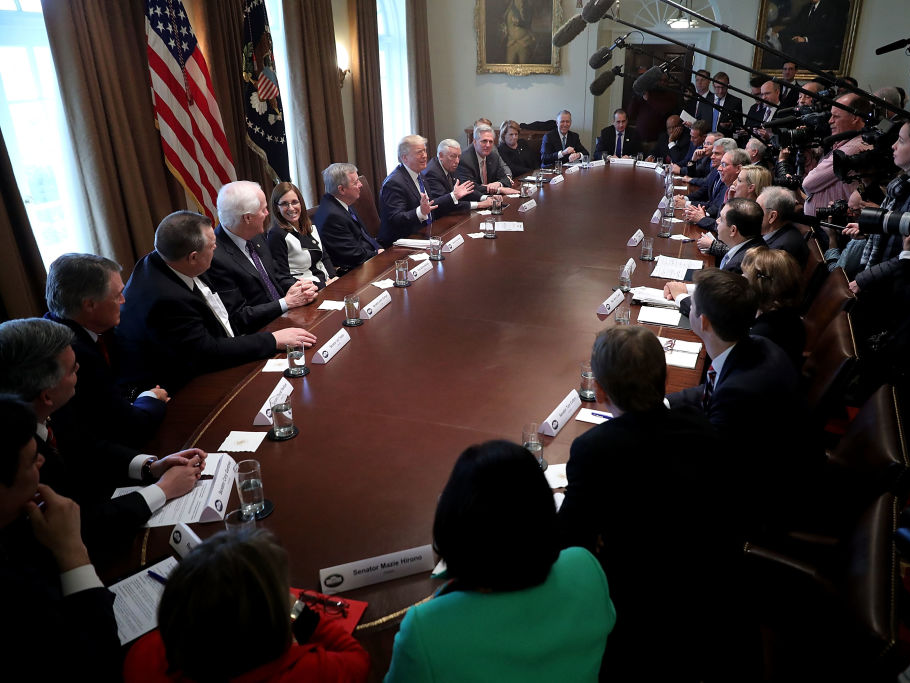 On the ground floor you’ll find the Situation Room — a 5,000 square-foot complex where the president receives intelligence and crisis support. The Situation Room is run by staff from the National Security Council. Another famous West Wing room is the Roosevelt Room. The meeting space is often used to announce appointments and nominations of new staff members. It features paintings of both Theodore and Franklin D. Roosevelt. 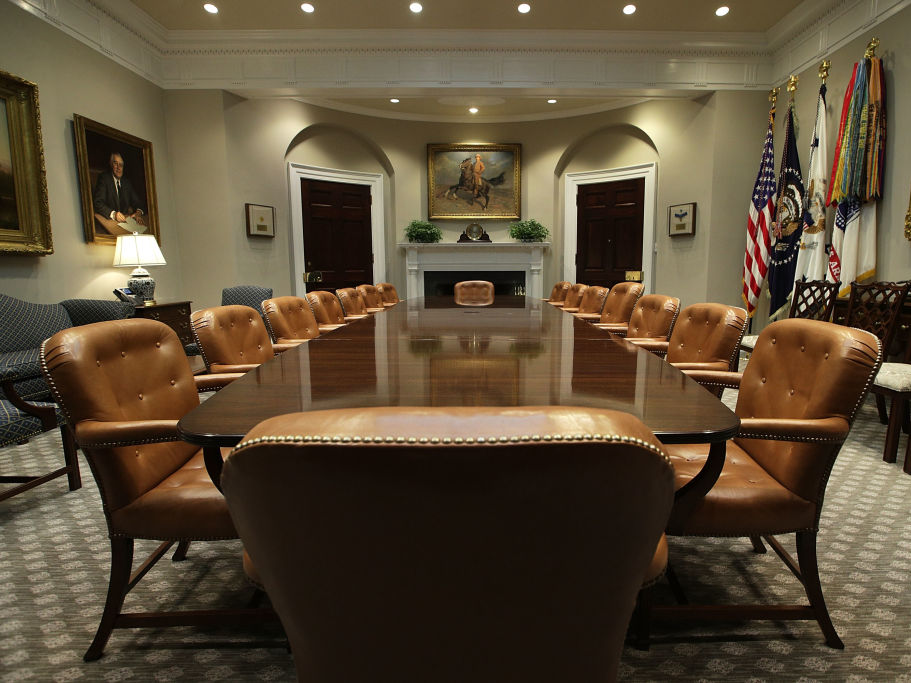 The office of the vice president is also located in the West Wing. 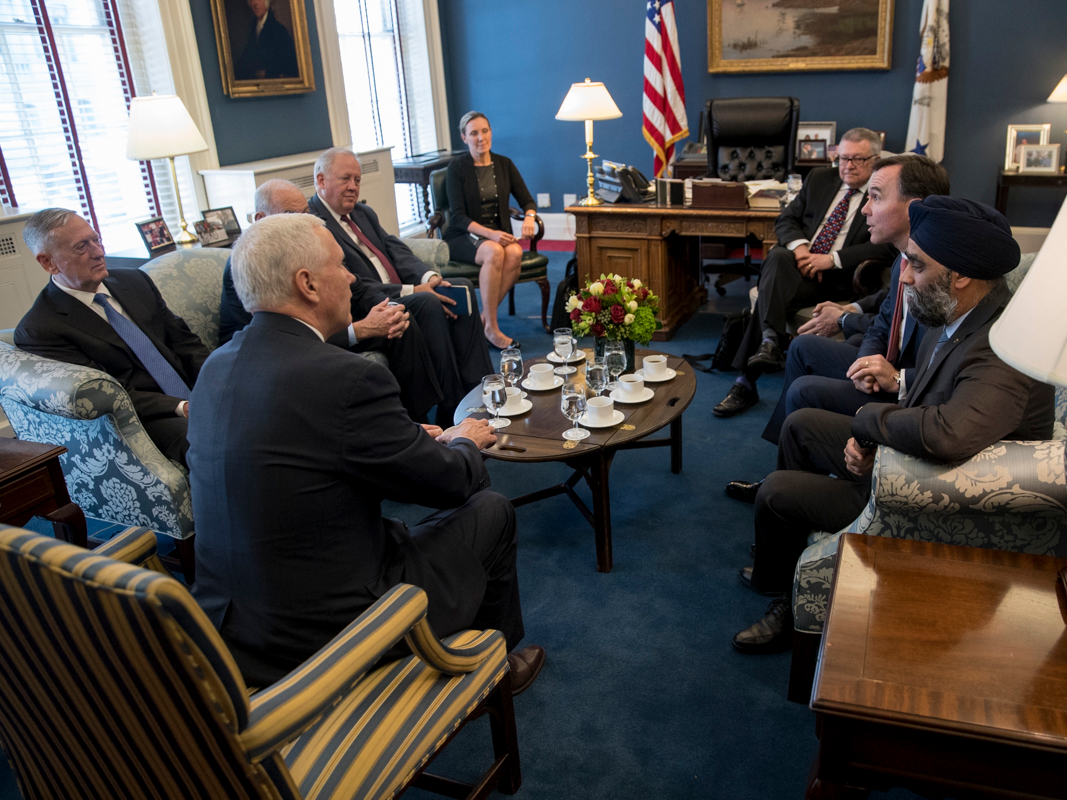 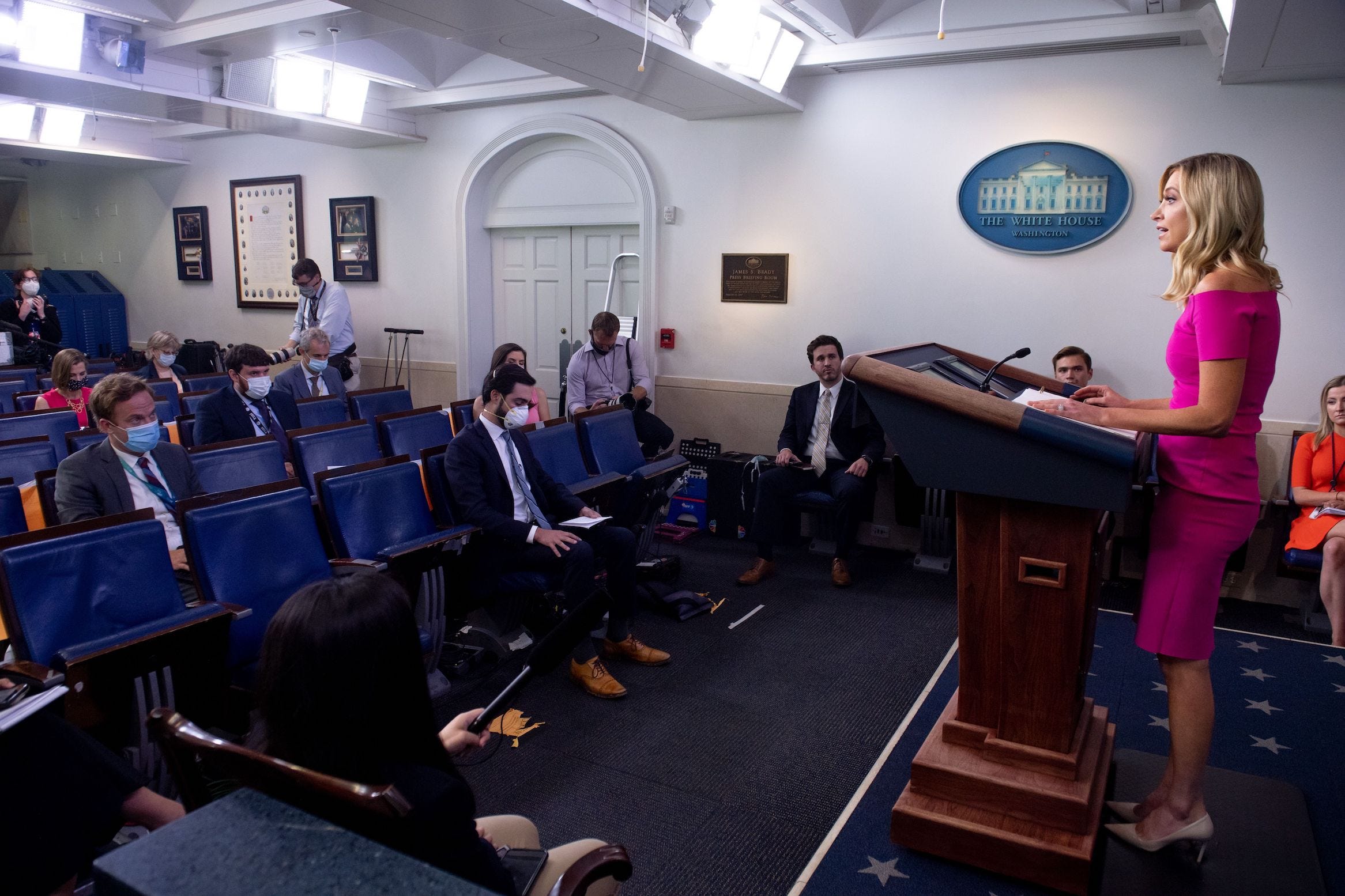 The US Navy runs a restaurant on the ground floor of the West Wing, known as the Navy Mess and Ward Room. 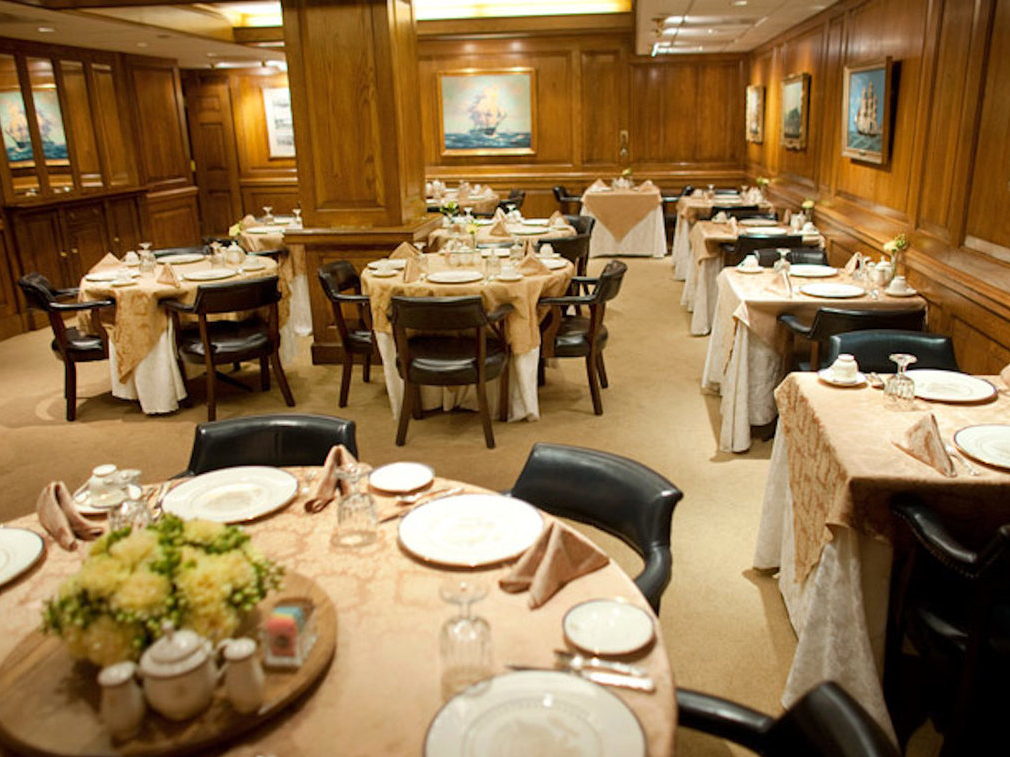 The Executive Residence is the central building of the White House. Here’s a view of the building’s South Portico steps.

This is what’s inside the Executive Residence and the East Wing of the White House. 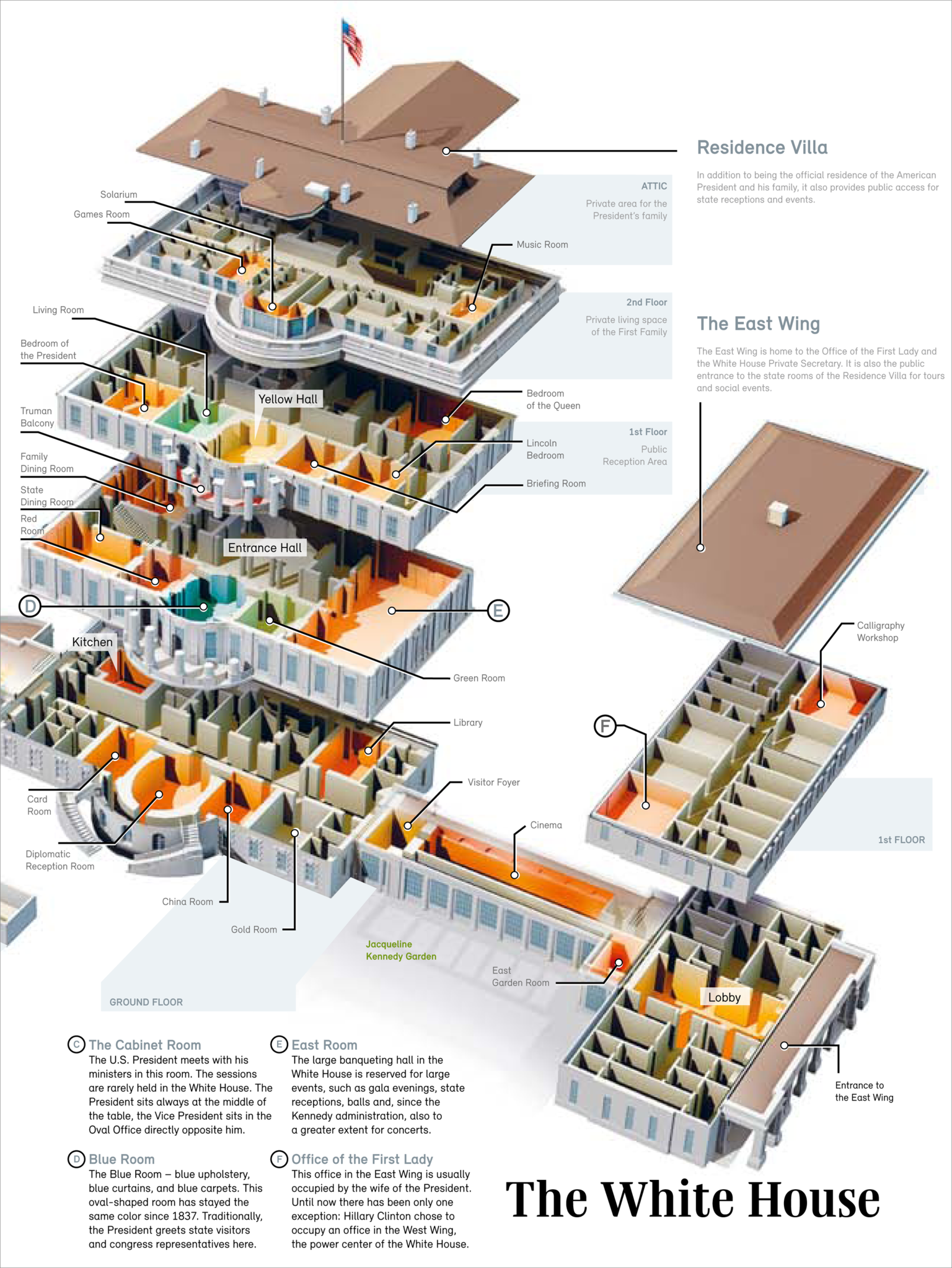 The first floor of the residence contains the Blue Room. The oval-shaped room, which the president uses to formally receive guests, features blue upholstery, blue curtains, and blue carpet. It has stayed the same colour since 1837. 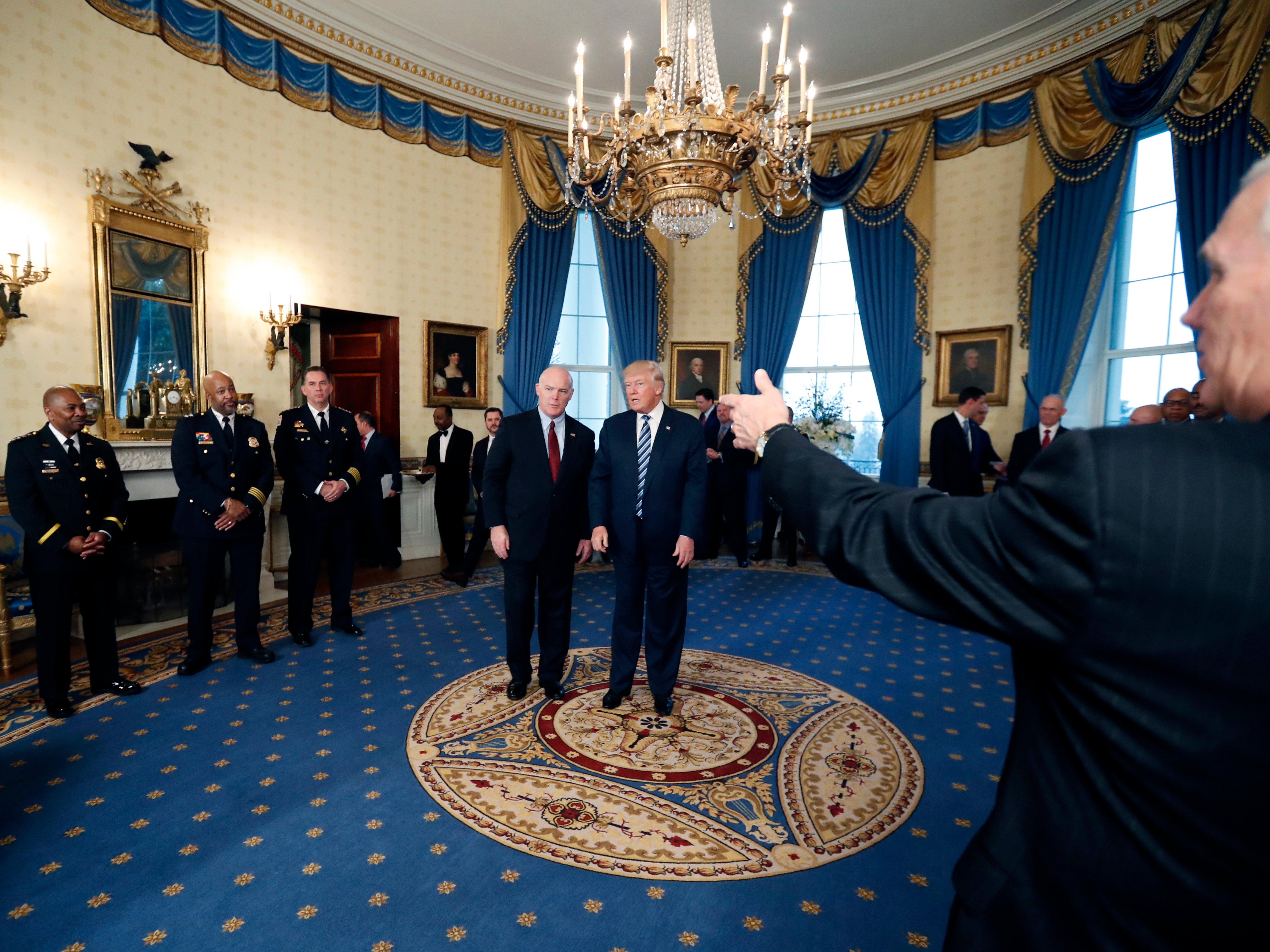 Also on the first floor is the Red Room, which serves as a parlor or sitting room for the president and dignitaries. 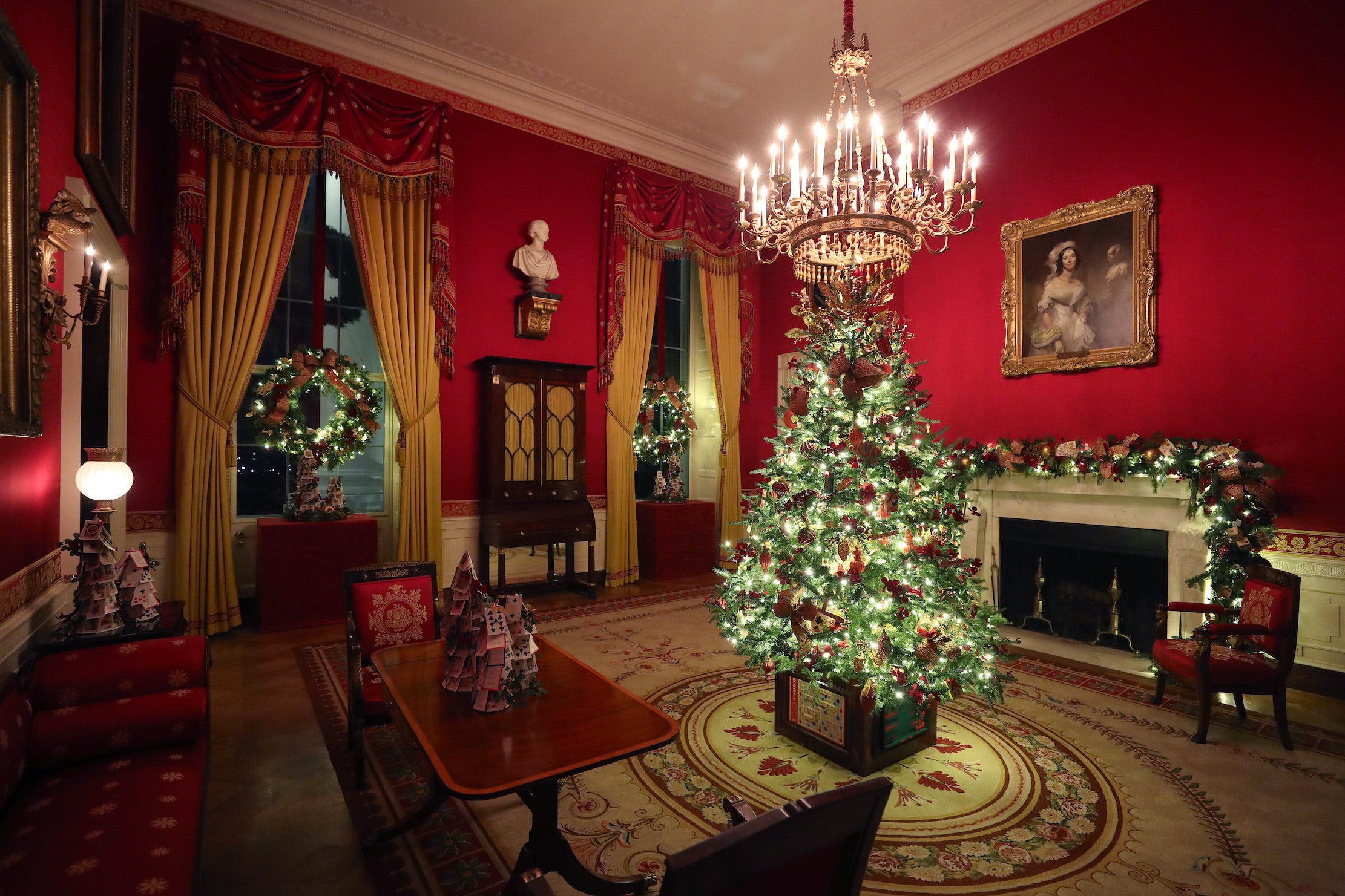 The East Room is the largest room in the Executive Residence. It is used for speeches, ceremonies, concerts, receptions, and dances. 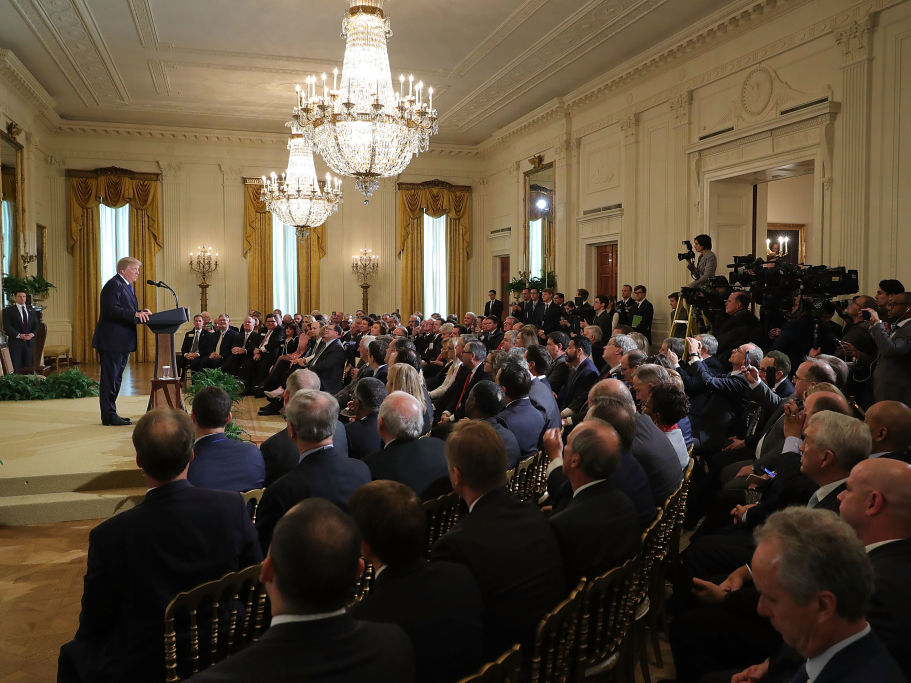 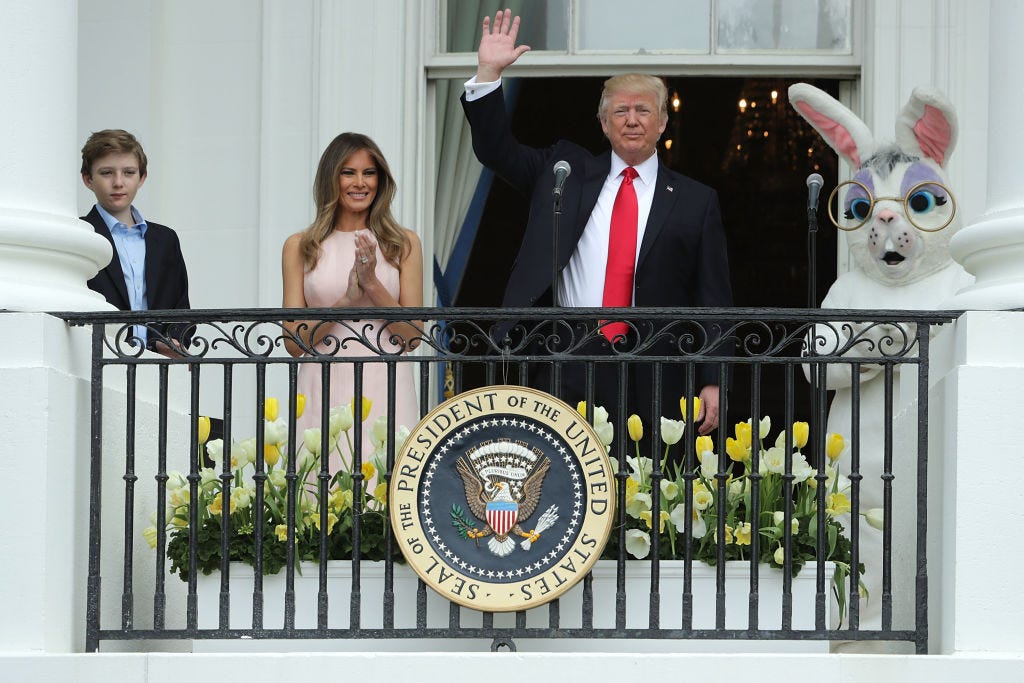 The East Wing of the White House contains the family theatre, where presidents and their families can see any movie they want at any time of the day — even before they come out in theatres. 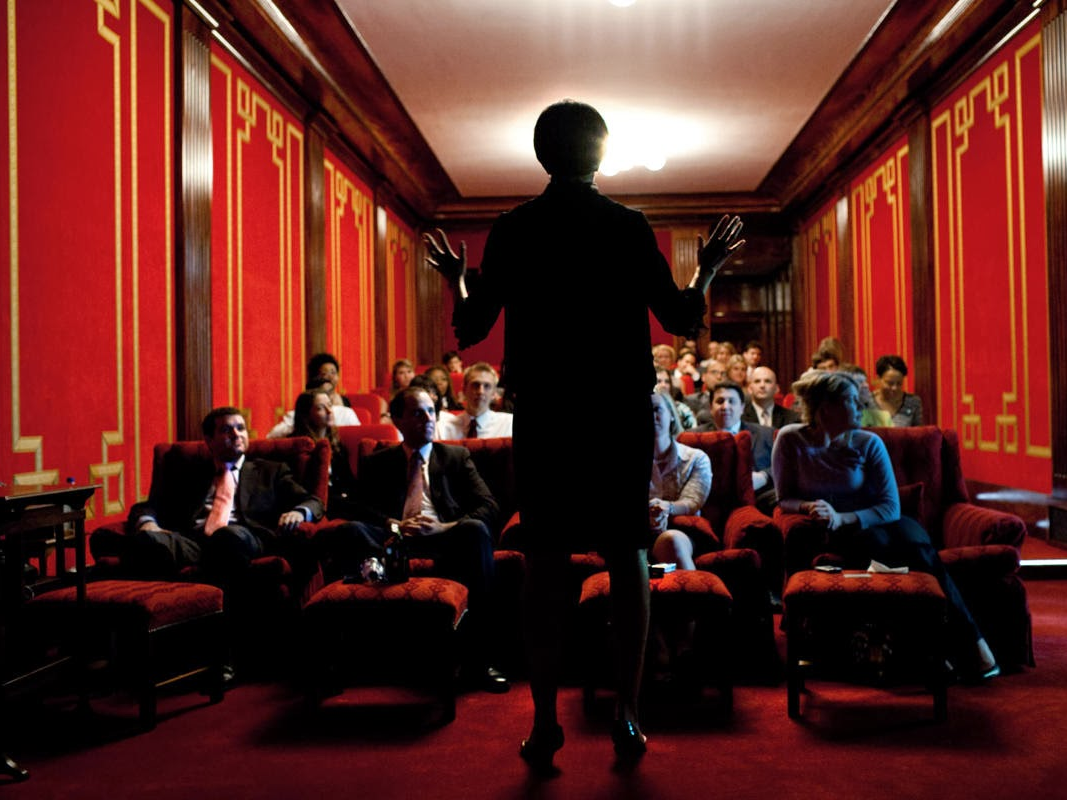 This is an updated version of an article originally written by Amanda Macias.