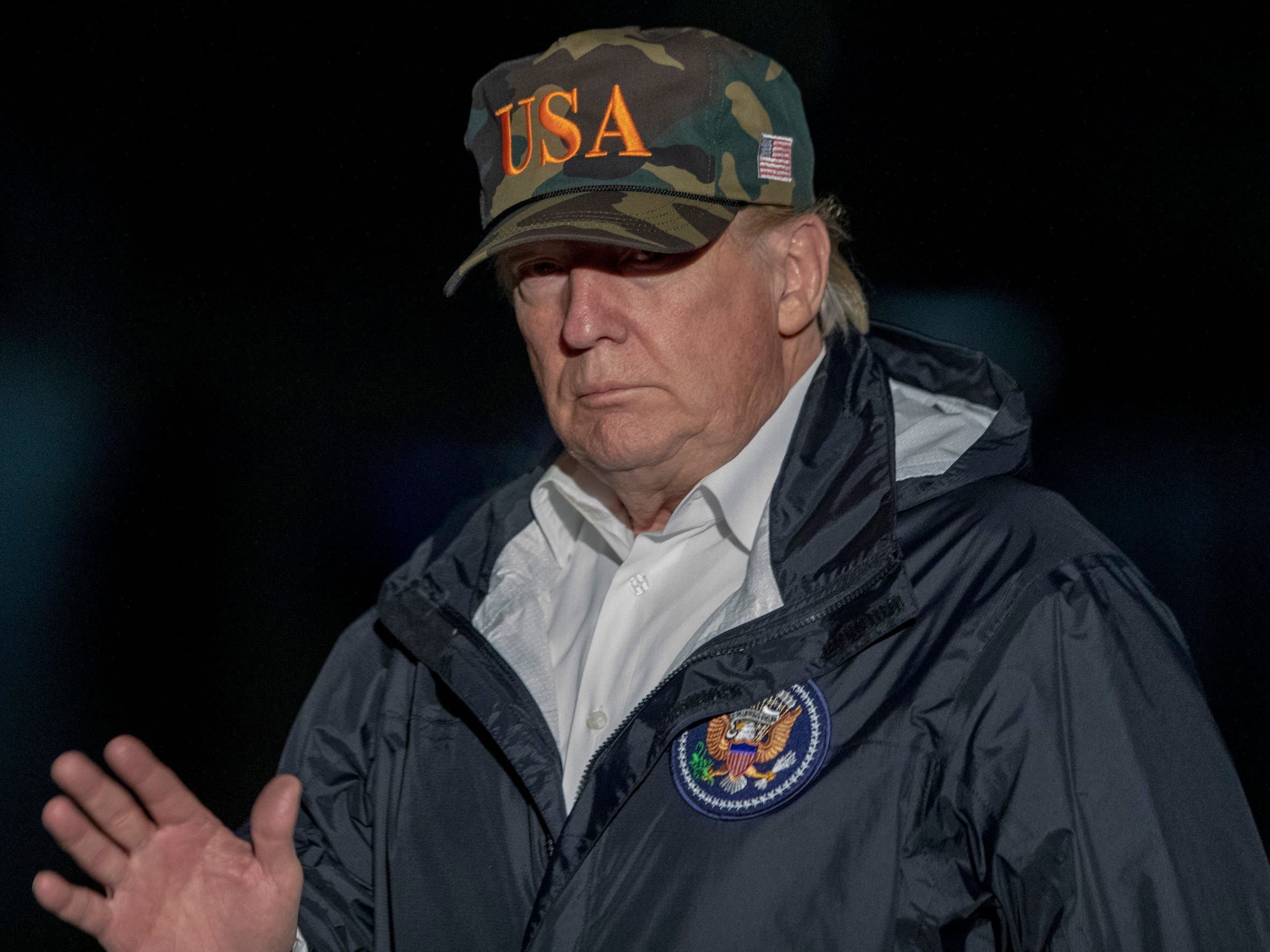 Tasos Katopodis-Pool/Getty ImagesU.S. President Donald Trump walks off Marine One on the South Lawn of the White House returning from California after viewing damage from that state’s wildfires on November 18, 2018 in Washington, DC.

Begnaud reported that the package would be the largest disaster aid in US history. He reported that Senate Minority Leader Chuck Schumer and Rep. Nydia Valesquez said a $US10 billion package was approved to rebuild the Puerto Rico Electric Power grid after its destruction in Hurricane Maria three years ago.

“Long before the hurricanes, Puerto Rico had a crumbling and dirty energy grid. After the storms utterly destroyed the grid, it created an opportunity to rebuild a cleaner, cheaper, and more resilient energy system but the Trump administration dithered and delayed and refused to deliver timely disaster aid for the people of Puerto Rico,” Schumer said in a statement. “I will work with the Puerto Rican community to see that these long overdue and desperately needed funds are put to use in a wise way

The announcement comes years after the hurricane destroyed much of the island and after Trump stalled on relief and even threw paper towels at the hurricane victims while visiting the battered island.

“There’s a lot of love in this room,” Trump said while throwing supplies at the group in a church in October 2017. “Great crowd.”

After facing criticism for the move, the president defended his actions.

“They had these beautiful, soft towels. Very good towels,” Trump told former Arkansas Gov. Mike Huckabee, on the new Trinity Broadcasting Network show “Huckabee.” “And I came in and there was a crowd of a lot of people. And they were screaming and they were loving everything. I was having fun, they were having fun. They said, ‘Throw ’em to me! Throw ’em to me Mr. President!'”

Trump then repeatedly claimed that the death count was far lower than reported and said the storm that tore through the island and killed an estimated 3,000 people wasn’t a “real catastrophe” like Hurricane Katrina.

Hurricane Maria doused the island with up to 38 inches of rain and brought winds up to 140 mph.

“What’s out there is total devastation,” San Juan Mayor Carmen YulÃ­n Cruz told ABC News at the time. “Total annihilation. People literally gasping for air. I personally have taken people out and put them in ambulances because their generator has run out.”

In 2018, Trump claimed that his response administration’s response was “unsung success” and “incredibly successful,” despite being criticised by many for not doing enough and neglecting the US territory as it tried to recover.

After news of the potential new relief packages, Rep. Valesquez released a statement suggesting that the move is political and noted how the announcement comes just a few weeks before the November presidential election.

“Puerto Rico has been desperate for federal assistance to modernise and upgrade its electrical grid for years especially since Hurricane Maria inflicted the longest blackout in modern history on the island. Yet, as is too often the case with Puerto Rico, the Trump administration delayed, dragged its feet, and resisted allocating these badly needed funds,” Velazquez wrote.