The White House is building a massive 'anti-climb' wall following protests. These photos show the evolution of White House fencing over the years 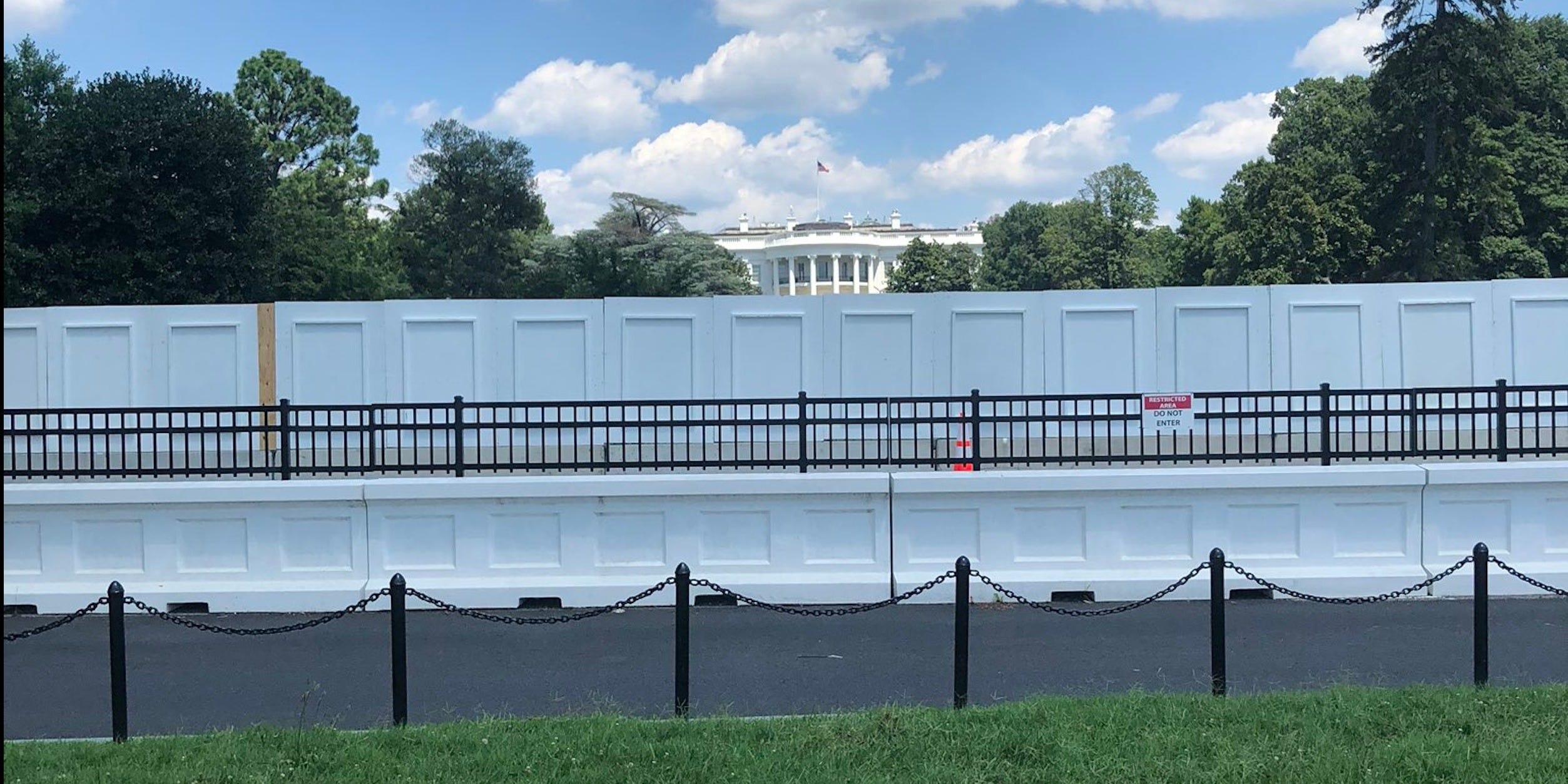 The days of leaning on the black barred fencing for a photo of the White House in the background are ending, with a massive “anti-climb” wall being built around the South Lawn.

Plans for a new perimeter with an “anti-climb” component have been in the works since July 2016, according to the White House history website.

However, several changes have been made to the area surrounding the White House following nationwide protests over the death of George Floyd, with various structures put in place to cordon off protesters.

A new photo of the wall went viral on Sunday, after Politico reporter Rebecca Rainey tweeted out a shot showing how much farther away pedestrians now have to remain from the edge of the South Lawn.

The view from H street pic.twitter.com/yLV2wl5OGK

Rainey also took a shot from the north side, where Lafayette Square is now closed off via a variety of obstacles.

It remains unclear which aspects of the new wall stem from the Obama-era plan to reinforce the perimeter and which are directly in response to the protests.

The White House declined to comment on the record to Insider.

Katie Liming, a spokeswoman for the National Parks Service, told Insider in an email that the new wall is a “white temporary fence” that is part of a broader “fence replacement project.”

“The National Park Service and United States Secret Service began construction on a new White House fence in July 2019. Construction recently began on the south portion of the fence.”

A new perimeter was decided upon in the summer of 2016 following the 2014 White House intrusion, when a man was able to climb over the north fence and make it to the front door with a knife before being stopped by an off-duty security officer.

This is what the White House fence situation has looked like over the years: 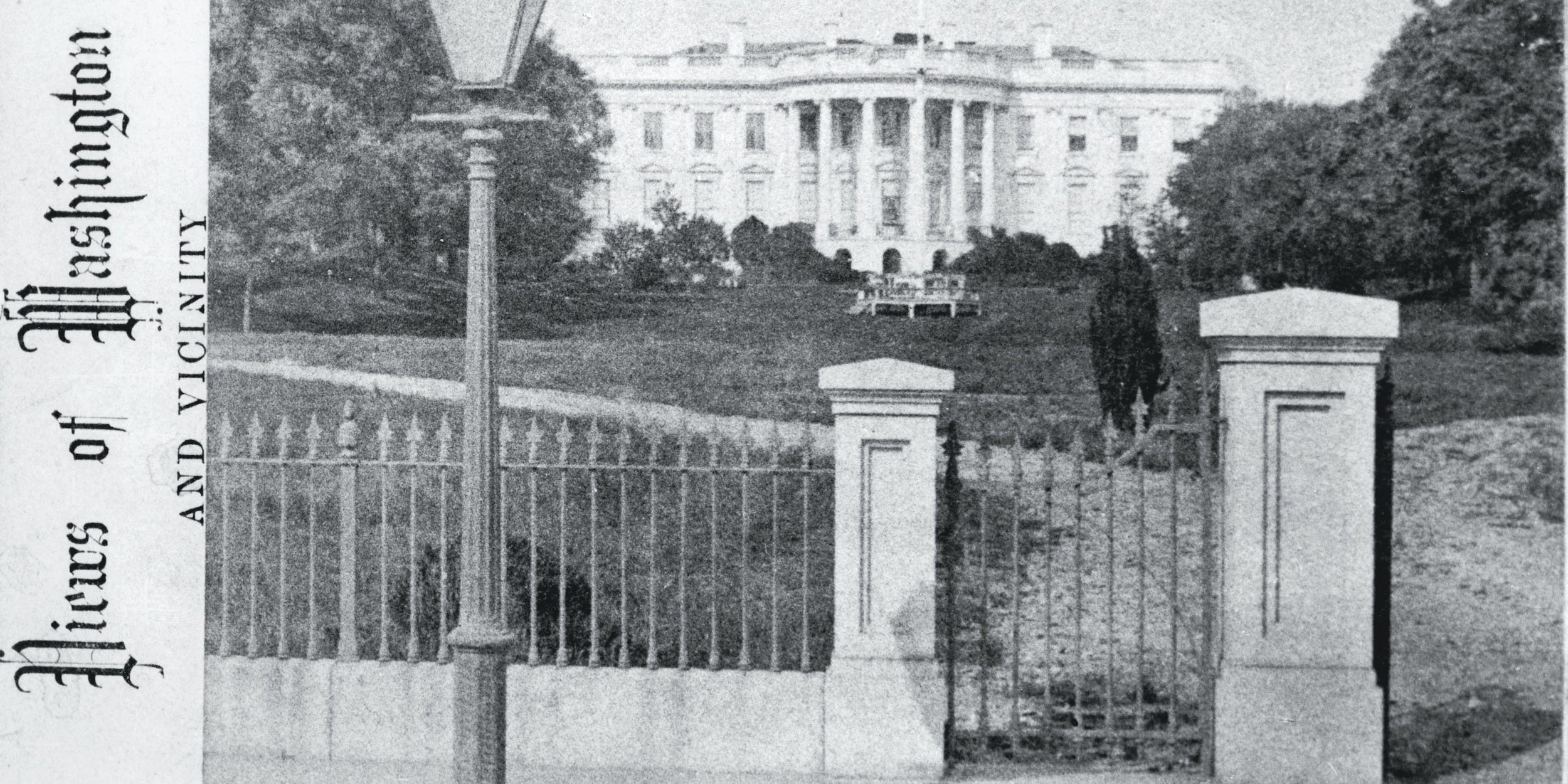 Abraham Lincoln famously hosted more than 2,000 visitors following his inauguration in 1861, with accounts at the time remarking upon the line getting so out of hand that many left in frustration.

Several visitors also reportedly lost their coats and other belongings in the crowded reception area.

Back then, you could quite literally walk right up to the White House from the south perimeter. 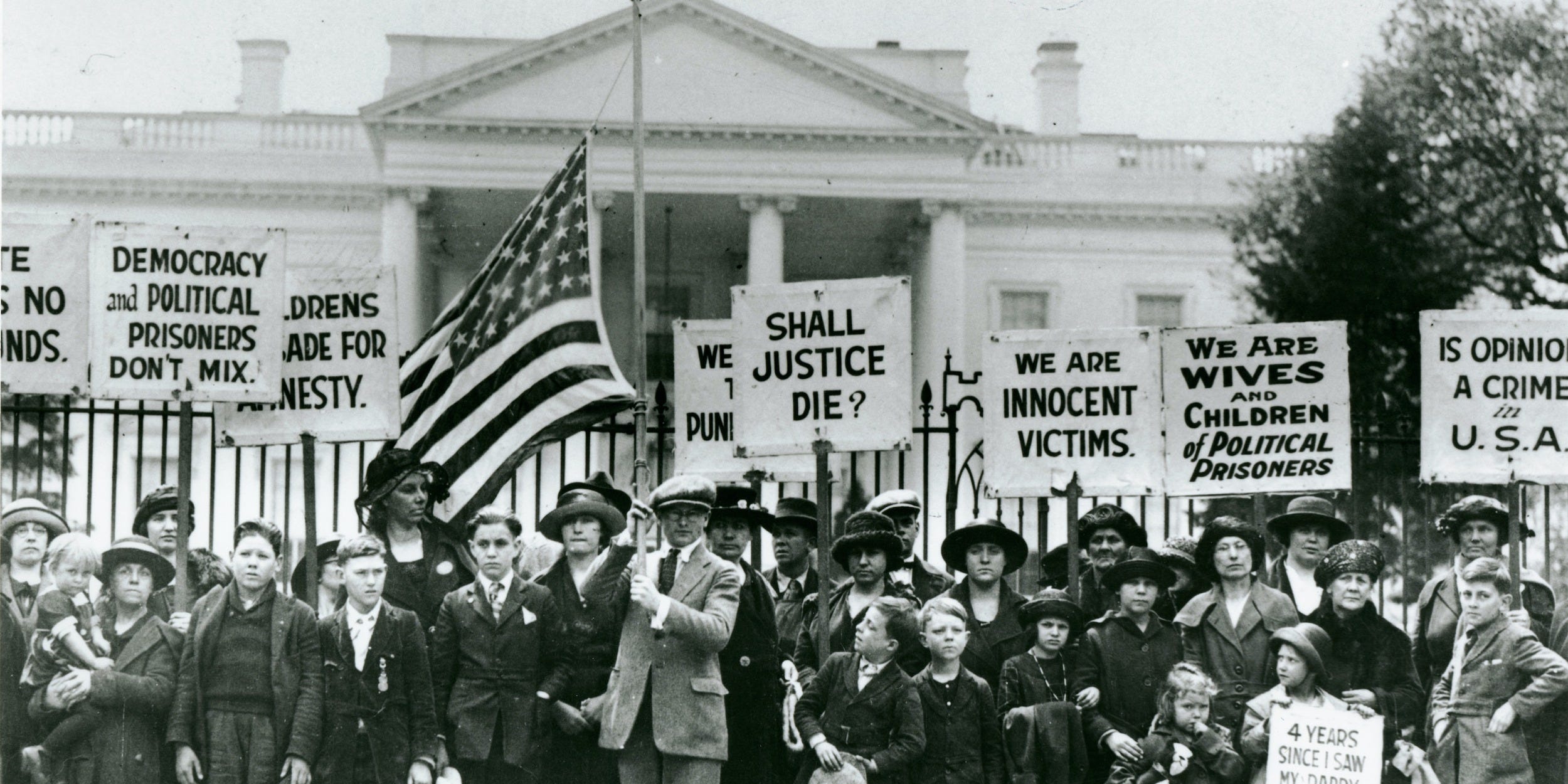 On the north side, protesters used to be able to get much closer to the White House than Lafayette Square.

In this 1922 photo, families of political dissidents convicted under the Espionage Act of 1917 protest against the Warren G. Harding administration. 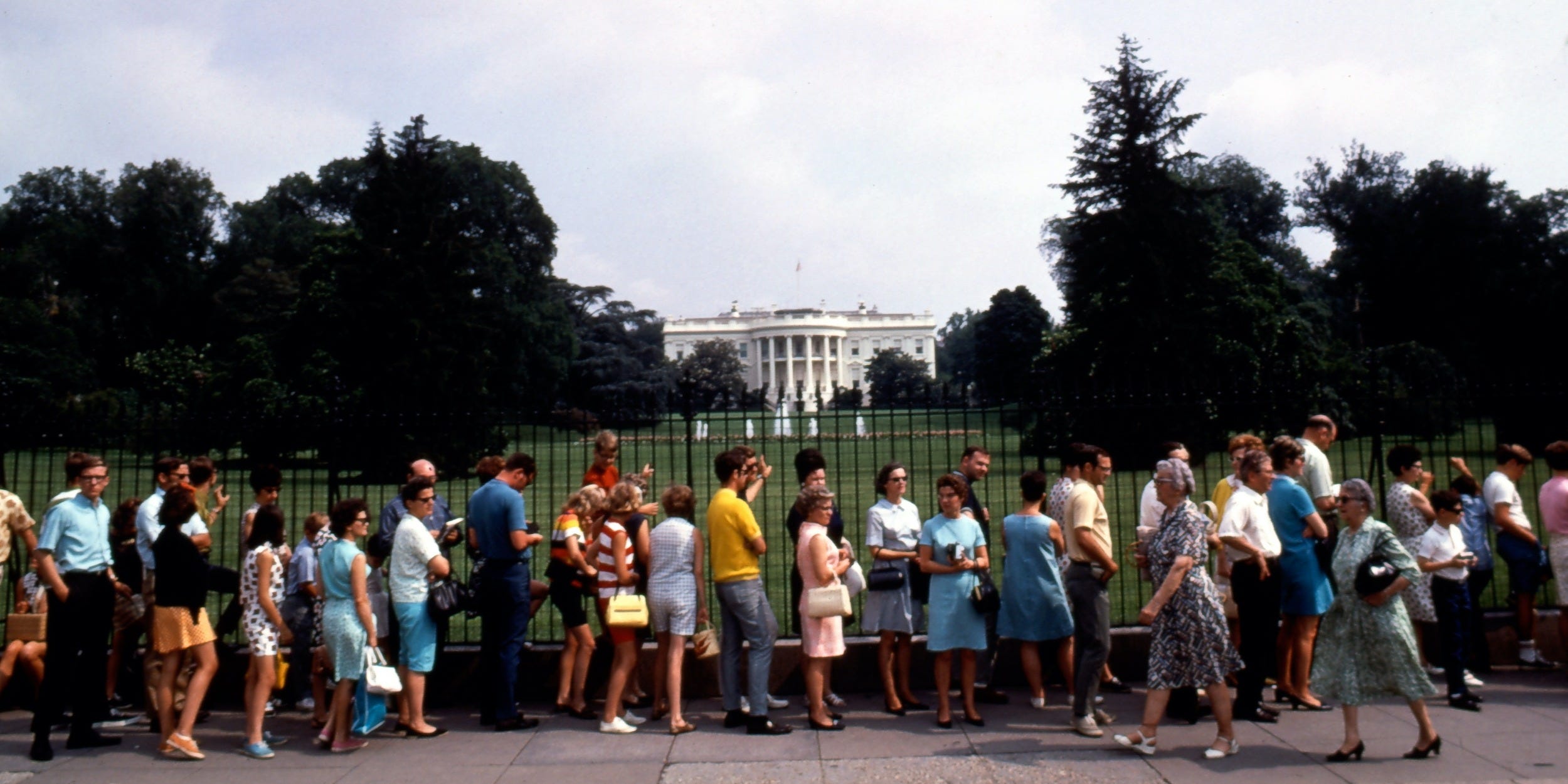 J. Fulton/National Geographic Service via the White House Historical AssociationVisitors gather around the south fence in 1965

The spiky black fence on the South Lawn familiar to most DC tourists was in place by the mid-1960s, allowing for a scenic view of the White House while maintaining an ostensibly difficult perimeter to climb. 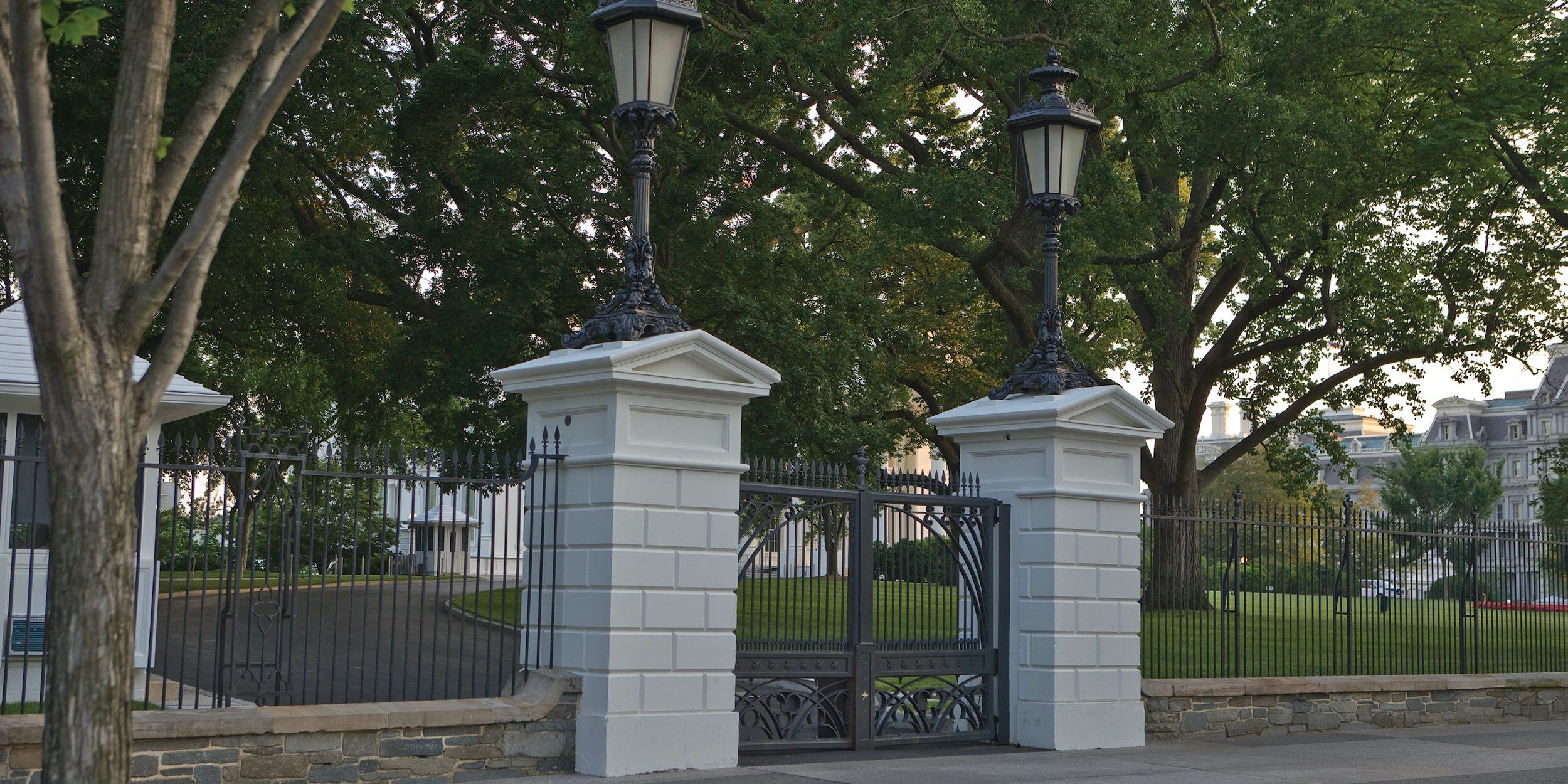 Following the turbulence of the 1960s and protests against the Vietnam War, a beefed up secure entrance was installed along the North Lawn in 1972.

The aesthetics of the gate were intended to mimic those of the 19th Century iron gates, but with more security capabilities, according to the White House Historical Association. 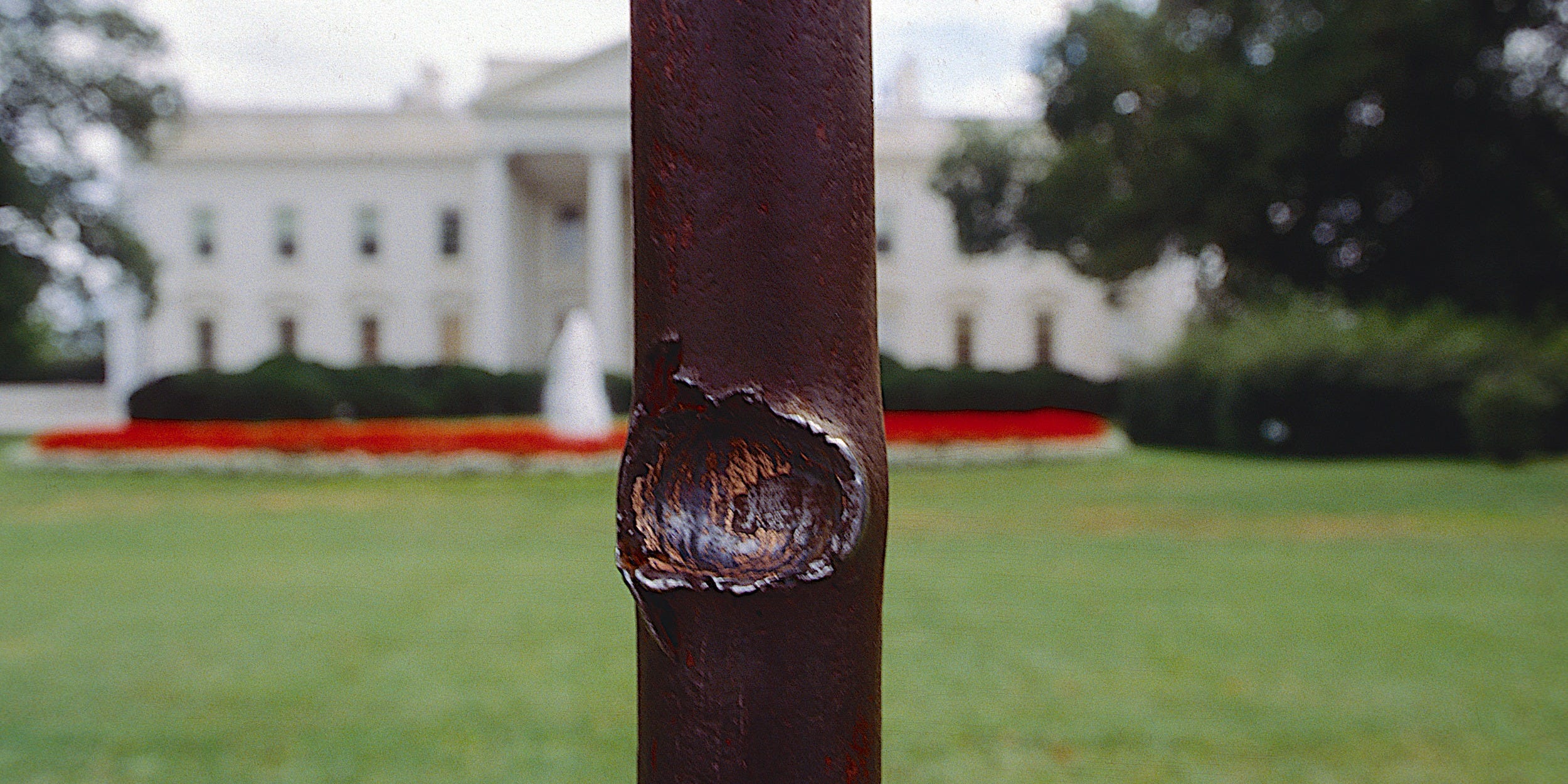 Mark Reinstein/Corbis via Getty ImagesBullet gouge in the fence at the front of the White House. Caused by one of the 29 rounds fired from an SKS rifle by Francisco Martin Duran on October, 29, 1994.

When a gunman fired 29 shots at the White House from the north side in 1994, security upgrades were put in place under then-President Bill Clinton.

The shooter, Francisco Martin Duran, was sentenced to 40 years in prison. 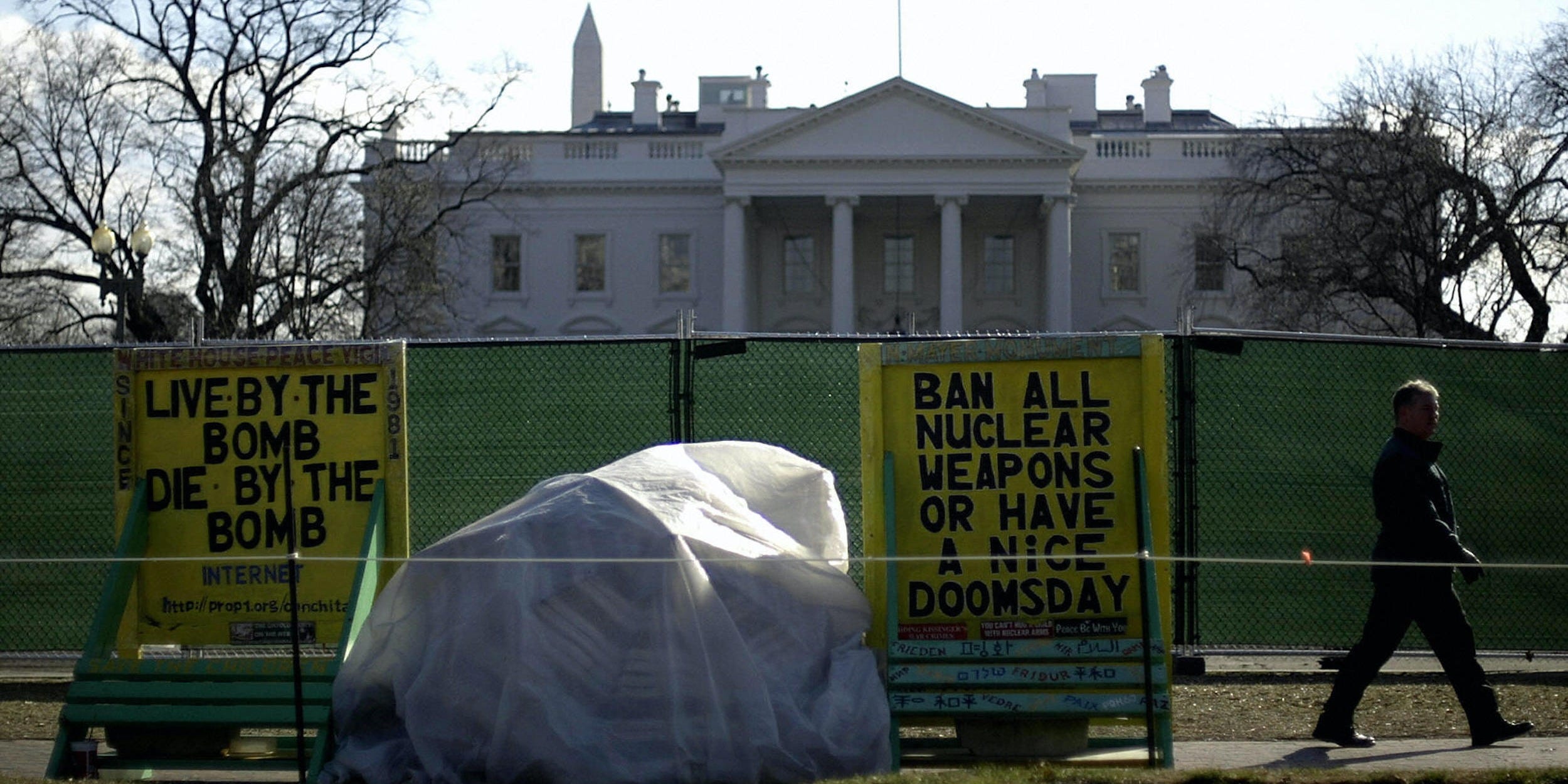 Tim Sloan/AFP via Getty ImagesConstruction begins in 2004 on a new, security sensitive pedestrian plaza, 900 feet long and paved with a crushed rock material that will replace the asphalt and lane markings of Pennsylvania Ave in front of the White House.

In Nov. 2004, it was reopened with upgraded security for pedestrian and bicycle traffic between Lafayette Park and the White House fence.

Retractable bollards, new Secret Service checkpoints, and 85 new Elm trees were installed as part of a $US26.1 million project. 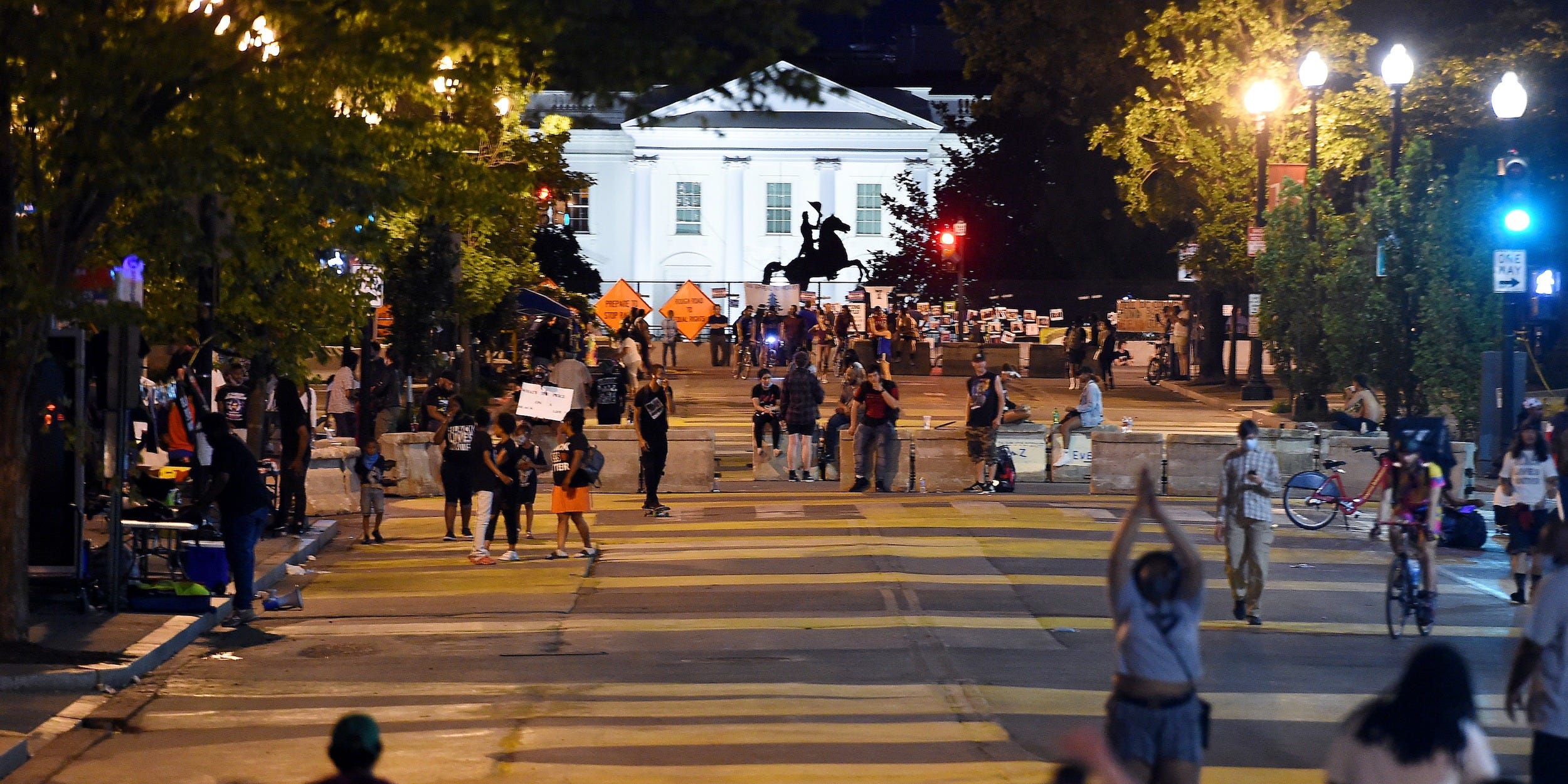 OLIVIER DOULIERY/AFP via Getty ImagesProtesters gather at Black Lives Matter Plaza in front of the White House and the equestrian statue of former US President General Andrew Jackson protected by a fence and concrete blocks in Washington, DC on June 26, 2020.

The most significant changes to the White House perimeter have come amid the protests surrounding the death of George Floyd in 2020.

Throughout June and going into July, several fortifications were installed around the White House and particularly on the south side as protesters clashed with Park Police.