Eerie photos show travellers quarantined in motels, detention centres, and cruise ships due to the coronavirus 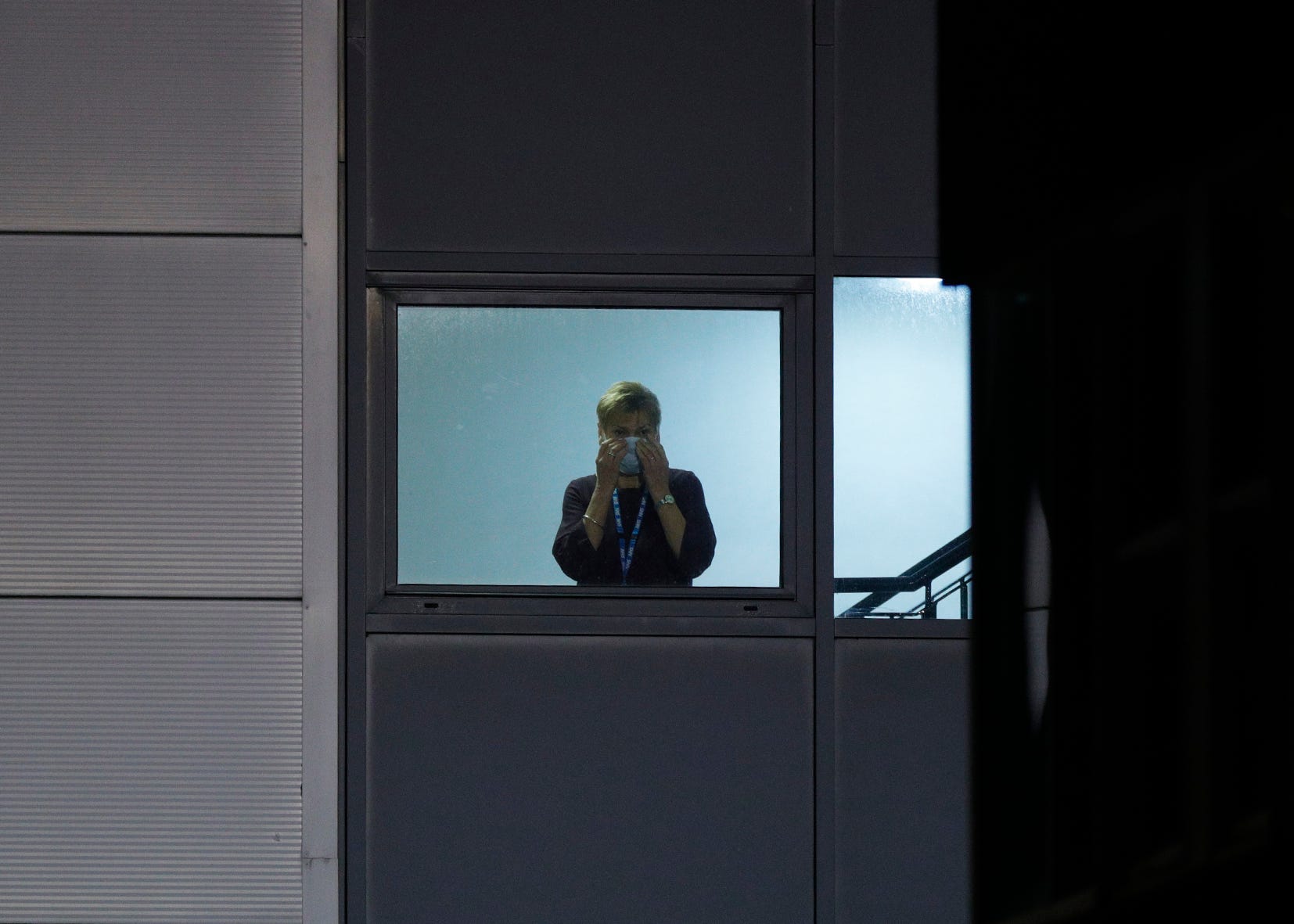 Quarantines have been around since the 14th century, but China has implemented the largest one in human history.

The country closed off the Hubei province in response to a deadly coronavirus that has killed at least 1,370 people and infected more than 60,000. The quarantine effectively places around 50 million people on lockdown as part of the country’s efforts to stop the virus’ spread.

As more coronavirus cases are reported outside China, other countries have followed suit by quarantining citizens who have recently returned from Wuhan, the central Chinese city where outbreak began.

Nations including Algeria, Australia, Bangladesh, Canada, India, Indonesia, Japan, Italy, France, the United States, and the United Kingdom have either evacuated citizens or plan to do so in the coming days. The types of accommodations for these evacuees vary widely. The United States and Italy have placed evacuees in military bases, while Canada has put them up in a motel.

Here’s what quarantine facilities around the world look like.

The city of Wuhan, where the outbreak originated, has turned into a ghost town. 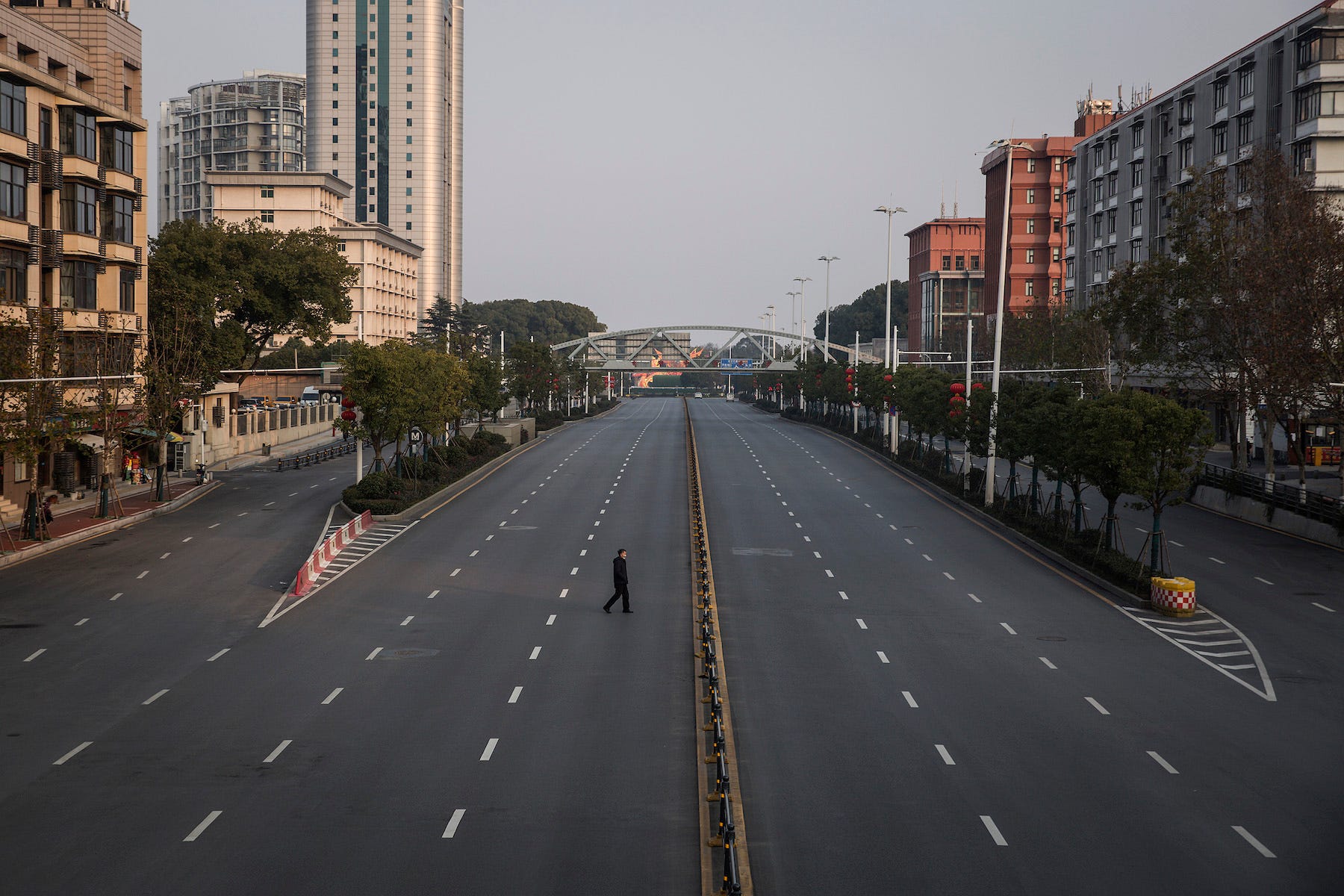 Wuhan has been quarantined since January 23. All of the city’s public transportation – including buses, metros, and ferries – has been halted. Trains and aeroplanes coming into and out of the city are also shut down, and roadblocks were installed to keep taxis and private cars from exiting.

Wuhan’s 11 million residents were told not to leave the city, barring special circumstances. People there have been forced to stockpile food and many of the streets are deserted.

Other parts of the Hubei province are eerily empty as well. China has imposed travel restrictions on the Hubei province, including Wuhan.

Huanggang, a city of about 7.5 million people, placed its urban core under lockdown on January 23, closing subway and train stations as well as theatres and internet cafés. Many additional cities followed suit with their own travel restrictions.

The US is quarantining hundreds of citizens on military bases. 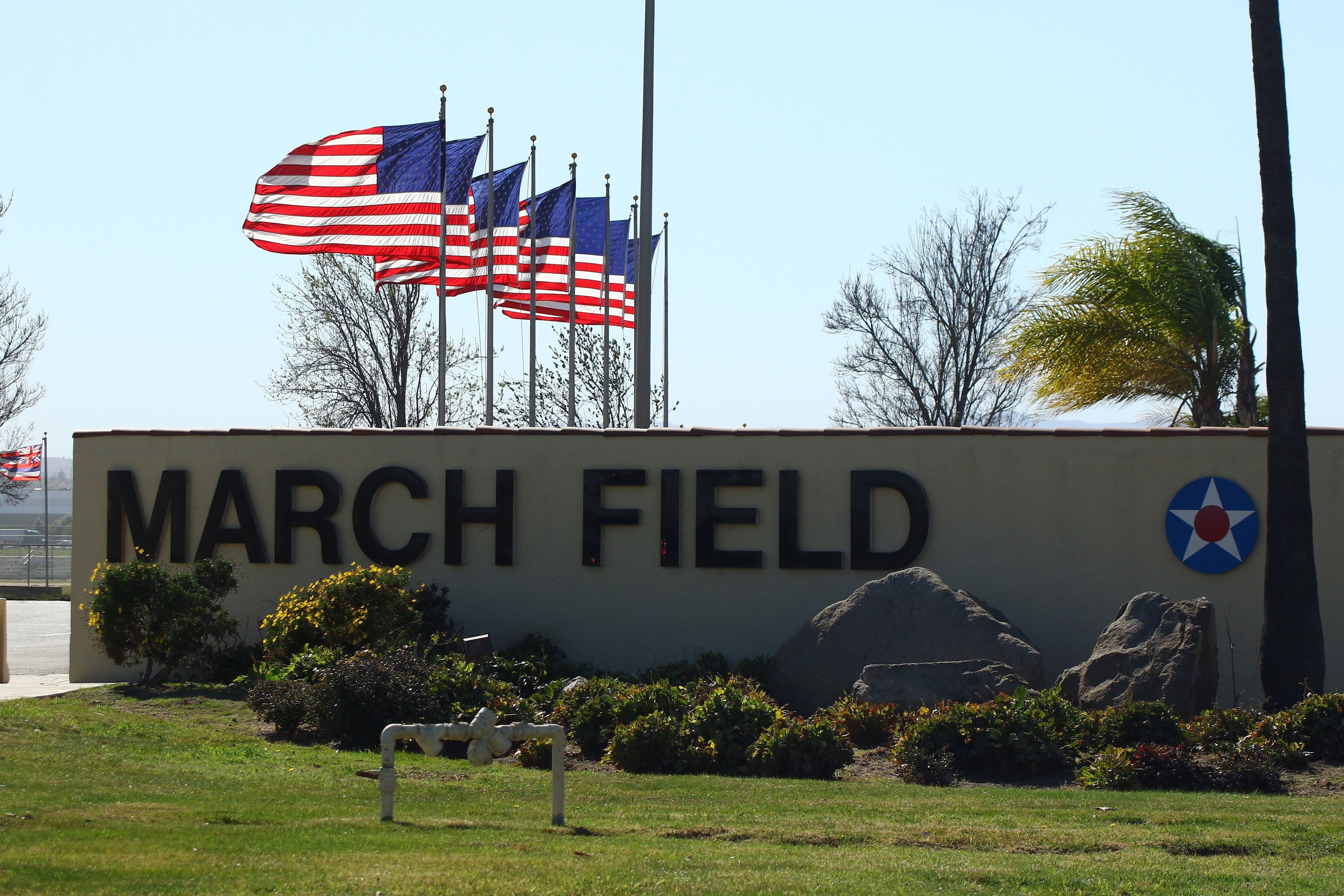 As of February 2, US citizens returning home who have been in the Hubei province within the past 14 days can be quarantined for up to two weeks.

On January 29, a flight carrying nearly 200 Americans from Wuhan landed at the March Air Reserve Base in Riverside, California. The evacuees were placed under a 14-day quarantine in the base’s living quarters. None of them tested positive for the virus, and the evacuees were released on Tuesday, marking the first successful US quarantine in nearly 60 years.

As of Thursday, more than 600 people who returned to the US on chartered flights from Wuhan remained under federal quarantine. Two people under quarantine in San Diego tested positive for the virus, as did one in San Antonio.

Thousands of people have been quarantined on a Japanese cruise liner after 21 passengers tested positive for the coronavirus. 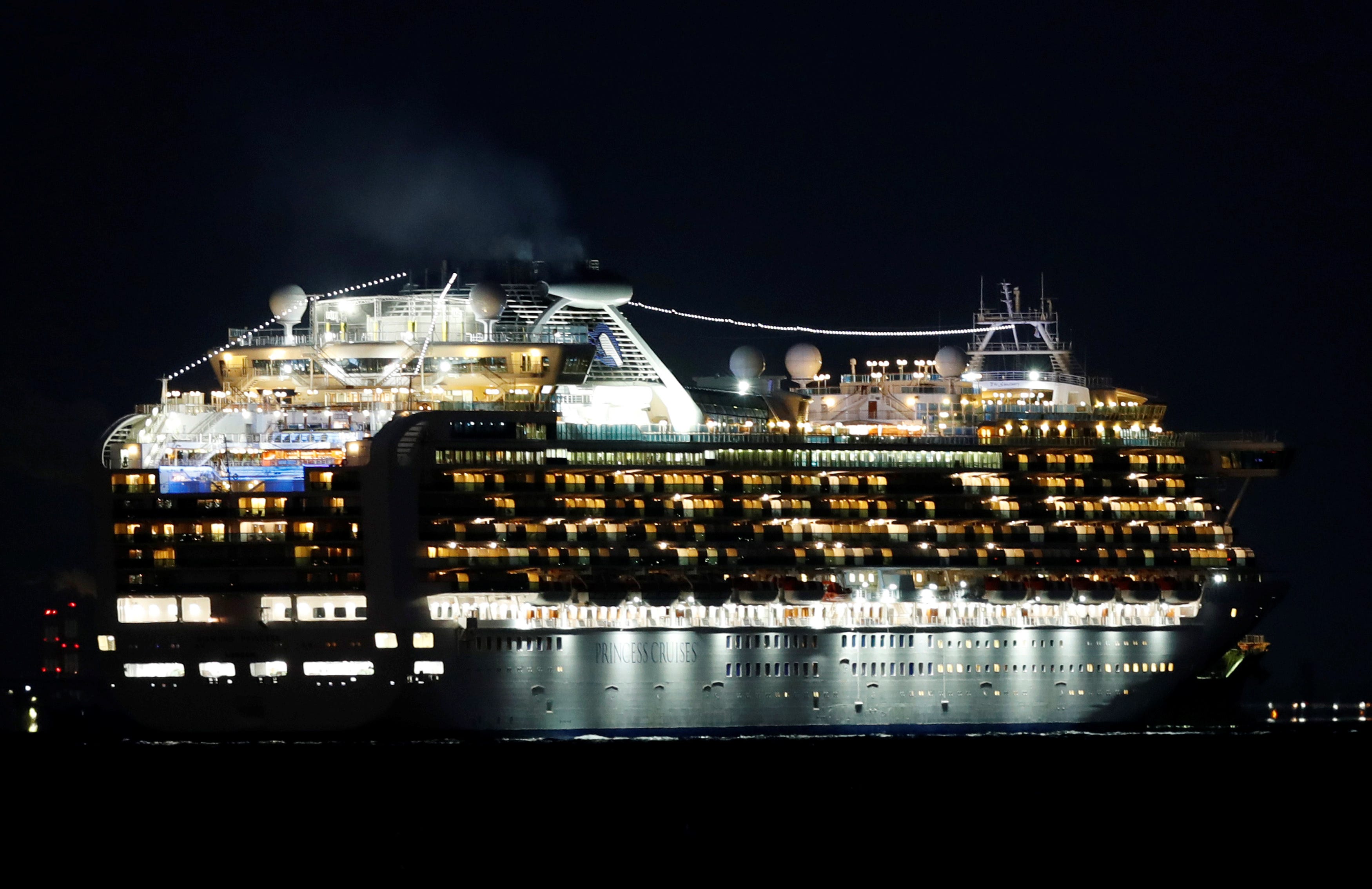 The cruise ship, known as the Diamond Princess, is being quarantined near Tokyo. There are 2,666 guests and 1,045 crew members on board.

At least 174 cases of the virus have been reported on the ship so far – the largest number of cases outside mainland China.

Passengers have been ordered to stay inside their cabins. 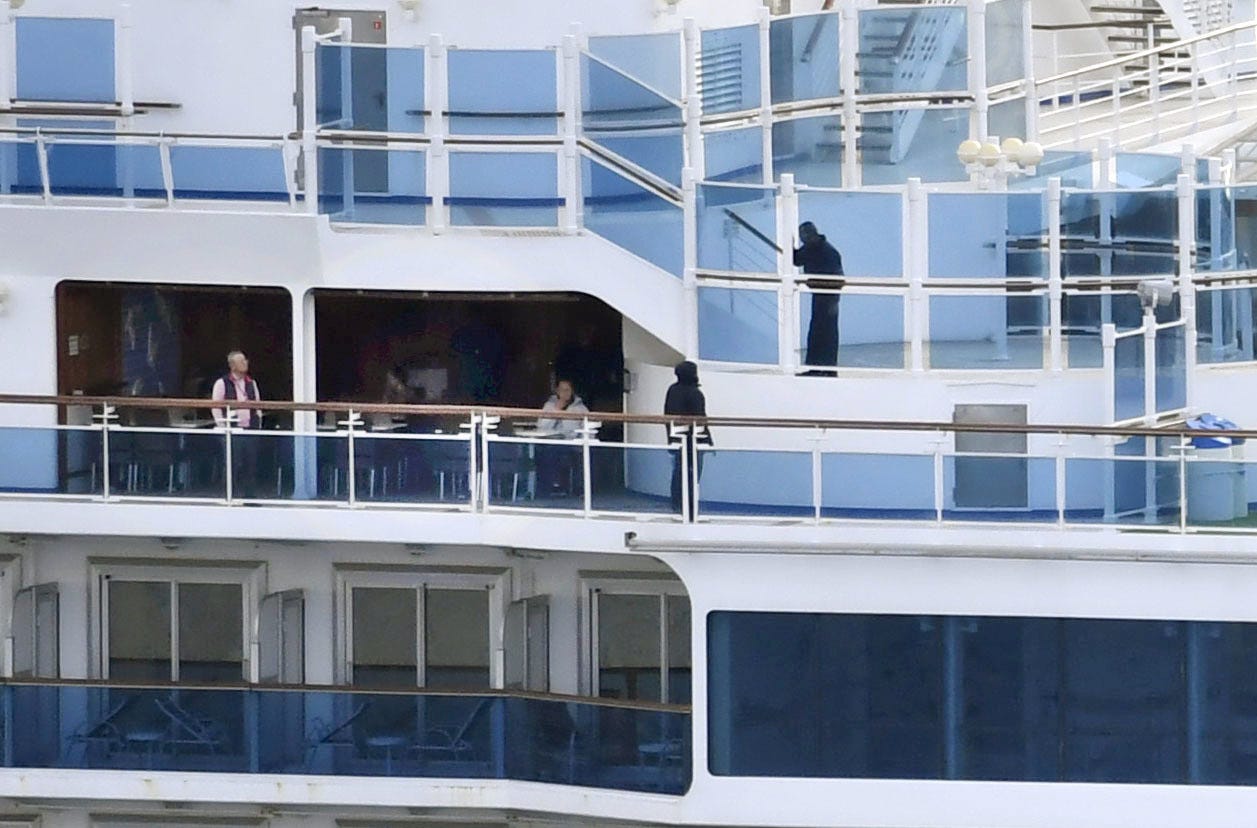 Kyodo/ReutersPassengers on board the Diamond Princess on February 4, 2020.

Many of the cheaper rooms don’t have windows or balconies. Passengers with balconies have been leaning across them to talk to fellow travellers, The Japan Times reported.

The ship’s restaurants and cafes are closed, so passengers are receiving room service. 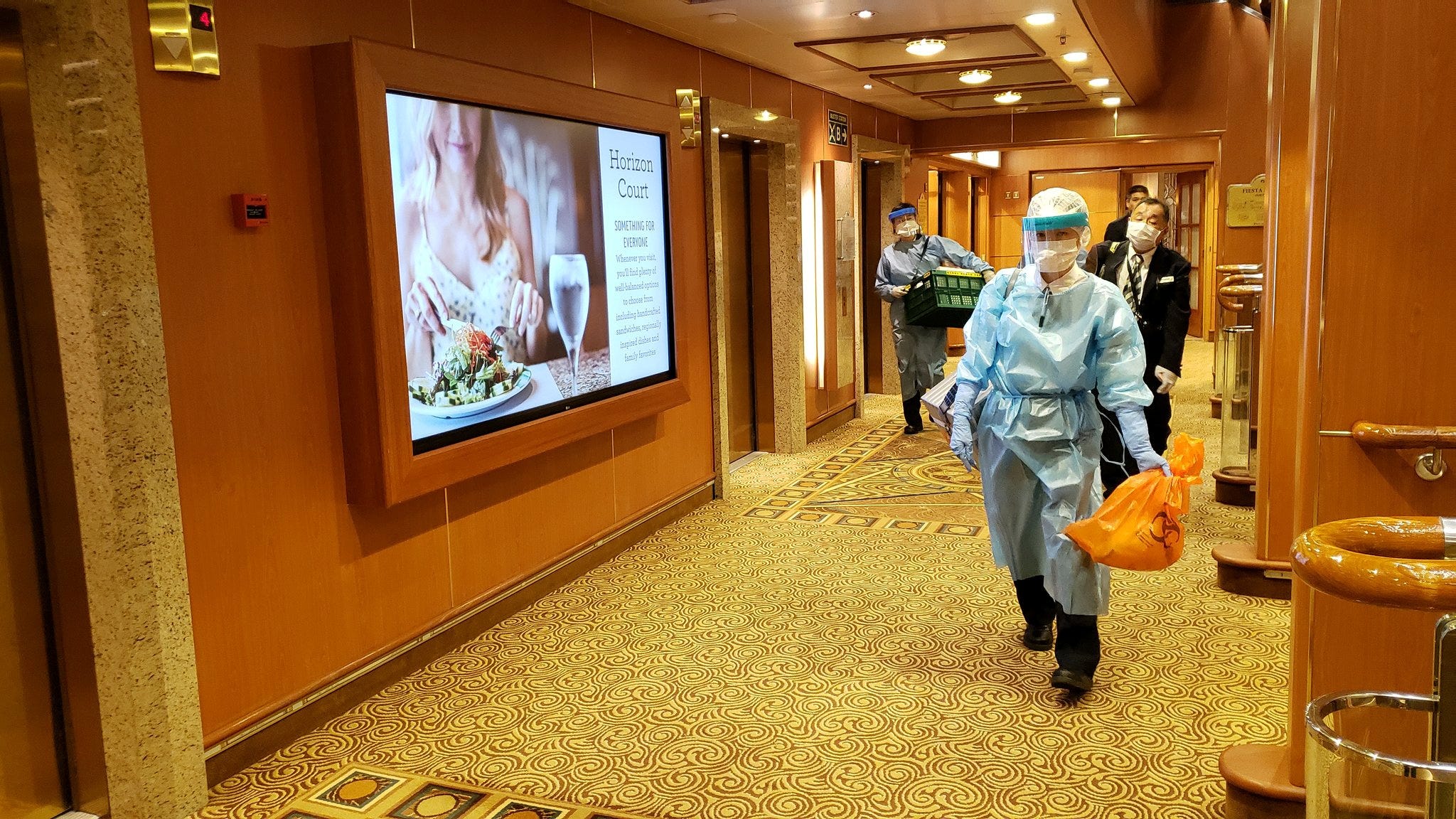 Twitter/@DAXA_TW/Getty ImagesA man on the sixth deck of the Diamond Princess in Yokohama on February 4, 2020.

The ship’s auditorium and casino are closed as well. Passengers have tweeted photos of their meals, which include boiled eggs, fruit, and cereal for breakfast and bread and ham for lunch.

“Cruise lines take public health issues very seriously – I’ve actually been quarantined myself on Diamond Princess in Japan,” Liz Jarvis, editor of Cruise International Magazine, told Business Insider, referring to a time when she fell ill. “I know that passenger safety is absolutely paramount to all the team on board.”

Italy quarantined people at a military base in Rome. 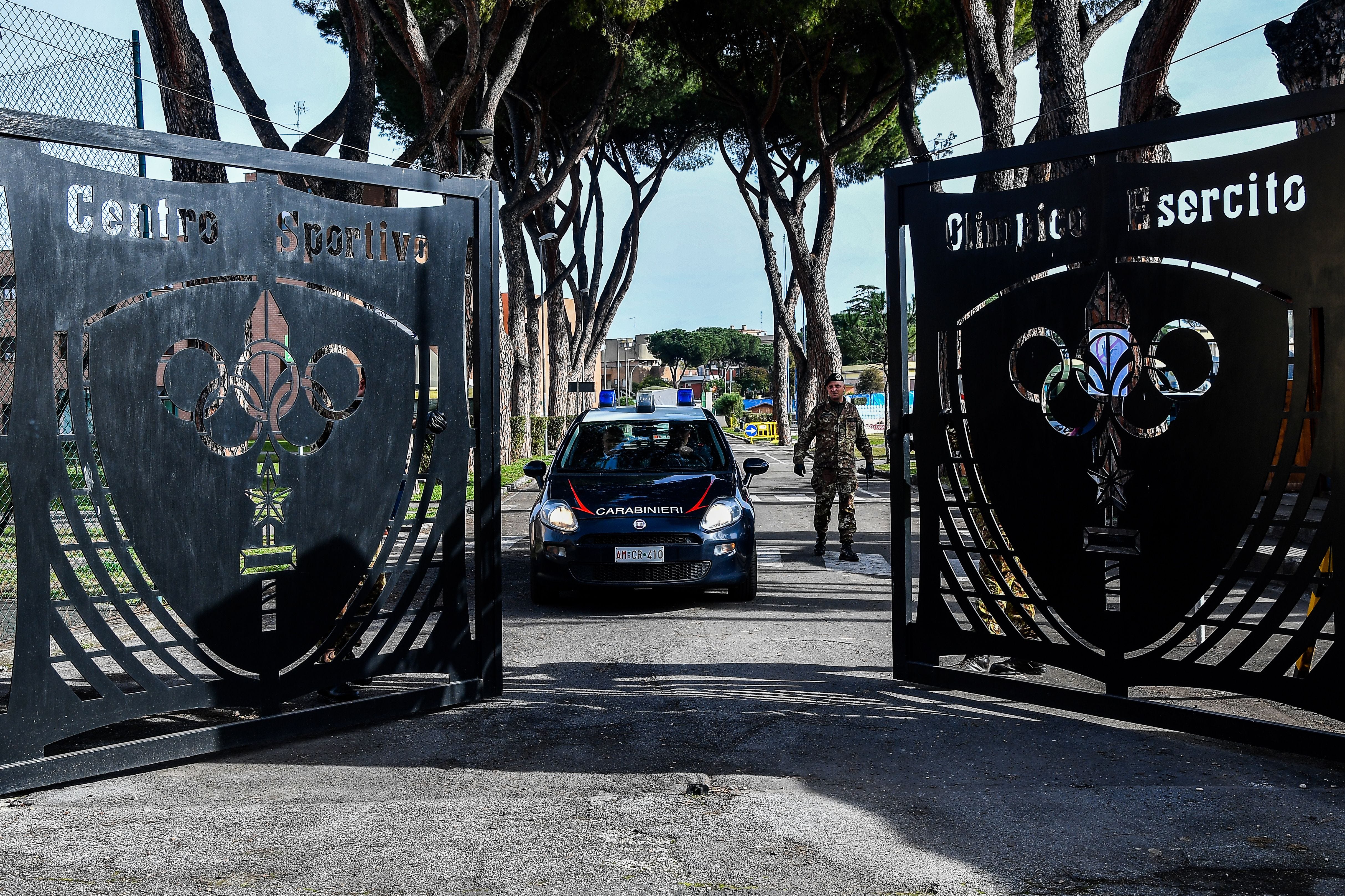 A plane evacuated 56 Italian nationals – including six children – from Wuhan on February 2, then landed in Rome the following morning. One passenger was prohibited from boarding after showing signs of a fever. A handful of other Italian nationals chose not to board, The Local reported.

The evacuees were quarantined at the Cecchignola military base in southern Rome.

Canada is quarantining people in a motel, where they will receive mental-health services. 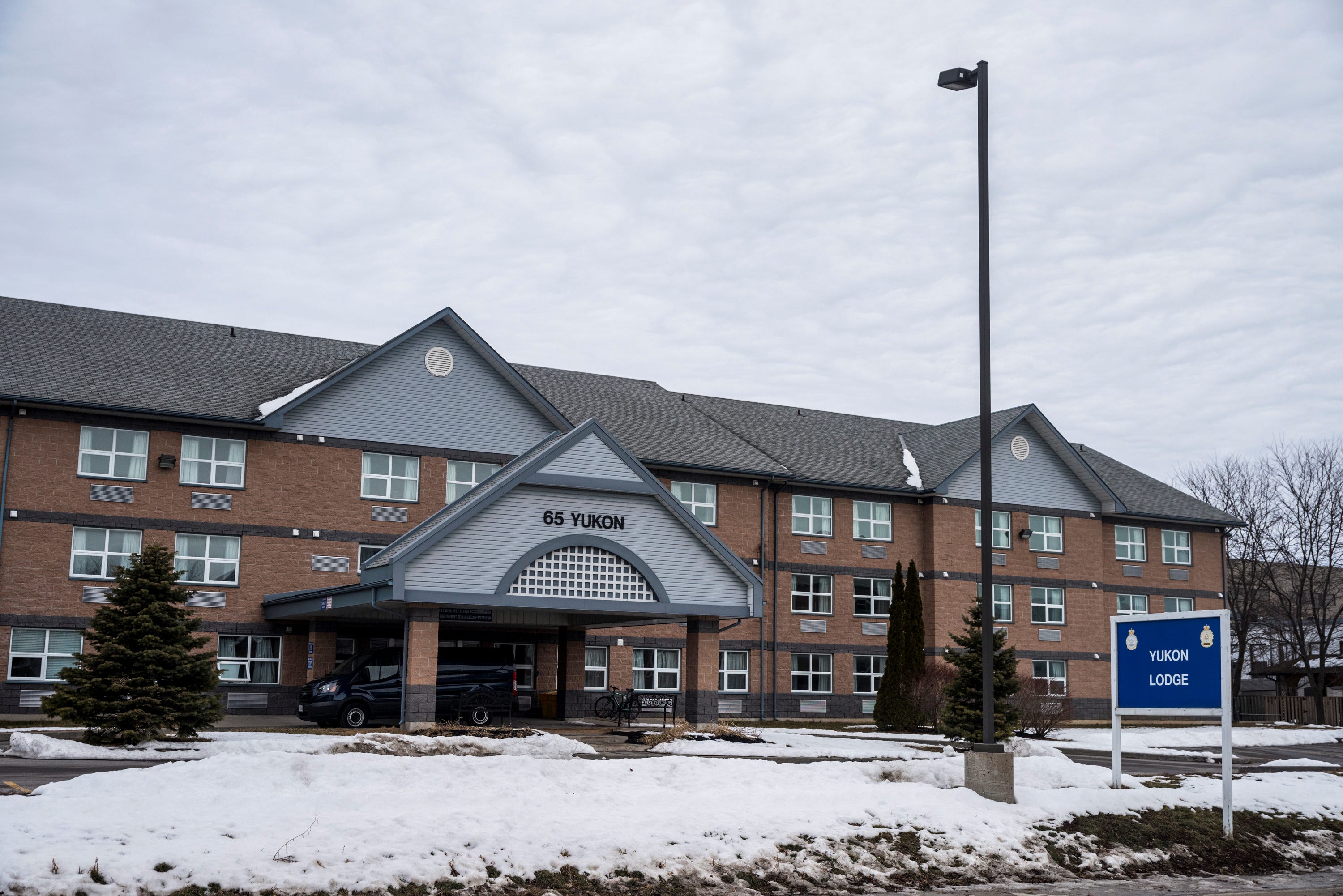 Around 215 Canadians are quarantined at the Yukon Lodge, a motel located on an air force base in Trenton, Ontario. The motel has 290 rooms and evacuees are spread out across three buildings. Their first hot meal was chicken and potatoes, the Globe and Mail reported.

Canada’s federal health minister, Patty Hajdu, told The Canadian Press on February 3 that the government will offer mental-health services for those under quarantine.

UK evacuees were quarantined at a hospital in northwest England, near Liverpool. On January 31, 83 British citizens were evacuated from Wuhan and flown to Oxfordshire, England. The plane was supposed to hold 120, but some people missed the flight over confusion about who could board and how they would get to the airport given the transportation ban in Wuhan.

The passengers were quarantined at the Arrowe Park Hospital in Wirral shortly after landing. None of them have tested positive for the virus so far.

A second flight carrying 11 British citizens took off on February 2. The passengers weren’t told that an infected patient was on board. 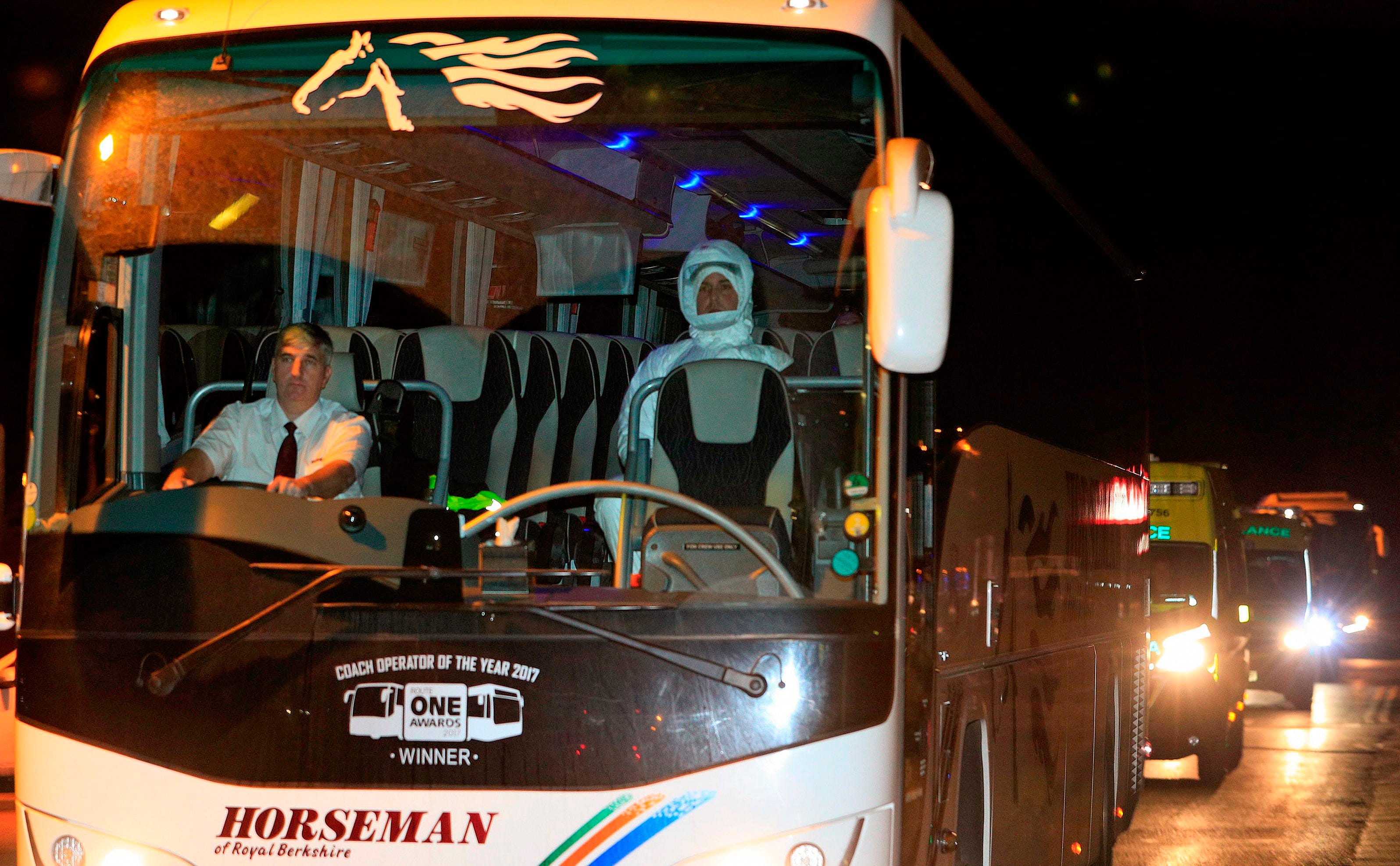 The citizens were flown from Wuhan on a French-chartered flight with evacuees from 30 countries. One patient on the flight, a Belgian national, tested positive for the virus, but British passengers weren’t informed, The Guardian reported.

The passengers were also taken to the Arrowe Park Hospital.

Around 180 French passengers were quarantined at a seaside resort with volleyball courts, art classes, and a concierge service. 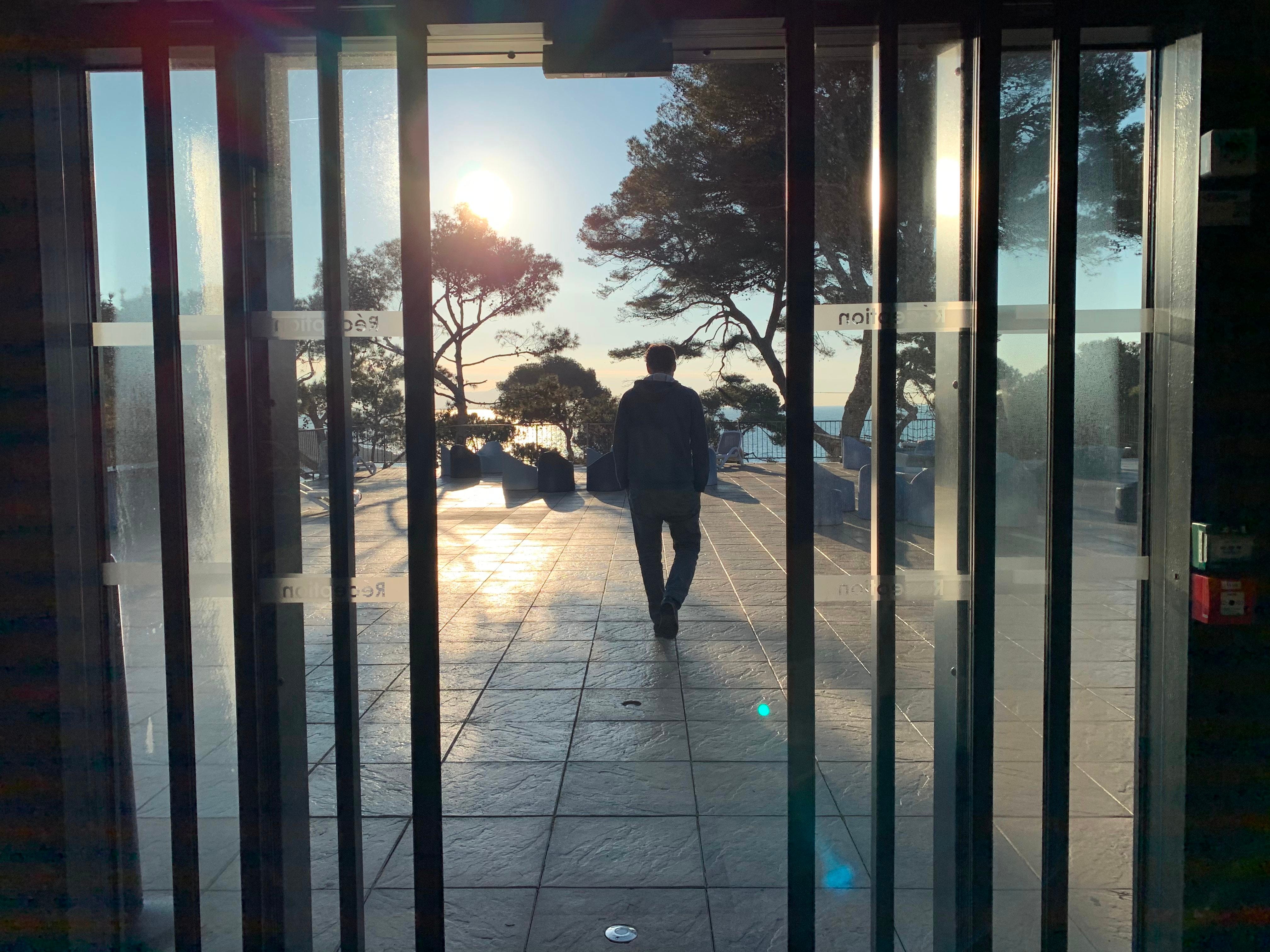 Hector Retamal/AFP/Getty ImagesA man walks through The Vacanciel Holiday Resort in Carry-le-Rouet, near Marseille, on February 1, 2020.

The passengers were quarantined at the Vacanciel Holiday Resort in Carry-Le-Rouet, near Marseille, on February 1. Agence France-Presse reported that the passengers consist mostly of French nationals and their Chinese spouses.

“There are worse places,” Marc Ziltman, a senior Red Cross official at the resort, told AFP. “The site needs to be as agreeable as possible because people are going to pass 14 days there.”

Around 3,600 passengers and crew members were trapped on the World Dream cruise ship at a port in Hong Kong. They disembarked on February 9. The Dream Cruises line learned on February 3 that the ship had previously carried eight infected passengers, who tested positive for the coronavirus after they disembarked on January 24.

The ship has sailed four times since then, and some passengers on those subsequent trips might have been on board at the same time as the sick passengers, the South China Morning Post reported.

On February 4, the ship’s crew sealed off the cabins that previously held the infected passengers. A day later, 3,600 people were quarantined on the ship at a port in Hong Kong.

Passengers were allowed to disembark on Sunday after the ship’s crew members tested negative for the virus.

Before the quarantine was lifted, passengers on the World Dream entertained themselves by watching movies or playing games. Miguel Candela/Echoes Wire/Barcroft Media/Getty ImagesPassengers look out from their rooms while the World Dream cruiser is docked at the Kai Tak Cruise Terminal in Hong Kong on February 5, 2020.

The passengers hailed from multiple countries, including the UK, Australia, and Canada. Some people passed the time on board by playing mahjong, a tile-based game similar to rummy.

Three days before the quarantine ended, a passenger told the South China Morning Post that some travellers’ medication was running out.

More than 300 Bangladeshi nationals were evacuated from Wuhan on February 1. They were transported to a facility for Muslim pilgrims in Dhaka. The facility normally hosts Muslim people travelling for the Hajj.

Most of the evacuees – a group that includes students and PhD researchers – were taken straight to the facility and quarantined. Eight were checked in to a hospital after developing high temperatures.

At least four Bangladeshi nationals were not allowed to board the flight after displaying fevers. Another 20 medical students chose not to board, New Age reported. 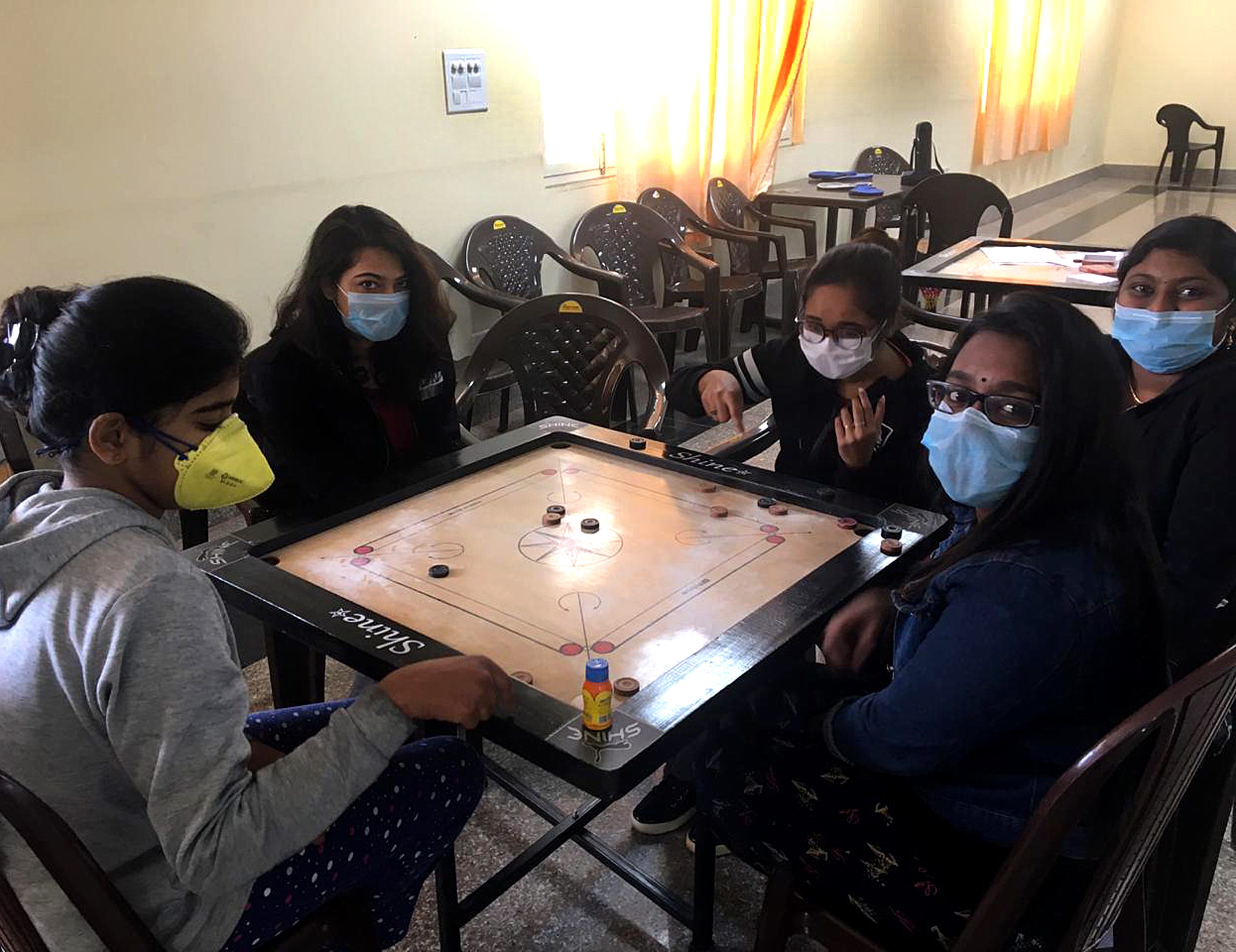 At the latter camp, evacuees played the game carrom to pass the time.

Indonesia evacuated more than 230 students from Wuhan. They were quarantined on a remote island. 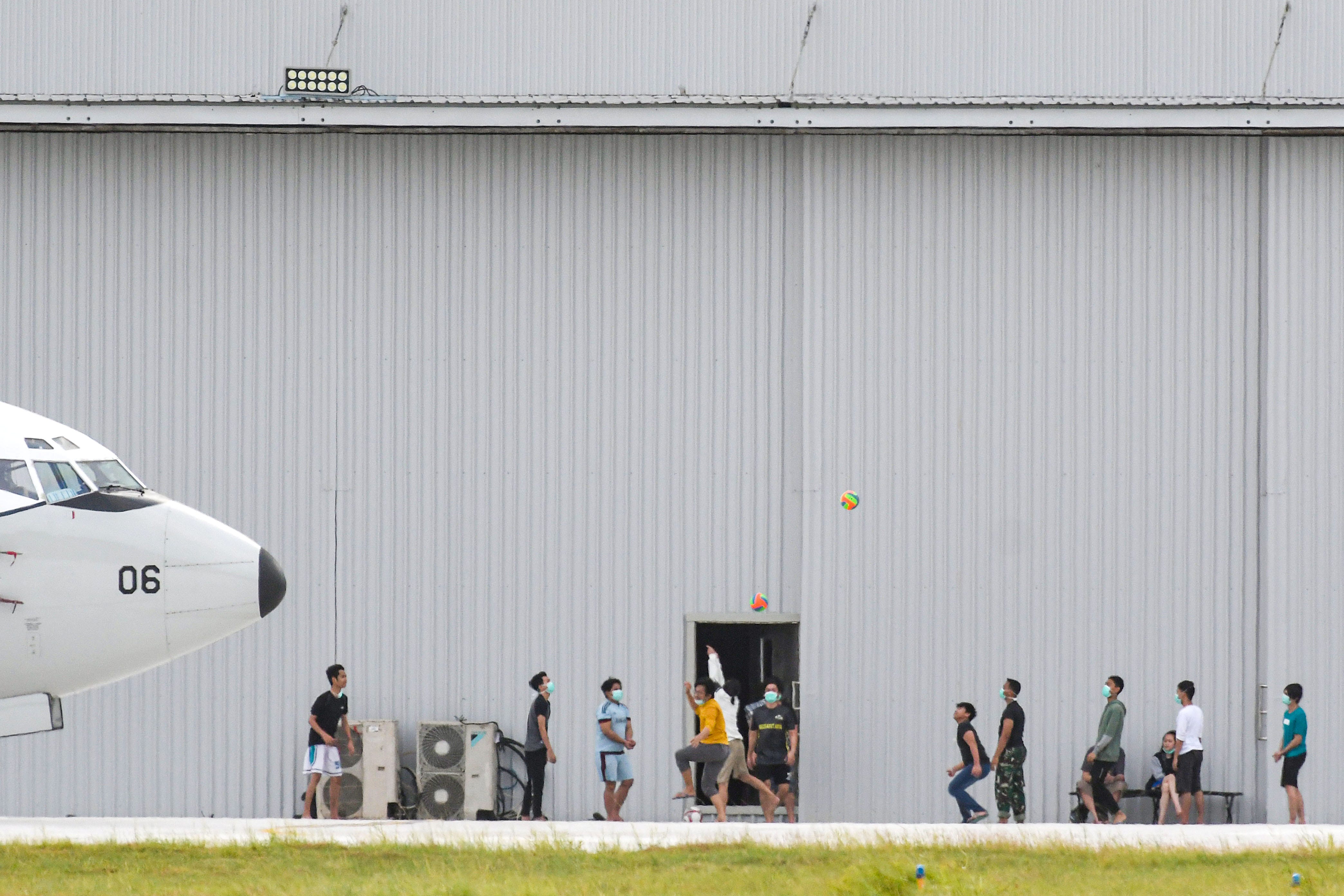 Antara Foto/M Risyal Hidayat/ReutersIndonesian nationals play with balls as they are placed under quarantine at an air force base in Natuna, Riau Islands, on February 4, 2020.

The evacuees include 238 students and five officials from the Indonesian embassy. They were taken to an air force base in Natuna, off the northwest coast of Borneo.

At a press conference on February 6, the nation’s director for communicable diseases, Windra Waworuntu, said doctors would monitor the health of the quarantined citizens. If they didn’t present symptoms, she added, there might not be a reason to test them for the virus.

“If they are not well, feverish, coughing, and sneezing, then we will swab,” Waworuntu said. “If they are fine, why should we swab?”

Around 36 Algerian nationals, mostly students, were quarantined in a hotel. Ramzi Boudina/ReutersParamedic staff leave a hotel where people who were evacuated from Wuhan are quarantined near Algiers, Algeria, on February 4, 2020.

A flight carrying the citizens took off from Wuhan on February 2. It also carried Tunisian nationals and students from Libya and Mauritania.

Reuters identified that Algiers hotel as the Rais Hotel. Ramzi Boudina/ReutersAn employee at the Rais Hotel on February 4, 2020.

The current price for a one-night stay there is around $US70, according to Tripadvisor. 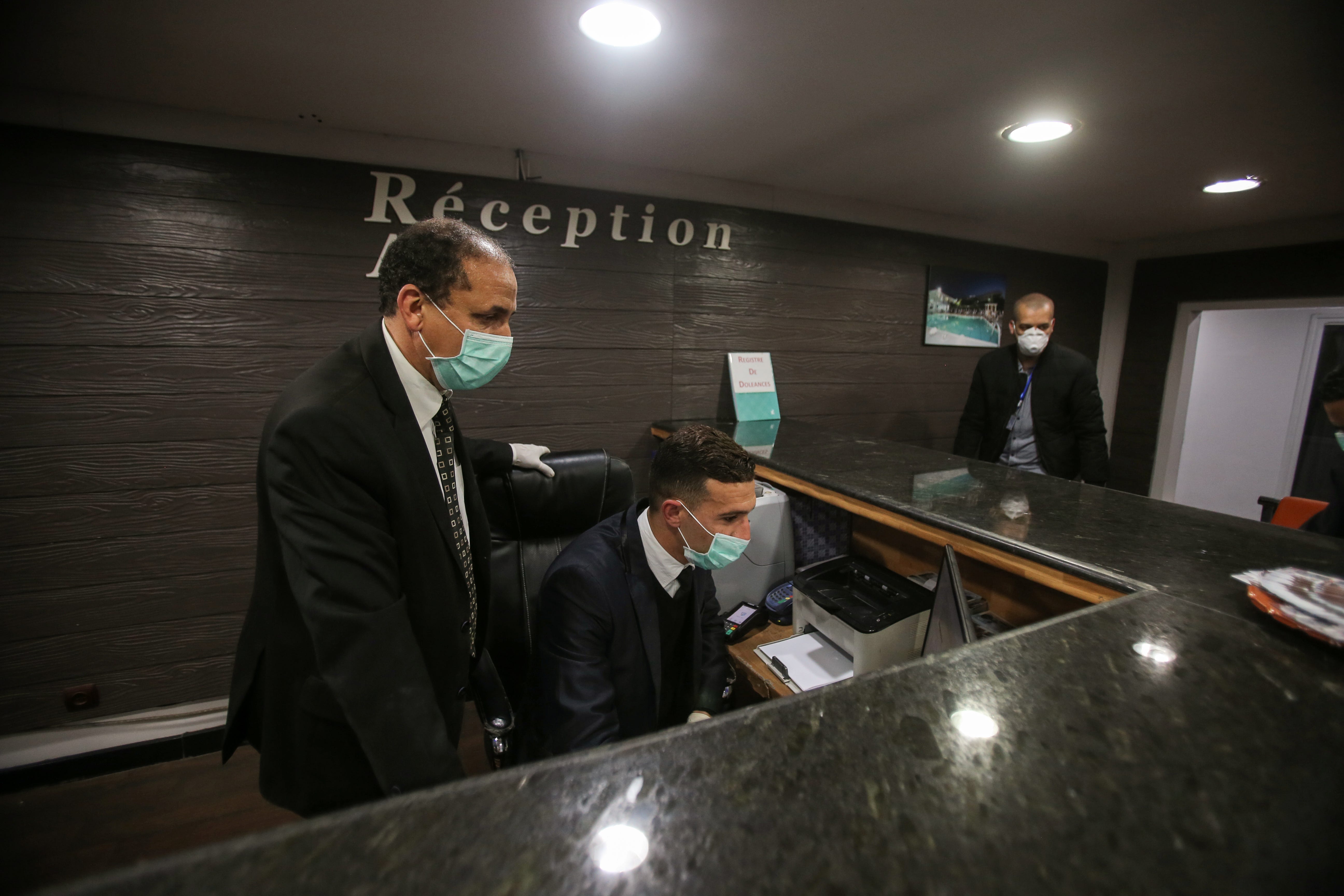 Ramzi Boudina/ReutersEmployees at the Rais Hotel on February 4, 2020.

No cases of the coronavirus have been reported in Algeria.

In Australia, 270 citizens and permanent residents were taken to an immigration detention centre on Christmas Island. The centre was built in 2006 and held asylum seekers until its closure in September 2018.

In February 2019, the Australian government announced that the camp would reopen; four people had been detained there as of October.

Now, passengers from Wuhan are being quarantined there for 14 days, with only two people from a family allowed in each room. The rooms come with bunk beds and a desk, but evacuees must share showers and toilets.

One Australian evacuee, David Huang, told The New York Times that the WiFi was shaky and the food was “uninspiring and mushy.” Huang, a 22-year-old student from Sydney, added that “travellers had found dead moths in their beds and dead cockroaches on the floors, and spent much of their first night in the centre cleaning,” the Times reported.

But Huang also said the meals come with fruit and vegetables and evacuees have access to Xbox 360 devices. The facility also provided evacuees with soap, cigarettes, sunscreen, shorts, and sandals.

The first group of evacuees are set to be released on February 17.

Photos from inside the Diamond Princess cruise ship, where thousands of passengers have been quarantined for a week because of the coronavirus outbreak

The US has confirmed 15 cases of the coronavirus across 7 states. Here’s what we know about all the US patients.

I was travelling in South Korea as the coronavirus struck, and I was amazed at how the country sprang into action