Concede or fight? Where Trump's lawyers, family members, and GOP lawmakers stand on the president's decision to refuse to concede to Biden 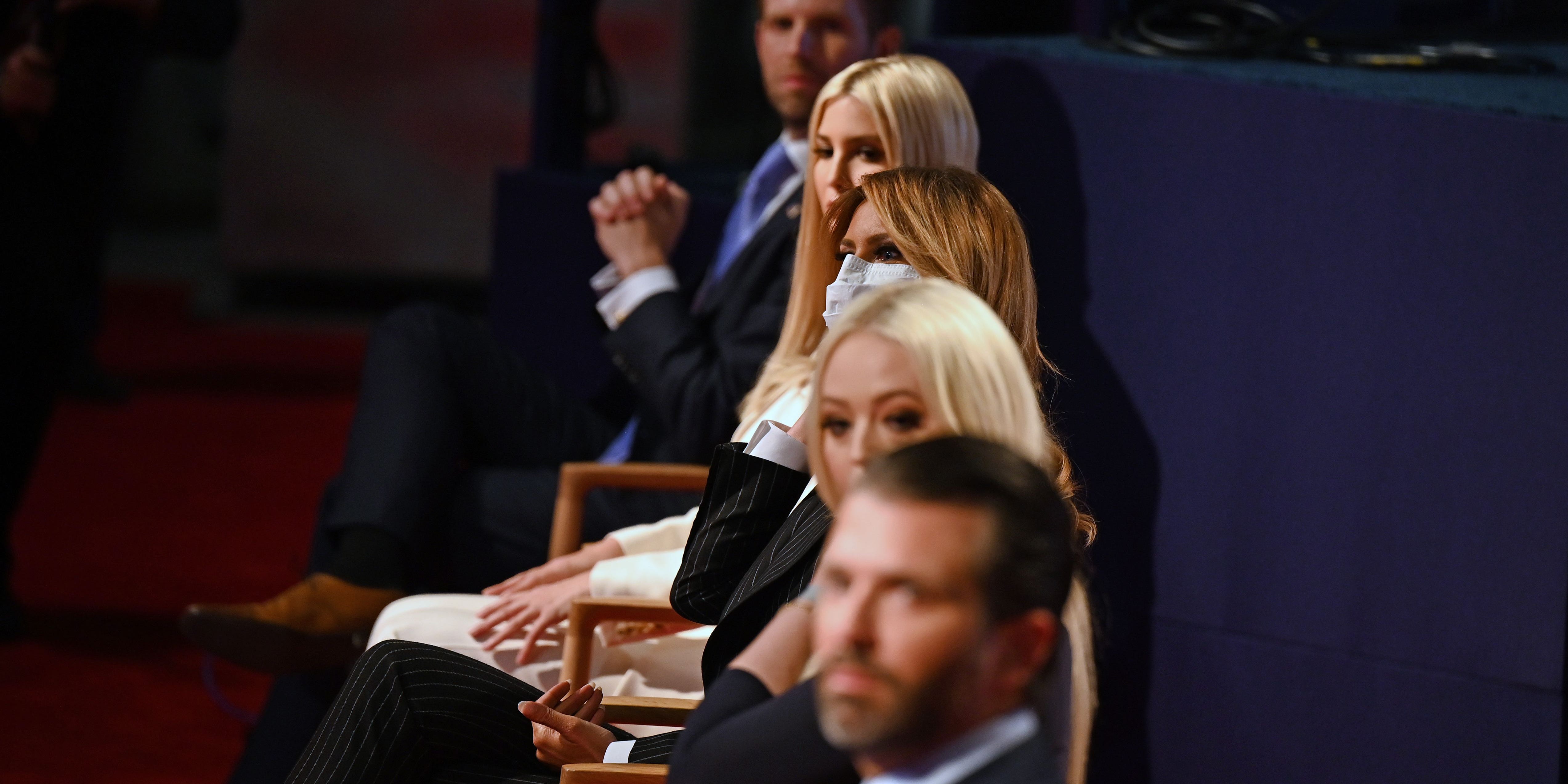 President Donald Trump’s refusal to accept that he lost the presidential election is dividing Trumpworld figures, who have either been encouraging him to concede or disputing the results.

Soon after Business Insider and major media networks called the election for President-elect Joe Biden, Trump’s campaign rushed out a statement saying that the former vice president “is rushing to falsely pose as the winner” and signalled that he would attempt to challenge the results in court.

Even much of Trump’s own legal team consider the attempt hopeless, as Business Insider’s Sophia Ankel has reported. Trump “is mostly alone here,” one aide told CNN.

Still, his campaign has continued asking for funds from supporters to finance the effort. And many high-profile MAGA supporters are rallying to defend him.

Here’s what his inner circle and major supporters have said to him:

The First Lady has made no public statement, but has privately told her husband to accept defeat, a source familiar with the conversations told CNN.

“She has offered [her opinion], as she often does,” the source said.

Ivanka Trump: Is the fight really worth it?

Ivanka Trump has approached her father to concede but advised him to do it after the Georgia recount finished, CNN reported.

According to the network, she feels the legal challenges will ensure election integrity, but won’t change the outcome â€” and has asked her father to consider the business impact of his refusal.

But Campaign Senior Advisor Jason Miller disputed the reports, saying in a tweet: “Jared has advised @realDonaldTrump to pursue all available legal remedies to ensure accuracy.”

But news outlets are reporting that Kushner largely agrees with Ivanka’s assessment, and is telling Trump only to fight until the Georgia recount, rather than to the bitter end.

One of the president’s staunchest cheerleaders, Fox News host Laura Ingraham, took the unusual step unaligning herself with Trump and advising him to accept defeat.

“If and when it’s time to accept an unfavourable outcome in this election, and we hope it never comes, President Trump needs to do it with the same grace and composure that he demonstrated at that town hall with Savannah Guthrie,” she said, in reference to his town hall event with the NBC anchor.

The Fox anchor and Trump confidante has attempted to create a picture of hope for Trump.

His Twitter feed as of November 9 included a Breitbart article comparing the election results with the Bush v Gore contest of 2000, even though legal experts have said it is a poor comparison.

Hannity also tweeted a blog post by conservative political commentator Gregg Jarrett with the headline: “The presidency is chosen by electors from all 50 states, not news organisations riven with bias.”

The Fox News opinion host bolstered voter fraud claims in the election, but then started to back away.

Claims of widespread voter fraud have been countered by the Department of Homeland Security and international election observers.

On “Tucker Carlson Tonight” on November 10, the host said that the alleged fraud was still not enough to affect the outcome of the election. Four days later, he apologised for spreading a false story about a “dead” person voting.

He has also disavowed some of the wilder claims being made on Trump’s behalf, slamming maverick lawyer Sidney Powell on November 19 for refusing to produce evidence for her allegations.

The South Carolina senator has put his money where his mouth is, telling Sean Hannity’s show that he had personally donated $US500,000 to Trump’s legal efforts.

He also appeared on Fox News to urge him not to concede and to fight in the courts.

“I congratulate President-elect Biden and Vice President-elect Kamala Harris on their victory,” Toomey said. “They are both dedicated public servants and I will be praying for them and for our country.”

Trump is trying “to thwart the will of Michigan voters and select an illegitimate slate of electoral college electors,” he added.

Other Republican lawmakers, including Sens. Mitt Romney of Utah, Susan Collins of Maine, and Lisa Murkowski of Alaska, have also acknowledged Biden as the victor.

The North Dakota senator is keeping in tune with Trump, telling him to continuing fighting the election results.

“I don’t know why we are so easily offended by a president who is carrying out all his legal options,” Cramer said on NBC’s “Meet the Press.”

At the same time, though, Cramer said the White House should begin the transition process.

Texas Sen. Ted Cruz told Fox News that it was “way premature” for the president to concede. “At this point, we do not know who has prevailed in the election,” he said, according to Newsweek.

The New York Post rallied hard in the president’s defence during the late stages of his campaign, including running a controversial and poorly sourced story alleging corruption by Biden and his son in Ukraine.

But it appears the Rupert Murdoch-owned tabloid has accepted the reality in this case, with a full-page cover saying “It’s Joe Time.”

In an editorial, the Post described Trump’s re-election as “near-impossible” and urged him to drop “conspiracy-addled talk of a ‘stolen election'” and to concede to secure his “legacy.”

The president’s personal lawyer has been spearheading Trump’s efforts to dispute the election results.

He’s alleged that there’s “uniform deprivation of the right to inspect” ballots at counting stations, CBS reported. He said he has statements from several poll watchers corroborating this allegation.

He also accused the “Democratic machine” of tampering and of “[keeping] the votes of dead people secret,” the network reported. He did not offer evidence.

“Obviously [Trump is] not going to concede when at least 600,000 ballots are in question,” CBS reported him as saying.

The president’s two eldest sons, Eric and Donald, were bullish on Thursday in defence of the president, lambasting senior Republicans on Twitter for not standing up for him more vocally.

As of Monday, the pair had retweeted numerous claims of voter fraud and lack of trust in the electoral process. Twitter flagged numerous tweets, slapping on them a “disputed” information label.

McConnell echoed Trump’s unease with the results, writing in a tweet that “Every legal vote should be counted.” While not explicitly endorsing Trump’s baseless allegations of fraud, that message has been repeated by many who sympathise with him.

Still, McConnell has promised there would be a peaceful transfer of power.

McEnany, who is unusually both a campaign advisor and White House press secretary, backed the president.

She tweeted: “Now we are expected to roll over & unite behind Joe Biden without asking questions? NOPE!!”

The Fox host retweetedEric Trump’s call for Republicans to “have some backbone” and “fight against this fraud.”

“Time to stand up for our constitution our president and our way of life,” she added.

The former speaker of the House went on “Fox & Friends”to back the unfounded accusations of fraud. He also alleged, also without evidence, that figures “like George Soros” were behind an attempt to steal the election.

“I think [Biden] would have to do a lot to convince Republicans that this is anything except a left-wing power grab financed by people like George Soros, deeply laid in at the local level,” he said. “And, frankly, I think that it is a corrupt, stolen election.”

Soros, a Jewish billionaire who finances progressive initiatives, is a favoured target among the hard right, who accuse him baselessly of piloting an attempt to control the world order.

“More and more people, very close supporters and friends of the President are all giving him that advice. He is just not listening,” Hogan said on CNN.

“It was a pretty overwhelming victory [for Joe Biden] at this point,” he added.

Liz Cheney: The time has come to concede

“America is governed by the rule of law,” Cheney, the chair of the House Republican Conference, said in a statement. “The President and his lawyers have made claims of criminality and widespread fraud, which they allege could impact election results. If they have genuine evidence of this, they are obligated to present it immediately in court and to the American people.”

“If the President cannot prove these claims or demonstrate that they would change the election result, he should fulfil his oath to preserve, protect and defend the Constitution of the United States by respecting the sanctity of our electoral process,” she added.

Vice President Mike Pence said the administration plans to remain in place for another full term.

Supporters on Friday began chanting “four more years” at Pence, who was delivering a speech to conservative nonprofit Council for National Policy.

“That’s the plan,” Pence replied to the event attendees.