How your state verifies the authenticity of your mail-in ballot 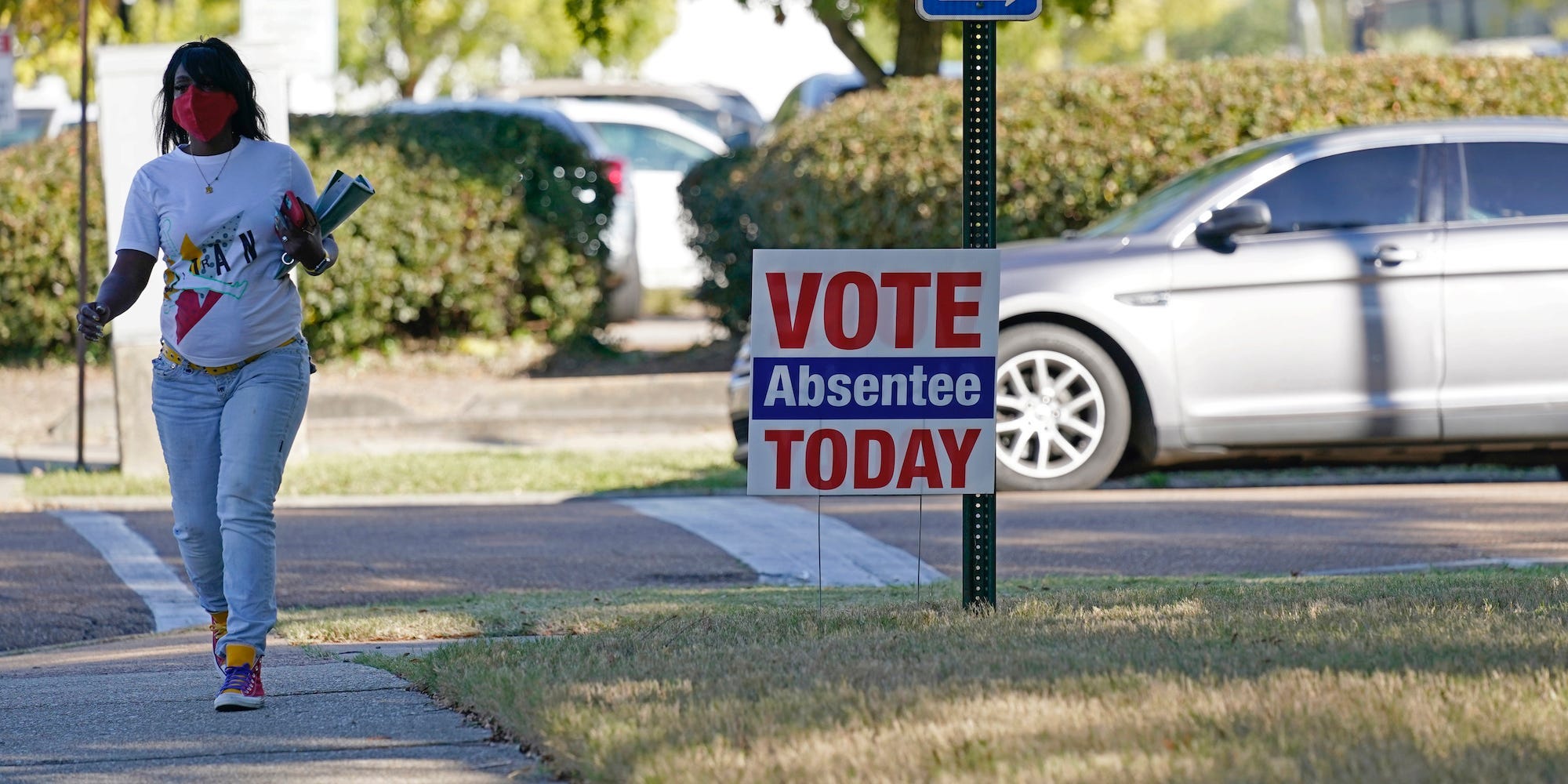 AP Photo/Rogelio V. SolisA woman in a face mask walks past a sign encouraging voters to vote absentee in light of COVID-19 precautions on the grounds of the Hinds County Courthouse in Jackson, Miss., Tuesday, Oct. 6, 2020

As states have expanded the accessibility of voting by mail due to the COVID-19 pandemic, President Donald Trump and other top Republicans have spread exaggerated and false claims that voter fraud with mail ballots is rampant.

But in reality, all voter fraud, including fraud with mail ballots, is extremely rare.

A database of voter and election fraud cases maintained by the conservative Heritage Foundation finds that documented cases of fraud with mail ballots are more common than cases of in-person voter impersonation, ballot petition fraud, and registration fraud, but that overall rates of fraud are infinitesimally low.

How do rates of fraud stay so low? Firstly, the decentralized nature of the US’ election system makes it difficult to pull off any large-scale, coordinated voter fraud. And states use a number of largely successful measures to verify the authenticity of mail ballots, and to easily detect and prevent fraud and interference when it is attempted.

Every state requires a voter to sign an affidavit on the envelope containing their ballot, and for ballots to be received or postmarked by Election Day, or in the same states, the day before, to count.

As the following map shows, the majority of states also use a process called signature matching, in which election officials verify the signature on a voter’s ballot envelope with the most recent signature on file.

For the 2020 election, six states will require voters to include a witness signature. A few states also require a signature from a notary public or photocopy of a voter’s photo ID to be included with a voter’s ballot. This year, Missouri, for example, will require all by-mail and absentee voters, except those confined in a long-term care facility and those who are over 65 or have other risk factors for COVID-19, to get their ballot notarized.

If you’re voting by mail this year, be sure to both sign the affidavit on your envelope and include any additional documentation that your state requires. While many states have an established “cure” process in which voters can fix mistakes with their ballots, you can save yourself and your election officials time and work by carefully following the instructions when you first fill out your ballot.

If you need help navigating the ID laws in your state, getting an ID, or making a photocopy of your ID to send in with a mail ballot, nonprofit organisations including VoteRiders can assist you.

A handful of states also include both an outer envelope and an inner secrecy envelope for voters to return their ballots in. The Pennsylvania Supreme Court recently ruled that election officials cannot accept any ballots that arrive without the secrecy envelope, which are sometimes referred to as “naked ballots.”

In addition to voter signatures, signature matching, and witness signatures, many states affix voter identification numbers and barcodes on the ballot envelope that pertain specifically to the voter, precinct, and the election.

These measures are key in enabling officials to ensure that the person who received the ballot is the one who turned it, prevent voters from voting twice, and also make it easier for voters to track the status of their ballot online.

Statewide or local election offices in 47 states and the District of Columbia now offer some form of online ballot tracking, with a number of states and counties also offering email and text message alerts when voters’ ballots are sent out, received, and accepted.

Every municipality also creates ballots and envelopes in highly specialised ways that can’t be easily counterfeited, down to the design of the ballot itself, the type of ink and font, and even the weight and colour of the paper used.

The rules around verification of mail ballots have been intensely litigated in the courts in the months and weeks leading up to November 3.

Many Democratic organisations and non-partisan voting rights groups have sued states to lessen restrictions like witness signature requirements and to extend the deadline by which ballots can be received, while Republicans have fought in court to keep such restrictions in place, citing election integrity.

Three states that previously mandated witness signatures before 2020 â€” Minnesota, Rhode Island, and Virginia â€” have suspended those requirements in light of the COVID-19 pandemic. North Carolina also reduced the number of required witness signatures on mail ballots from two to one.