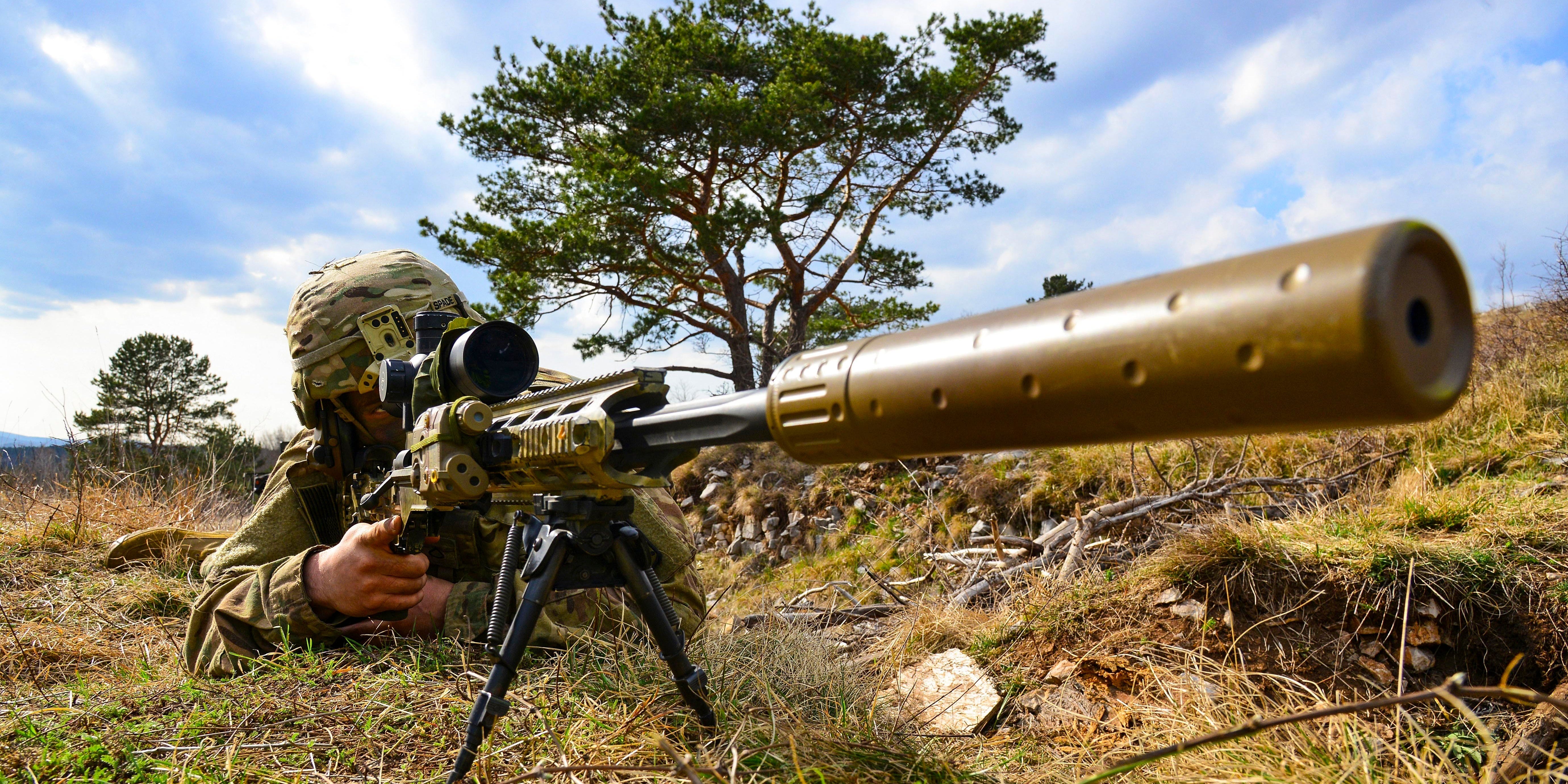 US ArmyAn Army paratrooper points a weapon during sniper training at Pocek Range in Postojna, Slovenia.

What do snipers think about before they pull the trigger? There are dozens of possible considerations that go into a sniper’s shot, everything from wind to an escape plan should things suddenly go sideways, current and former US military sniper instructors told Insider.

To shoot at those greater distances, which sometimes requires pushing a weapon beyond its limits, snipers have to consider things like target selection and priority, size, distance to target, whether or not the bullet is lethal at that range, and, if the target is moving, target speed and direction.

‘We know what a bullet does’

There are also the ballistics – anything that affects the flight path of the bullet that could cause the sniper to miss.

Extensive ballistics knowledge is one of several key differentiators between snipers – expert marksmen – and other troops who are simply good shots, according to a former instructor.

“We know what a bullet does,” John Wayne Walding, a former US Army Green Beret who became a Special Forces sniper instructor after losing a leg in Afghanistan, told Insider. “A sniper has education on not just what the bullet’s doing but why it’s doing it. That is what sets us apart.”

There are both internal and external ballistics, he said.

Internal is everything happening inside the rifle and includes things like bullet size and weight, which affect to what degree a bullet will be impacted by the various external factors, and the barrel twist, which affects the spin drift of the round at greater distances.

External ballistics are everything happening to the bullet once it exits the barrel. Among the external factors that can affect the bullet’s flight path are atmospherics like wind, humidity, temperature, barometric pressure, and air density.

Wind speed and direction, which can change suddenly and inexplicably, are particularly important because they account for most missed shots, US Marine Corps Scout Sniper instructor Staff Sgt. Joshua Coulter told Insider.

Snipers need to know wind at not only their position, but also at various points along the bullet’s path and at the target. To get a wind reading for the distant points, the sniper looks for makeshift wind indicators like trash, clothes on a clothesline, smoke, or really anything that might be blowing in the wind.

Other possible considerations may include the curvature and rotation of the Earth, the angle of the shot if the shooter and target are at different elevations, and anything, such as thicker vegetation, between the sniper and the target that might throw off the shot.

Snipers have to take most, if not all, of these factors into account and correct before they fire a shot to hit a distant target – with the knowledge that their first shot is likely to be their best chance at striking it.

There are electronic tools that snipers can use to simplify the process to determine things like range, gather atmospheric data, and generate a firing solution. Snipers try not to rely on these though, but if they do use them, they verify the data.

The much more important tool snipers have is their collection data on previous engagements, which contains detailed information on how the sniper, the rifle, and the bullet performed in certain conditions in the real, not digital, world.

“At the end of the day, the bullet is not going to lie to you,” US Army sniper instructor Sgt. 1st Class Joshua Jones told Insider.

“We really don’t need a lot of technology to be able to operate,” he said, explaining that “given a weapon system with an optic and data on previous engagements, we are pretty effective at doing our job as far as engaging targets goes.” 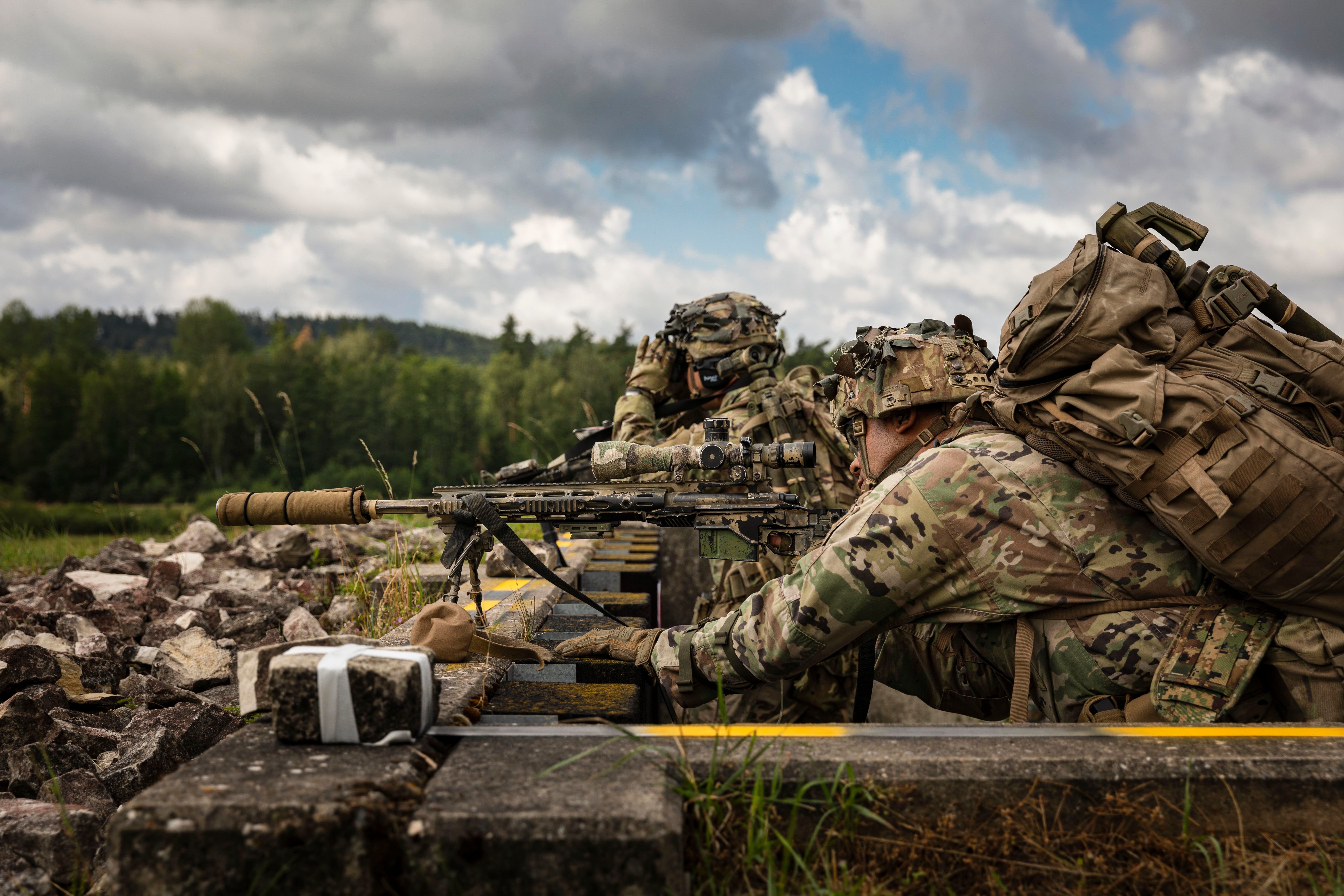 US Armysniper during a sniper competition

‘That is when you want to fire the weapon’

There are also marksmanship fundamentals like shooting position, trigger control, and breathing that the sniper has to take into consideration. Through training, many of these things will become second nature for a sniper.

The ideal shooting platform is one that is solid, stable, and durable, and the ideal shooting position is prone. That is not always an option in battle though, so snipers have to be prepared to work with what is available, Walding told Insider.

“Out in the real world, you’re shooting over a Humvee, shooting out of a window, on a rooftop, on a knee, standing, standing while moving,” he said. “There are so many alternate shooting techniques we run through because of the realities of the battlefield.”

A proper shooting position improves recoil management, preventing the explosion that violently forces the bullet out of the rifle from disturbing the sight picture and complicating follow-on shots.

For similar reasons, it is also important that snipers have good control of the trigger, applying pressure smoothly when firing, and have relaxed, natural breathing.

“You want to breathe as natural as possible,” Jones said, explaining that snipers wait for a “natural pause” in ther breathing. “That is when you want to fire the weapon,” he said.

Snipers also have to think about mission-specific considerations such as muzzle flash, lens glare on the scope if the sniper is shooting into the sun, and barrel blast that can blow out vegetation or kick up dust. Any of these things can affect concealment and give away a shooter’s position.

Stealth and concealment, though they are crucial sniper skills, are not necessarily required for every mission, but when they are, snipers have to be prepared for the possibility that their position is compromised by their shot.

It is critical that snipers have an escape plan, “a tenable egress route and sourced contingency assets and fire support agencies in the event their position is compromised post-shot,” Coulter said.

‘Somebody that can get the job done’

“There are a million things that go into being a sniper, and you have to be good at all of them,” an Army sniper previously told Insider. That said, when it comes to the shot process, “everybody is going to have their checklist” that they run through, Jones said.

And in many, but not necessarily all, cases, there is also planning before the mission.

Coulter said that ideally a sniper’s “ability to conduct a mission analysis prior to crossing the line of departure or taking the shot will allow them to occupy a brief position of advantage when relatively compared to the enemy, the terrain and current weather.”

Doing so increases “the odds of mission success,” he said.

And with practice comes experience, reducing the time it takes to run through the process. A trained sniper can put accurate fire on at least 10 targets in about 10 minutes. It is actually something Army snipers have to do to graduate from the program.

For the extreme long-range shots, the shot process can still take some time, as well as some math. A Marine Corps sniper previously told Insider about a shot he took in training that involved putting a bullet in a target 2,300 meters away. It took him roughly 20 to 25 minutes to plan the shot.

Although shooting is a very important part of what snipers do, it is only a part. Snipers also gather intelligence and provide overwatch on the battlefield. The role requires professionalism, reliability, capability, and maturity.

“Just because you can shoot doesn’t mean you can be a sniper,” Walding said, adding that “You’ve got to have somebody that can get the job done, and not every marksman can.”