A millennial earns a $48,000 salary in San Francisco — here's how she lives comfortably in a city known for its sky-high prices 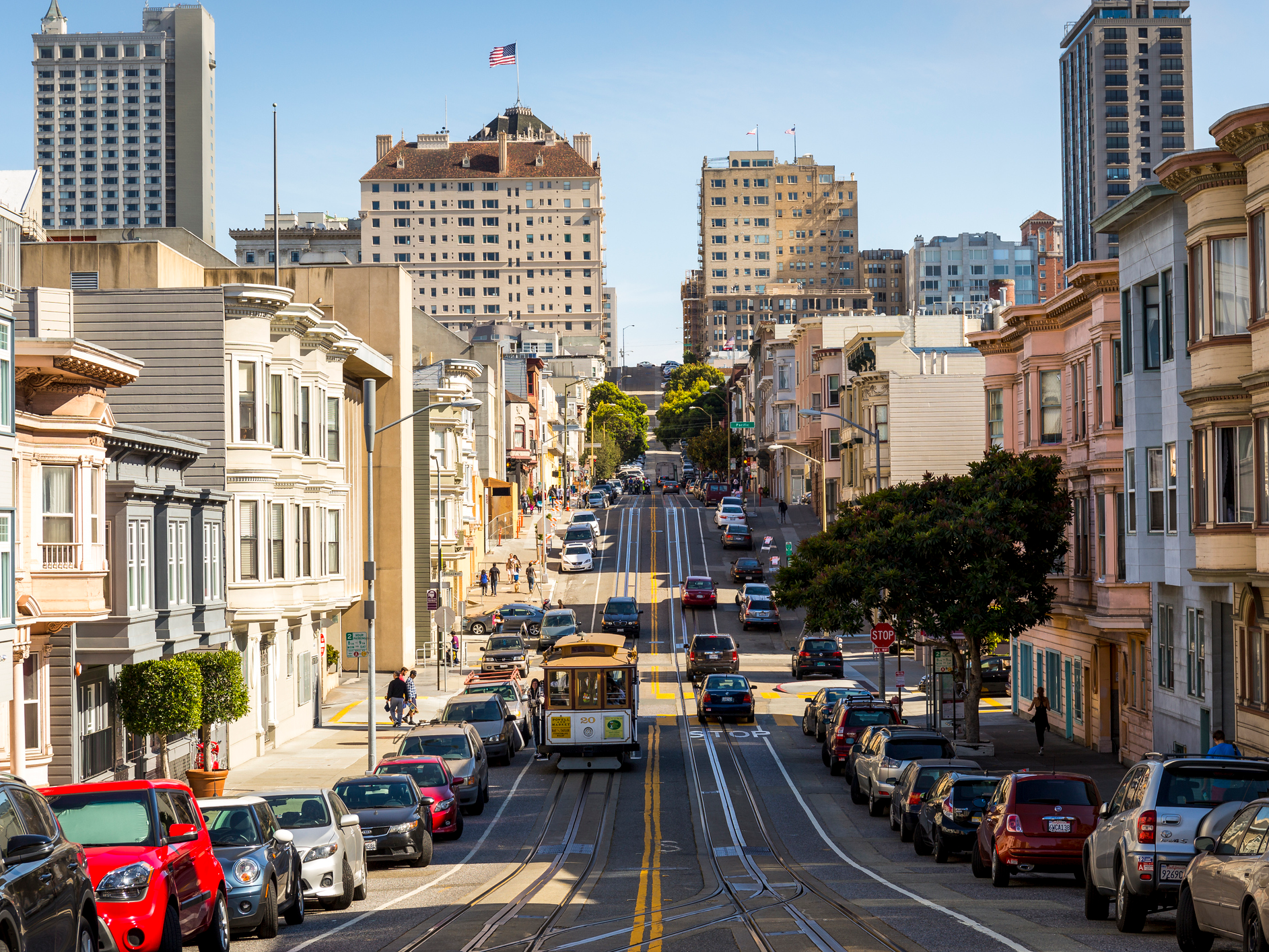 Getty ImagesSan Francisco may be expensive, but millennials are still finding ways to afford the city.

By now, we are all familiar with the effects that Silicon Valley has had on the once alternative, bohemian San Francisco.

Mum-and-pop stores have turned to juice bars, over-crowded brunch spots serve $US23 toast, and roads are filled with tech shuttles.

And prices continue to inch up. The average rent for a one-bedroom apartment in San Francisco is $US3,438 a month, a 2.18% increase from last year, Rentjungle reported in January.

Leila Meraz-Baca is a 23-year-old from Noe Valley, San Francisco, a neighbourhood she said used to be “middle-class families,” but has quickly turned into one of the city’s most desirable areas. After graduating from college in New Orleans, Meraz-Baca made the decision to return to San Francisco, where she landed a job at a non-profit in Marin County. She now lives in the Richmond District with two roommates.

While she earns a $US48,000 salary, she says there are still plenty of ways to live comfortably, especially as someone not involved in the “young transplant tech scene.”

Business Insider asked Meraz-Baca to document her experience living in the second most expensive city in the US as a young millennial working her first job.

After graduating college, Leila Meraz-Baca moved into a three-bedroom rental property in the Richmond District of San Francisco. 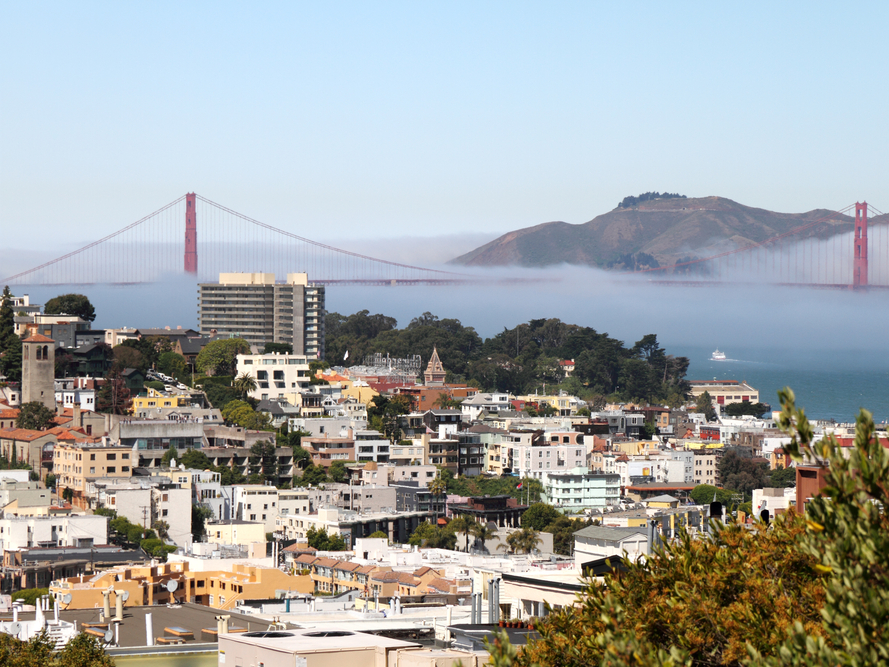 The Richmond District is in the city’s northwest corner. The Inner Richmond is a historically Asian-American neighbourhood with bustling shops and restaurants gradually adopting the reputation of “New Chinatown.”

Rent prices in the Richmond District are a clear reflection of the growing popularity of the neighbourhood. The New York Times reported that larger units (more than one-bedroom) will cost around $US4,000 or even $US5,000 in rent a month.

She pays $US1,200 a month to share a three-bedroom home with a porch and backyard, pictured. Her two roommates also pay the same amount. 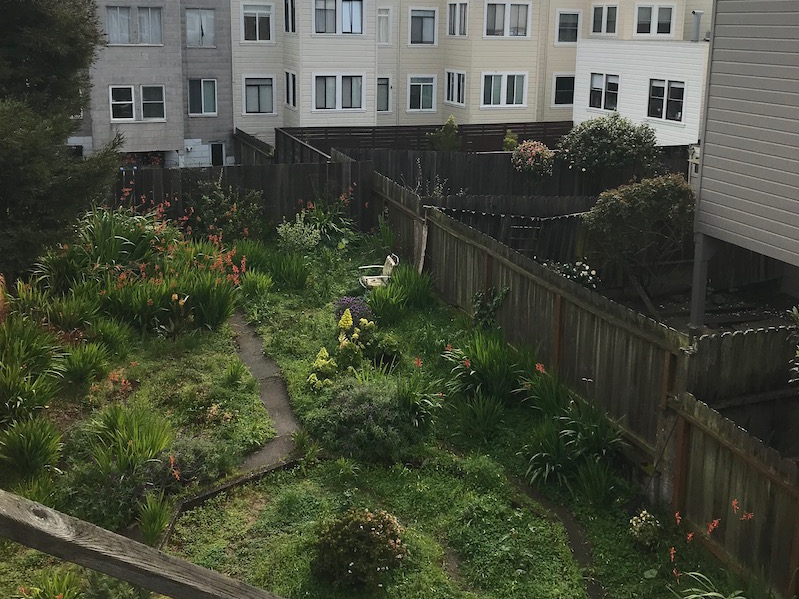 “We think we got a really good deal,” Meraz-Baca told Business Insider.

The three friends rent a 1,008-square-foot apartment, which is the top unit of a house. The yearly rent comes to just under a third of Meraz-Baca’s salary before tax.

After Meraz-Baca graduated, she said she watched her friends struggle to find affordable places to rent in cities like Manhattan, New York, where the average size of an apartment is usually 700 square feet or less.

Four times a week, Meraz-Baca takes a workout class at a local gym. Her monthly membership is $US190. Guido De Bortoli/Getty ImagesMeraz-Baca made the decision that she was willing to pay more for a quality workout.

According to the 2020 Wellness Index released by MindBody, a wellness technology platform, San Francisco has more than 16 gyms and other wellness businesses per square mile.

Business Insider’s Hillary Hoffower once reported that millennials have been called “the wellness generation,” and prioritise a pricey gym membership or specialised workout class over other spending, such as retail shopping.

Meraz-Baca fits this mould. The gym membership fee is her largest monthly expense, behind her rent.

“My gym membership is kind of embarrassing. It’s definitely my biggest expense,” she said.

For Meraz-Baca, the decision came down to her overall wellness. Working out is something that she says keeps her grounded and feeling good. She would rather shell out more money towards a workout than she would clothing or a restaurant meal.

While her gym has a high monthly fee, she believes she would spend more if she attended the boutique workout classes seen across San Francisco. 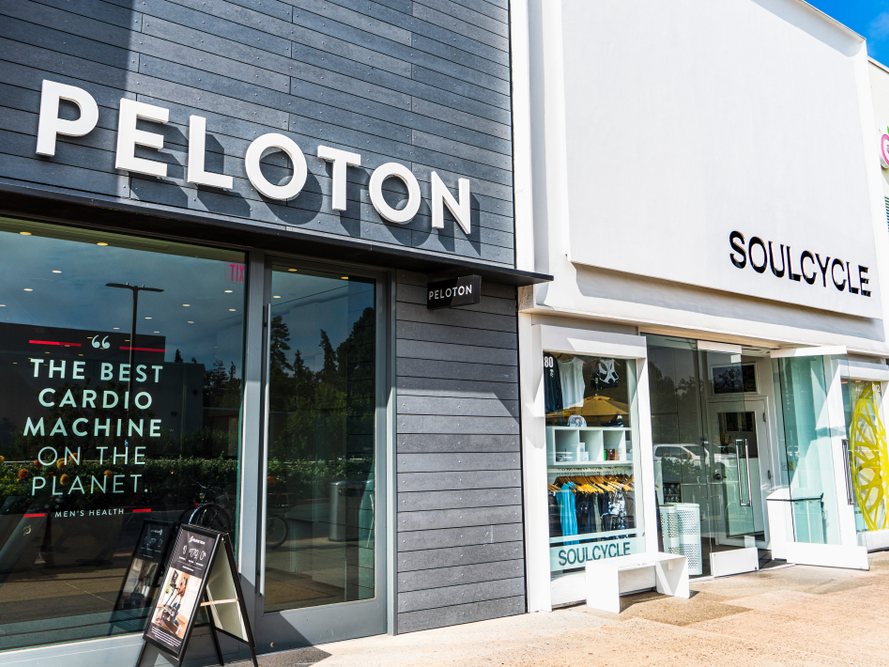 “Especially downtown and in the Marina, there are tons of workout classes like SoulCycle popping up,” Meraz-Baca said.

Instead, Meraz-Baca takes a group workout class in her gym.

She describes the class as a “knock-off Barry’s Bootcamp,” a high-intensity interval training workout popular across the country. There are four locations in San Francisco, and a single Barry’s class costs $US36.

While her gym membership is still high, if she takes her workout class four times a week, it averages out to a little over $US10 a class, making it a far cheaper alternative to the boutique workout classes across the city.

Meraz-Baca also noted that there are plenty of outdoor spaces like the Golden Gate Park, where residents can enjoy some exercise for free.

One expense Meraz-Baca can’t avoid is gas and the daily toll fee she pays to get to her office job in Marin County. 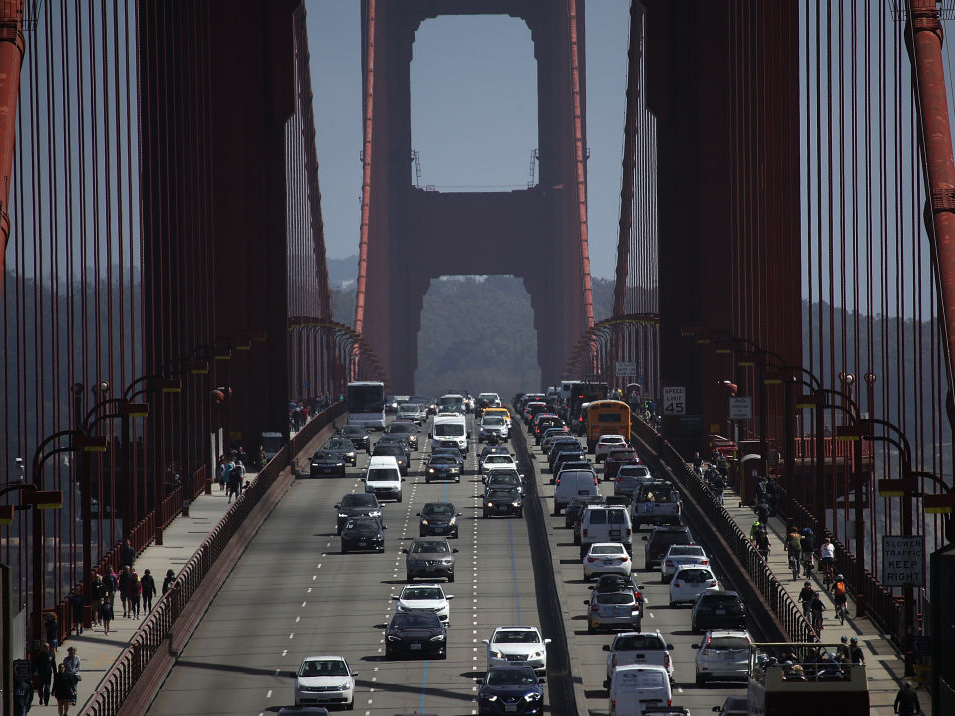 Justin Sullivan/Getty ImagesMarin is in Northern California, right across the Golden Gate Bridge.

Meraz-Baca has to pay a daily toll of $US7.35 to cross the Golden Gate Bridge. This comes to more than $US1,800 for the year.

In addition to the toll, she needs to pay for gas for her Toyota Prius, which she is borrowing from her mum until she can save for her own car. She pays about $US3.50 a gallon, usually spending $US30-35 every 10 days.

On the weekends, Meraz-Baca takes public transportation to travel across the city. 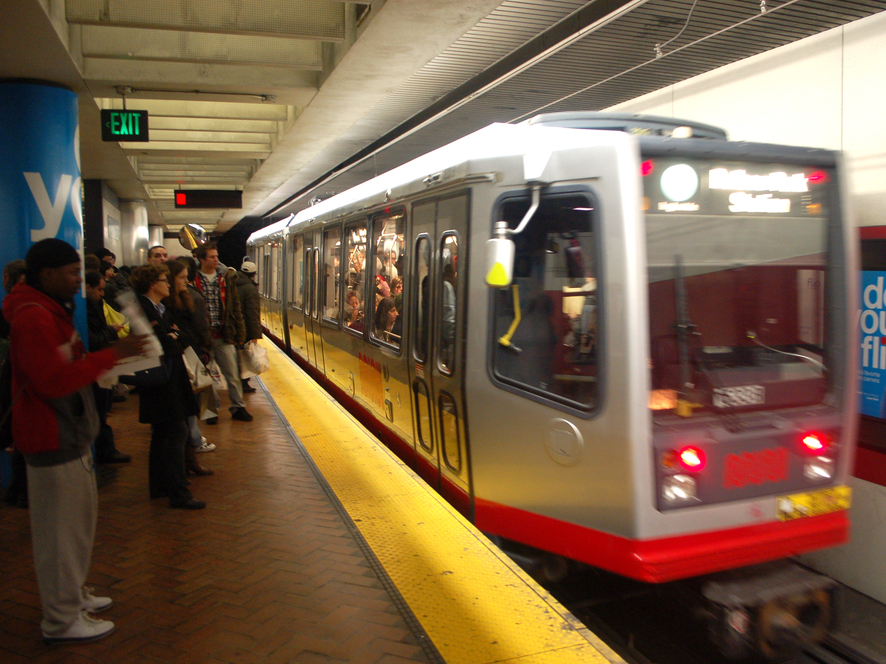 While she doesn’t use public transportation during the week, it is common to take advantage of it on the weekends.

“If we are going to Oakland or Berkeley, we would take the BART (Bay Area Rapid Transit),” she said, or there’s the Muni (San Francisco Municipal Railway).

When she lived at home in Noe Valley, it was much easier to take the bus to the gym or run errands. “Now where I live, I am not near any bus lines that would take me to the gym, so I just drive,” she said.

Her roommate takes public transportation to and from work five times a week, paying $US30, which is close to what Meraz-Baca pays every ten days on gas to drive to work.

But sometimes she skips public transport at the weekends for Uber, which makes a significant dent in her budget. 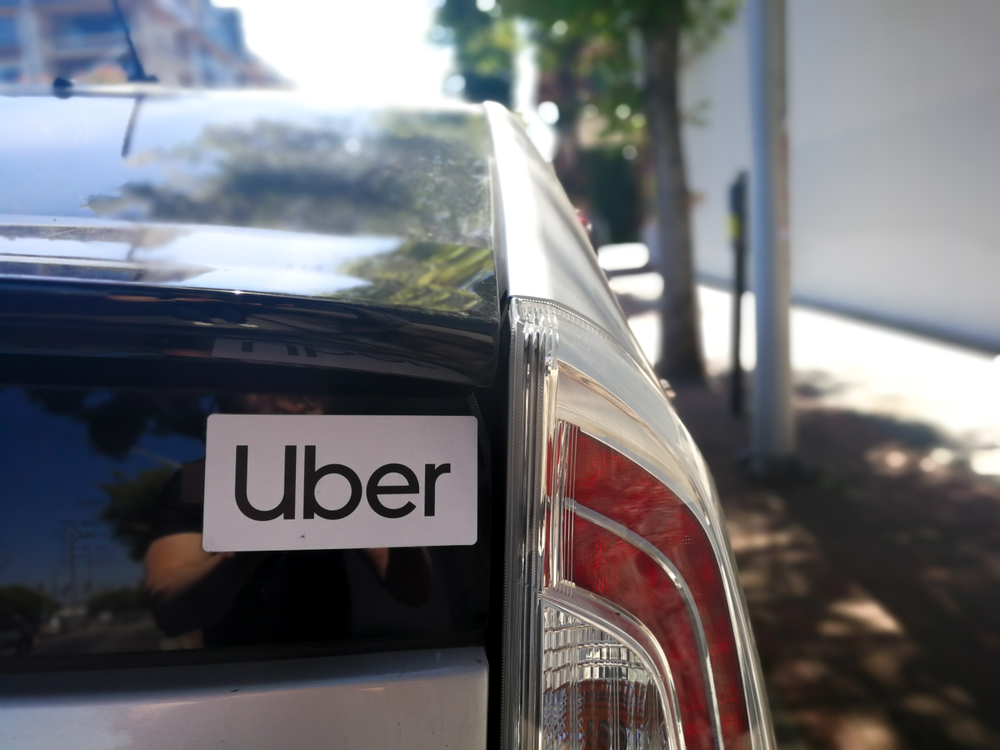 Kevin McGovern/ShutterstockA ride across town can cost just as much as a night out to dinner.

Usually Monday through Friday, Meraz-Baca avoids Ubers and drives everywhere. But come the weekend, “I spend a lot on Uber,” she confesses.

“The other day I went to a Warriors game in the Mission. I took a 25-minute drive across town, probably 3.5 miles, and it cost me $US27,” she said.

She said she also resorts to using Uber to keep herself safe while out in the city at night.

To keep groceries affordable, Meraz-Baca visits a variety of stores to stay on budget and protect the environment. 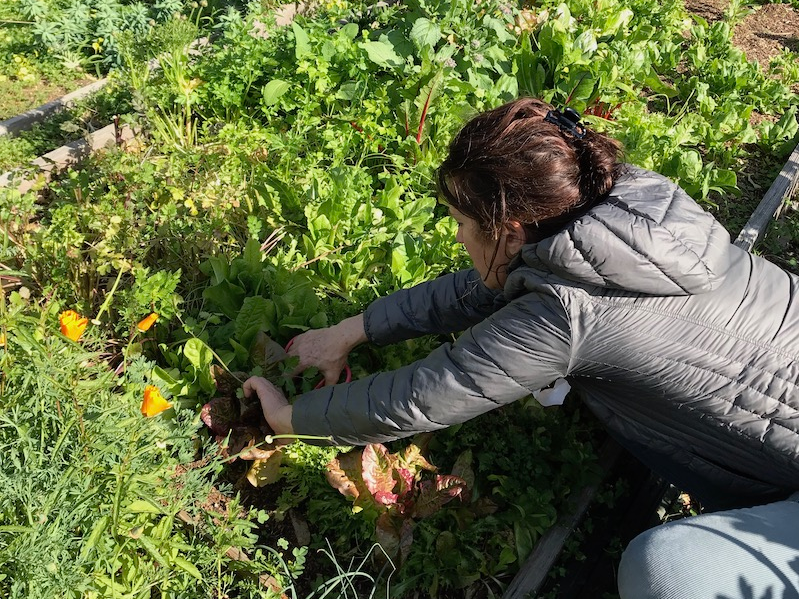 Prices for groceries in San Francisco are higher than elsewhere across the country. MoneyWise calculated the average cost of breakfast in popular cities, selecting a variety of foods (cereal, milk, sausage, orange juice, coffee, eggs, etc) and estimating prices for each. In San Francisco, the average cost of breakfast is $US36.76; in New York it’s $US33.96; in Chicago it’s $US27.44; and in Austin it’s $US23.29.

While San Francisco is dominated by boutique health-food and Whole Foods stores, finding inexpensive groceries is not impossible.

Her first stop is usually Trader Joe’s, which has a reputation for being affordable and popular among millennials.

Next, she will head to the farmer’s market on Saturdays to support local farmers and reduce waste. “All the produce at Trader Joe’s is covered in plastic,” she said. Now more than ever, millennials are prioritising sustainability, with grocery shopping being an easy first step.

For Meraz-Baca, the challenge is to honour her sustainability values and to also stay within her budget. The farmers market is ideal, but can be pricey. Luckily, her mother in Noe Valley has an extensive garden (pictured), and she gives Meraz-Baca plenty of fresh produce for free.

Overall, Meraz-Baca will spend about $US50 a week on groceries, including alcohol.

To avoid blowing through her paycheck on the weekend, she tries to steer clear of fancy restaurants and instead opts for cooking at home. 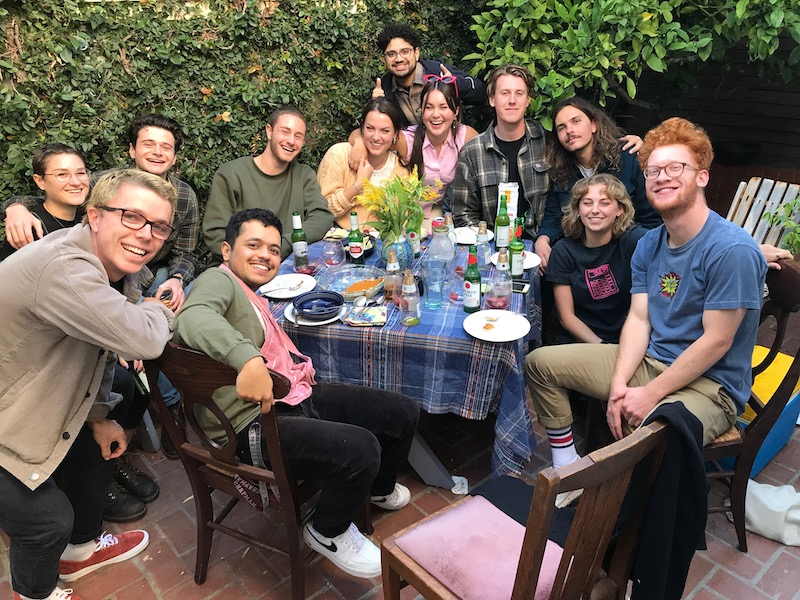 Photo courtesy of Leila Meraz-BacaMeraz-Baca hosting friends over for a dinner party.

San Francisco is known for its luxury restaurant scene, including 59 Michelin-star restaurants.

Meraz-Baca is not phased by the restaurant scene in the city. “I don’t really like going out to eat that much, and to save money, now we just invite people to come here to cook and hang out,” she said.

In doing so, she reflects the values shared by her generation. According to reporting from Vox on the evolution of dinner parties, millenials prioritise friendship. They “value gathering with their friends and loved ones over food and drinks, but they have changed the playbook to adapt to our post-recession economy.”

Although she doesn’t dine out much, Meraz-Baca does enjoy draft beers, and every once in a while, she’ll go out with friends for a cocktail on the weekends. 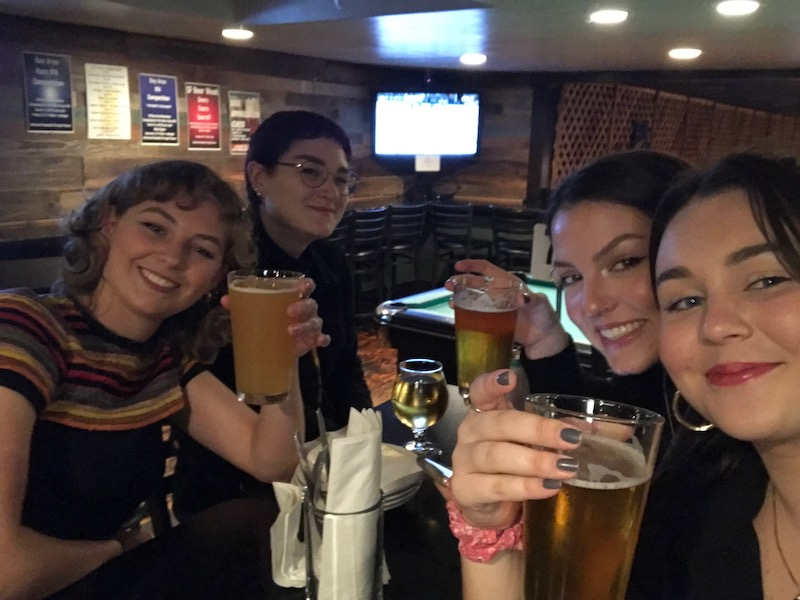 On a normal night out, Meraz-Baca and her friends try to visit bars in their neighbourhood, where she can get a draft IPA for $US7 to $US8.

While Meraz-Baca usually steers clear of the trendy bars and restaurants, occasionally she will treat herself to a cocktail, which can cost $US16 or more. She says adjusting to the going-out prices in San Francisco has definitely been difficult.

While Meraz-Baca can sometimes justify paying for a cocktail, the city’s $US25 brunches still blow her mind. 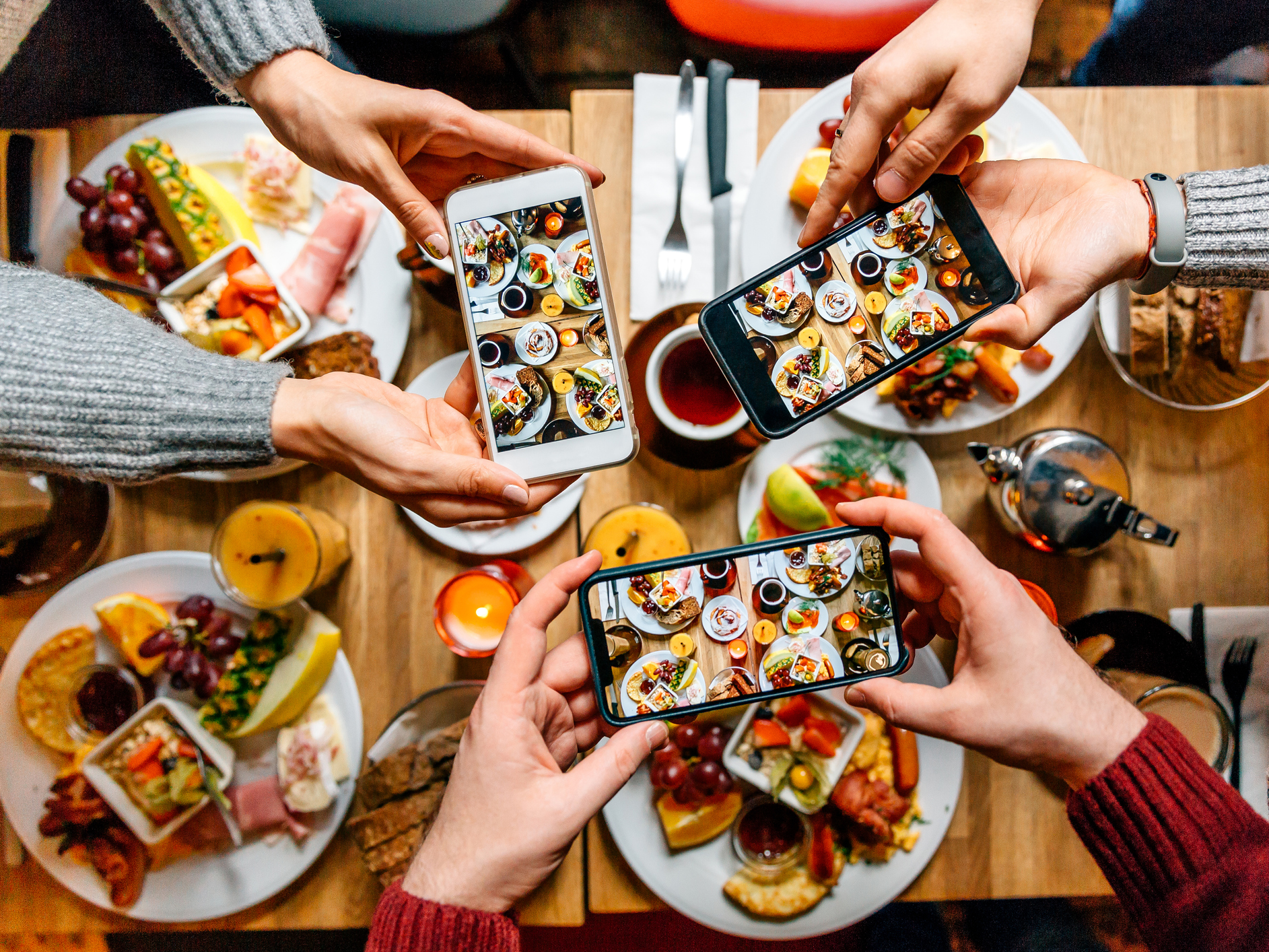 Alexander Spatari/Getty ImagesShe tries to avoid the classic brunch spots across the city.

For Meraz-Baca, going out to breakfast is easily avoidable and ends up saving her a large chunk of her paycheck, but she said it is hard watching the city change and cater to the “Silicon Valley-style.”

It’s common to see fast-casual restaurants brimming with diners during lunch breaks, but for Meraz-Baca, even a casual lunch out is usually avoided. 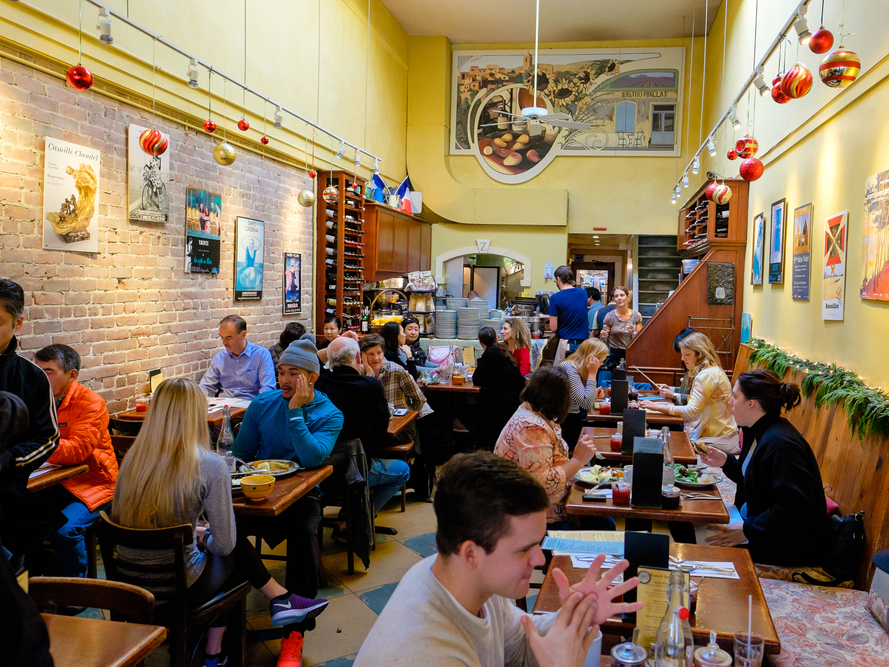 Joshua Rainey Photography/ShutterstockA restaurant is packed with people during lunchtime.

Starting in the morning, coffee shops are overflowing with people.

“A coffee can cost anywhere from $US3 to $US8,” Meraz-Baca said.

For lunch, a meal from a local sandwich spot can cost anywhere from $US10 to $US15. “If you are going to a corner store or deli, a sandwich would be cheaper, probably $US8 to $US9.”

Considering the high prices, it’s out of necessity that Meraz-Baca packs her breakfast and lunch, and then returns home to cook dinner every night.

Meraz-Baca said that while the upmarket side of San Francisco exists, the city still has an entirely different side, and living on her entry-level salary is possible. 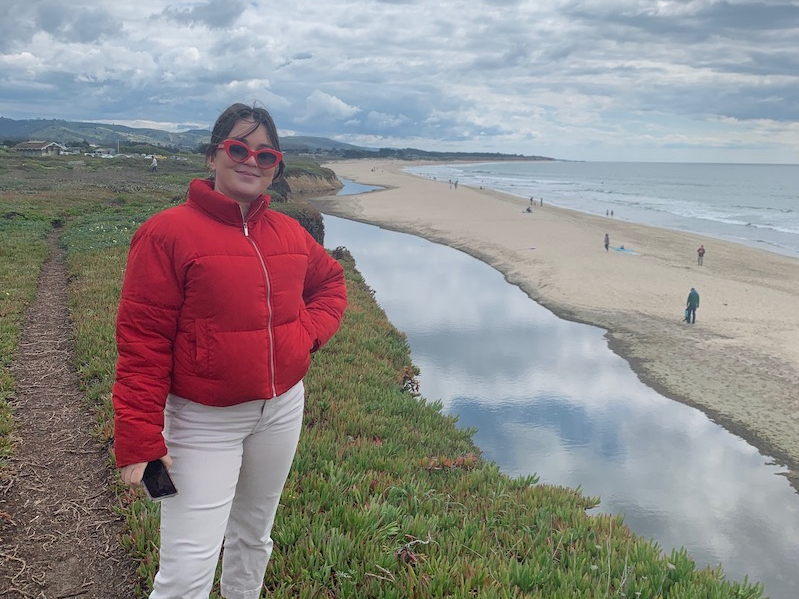 Photo courtesy of Leila Meraz-BacaMeraz-Baca on a hike along the coast.

Reflecting on her budget and living situation, Meraz-Baca is relatively pleased. She said she has managed to side-step most of the expensive traps of San Francisco by cutting out splurges and predominantly paying only the necessary costs and utilities.

Even so, she admitted, “I don’t have enough money to save to travel … Most of the money you make just becomes what you spend.”

According to a previous Business Insider article, a survey by Insider and Morning Consult found that while 70% of millennials have a savings account, 58% have a balance under $US5,000.

In order for Meraz-Baca to live comfortably on an entry-level salary in San Francisco, the biggest sacrifice she needs to make is saving for her future. She has no 401(k) and is unable to put money towards her savings.

Returning back to San Francisco meant Meraz-Baca had to re-learn how to budget to keep up with the rapidly changing city. But overall, she managed to adapt and master crucial budgeting skills early on in her career.