What it's like to be a student at Notre Dame right now, where coronavirus cases spiked one week into the fall semester and lectures are being held in stadiums 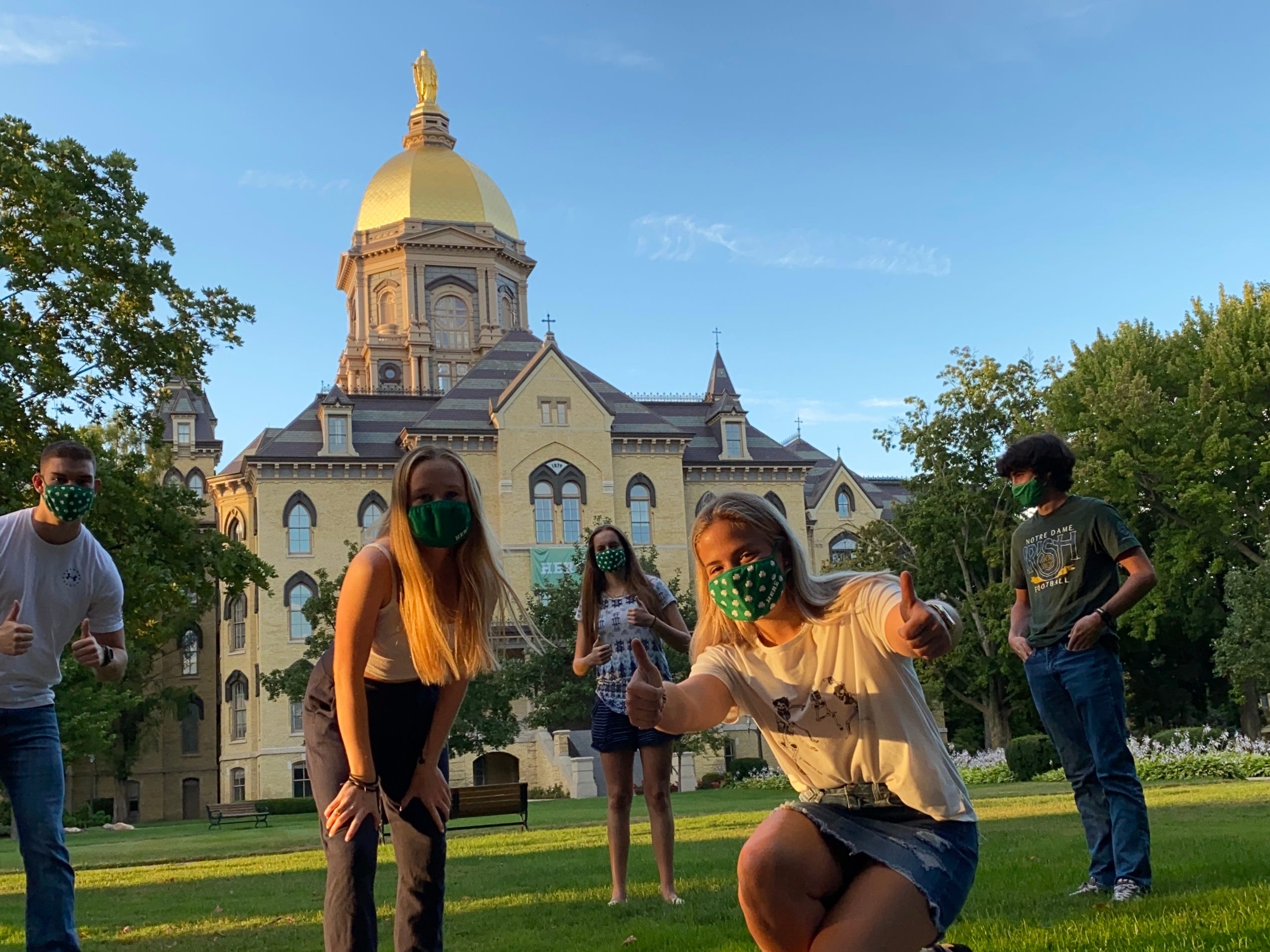 When Natalie “Nat” Todaro has to get to class, there are a few flights of stairs involved.

That’s because the University of Notre Dame sophomore had one course on the seventh floor of the school’s stadium. Most of her courses are online, but the ones that are in-person â€” as part of the school’s hybrid courses â€” have been meeting in “weird spaces.”

The school invited back all undergraduates to campus in August 2020.

Classes began on August 10, and, as the New York Times reports, one week into the fall semester courses went completely remote after a spike in cases. Students remained on campus, and further restrictions were put in place.

But the school has since phased back into in-person courses after cases dropped, according to the Concord Monitor.

Todaro has been on campus throughout it all.

“Everyone wants to be here,” Todaro said. “The experience here on campus is unlike anything else; it’s just special.”

Here’s what it’s like to be a student at University of Notre Dame right now. 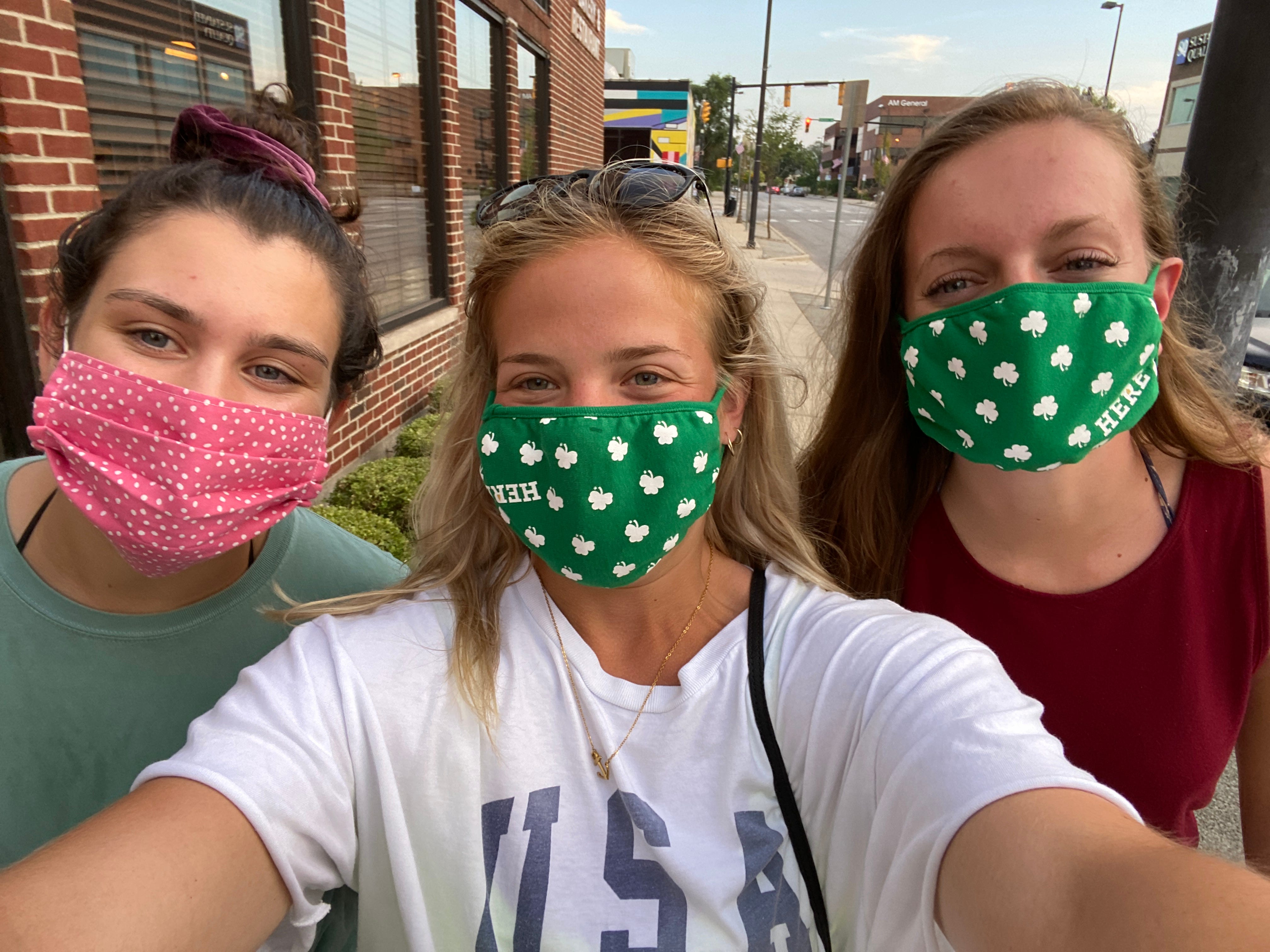 She returned to Notre Dame – which is just north of South Bend, Indiana – on August 4, and officially moved back in on August 6.

The school began on August 10, two weeks earlier than usual, and the fall semester has been compressed to end before Thanksgiving; in a normal year, it would end before Christmas.

Todaro said that balancing new safety guidelines, the strain of the pandemic, and a compressed semester has sparked conversations in her friend group around mental health.

“I mean, within the first week, all of us were talking, we just sat down and were like, ‘Anyone else feel like we’re already burnt out?'” she said. “Because the semester had already been squished together. So classes kind of jumped right in.”

In-person classes have definitely been a “little bit different.” One of her two morning classes is in a campus ballroom. 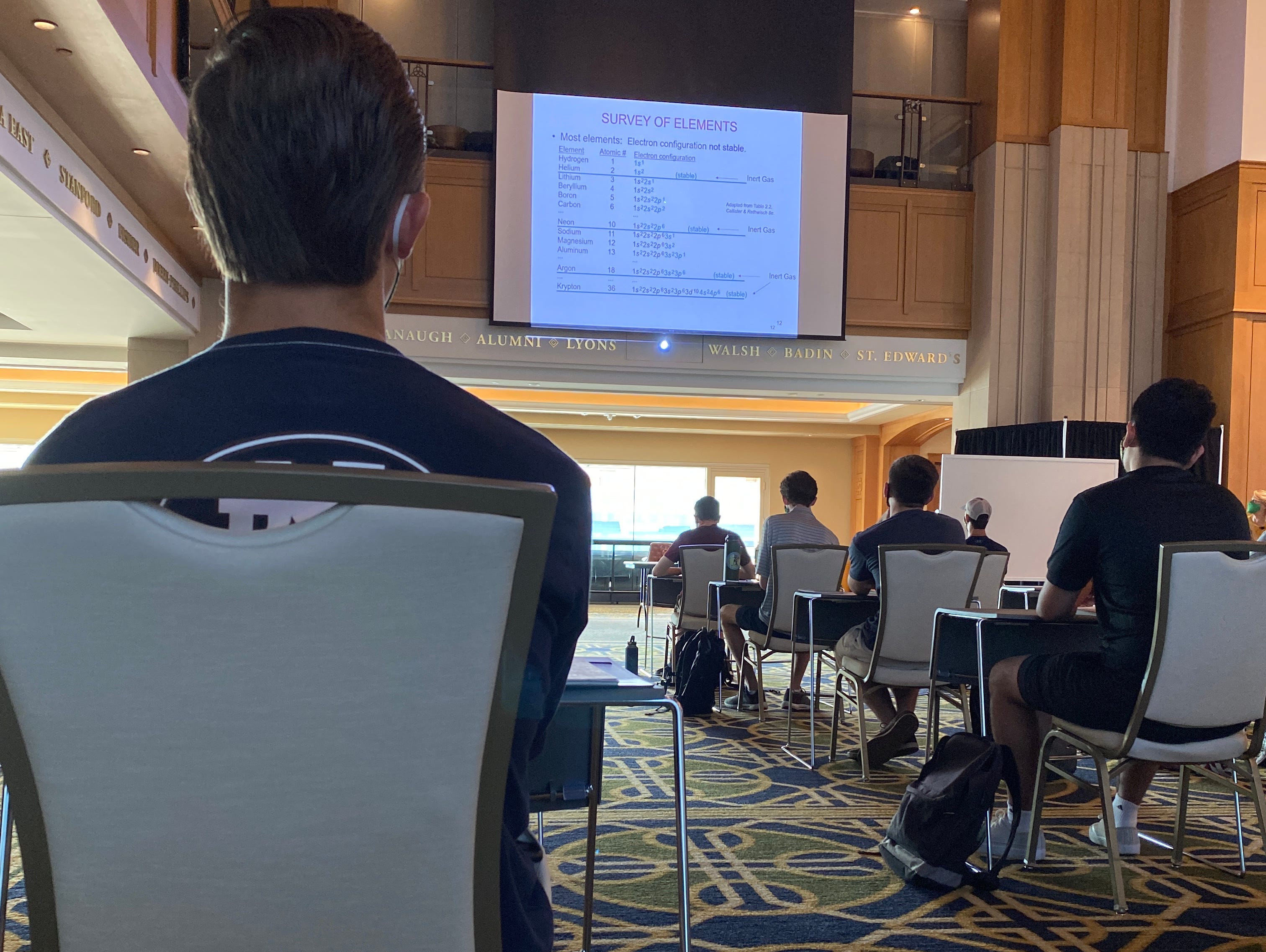 Chairs are spaced out, and everyone had to wear a mask during class time.

But beyond the distancing measures, Todaro said the experience wasn’t too far off from her pre-pandemic courses. Both of the classes she had in-person were lectures, so “we’re just sitting there and not talking – just taking notes.”

Paul Browne, vice president for public affairs and communication, told Insider over the phone that unique spaces, like ballrooms, were utilised for teaching so that students could have over six feet between them – and to ensure that professors could keep an adequate distance.

Her other in-person lecture course was on the seventh floor of the school’s stadium. 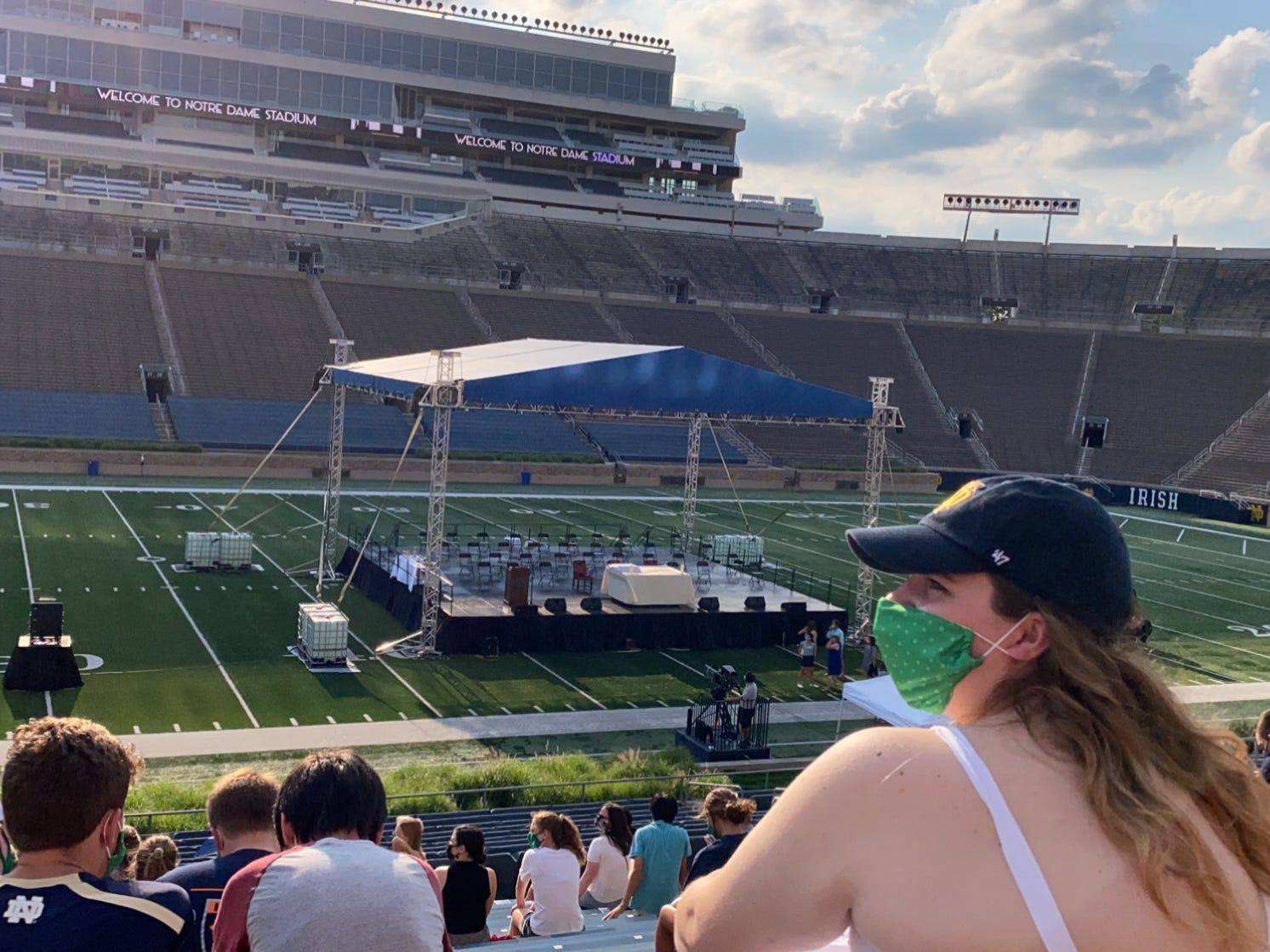 While these may not look like your typical college courses, Todaro realised how impactful the experience of in-person learning was once the school shifted back to temporary remote learning.

After her weeks of fully online courses, “I would give anything just to go back to that [in-person lectures].”

Especially after many colleges abruptly closed and shifted online in the spring semester, students were “freaking out” when they learned an announcement about the future of classes was going to be made.

“We knew we had about two weeks either turn it around or go in a different direction,” she said.

She said that it was “good news” when students received the announcement about returning to hybrid courses.

“When we came back there was a recommitment to abiding by the health protocols that’s resulted in a turnaround,” Browne said. “We believe that we have much greater engagement by students and everyone else in observing our safety protocols.”

The dining hall used to be a huge social experience. Todaro said that she was concerned about only being able to dine in a tent or in her room, but students have adapted — like eating on the lawn. 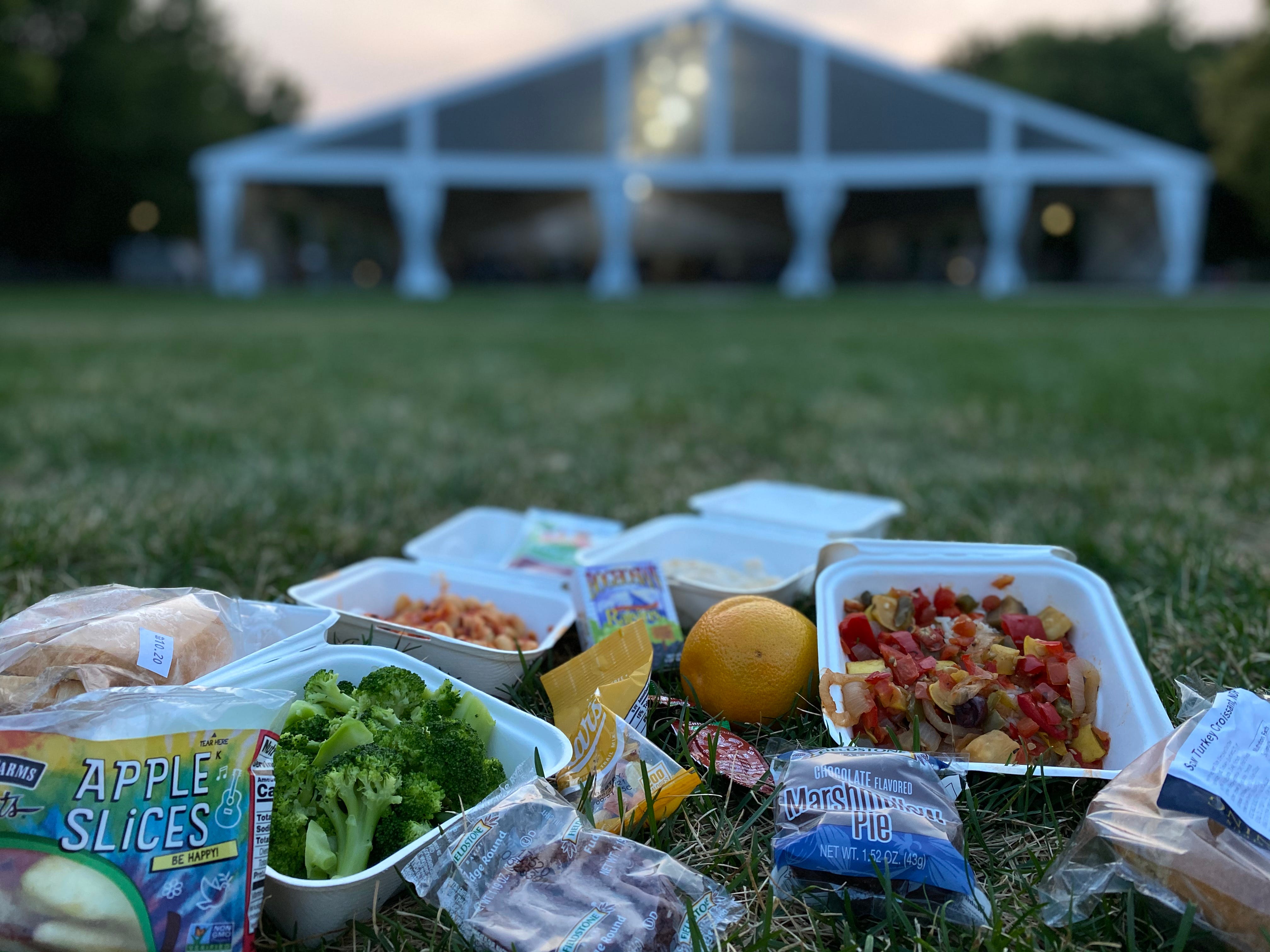 Natalie TodaroEating dining hall meals out on the lawn.

Todaro said that students have been eating out on the lawn, something that she was sceptical about at first. But, even though students may not be sitting around communal tables and hugging friends in the dining hall, Todaro said it’s been a surprisingly pleasant experience.

“It’s been really nice to see all the life on campus,” Todaro said, “and even social distancing people have been able to still build that community that we’ve all been missing.”

She said that she and her friends go “above and beyond” to get meals together.

Todaro is in a double room, but she and her roommate decided to partition off the layout to make it into two mini-singles. 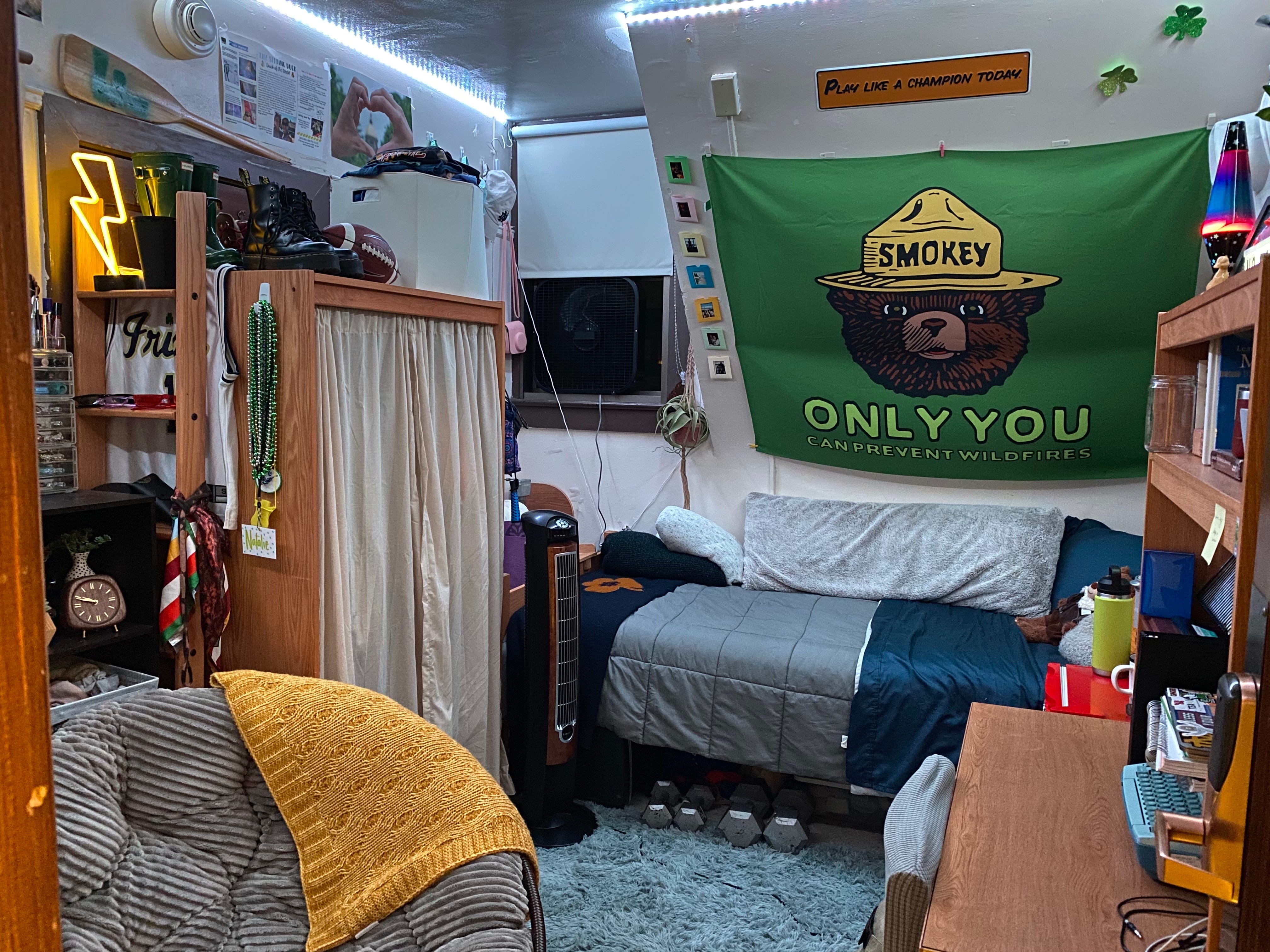 Students weren’t supposed to enter a room that isn’t theirs, and have to wear a mask around anyone who isn’t their roommate.

Todaro said that the halls do have communal bathrooms, and you’re essentially “assigned” to the one closest to you. She said that’s due to contact tracing efforts so that tracers will have a better idea of which students may have shared a bathroom with someone who was potentially infected.

And, for the same reason, everyone also needs to scan a QR code every time they enter or exit a hall.

Browne said that there’s been “tremendous cooperation” from students when it comes to contact tracing.

As a sophomore, Todaro has been hanging out with friends she met last year. She said that many students are making a concerted effort to reach out to freshmen. 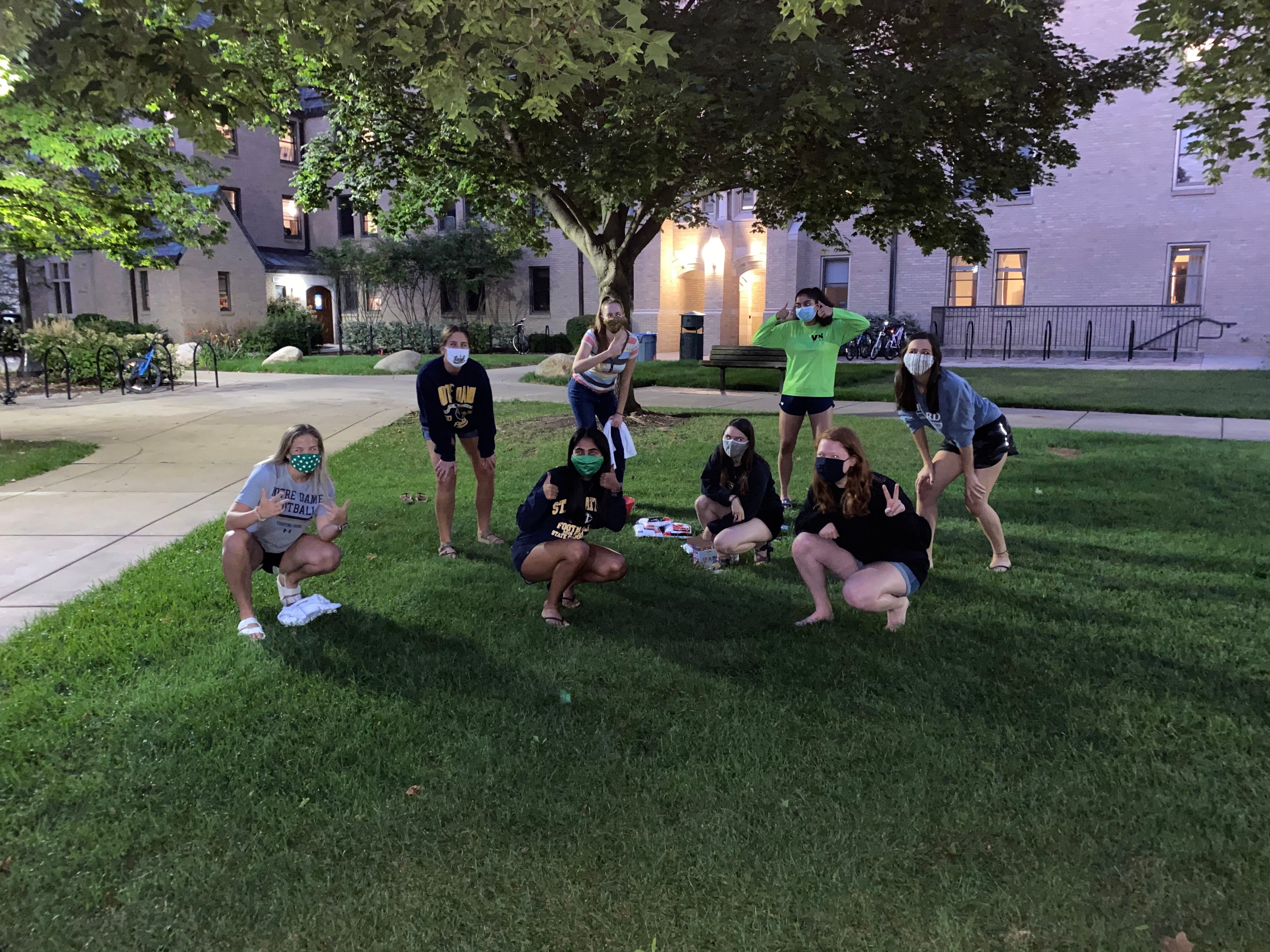 “I think it’s difficult coming in, not knowing anyone, and then being expected to just do college like it’s normal. I know that last year was a really hard year in and of itself, moving away and trying to deal with and basically having full responsibility for yourself for the first time,” Todaro said. “I just can’t imagine how difficult it is – you’re not able to meet with people other than the people you live with.”

She said that weekends have been especially tricky since that’s normally prime social time for college students. The school has tried to plan lots of safe activities for students to partake in, like outdoor socially distanced concerts, fitness classes, and movies projected on the quad, but she said that the school has still had to crack down on students congregating in larger groups.

And, with sports gone, she said she didn’t realise how nice it was to have “football as a break from real life.”

But Todaro and her friends are still finding creative — and safe — ways to be around each other. 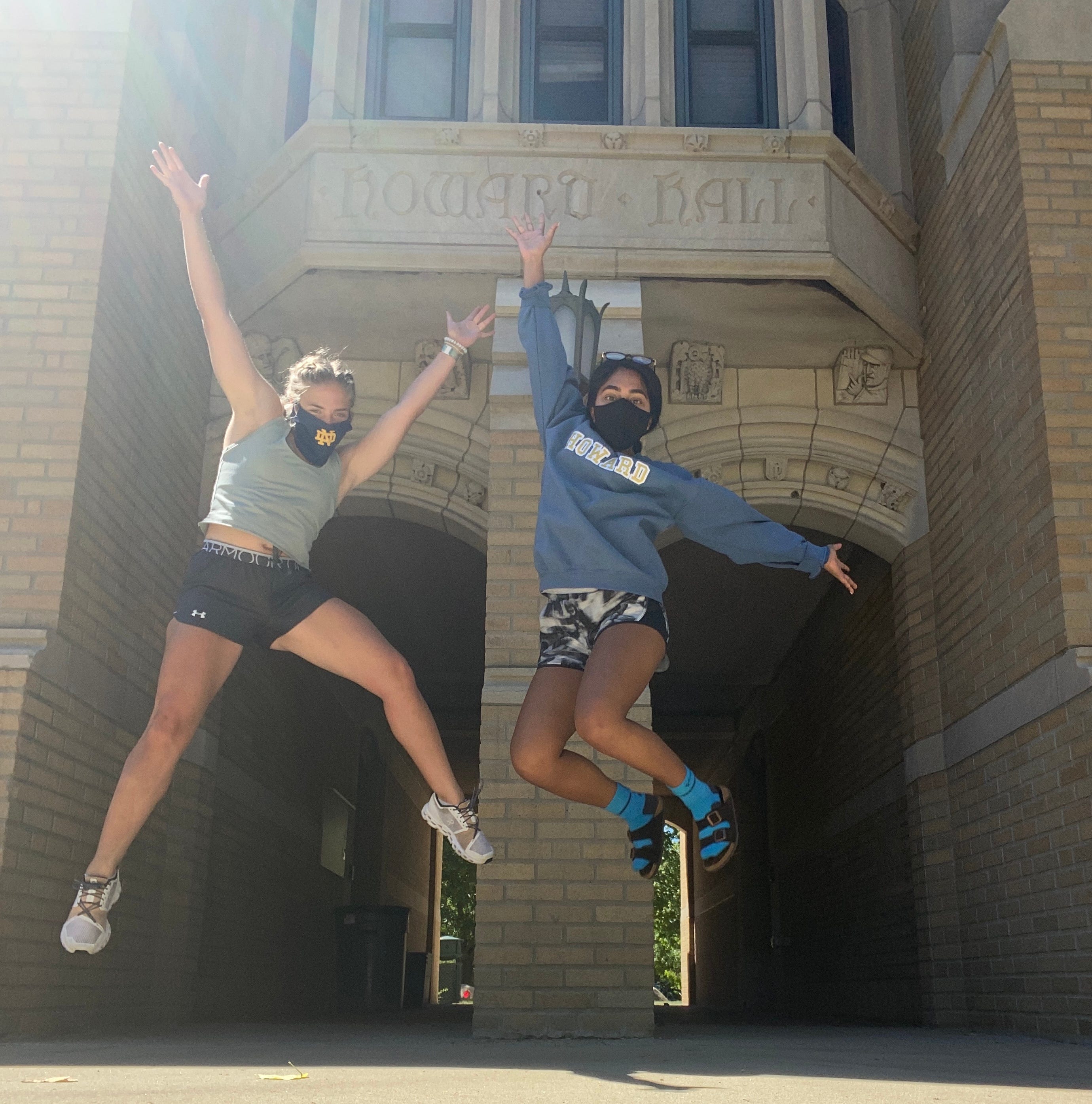 For instance, she said that they will try and coordinate their schedules so they can eat together at a distance, or wake up early and find a distanced study spot where they all can do work.

“It’s almost like being in a classroom, but not quite,” Todaro said.

And the best day of the week is when she and her friends watch a movie out on the quad or go out for long walks and talks around campus.

“After the last six months, especially doing quarantine school back at my house in Tennessee, I would give anything to be able to go on walks with my friends versus being back home.”