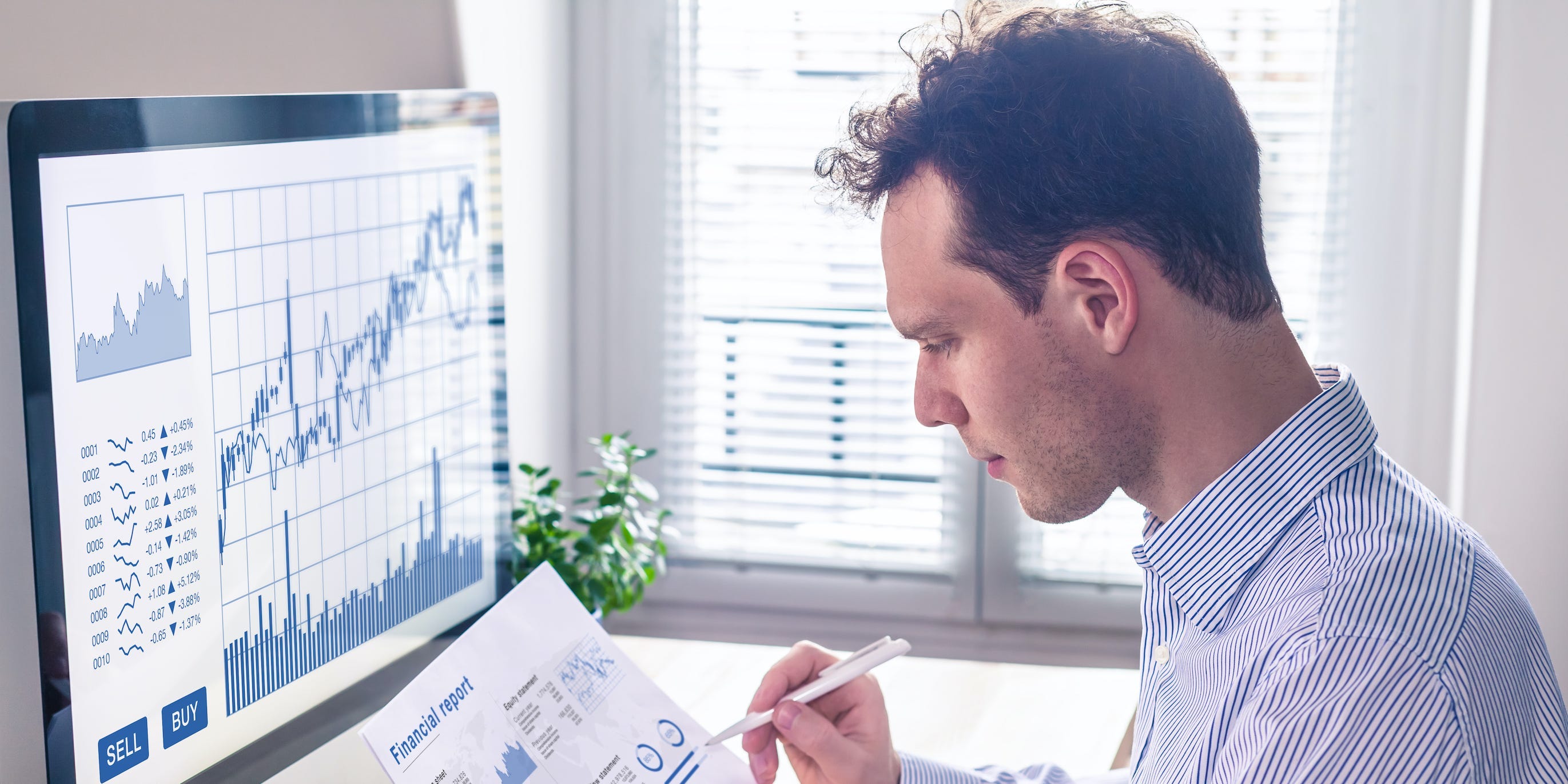 NicoElNino/Getty ImagesThe price-to-book ratio is a metric that analyses a company’s shares against its balance sheet — to see if the stock is over- or undervalued.

A lot of factors go into the decision to buy a particular stock. One, of course, is how well the underlying company is doing. But equally important: considering whether the stock price itself makes sense.

If the price is too high, the stock is said to be overvalued and ripe for a fall, and an investor could end up losing money. On the other hand, they could make a killing if the stock is undervalued, or priced too low.

But how do you tell? One method is to look at a company’s price-to-book ratio â€” or P/B ratio for short. It’s a quick metric that evaluates the market price of a stock and can be used to compare it to others in a similar space. The P/B ratio may signal whether the per-share price is reasonable, lower than it should be, or if it’s pie-in-the-sky high.

Here’s how to figure the P/B ratio, and how to interpret it.

What is the price-to-book ratio?

The price-to-book ratio expresses a company’s stock share price in relation to its book value per share (BVPS). “Book value” refers to a company’s intrinsic, financial worth â€” specifically, the difference between all its assets and all its expenses and debts.

How to calculate the price-to-book ratio

Step 1: Get the current share price. That’s simple enough, since it pops up quickly in an online search using the company’s name or its ticker symbol.

Step 2: Determine the book value per share (BVPS). The easy way is to look it up on a financial stock-listing site (you may have to scroll down a bit to find it).

Or for DIY-ers: The first move is to figure out the “book value,” or “net book value,” which is the difference between a company’s total assets and total liabilities. That begins with looking up the public company’s balance sheet, which can be found on its Form 10-K, or annual report, or the quarterly 10-Q. Both of them are generally available on the US Securities and Exchange Commission site. The balance sheet is also available on a company’s home page, usually by following the “investors” or “investor relations” link.

Then it’s just a matter of simple maths: Book value is the difference between the company’s total liabilities and its total assets as reflected on the balance sheet.

Now, finally, you can determine the book value per share. That’s also simple maths: Divide the book value from Step 1 into the number of outstanding shares on a particular date (which both the corporate balance sheet or a stock-list site will carry, the latter being the most up-to-date).

That yields the BVPS of a single share of the company’s stock.

Step 3: Divide the share price by the BVPS. VoilÃ ! There’s your P/B ratio.

Significance of the price-to-book ratio

Some analysts say a P/B ratio of less than 1 indicates that a stock is undervalued and, everything else being equal, it may be poised for a rise. A 1 ratio, though, may indicate “fair” pricing, where the market value is equal to the company’s book value. A P/B ratio of 3 or higher, however, could signal a market value that’s too high and may be ready for a fall.

That being said, it’s tricky to determine a single standard for “good” or “bad” P/B ratios. Every industry has a different range; what’s high in one field may be low in another.

That’s because a manufacturer, for example, will have a lot more assets on the books, than, say, a services company. Or a trucking operation will have more overhead expenses than, say, an online bank.

Differences like that could lead to unrealistic company-to-company comparisons. So, while P/B ratio analysis may be useful in weighing valuations between companies, investors should be careful to compare “apples to apples,” or companies in similar industries.

That’s one reason the P/B ratio is a tool to be used in conjunction with others â€” “one of many indicators of relative valuation,” according to Solomon Tadesse, who heads North American equity quantitative research at SociÃ©tÃ© GÃ©nÃ©rale, the multinational investment bank and financial services company.

Example of the price-to-book ratio

If the price of ABC was $US2 a share, then the P/B ratio would be 2, which signals that an investor is paying $US2 for each share of the company’s net book value.

The investor could track ABC’s price-to-book ratio over a period of time, and see if it’s holding steady, rising or falling.

The ratio could also let them compare the ABC company to another one in the same industry, say the XYZ company. If XYZ had a higher P/B ratio â€” say 6 â€” it could signal that the market is anticipating strong earnings growth for this firm, and bidding up the shares in anticipation. An investor might conclude that XYZ was already overvalued.

Conversely, if XYZ company had a P/B of 0.5, the stock price might be considered to be trading at a discount â€” since investors are paying below book value for it â€” and it could be a bargain. Then again, it could be a dud.

How accurate is the price-to-book ratio?

“Price-to-book has a long history, but there are some drawbacks that have driven [it] to fall out of favour among some investors,” Tadesse says.

For one thing, price-to-book “doesn’t account for hard-to-value intangible assets, like patents or other intellectual property,” he says, adding “the book value is an accounting concept that’s generally based on the lower of an asset’s cost or market value. So the book value can understate a company’s per-share net asset value. And by potentially reducing the [book value per share], the price-to-book ratio may appear to be artificially high.”

Let’s look at Microsoft, which posted a net income of $US13.9 billion in the fiscal quarter ended September 30, 2020, up 30% from the same period in 2019. The company derives a lot of its value from patents and other hard-to-value intangible assets, but someone who goes strictly by its 13-plus P/B ratio would say it’s overvalued.

“That’s why a price-to-book ratio, especially as a standalone tool, may not work for tech companies, Tadesse adds. “It’s designed more for capital-intensive, ‘old economy’ companies like manufacturing firms.”

Still, advocates of value investing â€” who seek out low-performing but intrinsically solid stocks with the goal of profiting when their prices rise again â€” often swear by the P/B ratio. It’s a quick trick to analyse the stock price against the company’s balance sheet â€” its financial fundamentals â€” and sniff out a bargain.

P/B analysis may also be particularly useful for stocks in cyclical sectors, which rise during boom economic times but see prices fall during recessions, even though their underlying fundamentals appear to be sound. “Value investors tend to favour cyclical stocks,” notes Tadesse, “especially if they can get in right before a recovery.”

A P/B ratio can offer some clue about whether an individual stock is a good buy, in relation to others in its industrial segment, or sometimes even the market overall. Focusing on fundamentals (the book value) vis-Ã -vis the share price, it can tune out speculative static that is currently distorting prices up or down. Comparing a single company’s P/B ratio over time may help indicate whether it’s likely to do better or worse in the future.

But the P/B ratio is at the end of the day only one way to evaluate a stock. As Tadesse says, there’s a lot of data out there to consider â€” a veritable “zoo of valuation ratios.” And on top of that: how you like the looks of a company and the product it provides.

What is the P/E ratio? An analytical tool that helps you decide if a stock is a good buy at its current price

How to invest in dividend stocks, a low-risk source of investment income

What is a stock split, and is it a good or bad sign when it happens?

What is growth investing? A strategy that focuses on high-growth companies in hopes for significant investment returns