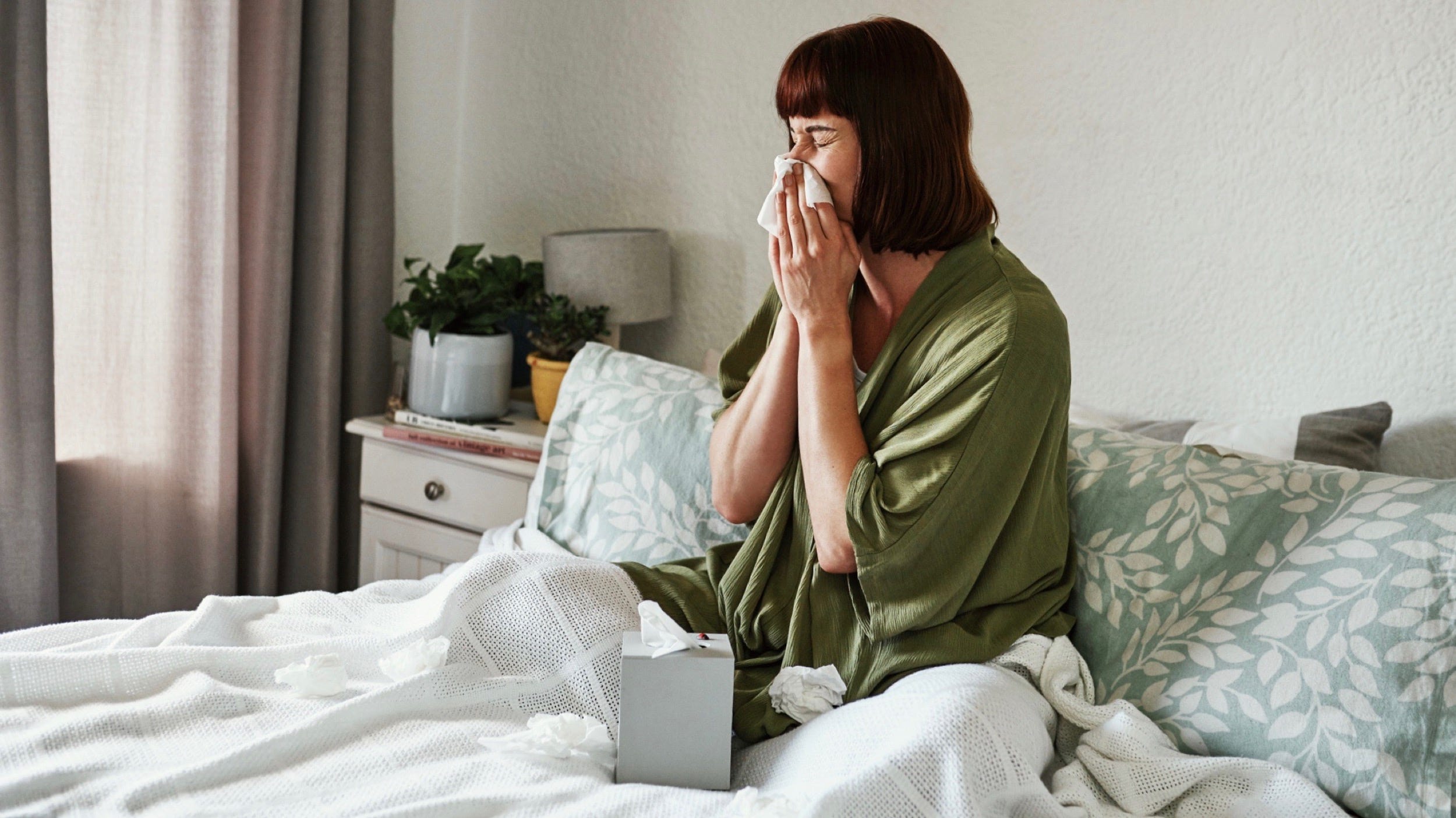 PeopleImages/Getty ImagesPerennial hay fever can hit year-round and are often caused by indoor substances like dust or mould.

The symptoms of hay fever can feel a lot like having a cold – you may be coughing, sneezing, or have a runny nose. But unlike a cold, hay fever is caused by an allergic reaction, not a viral infection.

Here’s what you need to know about how hay fever affects you and what you can do to treat it.

What is hay fever?

Seasonal allergies are generally caused by pollen and shift from season to season, depending on which plants are blooming. Most people tend to have worse allergies in the spring.

Perennial allergies can hit year-round and are often caused by indoor substances like dust or mould.

When you have an allergy to something, it means that your body overreacts to substances that are generally harmless to other people. For example, when you breathe in tree pollen, your immune system identifies that pollen as a dangerous foreign invader that must be destroyed.

In response, your immune system produces antibodies that then trigger the release of chemicals, called histamines. These histamines are what cause the runny nose, itchy eyes, and sneezing that are common symptoms of hay fever. And it’s these symptoms that are meant to help you expel the allergen from your body.

Some common triggers of seasonal allergies are:

Triggers of perennial allergies include:

Allergies can also be triggered by substances that irritate your sinuses like perfume, cigarette smoke, and car exhaust.

Most people are familiar with common allergy symptoms, but there are many other effects of hay fever, including some that can cause serious problems.

Some allergy symptoms include:

If you start to feel unwell, there are a few key signs to help you tell the difference between allergies and a cold.

Hay fever generally doesn’t cause symptoms like fever, decreased appetite, muscle soreness or gastrointestinal side effects, while some colds can, says Sedaghat.

“Symptoms of the common cold and the flu often will also start to improve after 3-5 days,” Sedaghat says, “while allergies, in particular seasonal allergies, may linger for longer.”

You can also tell the difference between allergies and the COVID-19 coronavirus because COVID-19 rarely has any nasal symptoms like stuffy nose or sneezing, Sedaghat says.

This chart shows the difference in symptoms between COVID-19, the common cold, the flu, and allergies like hay fever: 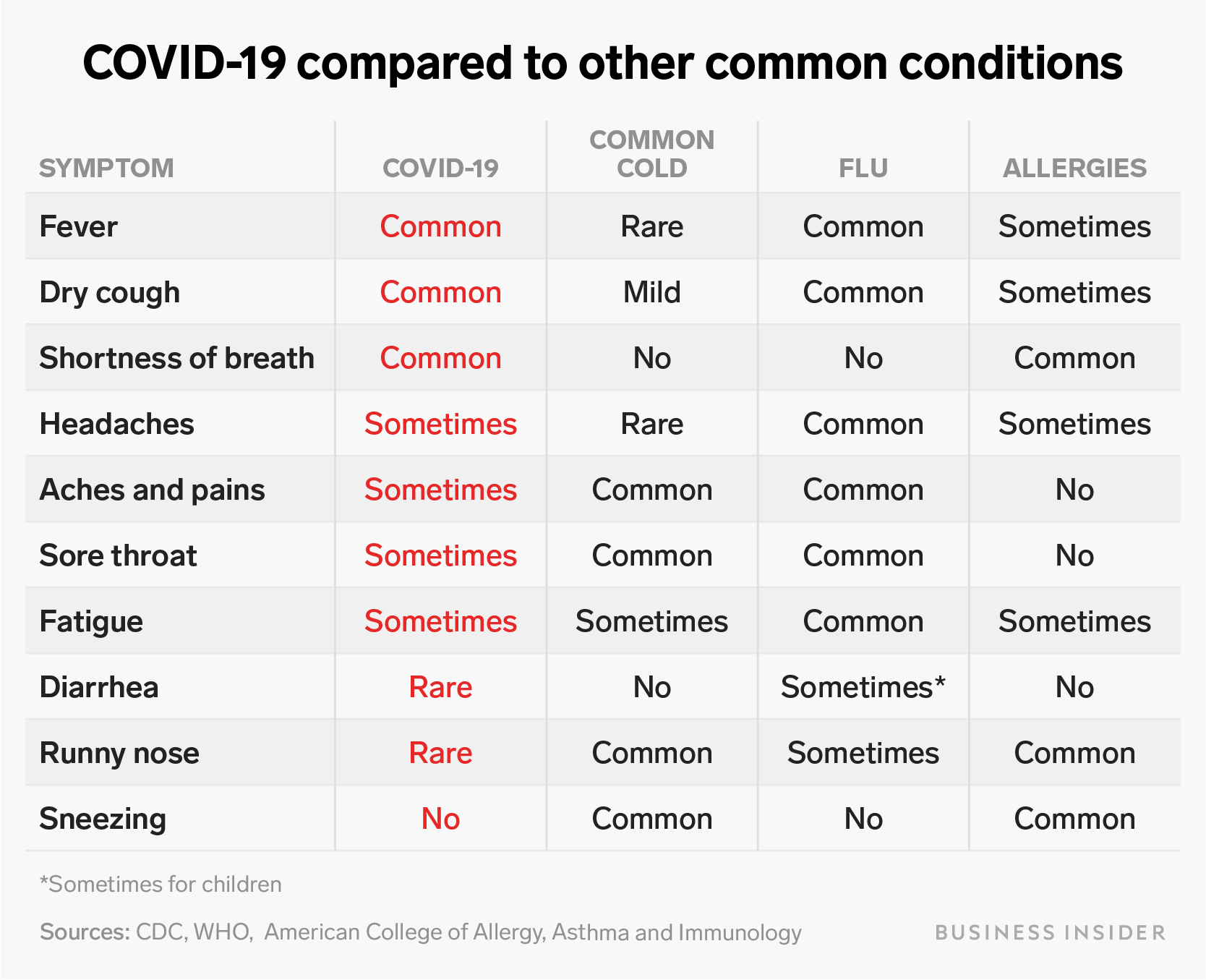 For very young children, hay fever can cause moodiness because they are distressed by their symptoms and can’t express how they feel. Children suffering from allergies may act out at home or at school.

Children with allergies can also develop ear infections from fluid build-up and this can impair their hearing. For babies, it’s especially important to treat ear symptoms, as they can interfere with speech development.

Having a stuffy nose can also be a serious issue, as children may begin breathing through their mouths, which can cause problems with the growth of their teeth.

How to treat hay fever

There are three primary ways that allergies can be treated:

If your allergies are not under control using avoidance and over-the-counter medications, you should see a doctor or an allergy specialist to explore your treatment options.