What is a bear market? How to make sense of a prolonged period of decline in the stock market and invest wisely 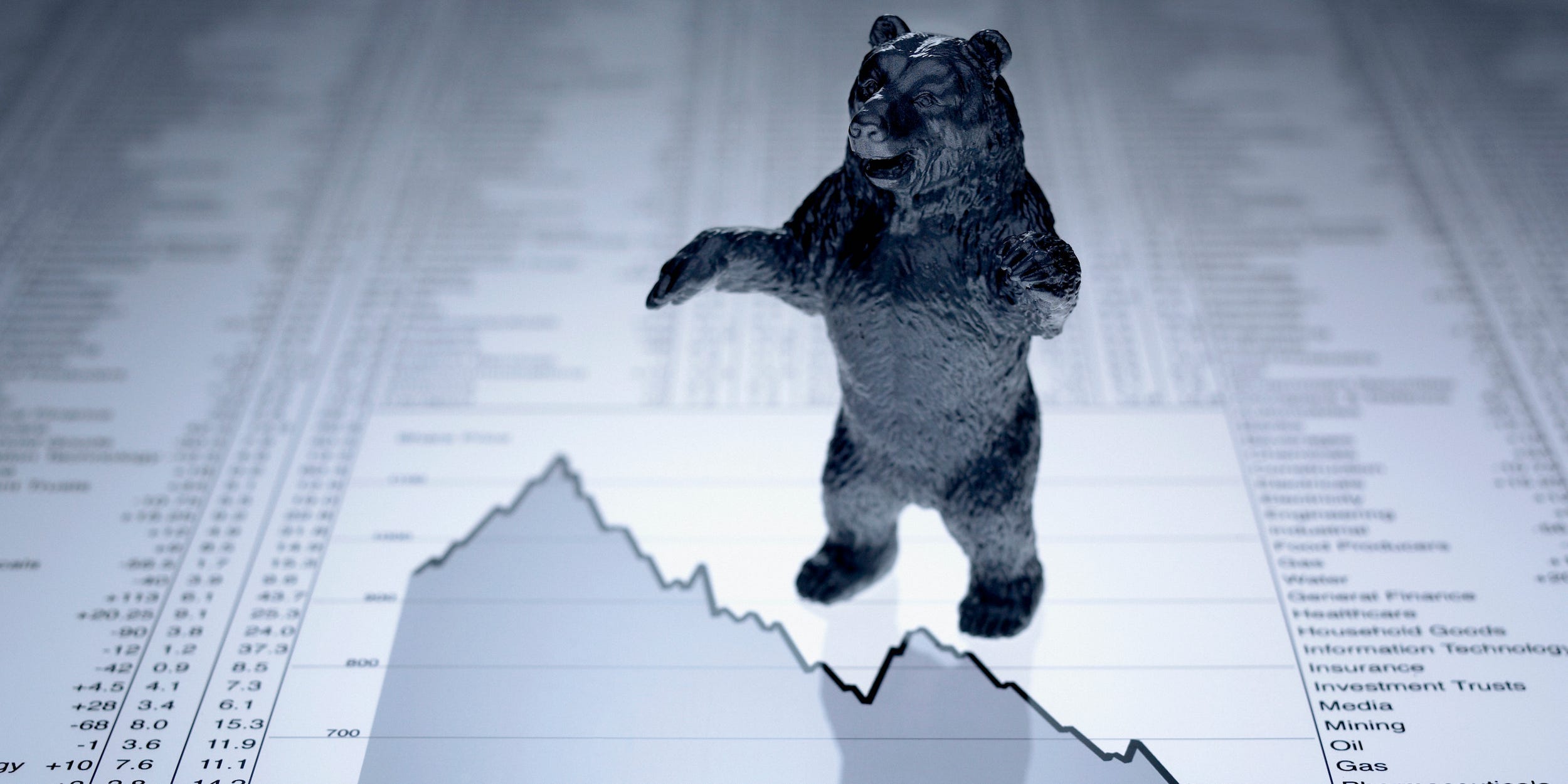 Adam Gault/Getty ImagesA bear market is an extended period of plummeting prices or little growth in the stock market.

To the average investor, a bear market can be as terrifying as a seven-foot-tall grizzly. It’s synonymous with bad news, economic downturns, and overall negativity.

But bears are a natural part of the ebb and flow of the financial markets. Let’s track their movements.

What is a bear market?

A bear market is defined as a prolonged period in which investment prices plummet at least 20% from their historical average. A market must fall 20% or more from its most recent high to be considered a bear market, where it remains until it rises 20% from its lowest level.

The term usually refers to a downward move in the stock market â€” specifically, one of the major indexes: the Dow Jones Industrial Average,the S&P 500, or the tech-oriented Nasdaq. However, it can also be applied to any other asset that slumps for an appreciable amount of time.

Economists and etymologists alike love to debate how bear markets got their name, but it most likely arose from an old proverb about how it’s bad “to sell the bear’s skin before one has caught the bear,” meaning to unload something you didn’t actually own. From there, “bears” came to be a slang term for speculators betting that prices were going to drop.

The opposite of a bear market is a bull market, a buoyant period of rising prices. You can keep them straight by envisioning the two animals’ characteristic behaviour: a hibernating bear (a sinking or sluggish market) and a charging bull (a surging market).

Bear markets shouldn’t be confused with corrections, which are a drop of more than 10% but less than 20%. According to the Schwab Centre for Financial Research, of the 22 corrections that occurred between November 1974 and early 2020, only four progressed into actual bear territory. Those occurred in 1980, 1987, 2000, and 2007.

Bear markets shouldn’t be confused with recessions, either: That’s when the gross domestic product suffers at least two quarters of decline, signifying reduced economic output. Although the two often move in tandem, it’s possible to have a bear market without a recession, and vice versa.

Key traits of a bear market

However, bear markets are often triggered by an economic downturn â€” a contraction phase in the business cycle. Negative news or events can also cause stocks to change course.

The main characteristics of a bear market include:

How long do bear markets last?

Bear markets can last for any length of time. Investors distinguish between “cyclical” and “secular” bear markets, which differ in their time frame. Cyclical bears tend to be short-term, lasting a few months. Bears that are “secular” can endure from five to 25 years.

Secular bears aren’t one long slide downward, either: During “bear market rallies,” for instance, stock prices rise for a time before plunging again, to new lows.

Because the low-point can only be figured out retroactively, after the market’s definitely on the rebound, there’s always a lag before you can declare a bear market definitely over. (Bull markets have the same issue.)

As of fall 2020, the US is in a bull market. It followed on the heels of the shortest bear market in history, which lasted just 33 days, from February 19, when the markets started declining, to March 23, when they bottomed out. Like everything else about 2020, this was extraordinary, since every other bear market has lasted much longer.

Although the economy remains wobbly, the quick flip to a bull implies that investors think that the COVID-19 pandemic will be overcome relatively quickly, perhaps through the development of a vaccine.

Tips on investing in a bear market

Bear markets are bad news to most investors since it’s harder to make money when they are happening. But you won’t necessarily lose money, either â€” especially if you’re able to hold on until prices rise. Of course, that could take some time, and it can be painful playing the waiting game.

Here are a few other time-tested ways to weather a bear market:

Hardly anyone is happy when the bears show up on Wall Street, but they are an inescapable fact of the financial landscape. Although they can cause pain, they can also induce a necessary cooling-off period for the stock market. And they help distinguish truly valuable investments from those that were overly inflated when the bulls were in charge.

Why double-dip recessions are especially difficult, and what they mean for the general state of the economy

Depressions and recessions differ in their severity, duration, and overall impact. Here’s what you need to know

2 steps to take to protect your money from a recession, according to a financial expert and bestselling author

The bear market and recession are over and the S&P 500 is ‘fully priced’ with little room to run upward, investing legend Byron Wien says