My Disney World wedding cost $25,000. Here are 9 things that surprised me the most while planning it. 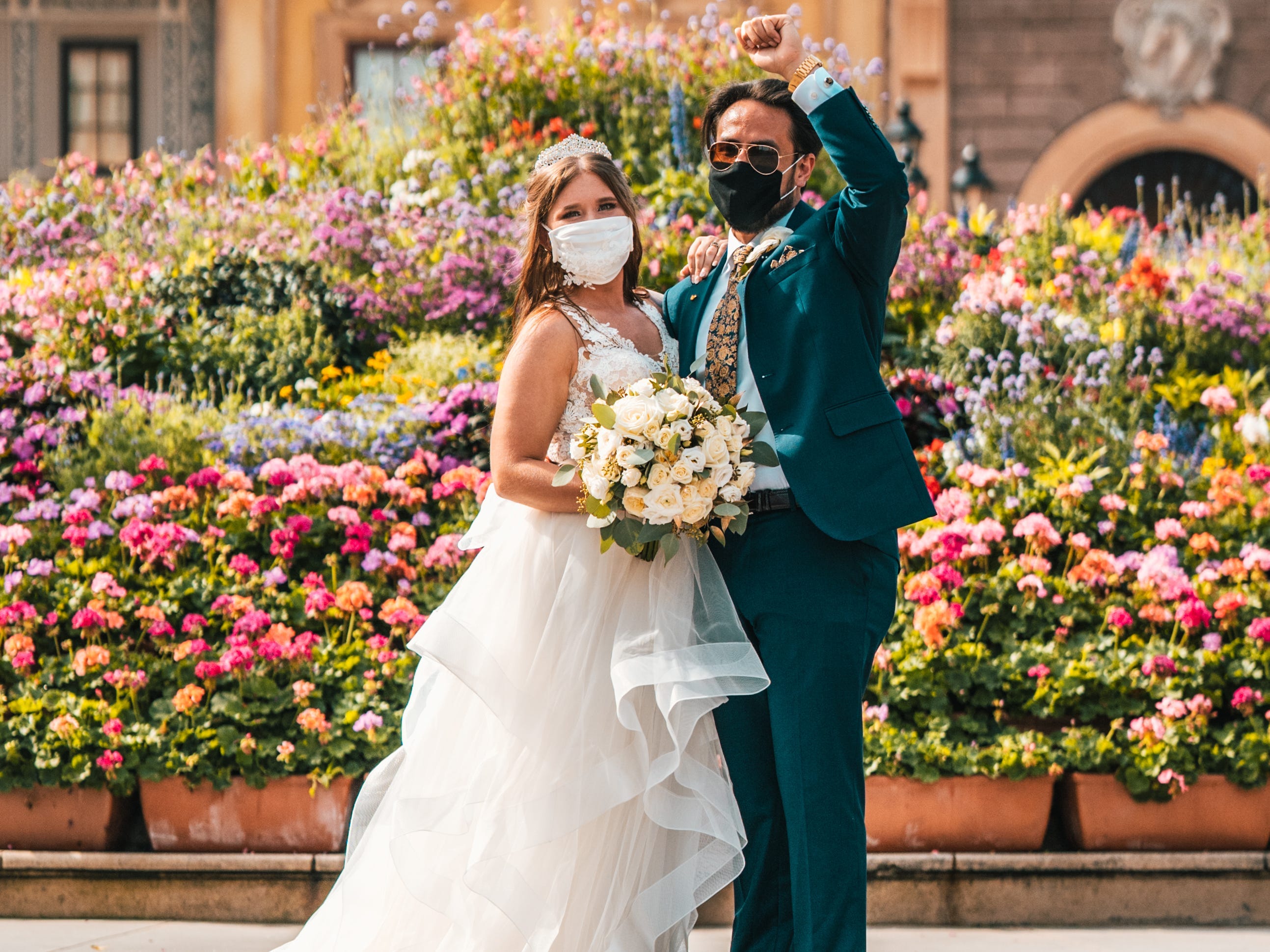 Tyler Maness/Hyped VisualsMy husband and I had a small Disney wedding instead of a large traditional one.

Earlier this year, the pandemic left me ditching the massive traditional ceremony of my dreams to plan a Disney wedding I never thought I could afford.

Originally, my fiancé and I had planned a 400-person wedding in Oklahoma City with all our friends and family. But amid the pandemic and changing state guidelines, we cut our guest list down to 27 people, and I started looking into something that I’d never thought was a possibility: a wedding at Walt Disney World.

Planning a Disney wedding was nothing like I imagined, and I was blown away by the venue, food, event, details, and overall cost.

Keep reading for the biggest things that surprised me about planning my dream Disney wedding on a budget.

When I started planning, I (naturally) envisioned Cinderella’s castle. But most of my guests aren’t huge Disney fans like me, and I didn’t want my ceremony to completely feel like it was at a theme park.

The castle is also one of the most expensive venues, with a starting fee of $25,000, which would eat up our budget.

But there are over 100 Disney venues to choose from, and they start at $2,500. Spots such as Fort Wilderness, Luau Pointe, and the Tree of Life – which has a venue fee starting at $4,500 – were definitely more in our budget.

We chose to have our welcome dinner at Tamu Tamu Courtyard in our favorite park, Animal Kingdom. For the ceremony, we wanted something with natural views and plenty of florals, so we looked at some of Disney’s resort locations.

Sea Breeze Point at Disney’s Boardwalk, which overlooks Crescent Lake, was a top contender, but we wanted to get married in the park. Eventually, we landed on Italy Isola in Epcot, which cost $4,500 and included rental fees, chairs, a musician, and a sound system.

We were also lucky to have a date during the park’s International Flower and Garden Festival, which meant we could enjoy all of the flora in the park at no extra expense. 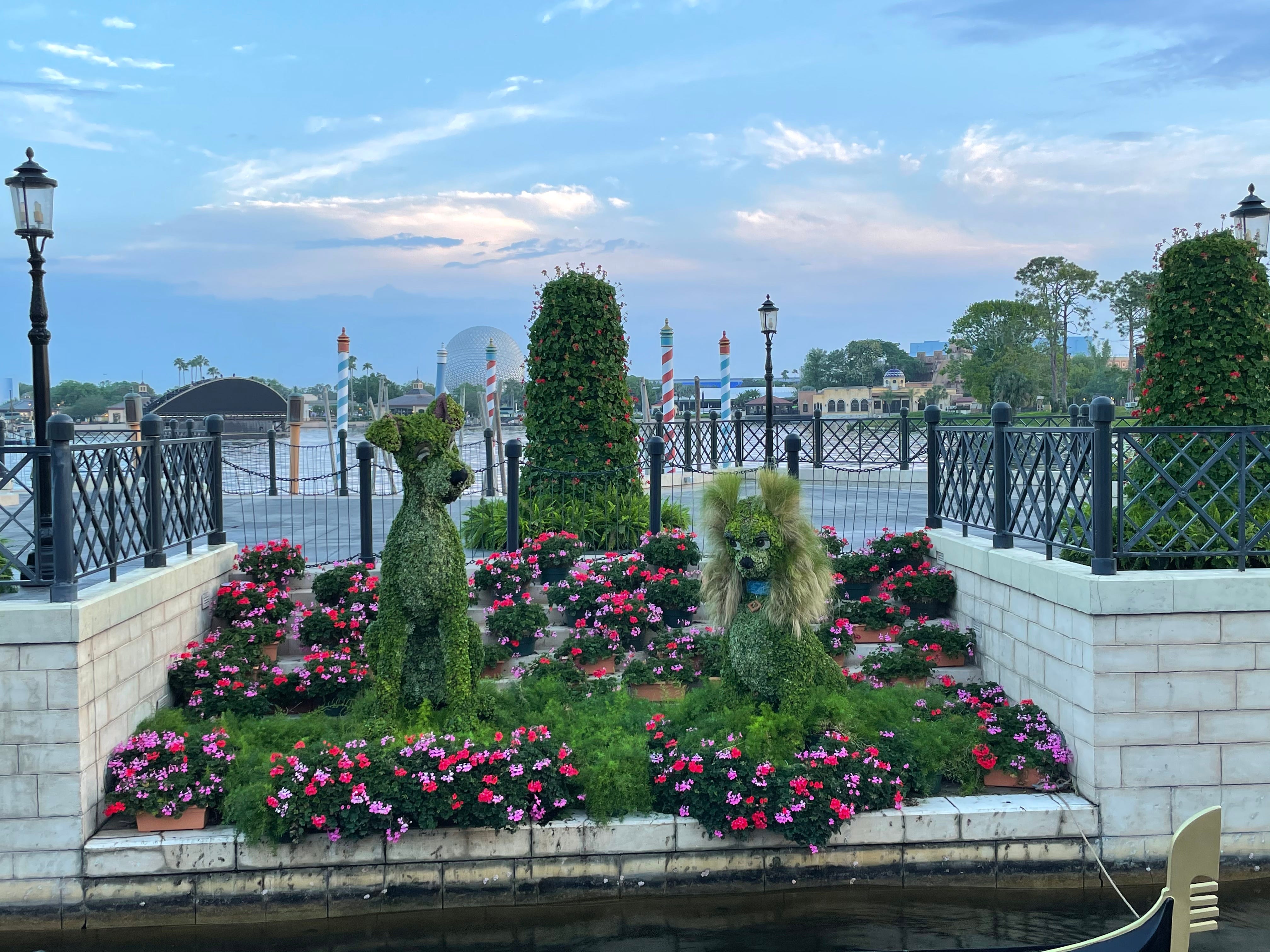 Mystee Yannarella for InsiderThe park looked extra beautiful because I got married during a special festival.

Most venues must work around park hours, but some allow for special ceremony time slots

The biggest drawback of an in-park ceremony is that couples must work around park hours, which means choosing a super early (about 6 a.m.) or late (around 10 p.m.) time slot. 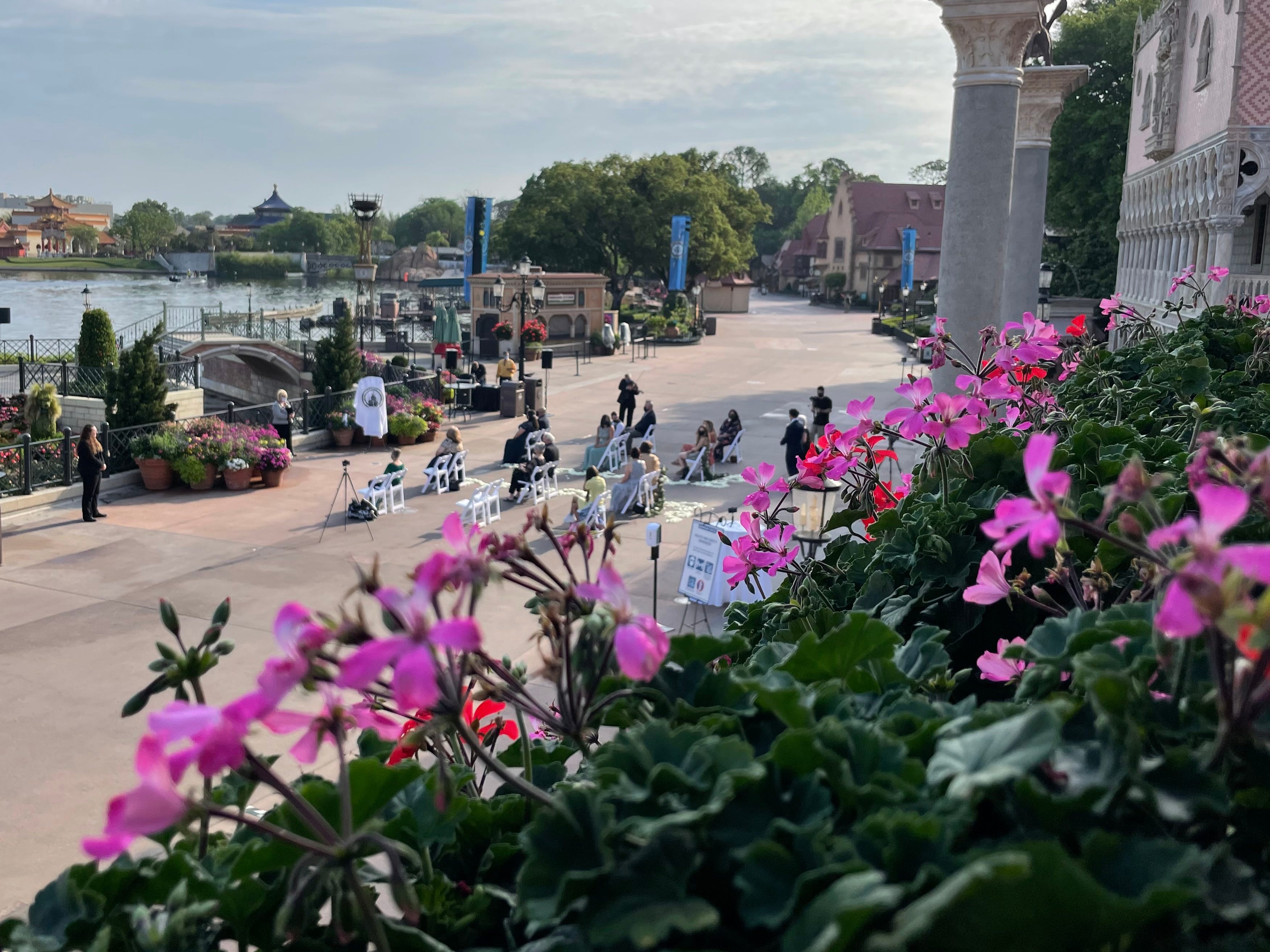 For most venues, including ours, menus are 100% customizable. We went with a standard one for our reception and then modified items based on what we wanted.

For example, we got the famous Mickey-shaped waffles and turned them into an action station, where the chef cooks them and adds toppings of guests’ choice at the reception. We also had action-station crepes and omelets, plus a bar for mashed potato and macaroni.

I also wanted to share my favorite food from the parks with my family. Fortunately, couples can request any food on a Disney property. The culinary team either re-creates it or provides a chef’s interpretation of it – customizations weren’t pricey either; we just paid based on the costs of the items we chose.

Some of the food we served included Sanaa’s bread service, Jiko’s cauliflower bisque and lamb shank, Tiffins’ Lion King dessert, Liberty Tree Tavern’s Ooey Gooey Toffee Cake, and churros drizzled with Oreos. The Grey Stuff from Be Our Guest was our cake filling.

I also love that my husband and I can visit the Disney restaurants in the future to enjoy some of the food that was at our wedding. 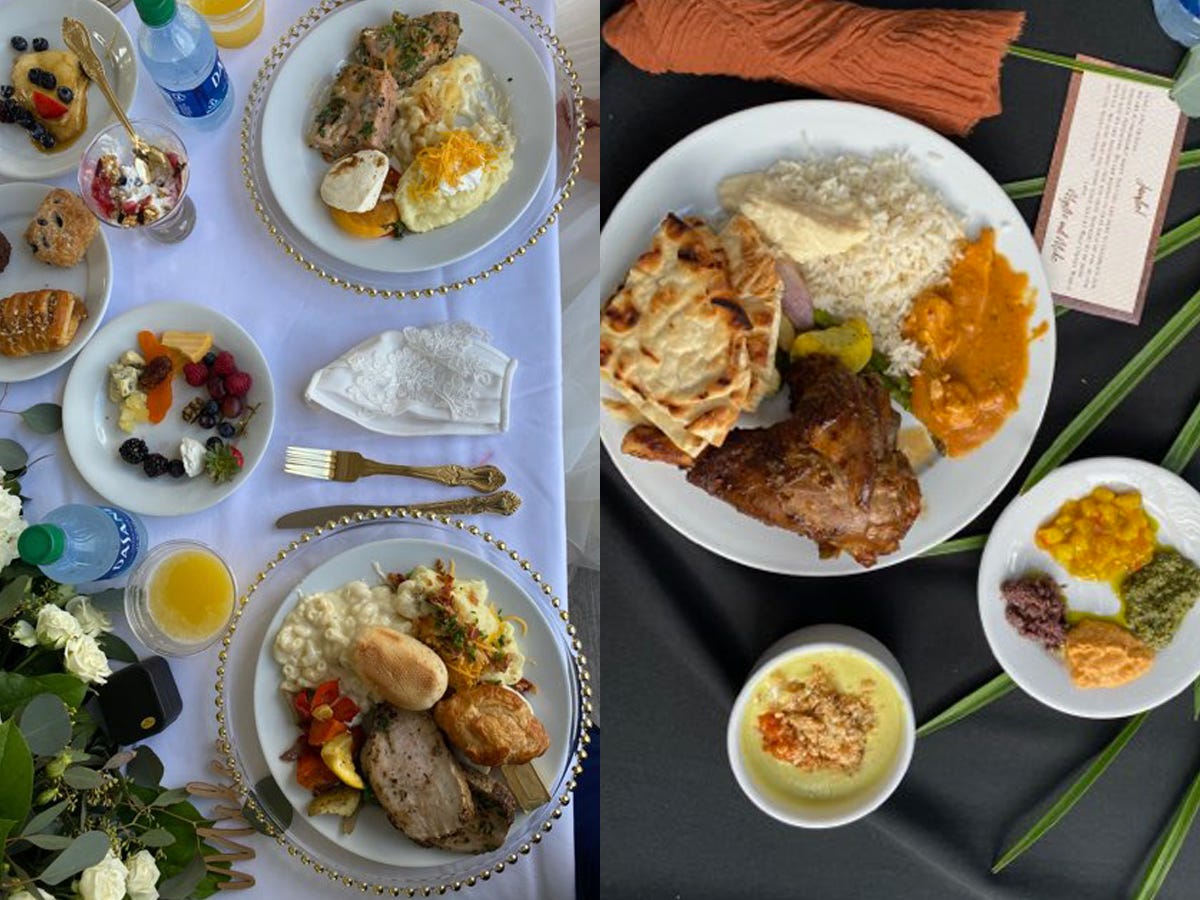 Mystee Yannarella for InsiderChoosing my Disney wedding’s menu was so much fun, and there were a lot of options.

Although Disney food was a focus for us, the chefs aren’t limited to park menus.

Couples can give the chefs a family recipe to re-create, which we briefly considered. I think it’s a sweet way to bring a piece of home to a destination wedding or honor someone who has died.

For an extra fee, our guests got to go on a ride in an empty park

Since we had a small guest list, we definitely splurged on extra events, such as a “ride mix-in” that allowed our guests to go on a private ride after the welcome dinner. It cost under $20 a person, and I was charged only for people who went on the ride.

We chose Flight of Passage, so our guests were escorted to the ride with no wait time. Plus, they got to experience Pandora at night in an empty park. 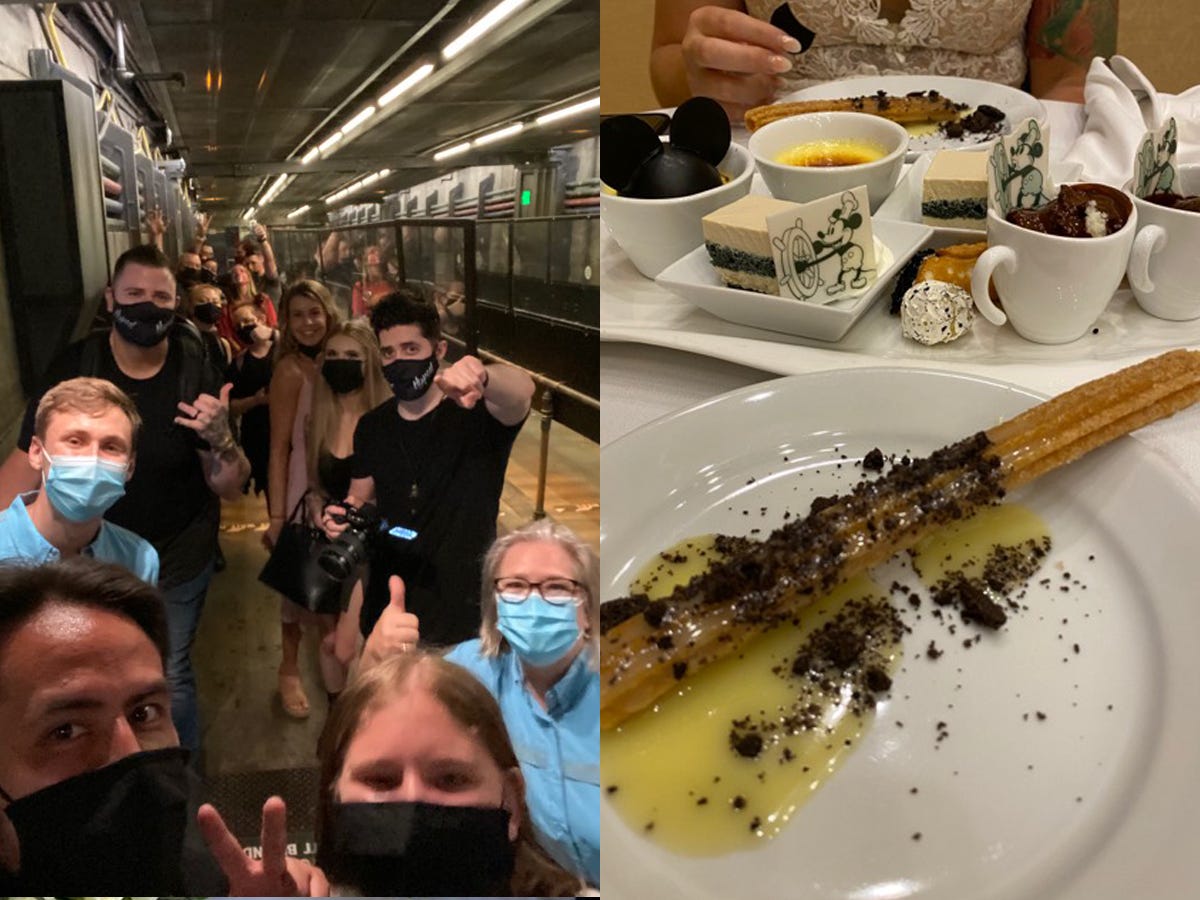 Mystee YannarellaOur guests got to go on an empty ride and attend a special dessert party.

After our wedding ceremony, we had a dessert party. Typically, these events are used for watching Disney’s fireworks and eating desserts. Because of the pandemic, Disney wasn’t doing fireworks, so we adjusted our plan.

We also took into consideration the Florida heat. We shortened our reception to only brunch, and then later in the evening, once the weather cooled down, we held a party for dancing, cake, and desserts.

This allowed our guests to go back to their hotels and rest before the party portion of our event. In between events, my bridal party even headed over to Universal Studios for a few hours.

We held our dessert party at Whitehall Patio at the Grand Floridian, which featured the famous Monorail flying right over us.

For a higher cost, we could’ve added a farewell brunch, a bridesmaid tea party (you can invite Alice and the Mad Hatter), and a dessert cruise to our wedding. 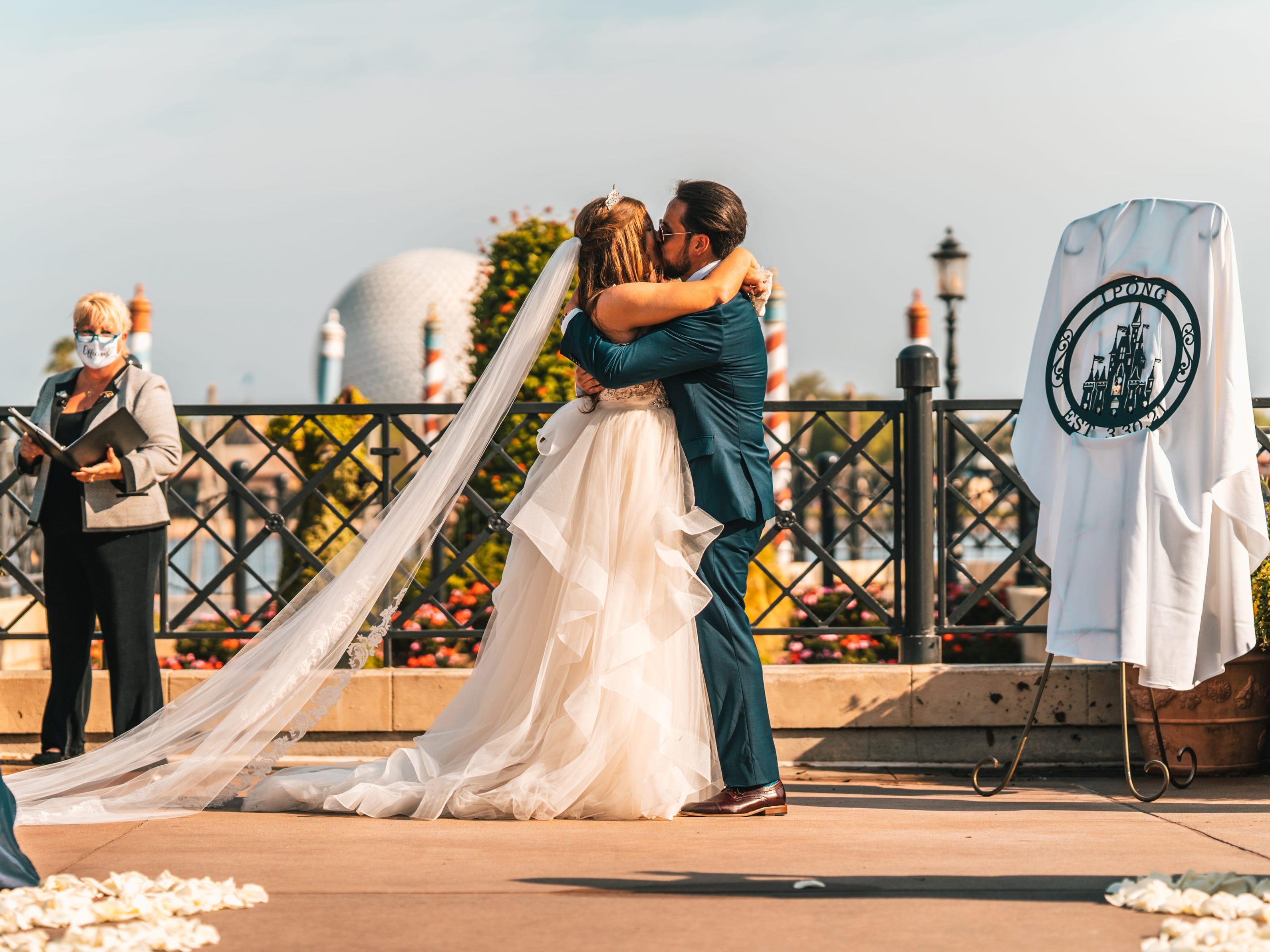 Tyler Maness/Hyped VisualsOur locations ended up being the perfect spice of Disney we were looking for while still providing our guests a view of the parks they may have never seen before.

Although I didn’t communicate with the team of coordinators much, they nailed every detail

I’m a very type A sort of planner, so it was really hard for me to just trust the Disney wedding coordinators to do their job.

Once I gave them my plans and ideas, I didn’t hear from the team for a while, which was kind of terrifying.

I felt like something was bound to go wrong – I’ve heard so many horror stories about wedding planners. But nothing did, and the few times that plans had to be adjusted, my coordinator already had a solution before contacting me, and everything was resolved in a quick email exchange.

Overall, the planning process was delightfully hands-off, which let me focus on the fun stuff, such as my menu, without stressing over the little details.

Disney planners also helped me use my budget without going over

I easily hit Disney’s wedding minimum of $10,000. Beyond that, my planner helped me use the rest of my budget in a smart way.

Since Disney was all-in-one planning, I was able to look at my overall budget and cut non-priority items, and I kept only the must-haves throughout the entire process. For example, the Ooey Gooey Toffee Cake was putting me over budget, so we removed one item of decor from the dessert party that I didn’t even notice was gone, and I was back on track.

The coordinators were also helpful when it came to making affordable swaps. When I told my florist I love white roses but wanted to be cost-effective, she designed a bouquet with white florals that captured the essence of what I wanted and stayed within my price range. 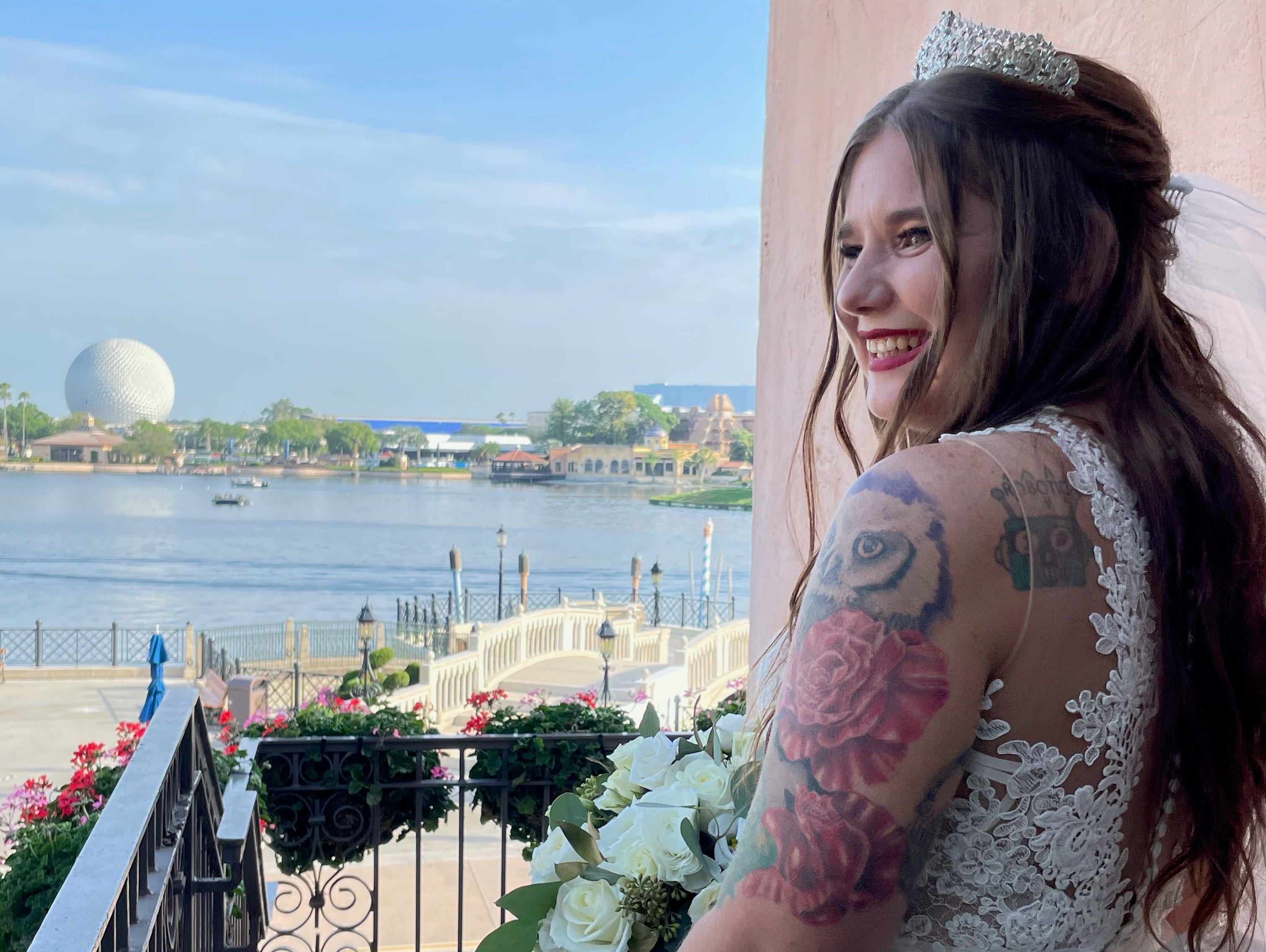 Overall, I’m shocked that I saved money by having a Disney wedding

Getting married at Disney isn’t necessarily cheap, but it is much more cost-effective than I’d imagined. My mind was definitely blown by Disney’s pricing models.

Above all, our intimate Disney wedding was much cheaper than what we were going to spend on our larger, standard wedding.

At home in Oklahoma City, venues we looked at started at $5,000 – so I definitely feel like we came out on top with our $4,500 venue fee at Epcot. Disney’s venue fee also included a violinist, chairs, an audio system with a sound technician, and a planner – which would’ve been thousands of more dollars for a traditional wedding.

Let me be clear: Getting married in front of Cinderella’s castle with a big guest list is certainly going to cost you, but Disney has a lot of venues that I felt were cost-effective.

Plus, we got the famous Epcot ball as our backdrop.