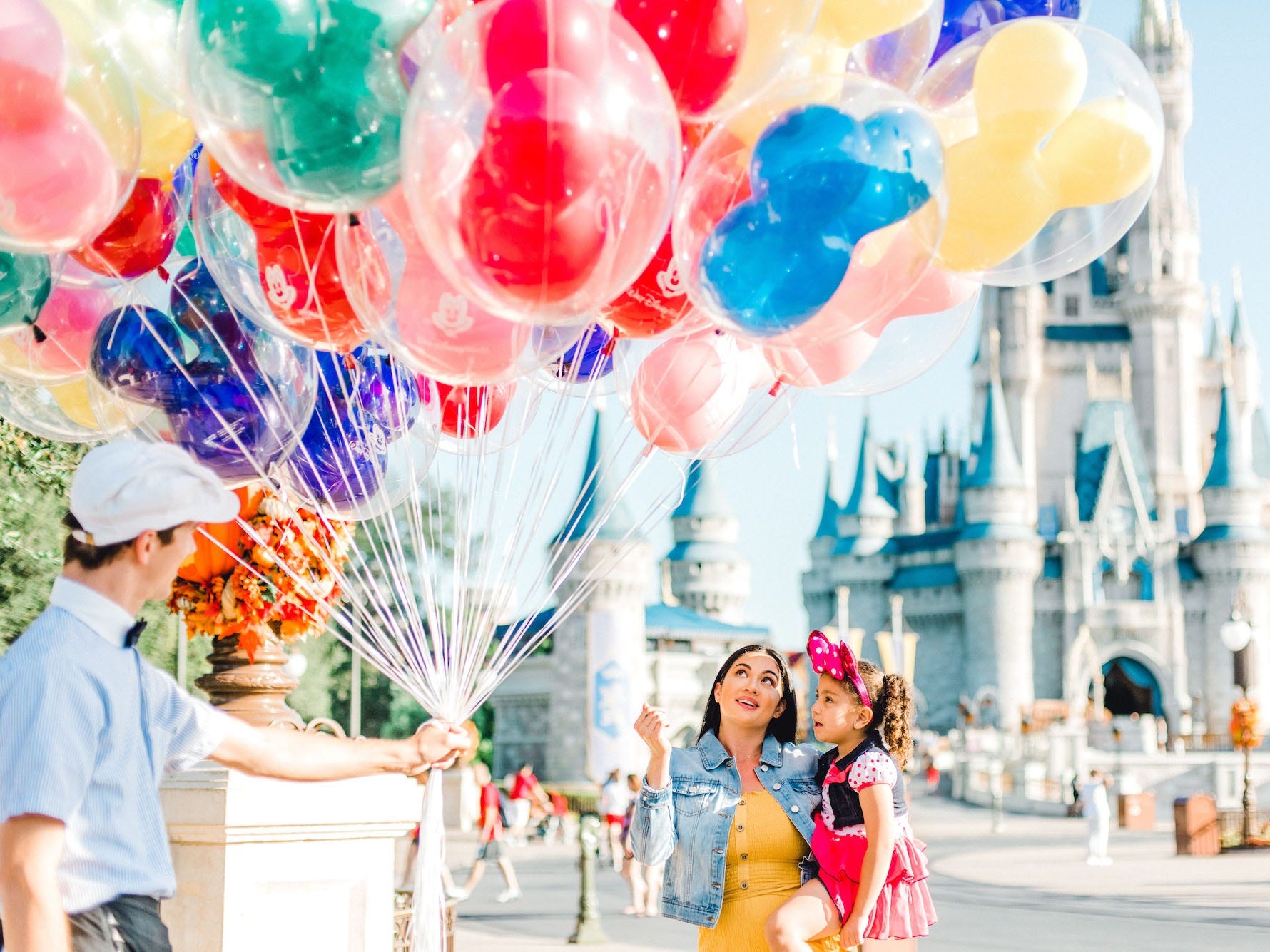 Disney ParksMagic Kingdom has changed drastically since it first opened in 1971.

Chances are that Disney theme parks look a lot different today than they did the year you were born.

Not only are the parks constantly refurbished so that they look new, but new rides and attractions are installed almost every year. And while you can’t go back in time to experience what the locations were once like, you can look at photos from those times.

Here’s what Disney theme parks around the world have looked like over the years.

1955: During its opening year, Disneyland was filled with knights on horses and classic characters. 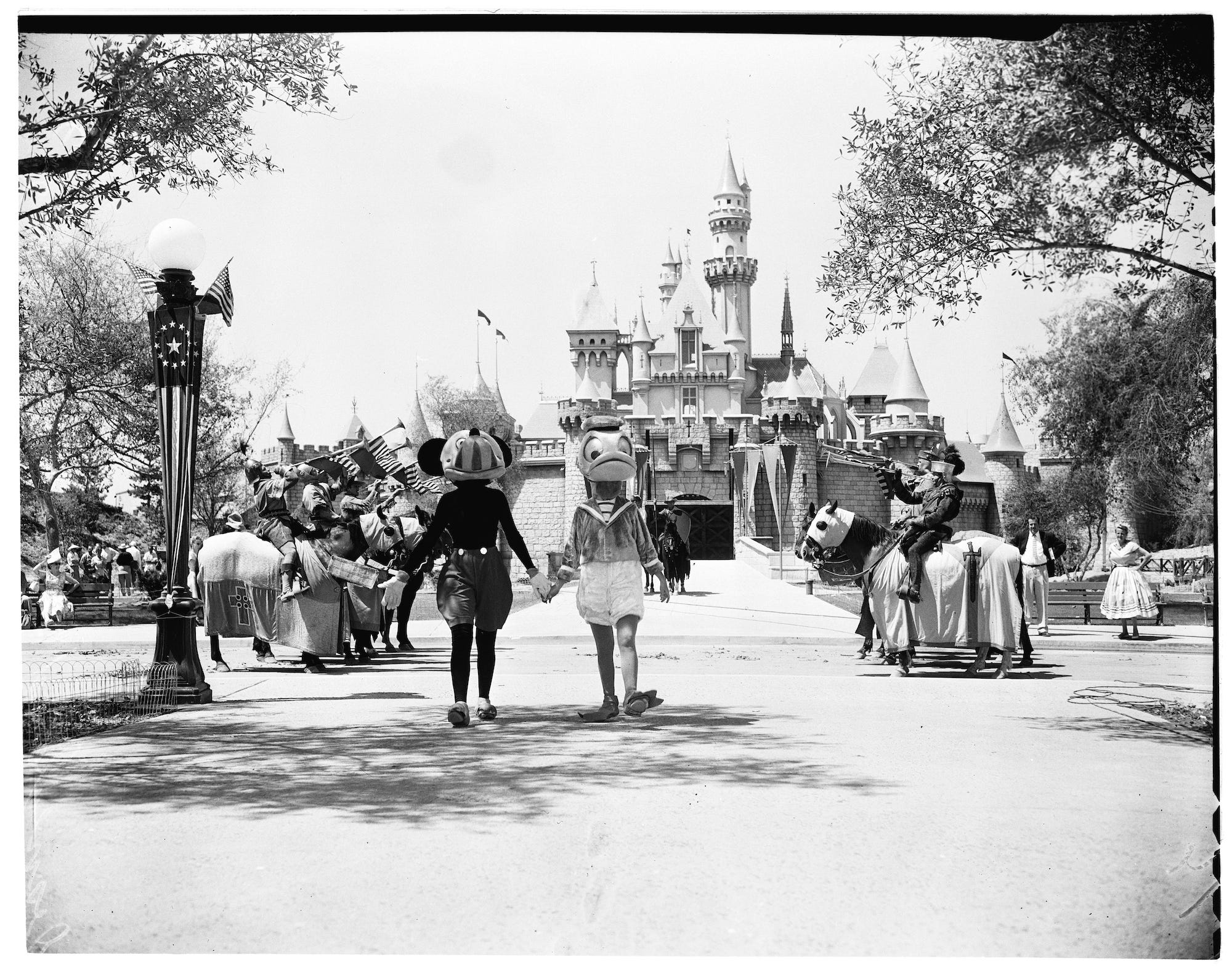 Characters at the theme park in Anaheim, California, looked a lot different in 1955 than they do today. Employees dressed as Mickey Mouse and Donald Duck, for example, simply wore giant masks and form-fitting clothes rather than head-to-toe oversized costumes. 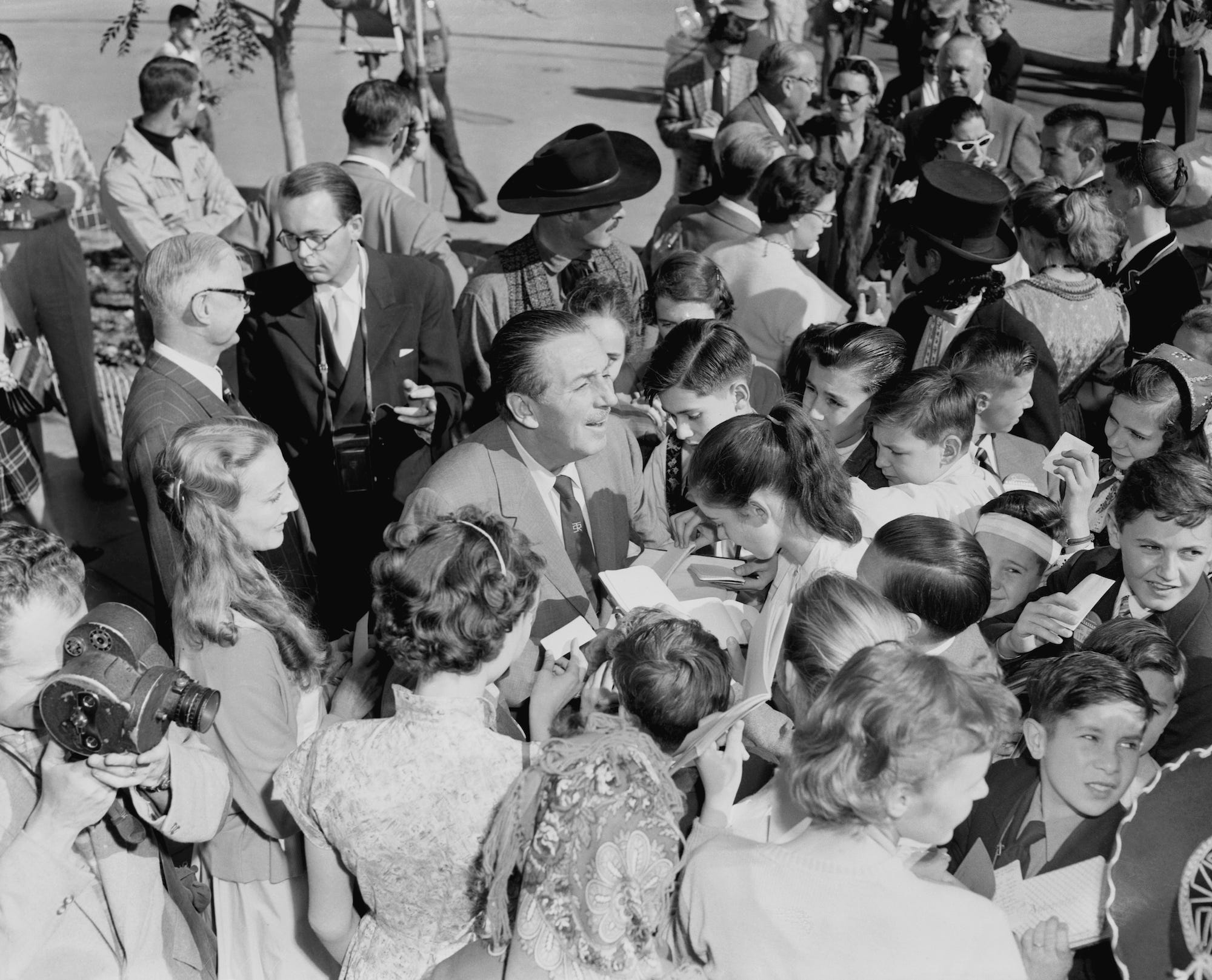 Bettmann/Getty ImagesChildren from around the world crowd Walt Disney for autographs on November 15, 1956.

He was often photographed on Disneyland rides, working on new attractions, and interacting with young fans.

In the photo above, for example, international students from the Burbank school system gathered around the theme-park founder to get his autograph.

1960 – 1966: It was common to see Disneyland employees, or cast members, scaling the Matterhorn Bobsleds. 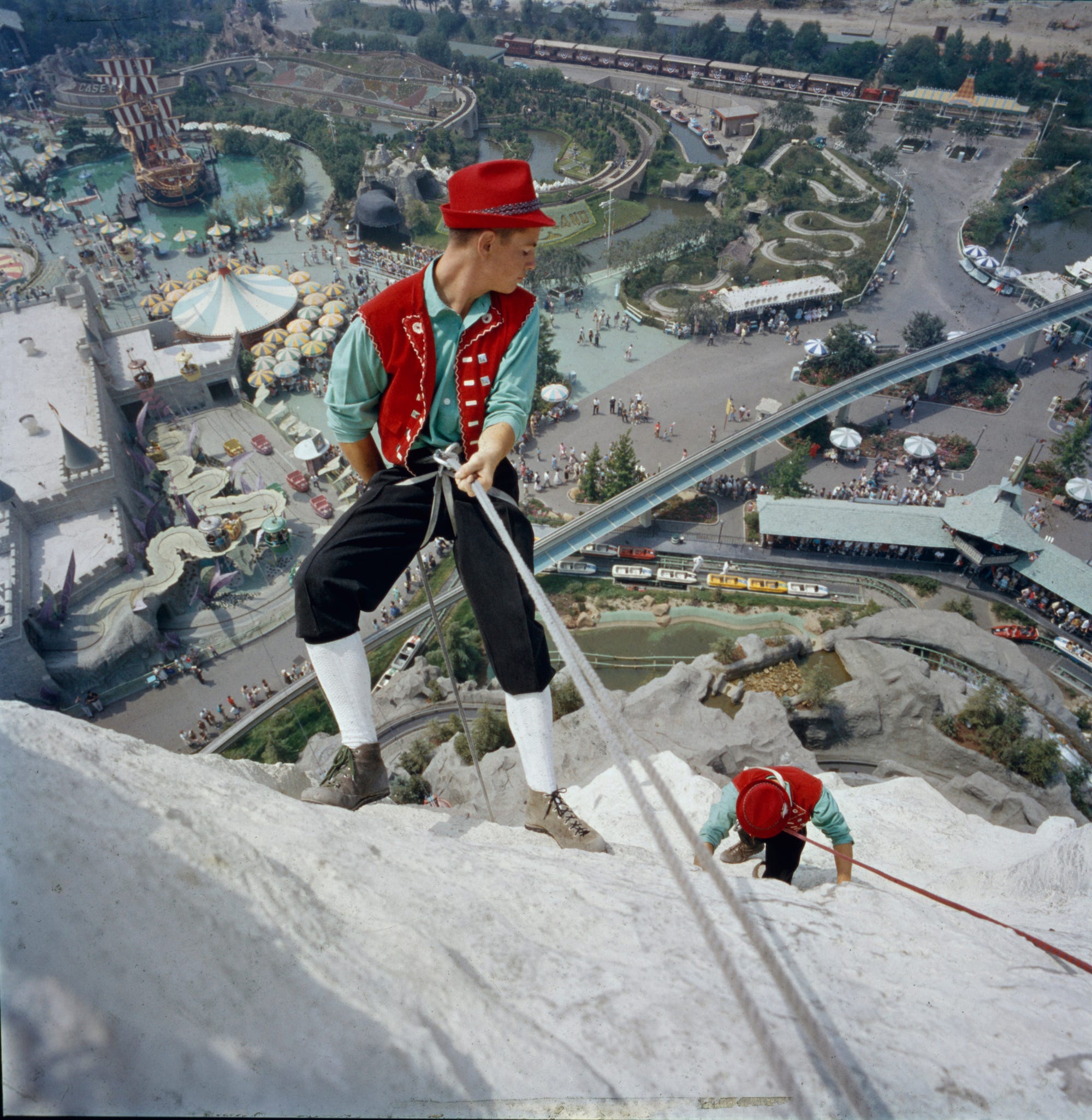 Thankfully for fans of the climbers, employees still occasionally scale the iconic ride. For example, they did so for a limited time in 2012, according to the Disney Parks Blog. 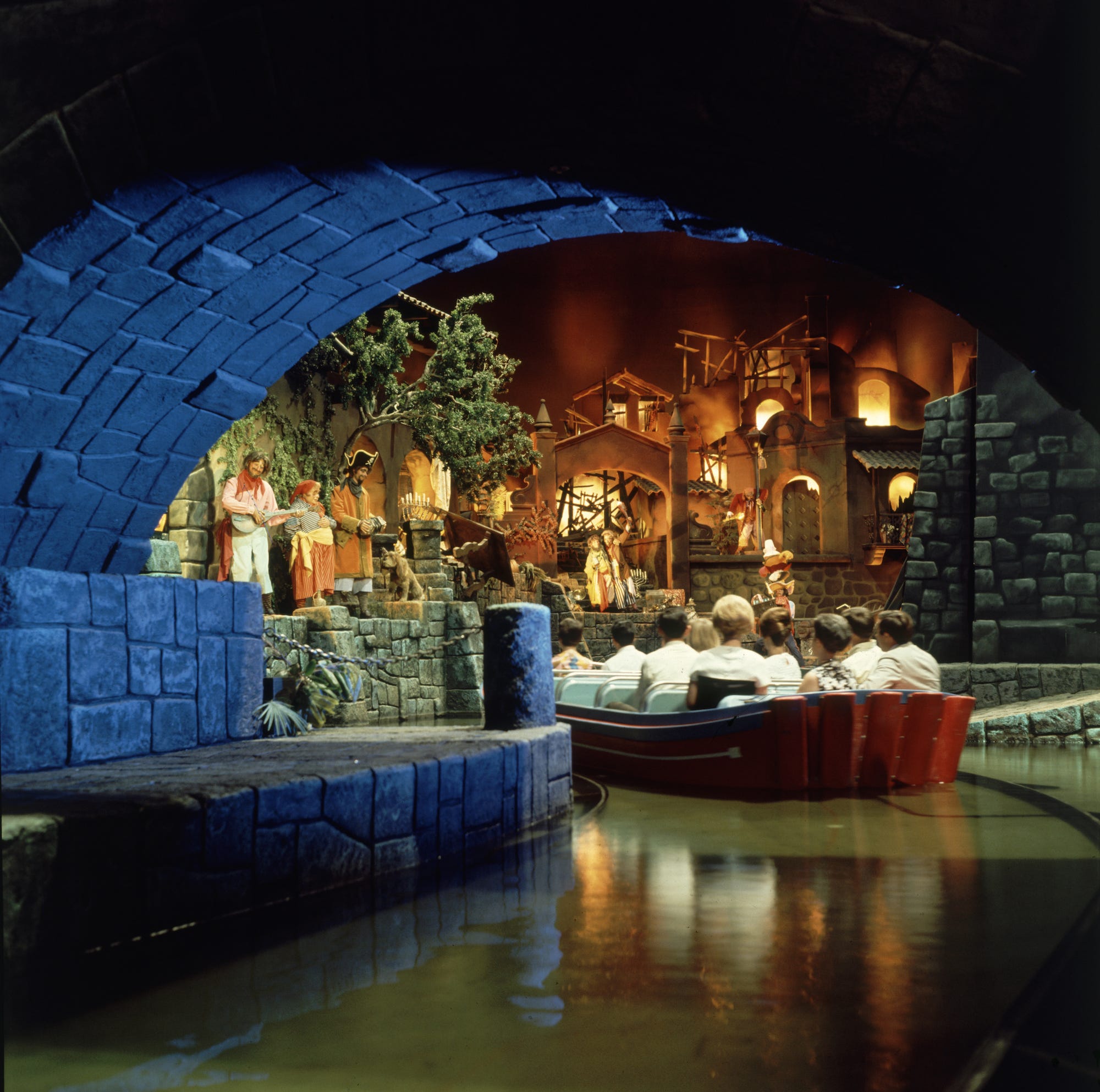 According to the official Disneyland website, Walt Disney created Pirates of the Caribbean in the ’50s as a walk-through wax museum. Years later, however, he redesigned it as an animatronic-filled ride, and opened the attraction in Anaheim on March 18, 1967.

1970: At the start of the decade, Disneyland visitors could purchase fruit and flowers within the park. 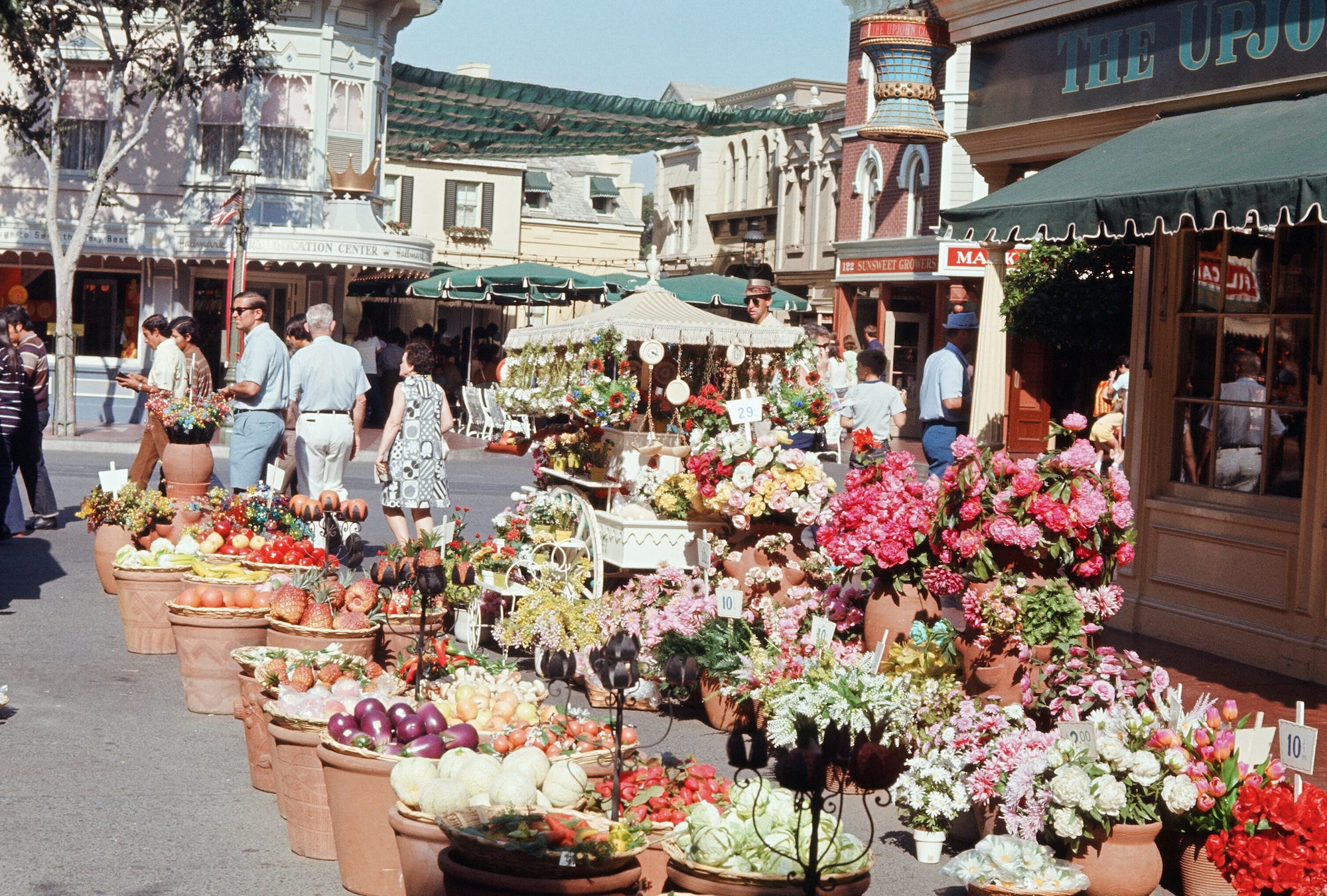 According to Yesterland, a blog about retired Disney attractions, all plants sold at the Main Street Flower Mart were made of plastic. At the time, it was located in-between an ice-cream shop and a pharmacy. 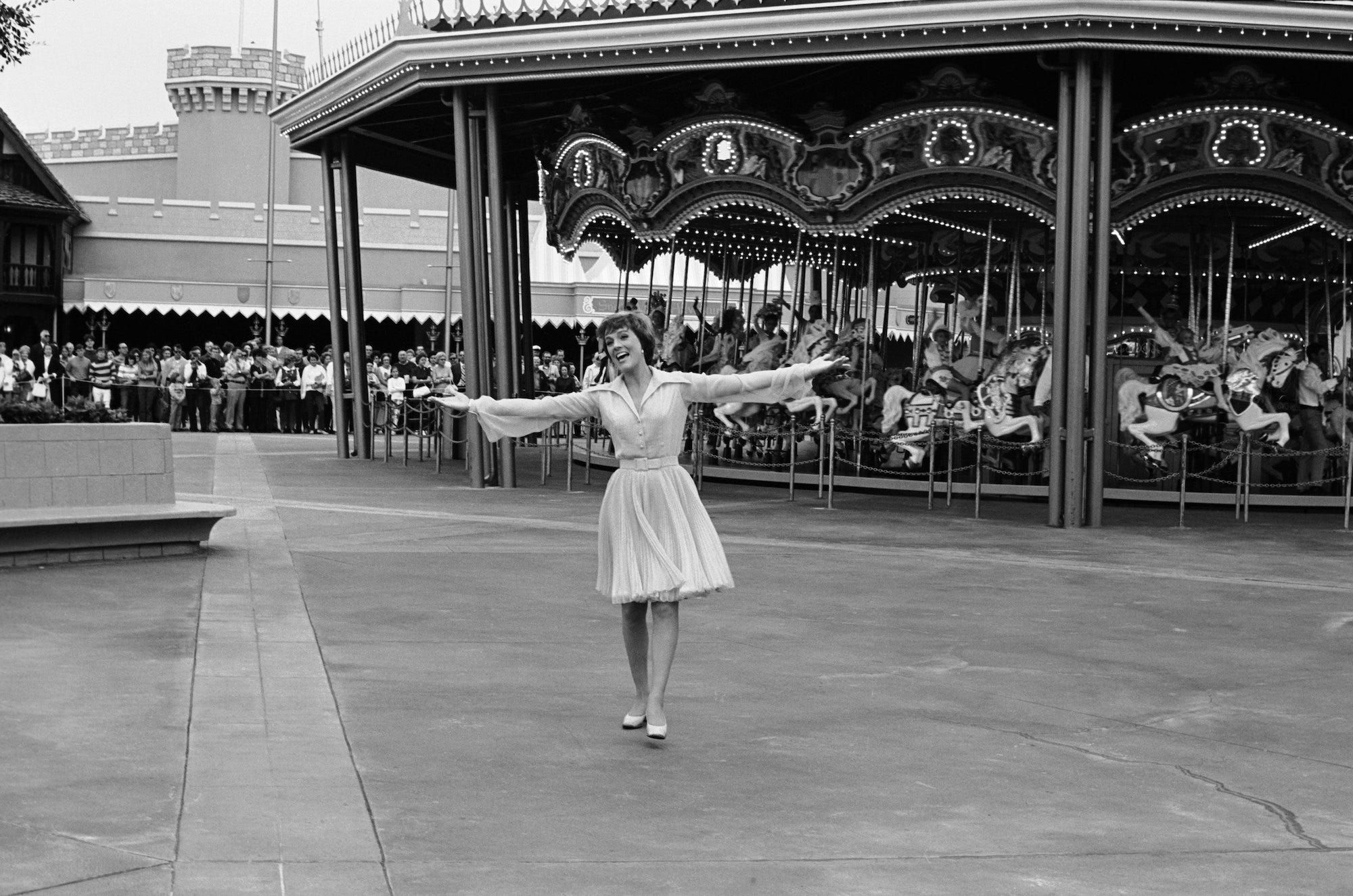 On October 1, 1971, Disney World opened with fanfare – there were musical performances, ride previews, giant marching bands, and a balloon release. Today, the ceremony is free to watch on YouTube. 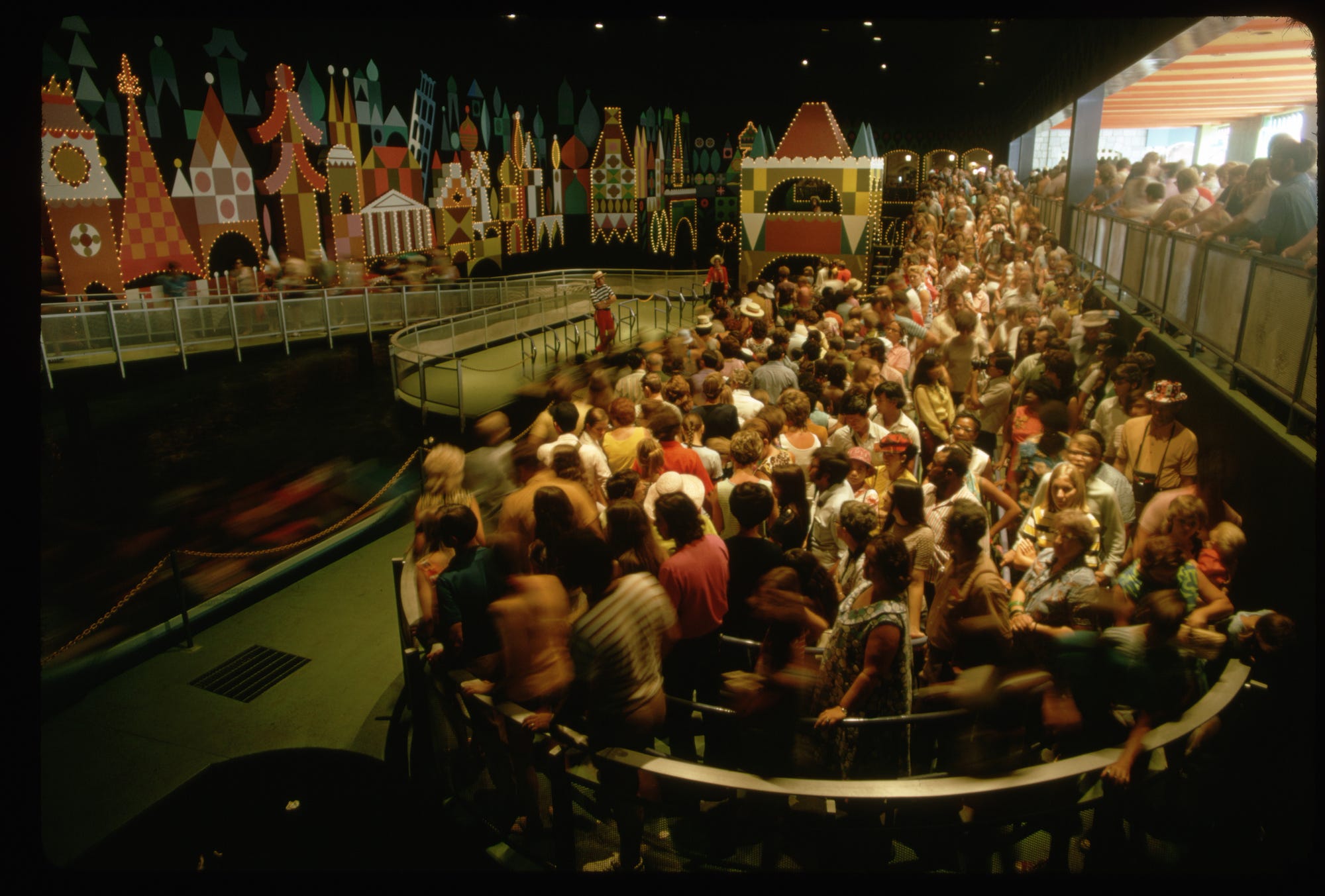 Disney Imagineers originally created It’s a Small World for the 1964-1965 World’s Fair, though it was later transferred to Disney World before opening day, according to Best of Orlando.

1980 – 1984: Posing with balloons in front of Cinderella Castle was becoming a common practice. 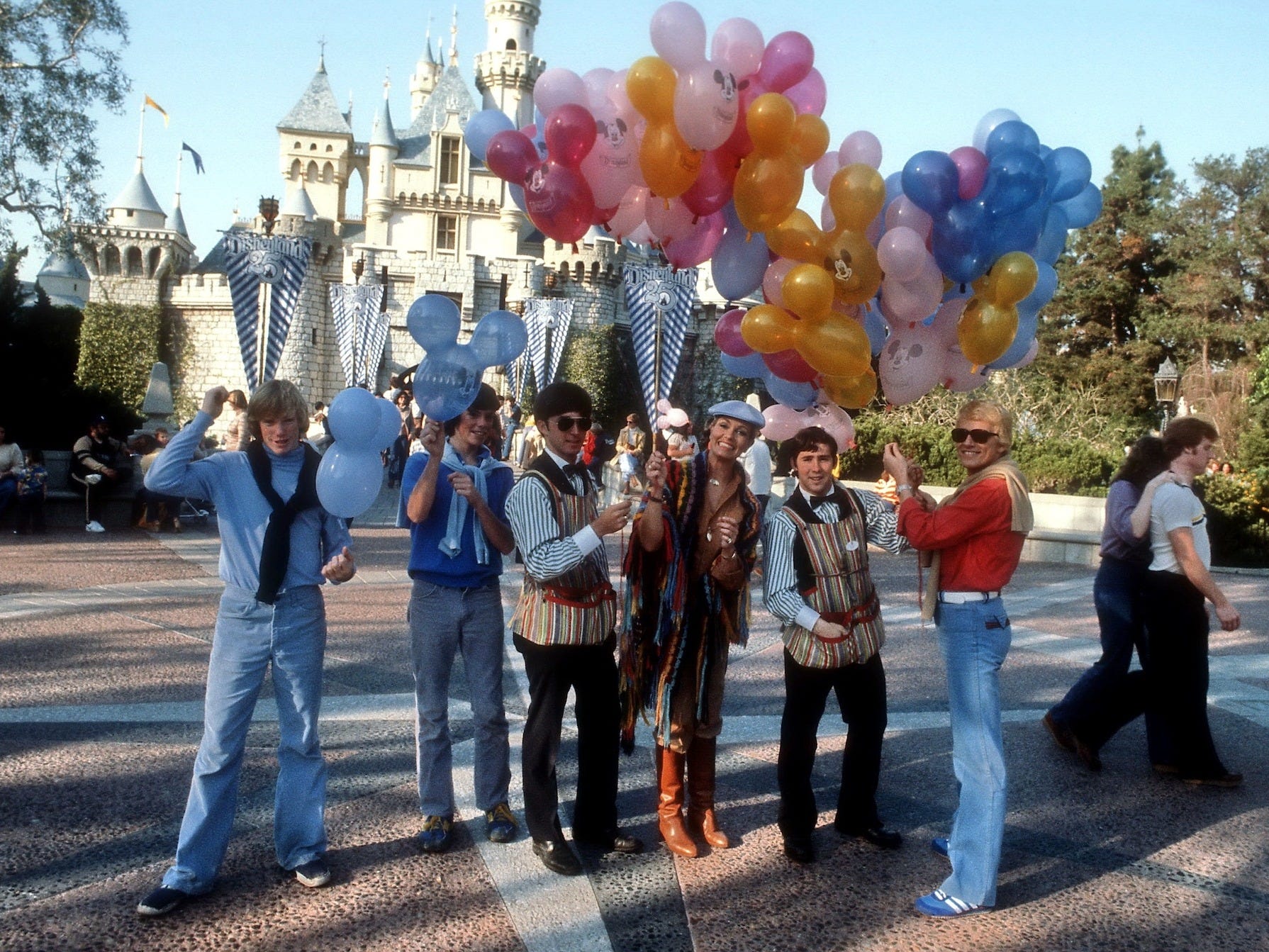 At the time, many of the colourful balloons were shaped like Mickey Mouse. Similar designs are still seen in the parks today, though they’re often sold inside clear round balloons. 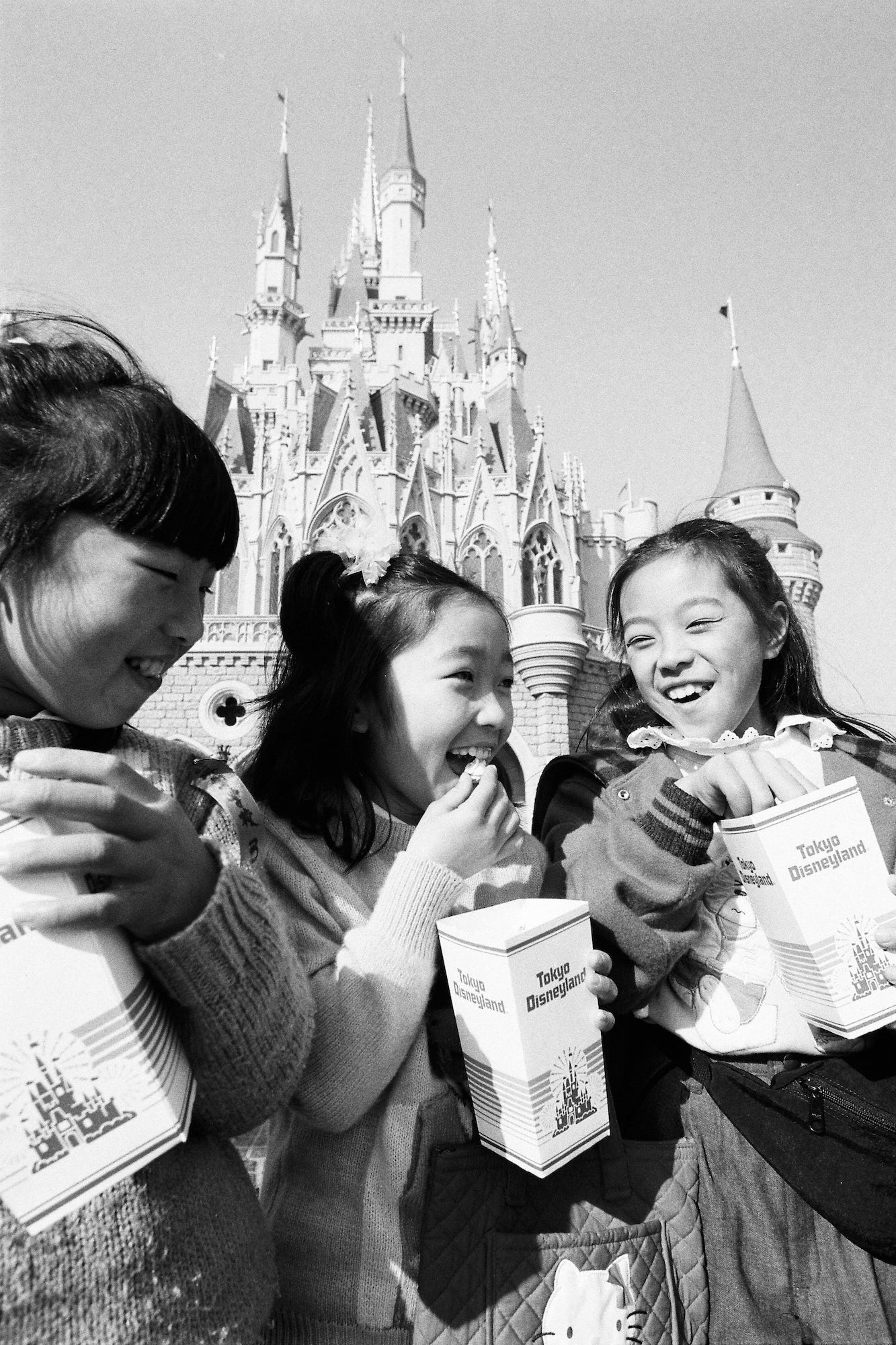 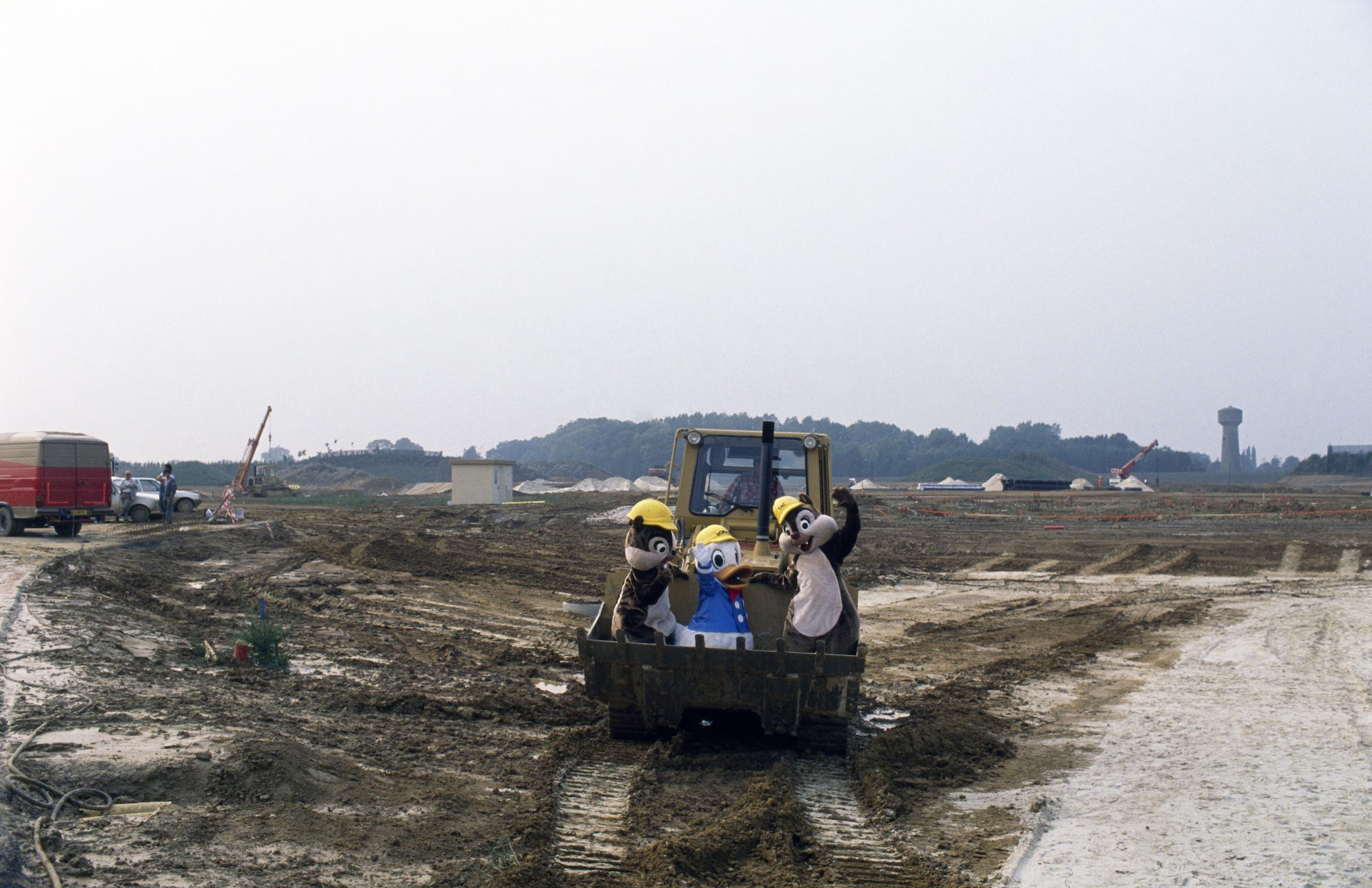 Characters like Chip, Dale, and Donald Duck were photographed riding in a construction vehicle on the site of Disneyland Paris in the late ’80s. 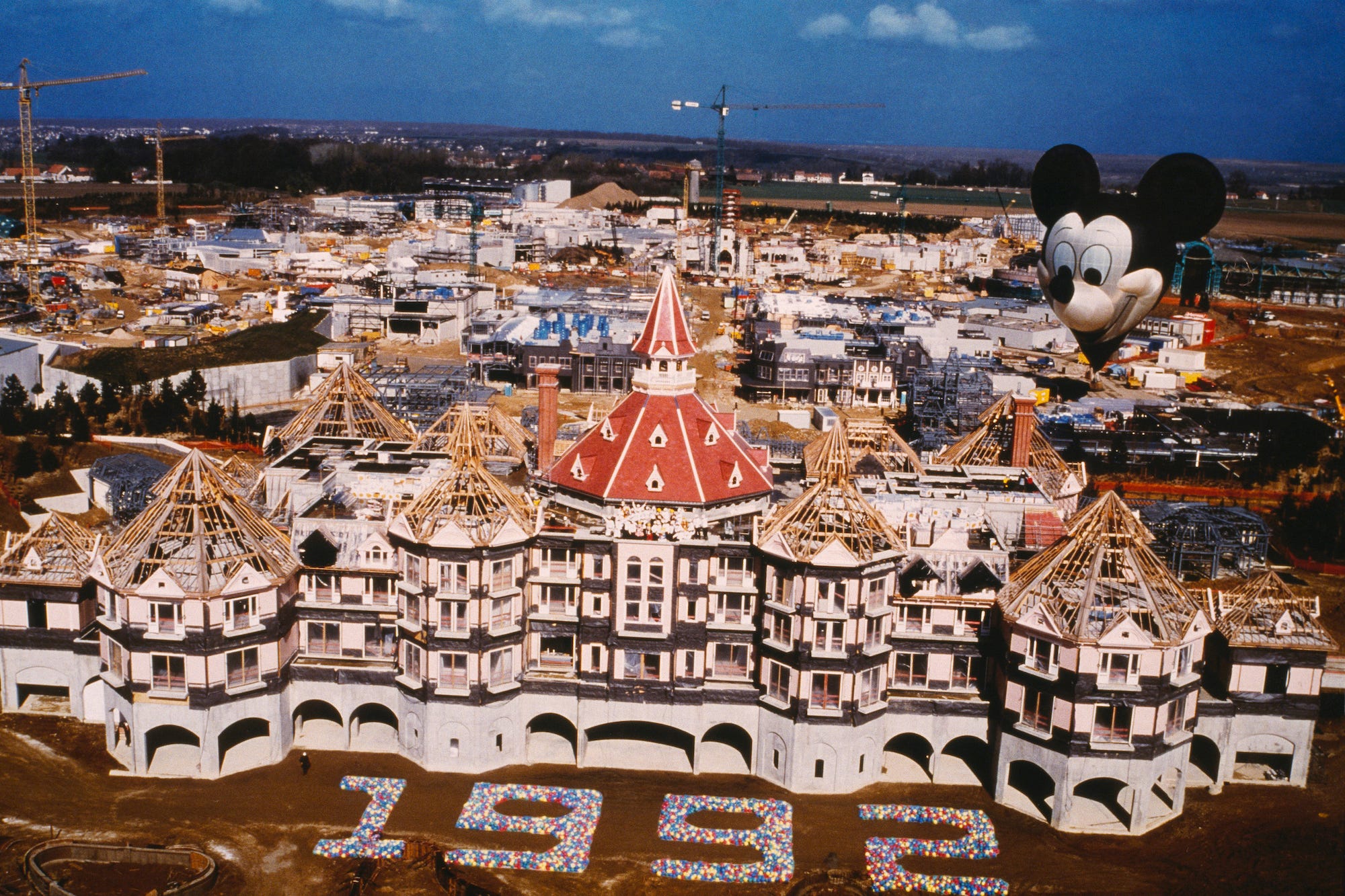 For example, buildings had been constructed, a Mickey-shaped hot-air balloon graced the sky, and the opening year 1992 was written in giant numbers across the ground. 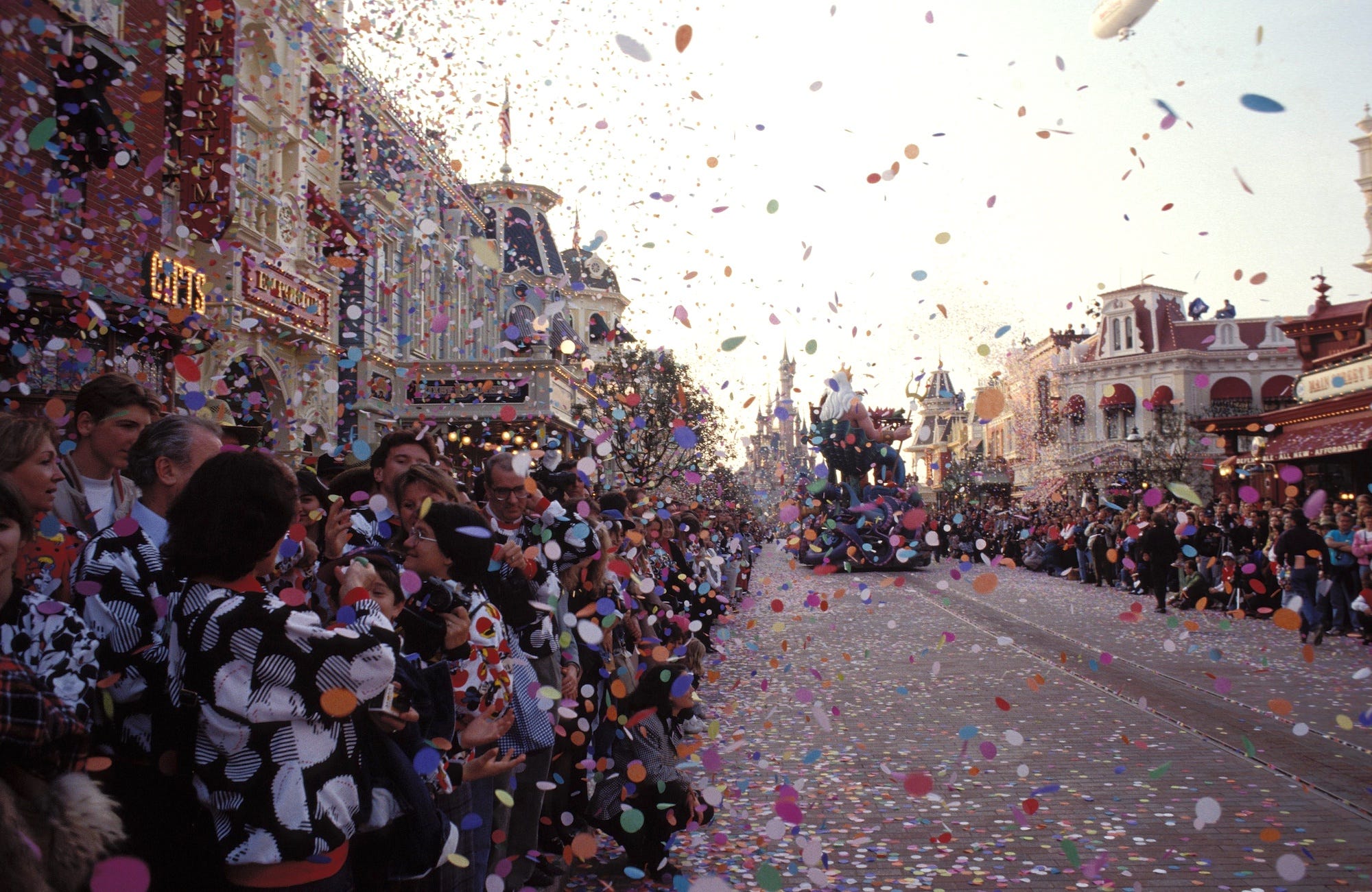 After the park opened for business on April 12, 1992, parkgoers filled Main Street U.S.A. for a confetti-filled parade. 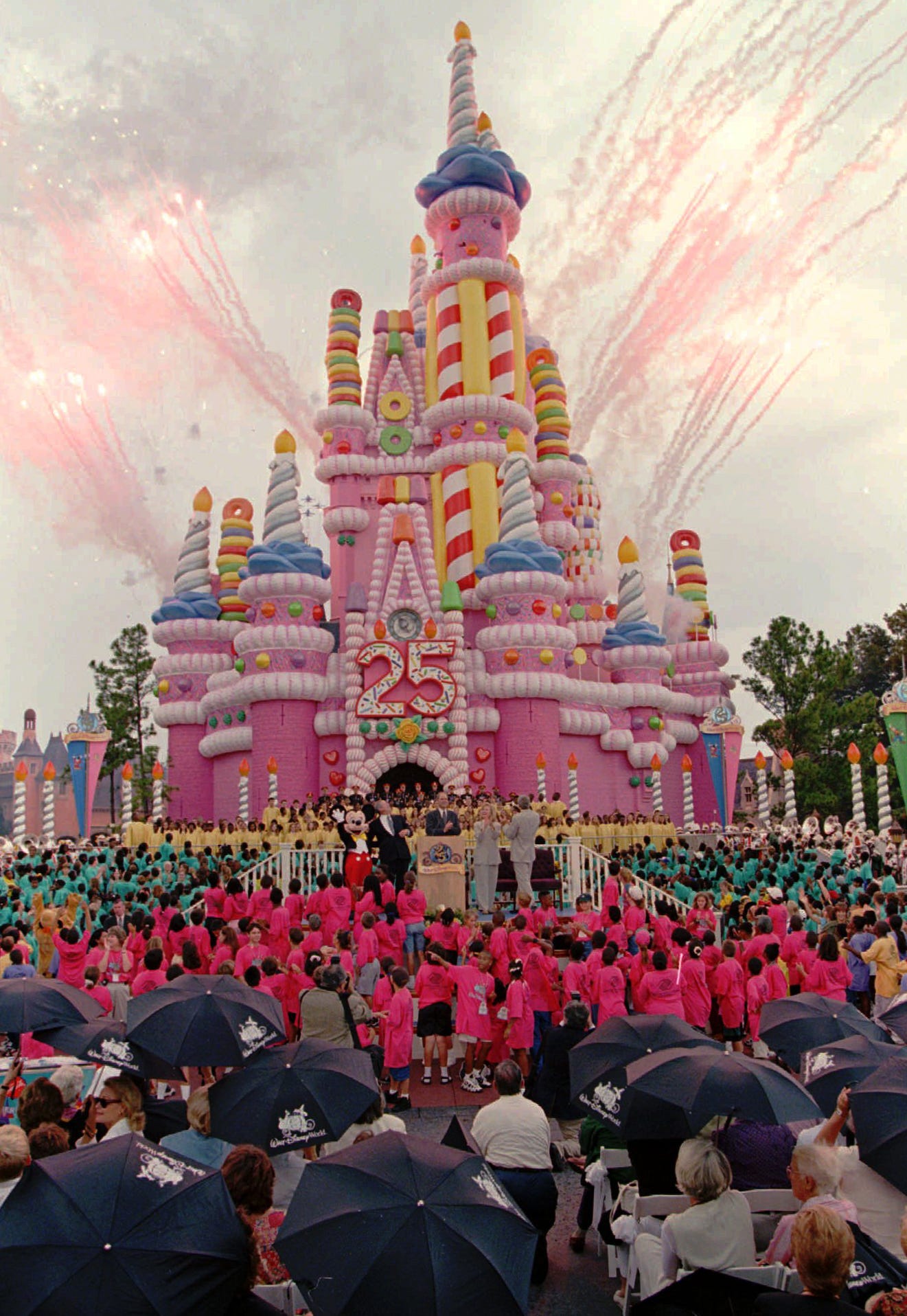 The birthday-cake overlay was placed over the Disney landmark in celebration of Magic Kingdom’s 25th anniversary. Though it was only meant to last one year, the decorations remained in place until January 31, 1998.

While some people loved the transformation, others weren’t as impressed. After all, people travel from across the world to have their photo taken in front of Cinderella’s home – not a larger-than-life cake. 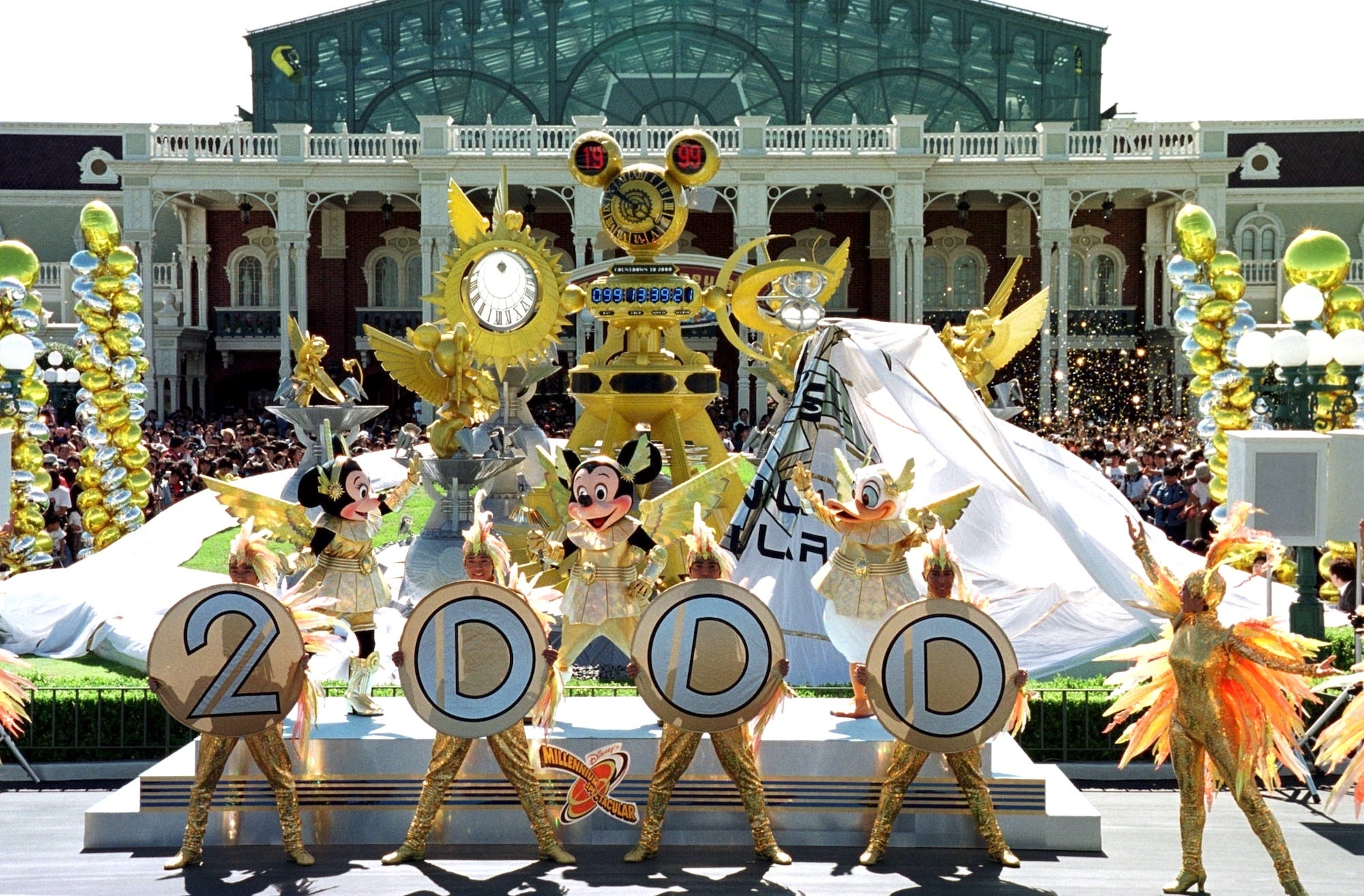 In September 1999, Disney employees and characters celebrated with bold costumes and dance numbers in front of a special countdown clock. 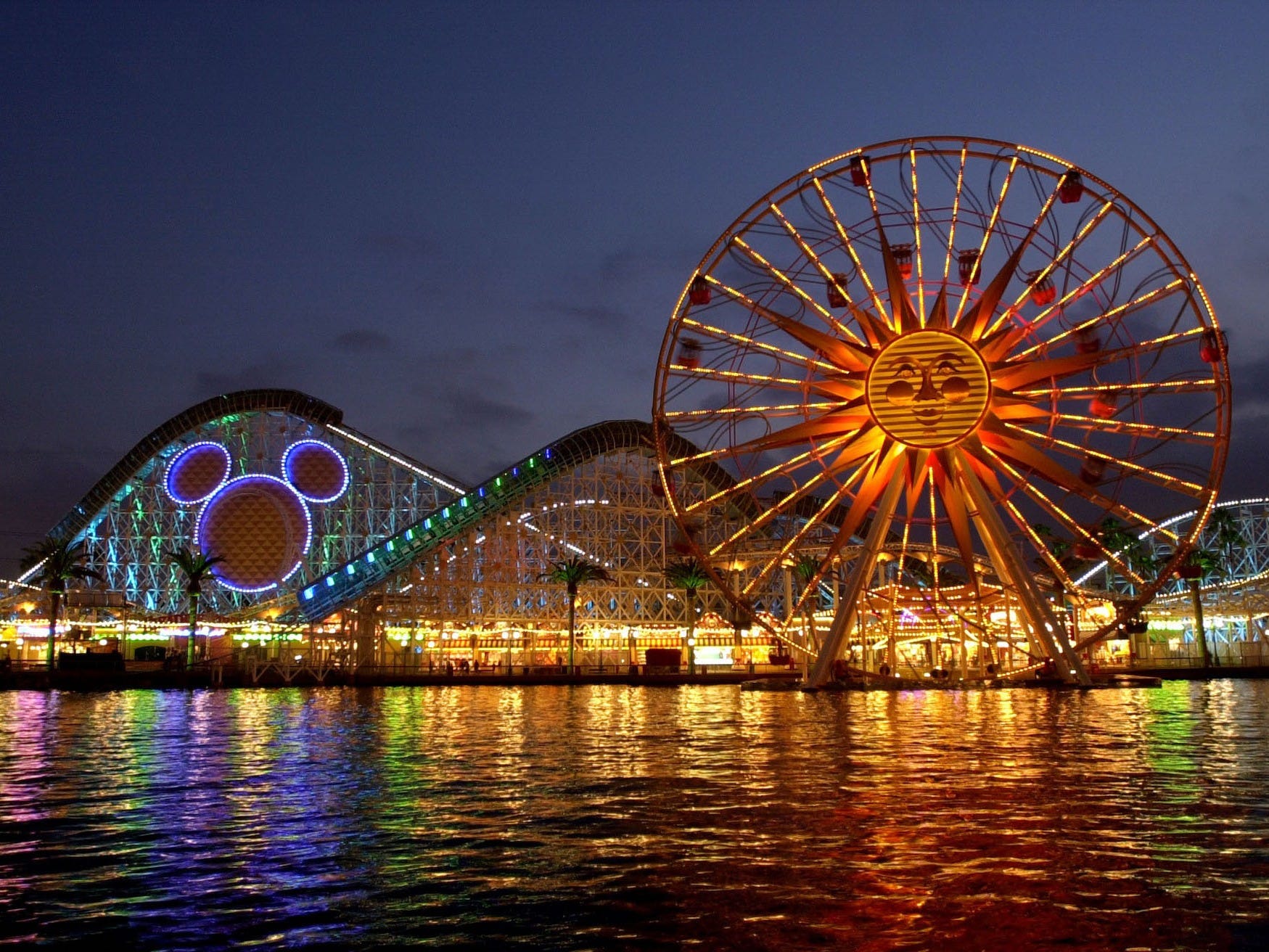 The theme park opened for business on February 8, 2001, and was home to rides including California Screamin’ and the Sun Wheel. Today, however, the land looks a bit different with the addition of Pixar Pier. 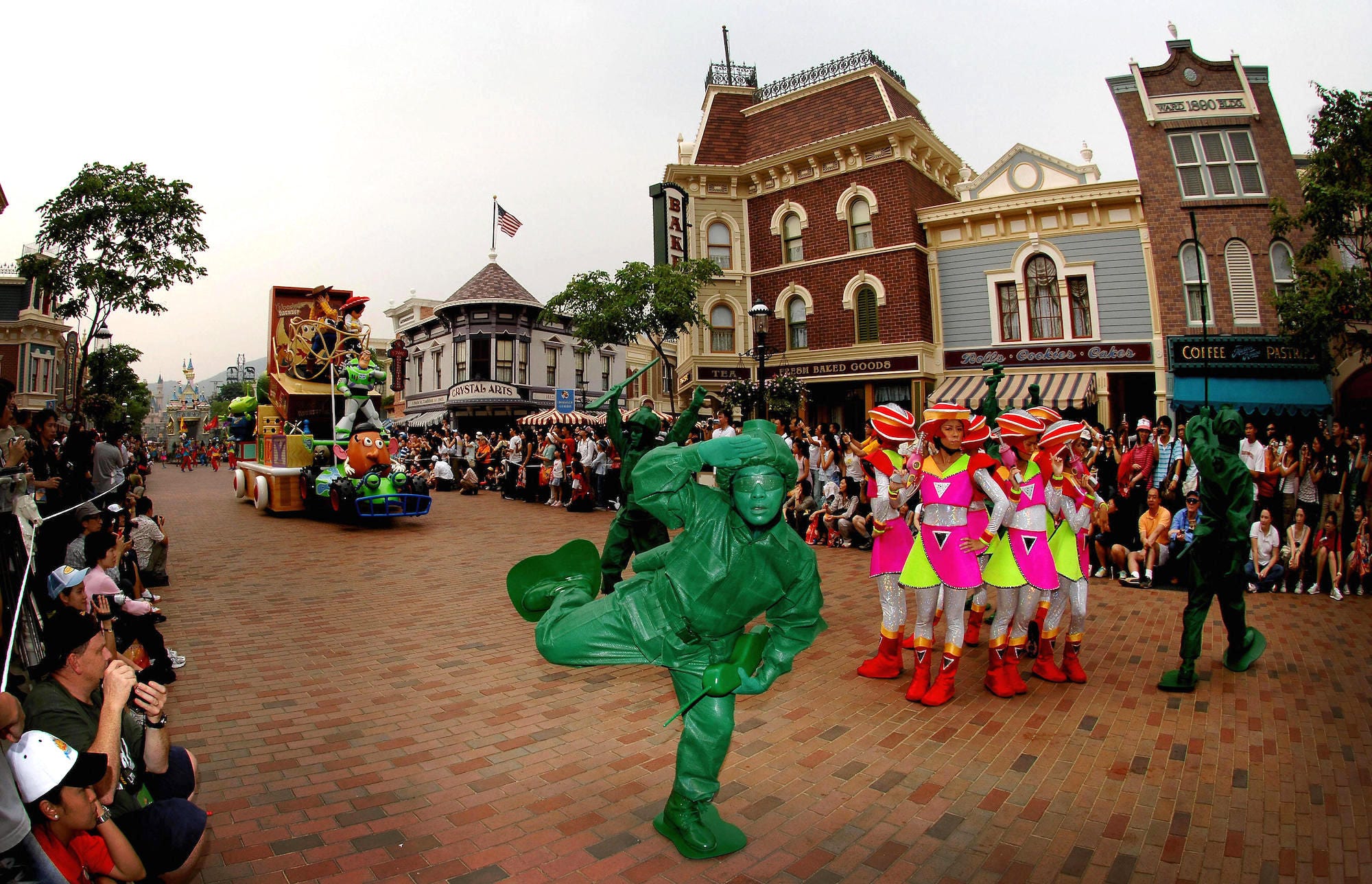 Whereas most Disney theme parks are comprised of multiple smaller parks, Hong Kong Disneyland Resort stands alone. At the time, the location was home to a replica of Sleeping Beauty’s castle, which looked similar to the one found in California’s Disneyland Park.

Now, however, Hong Kong Disneyland Resort is renovating the attraction, and the castle will soon look completely different. 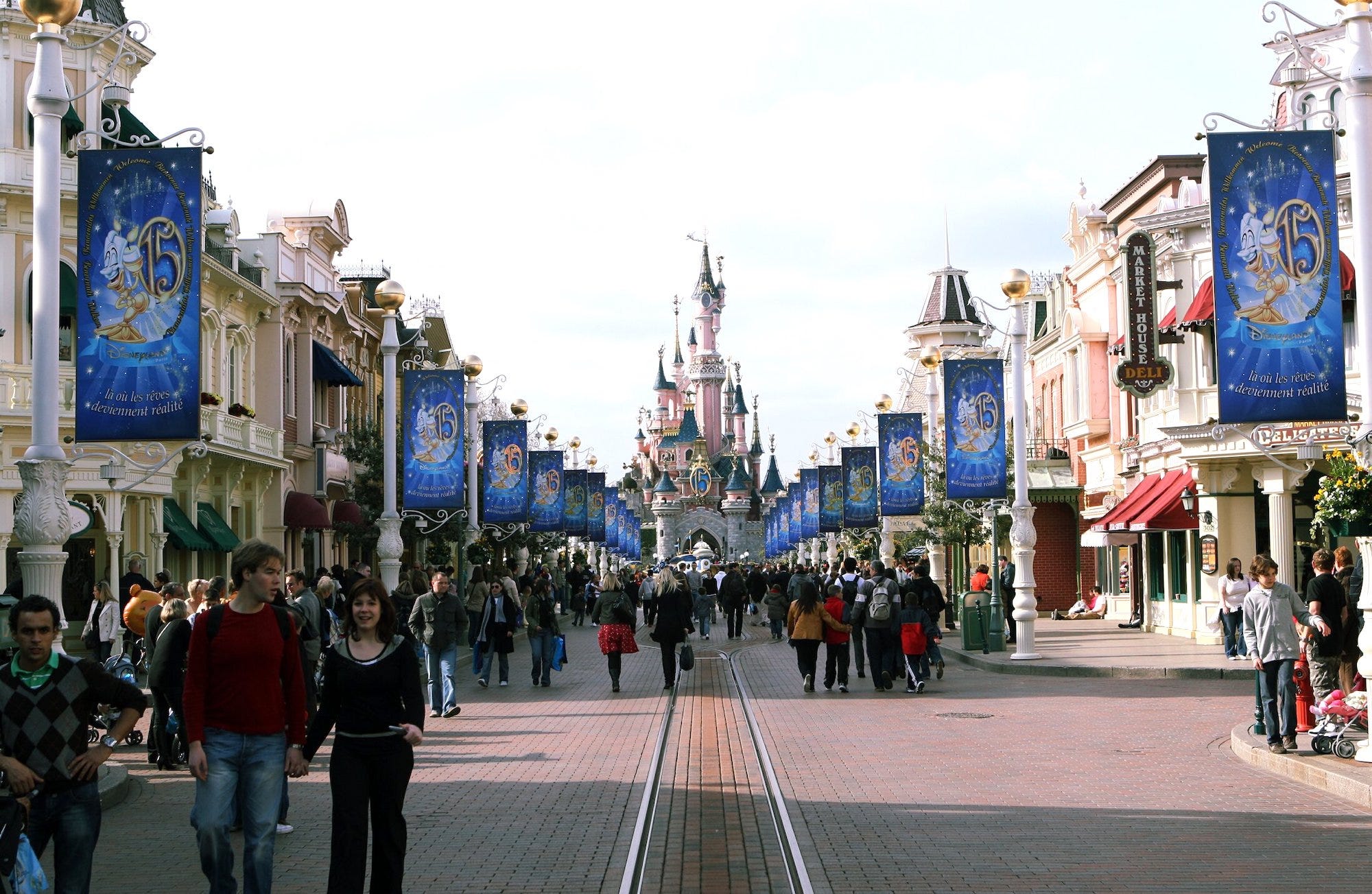 Celebrations lasted throughout all of 2008 and into 2009. Not only was Main Street U.S.A. decorated in blue banners, but the castle was also covered in special plaques and decorations. 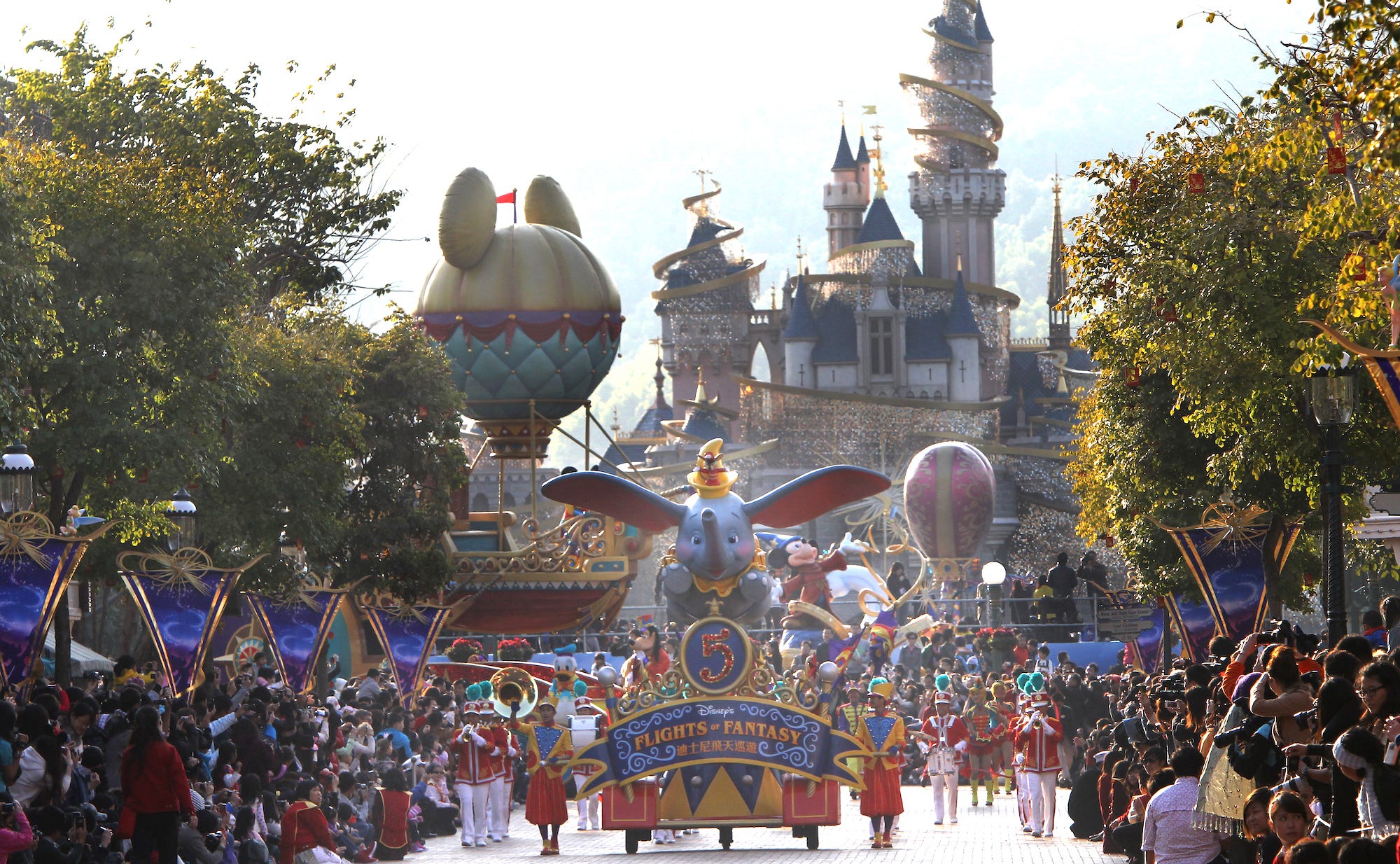 From the Disney On Parade spectacle that ended around 2010, to the Flights of Fantasy Parade that replaced it in 2011, there was always something exciting happening at the Hong Kong theme park. 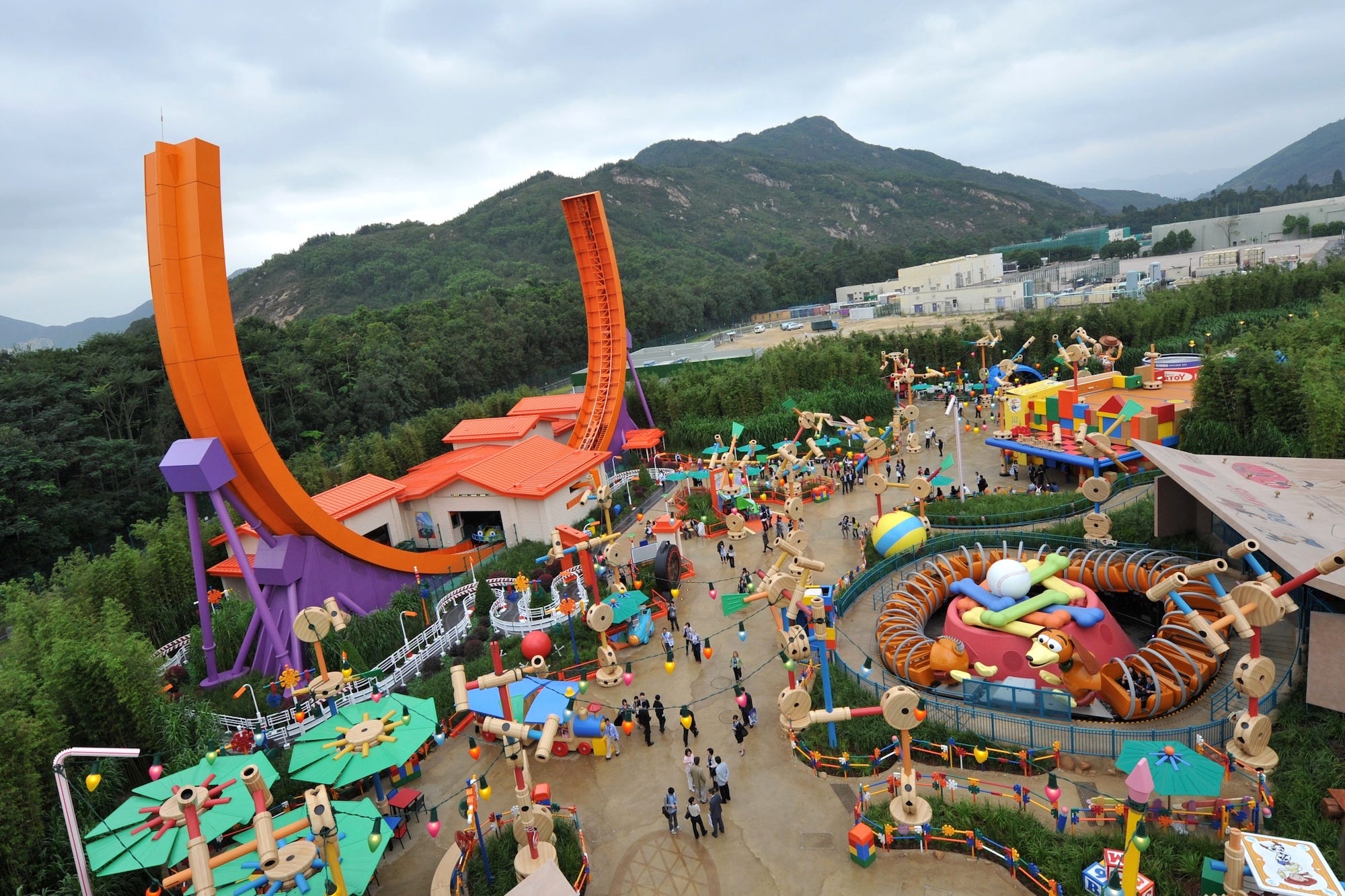 Opening at the end of 2011, Toy Story Land became especially popular within the theme park throughout 2012 and 2013. Today, rides like RC Racer and Slinky Dog Spin are still fan-favourites.

2014 – 2015: The Seven Dwarfs Mine Train became one of the most popular rides at Disney World’s Magic Kingdom. 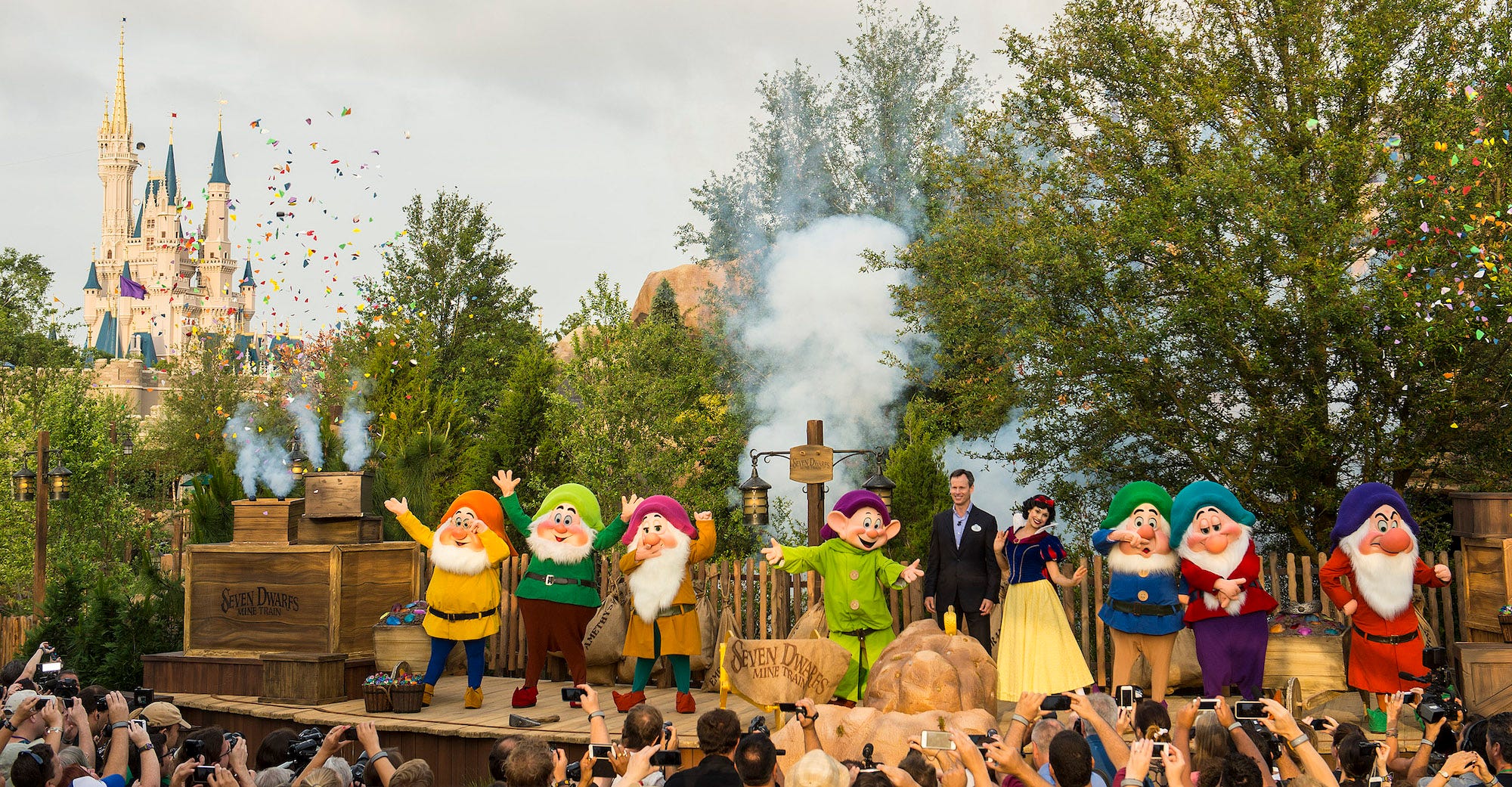 Handout/Getty Images‘Snow White’ characters celebrate the new ride at Disney World in May 2014.

The attraction first opened on May 28, 2014,with the help of Snow White and the Seven Dwarfs.Crowds still gather years later for a chance to ride, with wait times sometimes exceeding two hours. 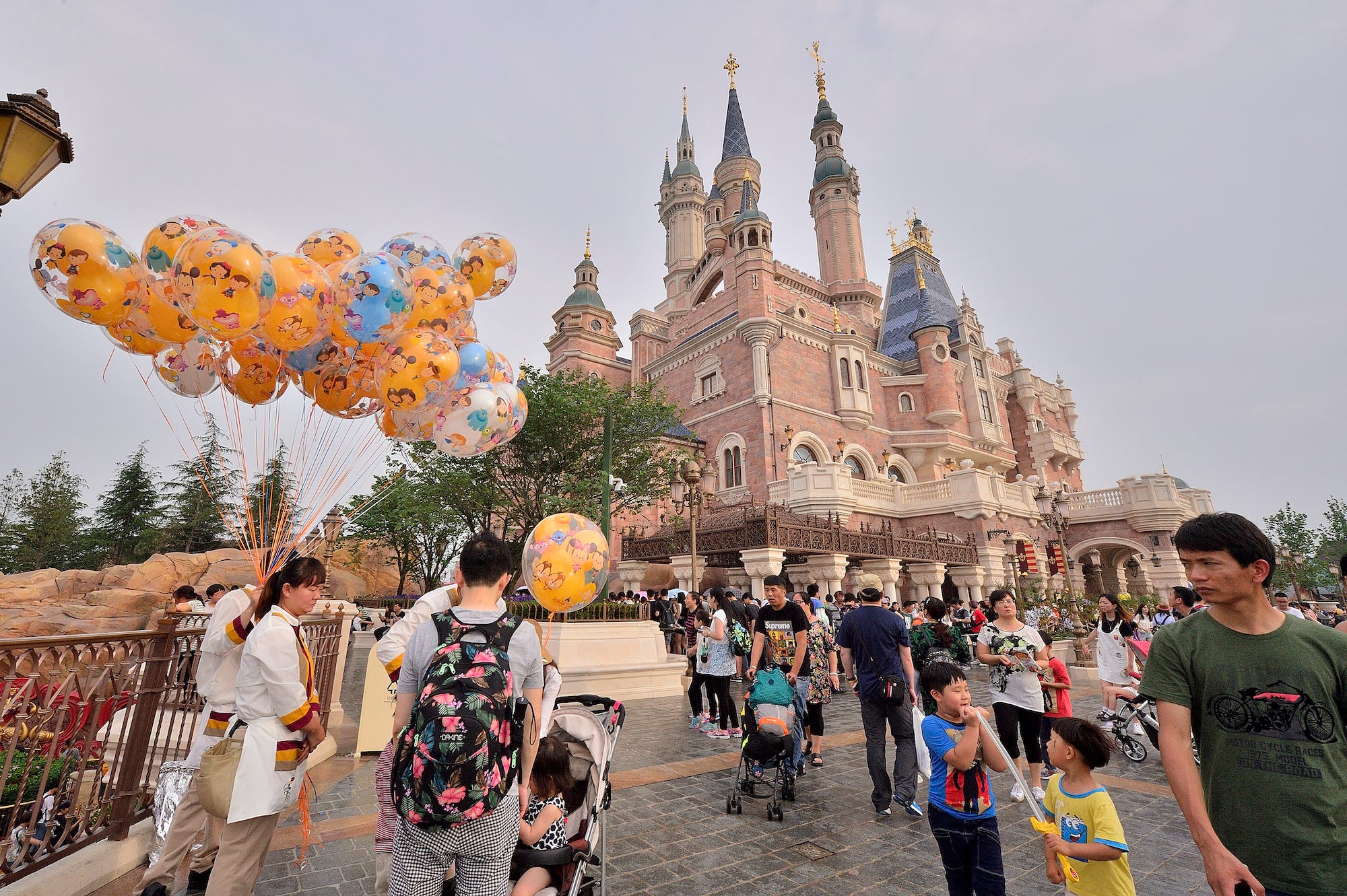 Though the Chinese theme park opened for the first time on June 16, 2016, some people – like those seen in the photo above – were lucky enough to get early access to the park a few days before.

2019: Galaxy’s Edge changed the game at Disney World and Disneyland. 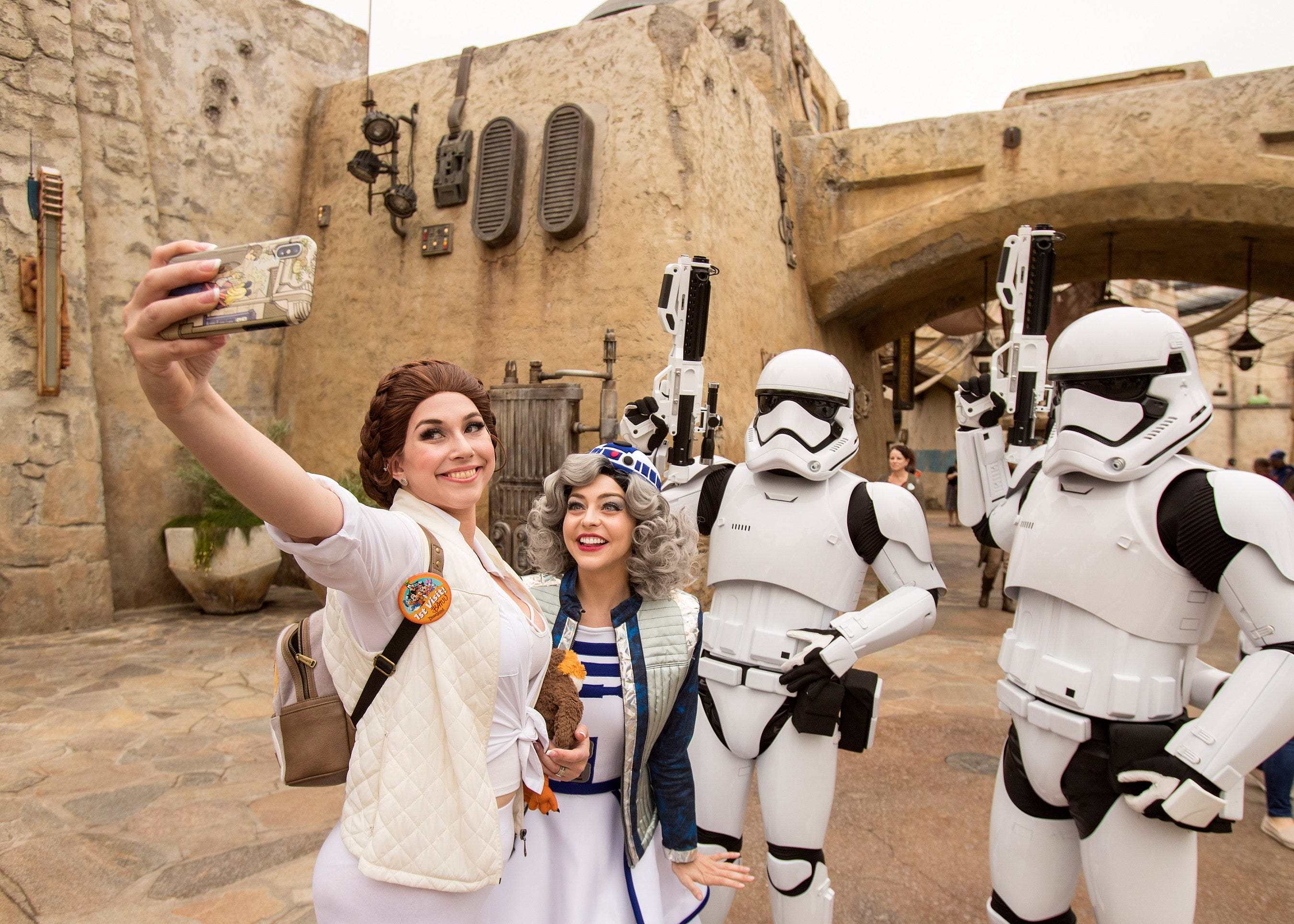 2020: Disney theme parks temporarily closed for months as a result of the coronavirus pandemic. 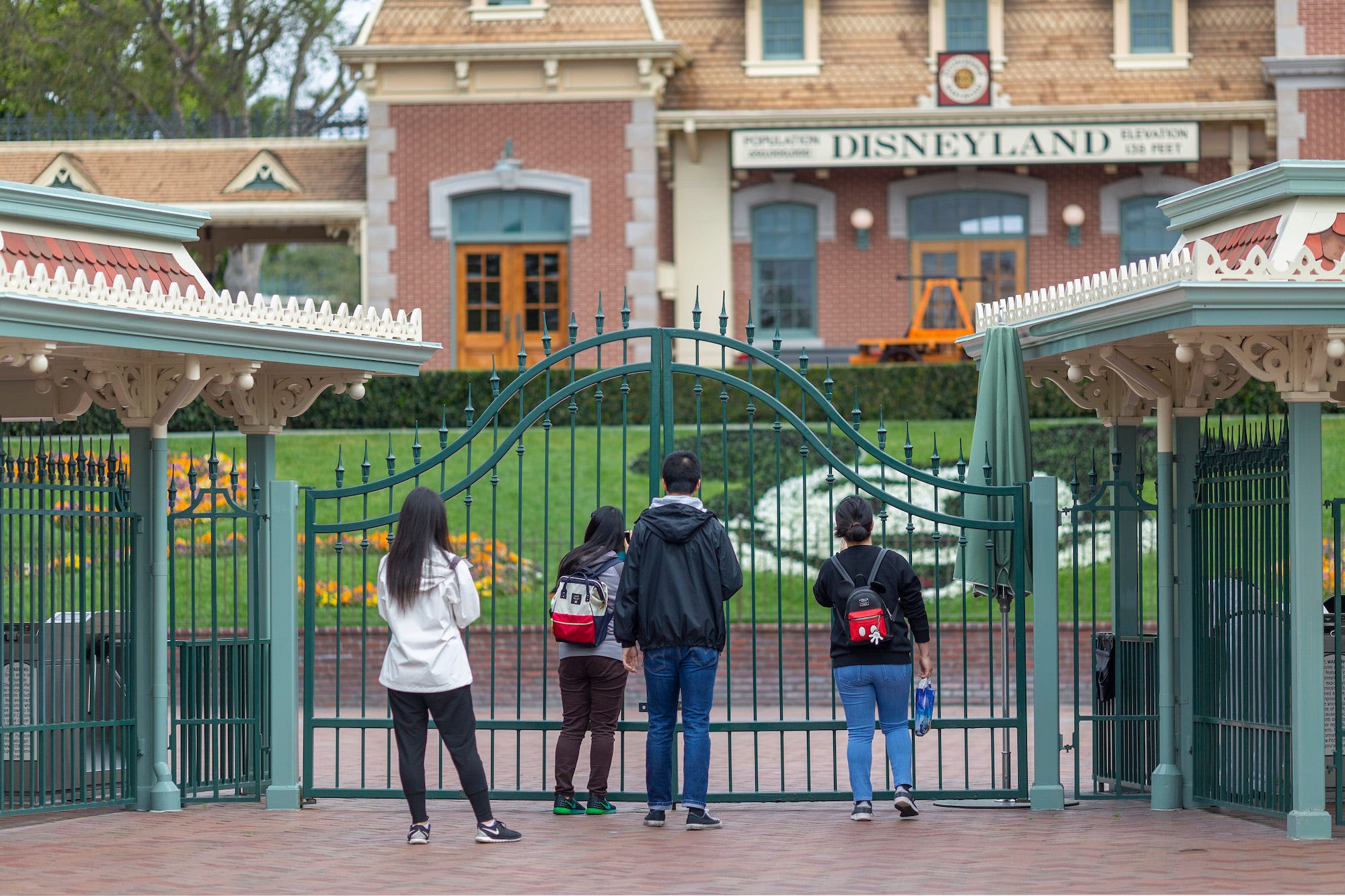 The company first shuttered Shanghai Disney Resort on January 25, and Hong Kong Disneyland followed suit the next day. Tokyo Disney Resort was next to close its doors, on February 29, with Disneyland Paris and Disneyland in California doing the same on March 14. Most recently, Disney World shut down on March 16.

Even while theme parks are closed, the pandemic has affected each Disney location dramatically, from newly-installed sanitizer stations to temperature checks at entrances. Now, Disney’s theme parks are slowly beginning to reopen with these measures still in place.

Disney World is set to begin reopening on July 11 and July 15, while Shanghai Disneyland is “currently open for visitation on an ‘Advanced Reservation’-only basis,” according to its website. Disneyland,Disneyland Paris, Hong Kong Disneyland, and Tokyo Disneyland have not yet revealed their reopening plans.