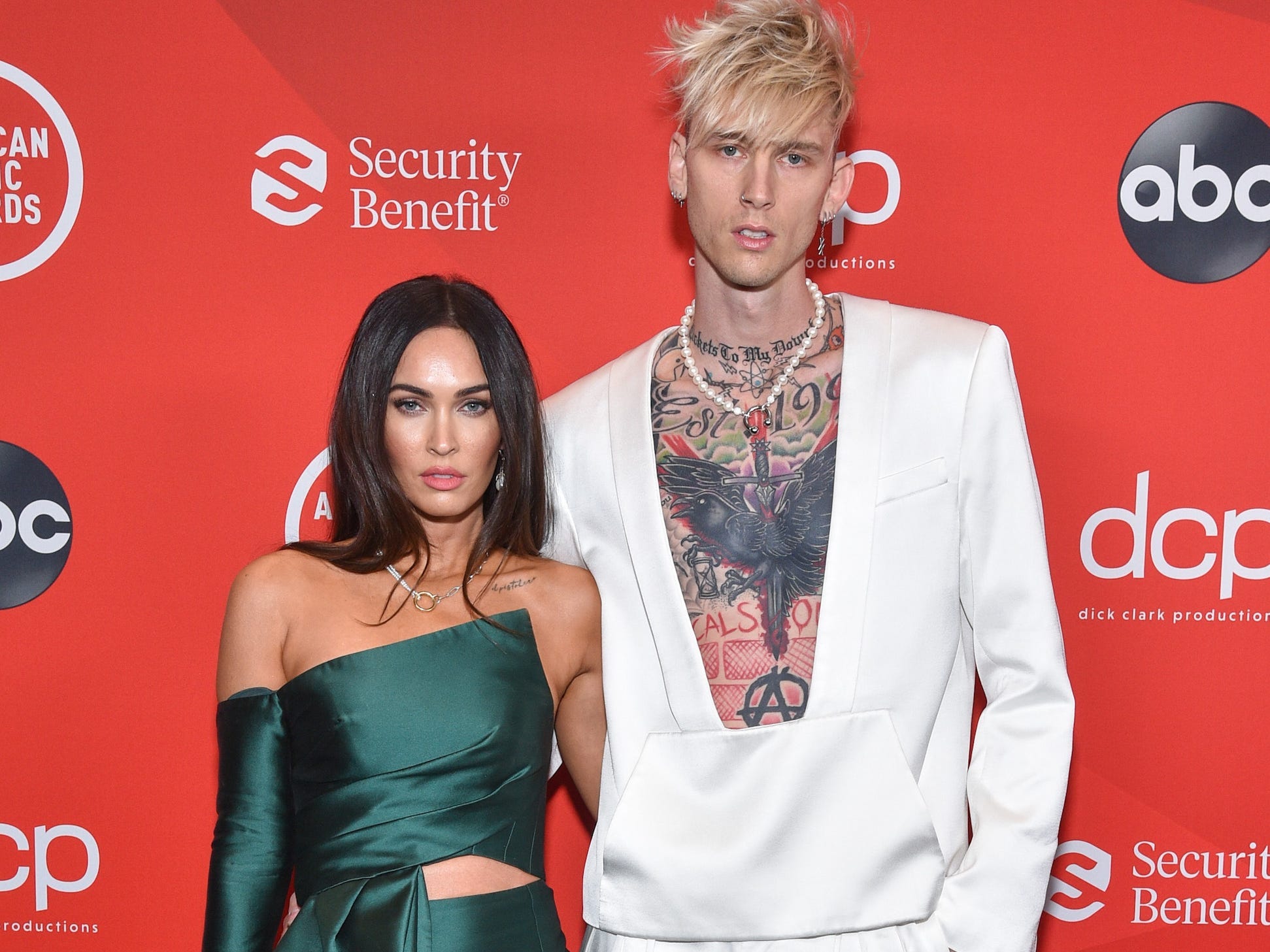 Back in the ’90s, for example, Will Smith and Jada Pinkett Smith walked their first red carpet as a couple in ensembles that complemented the decade. More recently, Gwen Stefani and Blake Shelton showed off their contrasting styles for their first joint appearance.

Here’s a look at what celebrity couples wore for their first red-carpet events together.

Jada Pinkett Smith and Will Smith embodied ’90s style at the “Devil in a Blue Dress” premiere. 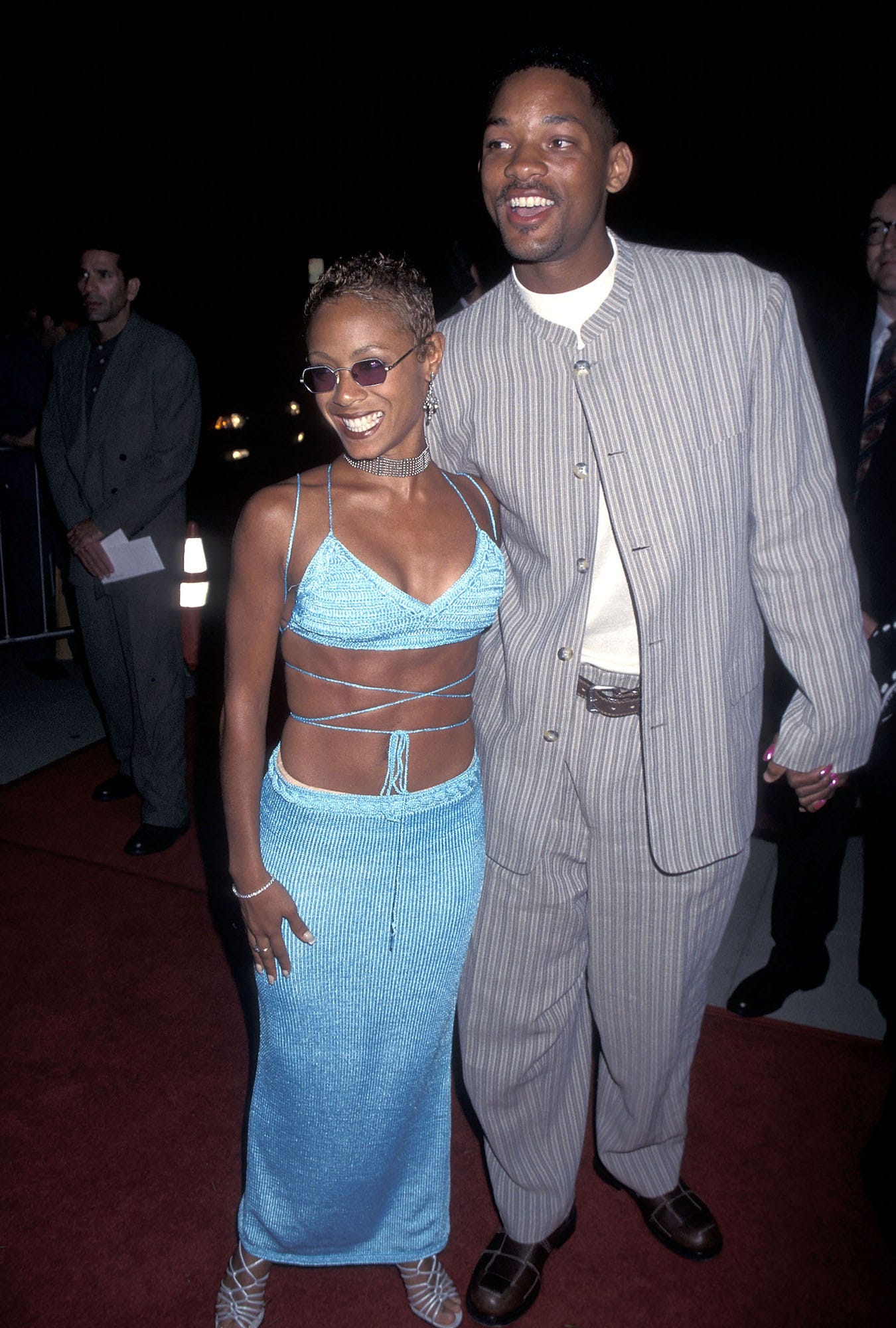 Jada looked stunning in a long blue skirt and a matching bralette with straps that crisscrossed over her stomach. She also wore silver sandals, a choker necklace, and tiny sunglasses.

Will, on the other hand, wore a grey suit with white stripes, a white shirt, and patchwork shoes.

Sarah Michelle Gellar and Freddie Prinze Jr. coordinated in leather for the MTV Movie Awards in 2000. 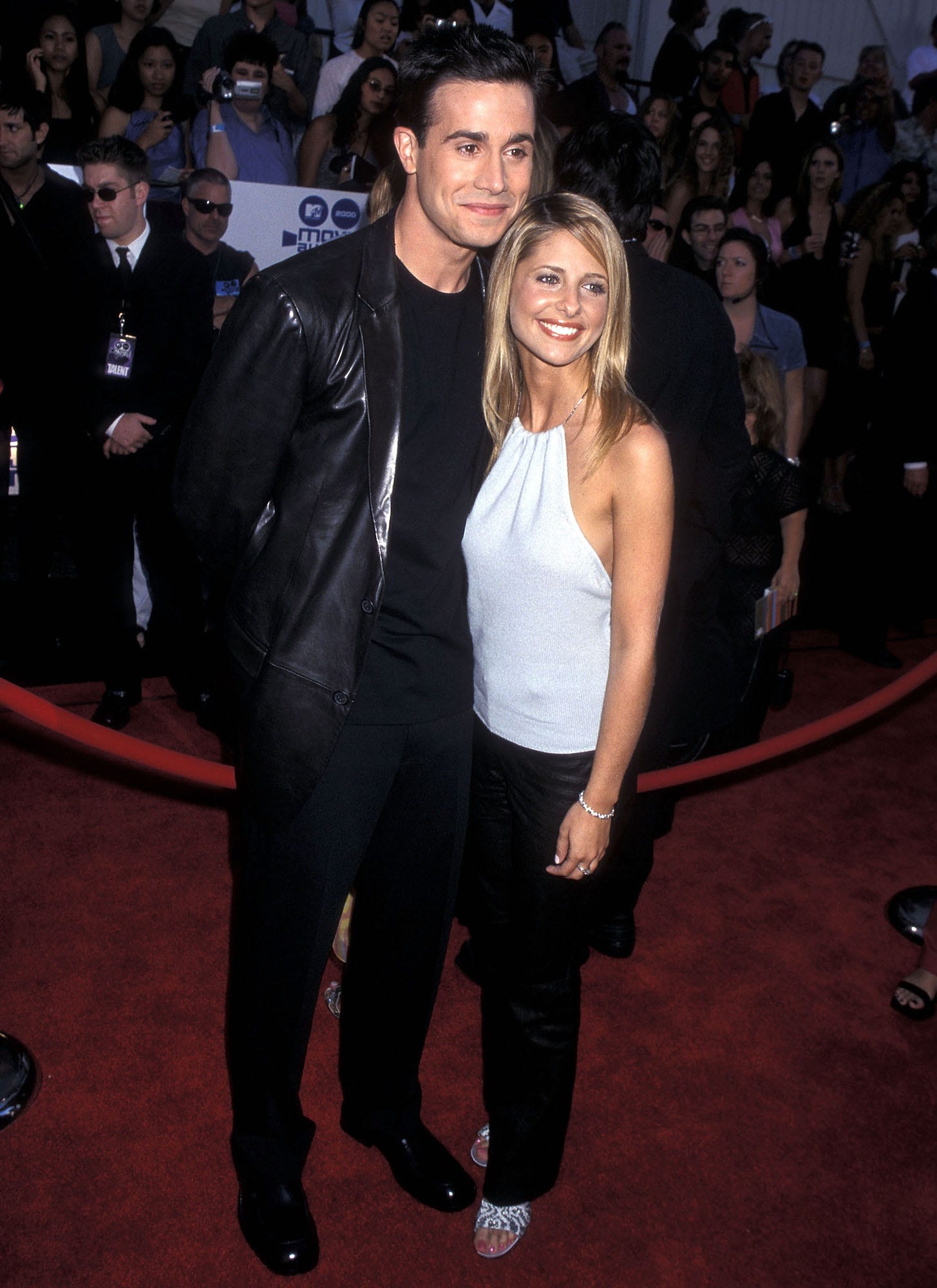 Calista Flockhart and Harrison Ford confirmed their relationship at the 2002 premiere of “K-19: The Widowmaker.” 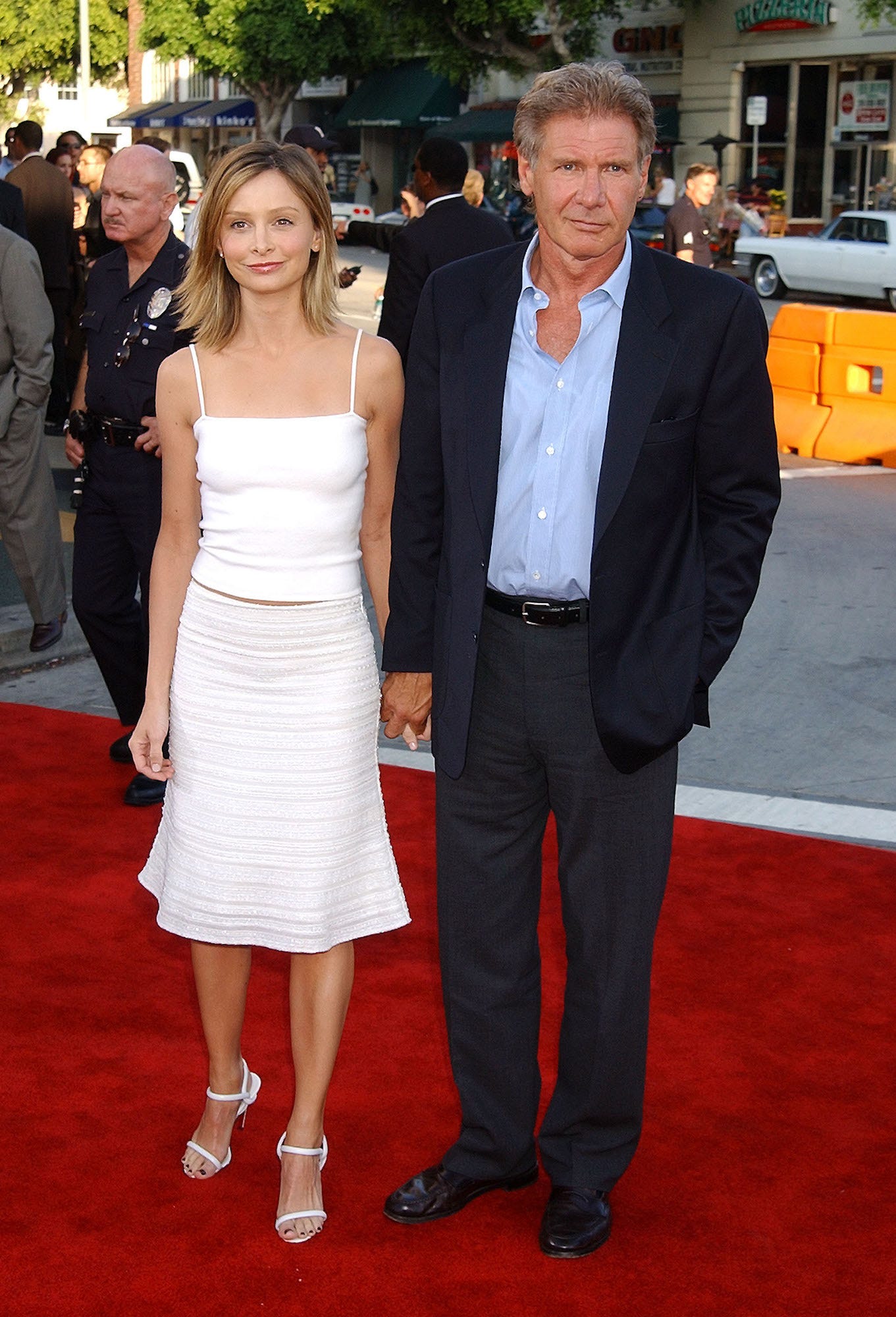 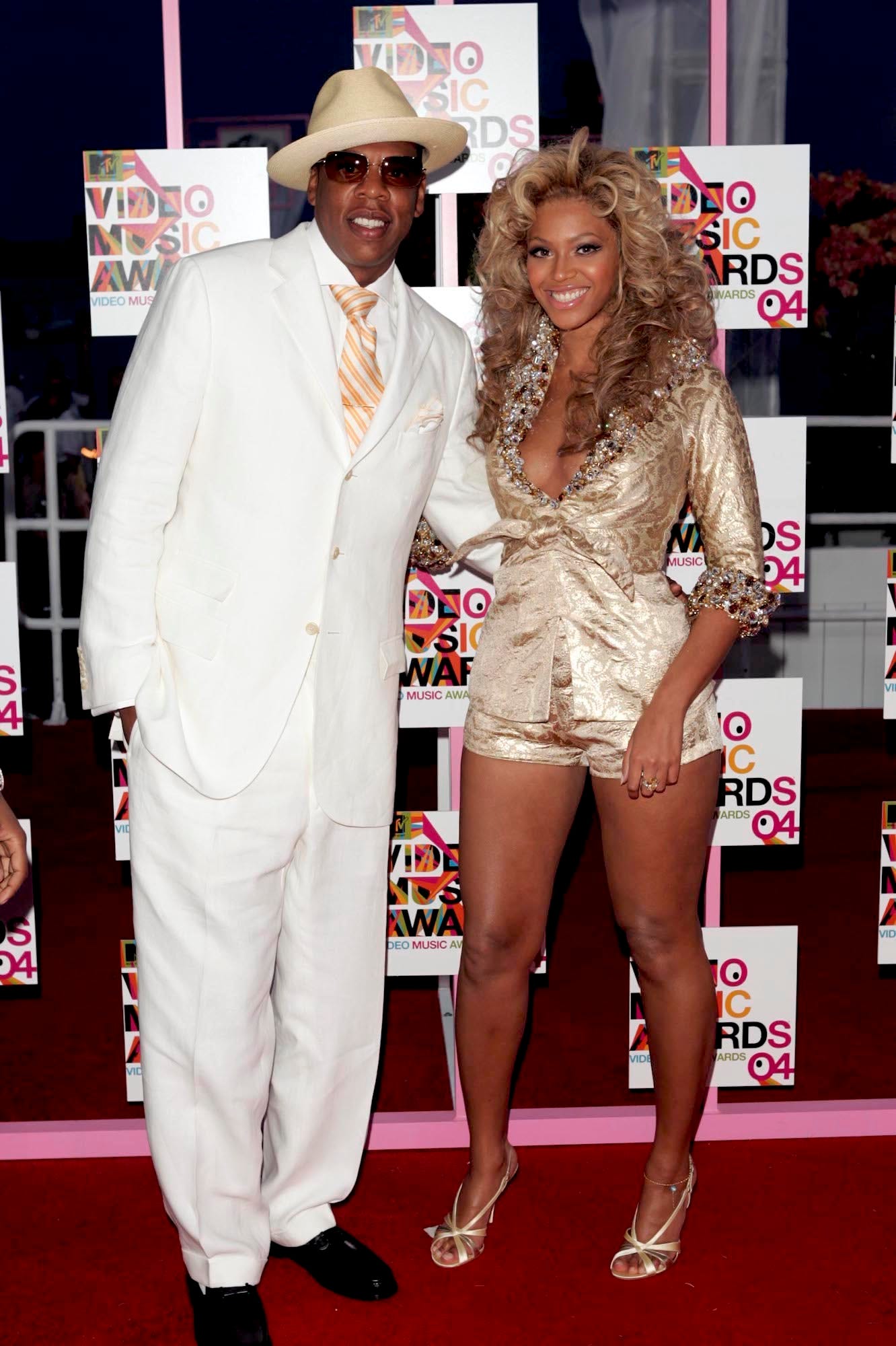 Peter Kramer/Getty ImagesJay-Z and Beyoncé in Miami, Florida, on August 29, 2004.

Jay-Z showed off numerous fashion trends from the early aughts, including sunglasses with coloured lenses, an oversized suit, a yellow striped tie, and a tan fedora.

Beyoncé coordinated in a sparkling two-piece set. Her long-sleeved shirt had a V-shaped neckline and crystal embellishments on the sleeves and neckline, and her shorts were made from the same printed fabric. She also wore a curly hairstyle and strappy sandals.

John Legend and Chrissy Teigen walked their first red carpet together at the 2008 Grammy Awards. 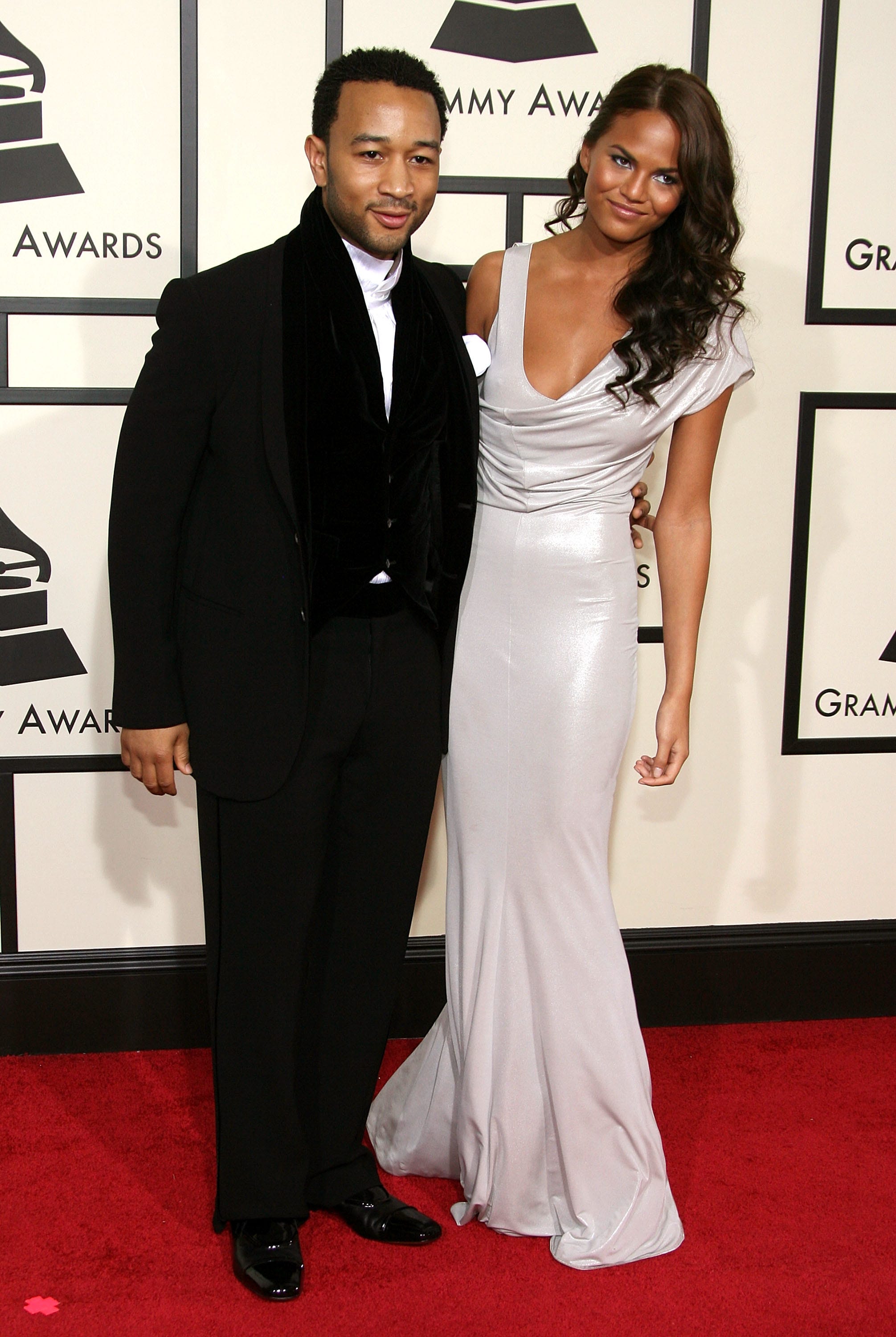 Frazer Harrison/Getty ImagesJohn Legend and Chrissy Teigen at the Grammy Awards on February 10, 2008.

Legend opted for a black suit with a velvet vest and high-neck shirt underneath. Teigen, on the other hand, wore a shimmering gown with one short sleeve and a strap on the other side.

Gabrielle Union and Dwyane Wade incorporated red into their outfits while attending the Summer Groove Benefit Dinner in 2010. 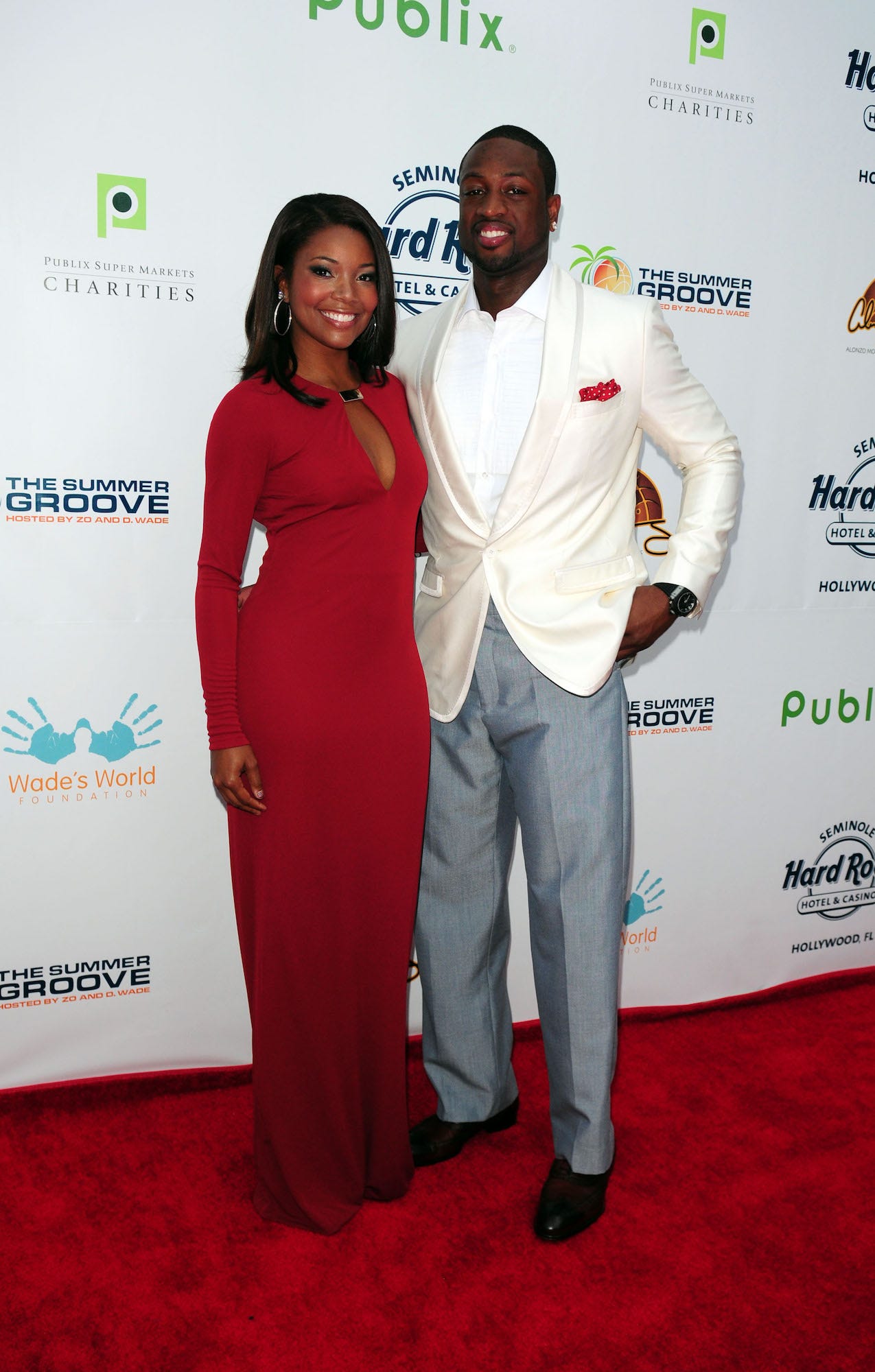 Union opted for a red, long-sleeved dress with a daring cutout across her chest. She also wore silver hoops and rosy makeup.

Wade chose a mismatched suit with a cream jacket, white shirt, and grey pants, though he also included a red pocket square to match Union. 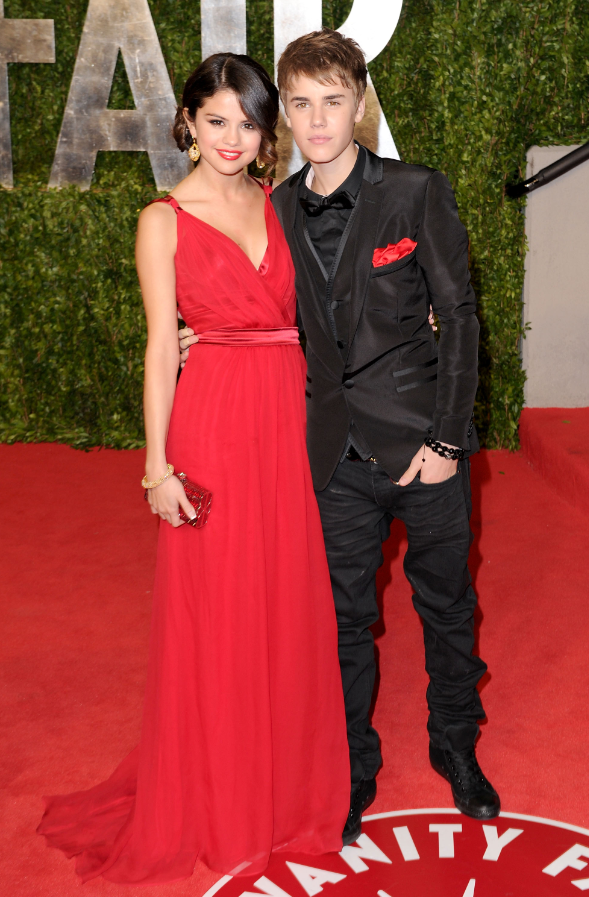 Their outfits were seemingly coordinated, with Gomez wearing a strapless red gown and Bieber wearing a red pocket square with his all-black ensemble. They also wore accessories that fell in line with their personal styles: Gomez wore red lipstick, and Bieber wore black sneakers.

The couple reportedly broke up in March 2018.

Kanye West and Kim Kardashian West walked the red carpet together for the first time at the 2012 “Cruel Summer” premiere. 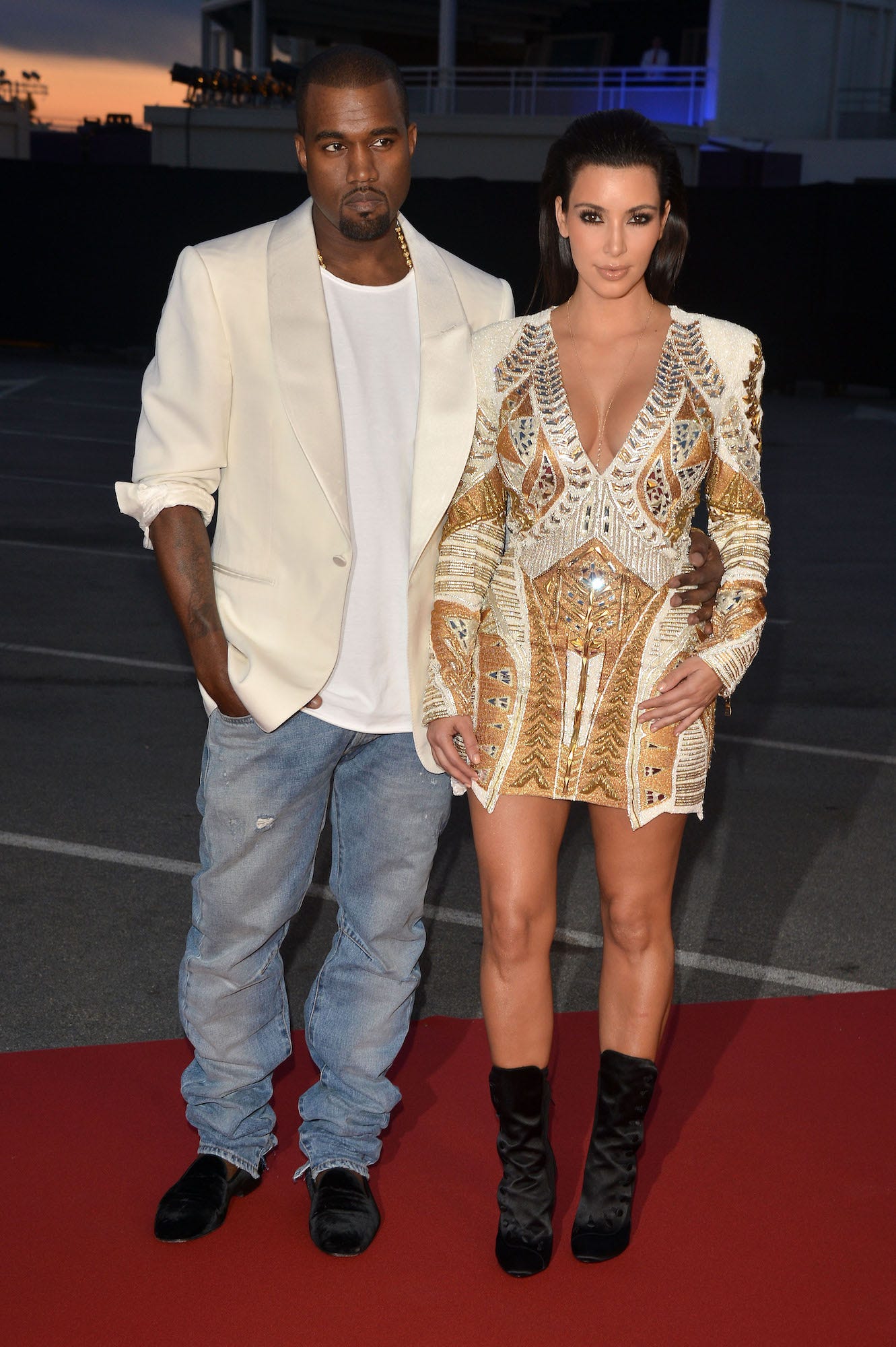 George Pimentel/Getty ImagesKanye West and Kim Kardashian West in Cannes, France, on May 23, 2012

Kanye went for a casual look, wearing a cream blazer and white shirt over light-washed jeans and velvet loafers.

Kim took the opposite approach, sticking with her usual glam in a patterned minidress and black ankle-length boots. 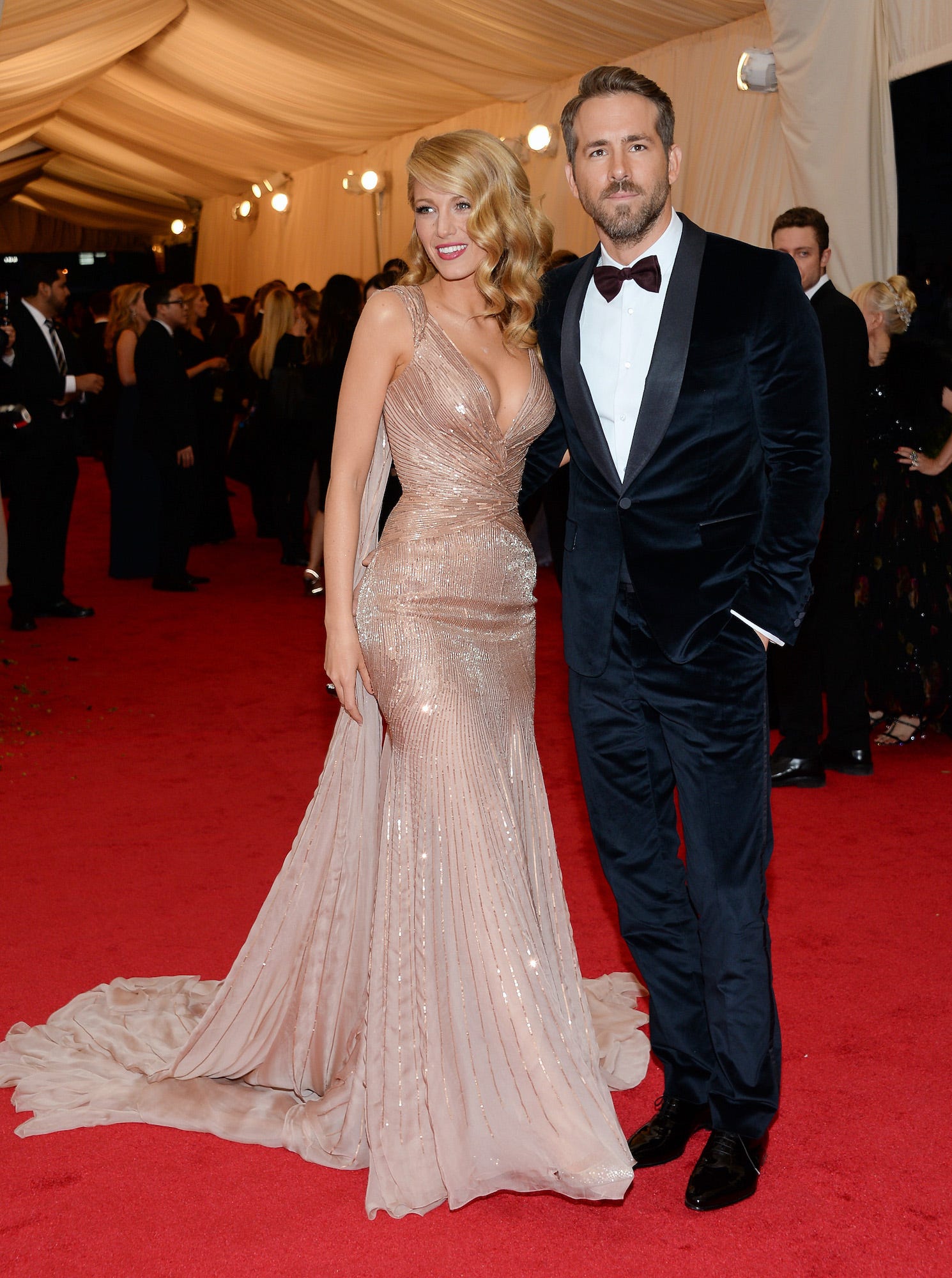 Evan Agostini/APBlake Lively and Ryan Reynolds in New York City for the Met Gala on May 5, 2014.

Lively’s gown – designed by Gucci – was made from silk chiffon and rose-gold sequins. It had a plunging neckline, mermaid-style skirt, and chiffon scarves that extended into a long train behind her, as reported by Harper’s Bazaar. She completed the look with curled hair and red lipstick.

Russell Wilson and Ciara put personal touches on their coordinated red-carpet looks at the 2015 BET Awards. 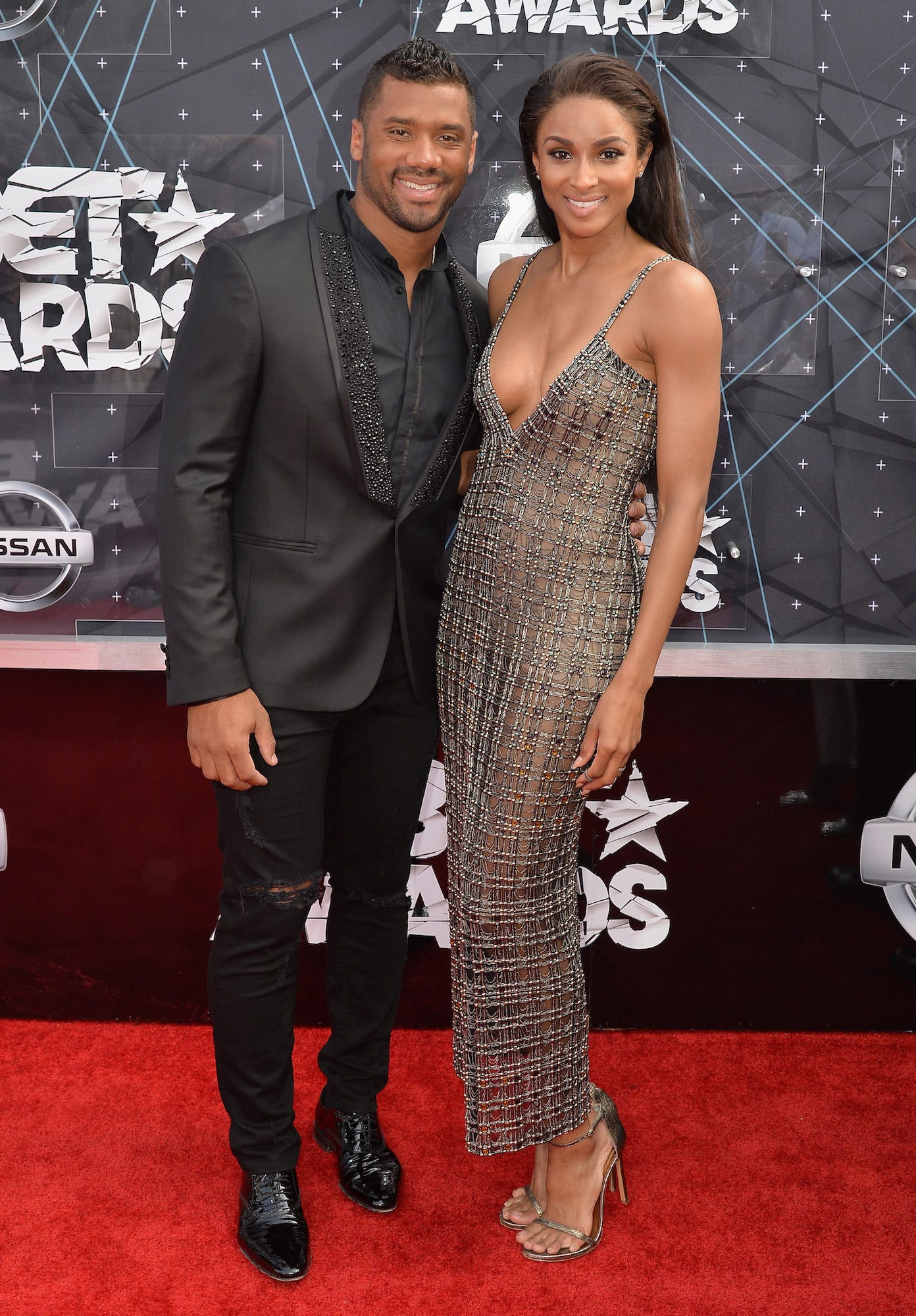 Earl Gibson/BET/Getty ImagesRussell Wilson and Ciara in Los Angeles for the BET Awards on June 28, 2015. 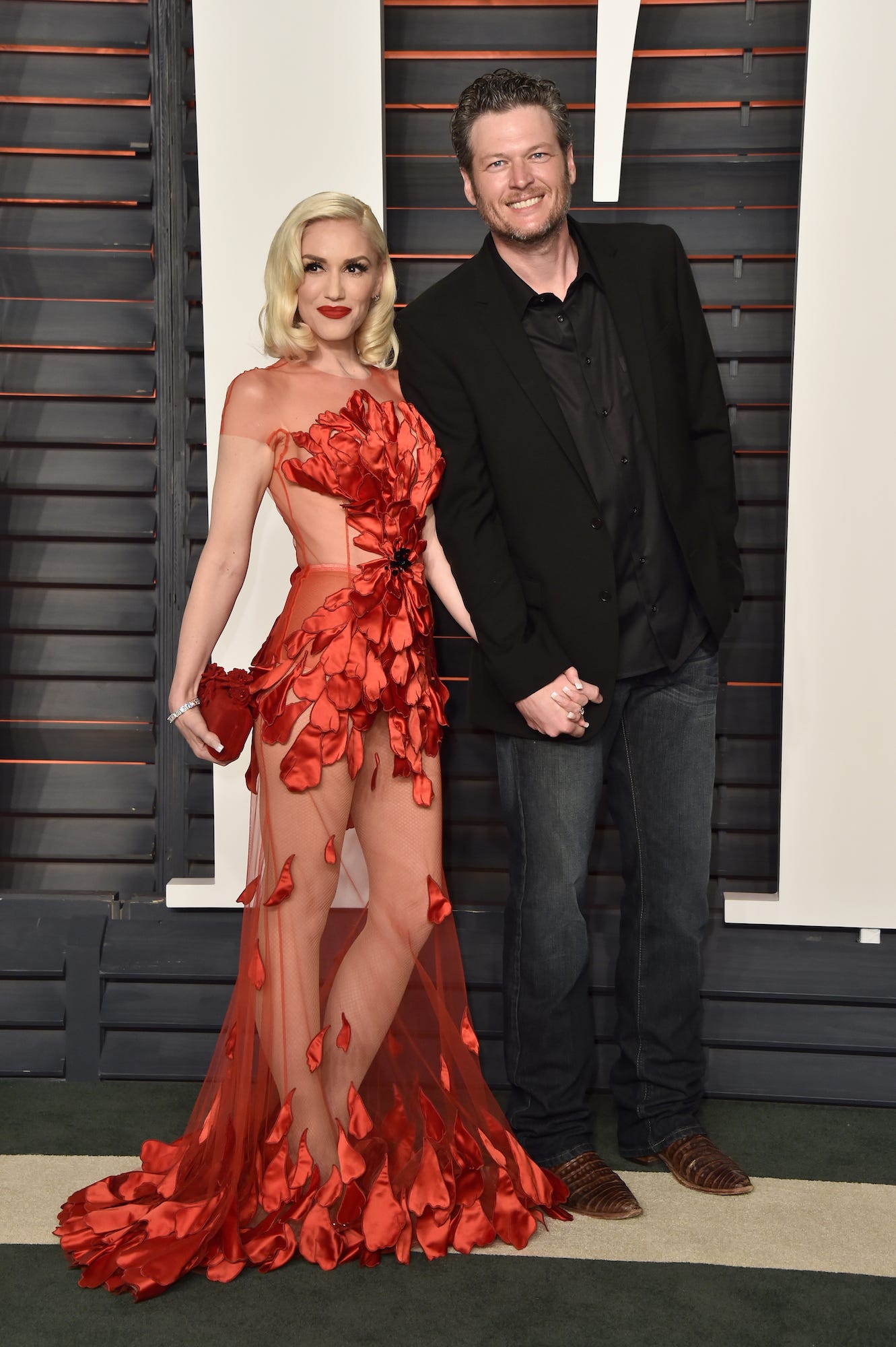 The couple’s outfits were completely different. Stefani wore a red, semi-sheer gown covered in fabric that looked like flower petals. It was designed by Yanina Couture. 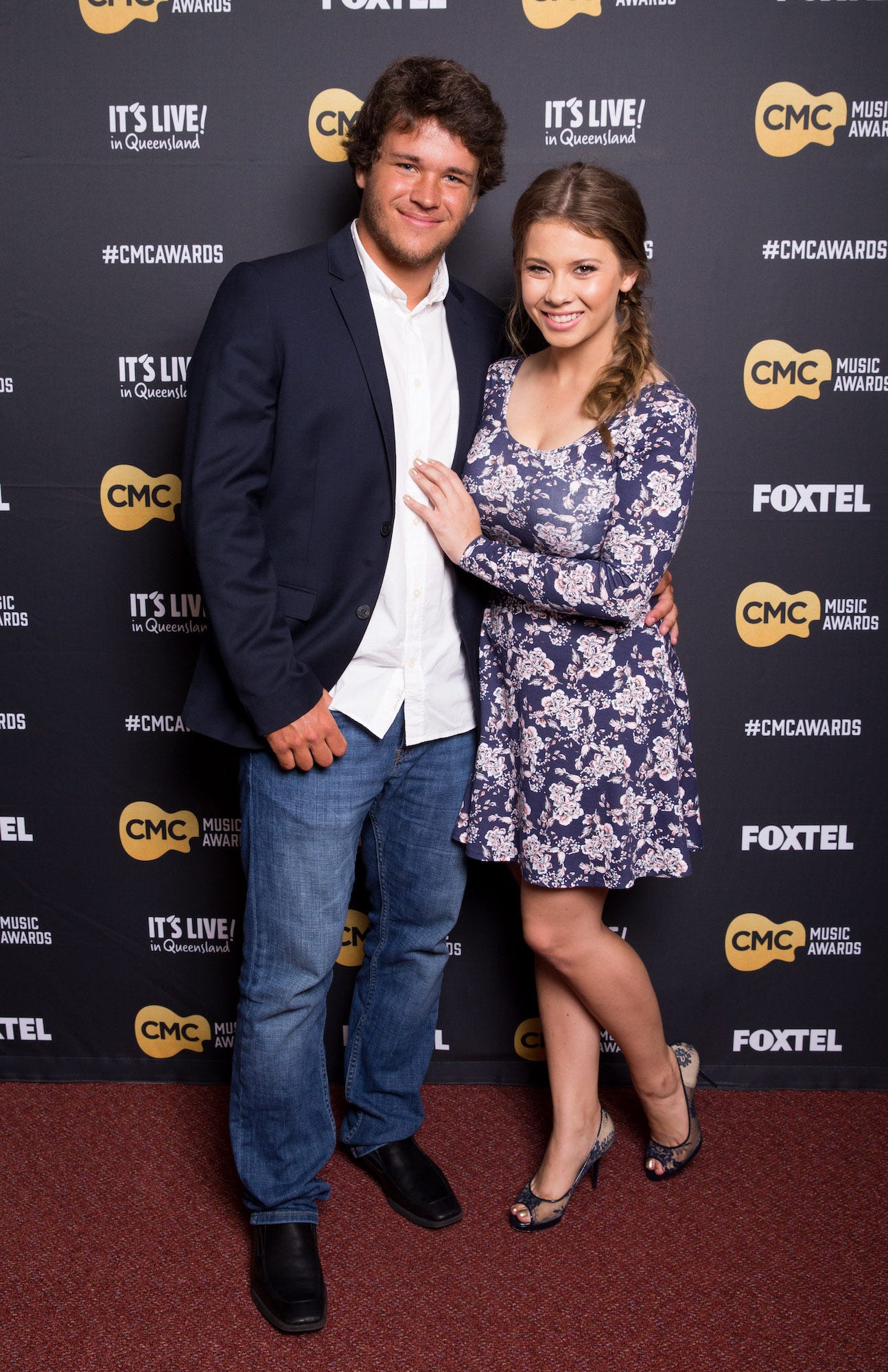 Rose Leslie and Kit Harrington wore elegant ensembles to confirm their relationship at the 2016 Olivier Awards. 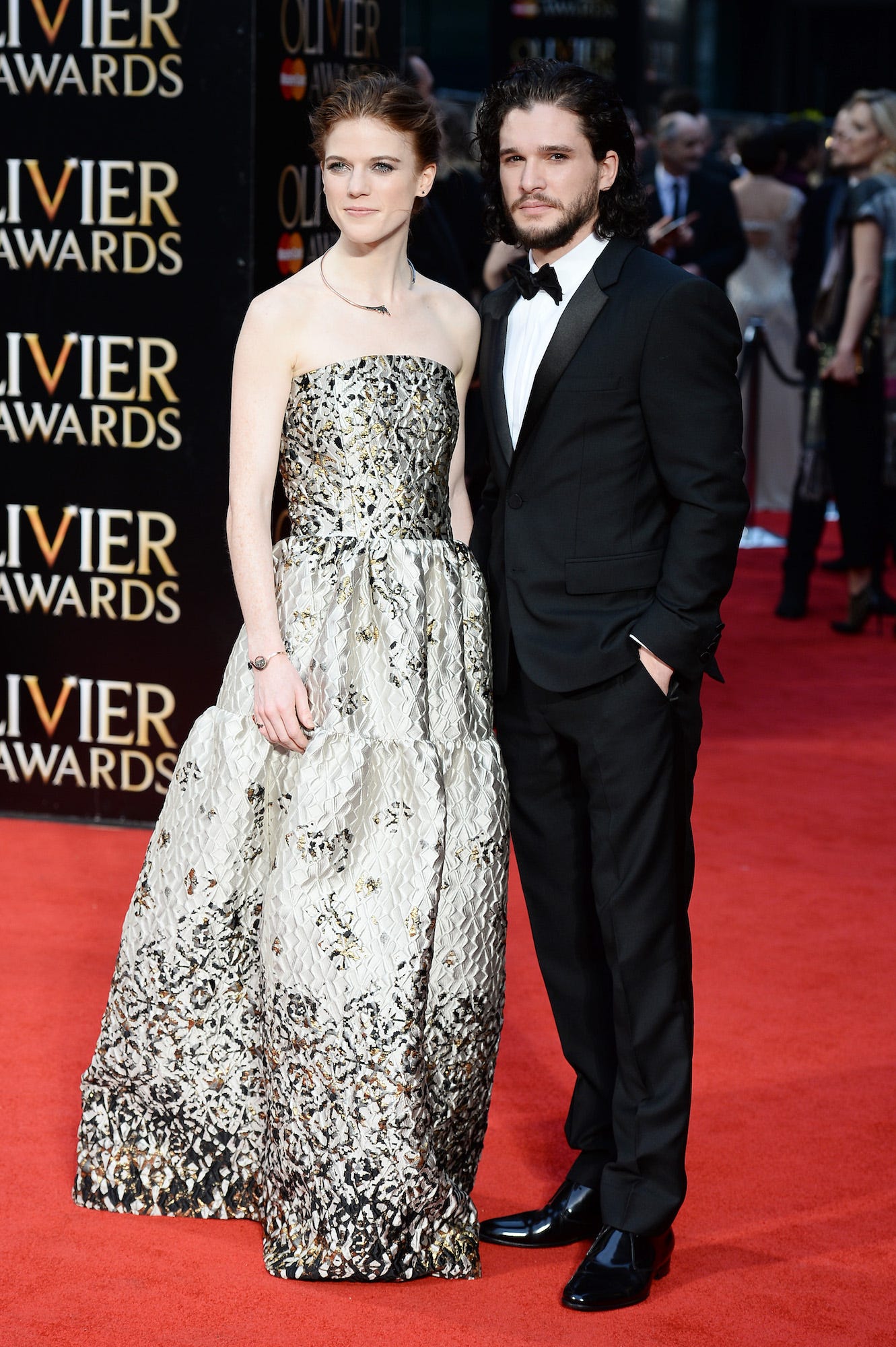 Leslie wore a black-and-silver dress with a strapless top and two-tiered skirt. She also paired it with a thin necklace and updo hairstyle.

Harrington perfectly complemented his now-wife in a classic tuxedo and bow tie. 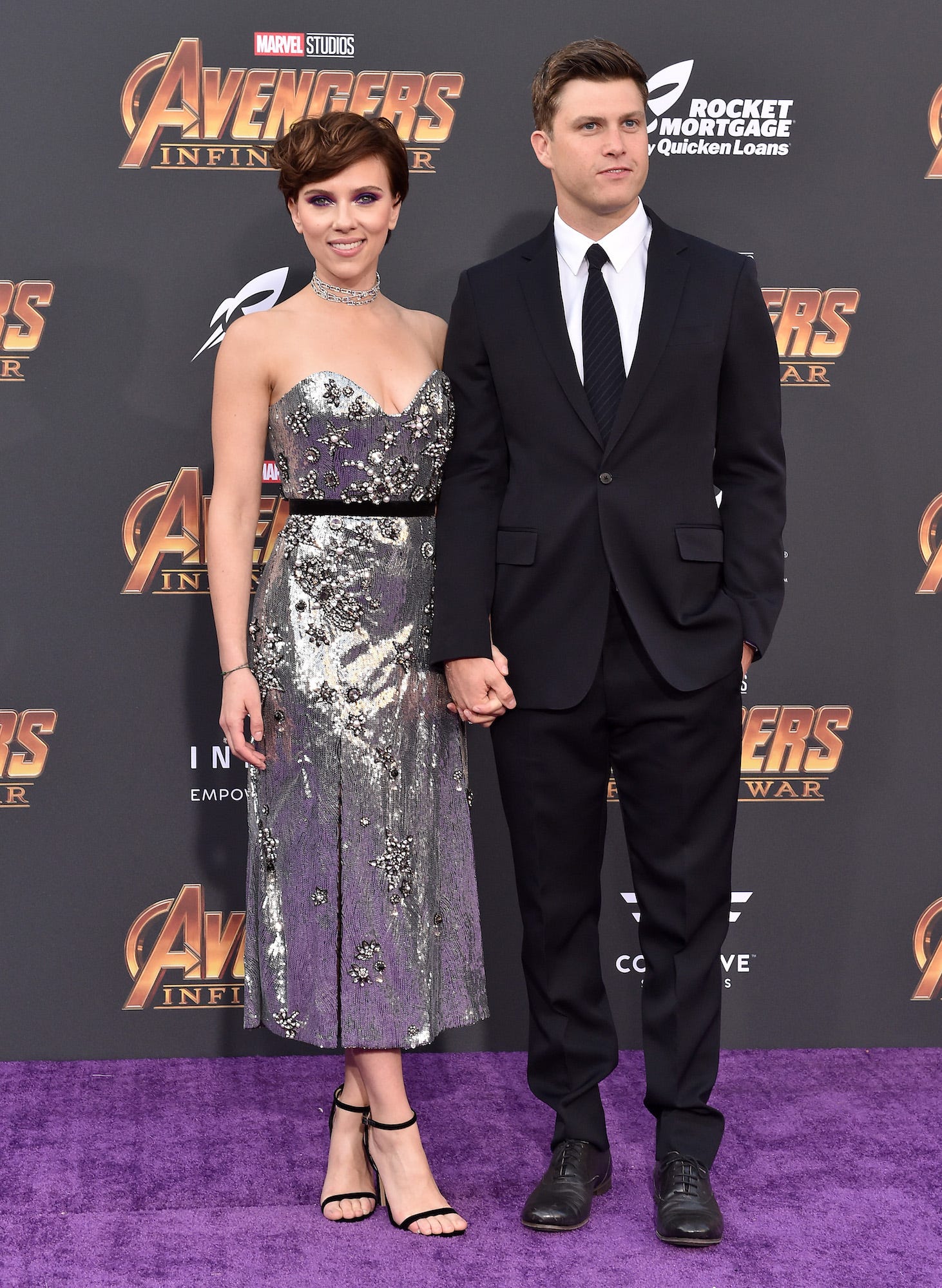 Her reflective Erdem dress was strapless and covered in crystals and pearls. She also wore black sandals, a shiny choker, and a short curled hairstyle.

Jost, on the other hand, went with a classic black suit, dress shoes, and a striped tie. 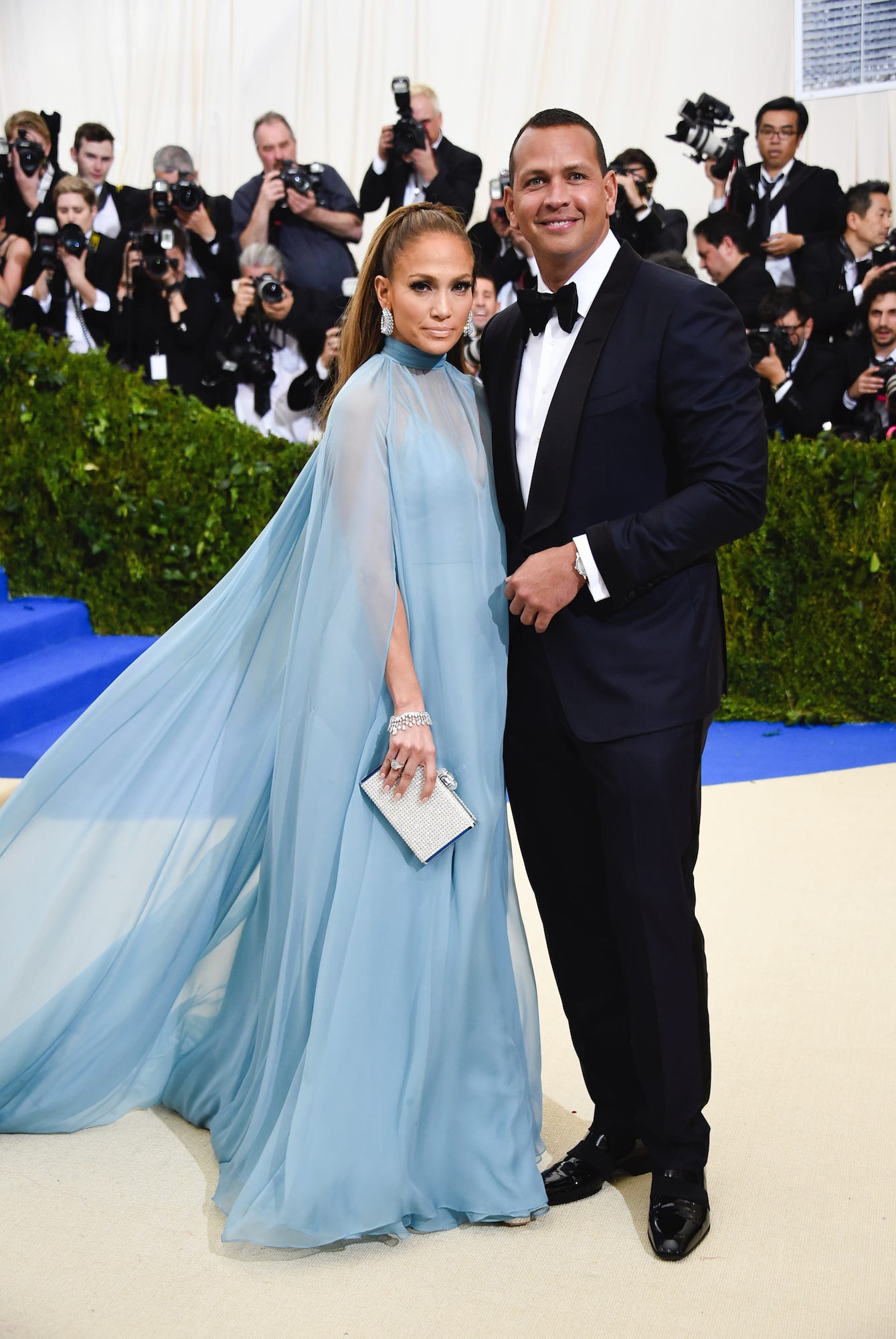 Evan Agostini/Invision/APJennifer Lopez and Alexander Rodriguez in New York City on May 1, 2017.

Though Rodriguez looked dapper in a navy tuxedo and black bow tie from Tom Ford, Lopez stole the show in her Valentino gown. The baby-blue dress was sleeveless with a semi-sheer, high-neck overlay that extended into a long train.

Priyanka Chopra and Nick Jonas also looked fashionable together at the 2017 Met Gala — despite not officially being a couple yet. 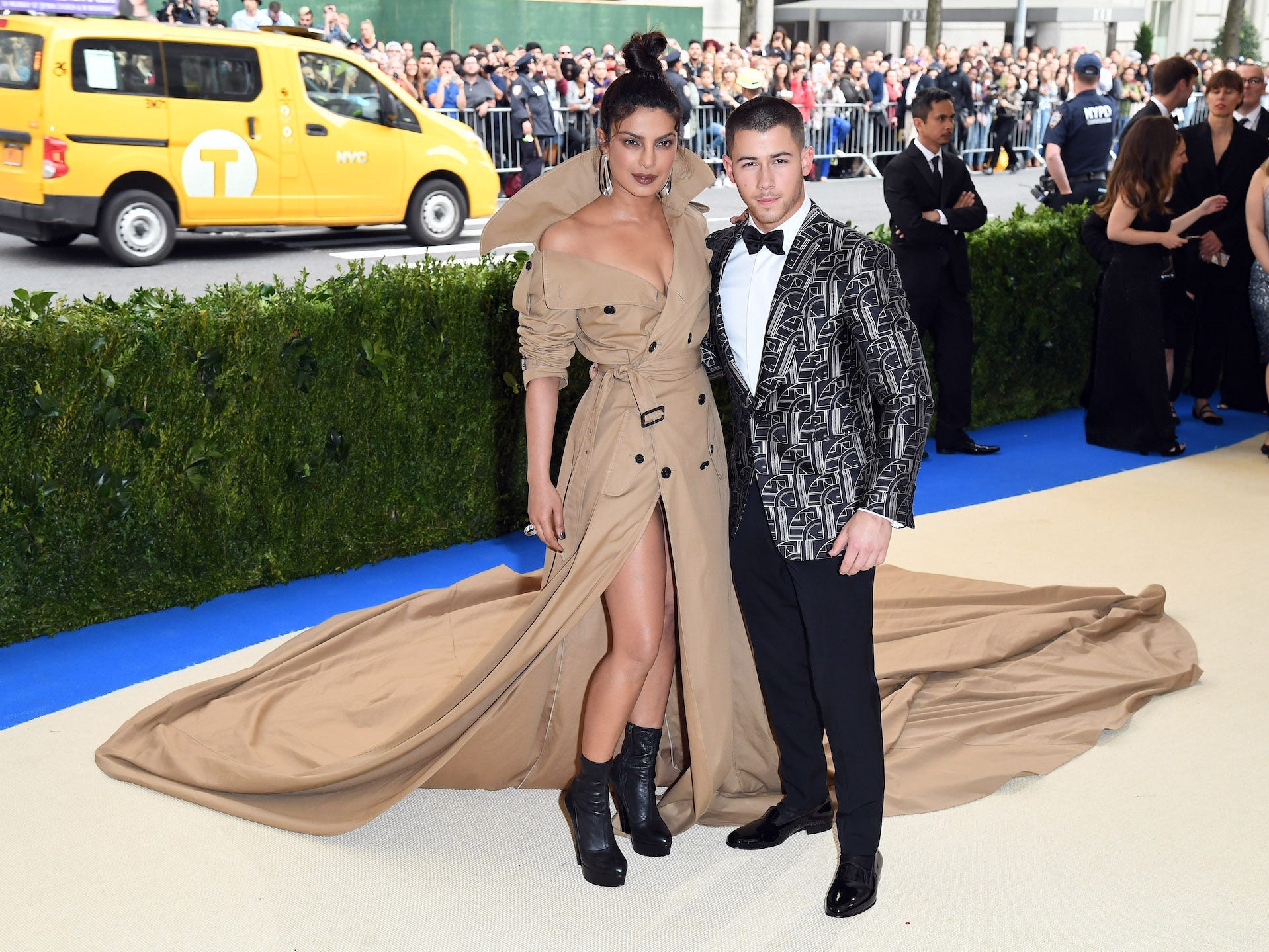 Karwai Tang/Getty ImagesPriyanka Chopra and Nick Jonas in New York for the Met Gala on May 1, 2017.

Chopra’s trench-coat style dress – which had an off-the-shoulder sleeve, plunging neckline, and giant skirt – was custom-made for her by Ralph Lauren. Jonas also wore a unique Ralph Lauren ensemble that night: a patterned suit jacket over a white shirt and bow tie.

Selena Gomez and The Weeknd opted for contrasting looks at the same event. 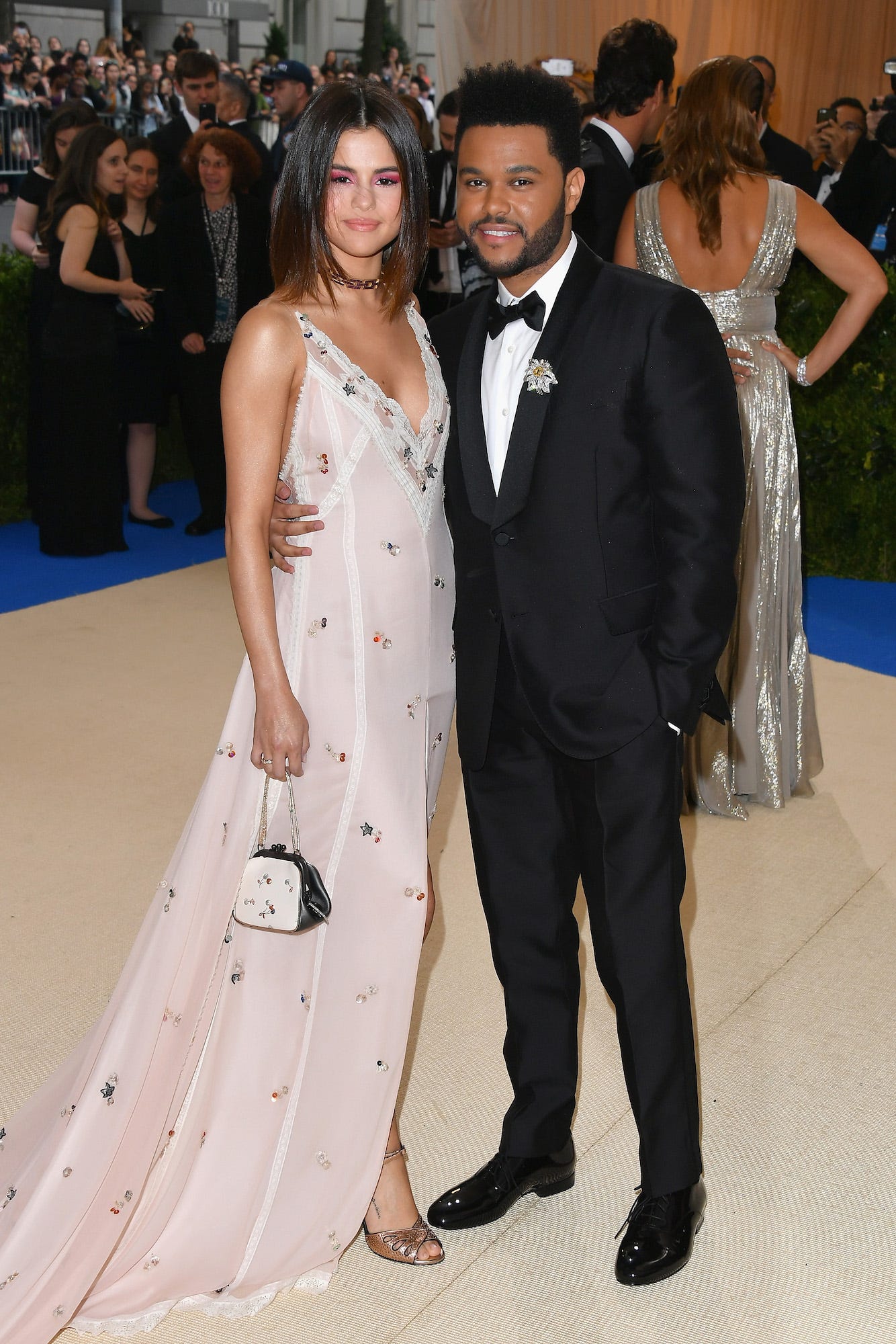 George Pimentel/Getty ImagesSelena Gomez and The Weeknd in New York City on May 1, 2017.

The Weeknd went with a more classic look that included a black suit, bow tie, and flower-shaped brooch. 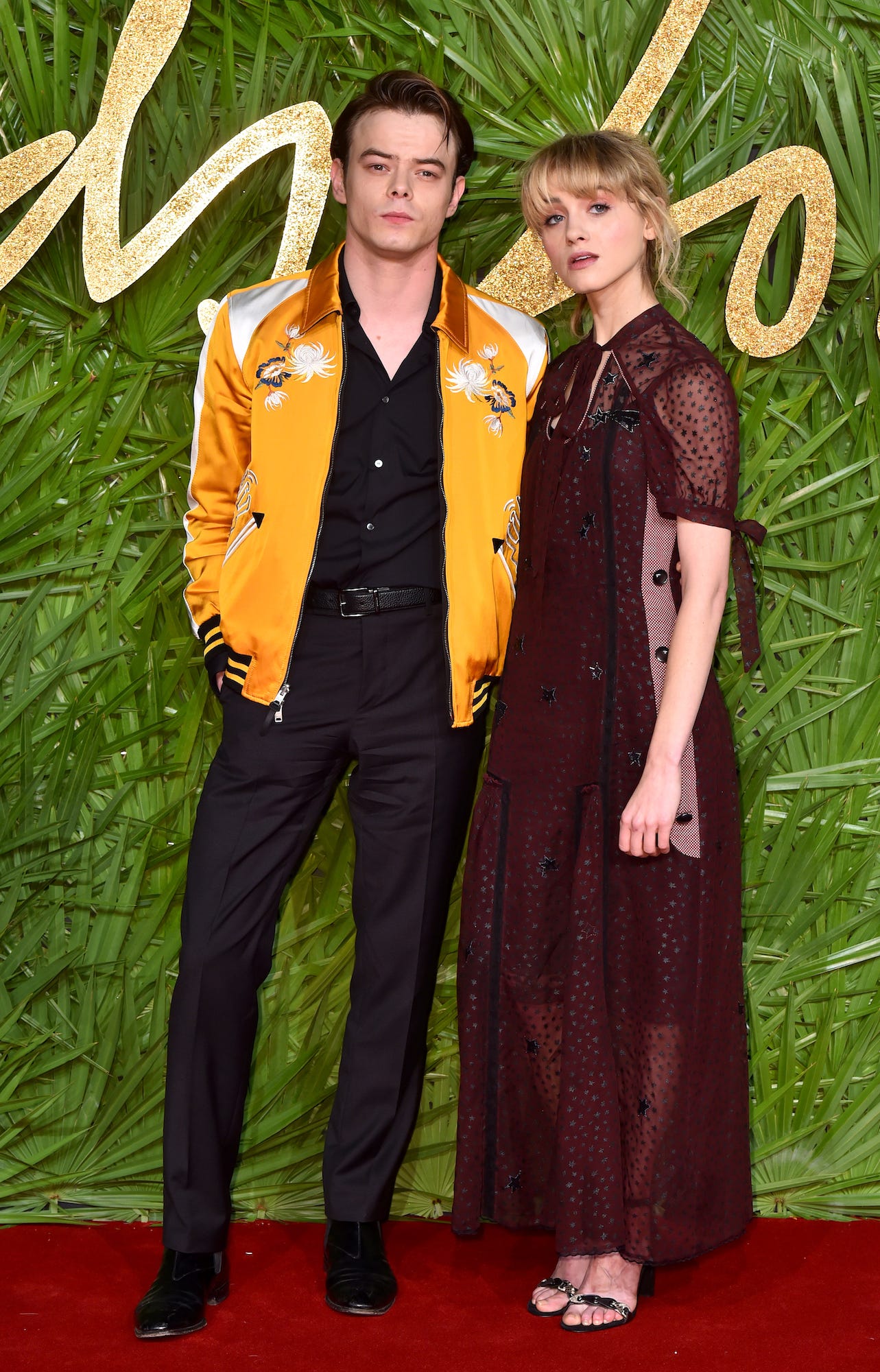 Sarah Paulson and Holland Taylor both wore black to the 2017 TIME 100 Gala. 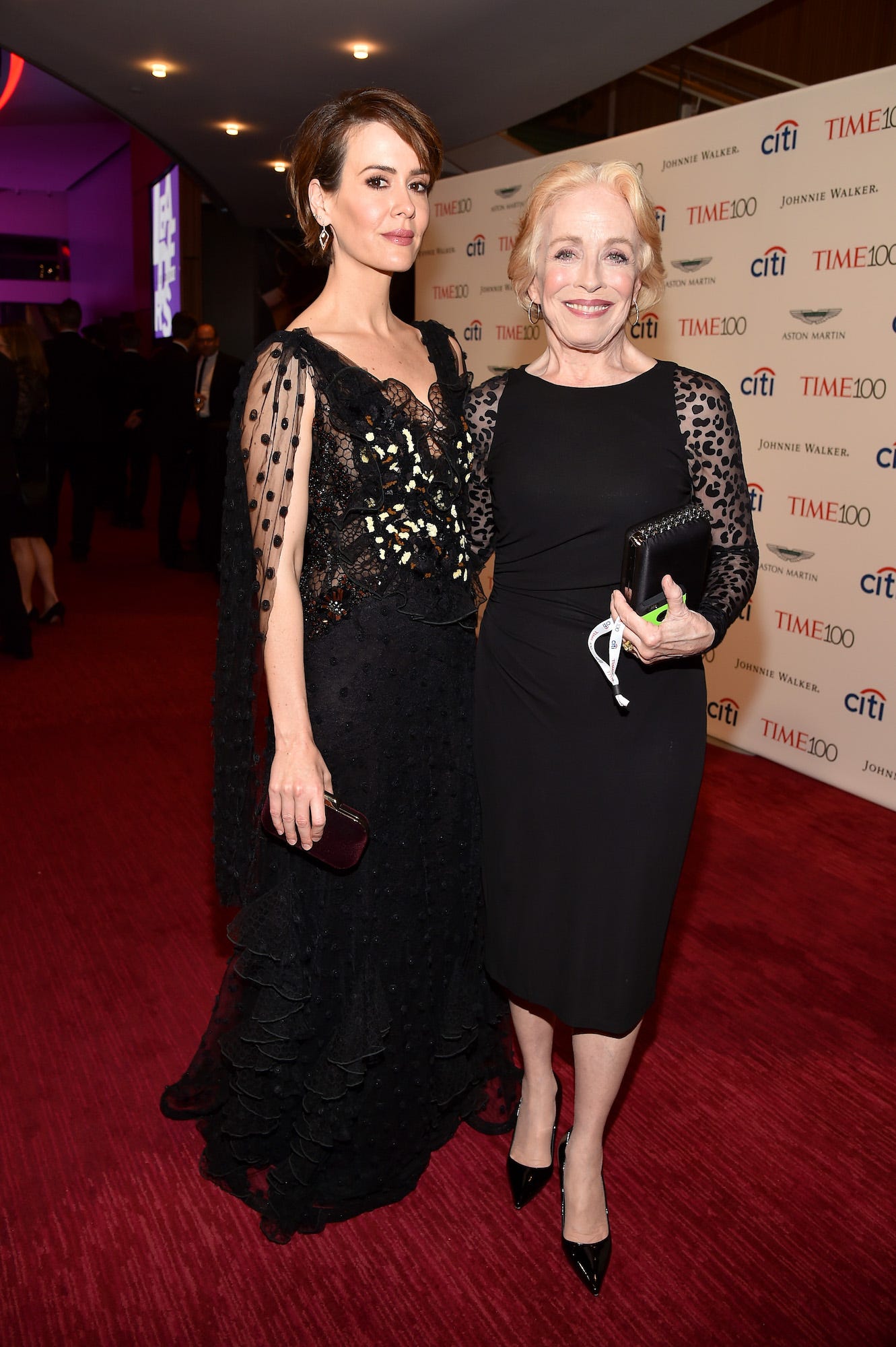 Taylor chose an ankle-length dress with sheer patterned sleeves, and Paulson wore a longer gown with a lace bodice and a sheer, polka-dot print cape.

They had previously attended the 2016 Critics’ Choice Awards together, though the Time 100 Gala was the first place they walked the red carpet as a couple. 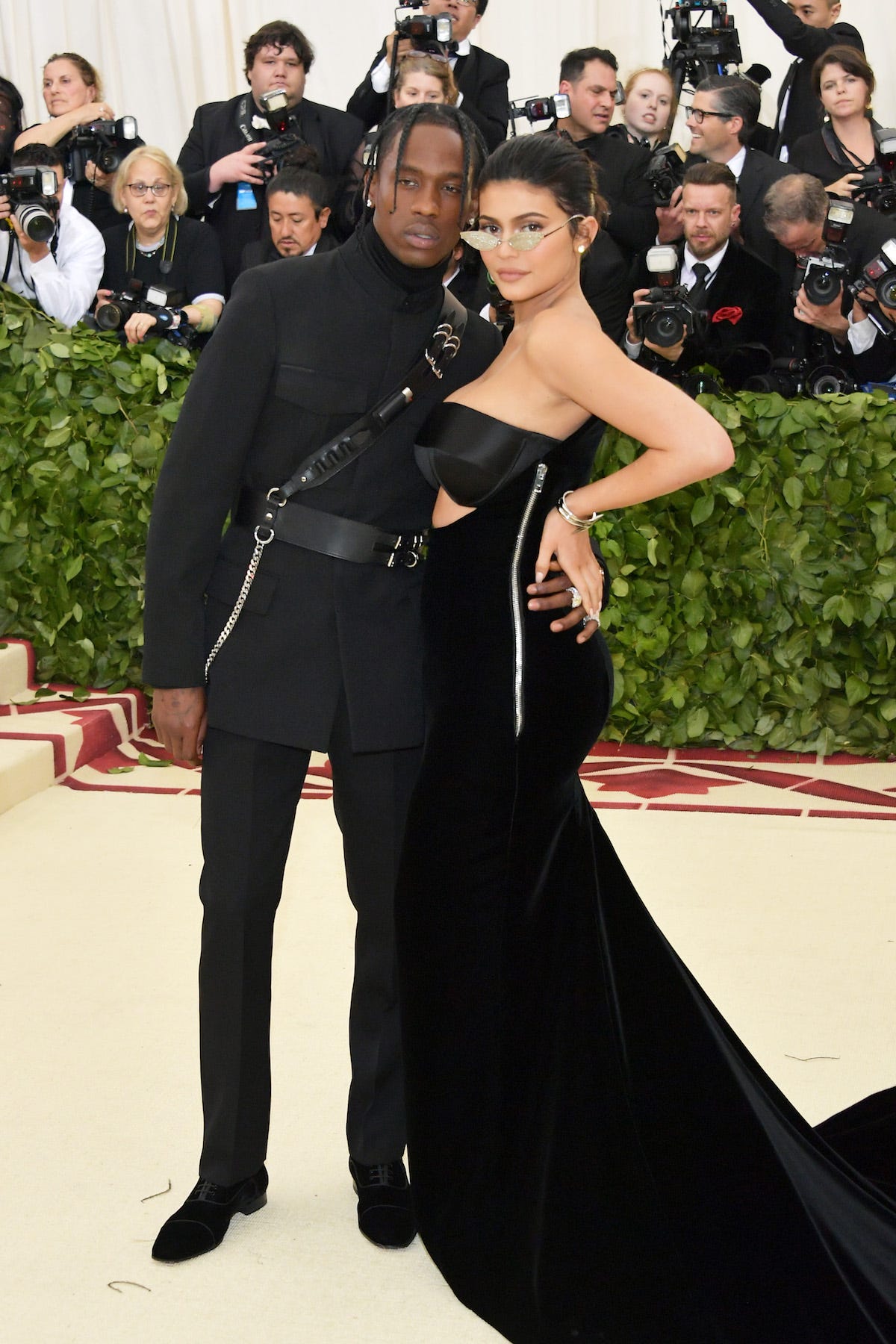 Jenner’s Alexander Wang gown stood out thanks to its strapless top, daring cutout, velvet skirt, and zipper detailing. Scott wore the same designer, matching Jenner in an all-black ensemble with a leather belt and shoulder strap.

At the same event, Elon Musk and Grimes showed off their couple style for the first time. 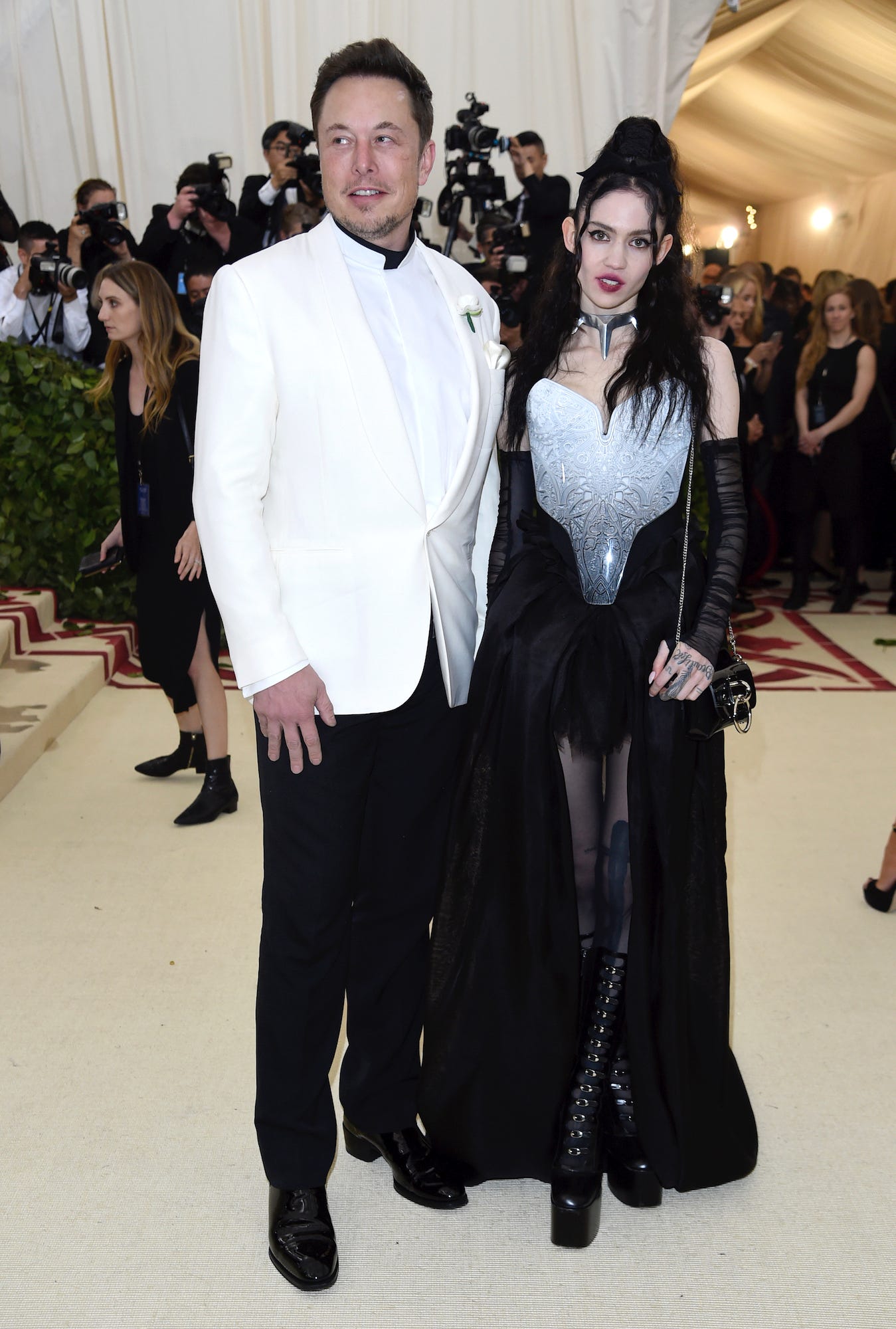 Evan Agostini/Invision/APElon Musk and Grimes attend the Met Gala in New York City on May 7, 2018.

Whereas Musk’s outfit was pretty simple – he wore a white top and blazer with dress pants – Grimes’ ensemble was much more detailed.

She wore a strapless dress with a white bodice, a black high-low skirt, semi-sheer gloves, and platform boots. The musician also wore a silver necklace that looked like the Tesla logo. 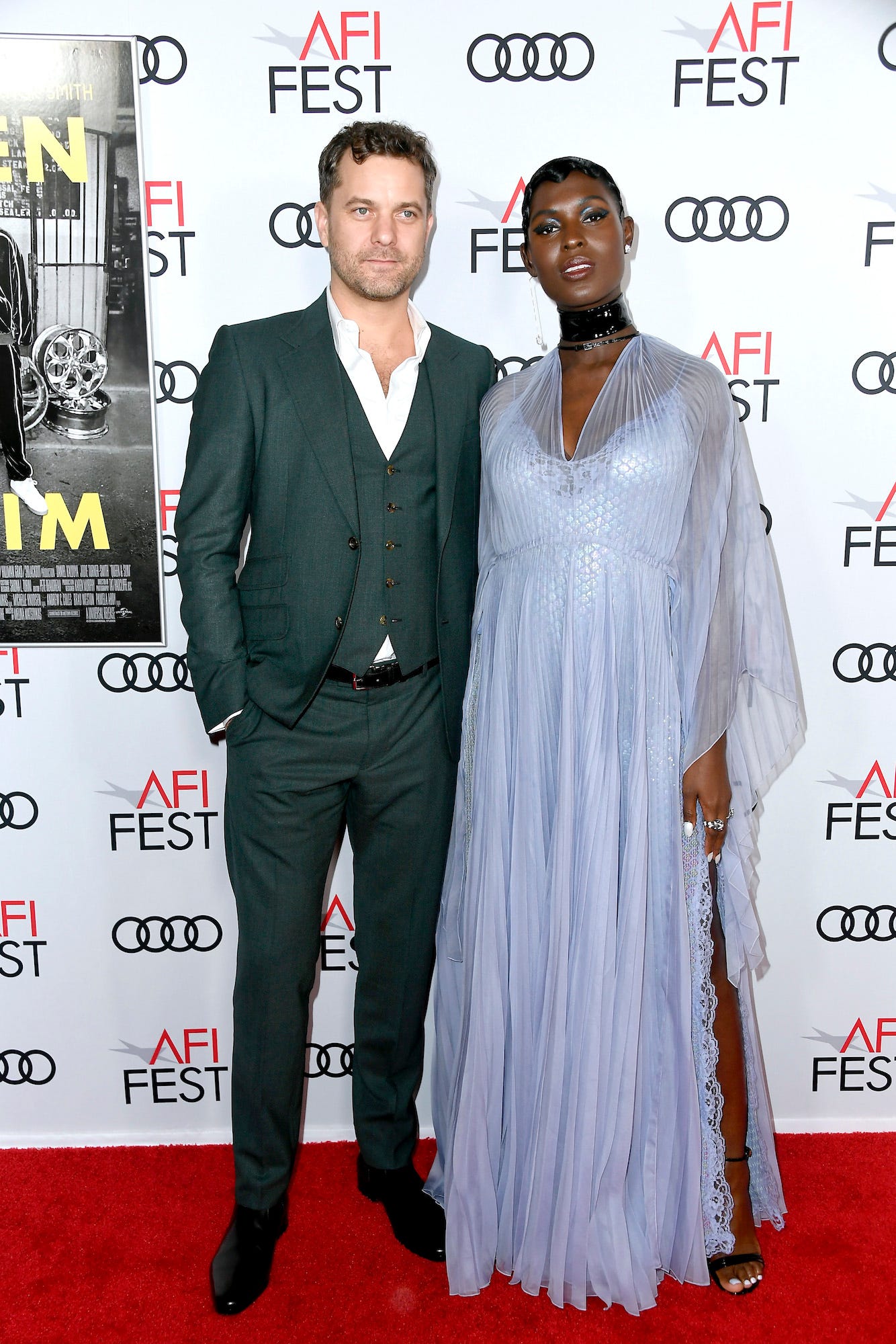 Jackson looked dapper in a green suit with a matching vest underneath, and Turner-Smith dazzled in a sleeveless blue dress with a crimped overlay. She also wore a shining black choker necklace and black sandals. 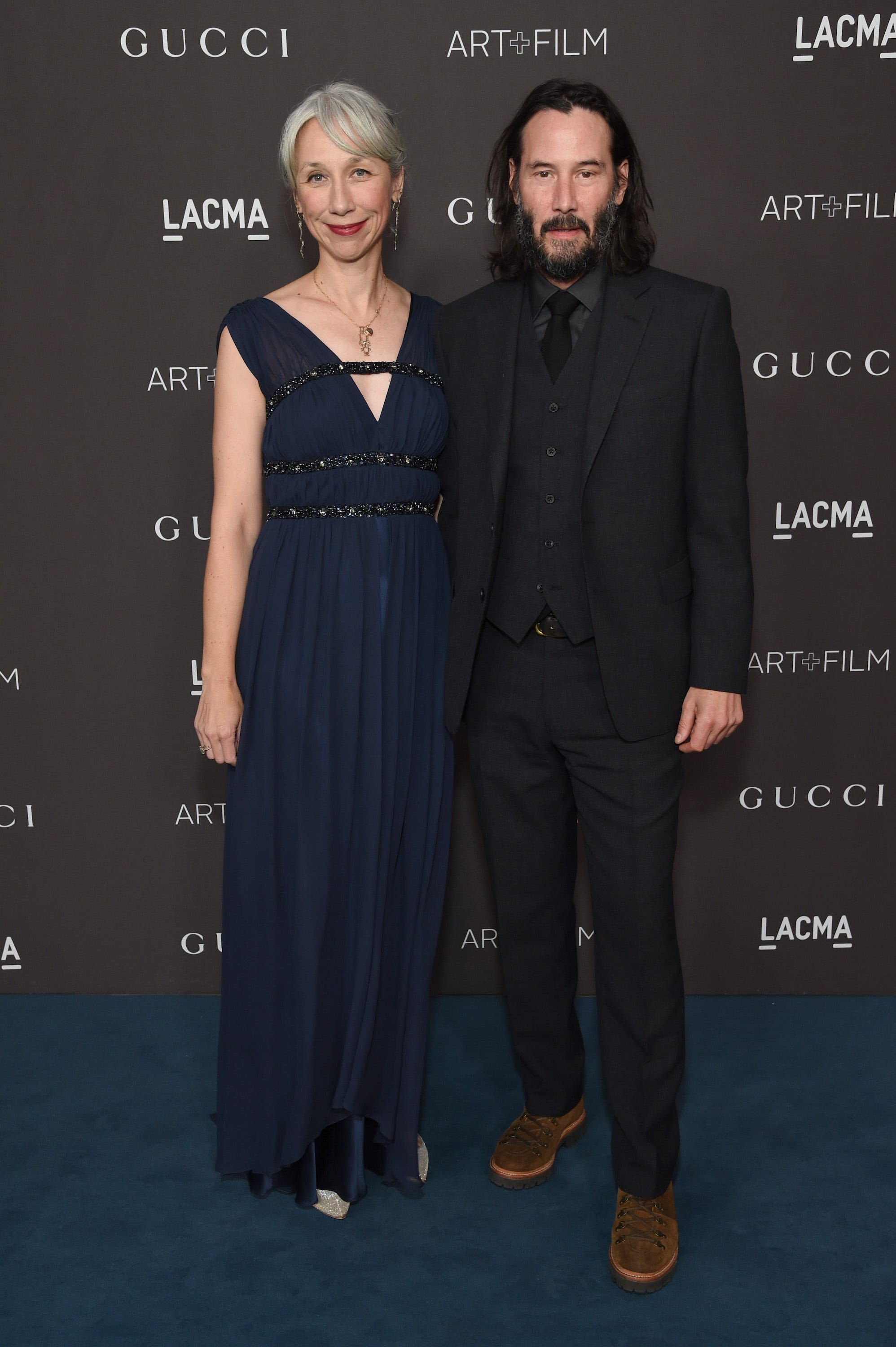 Grant dazzled in a sleeveless blue gown with sparkling bands across its bodice, and Reeves wore an all-black suit with a vest and tie. 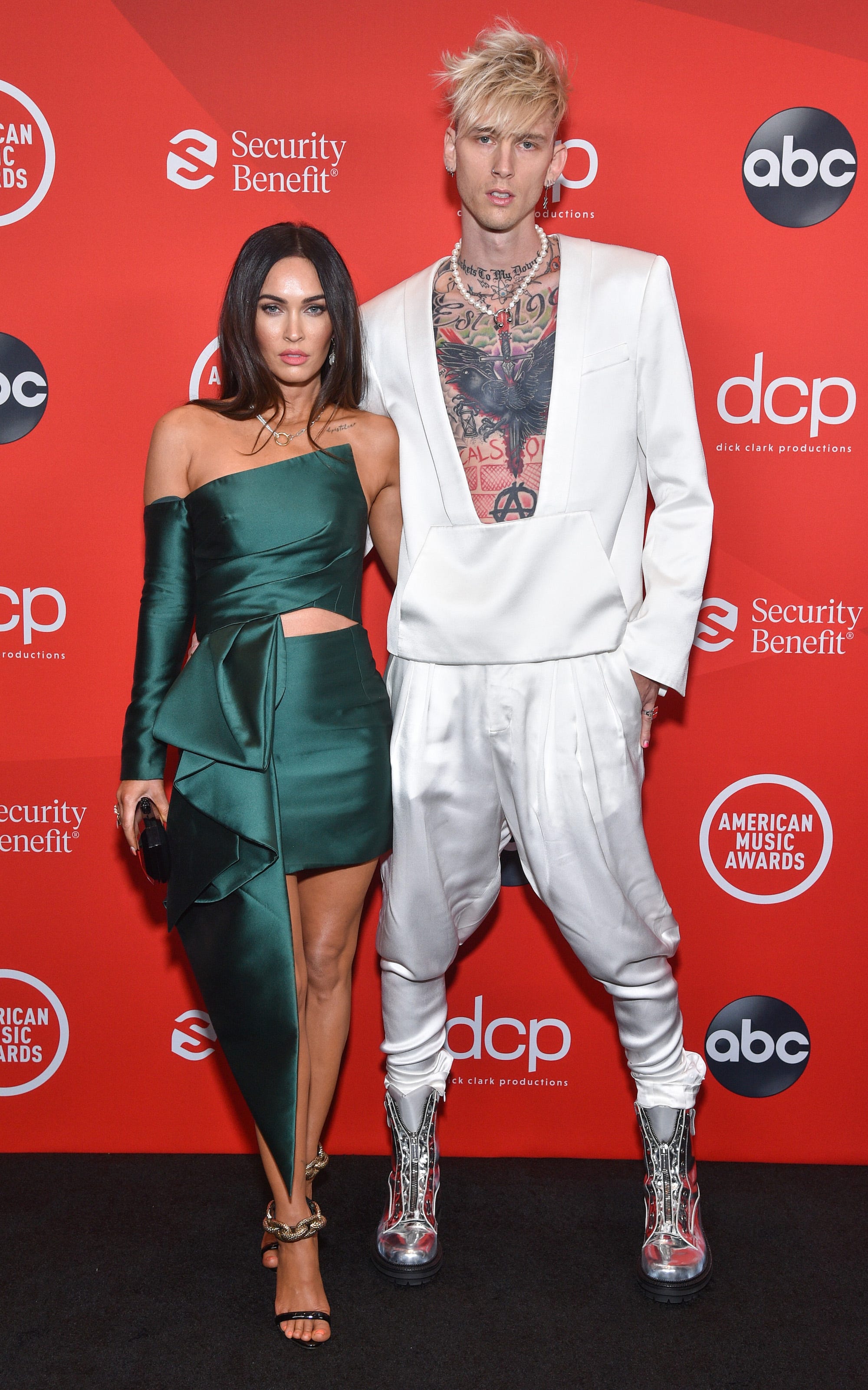 Fox chose a $US600 green miniskirt and matching $US1,800 crop top – which had an asymmetrical neckline, single sleeve, and a sliver of fabric that cascaded down to her ankles. She paired the outfit, designed by Azzi & Osta, with long earrings, a black clutch, and sandals with chain-style straps.

Kelly chose an unconventional suit from Balmain. His white blazer had a rectangular neckline that extended to a front pocket reminiscent of those seen on sweatshirts. He also wore matching parachute-style pants and silver boots.