NFTs could be the future of collecting - or a huge bubble. We talked to 3 experts about the risks to consider before buying in. 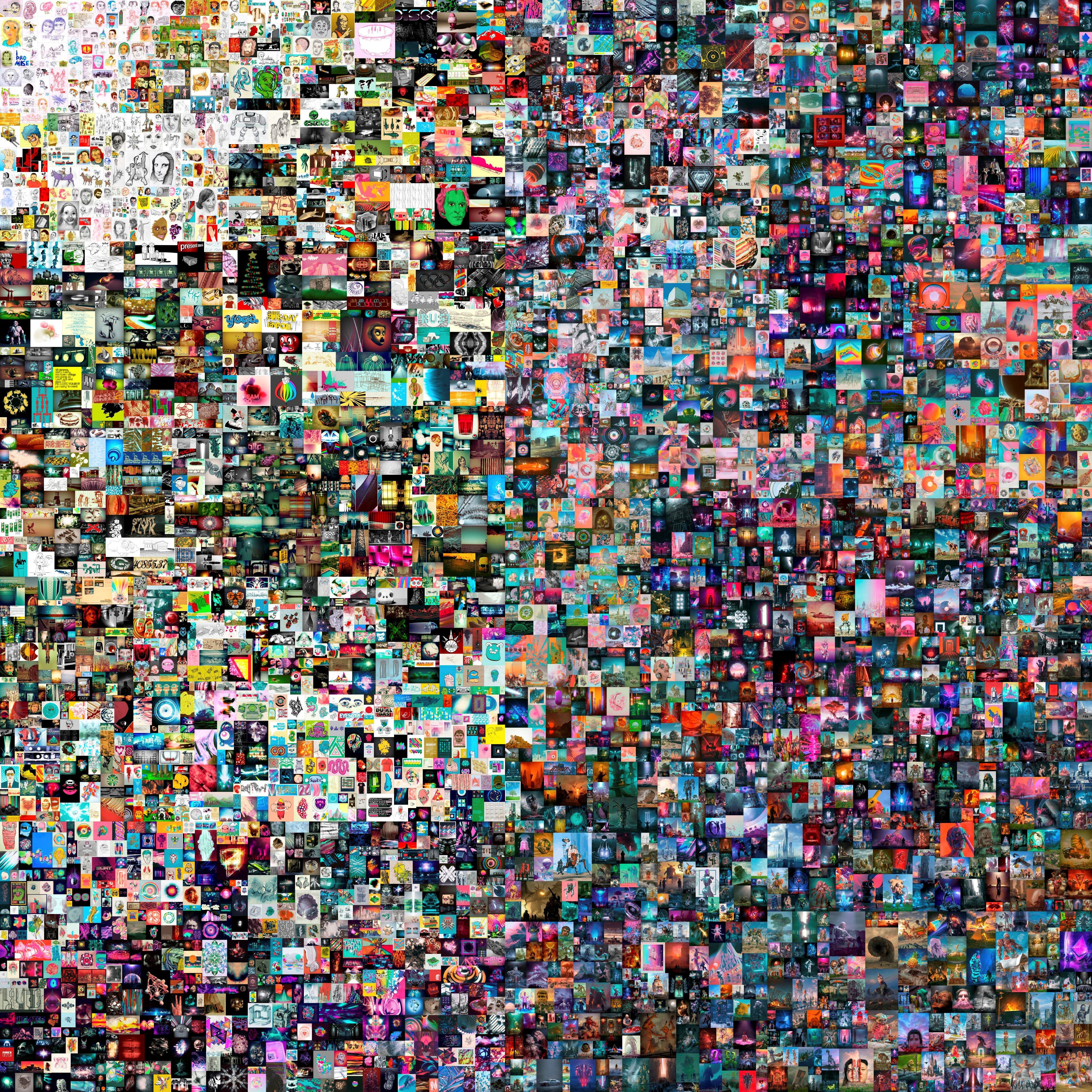 ReutersDigital artist Beeple sold his piece ‘Everydays: The First 5,000 Days’ for nearly $US70 ($90) million on Thursday.

The market for digital collectibles is booming – but that doesn’t mean they’re a safe investment.

A digital artist known as Beeple sold a piece for an eye-watering $US69 ($89) million through Christie’s on Thursday. Twitter founder and CEO Jack Dorsey is auctioning off his very first tweet, and bidding has reached $US2.5 ($3) million. And NBA Top Shot, a marketplace for officially licensed basketball highlight clips, has seen more than a quarter-billion dollars change hands over the last 30 days, minting multimillionaires along the way.

For the uninitiated, these assets are all examples of non-fungible tokens, or NFTs, which use the same blockchain technology that underpins cryptocurrencies like bitcoin to keep track of ownership and create scarcity. Purchasing an NFT typically means you have access to the same file anybody else can view or download, but you’re also granted something like a digital deed of ownership to it.

And although NFTs have been around for years, the market for them has exploded into a bonafide frenzy in recent months as mainstream companies and investors have piled in.

But for all the hype surrounding them, digital collectibles – like cryptocurrencies, stocks, or any other asset prone to speculation – come with significant risks that people would do well to understand before diving in, experts told Insider.

The top risks of the budding NFT market

For Nadya Ivanova, COO of L’Atelier BNP Paribas, an emerging-market research firm that put out a report on NFTs in February, the technology’s greatest strength is also one of its major weaknesses.

Anyone on the internet can create an NFT out of literally anything, which means there are a lot of “really bad” tokens out there, Ivanova said in an interview. It takes a trained eye to weed out what’s worth collecting or investing in.

“That applies to the physical art market as well – it’s usually a space for the knowledgeable. Same thing with NFT art,” Ivanova said. 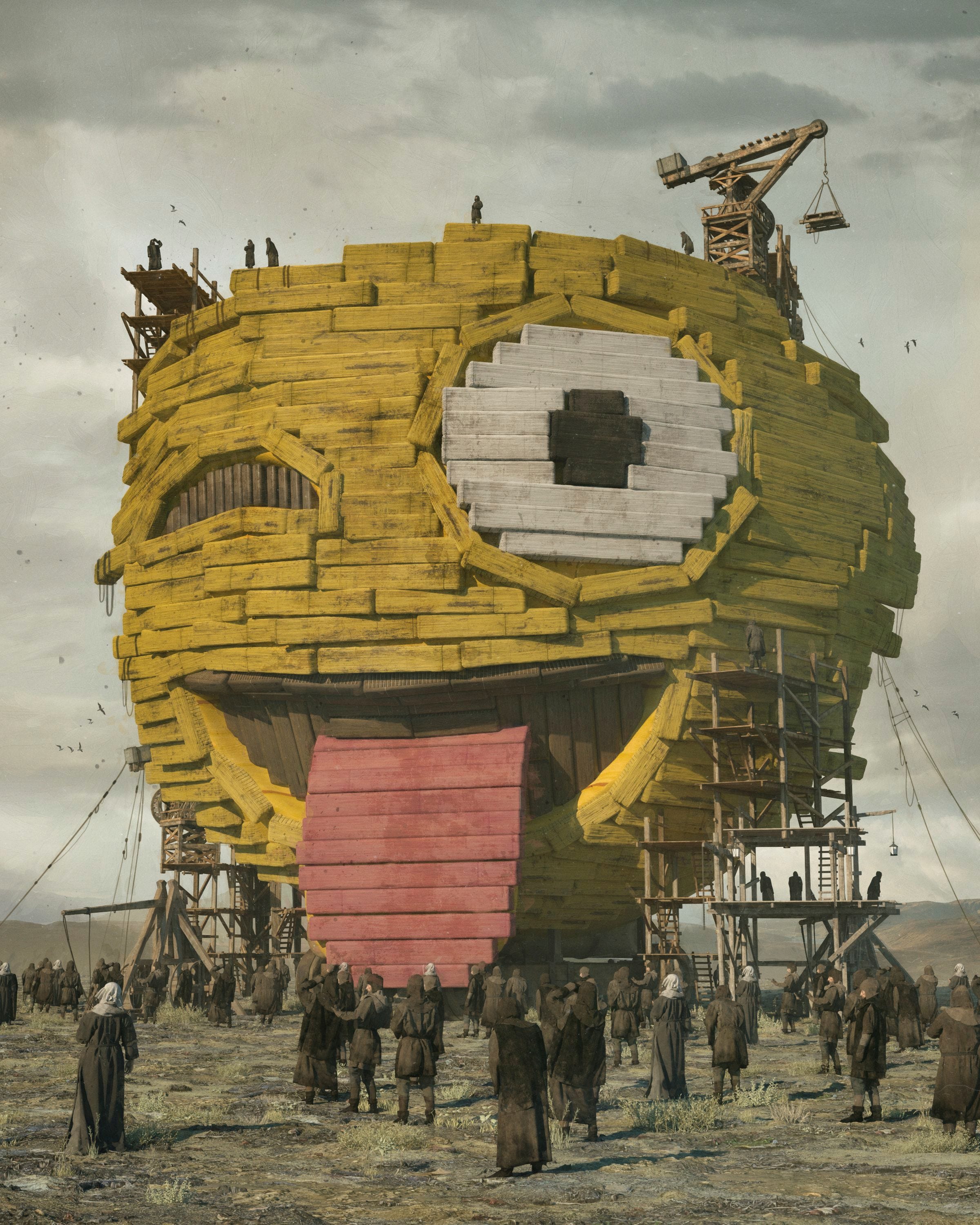 And although Ivanova sees the NFT market eventually maturing and continuing its course into the mainstream, she recognizes a handful of additional risks and uncertainties new collectors should consider about the budding space.

The NFT market suffers from massive volatility, Ivanova said, in part because there aren’t any mechanisms in place yet to help people price assets. Over the course of 2020, the value of some of the most popular types of NFTs spiked by around 2,000%, L’Atelier’s report found. On Top Shot, some highlights that initially sold for a few dollars are now worth tens of thousands.

When it comes to liquidity – how readily an asset can be exchanged for cash – NFTs are a lot more like baseball cards or paintings than bitcoin or stocks, because every seller needs to find a buyer who’s willing to pay a certain price for a particular, one-of-a-kind item. That can put collectors in a difficult spot if they, say, spent $US100,000 ($129,004) on a Top Shot moment and the market begins to tank, Ivanova said.

But illiquidity can also be a good thing, since it prevents people from making rash decisions, Andrew Steinwold, a crypto investor who started an NFT investment fund in September 2019, told Insider. If people don’t have the option to panic and offload their NFTs, the market could avoid the kind of plummeting values that would spark such a selloff in the first place, he said.

Do you really own your NFTs?

What most people new to NFTs don’t realize, according to Steinwold, is that there’s usually a distinction between the token itself – a record of ownership that lives on a blockchain – and the asset it refers to, which would be a photo, video, or audio file that’s stored separately. If a startup that issued NFTs goes out of business and stops hosting those digital artworks, basketball trading cards, or other media, buyers could be left with tokens pointing to files that no longer exist. 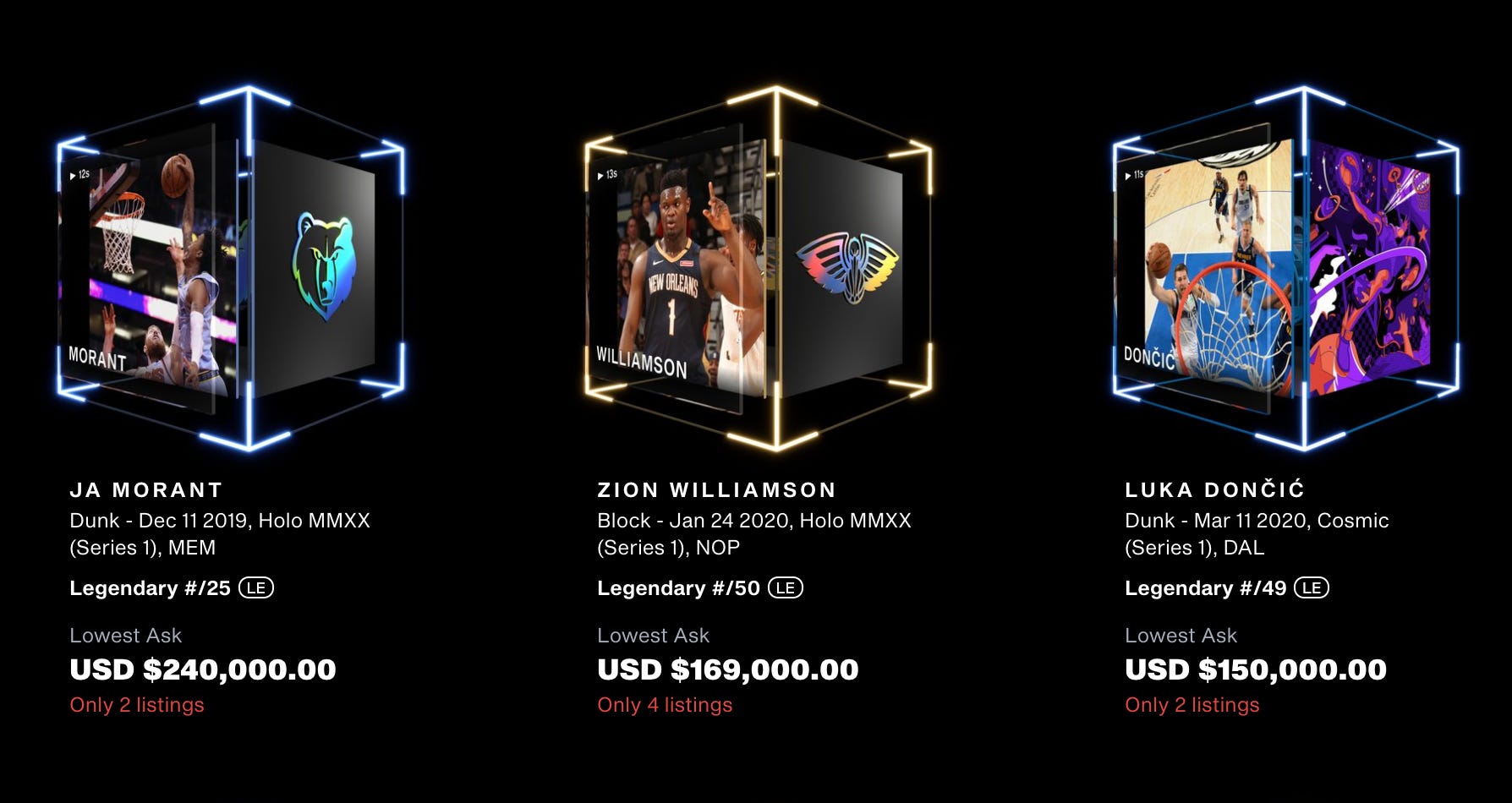 NBA Top ShotMoments go for thousands on the marketplace.

There are remedies to this problem – like storing files using decentralized services – that both Ivanova and Steinwold think will be the norm soon enough, but for now that risk remains.

To skeptics like Nicholas Weaver, a professor of computer science at UC Berkeley, the hairy nature of NFT ownership proves that the tokens have no intrinsic value and that the frenzy surrounding them is absurd.

“The ownership records themselves are the digital equivalent of Beanie Babies: cute little nothings that have no value beyond what someone else will buy them [for],” Weaver said in an email to Insider.

The potential for fraud and foul play

It’s impossible to forge an NFT and it’s easy to determine where one came from, but that doesn’t mean the market is free from foul play. Anybody can theoretically mint an NFT out of a file that doesn’t belong to them and pass it off as their own to unsuspecting buyers, Ivanova said.

Various types of manipulation prevalent in other markets also may be happening. Wash trading – when someone artificially pumps up the price of an asset by opening multiple accounts and trading with themselves – has historically been common in NFTs, she said. It’s a practice that can be easy for experienced collectors to sniff out, but might be tough for newcomers to identify. 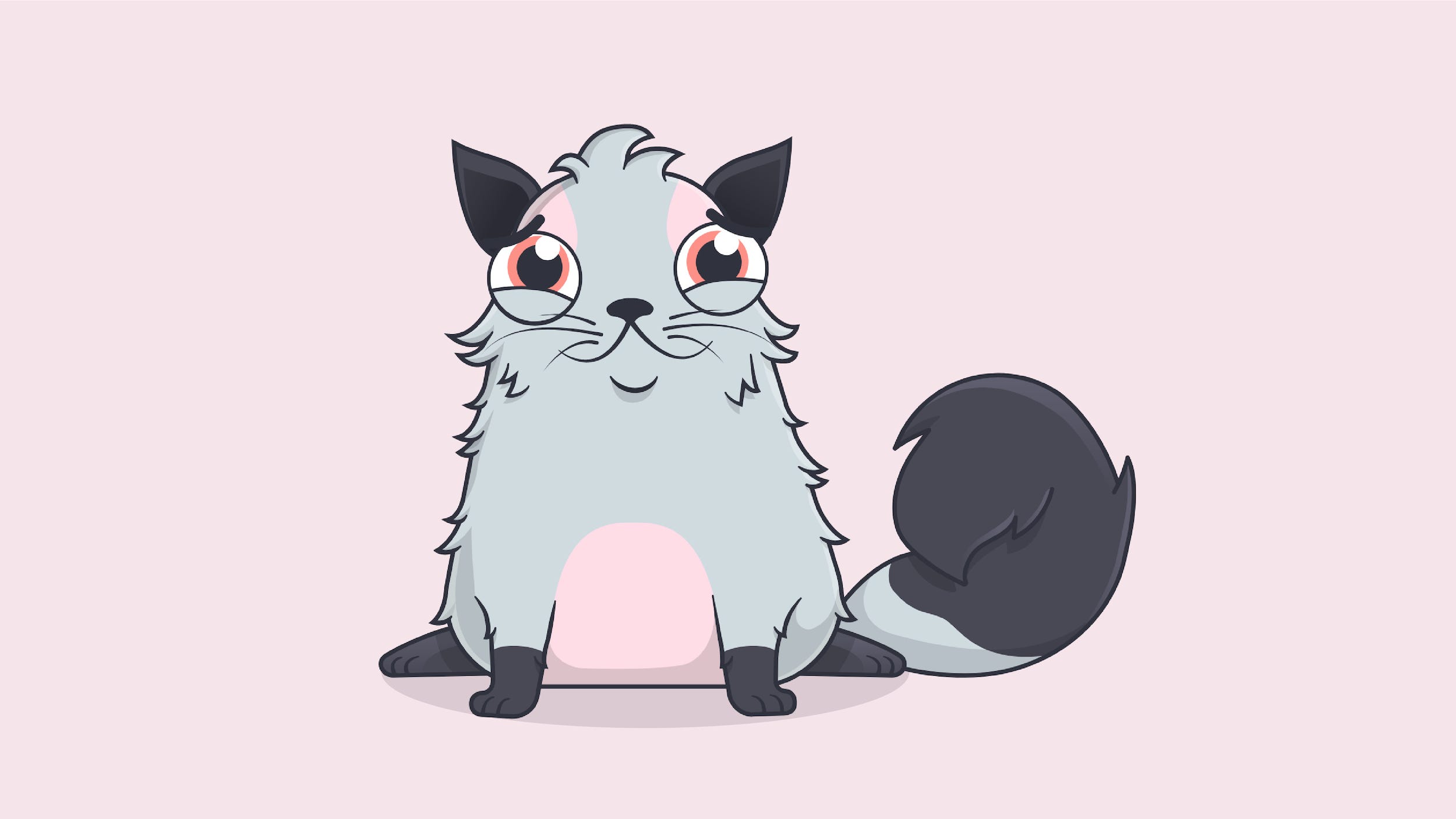 CryptoKitties, by the same company behind Top Shot, was one of the first popular versions of NFT collectibles.

And since blockchain transactions are anonymous and irreversible, if someone gets into your computer and steals your assets, you’re pretty much out of luck, according to Weaver.

From a security perspective, “‘blockchain’ is exactly the wrong solution for what you want,” he said.

Despite the uncertainties, Ivanova sees huge potential in the future of NFTs. A correction is inevitable, she said, but ultimately the market will continue to grow and NFTs may become the underlying asset for the whole virtual economy, expanding far beyond just digital art and collectibles.

Steinwold, though he thinks some people are “getting a little ahead of their skis” in these early days, predicts NFTs will eventually be a trillion-dollar market. And he should hope so – his NFT fund invests in art, collectibles, virtual land, and video game assets.

Weaver, on the other hand, thinks the current NFT fever is “pure speculative mania,” and that it’s nothing but a bubble waiting to pop.

“It is entirely a classic tulip mania but where tulips are recorded in a different media,” Weaver said. “At least with Beanie Babies they’re cute.”