What are liquid assets? A guide to the investments that are easiest to cash in, and why they're important

Patrick Foto/Getty ImagesIf you can sell an investment for the price you want at the time you want, it’s a highly liquid asset.

What makes an asset “liquid”? Liquidity basically refers to an item’s marketability. The faster you can convert something to cash â€” and the more value it retains when you sell it â€” the more liquid it is.

And what makes an asset easy to turn into cash? Strong demand. The bigger the market for something, the less trouble you’ll have selling it.

What are considered liquid assets?

Investments vary in their degree of liquidity, from those that flow like water to those that are near frozen solid. Here is a basic introduction to assets in order of their approximate but generally agreed-upon liquidity.1. Cash, bank accounts, and CDs: Cash is the most liquid asset there is. Whether by hand or by smartphone, you can transfer it in seconds.

Bank savings and checking accounts are also considered cash â€” that’s why they’re called “demand deposit accounts” â€” the funds can be withdrawn at any time.

What about a certificate of deposit (CD)? Whether it matures in three months or seven years doesn’t really matter, as long as you’re willing to pay any early withdrawal penalty it imposes. That penalty, though, makes CDs a bit less liquid than cash.

2. US Treasuries: The United States has a strong credit rating and the US dollar is the world’s leading reserve currency. So whether you’re talking about short-term bills, medium-term notes, or long-term bonds, the demand for US government-issued debt securities, aka Treasuries, is perpetually strong.

But the liquidity does depend to a large extent on the companies behind the shares, and where they’re listed. You’ll have no trouble liquidating well-known stocks with high trading volume â€” the so-called blue chips â€” on major exchanges like the New York Stock Exchange or Nasdaq, or popular ETFs from leading investment firms.

You can sell these stocks and stock funds instantly. It will take two business days after placing your transaction order (T+2) for the trade to settle and the proceeds to appear as cash in your brokerage account.

Thinly traded stocks â€” those with low trading volume or that trade over the counter â€” can be harder to unload. These stocks often represent shares in companies that have a limited or poor track record.

4. Corporate bonds: Some corporate bonds trade often, and some hardly trade at all. With this asset, much depends on the creditworthiness of the issuing company â€” as indicated by the letter-grade credit rating the bond carries.

Generally, investment-grade bonds from major, publicly traded corporations will be easy to sell. “Investment-grade” refers to the higher (A- and B-level) credit ratings.

Those with lower credit ratings, aka junk bonds, are less liquid. Due to their greater risk, they may be harder to sell, especially at your desired price.

Like stocks, the settlement period for corporate bonds is two business days.

5. Foreign currency: The market for exchanging one currency for another is huge. The foreign exchange (forex) market is a highly liquid one: It’s open 24 hours a day on weekdays worldwide, which means trades are happening almost all the time.

However, foreign currencies are most liquid during local business hours â€” when their home countries’ financial markets are active. Widely used currencies, issued by powerhouse nations with stable values are, of course, more liquid than those issued by small or economically challenged countries.

The most liquid currencies include:

6. Commodities: The liquidity of a commodity â€” a raw material or agricultural product â€” depends both on what form you hold it in and which commodity you’re talking about.

A grain elevator full of wheat, a tanker of oil, or a mound of gold bars aren’t very liquid. But a futures contract or an option on a contract (the right but not the obligation to buy or sell) representing these commodities is.

Commodities trade on their own exchanges like the Chicago Board of Trade and the New York Mercantile Exchange. These are open, albeit more specialised, marketplaces than stock exchanges.

7. Mutual funds: Although they are popular and easily purchased, mutual funds are less liquid than many other investments because they only trade once a day â€” when the market closes. In contrast, stocks and ETFs and commodity futures contracts trade constantly throughout the day, and the price is always changing. But everyone who sells shares of a mutual fund on the same day will get the same price.

Funds are required to keep a certain percentage of their holdings as cash to accommodate investors’ requests to redeem shares, but mutual funds that experience significant outflows can temporarily suspend redemptions. If that happens, you won’t be able to sell until they resume them again.

8. Municipal bonds: Municipal bonds, or munis, are debt instruments issued by local governments and nonprofits to fund projects like roads, schools, and hospitals. The bonds themselves are infrequently traded and are not considered very liquid (in fact, they faced a particular liquidity crisis in March 2020).

Rather, investors tend to buy and hold them for the triple-exempt tax-free interest they offer.

Munis can be liquid if they’re held in a bond ETF â€” in which case, like stocks and corporate bonds, have a two-day settlement period. 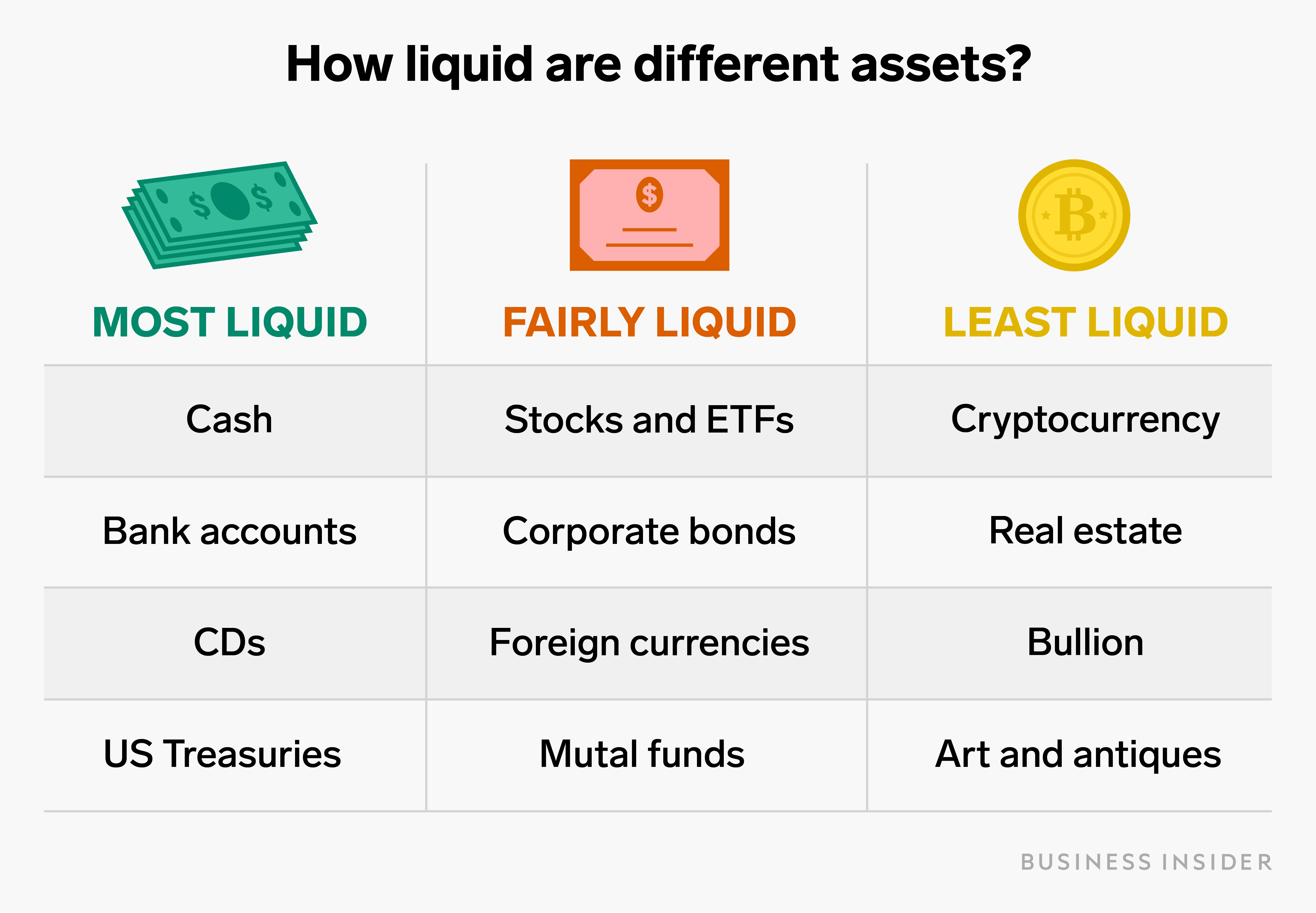 What assets are considered illiquid?

Certain assets are more challenging to buy and sell because they are unique and/or have small markets. These non-liquid or illiquid investments tend to be tangible assets â€” physical investments â€” or investments that don’t trade publicly.

A quick note on the newest kid on the investment block: cryptocurrencies (Bitcoin, tether, ethereum, et al). In a literal sense, digital money is highly liquid, and it does resemble the forex market. But the “crypto” market overall trade volume is much lower. And because the asset class hasn’t been around long (12 years) and prices can be volatile, most people still classify cryptocurrency as a highly speculative â€” and illiquid â€” investment.

Saying an asset is liquid means it is easily cashable â€” and, by extension, highly marketable. If you can sell an asset for the price you want at the time you want, it’s highly liquid.

Why is liquidity important for your finances? Well, having ready money on hand â€” if not under the mattress, then accessible in your checking and savings accounts â€” is always important, in case of emergencies or unforeseen expenses.

At the same time, you don’t want to keep too much of your money in cash: Even the highest-yield savings accounts don’t keep up with inflation, especially after taxes.

Maintaining the right amount of liquidity among your investments is a balance â€” and one of the considerations in creating a well-diversified portfolio. Ideally, you’ll have enough cash to handle a layoff or new roof without selling off assets you wanted to keep, but you won’t hold so much cash that you fall short of the investment returns you need to meet your long-term goals.

Beginner’s guide to investing in gold: The major ways to buy and trade gold, and the benefits and drawbacks of each

Penny stocks are cheap and often see massive gains, but they’re also very risky. Here’s what you should know before investing.

Bonds vs. CDs: The key differences and how to decide which income-producing option is better for you

ETFs and mutual funds can instantly diversify your portfolio, but they differ in how they’re traded, managed, and taxed. Here’s what you should know.

REITs are a way to own real estate without becoming a landlord â€” here’s how they work, how to invest, and the different kinds to invest in