When you’re buying a laptop, you may look for a model with a design that reflects your personality.

If your personality is a little off-center, you may want to check out these… things.

Some are new, some are old, and others are designed for very specific kinds of people with specific uses.

Have a look at the weirdest laptops we’ve ever seen.

Let's begin with one of the more reserved specimens in this list. The MSI GT80 Titan is the first laptop that comes with a full mechanical keyboard. It also has TWO incredibly powerful graphics cards, which will handle anything you throw at it for the next decade. The GT80 laptop goes for more than $3000, which isn't surprising in the slightest. Now that the pleasantries are out of the way, let's turn the heat up and go full psycho with this absurd monstrosity, the Asus ROG GX800 gaming laptop. That growth sticking out of its behind is a liquid cooling system, which is completely insane. It cools down the components inside the gaming laptop when you're playing just too damn hard. It's actually a regular laptop that works fine without the liquid-cool dock, but the graphics cards don't work at 100% without the dock because they're so powerful and can easily overheat.

It, too, has two graphics cards. Except the GX800 uses Nvidia's latest GTX 1080 graphics cards, which are just as powerful as those you'd find on a full-size desktop. Here's how it works: Liquid is pumped through internal piping to collect heat from the processor and graphics cards. The hot liquid travels to the radiators in the dock where the heat is deposited, and the heat is blow away by fans. You can even attach a powerful antenna to maximise your online gaming. Then there's this laptop from Acer called the Predator 21X, which has a mechanical keyboard, two graphics cards, and... It's the first laptop to feature a curved screen. And it's absolutely huge. The Dragonfly Futurfön sounds cool, and looks like any old tablet/laptop hybrid.

But it can transform into a DOUBLE laptop, with one screen running Windows and the other running Android. It's a 3-in-1 device all for $800, but it's still in development after a successful Indiegogo campaign in 2014.

Next, we have this funky-looking Steampunk laptop. That's right. It's a laptop. See! It actually looks like a piece of gorgeous Victorian furniture. This thing is absolutely stunning. There was a time you could buy laptops from the craftsman, who would use laptops parts and build the beautiful wooden cases, but he only sells accessories now. Datamancer
This is the second model. The first model needed a key to turn on the laptop.

Check out the crazy and unique keyboards and mice on the craftman's website.

Let's cool things down a bit with this laptop called the 'Floral Kiss,' by Fujitsu. It had design elements that the company thought would appeal to women, like a pearly power button and fake diamonds on the Caps Lock key. Fujitsu
This is, unbelievably, not a joke.

And it was designed so that women can open the lid without the risk of damaging their nails. This continues to not be a joke.

But the promo video gets even more offensive. It shows how the 'Floral Kiss' is perfect for women who just want to shop for handbags online. Because that's all women do with computers... right?

Apparently this is how Fujitsu thinks women use computers. 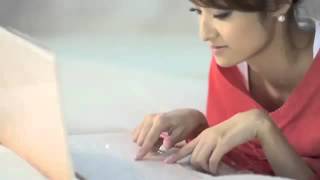 Let's check out the opposite of the 'Floral Kiss.' Here's the most chunky, rugged laptop ever to crush the Earth. The Getac B300-X Toughbook looks like it fell out of the sky and killed the dinosaurs. This particular model is being sold on eBay for just under $1,800.

It has a handle, so you can carry it into battle. And, like any machine that's also a weapon, it runs Windows 10. ohlipcon/eBay
If it could grow a beard and wear Oakleys, it'd be easily mistaken for a Navy SEAL.

Here's another chunky beast from Getac, that's actually a mobile server with a screen. That means you can carry around an abridged version of 'the internet' in five hard drives wherever you go. Getac
Regular laptops may have one or two hard drives, max. Not this bad boy.

Next up is the Surface Pro 4, that many of us have seen before -- but it's not the laptop I want to show you. Behold. The Acme Portable 'Sherlock 4:4.' It's a portable 'forensics workstation,' so it's not really a laptop or a hybrid. But, like the Surface Pro 4, all the important parts are in the screen. That's where the similarities end. Acme describes the Sherlock as 'incredibly compact' and 'portable' at 27.5 lbs. Most laptops weigh under 4 lbs, but I suppose it IS as powerful as about eight Surface Pro 4s. Who knows how much this thing costs; you have to contact the company to get a quote. I'm still waiting to hear back.