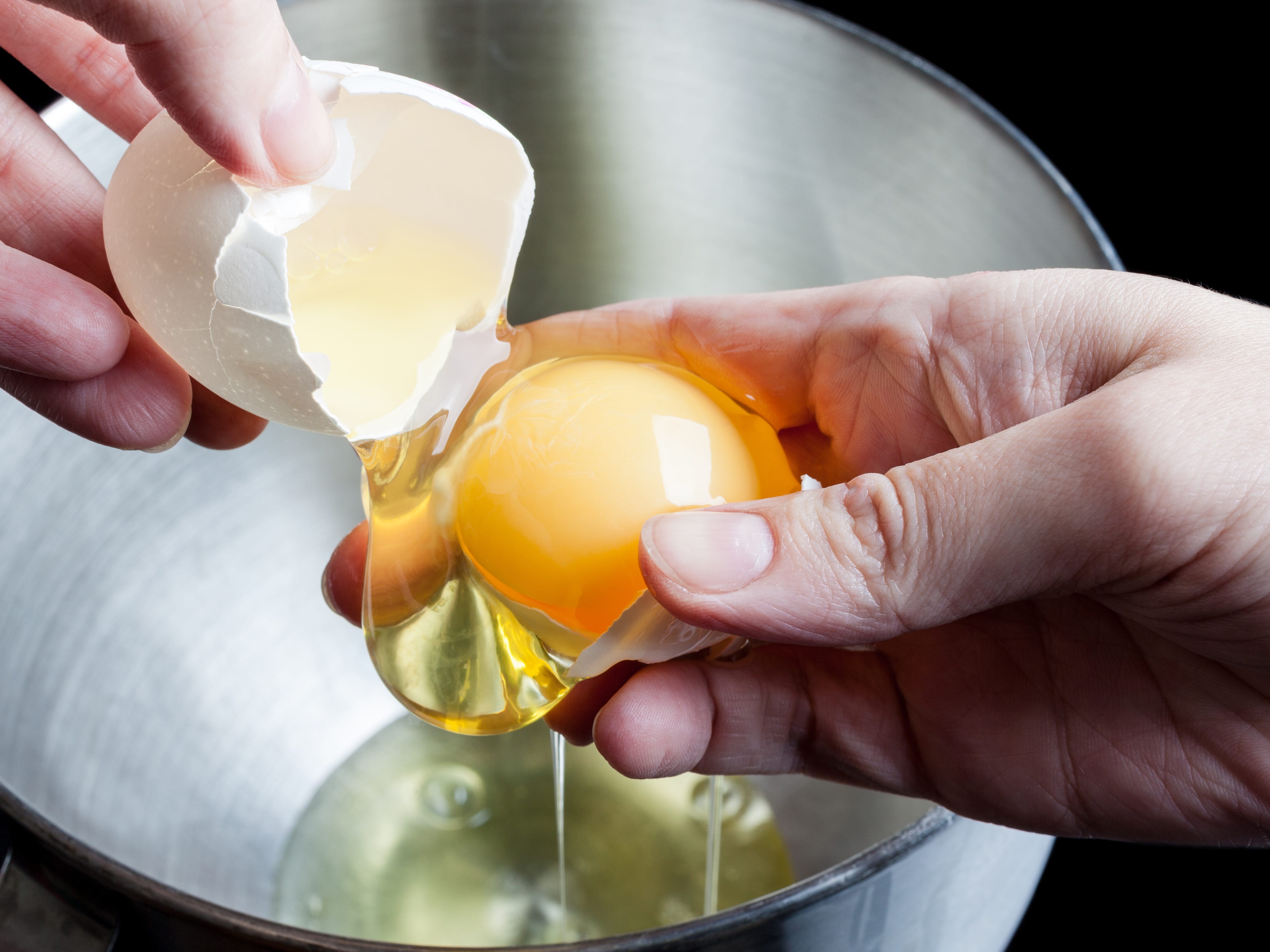 ShutterstockThere are a lot of things you might believe about eggs that aren’t true.

Whether you scramble them, fry them, or add them to your favorite recipes, eggs are pretty ubiquitous.

Despite their ubiquity, there are a lot of misconceptions when it comes to the consumption, appearance, safety, and nutritional value of these edible ovals.

Read on for some common myths about eggs (specifically ones from chickens) that have been debunked.

MYTH: Raw eggs are a better source of protein than cooked ones

Consuming raw eggs seems to work for fictional boxers and self-absorbed cartoon villains, but the fact is that gulping down uncooked yolks is risky and not particularly great for helping you get a protein boost.

For starters, you are more likely to get salmonella, a type of infection that can sometimes make individuals seriously ill, from eating raw eggs.

Plus, raw eggs aren’t a richer source of protein than cooked ones. Your body actually absorbs almost double the protein from cooked eggs than it does from raw ones.

MYTH: All eggs must be refrigerated

This can depend on where you are in the world. For example, in a British supermarket, you probably won’t find eggs in the fridge but in a US grocery store, you will.

According to The New York Times, in the US, egg producers with a certain amount of chickens are generally required to wash their eggs in an attempt to keep illness-causing salmonella at bay.

The washing process involves soaps and enzymes that can remove part of an egg’s protective cuticle designed to keep the egg safe from bacteria. Keeping these washed eggs chilled helps keep bacteria at bay, so in the US they are stored in fridges.

But in many places around the world, such as the United Kingdom, washing eggs is prohibited for a few reasons, including a belief that careless washing procedures may do more harm than good and the egg’s cuticle (since it hasn’t been washed off) can keep bacteria at bay, per Forbes. Since the shells are not compromised through washing, refrigeration is optional.

That said, once an egg is refrigerated you should keep it chilled and not leave it out for more than two hours, per the United Egg Producers association. If you leave a cold egg at room temperature for too long, it can sweat and facilitate the growth of potentially harmful bacteria or even mold. 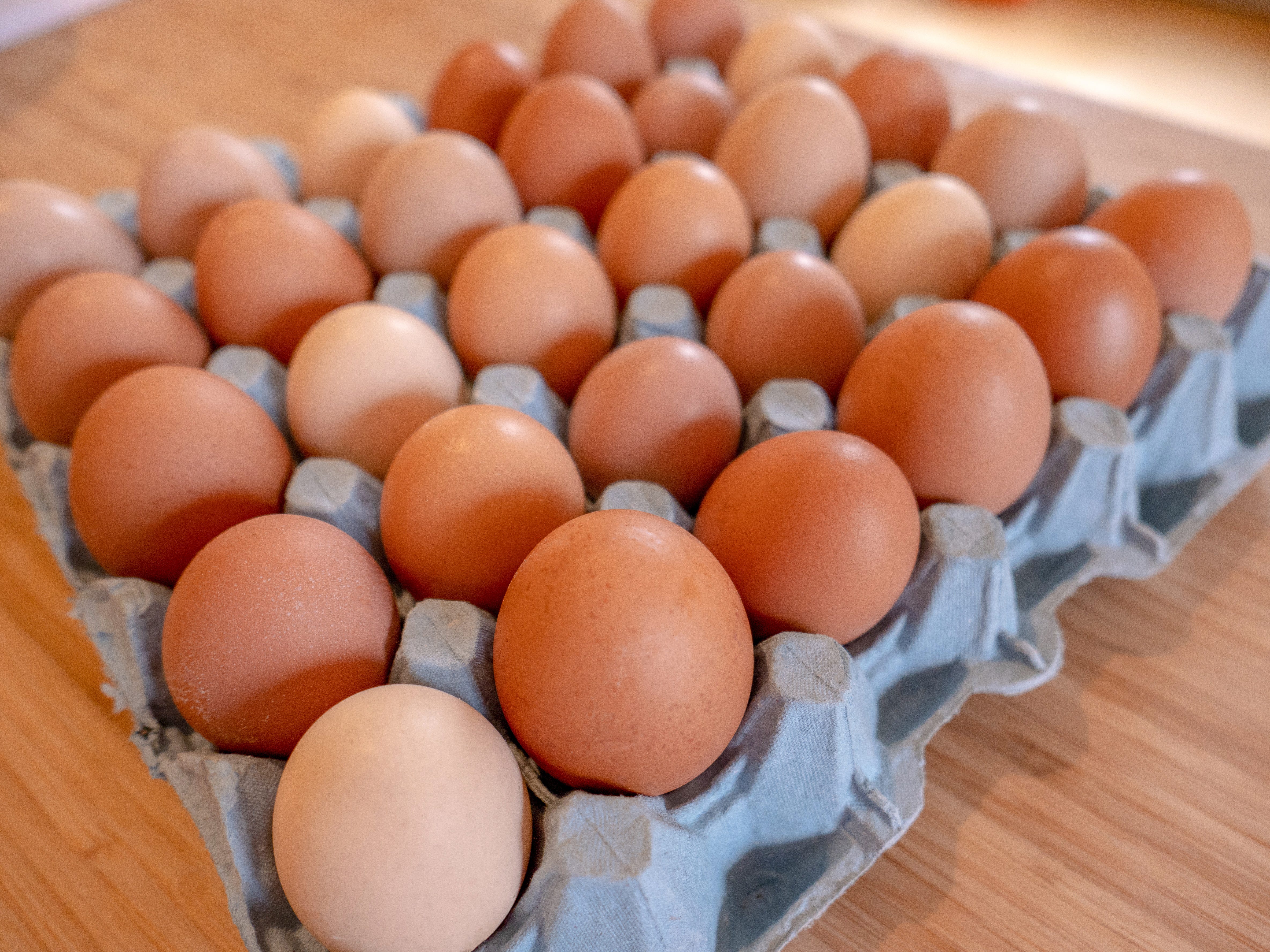 The color of an egg has no bearing on how it will taste or how many nutrients it will deliver to the eater, so no need to discriminate.

MYTH: Accidentally eating a small piece of eggshell is dangerous

Crunching down on a bit of eggshell in your omelet or cupcake can be entirely unpleasant … but that’s about all it is.

Consuming an eggshell isn’t known to be dangerous, though eating a large piece of it may potentially injure your esophagus or throat, per Healthline.

That said, you’ll want to avoid eating uncooked eggshells as, like with raw eggs, they can be contaminated with certain bacteria that can cause illnesses like salmonella.

MYTH: Blood spots in eggs are a sign of fertilization

Nope – a small dot of blood on your egg yolk isn’t a sign that your egg was fertilized and would have someday hatched into a chicken.

These red spots are typically a sign of a ruptured blood vessel that might’ve occurred when the egg was being formed inside of a hen. These spots are uncommon and can also be caused by a hen’s genetics or vitamin-A deficiency.

Fortunately, per the USDA, this blood spot doesn’t mean an egg is unsafe to eat, just make sure you’re properly cooking it.

MYTH: It’s never safe to eat eggs past the sell-by date stamped on the carton

Most cartons in grocery stores have a sell-by date stamped on them and although you should purchase eggs before their sell-by date, that’s not the exact moment your eggs will go bad.

The carton also has a pack date, which is a three-digit number that can help you figure out how fresh your eggs really are. These numbers are written as Julian dates, meaning cartons with “001” were packed on January 1, and containers marked “365” were packed on December 31.

Typically, if they’ve been stored in the refrigerator, your eggs will be safe to eat for an additional four to five weeks after the pack date, though they may not taste as fresh. That said, if an egg has a sulfuric or rotten sort of smell, toss it.

If you really want to make sure an egg is OK to eat, you can test it by dropping it in a glass of room-temperature water. A fairly fresh egg will sink. If it floats to the top, it’s likely gone bad.

MYTH: The little white string attached to some egg yolks should be removed before you cook them 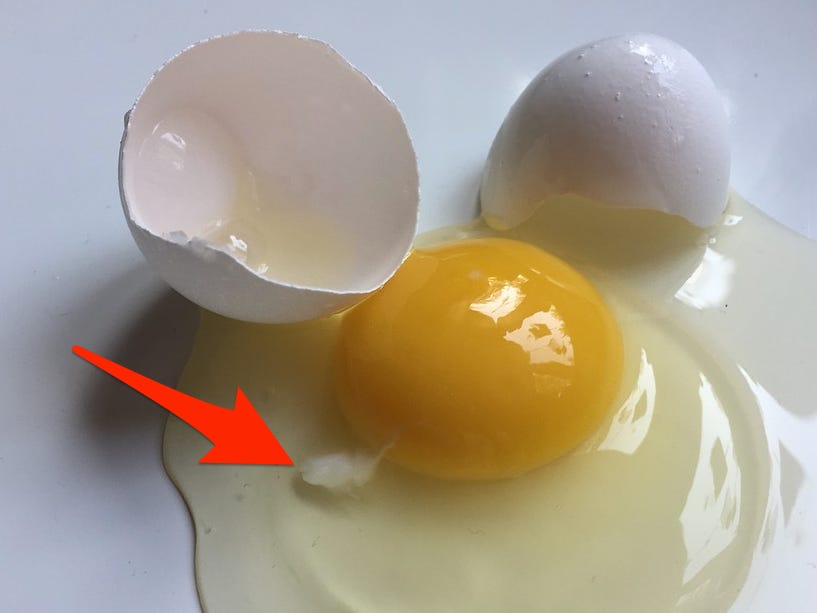 PixabayYou don’t have to take that little white thing out of your egg if you don’t want to.

Sometimes when you crack an egg you might notice a small, white, string-like thing attached to its yolk. These white strands are called “chalazae” and they help hold a yolk in place, keeping it in the center of the egg.

Removing them from an egg before you cook it is entirely optional.

Like an egg yolk, these strings considered safe to eat when cooked properly. Plus, if you leave them on your eggs, they generally won’t impact the way your food turns out.

This can be true, but it isn’t always the case. Some of the biggest variables that help to determine how big a chicken’s eggs will be are the animal’s age and diet. Typically, older chickens lay larger eggs.

Other variables that help determine the size of a chicken’s eggs can also include the animal’s weight, environment (hens that feel crowded often produce smaller eggs), and its breed.

8 foods that have more protein than an egg

8 signs your carton of eggs has gone bad

5 hacks for cracking an egg perfectly every time