20 ways you're probably shortening the lifespan of common foods 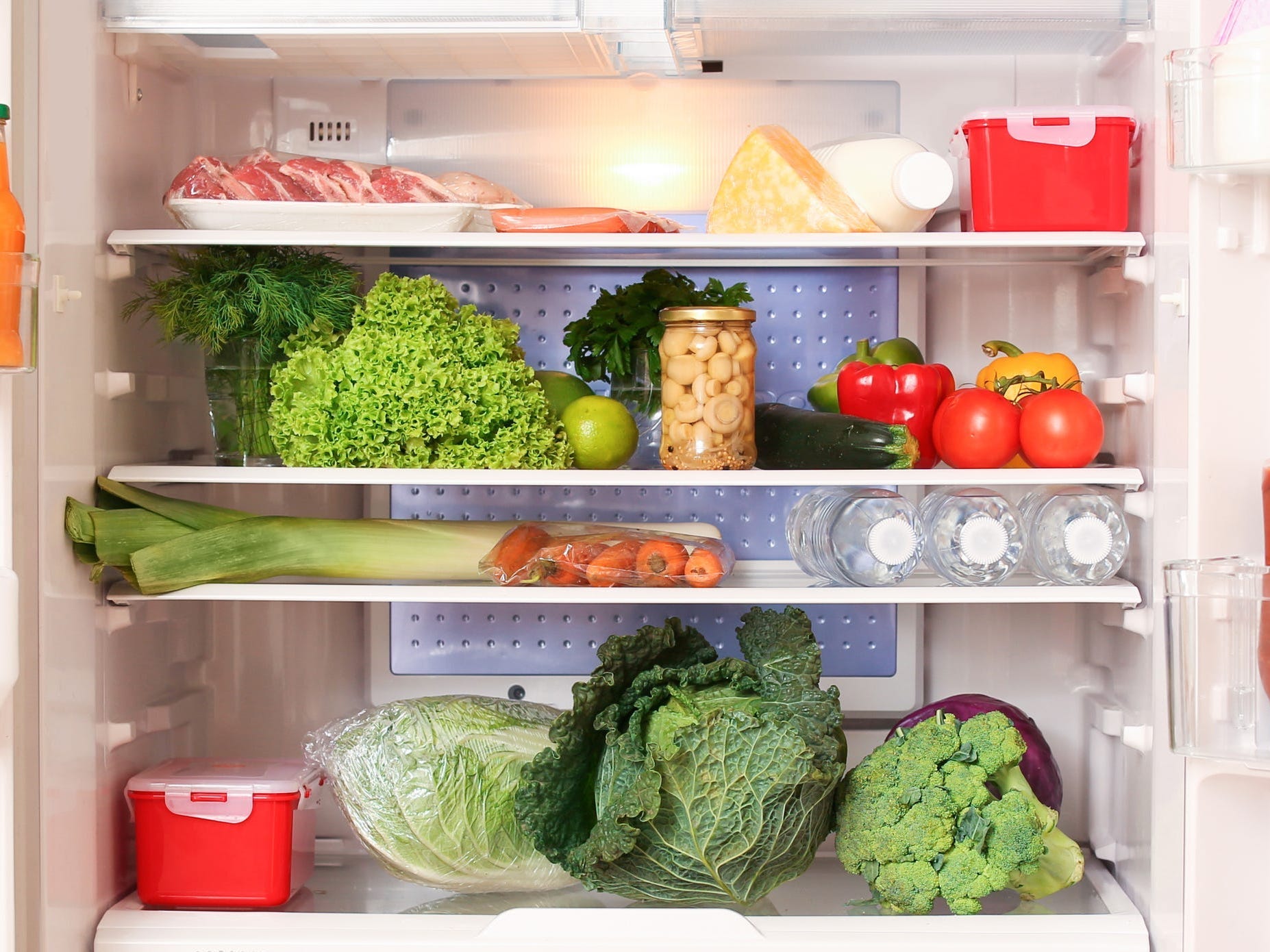 Throwing out food that’s gone bad can be upsetting considering the money and resources that went into it. Fortunately, food waste can be avoided with the right know-how.

Read on for common mistakes people make when storing their food, along with tips for making groceries last longer.

If you store your eggs outside of their carton, they may be going bad more quickly than you’d like. iStockStore eggs in the fridge in their original carton.

Though you may see cute bowls of exposed eggs or open cartons on Instagram, it’s best to keep eggs in their original containers if you want them to have a long shelf life, according to Clare Langan, San Francisco-based chef and culinary consultant.

If you live in the US, it’s also important to store eggs in the fridge, according to Janilyn Hutchings, a certified food-safety professional at State Food Safety.

“If you let eggs stay out, condensation could form on the shells and make them more vulnerable to bacteria,” Hutchings told Insider.

According to the New York Times, most US egg producers are required to wash their eggs with soaps and enzymes that weaken the shell’s protective cuticle. This makes the egg more susceptible to bacteria, so it’s necessary to keep it refrigerated.

However, in other places around the world, like the UK, it isn’t as common or necessary to keep eggs in the fridge.

In countries like the UK, such egg washing is prohibited, making refrigeration unnecessary. But once an egg is stored in the fridge, whether at the store or in your home, it should stay there.

Blocks of cheese sometimes won’t last long in the packaging they came in. 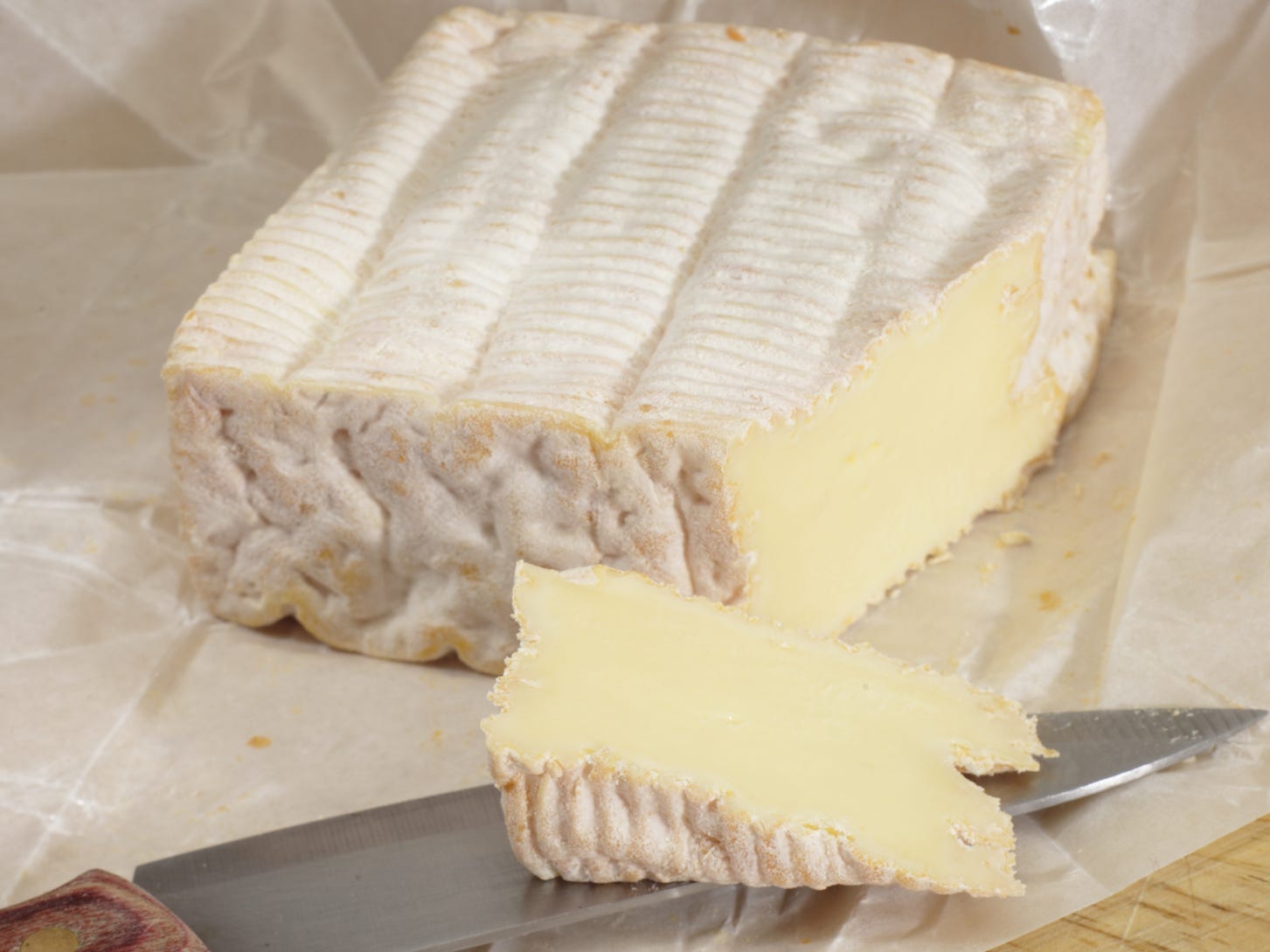 The best way to go about storing cheese is by removing it from the plastic wrap it came in, according to Megan Wong, a registered dietitian at AlgaeCal. Instead, specialty cheese paper will garner the best results.

“I always recommend cheese paper as a way to store cheese when it is available to my customers,” Chris Roelli, master cheesemaker at Roelli Cheese Haus, told Insider.

Another option is to use a clingy plastic wrap, according to Roelli. Make sure to wrap the cheese in it tightly and then place the block inside a resealable bag in the fridge.

Bread can go stale in the fridge. 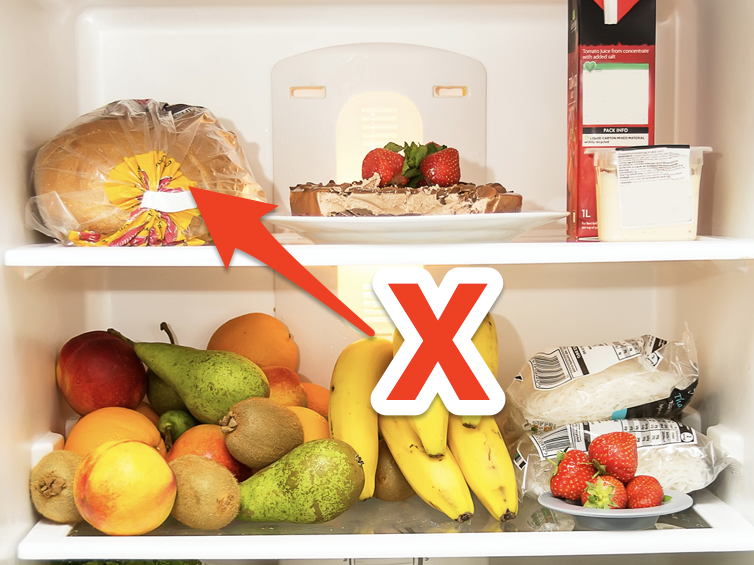 STANZI/ShutterstockBread should be stored on the counter or in the freezer.

If you regularly put your bread in the fridge, you’ve probably been causing it to go stale much faster than it would at room temperature, according to Wong.

“The best place to store bread is on the counter,” she told Insider. “But if you aren’t able to finish it before it starts going stale, keep it in the freezer.”

Placing all of your fruit in the same basket can lead to over-ripening. 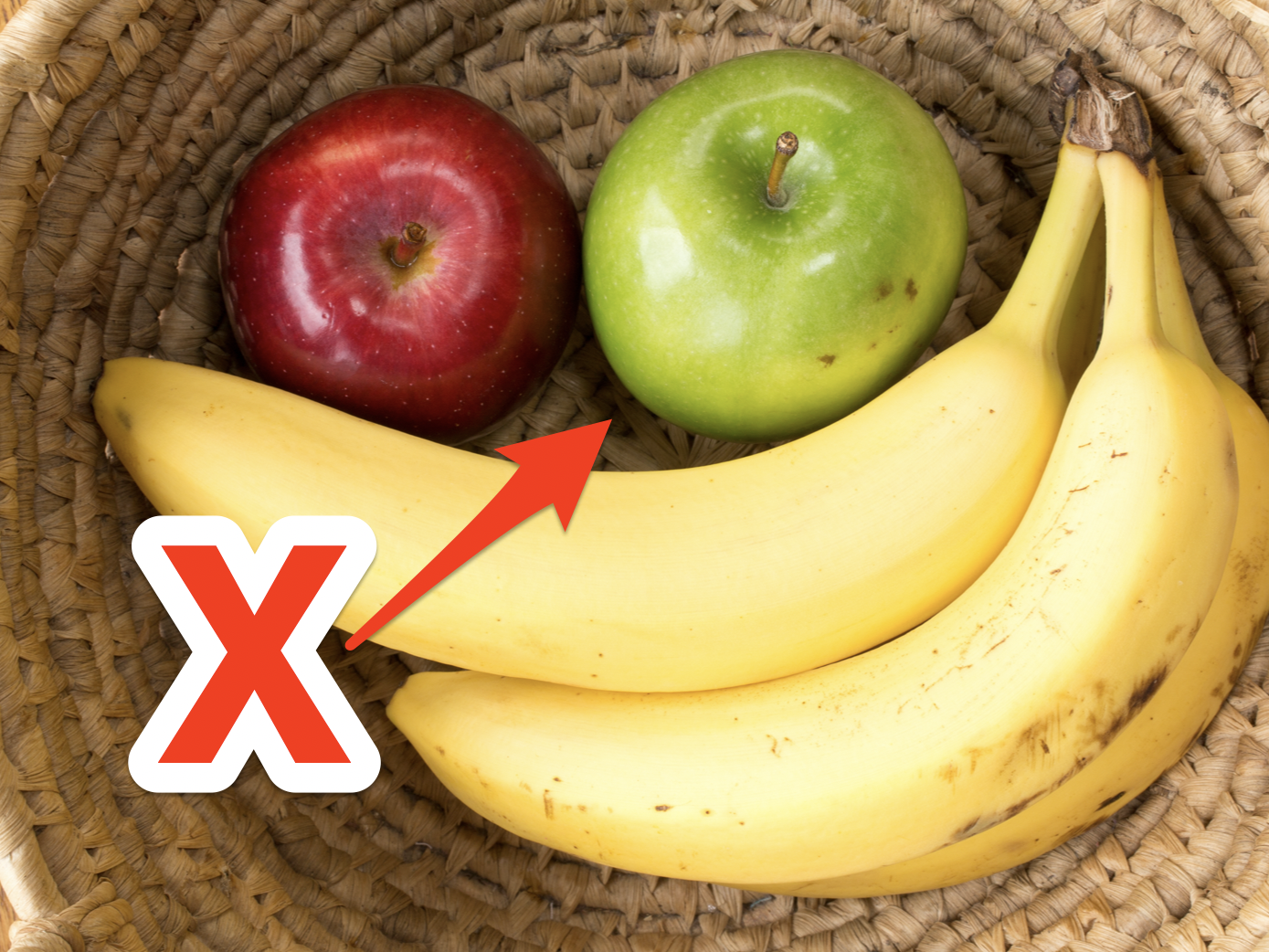 Edward Fielding/ShutterstockApples and bananas shouldn’t be stored together.

One issue with putting all of your fruit in the same basket is that some fruits produce ethylene gas, Wong said, which speeds up the ripening process.

Instead, keep produce like bananas, apples, pears, and tomatoes apart from each other when possible.

Butter can absorb the odours of strong-smelling foods. 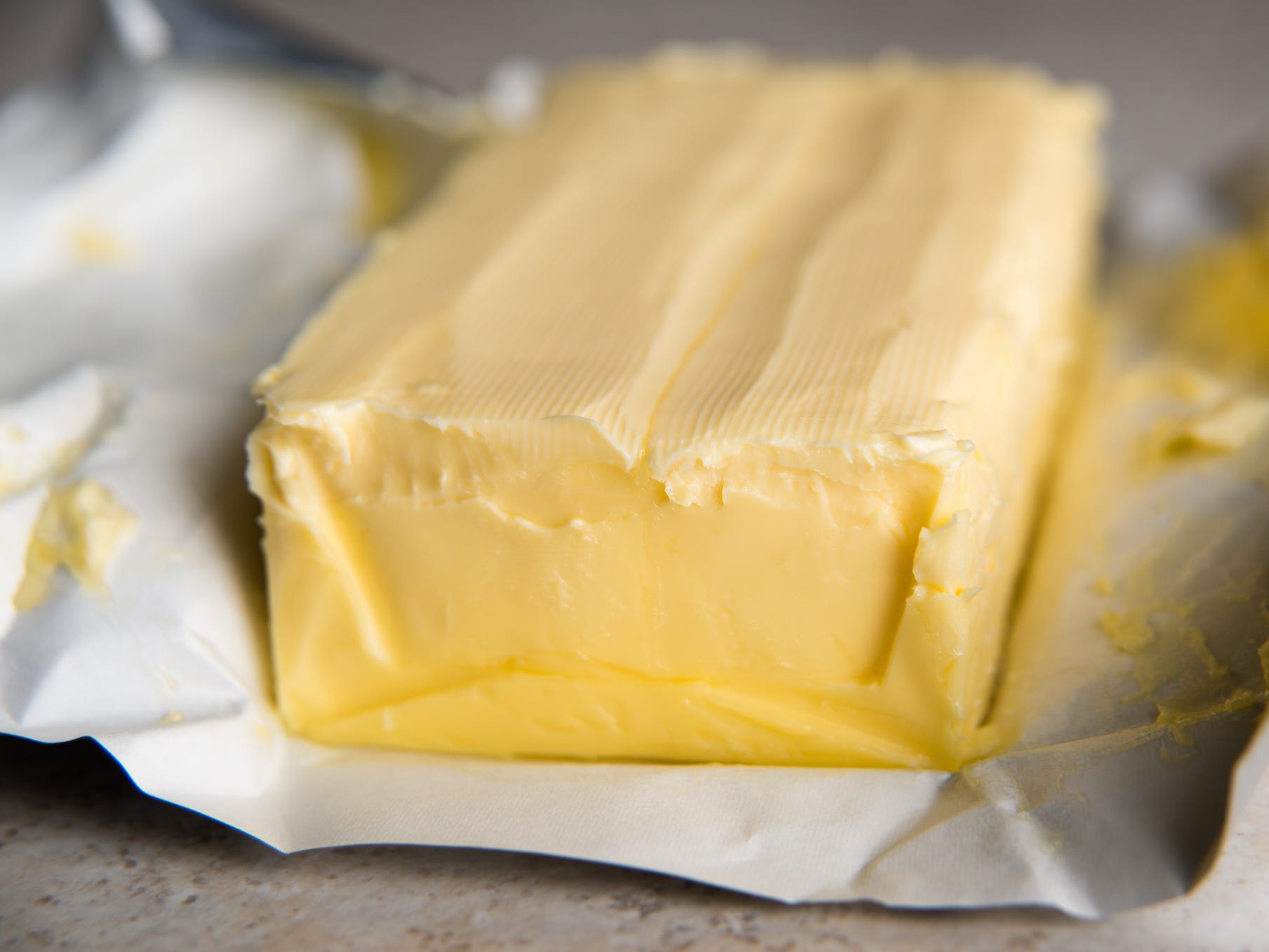 ShutterstockButter can take on the smells of pungent foods.

Putting your butter in the fridge is fine, but it’s important to keep it away from strong-smelling foods since it has a tendency to absorb other aromas, according to Langan.

“If you aren’t going to use your butter within a couple weeks, store it in the freezer,” she told Insider.

Don’t keep your onions and potatoes together. 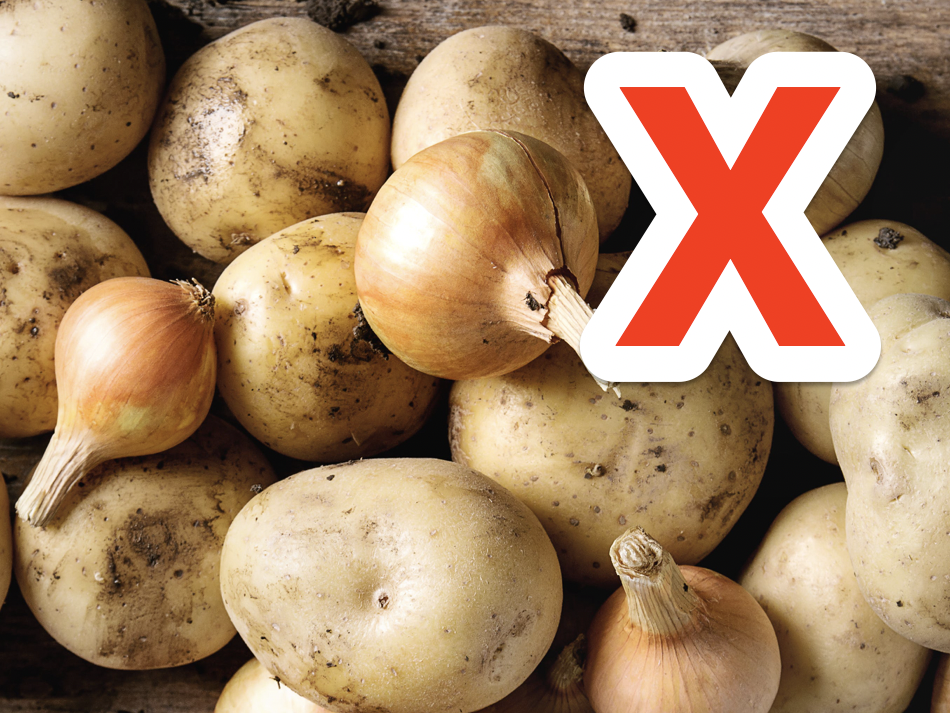 Natasha Breen/ ShutterstockThe gasses from the onions can cause the potatoes to sprout.

If you’ve been storing your potatoes near your onions, you might notice your potatoes are sprouting more quickly, according to Lynell Ross,certified health and wellness coach and food-safety-certified nutritionist.

“The best way to store potatoes for the longest life is in a dark, cool, dry yet well-ventilated container like a crate or bin with holes,” Ross told Insider.

Unpeeled, uncut onions should also be kept out of the refrigerator, which can cause them to soften and change flavour, she explained.

Instead, store them on your countertop in the light or in the pantry away from potatoes.

Storing your leafy greens in the plastic bags they came in can lead to wilting. 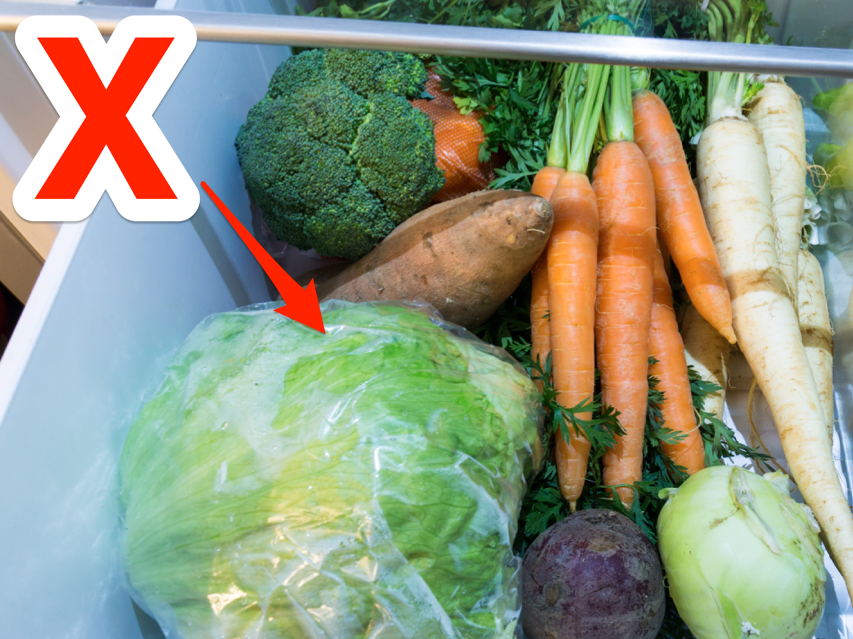 ShutterstockSalad greens can be stored in paper towels.

If you store your leafy, green vegetables in the plastic bags they came in from the supermarket, they will go bad very quickly, according to Ross.

Instead, she said, she suggests washing and drying the greens before wrapping them in paper towels and keeping them in the crisper drawer or in glass food-storage containers.

You shouldn’t stick your fresh herbs directly in the fridge. 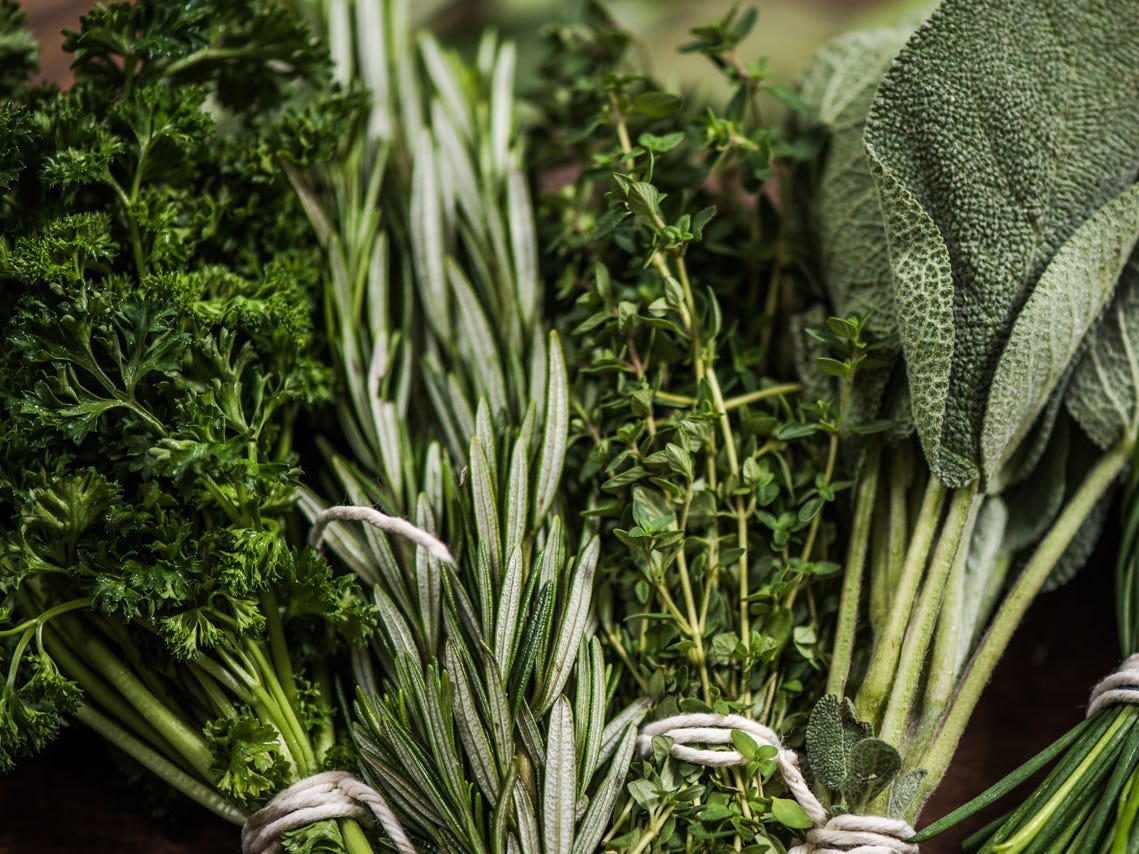 A common mistake when storing fresh herbs is placing them in the fridge right after bringing them home from the store, according to Wong. This can cause the herbs to dry out and brown due to the overexposure to oxygen.

It’s best to wash your herbs thoroughly, as dirt and bacteria can speed up the decay, Wong said. Just be sure to dry them completely before storing them.

“After they’re clean and dry, trim the ends of these herbs and put them in a jar with a few inches of cool water,” she told Insider. “Cover the jar with a plastic bag to keep them moist and prevent discoloration and change the water every few days.”

Keeping your brown sugar in its original packaging can cause it to harden. kunmom/ShutterstockBrown sugar should be stored in an airtight container.

Storing your brown sugar in the bag or box it came in is a big mistake, according to Wong, as it can cause it to harden.

“Instead, keep it in an airtight container in a cool, moist area,” she told Insider. “You can try adding a slice of bread, apples, or even marshmallows to keep the brown sugar moist and clump-free.”

Fresh berries shouldn’t stay piled up inside their containers. 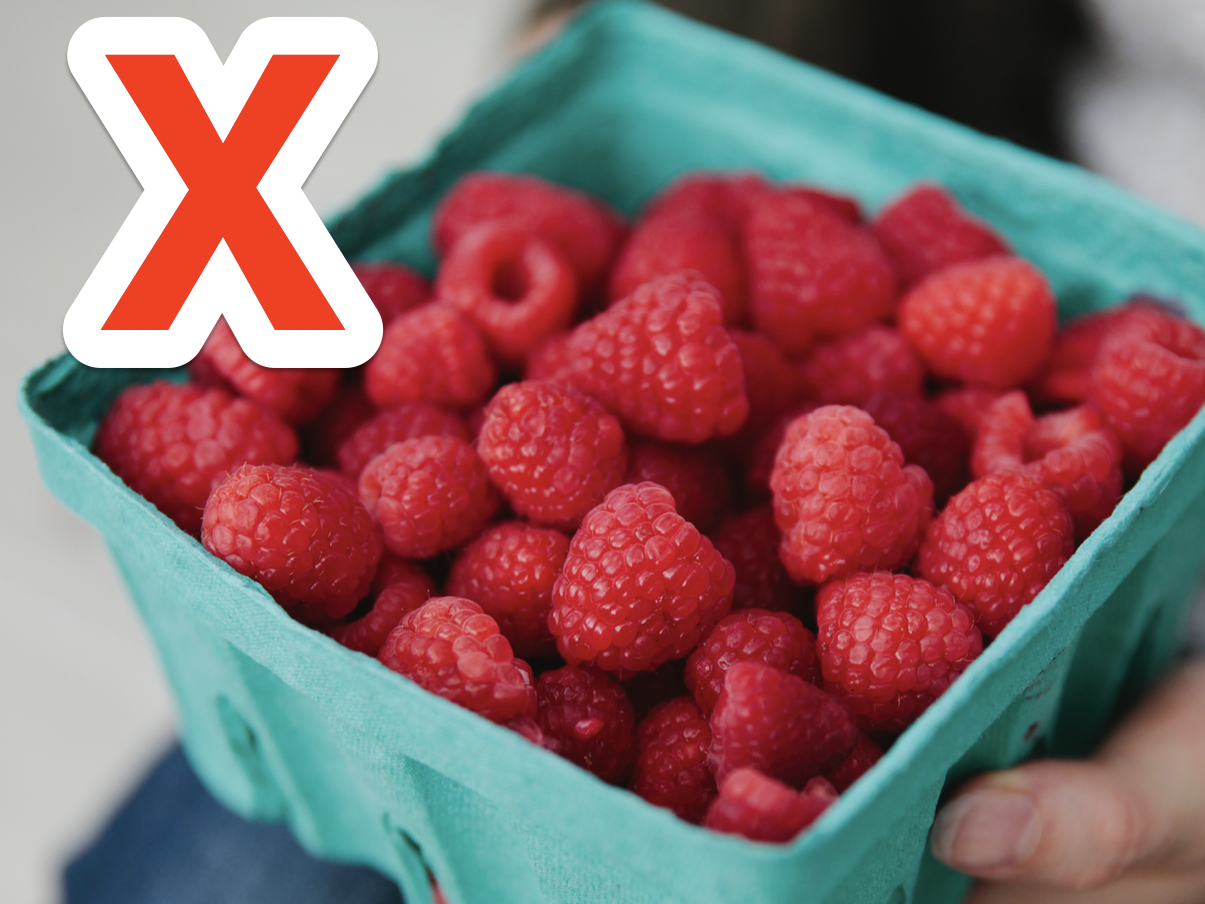 Katie Haller/ShutterstockBerries should be washed and dried before storing.

When it comes to storing berries, it’s imperative to avoid stacking them, according to Wong.

“Store them in a wider container to avoid stacking, allowing moisture to evaporate,” she told Insider. “Place a dry towel on top to absorb extra moisture and prevent moulding.”

Also avoid placing berries on the counter, as they will mould a lot faster, according to Ross.

Tomatoes don’t belong in the fridge. 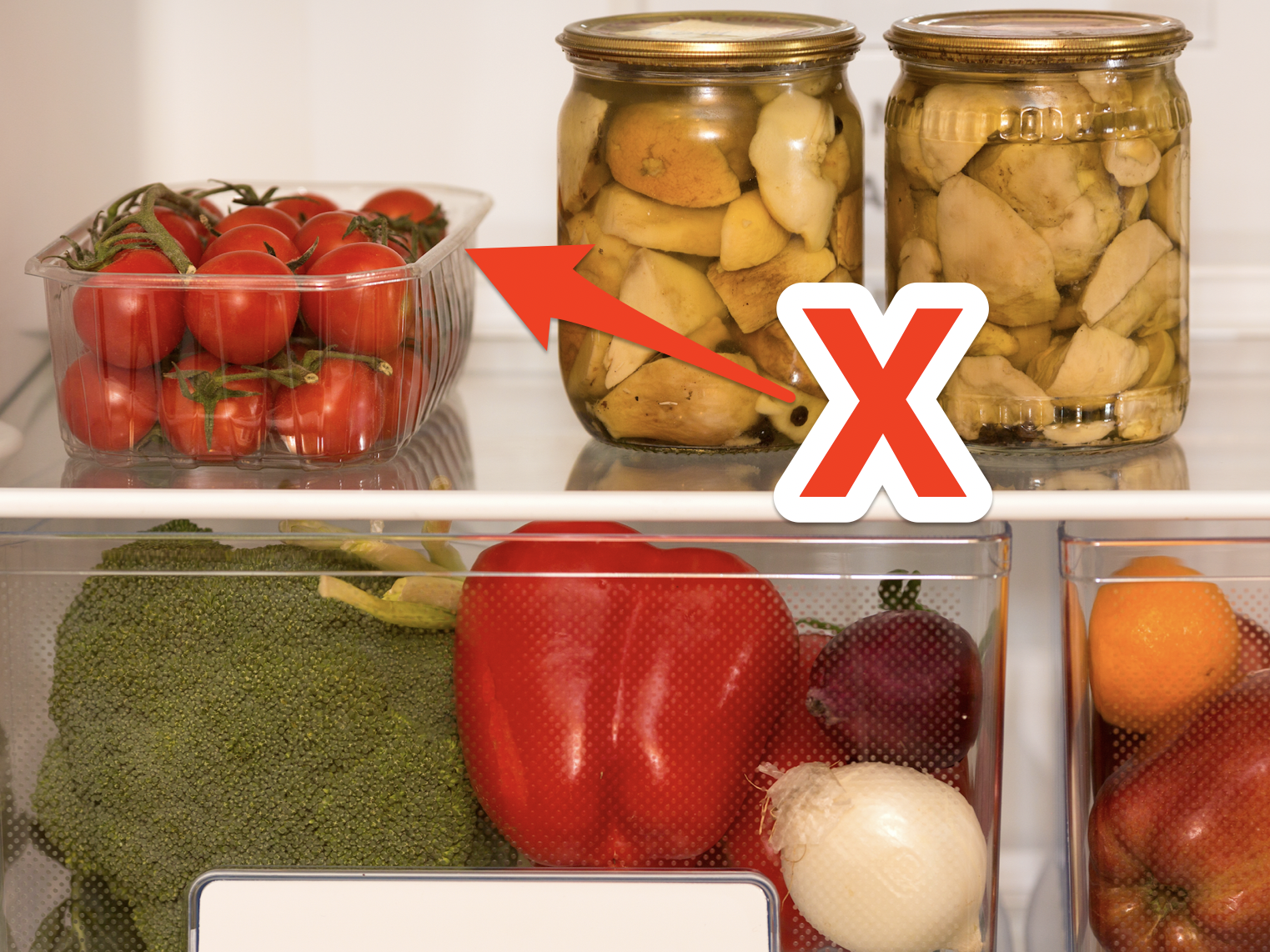 Okssi/ShutterstockTomatoes can be stored on the counter.

Storing tomatoes in the fridge will affect the ripening process and the flavour, according to Wong. Instead, place tomatoes on the counter away from sunlight and in a single layer.

If your tomatoes are overripe, that’s when you can think about putting them in the fridge. 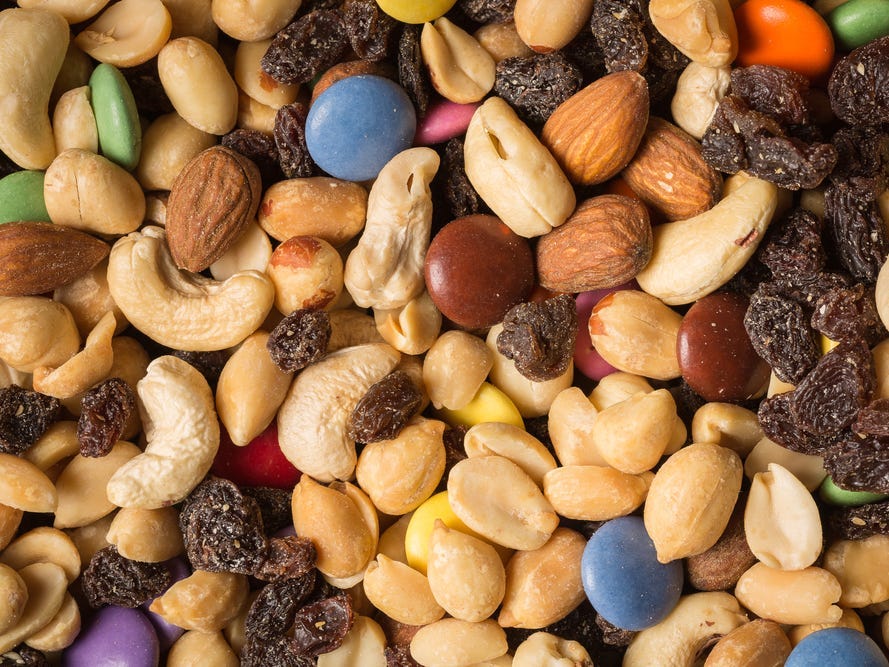 CookiesForDevo/ShutterstockThe oil in nuts and seeds can cause them to spoil quicker at room temperature.

“These healthy snacks turn rancid when you store them in the pantry for too long,” Ross told Insider. “Nuts and seeds contain oil which spoils if kept at room temperature for more than two to three months.”

If you buy nuts and seeds in bulk, Ross said you should store them in the freezer.

When you want some, pull out smaller quantities to keep in storage containers in the fridge – away from things like garlic as nuts can take on the flavours of things around them.

The freezer door isn’t the best place for ice cream. 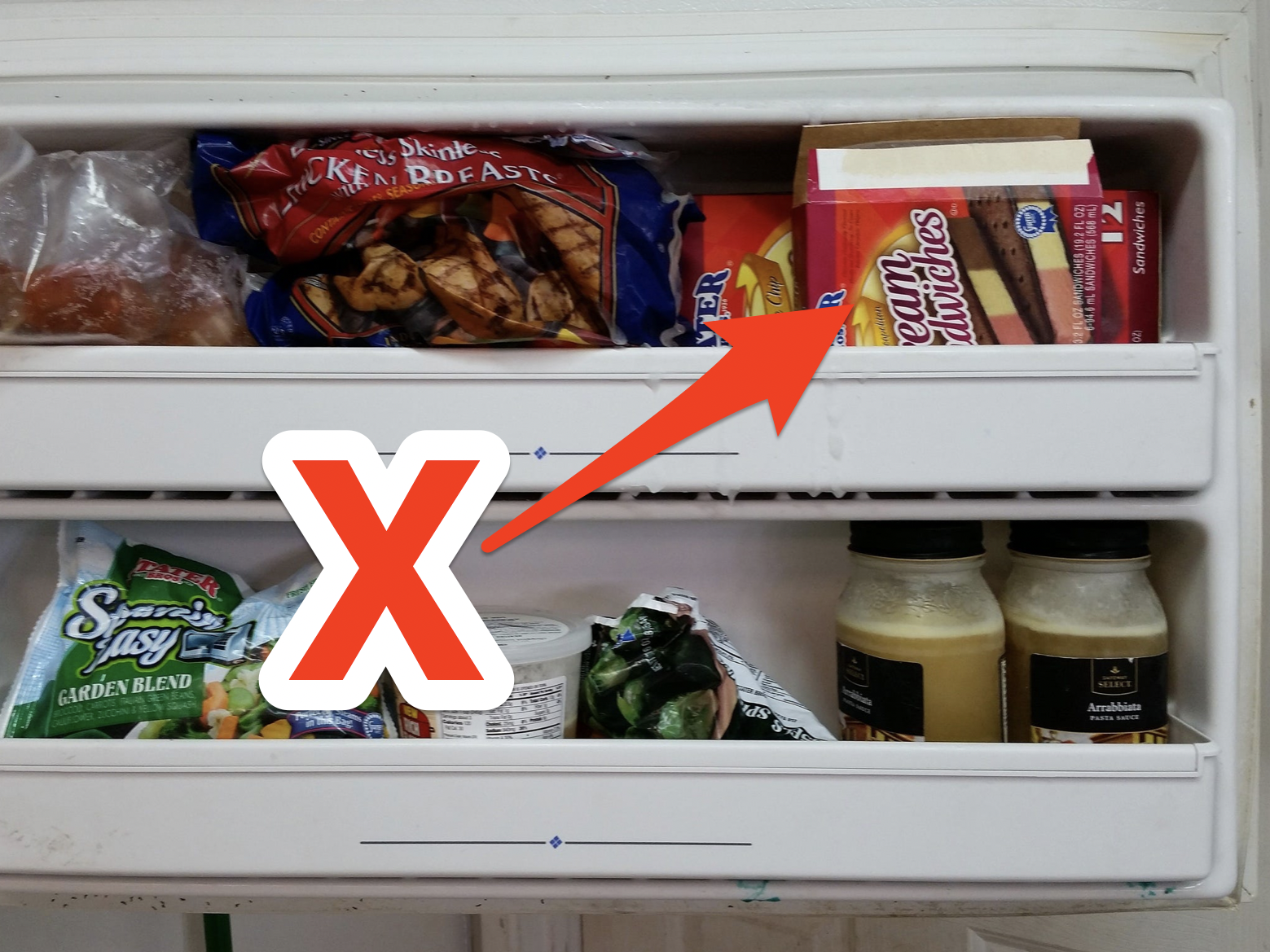 If you want to enjoy your ice cream for longer, don’t put it in the freezer door because that’s where the temperature will fluctuate the most, according to Wong.

Instead, place your ice cream in the back of your freezer, so there is less of a chance of it melting and refreezing.

Opened packages of cereal, chips, and crackers shouldn’t go back in the pantry. ShutterstockOpen bags of chips should be sealed in a zipped bag.

“The worst thing you can do to your cereals, chips, and crackers is to put opened packages back in the pantry without sealing them back up tightly,” Ross told Insider. “Moisture will seep in, ruining them overnight.”

For best storage practices, put the rest of these kinds of snacks into a resealable bag, squeeze out the air, and then place them back in the pantry.

Whole melons can lose flavour in the fridge. 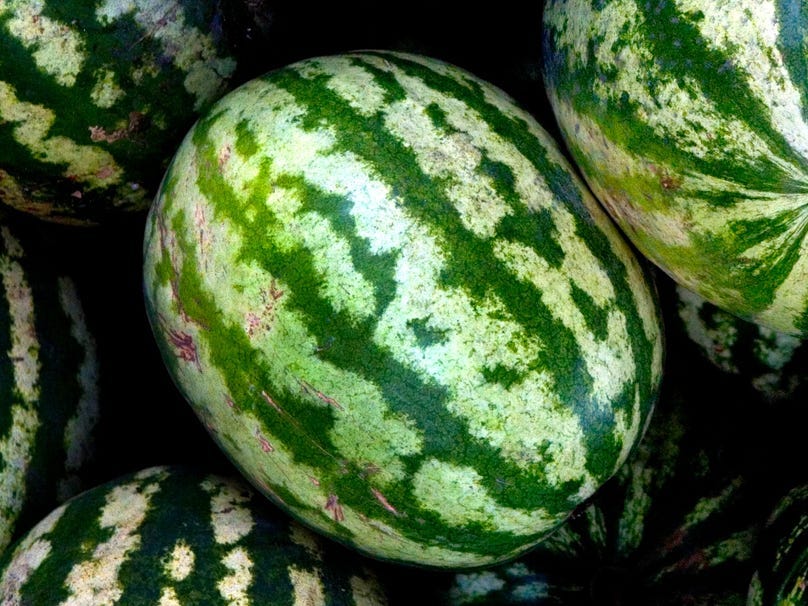 By putting your melon in the fridge before cutting into it, you will ruin the flavour and texture, according to Ross.

“To maintain the best flavour, melons should be kept on the counter at room temperature until ripe,” she told Insider. “Then once cut, they should be stored in the refrigerator.”

Cut fruit, however, shouldn’t stay on the counter for too long. After you’ve cut up your fruit, it’s essential to put it in the fridge soon after, according to Hutchings.

When fruit is cut, it becomes a TCS food, which is food that requires time and temperature control for safety. This just means that it’s more susceptible to bacterial growth, Hutchings explained.

If cut fruit is left out of the fridge for four hours or more, it should be thrown away.

Raw meats and ready-to-eat foods shouldn’t be stored near each other. 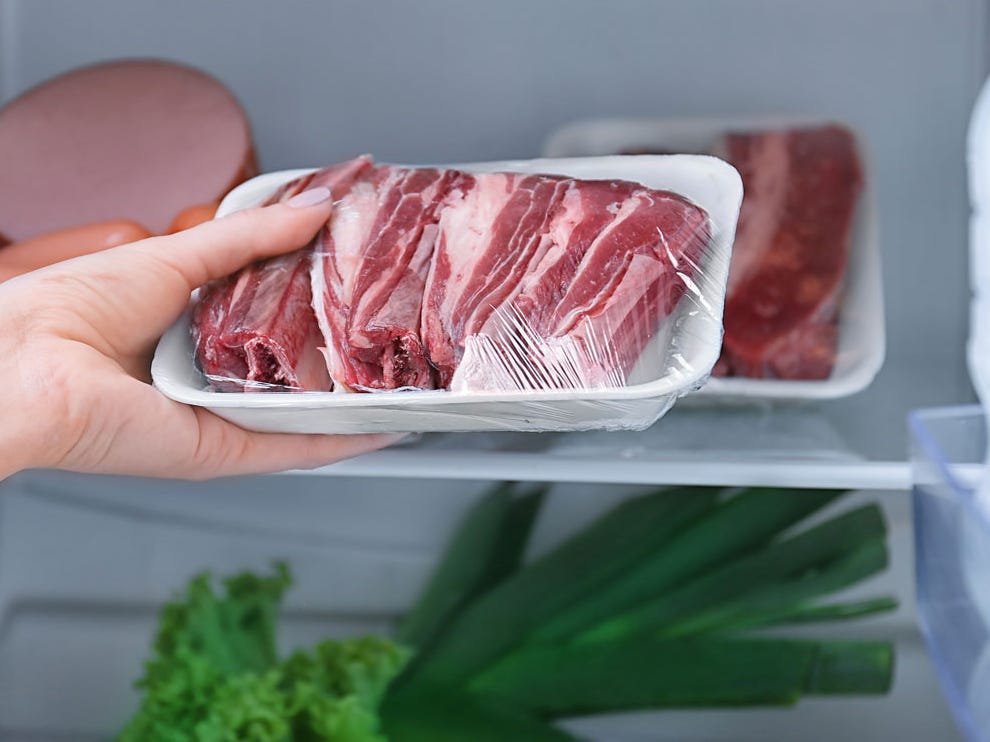 Africa Studio/ShutterstockKeep raw meat on the bottom shelf of your fridge.

Meats should always be placed on the lower shelves of the fridge and kept away from foods that don’t require any cooking, such as fruit and salad, according to Hutchings.

“When organising your fridge or freezer, you should always put raw meats at the bottom to prevent the chance of meat juices dripping onto lower shelves,” she told Insider.

Ideally, the shelves will be ordered by cooking temperature – with ready-to-eat foods at the top and raw foods on the bottom.

Leftovers need time to cool before they’re placed in the fridge, and they should be separated into smaller containers. 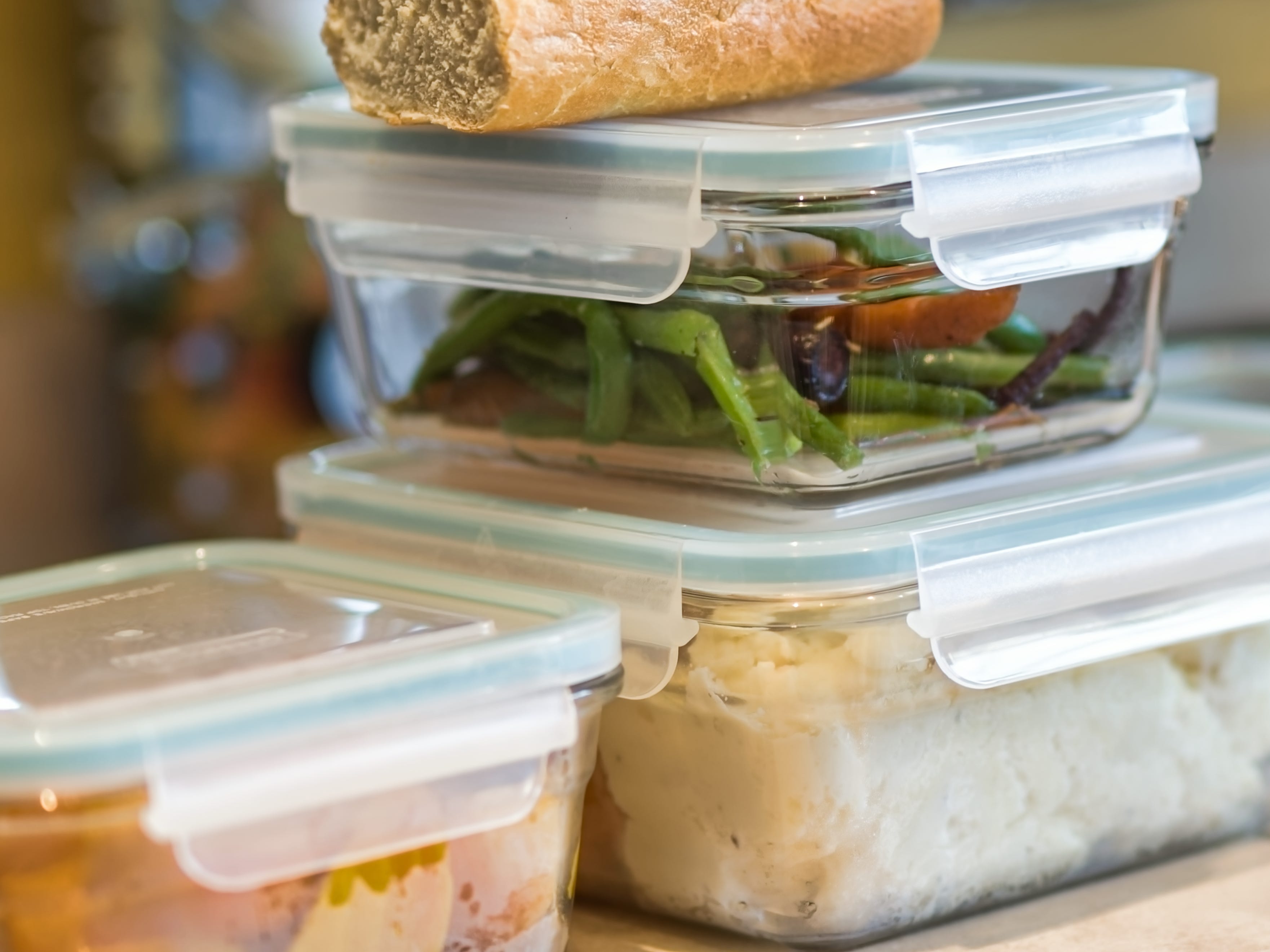 ShutterstockHot leftovers should never go directly into the fridge.

You could be shortening the lifespan of your leftovers if you place large containers of hot leftovers in the fridge, according to Hutchings.

“Large containers of leftovers can take a long time to cool, which gives bacteria an opportunity to multiply to dangerous levels,” she told Insider.

If you have a lot of leftovers, divide it into smaller containers to help it cool more quickly, she suggested.

Bacteria growth can ruin milk that’s left out of the fridge for too long. 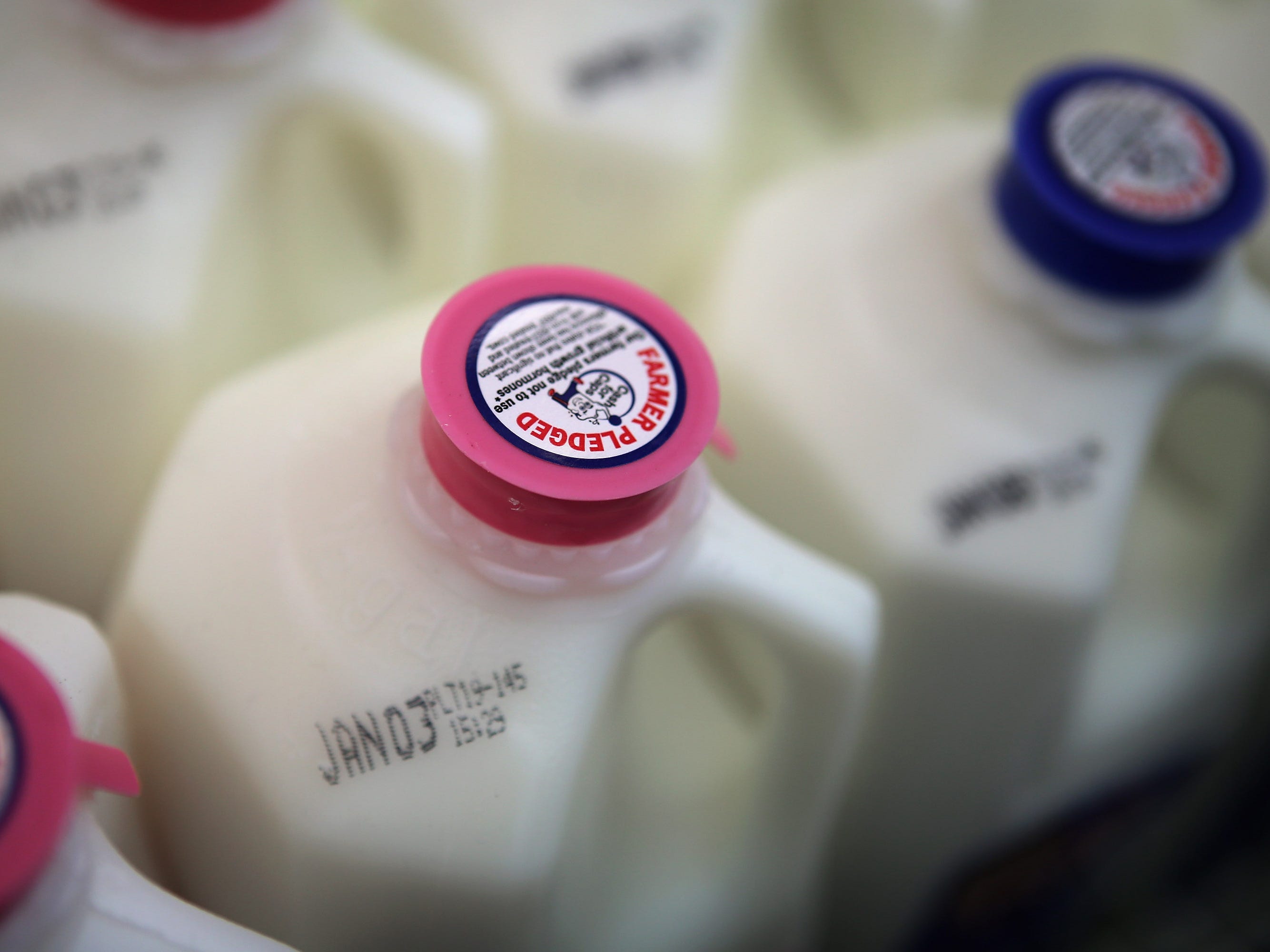 Scott Olson/Getty ImagesMilk should be kept in the fridge as much as possible.

“Get in the habit of putting milk away right after you use it,” Hutchings told Insider.

Milk is more susceptible to spoiling than other shelf-stable foods, so if you leave your milk out for too long, bacteria can grow, she explained.

Condiments can spoil faster if they aren’t properly sealed. rustycanuck/ShutterstockMake sure all the lids are securely fastened.

If you put away your dips, mustards, ketchups, or sauces without closing the lids properly, you will shorten their lifespan, according to Ross.

Make sure to screw the top on tight and always wipe off the lids before placing the bottles back in the refrigerator.