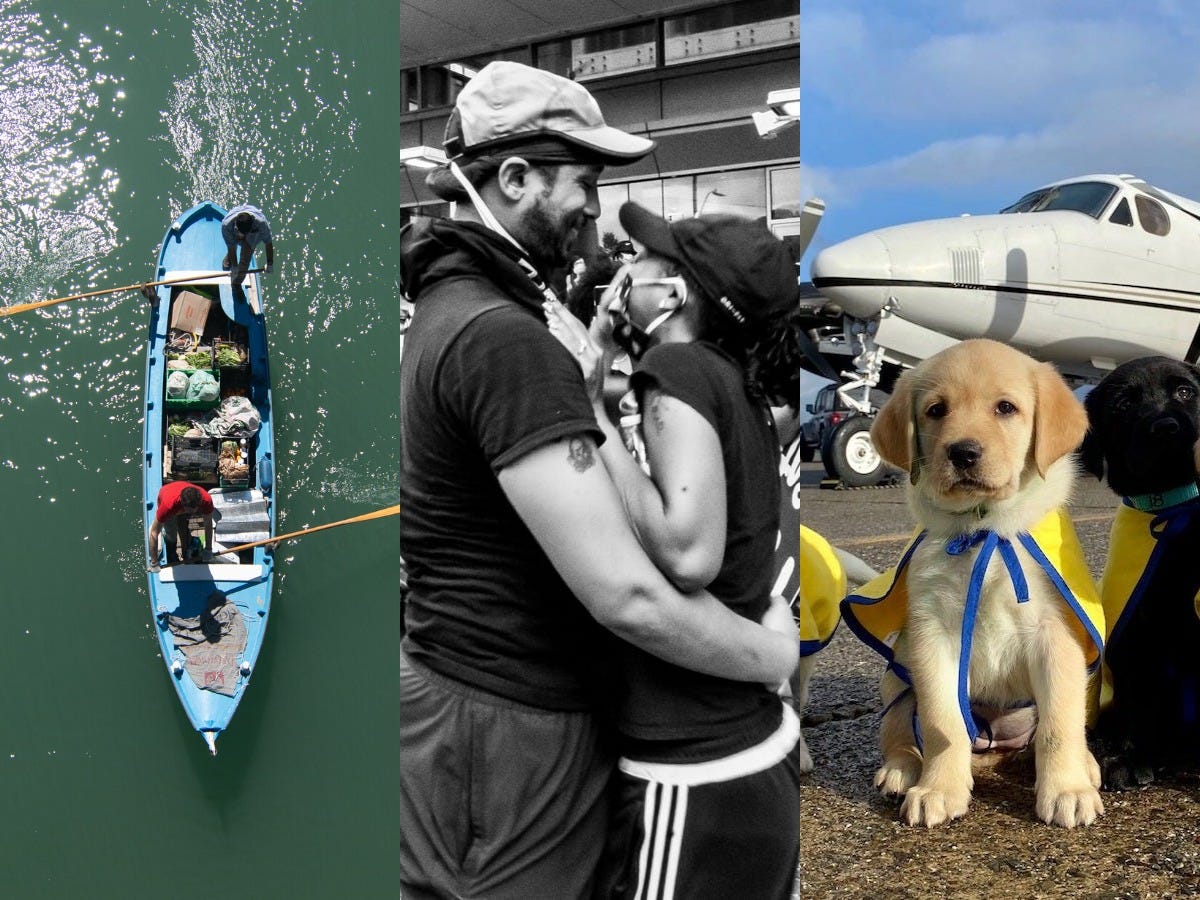 From empowering engagements at protests to neighbours looking out for one another, people around the world are bringing joy to others in surprising ways.

And in times like these, we could all use a smile.

A couple got engaged at a Black Lives Matter protest. 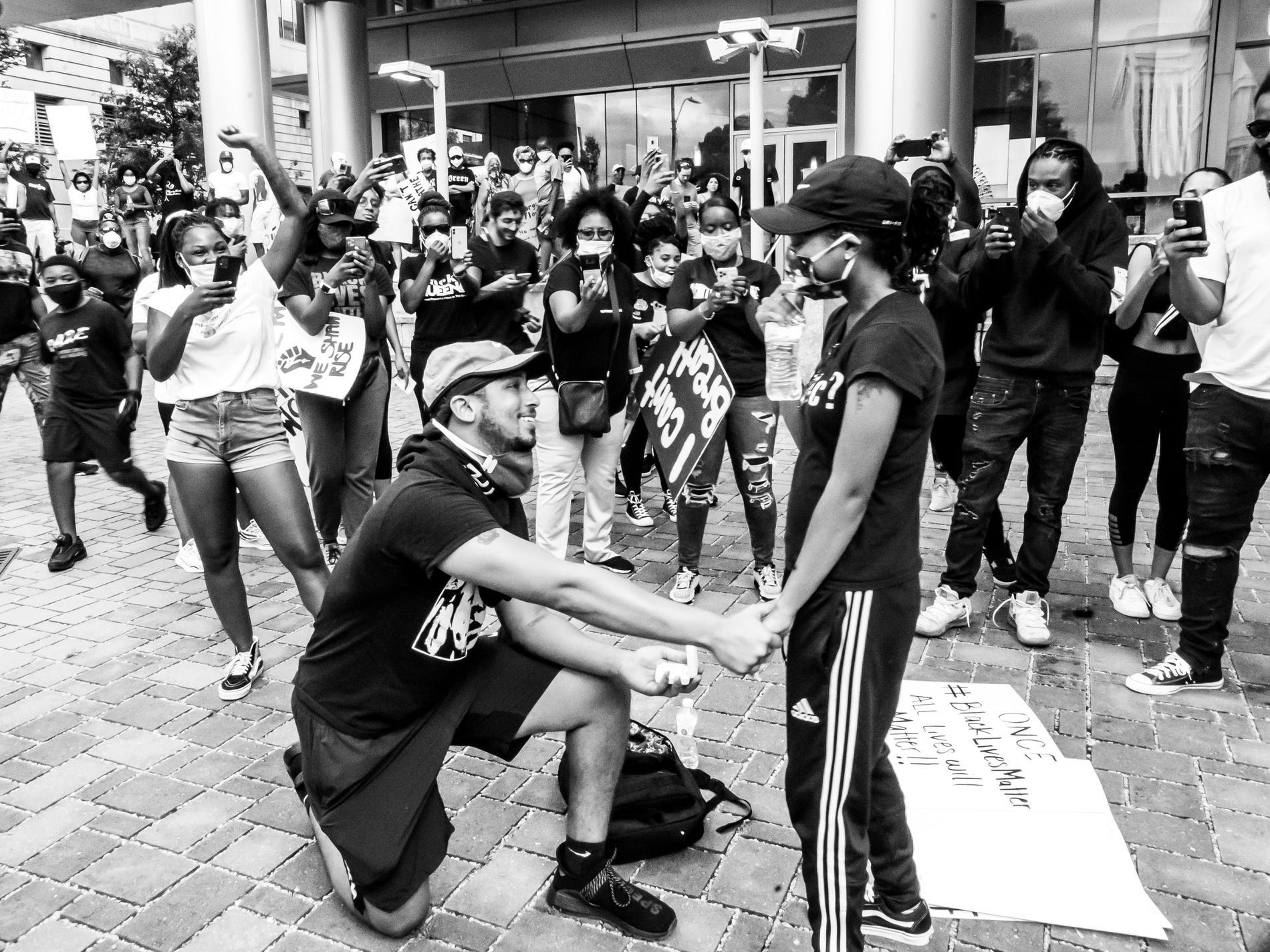 4C Visuals GroupThe couple was surrounded by their community during the proposal.

Although the protest proposal was not planned far in advance, Young decided it was the right opportunity.

The couple has been together for two years, and Alston is expecting a child. 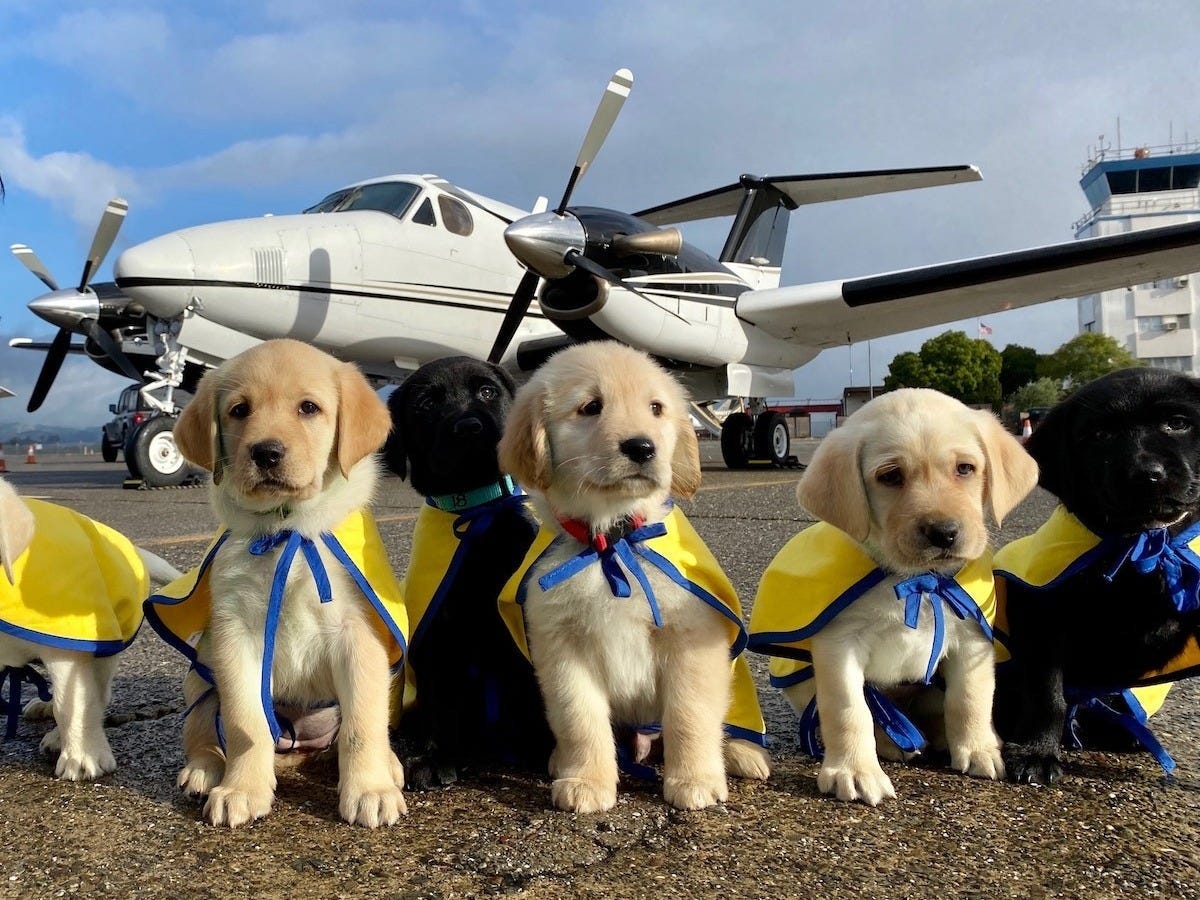 Canine Companions for IndependenceThe nonprofit provides service dogs to people with disabilities free of charge across the country.

With unreliable flight schedules due to the coronavirus, Canine Companions for Independence was challenged with finding a way to transport puppies to their trainers.

After putting out a call for support, three volunteer pilots offered up their skills and planes to help transport over 100 puppies across the West.

“These pilots have just really stepped up and allowed us to continue our mission,” Michelle Williams, the public relations and marketing coordinator at Canine Companions, told Insider. 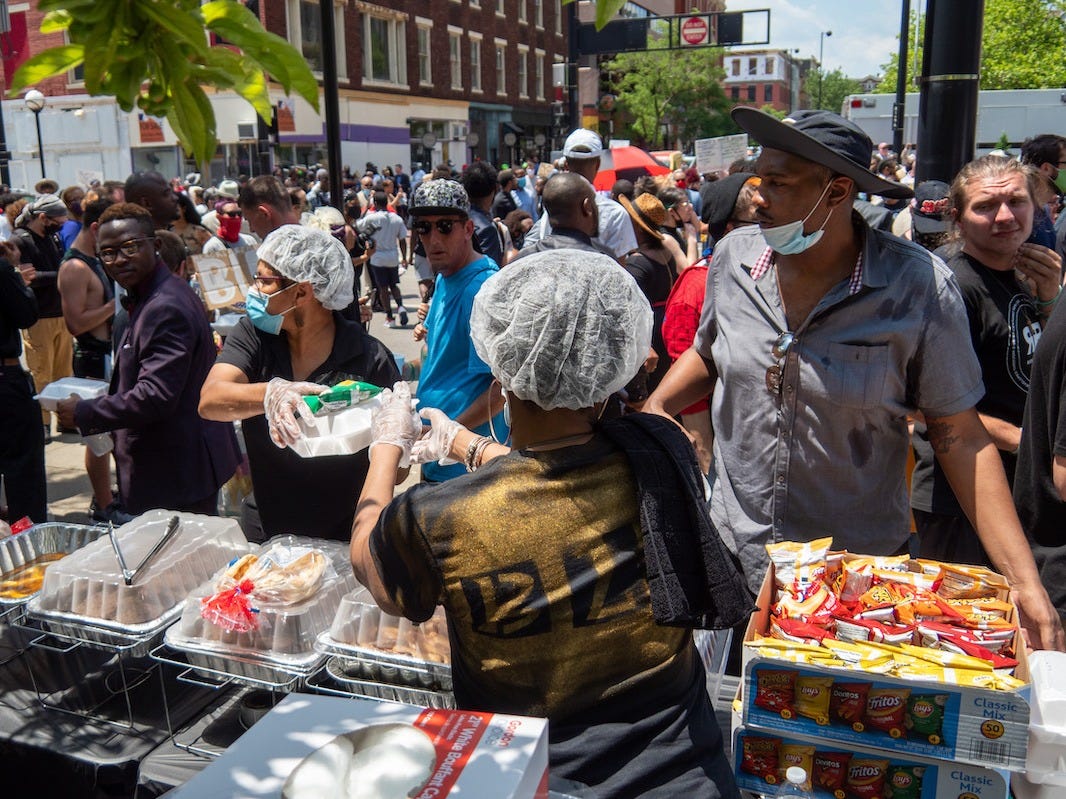 Jason Whitman/NurPhoto/Getty ImagesEvans and other volunteers handed out food and cold water to protesters in Cincinnati, Ohio.

Latoya Evans, the owner of JLTs Catering, found a way to support her community during Black Lives Matter protests.

Evans spent the afternoon outside of Hamilton County Courthouse handing out food to protesters.

While Evans typically cooks soul food, her goal at the protests was to feed as many people as possible. She handed out free hot dogs, hamburgers, chips, and water to over 400 people, according to Fox19 Now, a Cincinnati news station. 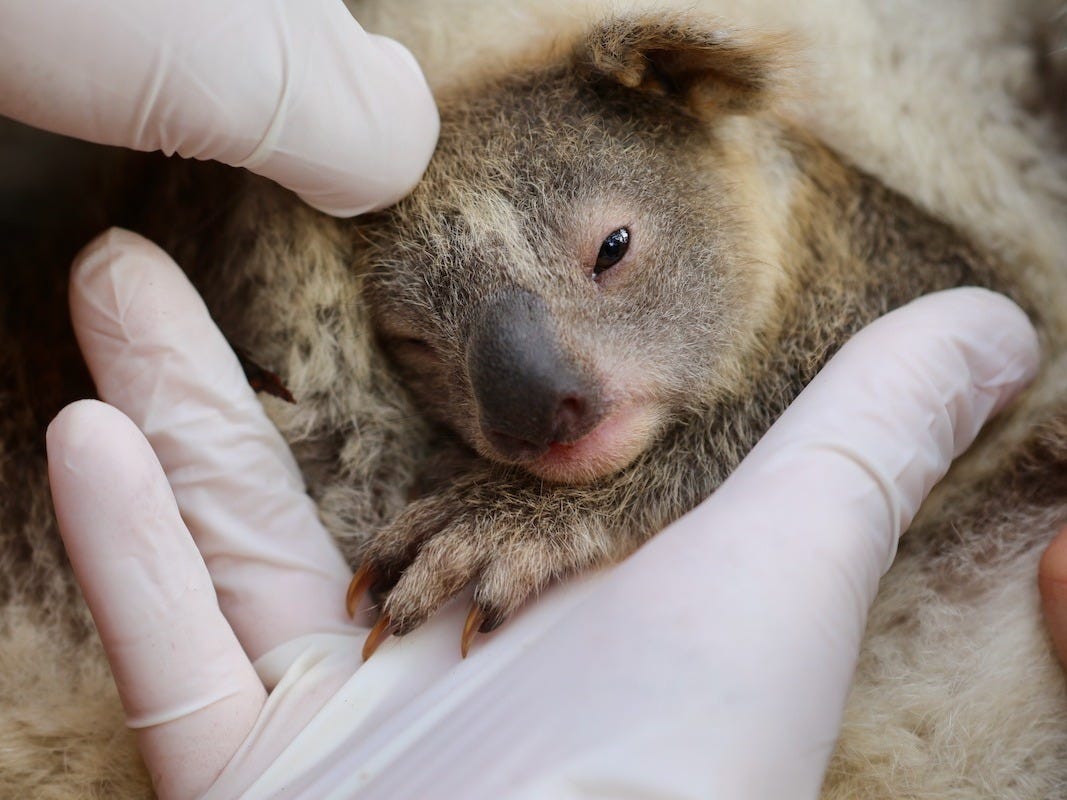 The Australian Reptile ParkAsh was born in January but was spending time in her mother’s pouch to grow and strengthen.

Aptly named Ash, the baby koala is healthy and thriving in her mother’s pouch.

“Ash represents the start of what we’re hoping to be another successful breeding season,” Australian Reptile Park zookeeper Dan Rumsey said in a statement.

Bushfires devastated the country and put its koala population at risk, so raising a strong, new generation of koalas is important for these wildlife parks.

Volunteers in London helped equip protesters with the essentials. 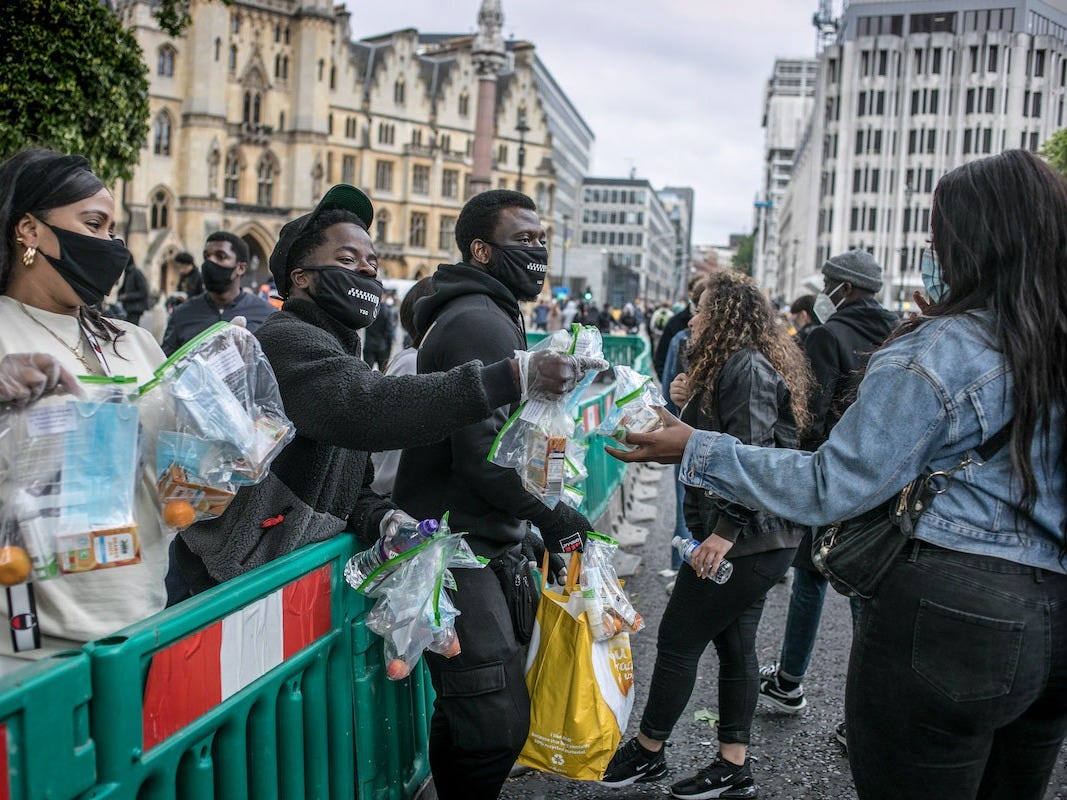 Volunteers outside of Parliament Square in London, England, provided protesters with Ziploc bags full of necessities.

Each bag contained hand sanitizer, a face mask, fruit juice, and a clementine. As thousands of protesters took part in London’s demonstrations, the bags came as a welcomed surprise.

Jennifer-Lynn Parnall performed for her neighbours every day during Spain’s lockdown. 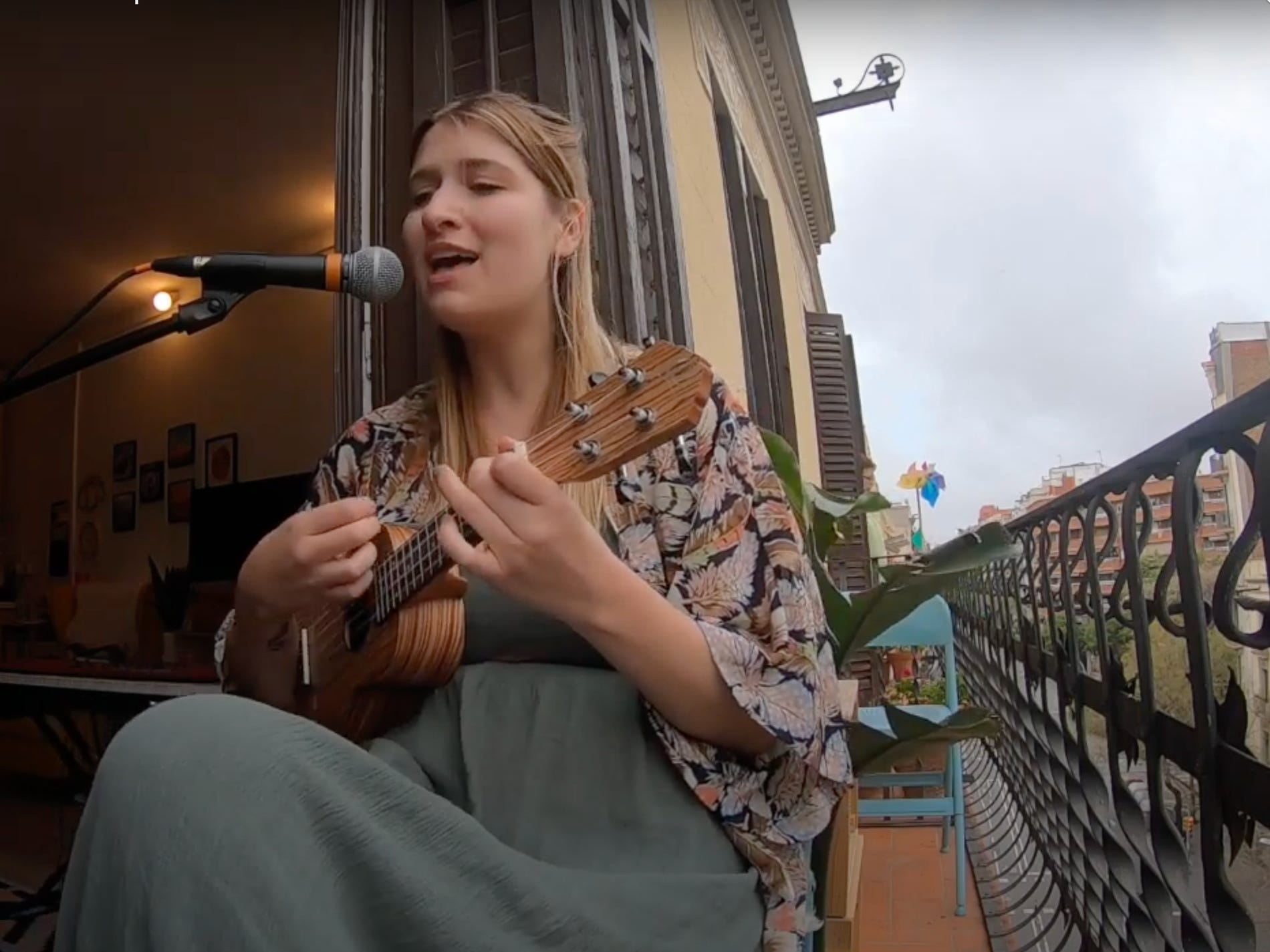 What started as a one-time performance of “All You Need Is Love” by The Beatles quickly turned into daily performances for Jennifer Parnall.

Her neighbours loved her guitar, ukulele, keyboard, and singing so much they made signs thanking her for her music.

Parnall is a music teacher in Spain, however, she’s originally from Canada. These balcony concerts helped Parnell connect with her neighbours, many of whom she’d never met before.

“It’s such a remarkable feeling. Music is such a huge part of my life and such a passion of mine,” she told Insider. “The fact that it is helping us connect and helping us communicate is probably the coolest thing ever.”

A sports broadcaster took to commentating on his dogs when sports games were cancelled. 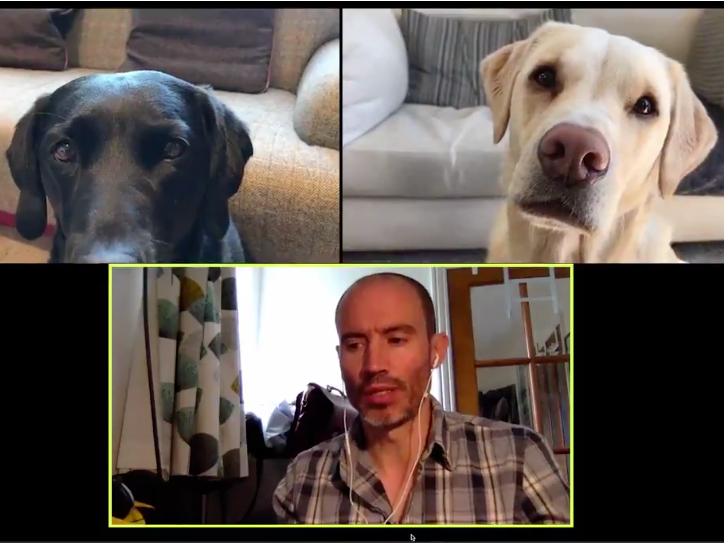 Andrew Cotter, a Scottish BBC sports broadcaster, used his free time to bond with his dogs, Olive and Mabel.

In videos he posted on Twitter, the broadcaster commentated while the dogs competed to finish their food and fight for dog toys.

His most recent video features him giving the dogs an annual performance review.

According to Cotter, the two dogs ruined the sofas and hadn’t caught a single one of the 913 squirrels they had chased. The good news? Neither dog would be furloughed during the pandemic.

Volunteers across Vietnam rallied together to feed their community using rice ATMs. 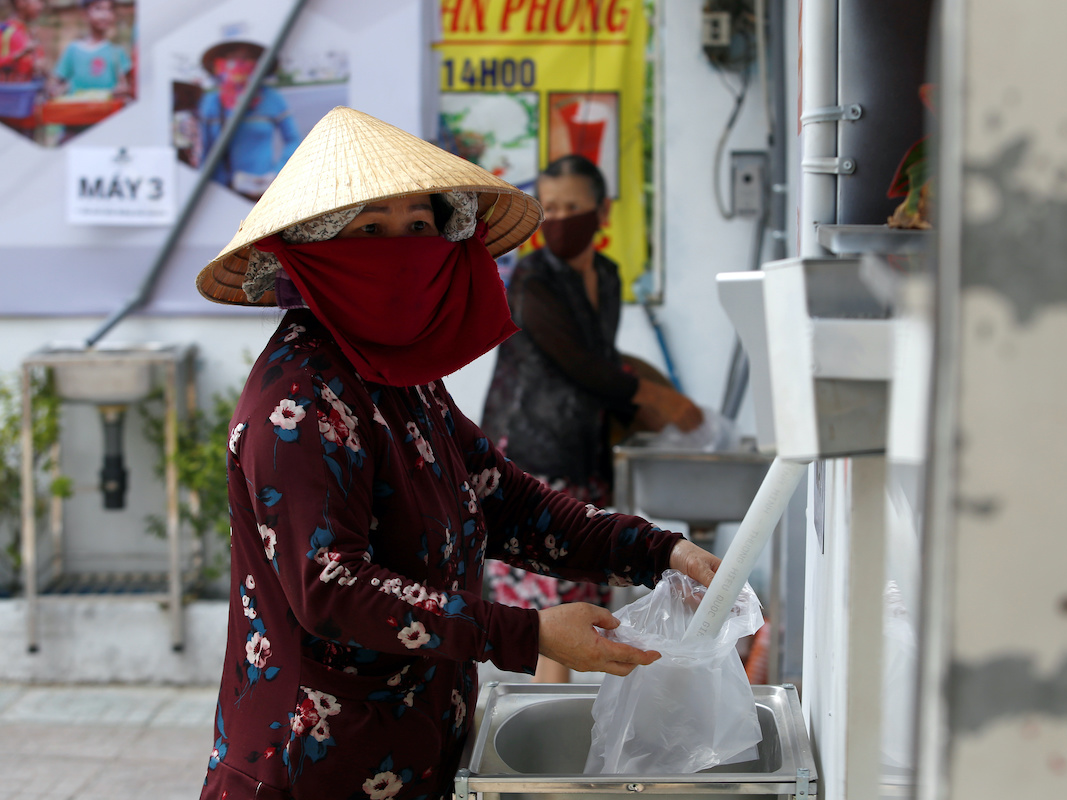 In cities across Vietnam, rice was collected and distributed out to those in need.

The coronavirus pandemic negatively impacted seniors, students, and people of all ages across the country.

Each day, the ATMs open up so individuals can collect a few pounds of rice.

Women in Venice transported groceries to residents on traditional boats. ANDREA PATTARO/Getty ImagesA woman holds fresh produce that will be dropped off at a Venetian home.

Row Venice, a nonprofit organisation made up of women rowers, took to the Venetian canals to distribute food to residents.

The group partnered with local farms to bring food to at-risk populations in their city.

The group typically participates in rowing competitions and teaches rowing classes to tourists, but both of those activities were put on pause due to the coronavirus.

The delivery service is free. Even as lockdowns begin to lift in across Italy, rowers are continuing the deliveries in their spare time.

A mum made others laugh when she used a Buzz Lightyear helmet as a mask. 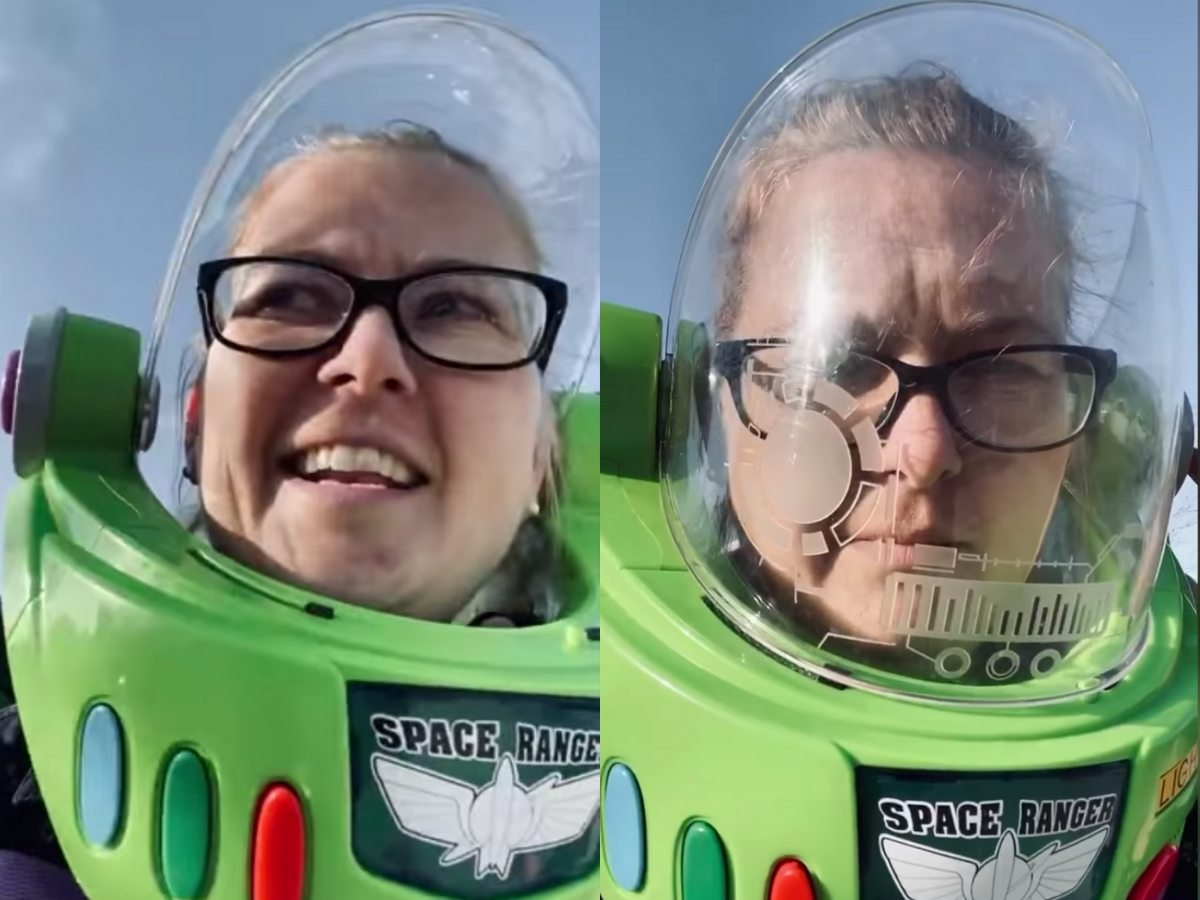 Kelly Hogan Painter/FacebookThe mum had originally purchased the helmet from Walmart and never imagined it would serve another purpose.

Kelly Hogan Painter needed to go to the grocery store to purchase food for her family of five. She knew she needed a mask, but she didn’t want to purchase any that medical staff was in dire need of.

So, she decided to use her children’s Buzz Lightyear mask.

Now, the mask joins Hogan Painter on all her errands across North Carolina. People laugh at the unusual sight and stop her to take pictures.

Neighbours kept each other company by playing games of bingo. Jon Nazca/REUTERSA woman marks off numbers from her bingo card.

When neighbours were feeling isolated in places like Spain and Ireland, they started playing bingo.

From their balconies, neighbours played the game as a way to connect while remaining physically distant.

The games went viral and other communities started playing, too.

A fluffy dog and his owner helped people virtually travel to Switzerland through breathtaking videos. 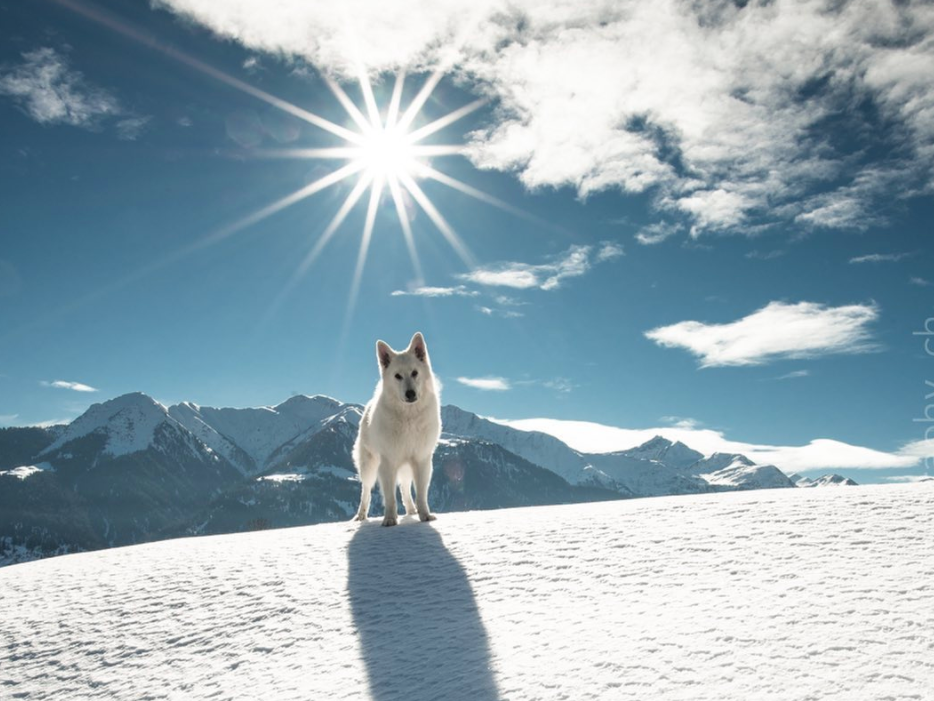 Sylvia MichelRasta is a white Swiss shepherd who loves to play in snow, swim, and gobble up flowers.

Rasta, a white Swiss shepherd, and his owner, Sylvia Michel, go on daily hikes across Switzerland.

Michel is a professional photographer and records the walks for all of Rasta’s followers. The videos have been one way for people around the world to escape to Switzerland’s waterfalls, mountains, and flower fields.

“I recognise that many people aren’t that lucky to go outside,” Michel told Insider. “People are very thankful that we show them something beautiful.” 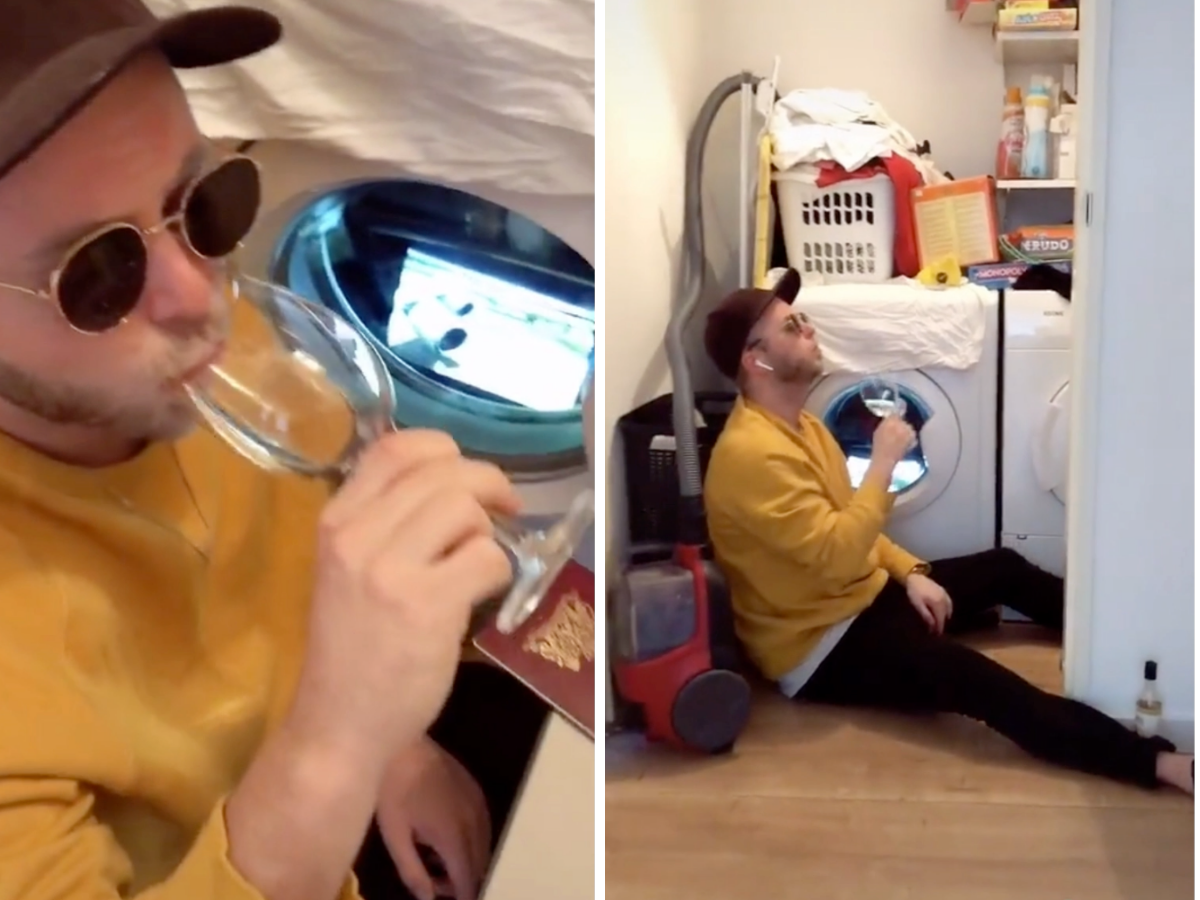 jeroengortworst/TikTokJeroen Gortworst and his boyfriend created a video in their laundry room.

Borders closed around the world and trips were cancelled. But that didn’t stop travellers from experiencing an aeroplane.

Instead, they re-created first-class airline rides from their laundry rooms.

Using a laptop or tablet, TikTok users set the screen in their washing machine, which looked similar to the view from an aeroplane window.

From there, people grabbed travel pillows, airline snacks, and headphones to complete the flight.

Hundreds of people participated in the trend and re-created their own aeroplane rides.

Nuns surprised people around the world with their basketball and mask-making skills. Marcelo del Pozo/Getty ImagesThe nuns of San Leandro are known for making Yemas de San Leandro, which are sweets made from sugar, lemon, and egg yolks.

While basketball is a sport the nuns of San Leandro in Seville, Spain, have played for years, sewing masks is a new skill.

As Spain experienced some of the highest numbers of coronavirus cases globally, the nuns pivoted their traditional baking business to mask making.

The nuns sew an estimated 500 masks each day. The masks are then distributed to hospitals, police stations, and soup kitchens across the city.

During breaks, the nuns head to the courtyard to shoot hoops.

A woman brought smiles to her neighbours’ faces when she dressed up as E.T. and Violet from “Charlie and the Chocolate Factory.” 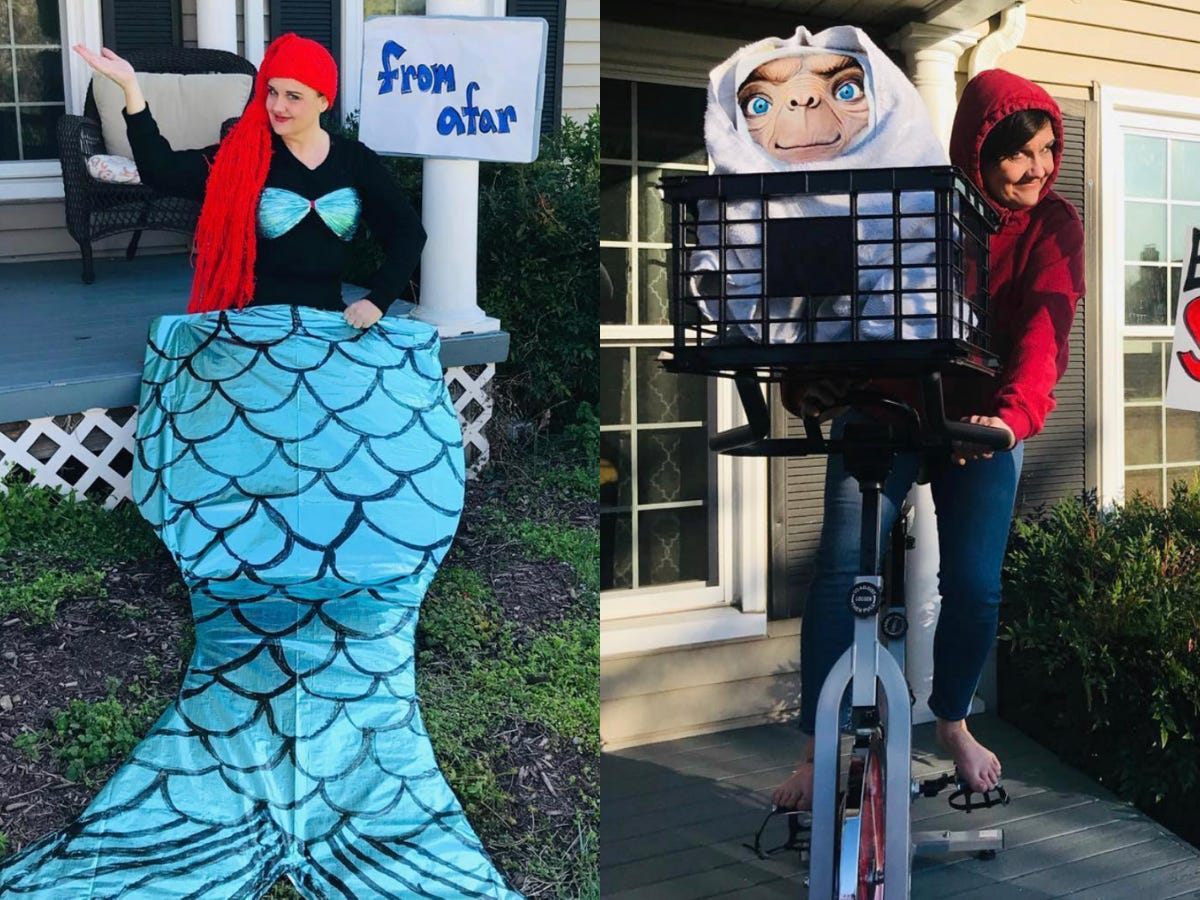 Erin KembleErin Kemble has searched her house for fun costumes to complete her porch performances.

Erin Kemble started “porch performances” for her family and neighbours during Virginia’s lockdown.

Scouring her house for materials to make costumes like Elsa from “Frozen” or Neo from “The Matrix,” Kemble steps onto her porch every day to give people a laugh.

“I’m not on the front lines, I’m not in harm’s way. I am a fool,” she told Insider. “If people can laugh and forget for one second what’s happening, it’s giving me a purpose.”

A tour guide didn’t let lockdowns stop her from sharing the beauty of London. Kaite Wignall is the creator of Look Up London, a walking tour company and blog focused on sharing London’s secret spots.

When London went into lockdown, she didn’t want to stop sharing her love for the city.

Using public pictures, videos she’s collected from over the years, and the Google Street View feature, she takes her Instagram followers to new London destinations three times a week.

Wignall told Insider that “it has changed what I think of in terms of possibilities of tours.”

A 22-year-old and her sled dogs came to the rescue when she saw seniors in her community still buying groceries during the pandemic. 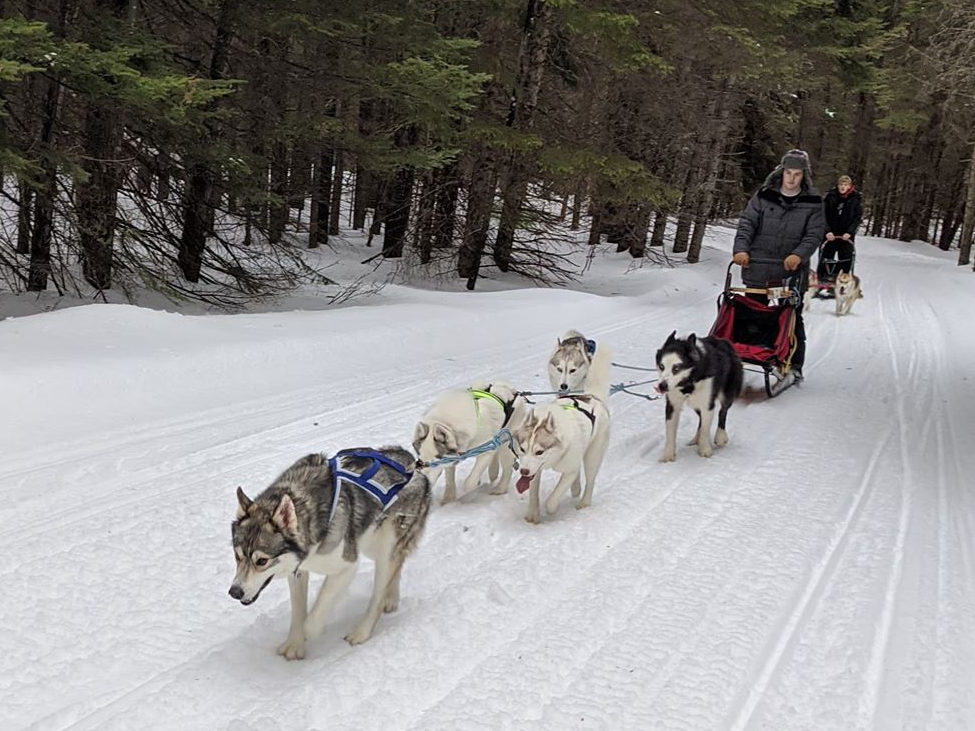 Hannah LucasThe team made four to six delivers each day.

After seeing seniors in her community buying just a few necessities at the grocery store, Hannah Lucas wanted to help.

Lucas, her two dog handlers, and her team of 12 sled dogs travel throughout northern Maine bringing groceries to those in need.

The snow has melted for the year, but Lucas hopes to continue the service next year. When San Antonio Zoo’s visitors were missing their beloved animals, the zoo launched “Zen Zoo,” which is a daily yoga practice at different animal habitats around the park.

The zoo has searched for creative ways to connect visitors with the animals. Recently, it launched a drive-thru zoo experience.

“We knew right away that we wanted to have a big social presence to stay connected to the community,” Tim Morrow, the zoo’s president and CEO, told Insider.

One woman kept travel alive by taking viewers to destinations around her bedroom. 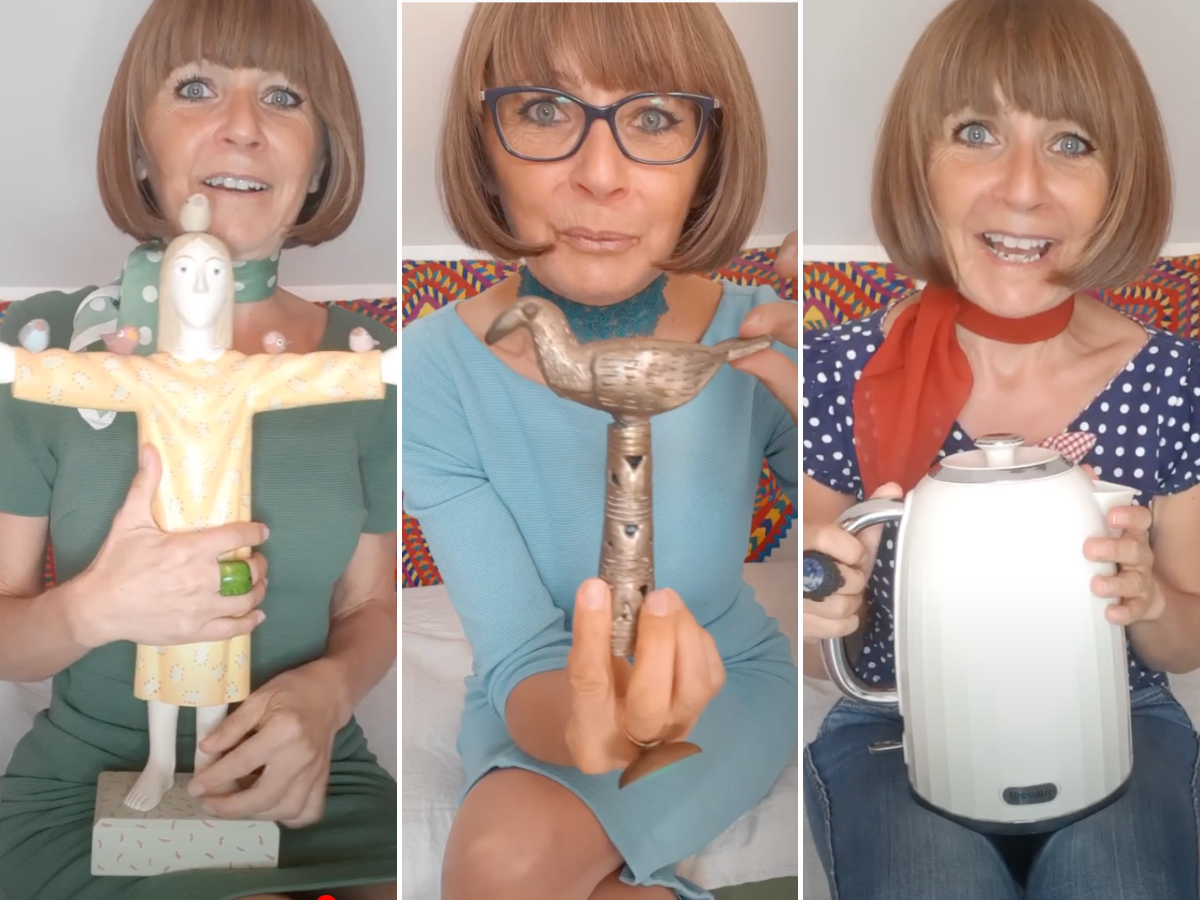 Carole FavreCarole Favre launched a video series in which she tells stories of travels through her souvenirs.

Carole Favre has travelled all around the world. At each stop, she collects souvenirs that have meaning.

When travel was put on pause, Favre wanted to keep her travel spirit alive.

She started filming a daily video series called “Travels around my bedroom.”

In each video, Favre explains the story behind one of her souvenirs and shares the history and culture of a destination.

“Especially to remember this right now – it’s such a challenging time – that it’s important to see the beauty of the world around us,” she told Insider.