A fighter nicknamed God of War scored a 1st-round guillotine choke from bottom guard, punctuating the finest year of his pro career 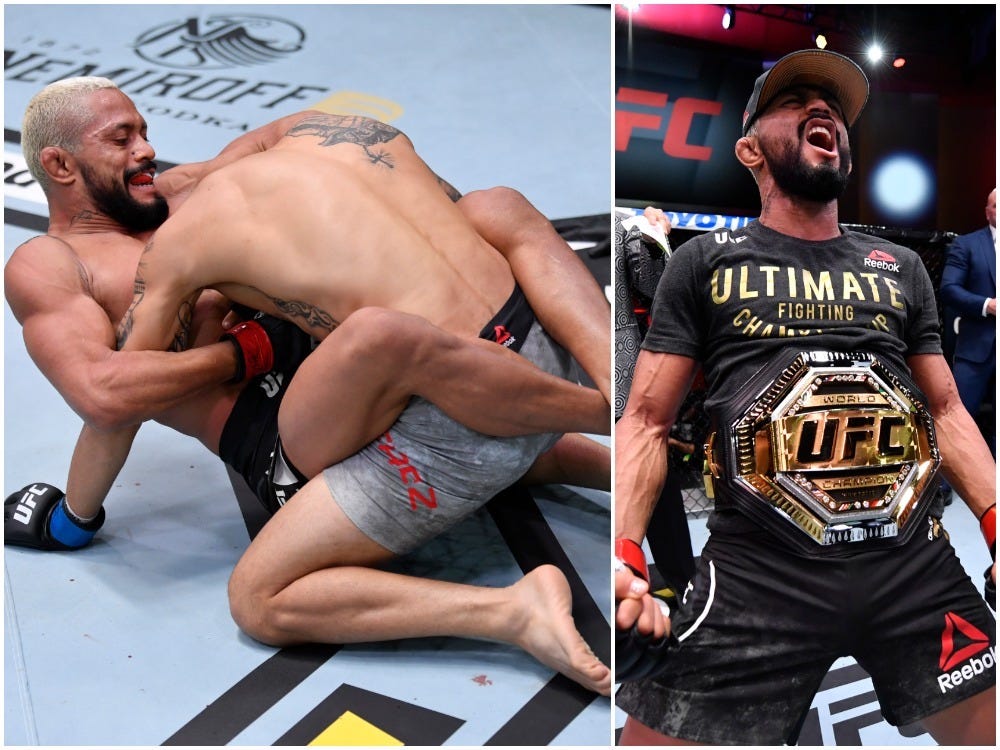 A championship fighter nicknamed “God of War” scored a first-round guillotine choke from bottom guard, punctuating the finest year of his pro career.

It was the third time Figueiredo fought in 2020, having beaten Joseph Benavidez in back-to-back bouts â€” the last of which was a bloody submission win on Fight Island in July which impressed the UFC boss Dana White so much the American promoter called it “pure violence.”

In his first defence of the flyweight title, Figueiredo needed only one minute and 57 seconds to wrap-up his win, forcing a first round submission.

“Call me master of the wizards,” he said after his victory was confirmed.

“I promised my master that I would do this, I told them that this would happen and this was exactly what I was going to do,” said the 32-year-old Brazilian. “So I trained for that and that’s exactly what happened.”

He continued: “We changed our stance because he never saw me kick in previous fights, but I knew that I could kick him, but he never had that on film.”

The win punctuates a career-best year for Figueiredo

Figueiredo has been an unstoppable force in 2020, besting Benavidez twice and swatting Perez to the side this weekend.

The fighter’s performance-level shines a spotlight on a division which could have been neglected since one former long-reigning champion Demetrious Johnson left for One Championship, and another â€” Henry Cejudo â€” retired.

But in Figueiredo, the UFC has a top tier fighter who is proving to be a well-rounded mixed martial artist and one who can tap into one of the company’s strongest markets â€” Brazil.

Figueiredo’s year to date is already strong enough for him to present a case as the Fighter of the Year, however, he is not yet done with 2020.

“I want to face Brandon Moreno, Dana make this happen â€¦ that’s the fight that I want to happen,” he said.

And Figueiredo’s wish appears to be White’s command, as the UFC seemingly intends to keep Figueiredo in Las Vegas so he can defend the flyweight championship one more time in December.

“We’re going to keep him here,” White told reporters at the post-event press conference. “He’s not going to fly back to Brazil. We’re going to turn him right around.”

Moreno has verbally agreed to the fight as well, sources said. pic.twitter.com/xINyNc3ZuE

According to ESPN, Figueiredo will fight the No.1 contender in the 125-pound weight class Brandon Moreno at UFC 256, the next pay-per-view event, at the UFC Apex.

Both fighters have verbally agreed to the bout agreement, the sports network reported Sunday.

Joaquin Buckley scored another highlight-reel finish, and seals his reputation as one of UFC’s most artistic knockout strikers

2 UFC debutants were given $US50,000 bonuses for fighting at an extraordinary pace, throwing 236 strikes in the 1st round alone